£104,729 when new
Read why you can trust our independent reviews 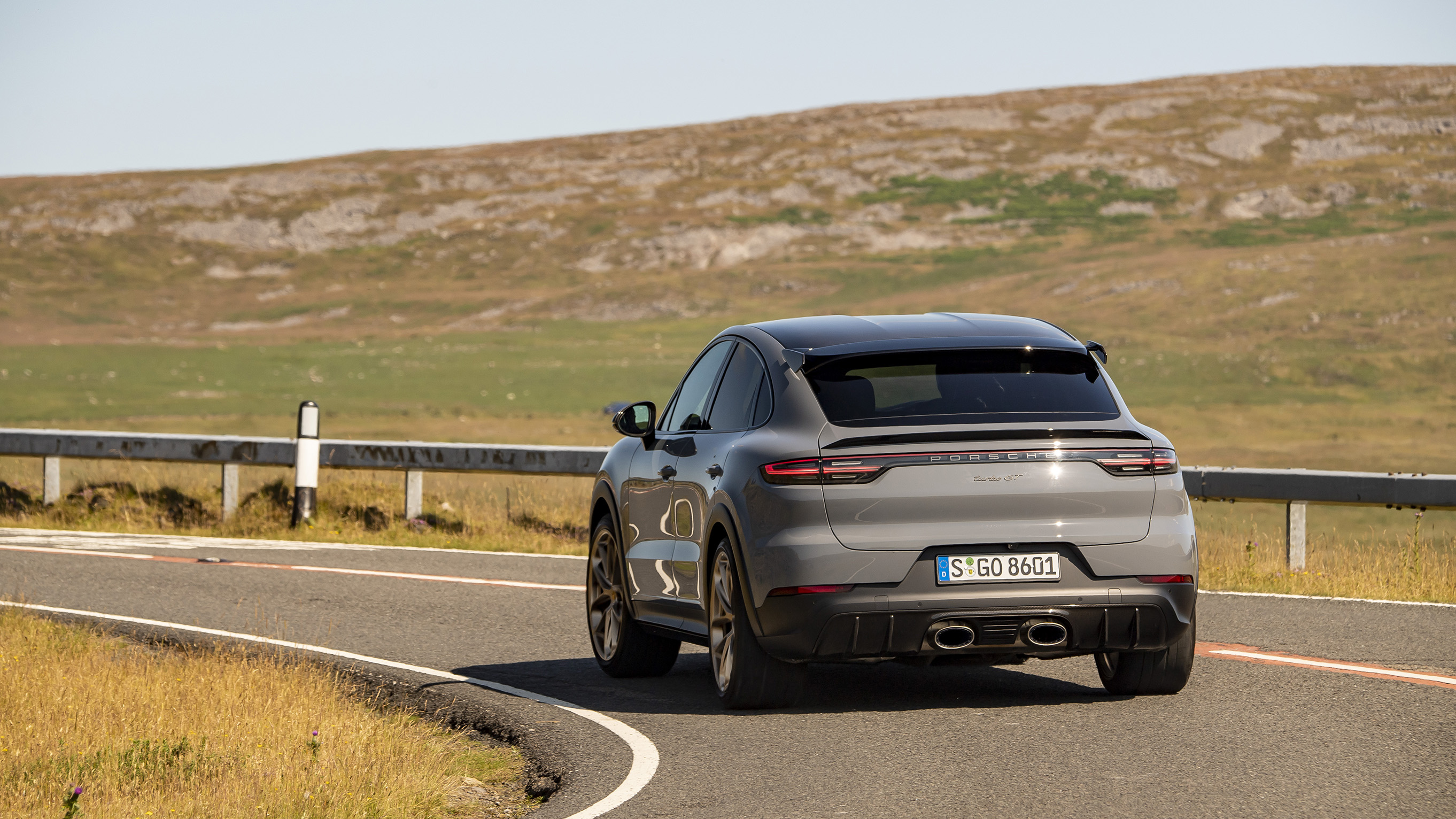 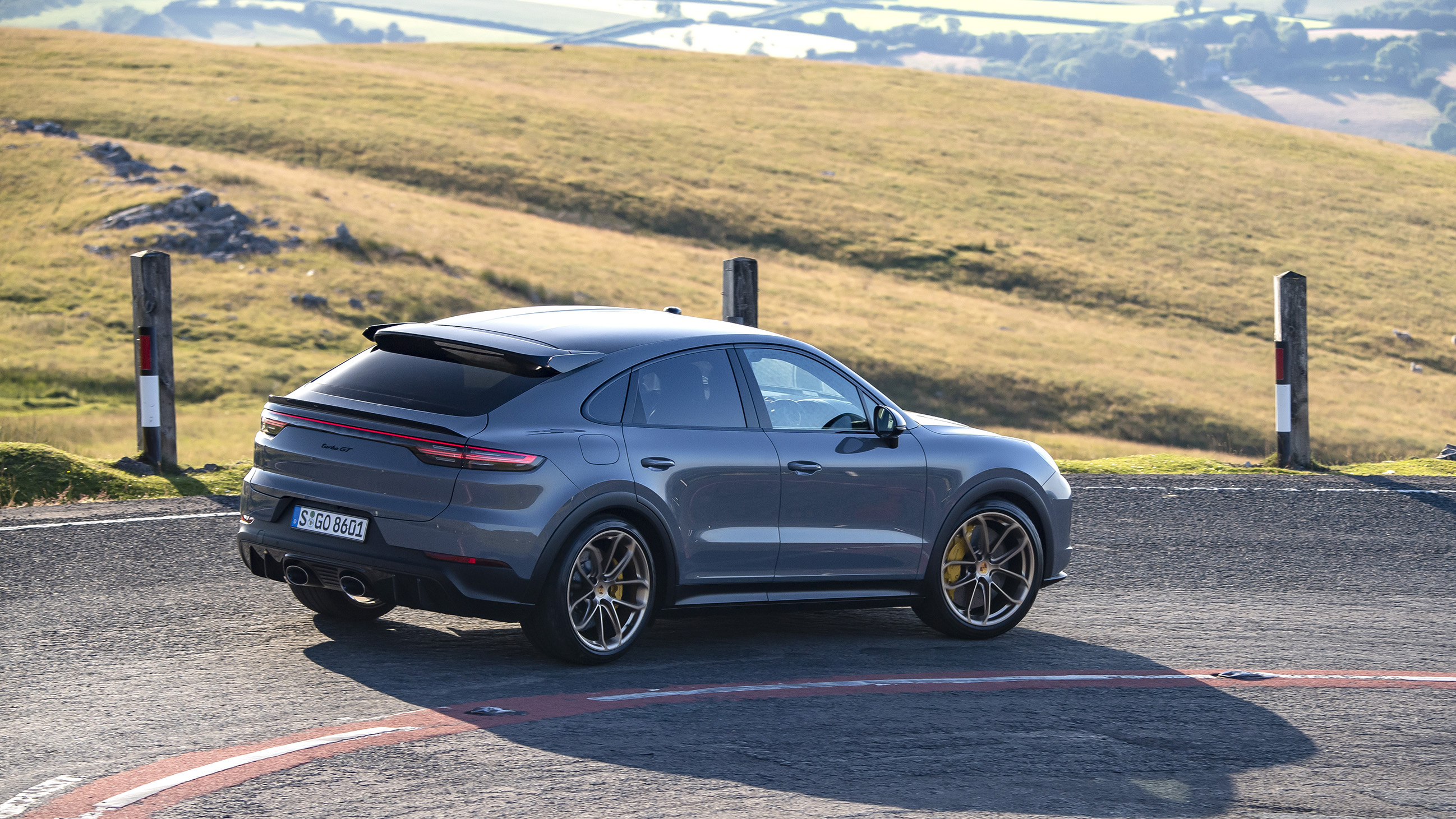 Apparently, those funny carbon Shrek ears either side of the roof spoiler – and the 25mm-longer ducktail on the pop-up rear wing – aren’t just visual shorthand for ‘I’ve bought the most expensive non-hybrid Porsche Cayenne’. Apparently, they make actual downforce. Apparently.

Not of the claims, more of the reason for them being made at all.

Porsche says at its 186mph v-max, the Cayenne Turbo GT’s glossy winglets and vanes squash it 40kg harder into the surface of the road.

Now, Porsche doesn’t say how much lift this behemoth would generate without them, but I bet it’s not 2,220kg, which is what this mega-SUV actually weighs. Surely it doesn’t need upside-down wings to make it heavier still when it’s doing three miles a minute?

Back up a sec. What’s a Cayenne Turbo GT? A stripped out GT3 RS on stilts?

Not exactly, but the ‘GT’ badging lets on this is the most driver-focused Cayenne ever. It isn’t the most powerful: that honour remains with the Cayenne Turbo S e-Hybrid, which teams a version of this car’s 4.0-litre bi-turbo V8 with an electric motor to develop just shy of 700bhp.

Without any electro-boost, but thanks to a comprehensively uprated V8 featuring stronger pistons, rods, a beefed-up timing chain, a tougher crankshaft and a tickle more boost pressure, this one makes do with 631bhp. That’ll suffice. 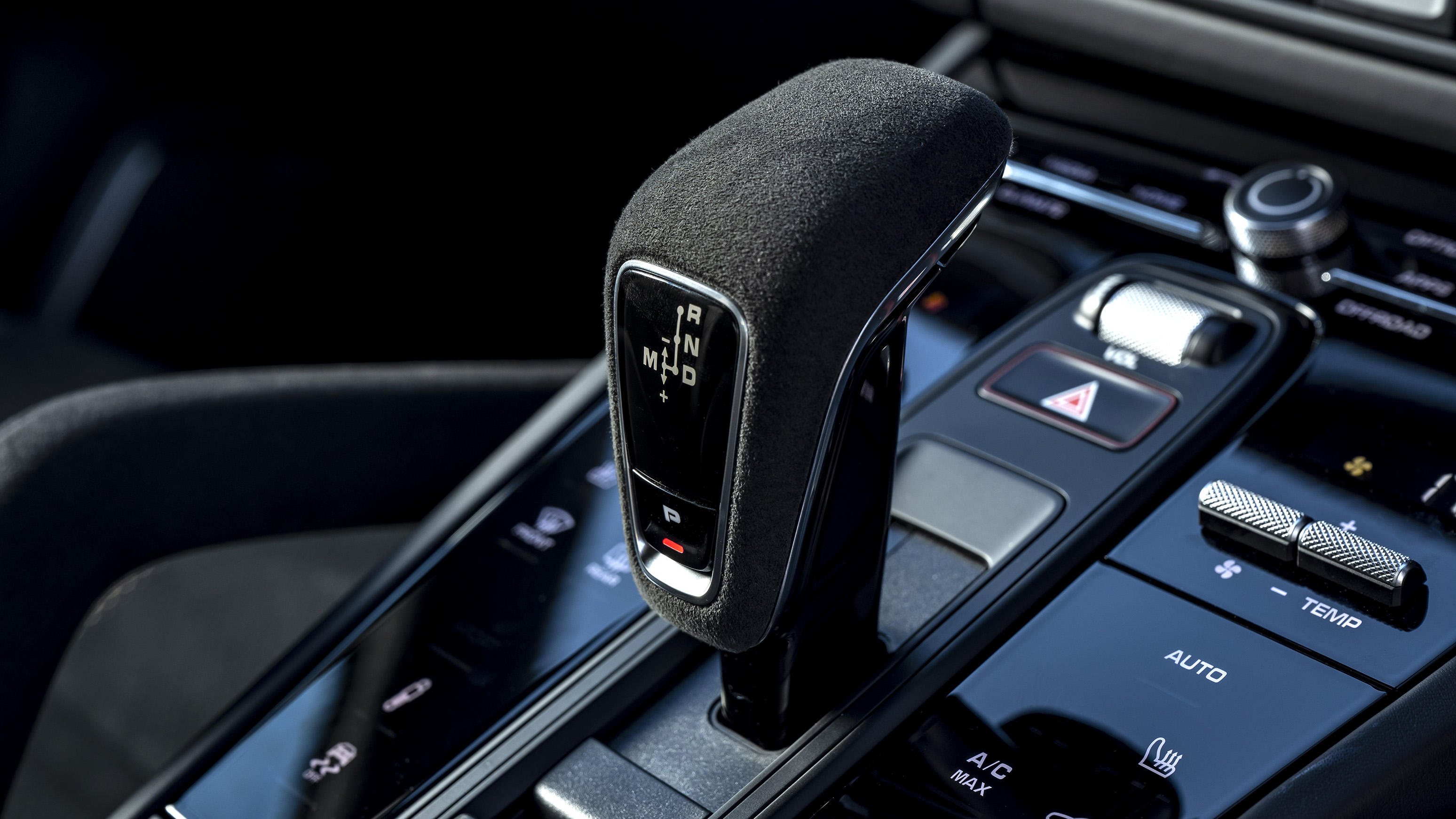 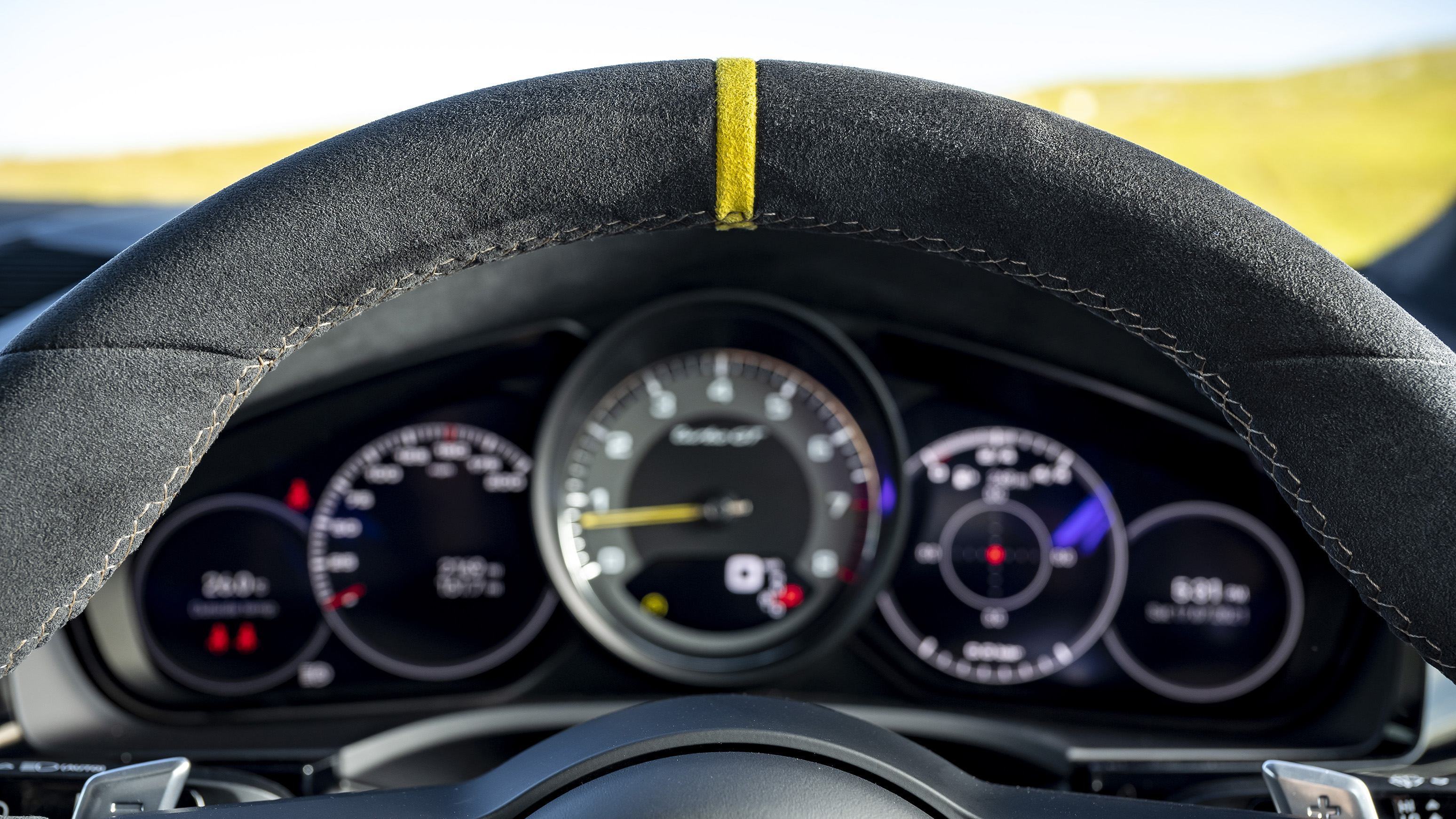 Seems like Numbers O’Clock to me. Let’s have ‘em.

Besides the 89bhp lift versus a standard Cayenne Turbo, torque has rocketed from 568lb ft to 627lb ft. 0-62mph falls from a silly 3.9 seconds to a downright ludicrous 3.3 seconds.

Since you ask, the official Nürburgring lap time is 7mins 38.9 seconds, which is a record for a family SUV. Quicker than a Bugatti Veyron around the Green Hell, this thing.

So it’s really fast then?

It’s now beyond ‘fast’. The Turbo GT dwells up in the ‘this really shouldn’t go like this’ stratosphere of silliness.

The revised engine doesn’t sound dramatically fierce when it wakes up, breathing out of new titanium centre-exit tailpipes. But coax it into Sport Plus mode, bury the throttle and the Turbo GT flies. The engine absolutely rips from 4,000rpm to just shy of 7,000rpm, delivering unrelenting shove and a slightly hoarse brrraaaap soundtrack instead of a melodic V8 gurgle.

Though the eight-speed gearbox has been beefed up to cope with the engine’s new muscles there’s still a pause – a momentary interruption – on upshifts. I’ll forgive that. The loads going on inside the transmission are the sort of forces that gods use to make planets, and the pay-off for not using a twin-clutch system is the Turbo GT oozes about town more politely.

Porsche usually points out that Cayenne buyers like a proper auto because it’s better for towing too, but ain’t nobody going to be hooking up the horsebox when there are blue-tinted titanium pipes in the way.

Which is why Porsche’s been to town on the way the Turbo GT does corners too. The anti-roll, eff-you physics software that keeps the Cayenne level in bends has been rewritten, the steering has a new map, and even the rear-steer has had to be honed to keep up with what’s going on up front.

On a British road, this firstly manifests itself as a more taut ride that we’re used to in a Cayenne. Not uncomfortable, never harsh, but you’re more aware of what the 22-inch rims are up to. Let’s call it ‘informative’.

Too much for the road?

I wouldn’t bother with Sport Plus mode for the ride unless you fancy catching impromptu airtime, but Sport mode is tolerable and conjures new swearwords from your imagination as your tiny mind tries to wrap itself around the cornering speeds this car can achieve. They’re not just silly for a 2.2-tonne 4x4. They’re downright preposterous for ‘a car’.

Carbon-ceramic brakes are now standard too, and are so monstrously powerful that even when your wider tyres are all sticky and up to temperature, jumping on the stop pedal will give the ABS a tantrum as it fights to stop all four wheels locking up. Needs more downforce. Ahem…

And, should you be skim-reading looking for a totally pointless piece of road-testing advice, then here it is, folks. Even in the dry, with all the safety police electronics switched on, on fresh tyres, it’ll unstuck the back axle on the exit of a turn. Which isn’t alarming at all, if you’re used to feeling a tower block sway in an earthquake.

As usual, the Cayenne does an impression of a hot hatch with ‘roid rage better than it has any right – or need – to.

Ageing none too badly for a car that, at heart, has now been with us for four years. Great touchscreen, well-resolved and multi-configurable instruments, spot on driving position, and exemplary build. The Cayenne’s cabin feels – awkwardly – more expensive than a Lamborghini Urus’s plasticky, toylike cabin. Which is just as well, now Porsche is asking £144,000 for one.

Sure, it’s incongruous to be sat at altitude gripping a tiny Alcantara steering wheel topped with a cheery yellow centremark. Someone’s also given a lick of red paint to the ‘overtake everything now’ boost button on the mode switcher. It screams ‘prod me’.

Those are the only splashes of colour, mind you. You’re surrounded by monochrome moleskin textures and lashings of carbon fibre fillet. The ambience deeply wishes it was a GT3 RS, but instead of a roll cage there’s space for four adults beneath the carbon fibre roof (the Turbo GT is only sold in rakish Coupe flavour).

Pity the pop-up rear wing invades rear visibility at 70mph, trimming it from ‘narrow’ to ‘useless’.

I wonder if this is a bit more than a simple ‘the Cayenne’s getting on a bit, let’s pep it up with more power’ move from Porsche. It’s an experiment, as the fast SUV landscape is changing quickly.

While the Cayenne used to have the game to itself, it’s now got relatives from Bentley, Audi and Lamborghini to contend with, and newcomers like the Aston Martin DBX to fend off. Next year, we’ll see Ferrari’s idea of an SUV for the first time ever.

What Porsche has in its locker is rally pedigree and a lot of heritage and respect in the ‘GT’ badge. This Cayenne isn’t a pedigree product of the same Weissach skunkworks that brings you the 911 GT2 and GT3. It’s said to ‘have the blessing’ of the GT department.

Hmmm. I’m sure there’s plenty of merch that serious artists have ‘given their blessing’ to over the years.

I wonder if it’s just a toe in the water to see bow the faithful react, should this ‘GT-all-the-things’ technique become a business avenue Porsche fancies exploring in years to come.

(Note: specs are for the Cayenne Turbo)