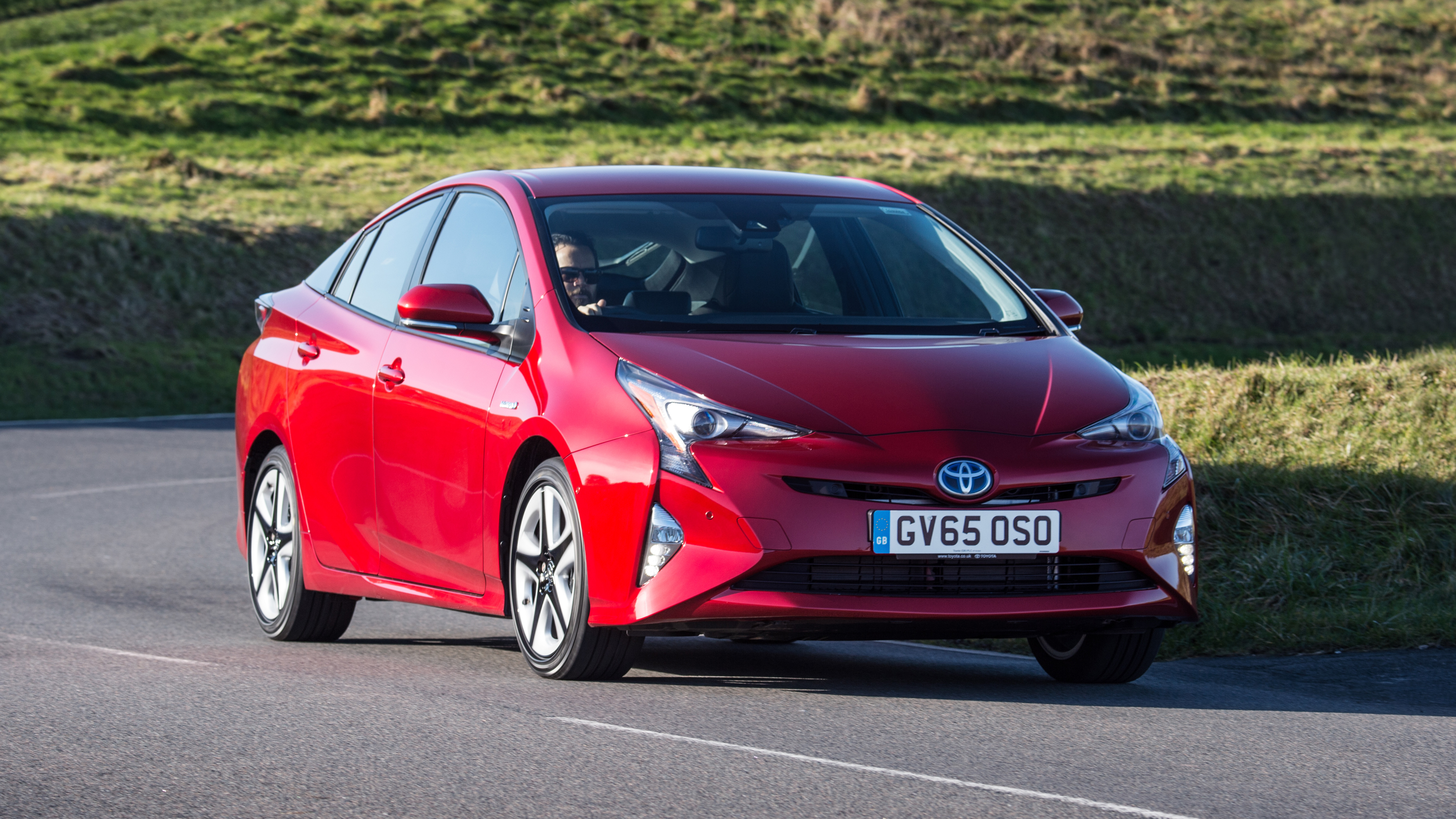 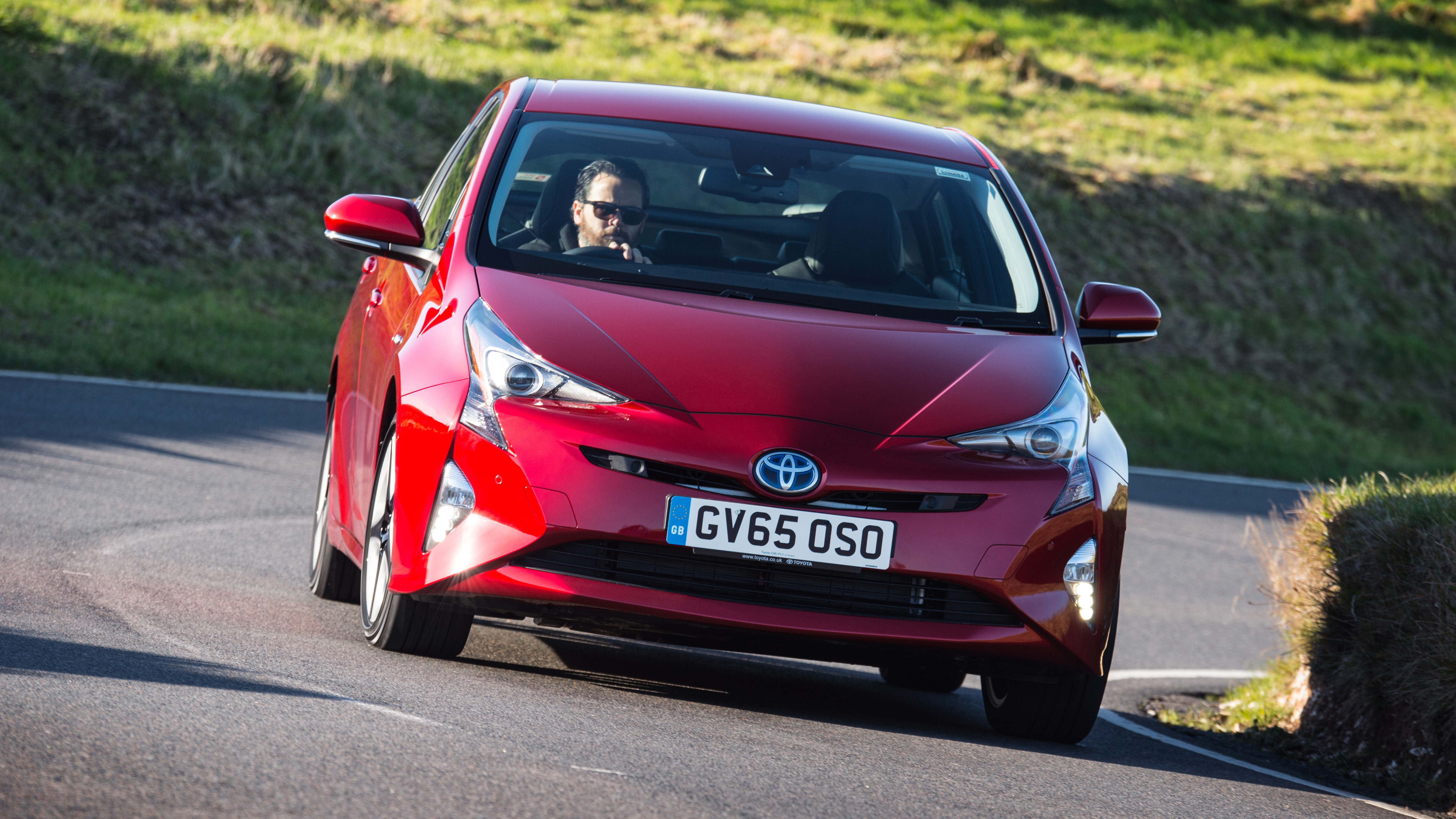 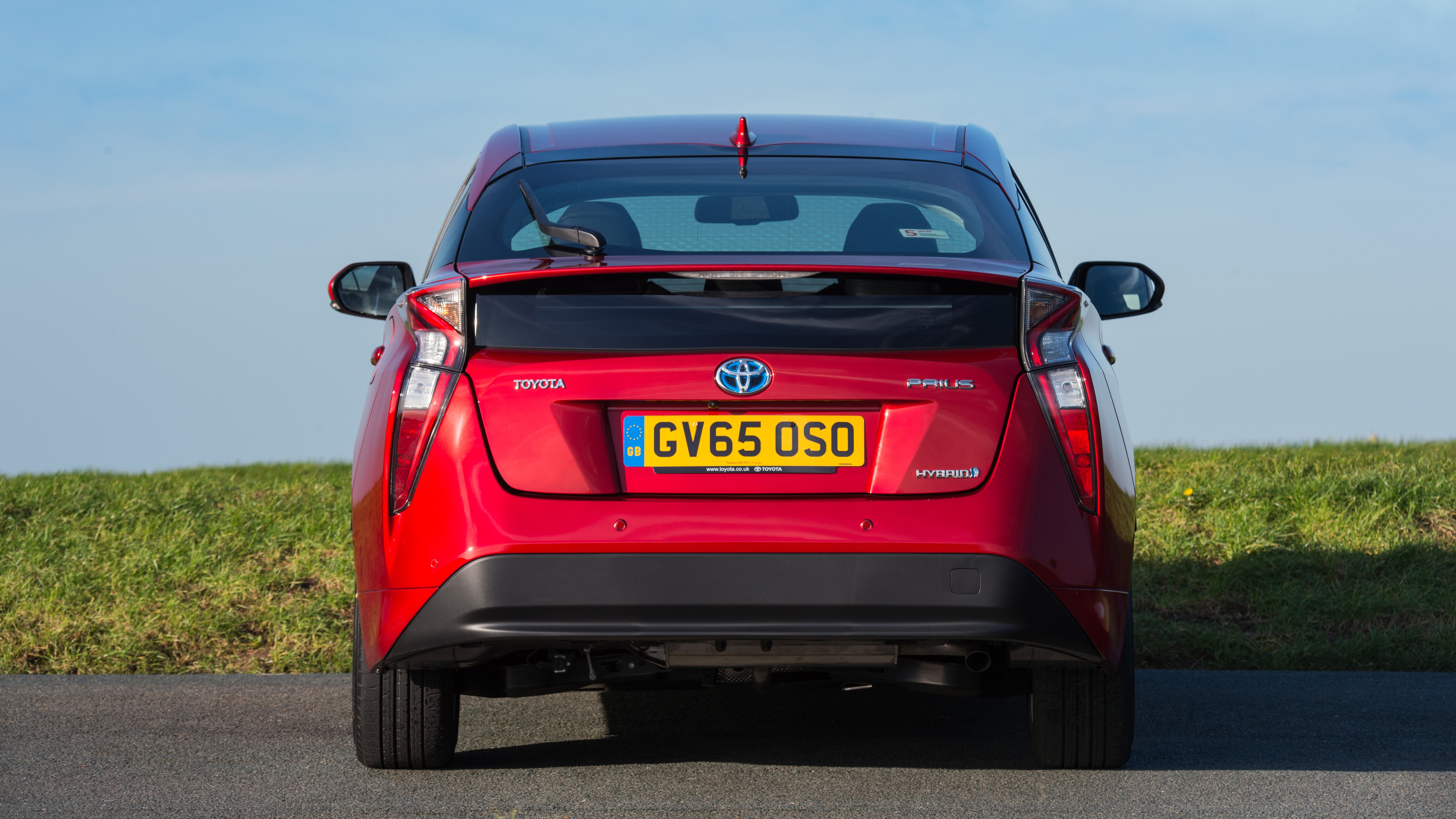 The rather edgily styled new Toyota Prius. Like the hydrogen-fuelled Toyota Mirai, the new Prius majors on aerodynamic slipperiness. And if you’re into your drag coefficients, you’ll be pleased to learn the Prius has a 0.24 Cd factor of drag. Toyota claims that as ‘world-class’, but not ‘world best’ – that trophy remains in the Mercedes CLA’s cabinet. Still, the Prius ties with something called the Tesla Model S. Reckon Elon Musk is worried?

Does the styling, um, calm down inside?

Yes. It’s a mixture of standard Prius design traits (the blank dashboard ahead of the driver, with a central pod housing the speedo and active motor more in your line of sight) and some Mirai garnish. Things like the glossy dashboard ‘tablet’ where you’ll find the main sat-nav screen and neat climate controls.

There are even a few nice flourishes, too. The air vents have coloured bezels, and the door trims’ concave scallops sweep around into the doors. It’s had some thought lavished on it, and the effect is rather pleasing.

The new Prius teams an electric motor with a petrol engine but doesn’t give you the option to separately charge up the battery from a wall socket when you’re parked. There will be a plug-in model later in the car’s life, but the car we’re driving, complete with the stunning near-100mpg claim, isn’t it.

Aside from its slipperiest-ever suit, the Prius has an entirely new hybrid system and a record-breaking engine to thank for its claimed efficiency. The 1.8-litre four-cylinder engine is 40 per cent more thermally efficient – beating the 38.5 per cent record set by, you guessed it, the old Prius.

Then you’ve got smaller, lighter but stronger electric motors, a 20 per cent drop in driveline friction, and a lighter, improved, 10 per cent shrunken battery. The air-con has got smarter too, taking into account how many bums are on seats and if any windows are open, before piping cooled air into the cabin at the expensive of those precious m-p-gs. Toyota calculates this alone creates a 2.5 per cent fuel saving.

Toyota reckons this new Prius is more engaging than its predecessor. Part of this new found verve is supposed to be found in the structure – it's 60 per cent stiffer than before, thanks to the TNGA (Toyota New Generation Architecture) modular platform. The new car is a tad longer and wider, but slings its centre of gravity 250mm lower than before, and is less lofty overall. Toyota has also worked up the hybrid system to behave a bit more like a conventional auto.

The idea is that when you accelerate, the electric motor properly cuts in to boost acceleration. Inside, the driver sits a whopping 55mm lower (so it’s more car-like), and the steering column has even been reangled downwards. Mmm, racey.

A better driving position, more conscious drivetrain, less weight – have we got a fun hybrid?

In a word, no. But we do have a car that’s a major improvement on its predecessor, and that’s very good news. Those gains have been made in clever ways, too. On a gentle throttle, the car does surge a bit more willingly than before – you can tell the e-motor has been told to get its act together. Add more accelerator and for where the car will mostly be used – in town – it’s a healthy step.

The driving position is a major thumbs-up too. It’s got comfy seats, and you’re more integrated into the car, rather sitting on top of it, people-carrier style. 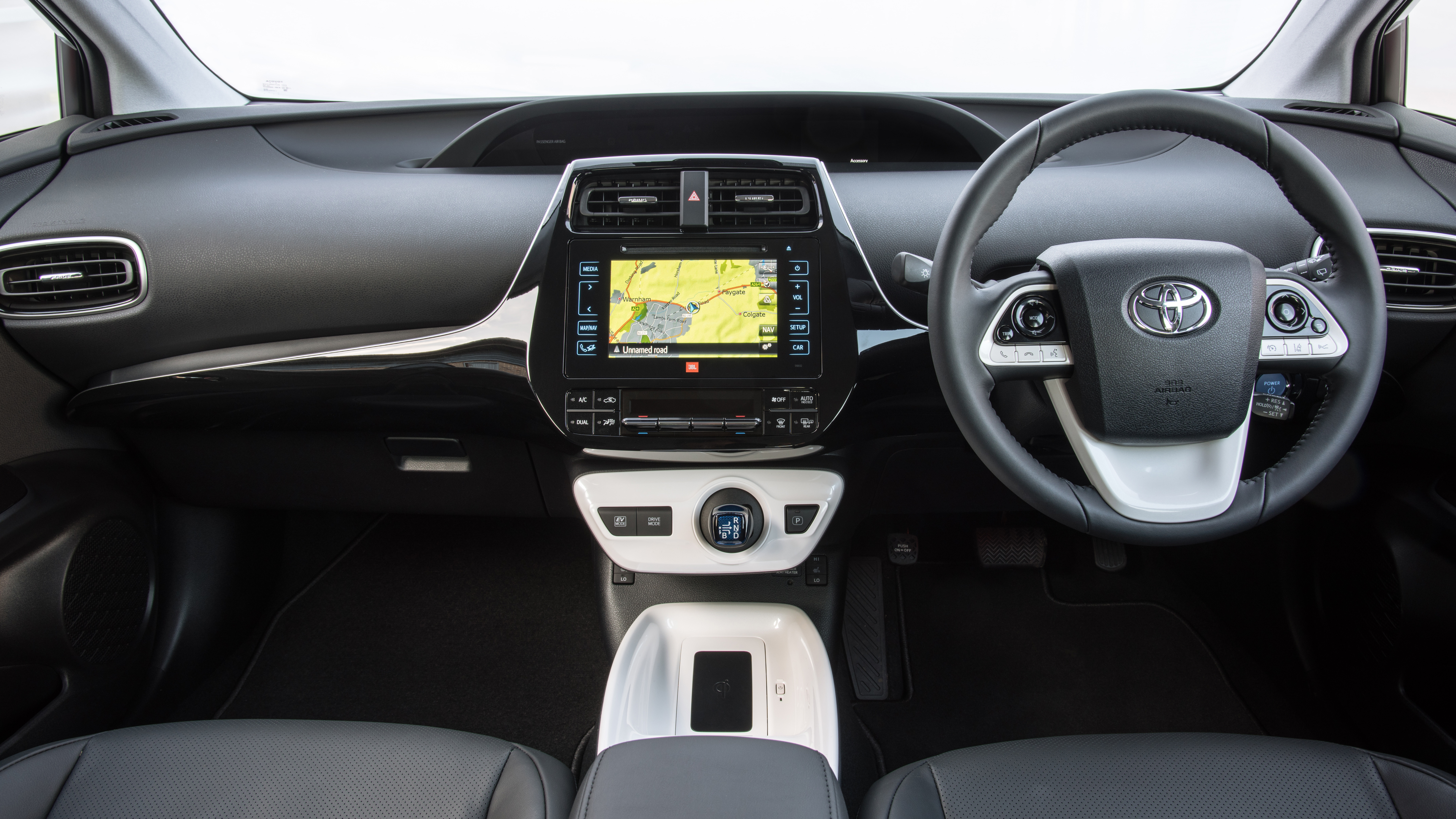 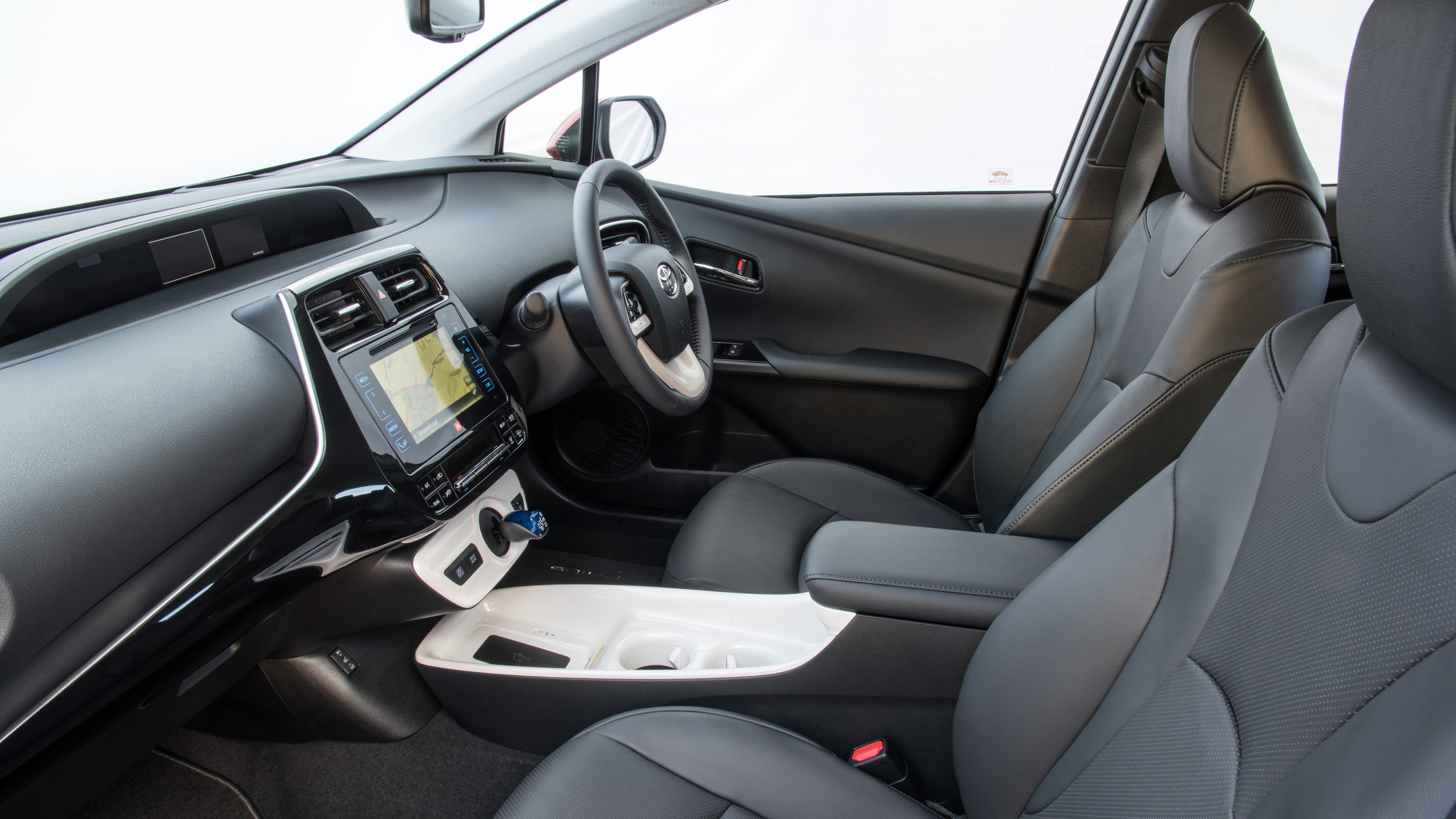 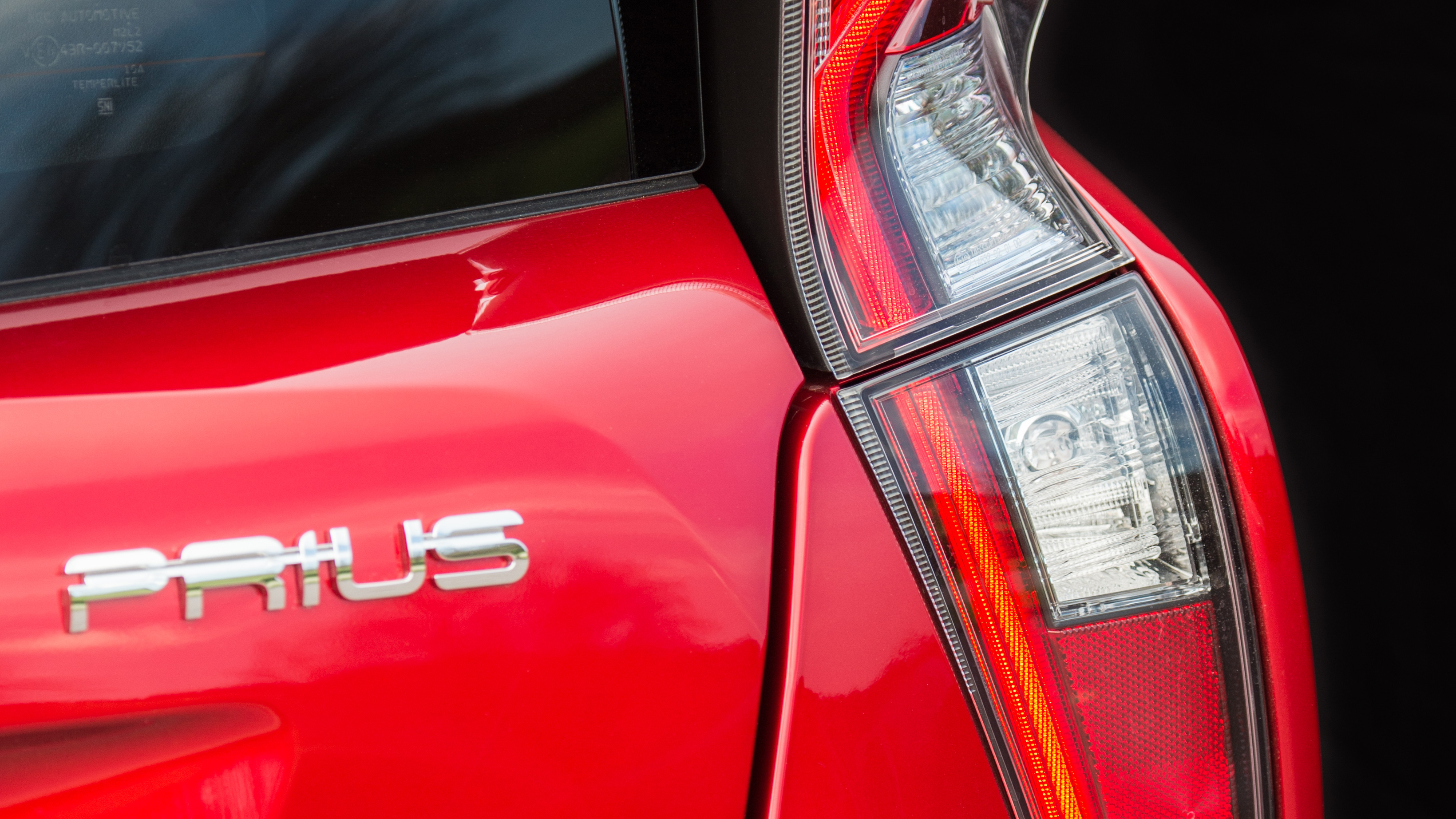 It performs well enough, but a twisty road is the last place the Prius likes to be. The super-fast steering can make the car quite nervous and darty at a fast cruise, but it’s an ace card to play when you’re dodging public transport in cities.

At speed, the car feels quite heavy, remote, and if we’re being frank, pretty ungainly – fitting double-wishbone rear suspension has not unlocked Ford-spec handling – but you can appreciate that in a rat-race, the Prius is going to be easy to drive. It just doesn’t have the wider, extra-urban comfort zone of say, a Golf GTE.

Again, depends how you use it. I’m not sure about Toyota’s bold claim that the revised hybrid gubbins now offer similar cruising economy to a diesel – the lack of outright torque means it’s always going to act more stressed at speed, no matter how slippery the body is – but left to its own devices about town (there are Eco and Power modes to pick from, but Normal is the default sweet spot) you can easily ramp economy up past 60mpg in a few miles. Though be prepared to adopt the high-anticipation, eyes-on-stalks driving style that gets the best from the powertrain.

The hybrid integration is better than ever – the petrol engine cuts in with notably less grumble than the RAV4 Hybrid.

One thing to note – the London Congestion Charge-dodging, tax-beating 70g/km output only arrives if you spec the 15inch wheels. Go for 17s and that climbs to 76g/km, so 15s are a no-cost option on all models.

Would it be a pain to live with, assuming I’m just bumbling about town?

Probably not – the aero-styled roofline obviously limits headroom a bit, but you can fit adults in the back with heads attached, and legroom is generous. The boot has grown 56-litres because the smaller battery back now lives entirely under the back seats, and front visibility is better because the front pillars and bonnet line have been shifted forward. Still can’t see enough out of the back, of course, but if you want 70g/km, you’ll need an inconvenient rear wing...

A good car then, if not an especially desirable one?

Yes, that’s pretty much it. It’s the best Prius ever, the best execution of the everyday hybrid concept – assuming you’ve got nowhere to plug a car in.

Whether or not it does anything to tempt someone who shunned the old car to buy a regular diesel hatch instead I’m not so sure – the neutered drivetrain, though better, will still put as many people off as the looks. It absolutely comes down to whether you do enough traffic-choked city driving to take advantage of the serious engineering that’s gone into this new, pointy Prius.

Then again, only 28 per cent of sales will go to private buyers, so most Prius drivers you see in the UK won’t have had much of a choice in the matter – those numbers just make too much sense to be ignored by company car folk.

Lots of safety kit. Lane-follow-o-matic, and blind-spot watching, self-parking whathaveyou can all be specced, though radar cruise control is standard. The £23,295 base model looks like decent value with auto LED lights, auto city braking, lane departure warning and digi-radio thrown in, until you spot it gets tinnier cabin plastics than the rest of the range.