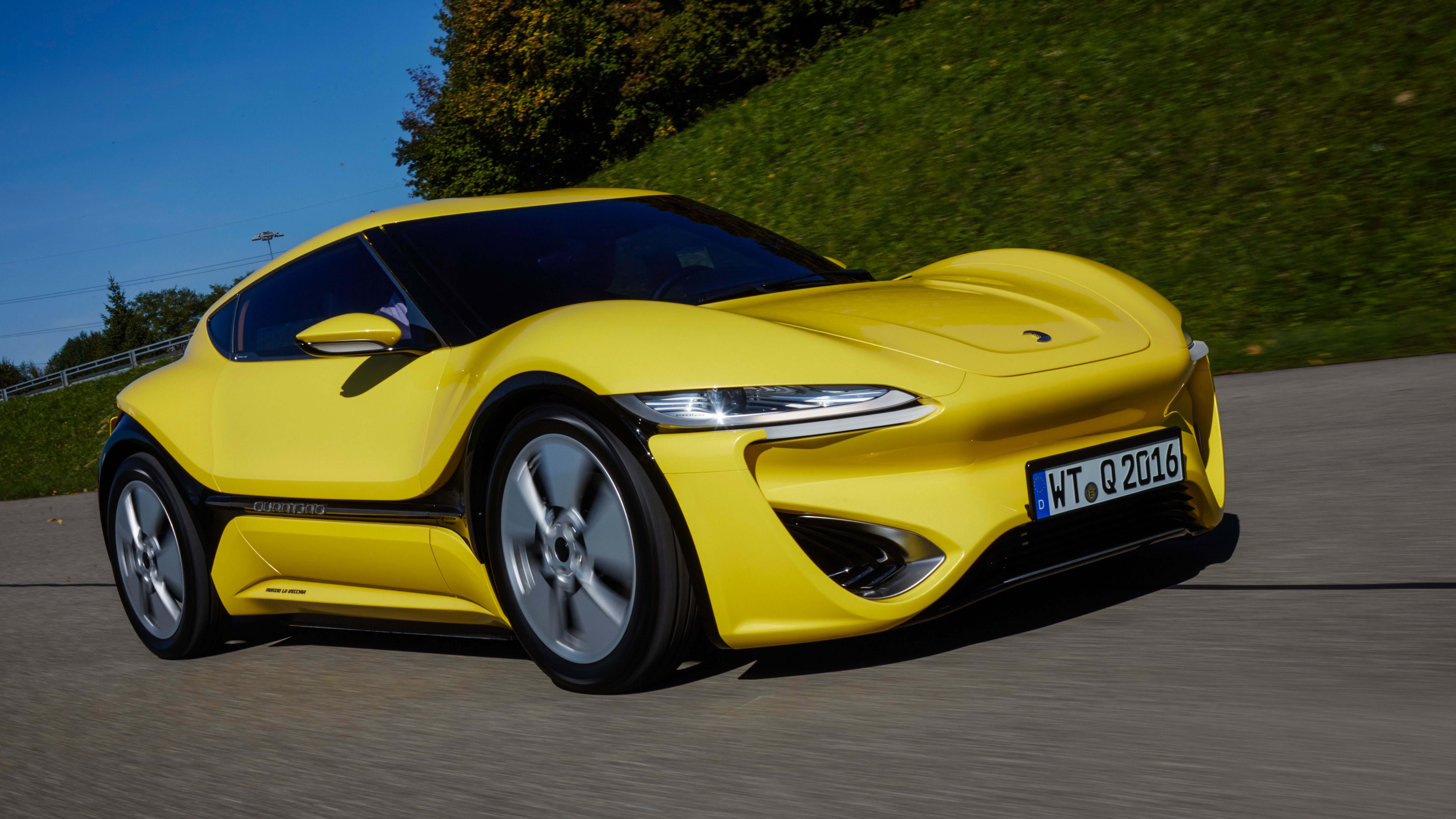 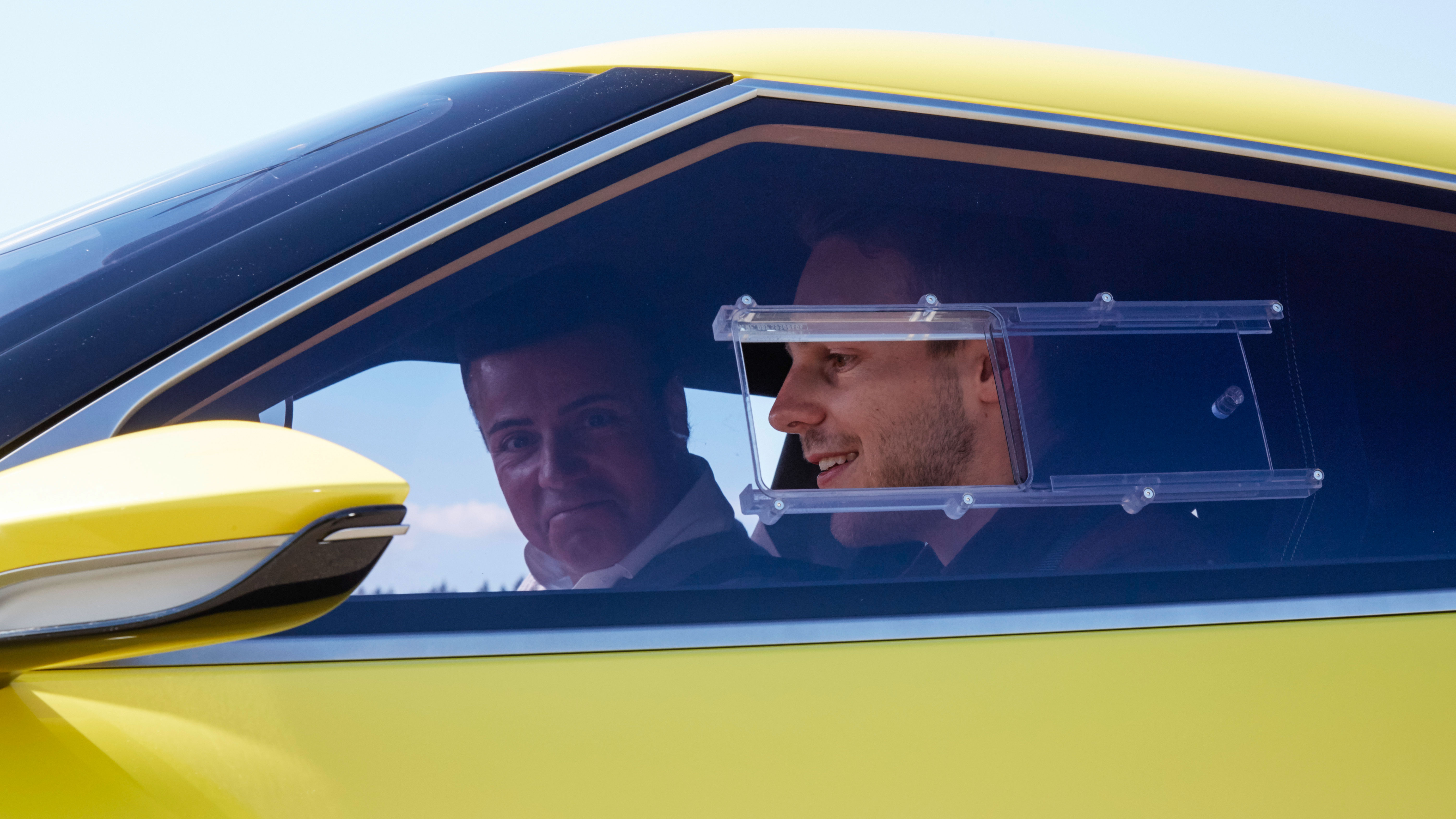 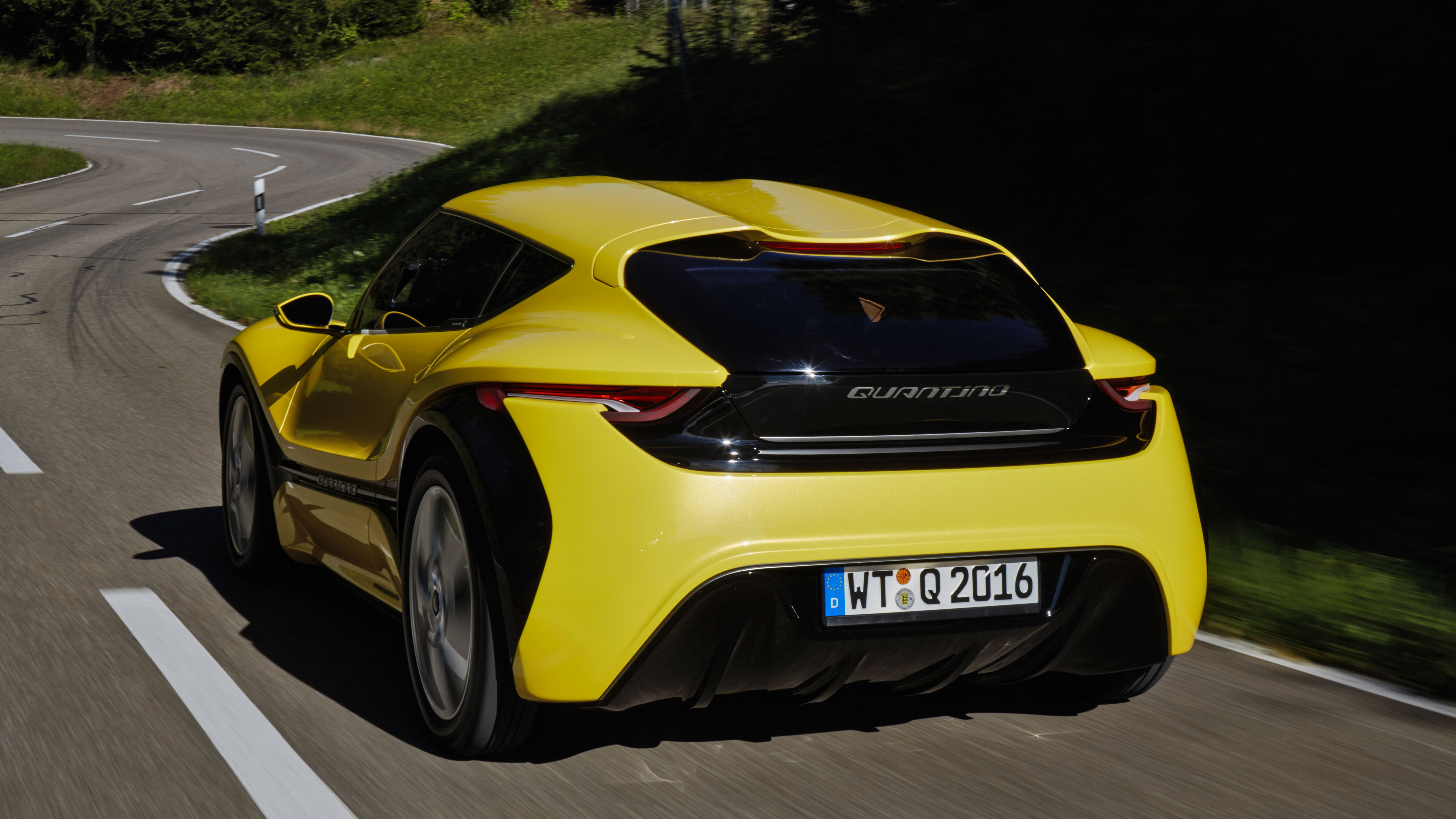 Say hello to Quantino. It’s the tiny, city car-sized sister to the Quant FE SportLimousine, the giant gullwing ultra-limo we’ve seen at recent Geneva motor shows. And the interesting bit isn’t the name, or the bizarre looks. It’s the zero carbon-footprint, zero-emission propulsion system, the brainchild of a company called nanoFlowcell, backed by a mysterious group of shareholders and business owners…

So is this just an electric car?

In propulsion terms, yes. The Quantino’s motor develops a modest 136bhp, making for a 125mph top speed and (supposedly) 0-62mph in five seconds. But if you like, this is an electric car that you never have to charge.

Here goes. The rear-drive Quentin...sorry, Quantino uses a flow cell to generate power on-board. Instead of plugging it into the wall for a couple of hours, you fill its twin 159-litre (!) on-board tanks with ‘two ionic liquids’.

Named ‘bi-Ion’, the fluid is a water solution containing both organic and inorganic salts. NASA gave up on this tech in the 1970s because the energy density was so poor, but nanoFlowcell’s enigmatic and enthusiastic chief technical officer Nunzio la Vecchia’s 16 years of work on the chemistry has apparently yielded the necessary breakthrough to beat a lithium-ion battery’s storage capacity, so far as kWh per kilo are concerned.

Mr la Vecchia won’t tell us, because the patent is pending.

Trust me, this is complicated enough already. One batch of ‘bi-Ion’ fluid holds a positive charge, the other a negative charge. The car pumps these liquids through a membrane, where the interaction of the charged electrons generates an electrical charge. The liquid is vapourised and released, harmlessly, we’re told, as ‘water dust’. This allows the tank to empty so you can refill it. It also massively decreases the car’s weight as you drive – adaptive suspension stops the 320kg fuel knackering the handling.

Meanwhile, the charge is stored in a supercapacitor, which is like a giant industrial-strength battery, more resistant to frequent charge-use-charge cycles than a regular battery, and can provide the bursts of power necessary for driving a motorised vehicle. It’s the size of a shoebox.

There’s more. And it gets even weirder. What makes the Quentin particularly interesting is it’s the world’s first low-voltage electric car. Every other EV uses high voltage, so low voltage means thick, heavy, pricey cables. But the Quantino’s are no thicker than a human finger.

Low voltage is usually used for low-speed stuff like golf karts and mobility scooters, but because the nanoFlowcell system produces high current at low-rated voltage, la Vecchia says he can get away with much smaller wires without the resultant losses and heat build-up.

Confused, I rang Top Gear’s Big-Brain-In-Chief Chief Paul Horrell, who checked his equations and replied with the extremely valid point that a combination of high current and thin wires with no resultant heat build-up defies the laws of physics. Presented with this, uh, overwhelming evidence, la Vecchia smiled and said his patents will reveal a breakthrough in due course.

Where do you start? Because the fuel is essentially saltwater, it's abundant and can be produced almost anywhere on Earth (again, the exact process is a closely-guarded secret, but la Vecchia says it could be made widespread and totally carbon-free.)

It's also safe – not volatile like petrol – so it's easy to store and transport around. Makes crash safety a damn sight easier to work around too, because there’s almost zero chance of explodey mayhem. The bi-Ion doesn't have a shelf-life either, unlike petrol. And that's before you get to putting it into the car, which you do via a twin-nozzle pump. Just like filling your car with petrol or diesel, it's a five-minute pit-stop with no cable adaptor or charging bay anxiety.

Obviously there's a complete lack of infrastructure right now, but nanoFlowcell rightly argues that the same was said of electric car charging not too long ago, and whereas charging needs monster investment, lots of parking space and puts strain on the national grid, its system could be retrofitted to existing fuel stations. Which is nice.

Apparently so. Last year, the superbly coiffured la Vecchia – no arguments, this man is in possession of the greatest hair in the motor industry – apparently competed a a 14-hour, 1100km endurance run in the Quantino. And it still had fuel left in the tanks. It was his backache after 14 hours at the wheel at up to 90mph that called time.

I don't believe it TG; you've saved the world.

Not yet. Let's go for a drive first.

The Quantino is an odd but charming looking machine in the carbon. If Koenigsegg went to Zagato and asked them to construct a Ford Fiesta rival (we can dream), it’d probably look something like this. Usually it runs an intricate set of bespoke alloys and wider tyre, but today we’re on skinnier BMW i3 rims so there’s less grip to overcome.

Press the turned metal button on the windowline and open the long, lightweight door. There are two fixed-back bucket seats inside. The Quantino was designed as a 2+2, but the prototype’s nanoFlowcell system sits where the rear seats would be for ease of maintenance. Vision to the rear is extremely limited as a result. As is headroom in the front. I’m six-foot-one, and I’m hunched behind the steering wheel, aiming not to trip up on the pedals arranged way off towards the middle of the car.

Okay, the ergonomics aren’t great, but the finish is strong. Leather and neat stitching surround tight-fitting alloy buttons for Park, Reverse, Neutral and Drive. The instruments are fully digital and pleasingly sharp and attractive. There are no bits of dangling Velcro or exposed wires I’m asked to overlook or avoid touching. The nanoFlowcell system whines away in the background.

So what, I can have all that in an Audi A1. Does this salt-water world-saving contraption actually go?

Yes, just like a regular electric car. It accelerates smartly – nanoFlowcell claims a five second run to 62mph – and though it doesn’t feel quite that snappy, there’s all the performance you’d ever reasonably expect from a small hatch here. The regenerative effort on the brakes is subtle. Immediately, Quentin feels like it’s been thoughtfully set up.

Show it some corners, and despite weighing 1420kg, it’s remarkably agile. The car corners almost completely level and grips tightly on its snaking test course, shrugging off the few bumps there are to run over. The whine of the drive system gets progressively louder as the speed rises, but it’s still perfectly easy to hold a conversation with the giggling la Vecchia in the passenger seat, and once the system has been refined and shrunk behind a bulkhead, it’d be leagues quieter.

NanoFlowcell is adamant they are a tech company, not a carmaker. And the Quantino, and its 920bhp super-limo sister, the Quant FE, are merely demonstrators of the tech. Both have been road legalised, but will never be sold.

Instead, la Vecchia tells us that the company is in talks with a major automaker to sell its propulsion concept on in 2017.

It’s also making progress with an aircraft manufacturer to provide an alternative on-board power source to lithium-ion batteries. And the company says there’s no reason why nanoFlowcell tech couldn’t power trains, boats, satellites or even your home. With the fuel costing around 10 cents per litre to produce, they see it effectively rewriting the global economy. The ambition is palpable. But while American universities say they find nanoFlowcell’s technology plausible, European institutions have poo-pooed it.

What place has this tech in a car, anyway?

Because, la Vecchia says, he’s a car enthusiast, so it made sense to refine the concept in a cool-looking, fun-to-drive car. The Quantino is at least that. Now it’s up him and nanoFlowcell to show their working, and then for the world’s fuel and transport giants to see if it’s worth investing in.