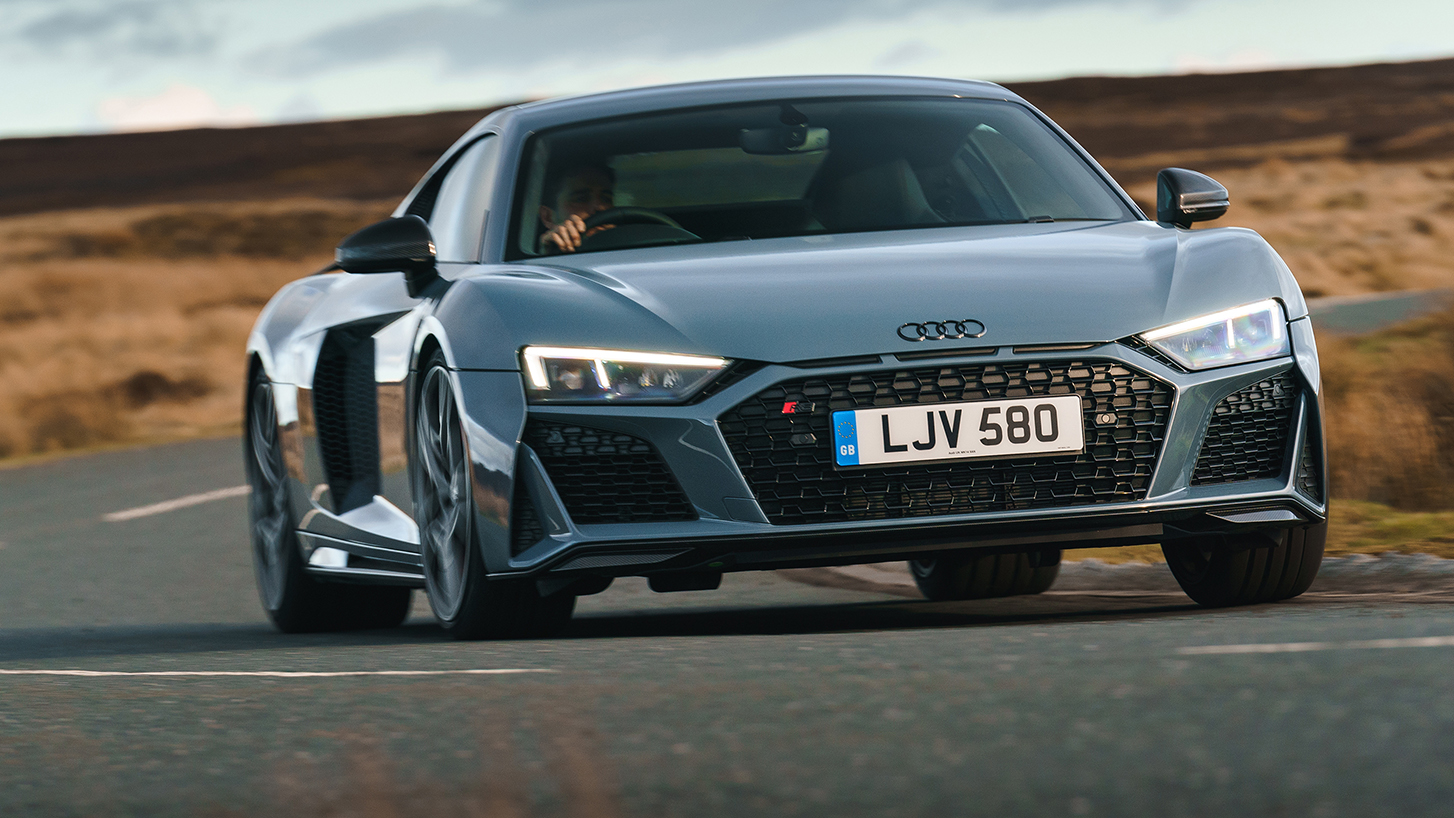 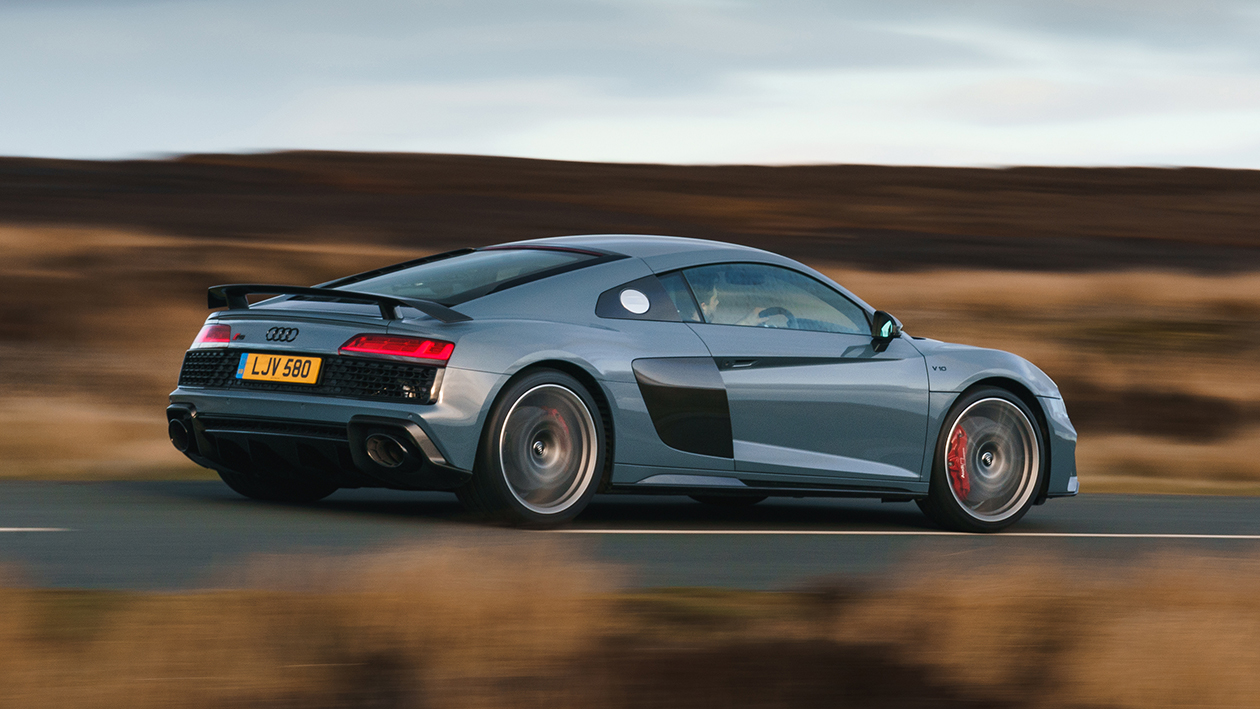 Could the new Audi R8 be the last Audi R8?

Pessimistic start, but fair point. Audi’s supercar has an uncertain future, for sure. It’s not as profitable as its Lamborghini cousin, the Huracan, because the Audi R8 wears a badge also fitted to diesel hatchbacks and some forgettable crossovers, so it can’t be as expensive as the Lambo. Which uses plenty of the same bits'n'pieces.

What’s more, Audi is pushing an electric future: the e-tron family. It’s already shown us a fabulous electric supercar concept, nudge-wink-hinting what a battery-powered Audi supercar could look like.

And the company no longer competes at Le Mans, which the original R8 was built to celebrate over a decade ago. What to do with a low, loud, V10 dinosaur?

Celebrate it, that’s what. Bloody well revel in it. This is the facelifted, tweaked Audi R8 Mk2.1. Coming soon to some subtle Tony Stark product placement near you, no doubt.

Yep, that’s the facelift surgery. Evidently Audi over-ordered on its infamous grilles last year, and needed to use up the leftovers before the accountants hit the roof. So, we’ve got a massive grille stretching right across the car’s bum, and up front, the mouth is lower, wider, and more angular.

There are gills and slats and, every time you open up the bonnet to pop your shopping in the front boot, you’ll spot that those three intakes under the badge – a retro nod to the Group B Sport Quattro – are fake. So are the intakes behind the fuel filler cap and ‘sideblade’ sections.

To distract you, the new exhaust pipes are massive. 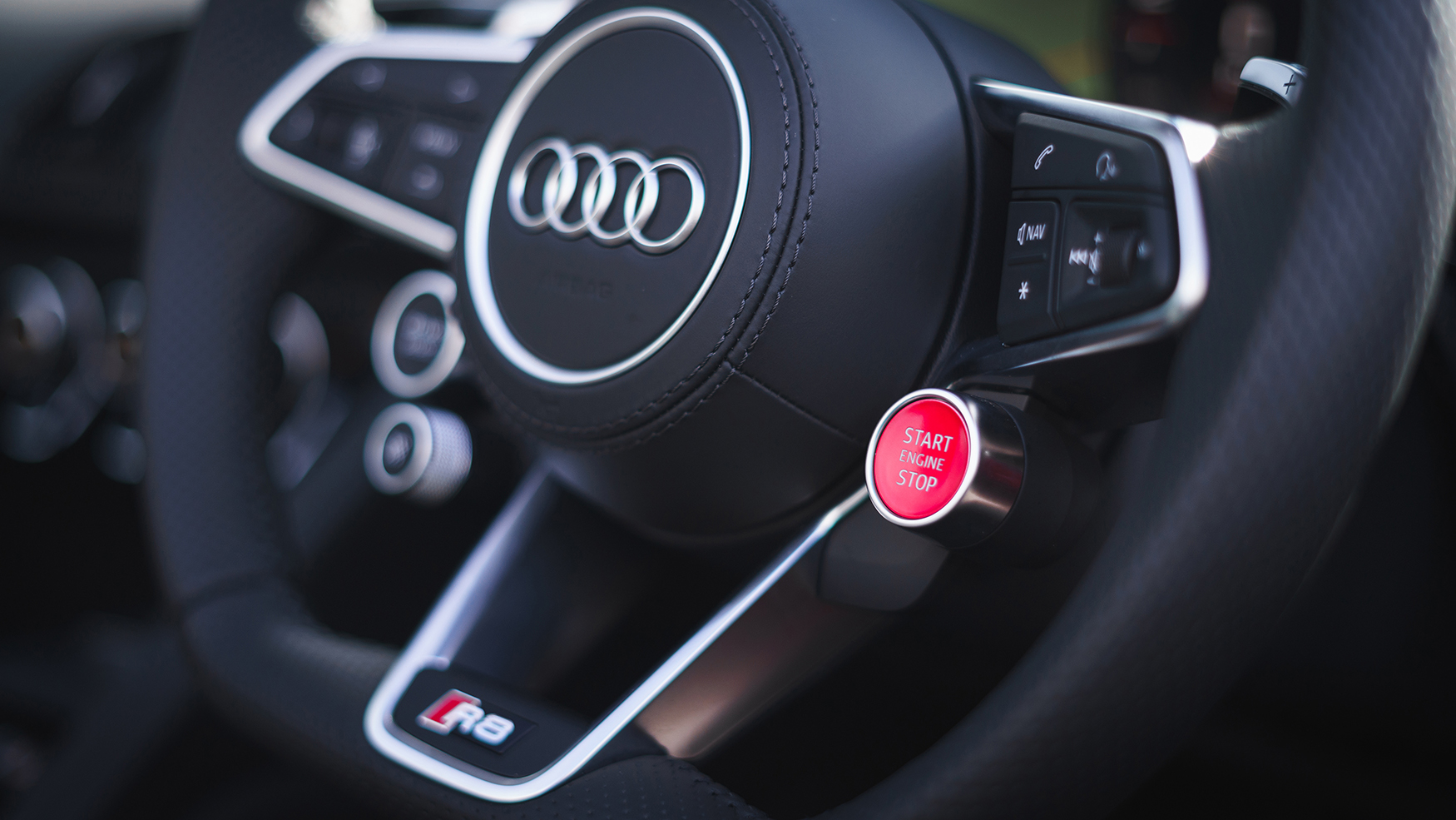 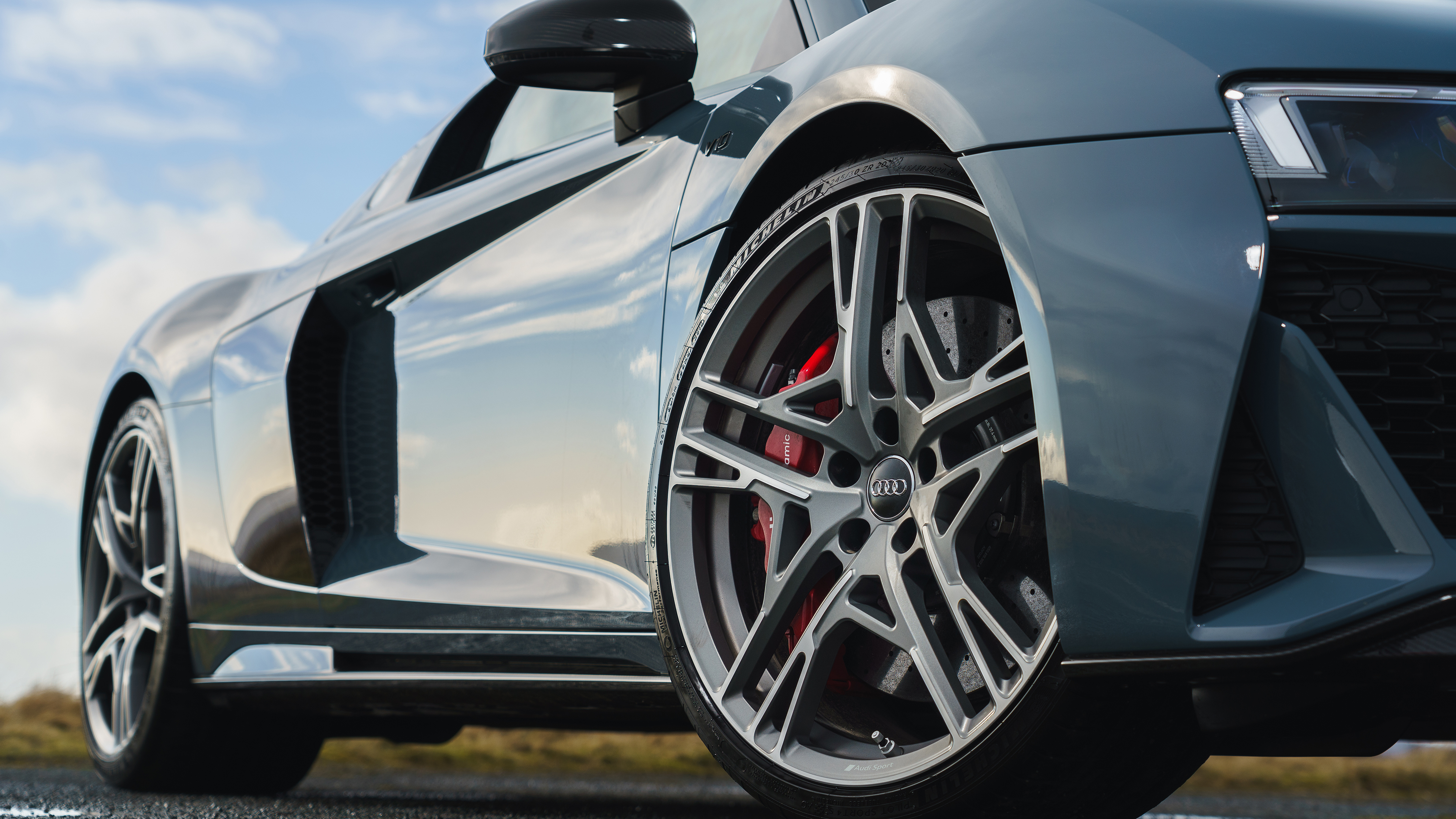 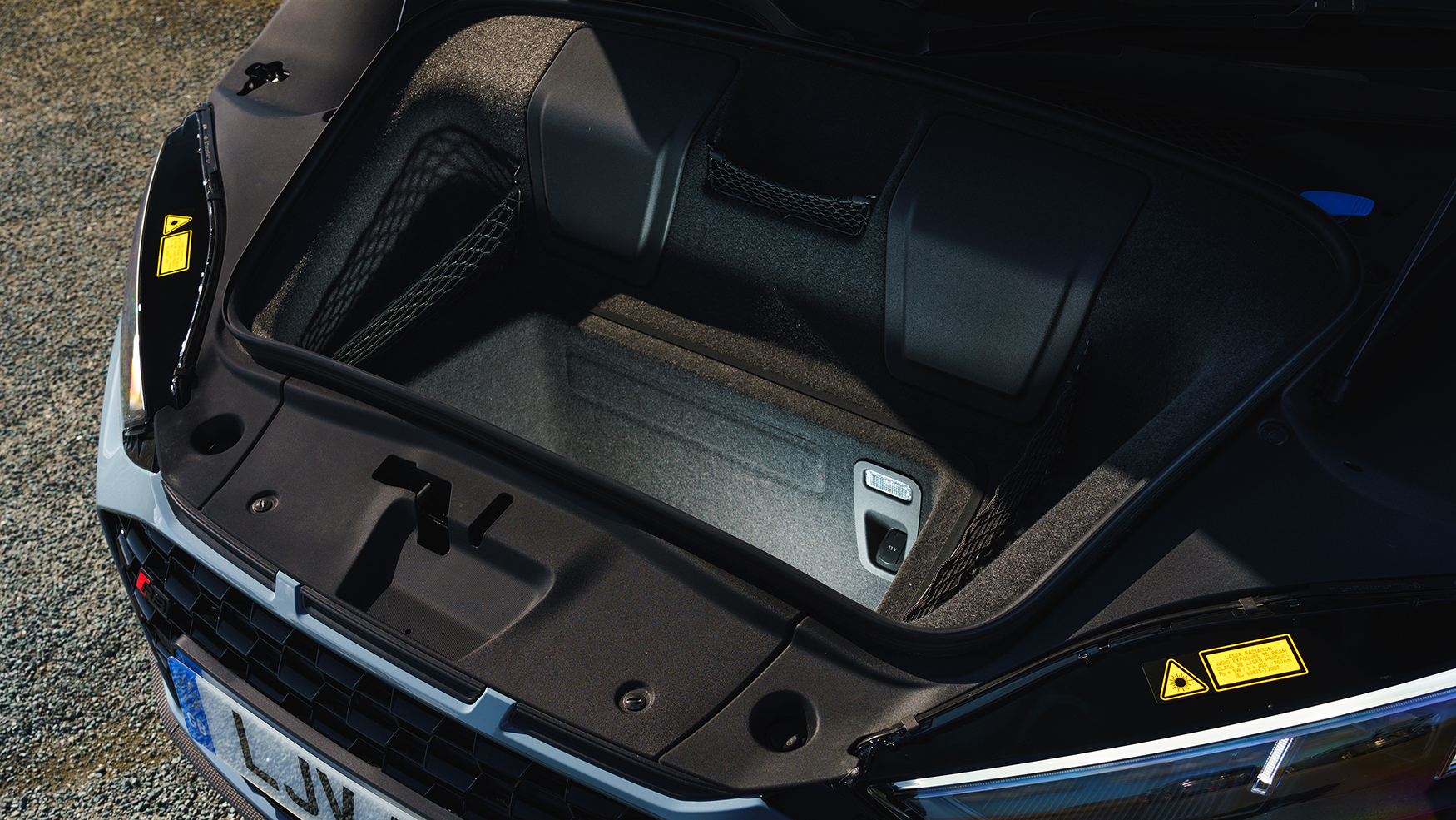 As a result, every version of the R8 has lopped 0.1sec off its 0-62mph sprint. In the Performance, that means 0-62mph in 3.1sec (and a bit quicker if you ignore Audi’s deliberately conservative claims). Top speed is 205mph. You can have a faster supercar than this, but you don’t need one.

Haven’t got time to get the stopwatch out? Not to worry. If you see an R8 with the carbon rear wing, it’s the Performance. The wing is “I’m richer than you” shorthand – the Performance sets you back a snip under £150k, or £13,000 more than the standard R8.

New name, new power, new plastic. Not much, is it?

Not especially, and it’s the same story inside – the interior hasn’t changed a bit. So, it still feels like a big TT inside, which is actually about the highest compliment you could give any car’s cabin. One screen in the driver’s eyeline, stunning flashes of carbon and real aluminium, and sumptuous build quality.

The flaws have stuck around too. The seats still don’t hug you any more than your boss’s A4’s chairs, and every time you reach for the wireless phone charging pad, you skin your knuckles on the climate control toggles.

Sorry. That’s always bothered me though, Seriously, look at the interior shot in the gallery. That cubbyhole behind the gear lever has teeth.

Anything else new and interesting?

Audi has made detailed revisions to nerdy German things like suspension components and the optional Dynamic Steering, which varies how much steering angle you get depending on how fast you’re going.

It’s supposed to make the car more agile when you’re misbehaving, and more relaxed when you aren’t. Frankly, it’s a lot more intuitive than it used to be, and if you really, really concentrate, turn down the radio and properly pay attention, the steering is a mite more detailed than before. It’s good for an R8, but not a patch on a McLaren’s lively racecar feel.

Some engines make you swear, or puff your cheeks out when they give their all. The R8’s just makes you giggle.

So what? This car’s all about the engine, right?

It is, and we’re about to get to that, promise. Kind of a double-edged sword that engine, though, because the V10 is so sparkling, so sonorous, so glitteringly, brilliantly spectacular, that it mildly exposes the rest of the R8. The steering, the magnetic damping, the carbon brakes… they’re all fine, but Audi’s never been able to raise their game to the level of one of the best engines on the planet.

Be right back, just fetching my Big Book of Superlative Adjectives.

Now the R8’s in the autumn of its life, it almost transcends being a supercar you judge rationally. Yes, you can pit it against a McLaren or a Porsche Turbo or a whatever sort of GT Mercedes-AMG has cooked up this week, and the R8 will win some, lose some. But really, this thing’s just an engine appreciation vehicle now. It’s a carnival float with a 5.2-litre naturally aspirated V10 taking centre stage.

Do you notice the extra power?

Another 10bhp in a car that weighs 1,670kg? Nope. But you do appreciate its razor-sharpness, the appetite for revs, the noise builds and crescendos, brimming the cabin as it blares from the Channel Tunnel tailpipes. It’s got real character and theatre about it. Some engines make you swear, or puff your cheeks out when they give their all. The R8’s just makes you giggle.

It’s searingly fast. Properly, terrifyingly quick in fact, but the flipside is you’re only in the engine’s glorious upper range for fleeting seconds, before things get very antisocial and irresponsibly illegal. You really might be better off in the standard R8 V10, luxuriating in that baleful howl for a few more precious tenths.

Ahh yes, the noise. At least Audi’s not fiddled with that.

Not so fast. Thanks to new EU noise limits, the R8 no longer comes with a sports exhaust option. The exhaust button’s gone AWOL from the steering wheel, and the system now plays it quiet until a valve opens once you’ve got your foot down.

I’ve got no issue with that. The car panders less to show-offs who want to pose about town giving supercars a bad name, but still sounds like Simba catching Nala in bed with Pumbaa when you’re over the hills and far away.

We’re going to miss this engine when it’s gone, aren’t we?

Just a smidge. It’s ironic that this madman of a V10 lives in a supercar that’s freakishly easy to drive and endlessly forgiving. Whatever Audi chooses to do with the R8 next, this car will be remembered as one of the company’s all-time greats.