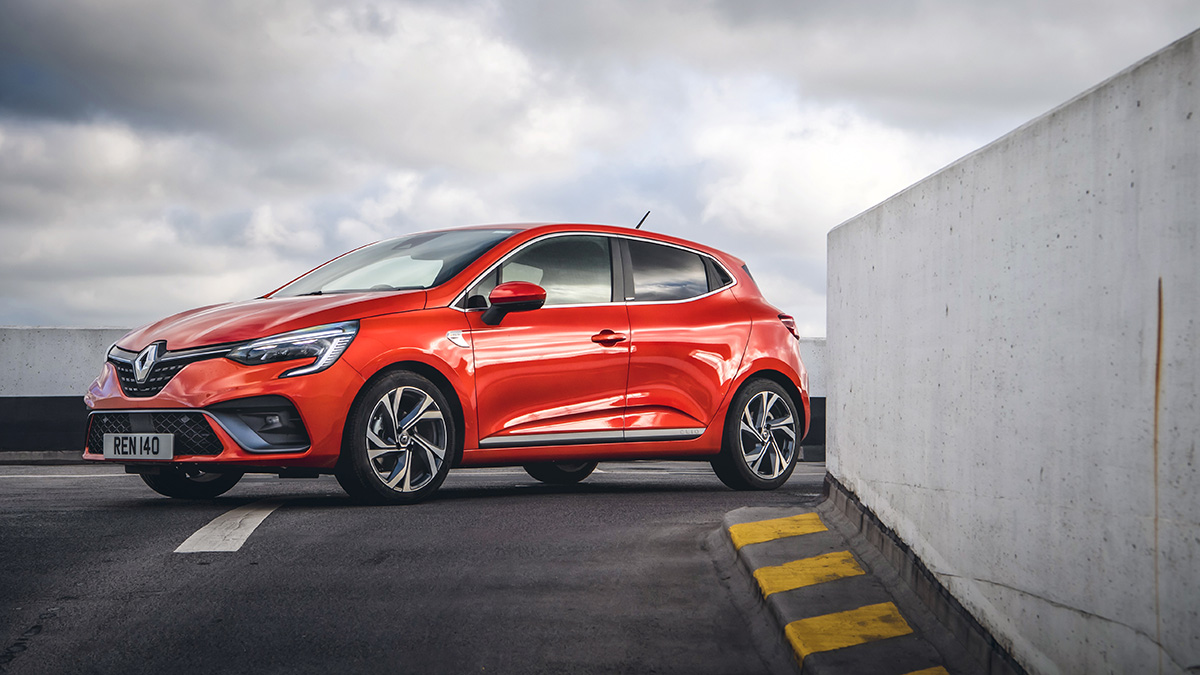 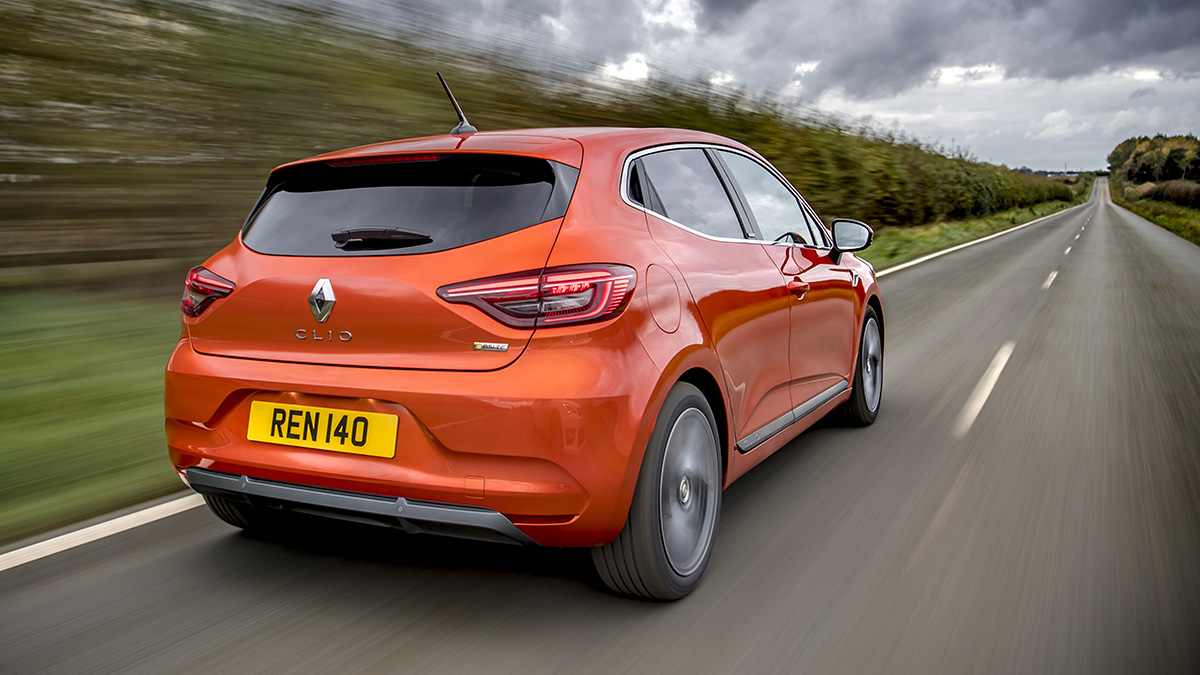 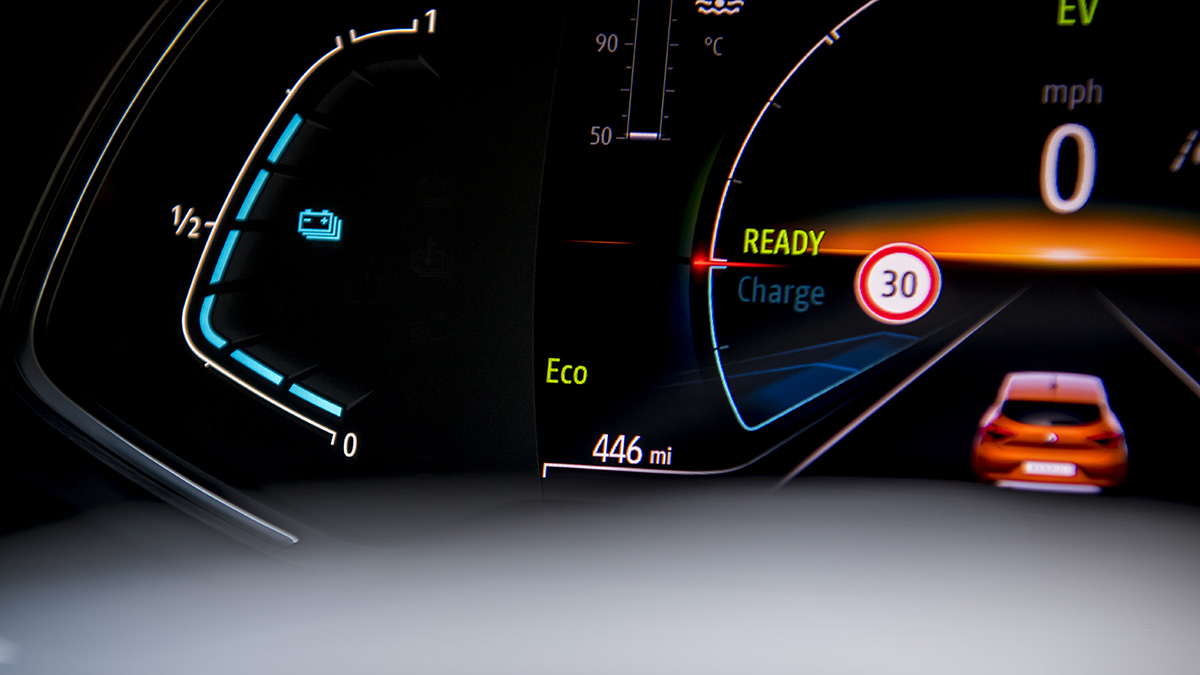 So, this is the Clio that’ll save the planet.

Not unless you’re giving the Avengers a lift to their next mission – this isn’t a hair-shirted eco-warrior, but more of an attempt to reduce emissions while diesel sales continue to slide. It’s a different car to live with behind the wheel, but to look at it you wouldn’t notice any difference. So no points for that.

The Clio’s modular CMF-B platform was designed for electrification from the beginning, and Renault is proud of the fact that despite the extra battery gubbins out back, boot space is largely unaffected. You get 300 litres back there, with a slight impingement from cooling vents on either side by the rear wheels. Still a spare wheel under the floor, too. Plus a kerbweight of 1,323kg shows that Renault has largely kept weight under control as well.

Otherwise, it’s le business as usual – this is the most mature take on the Clio yet, with a few idiosyncratic features that will confuse you and your passengers the first few times you use them, like the hidden rear door handles and boot release that’s hidden by the rear numberplate light.

How does the Clio’s hybrid system work?

There’s a whole lot of tech happening underneath the bonnet – the ‘self-charging’ hybrid Clio uses two electric motors to back up the 1.6-litre petrol engine. The first is a high-voltage starter generator, producing 20bhp. That one replaces the alternator, does the brake regen and gets the car going. It also powers the gearbox, but more on that in a moment.

The beefier 48bhp e-motor does the heavier lifting, ably assisted by a 1.2kWh 230V battery that sits under the boot floor. It won’t run for more than a mile or two in EV mode without the engine needing to come back on, but Renault reckons that 80 per cent of urban journeys can be completed in EV mode thanks to energy recuperation from the brakes and siphoning off a bit of energy from the engine.

The interesting bit is the clutchless four-speed dog box, a feature that adds a whiff of credibility to the same E-Tech badging that’s carried on the team’s F1 cars. It also harks back to the 1898 Renault Type A built by company founder Louis Renault, which also featured the set-up. The auto box allows the powertrain to operate in distinct modes, the smaller electric motor powering the gearbox to match speeds during changes. It also allowed the project to go ahead, Renault said that none of its more traditional gearboxes would have fitted with all the electronic gubbins in there too.

Is it as complicated to drive as it is to explain?

Of course, on the road none of this matters particularly, and with this first drive on UK roads, it’s immediately obvious that Renault’s engineers have done a decent job of ensuring that you don’t know what’s going on underneath the metal. The important thing is that the car goes and stops and does plenty of that without the engine turned on. There were a few rough clunks and jolts during changes during our time with the car, but those blips aside the whole effort is more pleasant than the CVT number in the Toyota Yaris.

You don’t get the roar of a CVT with the Renault’s hybrid system, but the driving experience will take a little getting used to if you’re moving from a purely IC-engined car. There’s an occasional lag as the car decides which bit it wants to provide the power to the wheels, and while the set-up isn’t as loud as the Toyota system can be, you still get the dissonant experience of the engine revving out of sync with what your foot is doing on the accelerator as it charges the battery up. You’ll learn to ignore it quickly enough, mind.

The ride is a pleasant surprise – the Clio rides flat, with minimal roll, the presence of upsets in the road mainly communicated through your ears and a slightly force-feedback jolt in the steering wheel. It’s a comfortable ride, though, smoothing out the see-saw bumps of urban driving and gliding along the motorway when you’re out of town. It makes for a car that feels grown-up, but there’s no real sense of it being fun to drive. This is the car as device, moving you in only the most literal sense.

Will it save me money?

This is more the question, isn’t it? The entry-level hybrid is in Iconic spec, £1,500 above the highest-spec diesel you can still buy in the Clio line-up, while the S Edition and R.S. Line models add £500 on top of the next petrol cars down. Obviously with fancy tech like this you’re going to pay a premium – official fuel consumption of 64.2mpg is higher than comparable models in the Clio range (we managed around 52mpg over a few hundred miles, with a third of that travelled in electric mode), so that’s maybe a few hundred pounds a year of fuel saved, plus £50 lower VED annually. We drove the £22,495 Launch Edition version of the car – the most expensive Clio you can buy, but it does come with useful things like keyless entry, the 9.3-inch touchscreen infotainment and a suite of electronic safety widgets.

Should I buy one then?

This hybrid Clio is the sort of car you’ll buy with your sensible hat on – sure, it sips petrol well enough, but it doesn’t really do enough to justify getting it over one of the cheaper petrol-engined versions of the car. Especially when its rival hybrid hatches are the excellent new Toyota Yaris and the eminently practical Honda Jazz. Do you really want something French that’s kinder to the environment? Look at the electric Renault Zoe, for starters.