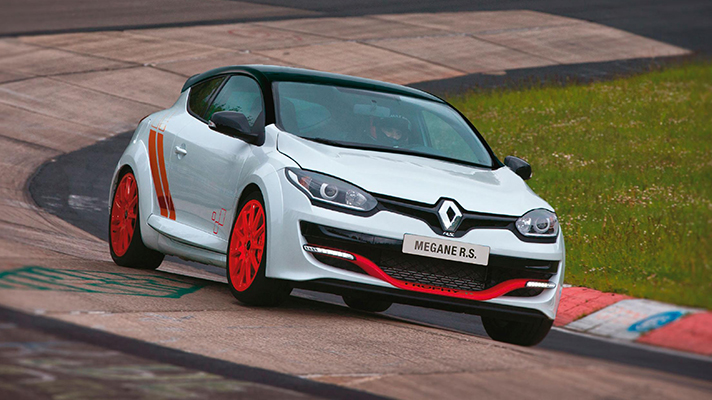 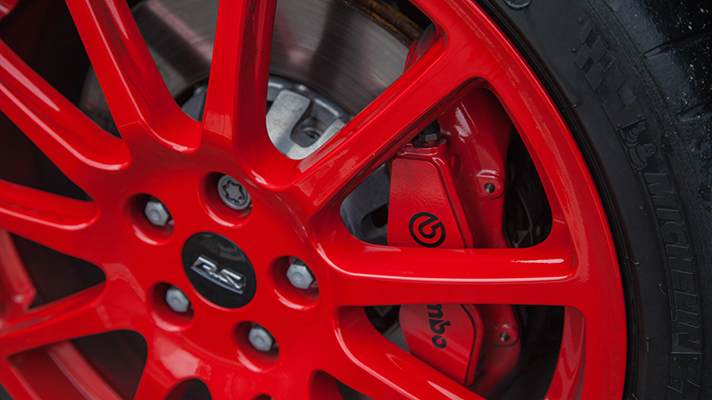 This is Renault's hardest-cored hot hatchback, the Renaultsport Megane 275 Trophy-R. The R signifies ‘Radicale' - French for extreme - and there are precisely no prizes for identifying this as the spiritual successor to 2008's wondrous Megane R26.R.

Like its forebear, the Trophy-R has snared itself the front-wheel-drive lap record around the Nürburgring. Though at 7m54s, the new Megane's time is a full 23 seconds faster than the R26.R's. It got there via a similarly strict diet, with 100kg stripped from the already honed 275 Trophy.

So what's been stripped out?

Removing the rear seats saved 20kg, swapping the front chairs for body-hugging composite Recaro buckets another 22kg. An Akrapovic titanium exhaust system slices off a further 4kg, while a reduction in sound deadening culls 21kg. There's no air con or any kind of stereo (minus 7.4kg) and even the rear wiper has disappeared with the auto lights and wipers (a further 1kg).

A vast reduction in rear visibility for a gain cancelled out by a modest bag of shopping appears completely fruitless for road driving, but there's no denying such fastidiousness all contributes to the car's incredibly focused aura. GT3 RS owners will feel right at home here.

You'll be hard pushed to find another tin-top car as ruthlessly committed to performance and pace this side of £100,000.

So how much is it?

Just 30 are coming to the UK. Prices start at £36,430, while the optional Nürburgring Record Pack - lighter, stronger brakes, six-point harnesses for the bucket seats and a slimmer lithium-ion battery - punts this up to £38,425. And you can easily option the Trophy-R north of £40K. Pricey, then, and a hell of a lot more than a Golf R.

But it's simply not a Golf R rival. What Renaultsport has delivered is one of the most intense, focused driving experiences at any price. One that asks the utmost commitment of its driver and delivers suitably high rewards when it gets just that. Want anything less from it and its price and impracticality make it an irrelevance. But know exactly what you're getting into, and it could be called Good Value.

How the heck does it justify that price though?

The expensive stuff lies beyond such fripperies as being able to listen to the radio. Namely its superb suspension. Ohlins adjustable dampers - optional on the regular four-seat 275 Trophy - are standard here. We didn't have time to get the tools out and start fiddling (the settings available are wide-ranging, too), yet it hardly mattered.

On the UK's urban roads the Megane crashes and thumps its way over speed bumps and potholes, admittedly, but as soon as you build up some speed everything makes sense. The Trophy-R is never less than exceedingly firm, but purposefully so. Bumps, cambers and changes of road surface are never disguised but they're telegraphed brilliantly, and the steering is surprisingly communicative given its electronic basis.

It's also flipping fast, feeling its extra 44bhp over an R26.R, and then some. It rips through its gears with indecent haste, the whole process soundtracked by a guttural roar.

You say it requires commitment...

What Renault's done is follow the recipe for the R26.R, but it's lobbed a scotch bonnet or two in during the cooking. The result is a car with fistfuls of extra savagery and excitement, but one which isn't as accessible if you're faint of heart.

Accept this, roll up your sleeves and get stuck in, though, and everything sharpens into focus. Front grip is prodigious, turn-in instant and scalpel-sharp, while the mechanical front differential is as bewitching as ever at pulling you through a corner and utilising that horsepower.

The front end is so aggressive in its reactions that it can unhook the rear considerably if you've loosened the stability control. In the dry it's feisty; in the wet it can be plain wild, with traction a real issue. Renaultsport has earmarked a wet-weather setup for those dampers, though...

Surely it's a long-distance nightmare?

Depends on the hardiness of your mindset. With all that sound deadening removed it's hardly an ambassador for refinement, but it's no more boomy inside than a basic supermini and you can always spec the audio back in to take the edge off more prosaic journeys. Not wanting to look like softies, that's exactly what we'd do.

The seats are supremely comfortable and, even if you've specified the harnesses, regular belts remain should you want to avoid rigmarole ahead of short journeys. You'll feel a cop-out if you do, though. And while you might miss having rear seats, additional load capacity is an unlikely by-product of the Trophy-R's intense makeover.

Every sensation and each bit of feedback is so genuine. Even the theatrics of the titanium exhaust; its snaps, crackles and pops come with a wonderful irregularity, proving they're real mechanical reactions, not some manufactured-in marketing tools.

In an era where paddleshifts and heaps of electronics reign supreme, this is evidence that, done properly, a manual transmission and a proper diff are still the most direct route to thrills.

Renaultsport, this is you at your best. Now can you sort the Clio out, please?