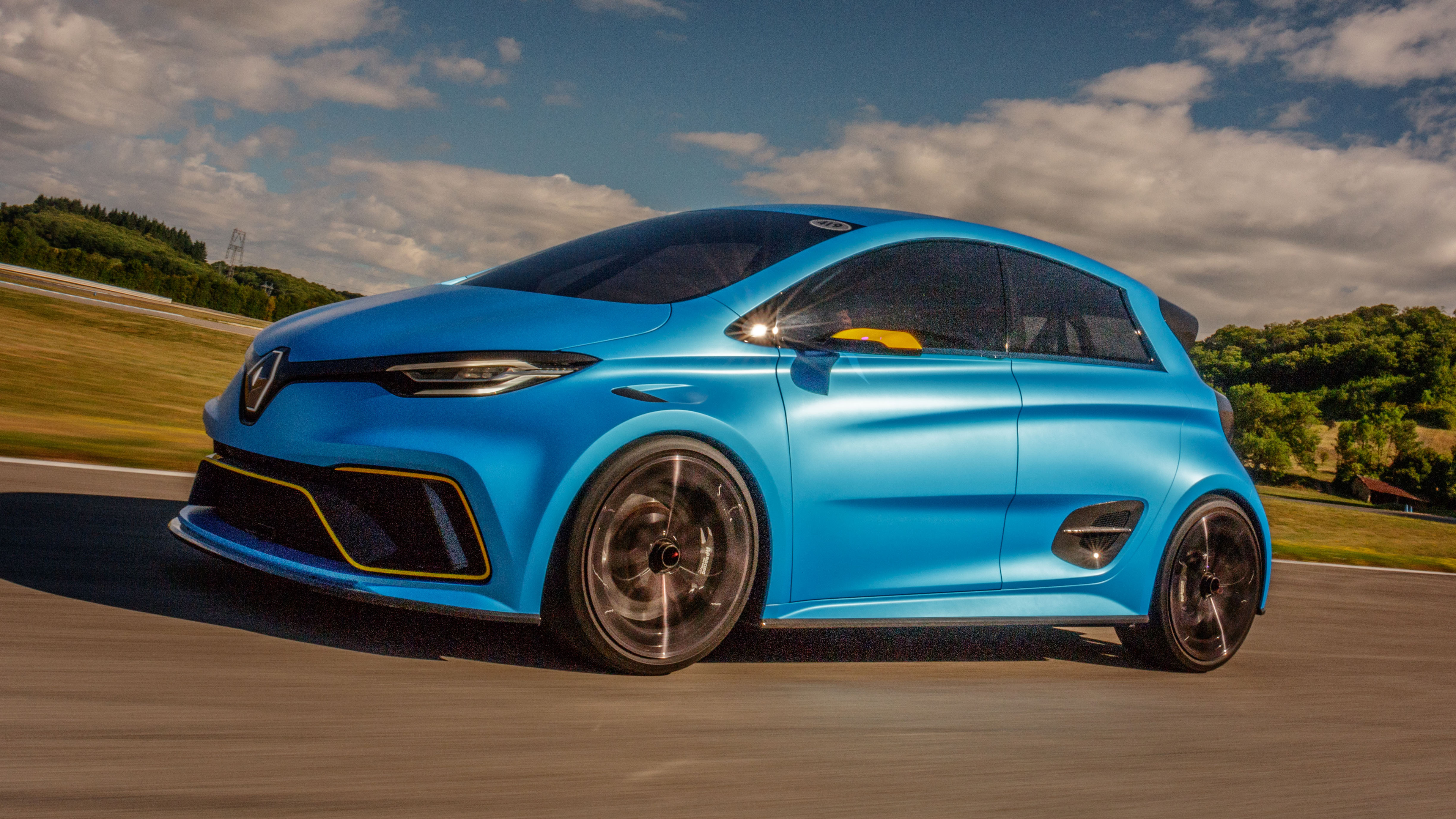 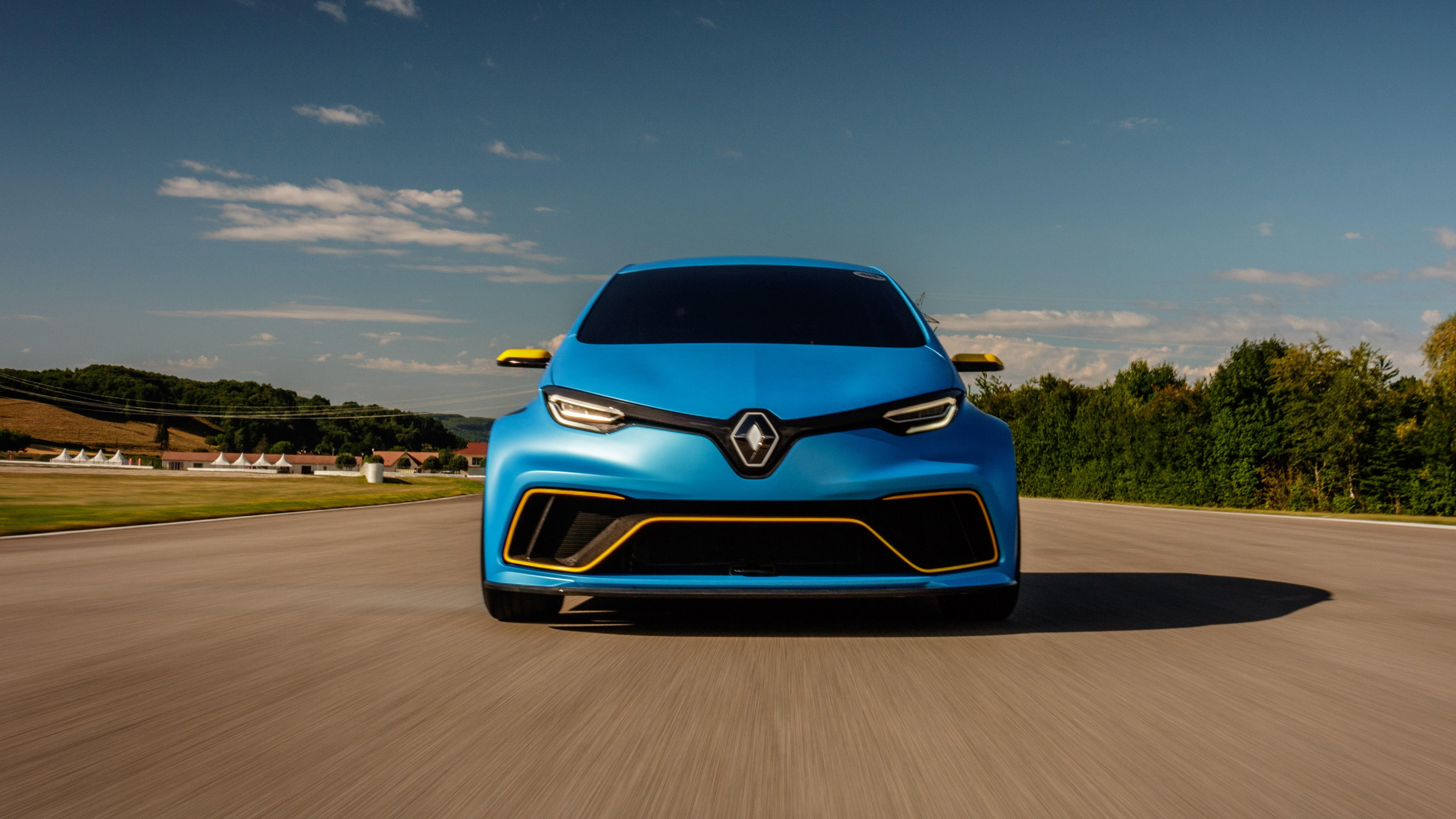 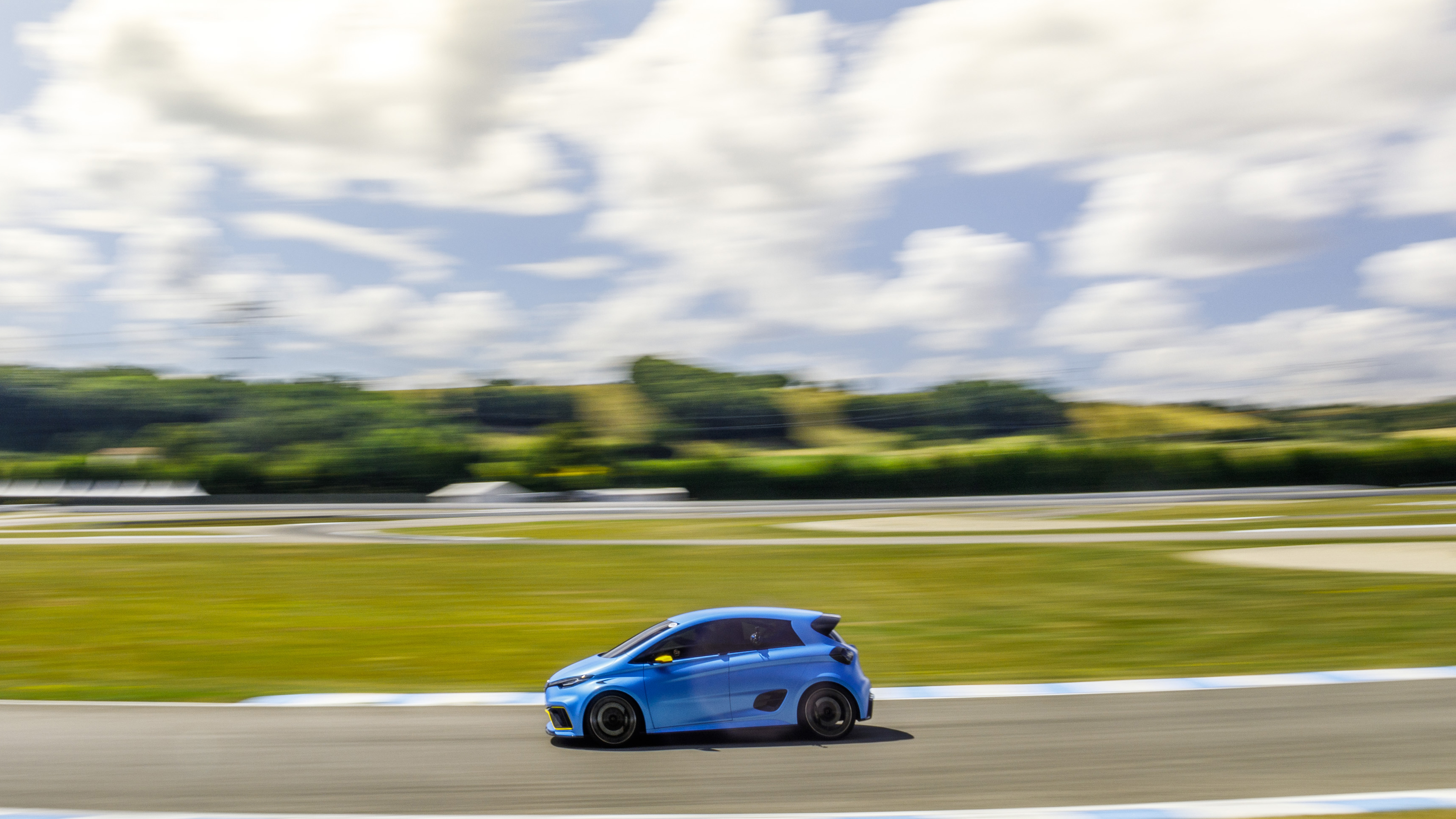 Holy merde, what is that?

It’s the Renault Zoe e-Sport: a 460bhp, two-seater, four-wheel drive, electric supermini. Coming from any other manufacturer that would seem preposterous. Renault though, has rather a rich history of dreaming up absurd franken-hatches (see Renault 5 Turbo and Clio V6 for hair-whitening proof) and actually putting them into production. This is just another day at the office.

So I can buy one?

Erm, no. Sorry to poop the party before it’s got going, but you won't be seeing this one at your local dealership, or wrapped around your local lamppost. That's because the Zoe e-Sport concept is a one-off, designed to draw a link between Renault’s efforts in Formula E and its road cars. Unusually for a show car though, it’s fully functional, which is how I come to find myself strapped into the driver’s seat, an empty track in front of me and that time a Clio V6 spat me off a track at 100mph for no apparent reason playing on loop in my head.

OK, so how much standard Zoe has it got in it?

There is definitely a passing resemblance, although here the outrageously widened track and arches, but same short wheelbase, give it an almost four-square stance on the road. Carbon bits everywhere, mirror finish wheels and uselessly skinny wing mirrors are reminders this was designed to shock and delight when it appeared at the Geneva Motor Show back in March. Here, skulking in the pitlane, it looks even meaner… and surprisingly fit for purpose.

Probably because it is. Under the carbon body (which helps to keep weight to 1,400kg, 80kg less than the standard Zoe despite a 450kg battery pack on board) are two Formula E motors – one for each axle – producing a total of 460bhp and 472lb ft of torque. Cradling them is a bespoke tubular steel chassis with double wishbone suspension front and rear, four-way adjustable Ohlins dampers, and a Kevlar-reinforced, FIA-approved roll cage. The torque split is a constant 45/55 front/rear with mechanical differentials on both axles.

It’s a completely bespoke racecar then...

Basically, yes, one capable of 0-62mph in 3.2 seconds and 130mph in under ten seconds, so a straight line launch is where we shall begin. Foot on the brake, turn the key in the big red plunger, twist a dash mounted switch to activate both motors and another to engage your single forward gear. Stamp on throttle. The thrust doesn’t quite knock the air from your lungs, but it certainly peels your eyelids back a bit. I’m crushed into my Recarco seat most forcefully in the two seconds after extending my right foot, stay there until past 100mph, and then the forces tail off – the exact opposite to the crescendo of acceleration you’re used to in something high-revving and sans turbo. 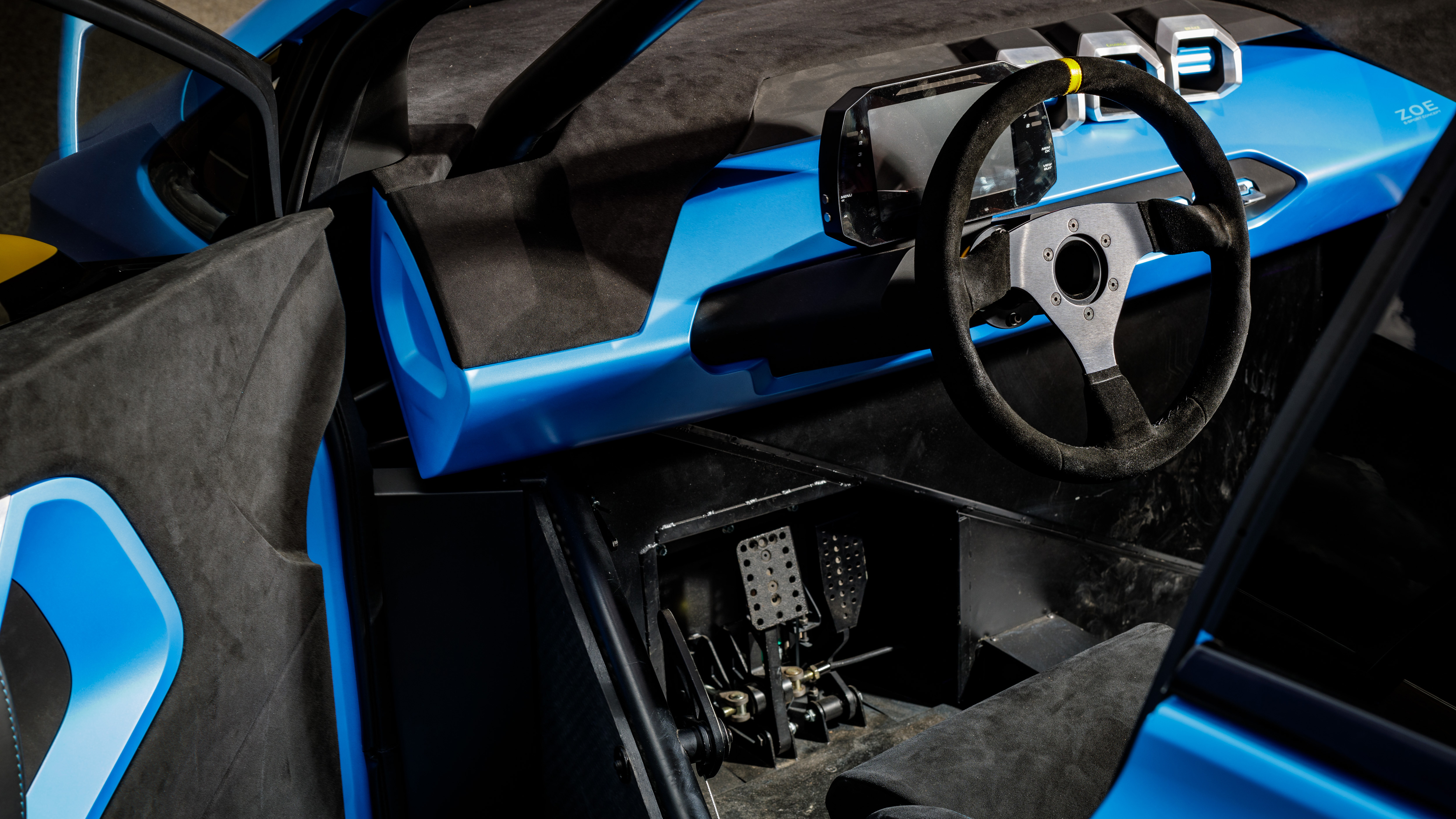 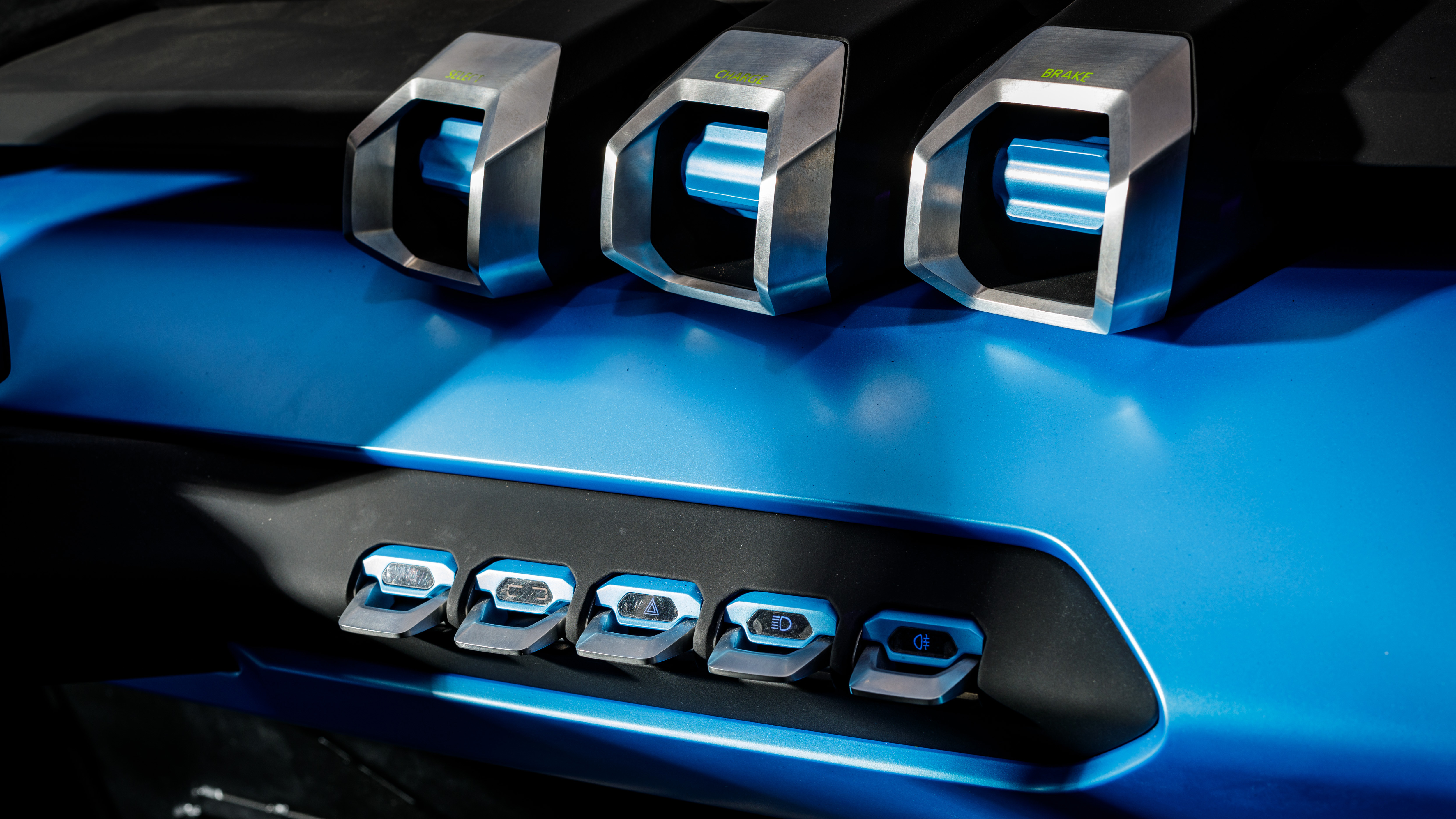 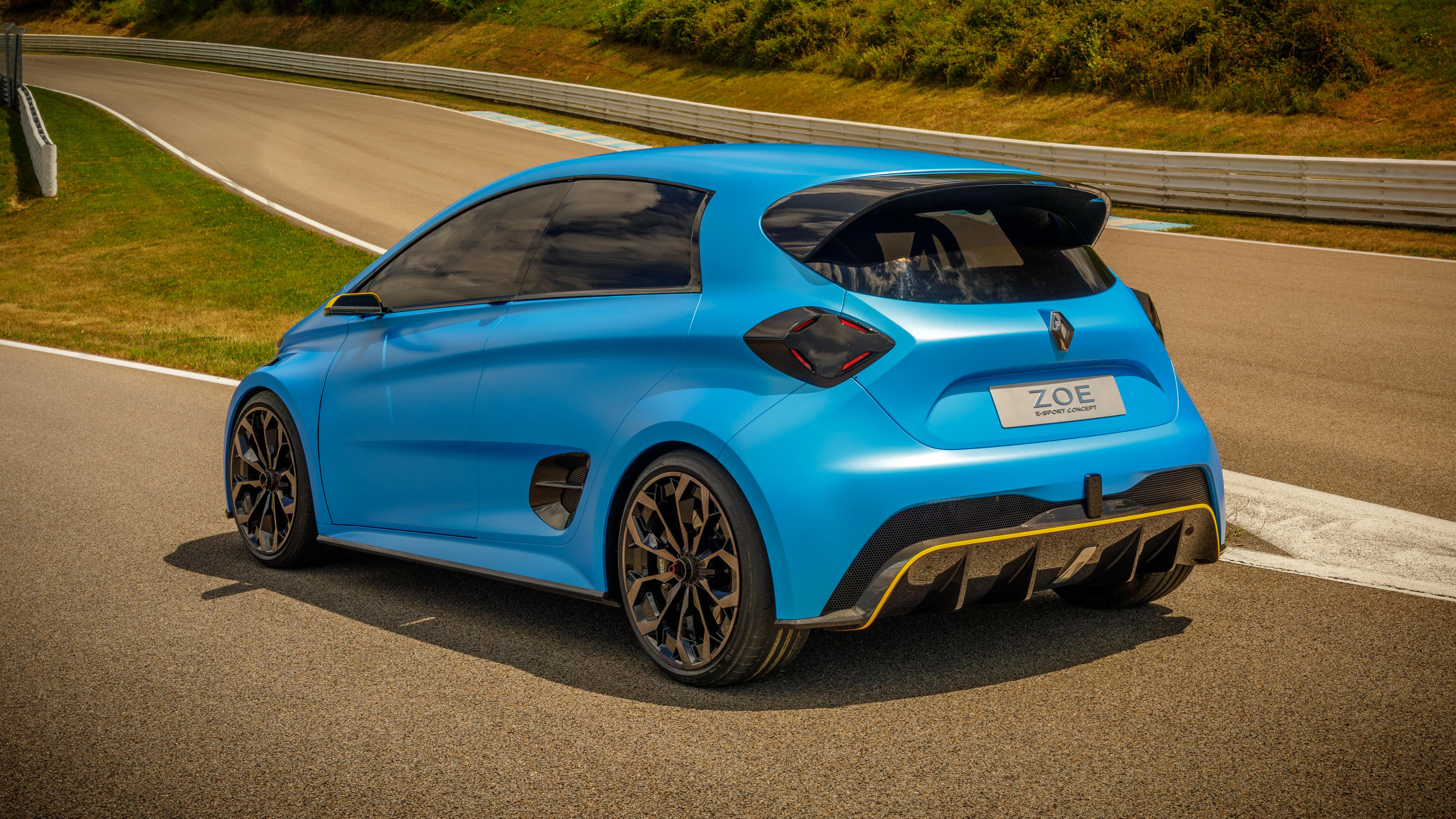 And in the corners?

That’s where the real fun happens. Tread on the unassisted brakes for the first time and you realise your thighs need to work five times harder. Turn in and the steering has that delightful race-bred immediacy: zero slack and a desire to be pointed directly at the apex. Get too gung-ho with the throttle and you simply spin the tyres and push straight on, lift off and the back end moves immediately – an alarming development when you have so little steering lock to play with. And then you relax, smooth your inputs, grasp that with so much grunt and pin sharp throttle response you can’t have a binary right foot, you need to dial in the power sensitively, and it all comes together.

Like all good Renault hot-hatches this isn’t just grip and go, there are things happening in three dimensions. While the steering tells you what’s going on at the front axle, the back is up to something entirely different and all the while you’re pulling the strings with your wrists and feet. Mind suitably focused by the bill if I end up in a barrier, it’s utterly absorbing – hard work and quite fighty, yes – but rewarding nonetheless. A worthy modern successor to my old nemesis, the Clio V6.

High praise indeed. Where do Renault go from here?

Well, battery technology needs to take another leap before something like this becomes truly feasible for mass production (we were limited to around 10 laps by dwindling charge) and the lack of noise is... a challenge, but the principle works, the low centre of gravity is a big bonus and the hit of acceleration is unlikely to wear thin. The combustion engine might be under threat, but don't freak out just yet - judging by this, what's coming next is even madder and more capable.