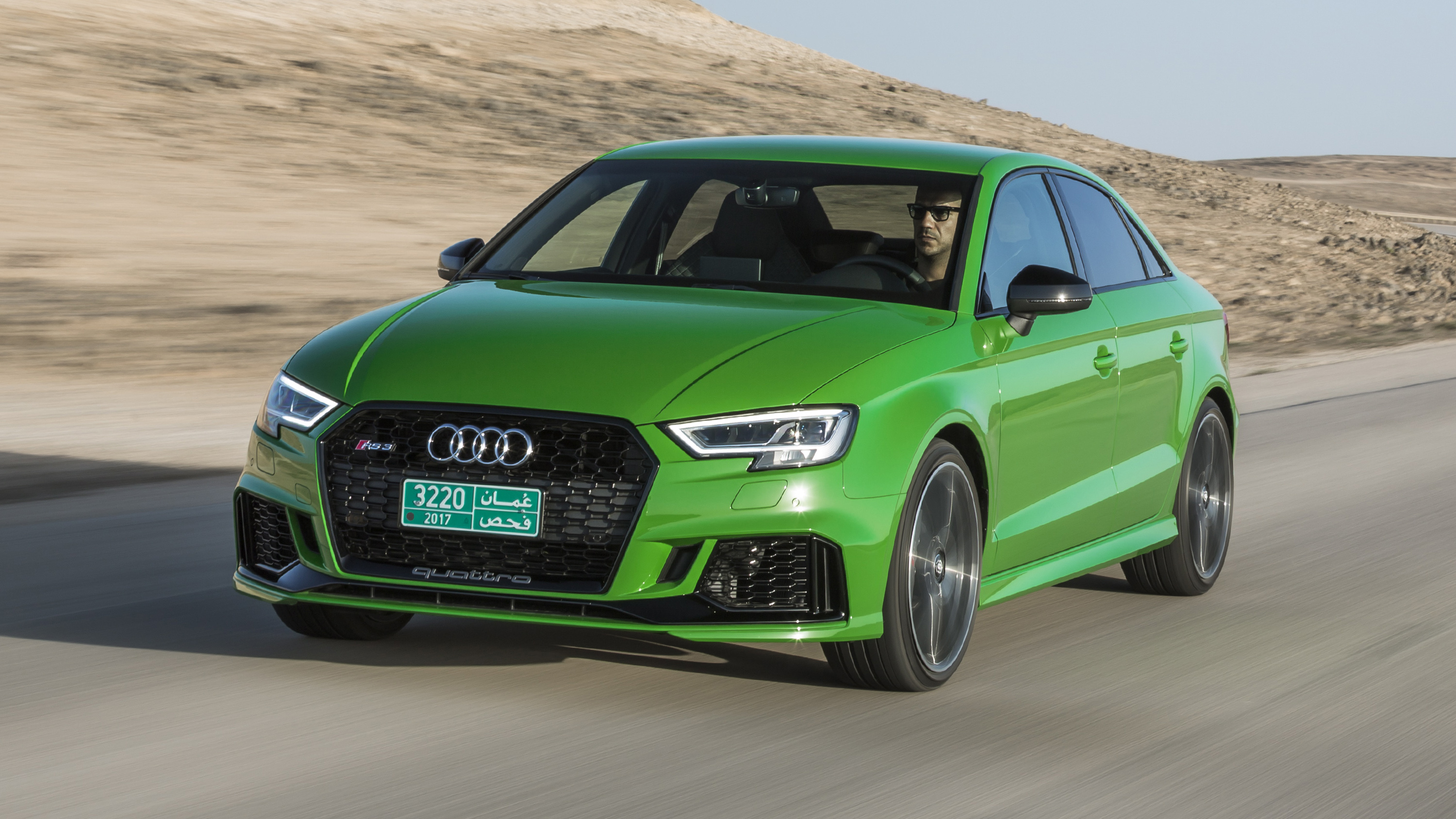 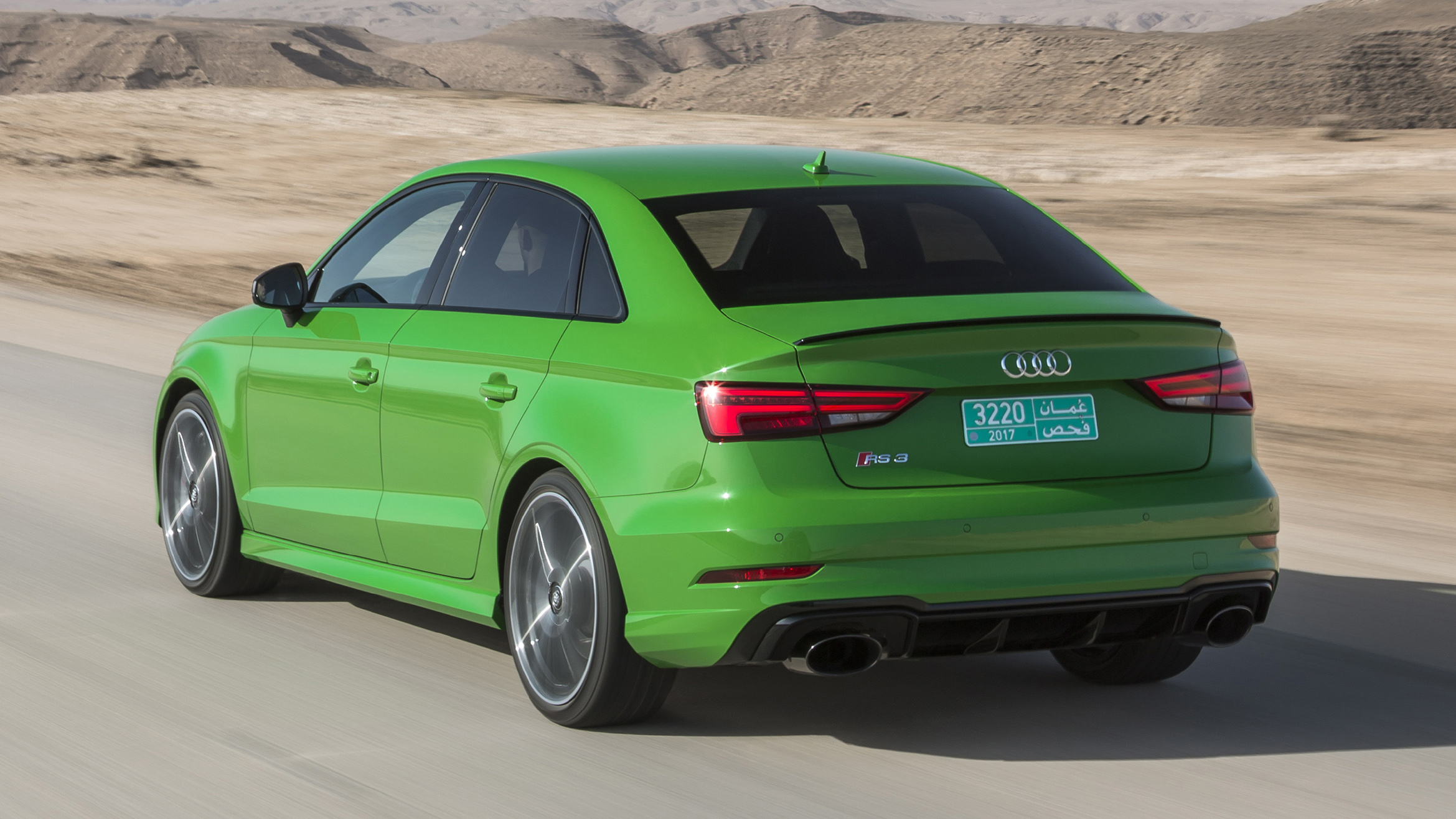 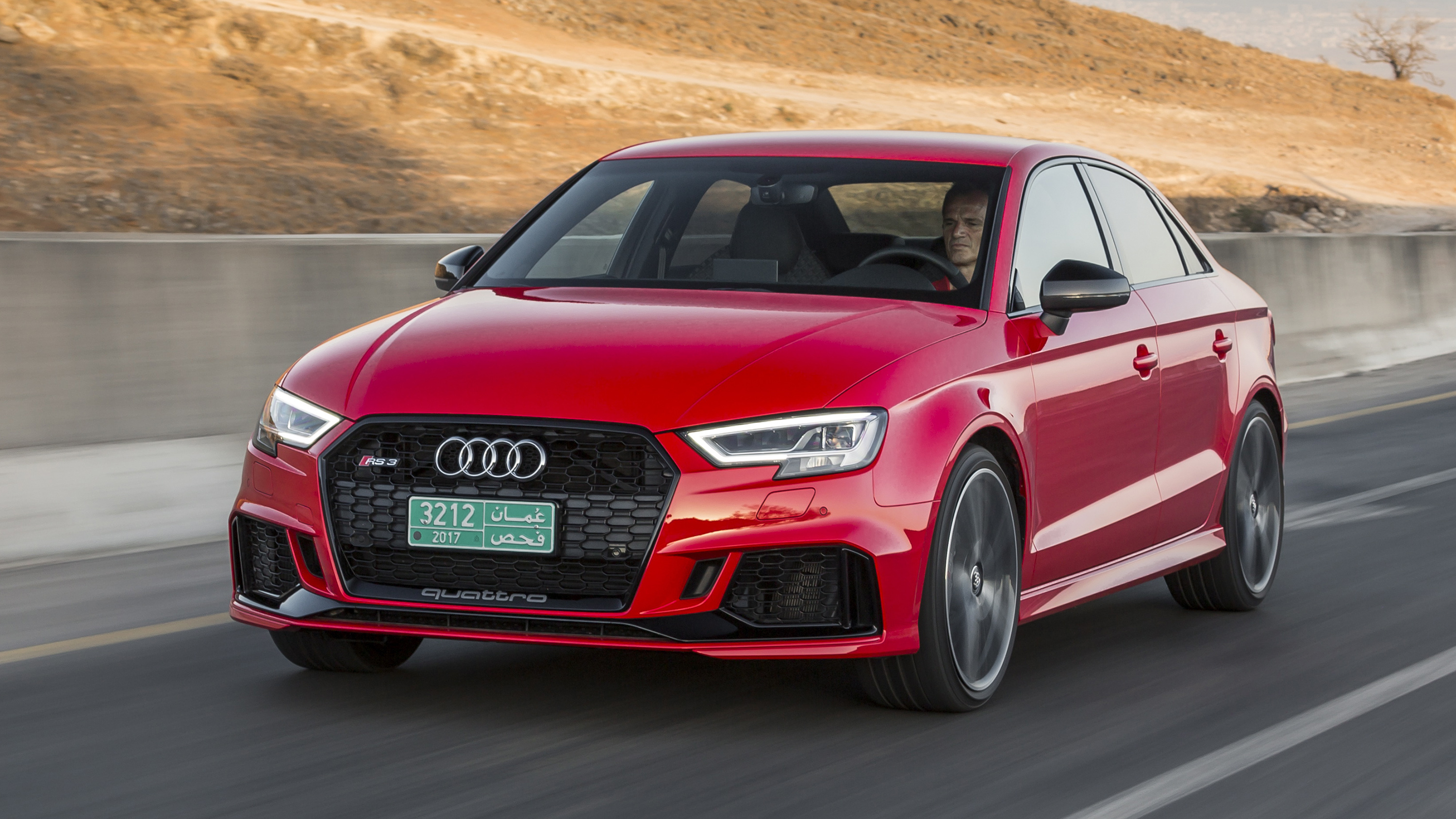 A reasonable amount. There’s a boot on the back for starters, with a four-door RS3 Saloon joining the five-door Sportback in the range. It’s also greener than before. If you spec it in the wonderful Viper Green above, that is.

More importantly, there’s been some fiddling with the oily bits beneath. The outgoing RS3 isn’t a bad car, it’s just one whose dynamics have never been as lively or exciting as its howling five-cylinder turbo engine might lead you to expect. In a world of drifting Ford Focus RSs and mad-as-a-badger Honda Civic Type Rs, it’s just not fun enough to compete.

So what have they done to improve it?

The same Quattro four-wheel-drive system is fitted, but it comes with new software. So while the RS3 could send 100 per cent of its power to the rear axle before this mid-life update, it never felt as aggressively set up as you might hope.

In its new guise, the system never has a standard power split. Audi’s engineers say the ratio between front and rear axles constantly varies, to match both grip levels beneath and driver input inside.

There’s more power, too. The 2.5-litre five-cylinder engine produces a nice round 400PS, or 395bhp, which is up 33bhp on before. Additionally, the engine is 26kg lighter (thanks to an aluminium crankcase and magnesium oil pan, if you want to geek out).

That might not sound like much, but from a single component, it’s impressive. And crucially, it’s weight that’s been taken away from an important part of the car – the front end that was rather too keen to push on in corners, rather than turn incisively into them.

Oh god, yes. The top speed is 155mph, but Audi will lift this to 174mph with the right options box ticking. And that’s still limited. For a car this size, it’s frankly bonkers.

Its 0-62mph sprint also lives in a more serious part of the market. Audi quotes 4.1 seconds – 0.2sec quicker than the old RS3 – and we suspect it’ll dip below that easily. With the seven-speed S Tronic automatic gearbox linked to a launch control system, it’s all dangerously attainable, too.

More importantly, is it fun?

Yes. The promise shown by the RS3’s slinkier sibling – the TT RS – has been delivered upon with a car that’s notably livelier than before. The caveat is that our first drive has taken place in Oman (why wouldn’t it?), a country whose mountain roads have a slick, low-grip quality akin to a greasy B-road in the UK. We suspect they exaggerate the RS3’s dynamic character, but equally they would starkly bring any weaknesses right to the fore.

In fast, sweeping corners it grips like you wouldn’t believe. And you will be taking those corners quickly: the pace from its engine is just bombastic, right from 2,500rpm to its 7,000rpm redline. Predictably, with five cylinders, it sounds excellent. But it sweeps so quickly through its rev range, I’m not sure you ever fully get time to savour the noise. 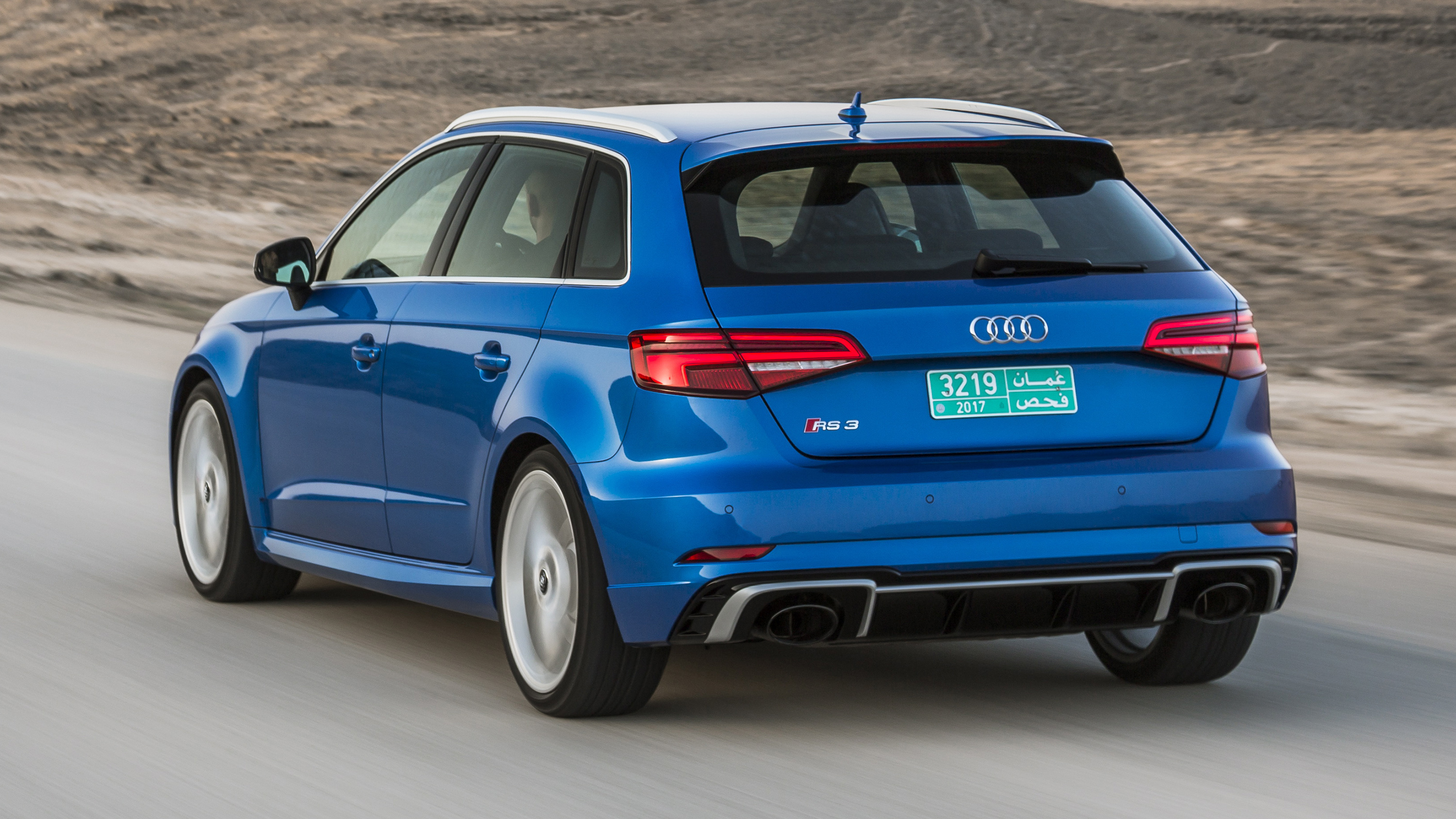 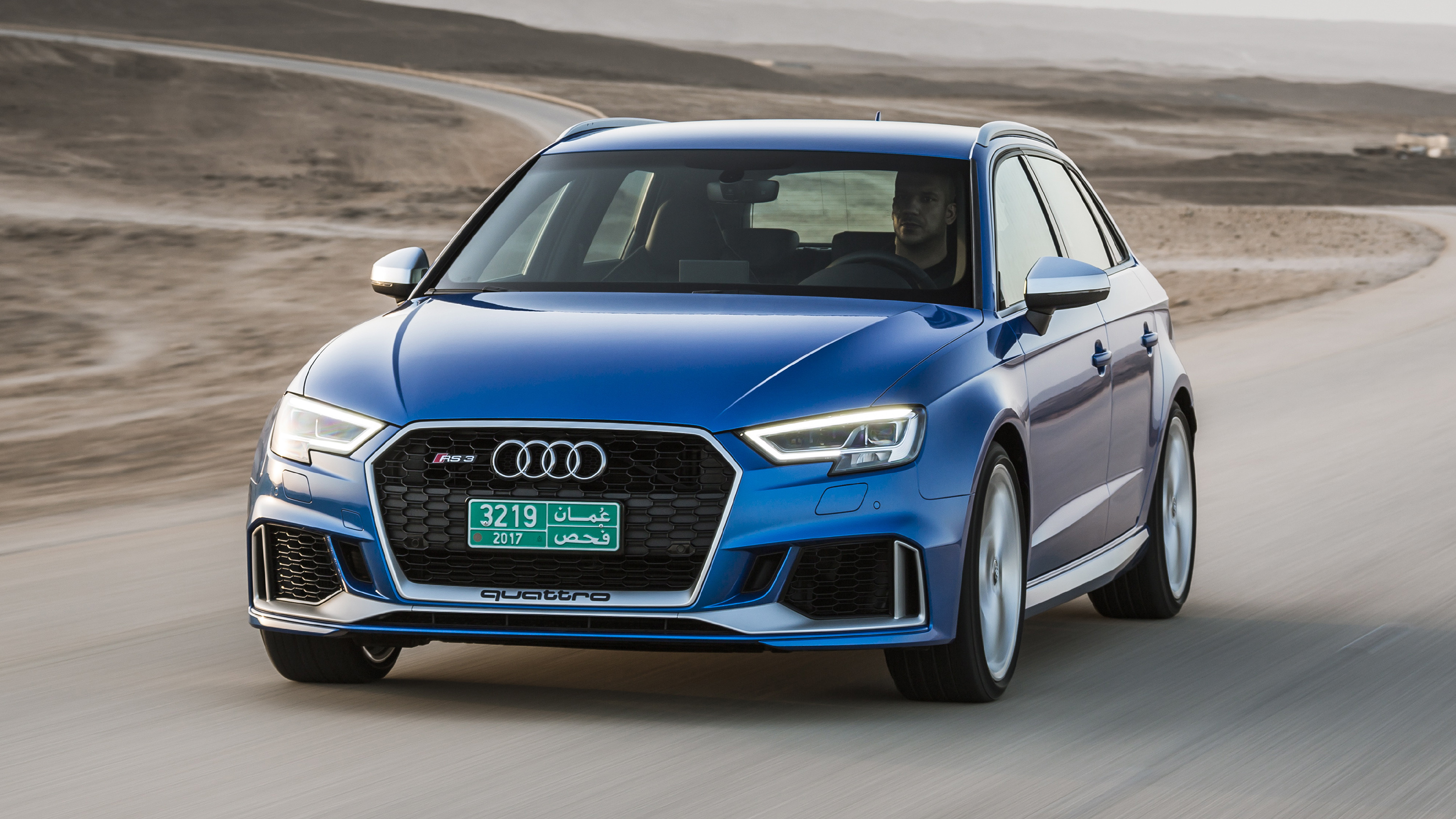 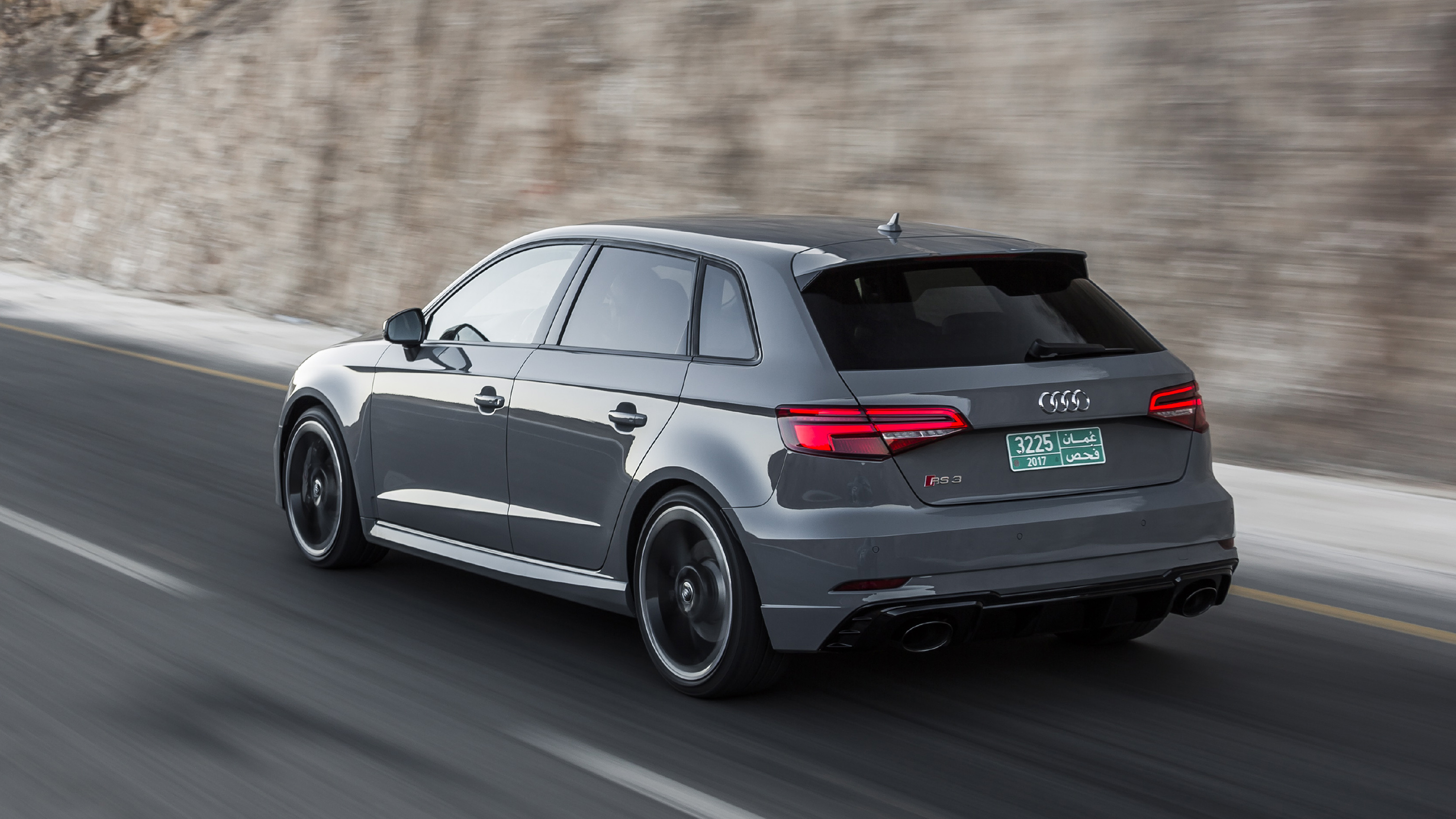 Indeed. And the RS3 makes up for it in slower, tighter corners, where it feels adjustable and up on its toes in a way it simply hasn’t before. It’s still not got the most locked down front axle, but the way power is flung to the back to counteract that is far more assertive than before. In short, it’s happy to slide around, this thing. We need to drive it in Britain for full assessment, though.

It also feels right with a paddleshift transmission as standard; I’m a firm believer a hot hatch should have a manual, but three pedals and a stick in here would just feel like an inconvenience when the rest of the spec sheet is so senior. The shifts are super quick up and down the gearbox, though there’s little aural drama on downshifts, even with the optional sports exhaust.

Any differences between the Saloon and Sportback?

Nothing truly tangible. We’d argue the former looks better, and recalls Audi RS4s of old. It weighs 5kg more and comes with less luggage space, but otherwise they’re identical, and Audi tells us suspension changes between the two have only been to account for the effects of different weight distribution.

Yes, suspension. A frequent fast Audi downfall. Again, we need to fully assess it in the UK, and on the standard steel suspension, we suspect it’ll be firm, given how it handles bumps in the road in Oman. But there’s an optional Magnetic Ride system, its characteristics chosen via the drive mode select button, and we suspect it may be a handy box to tick.

As glorious as all Audi RS models. The seats are plush and finely stitched, there’s Alcantara in the correct places (nine and three on the steering wheel, and on the gear knob) and Audi’s Virtual Cockpit gives you a nice central rev counter, which lights up in a way that mimics racecar shift lights as you howl towards the redline. Perhaps that’s a gimmick, but it’s a fun one.

There’s also copious nice bits you can fit in here, including all the active safety, crash avoidance stuff we now expect in premium cars, even if speccing it is not as cool or desirable as adding carbon ceramic brakes.

Seriously. This is a hot hatch (or small saloon car) with a 174mph top speed and which has carbon ceramic brakes on its option list. It’s madness. Yet the end result is too classy and day-to-day useable to feel as crackpot as all that suggests.

Given you can expect to pay £45,000 when it arrives in the UK, that’s a jolly good thing. Expect the Saloon to cost an additional £1,000 or so, and those options to crank things up considerably. But I suspect as a one-car-fits-all solution, this would be a fine one. Especially now it’s got a sense of humour as standard.