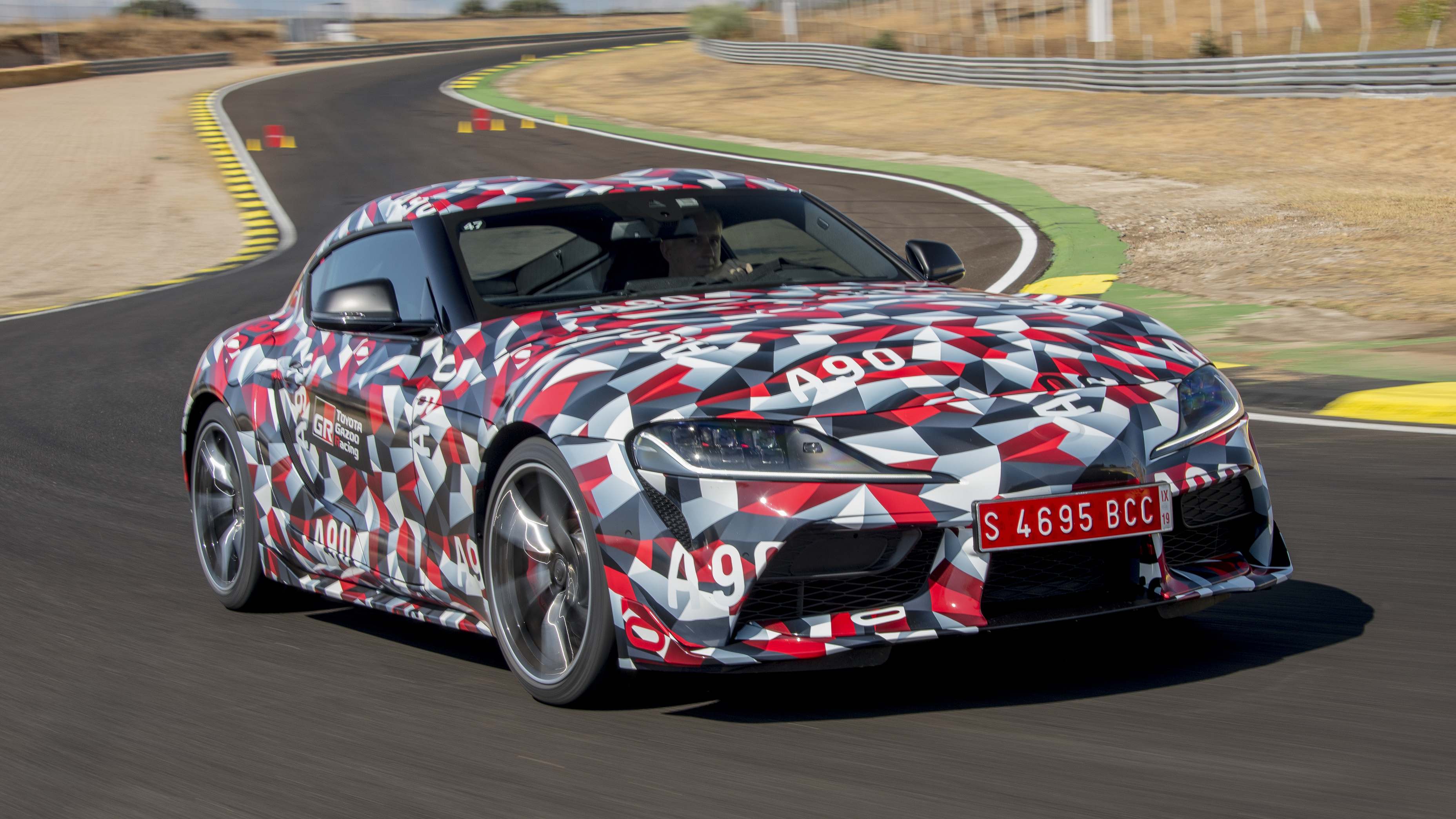 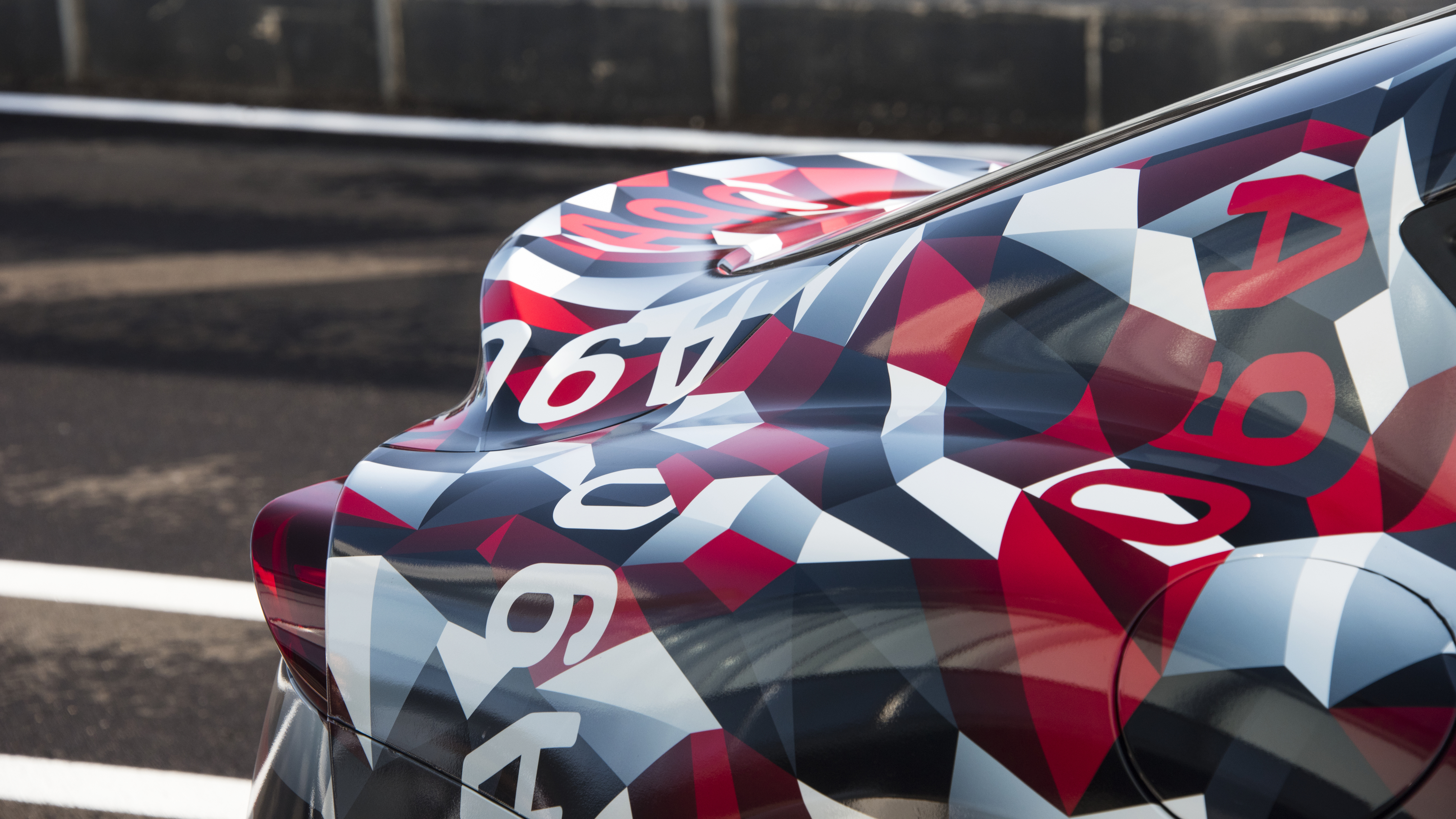 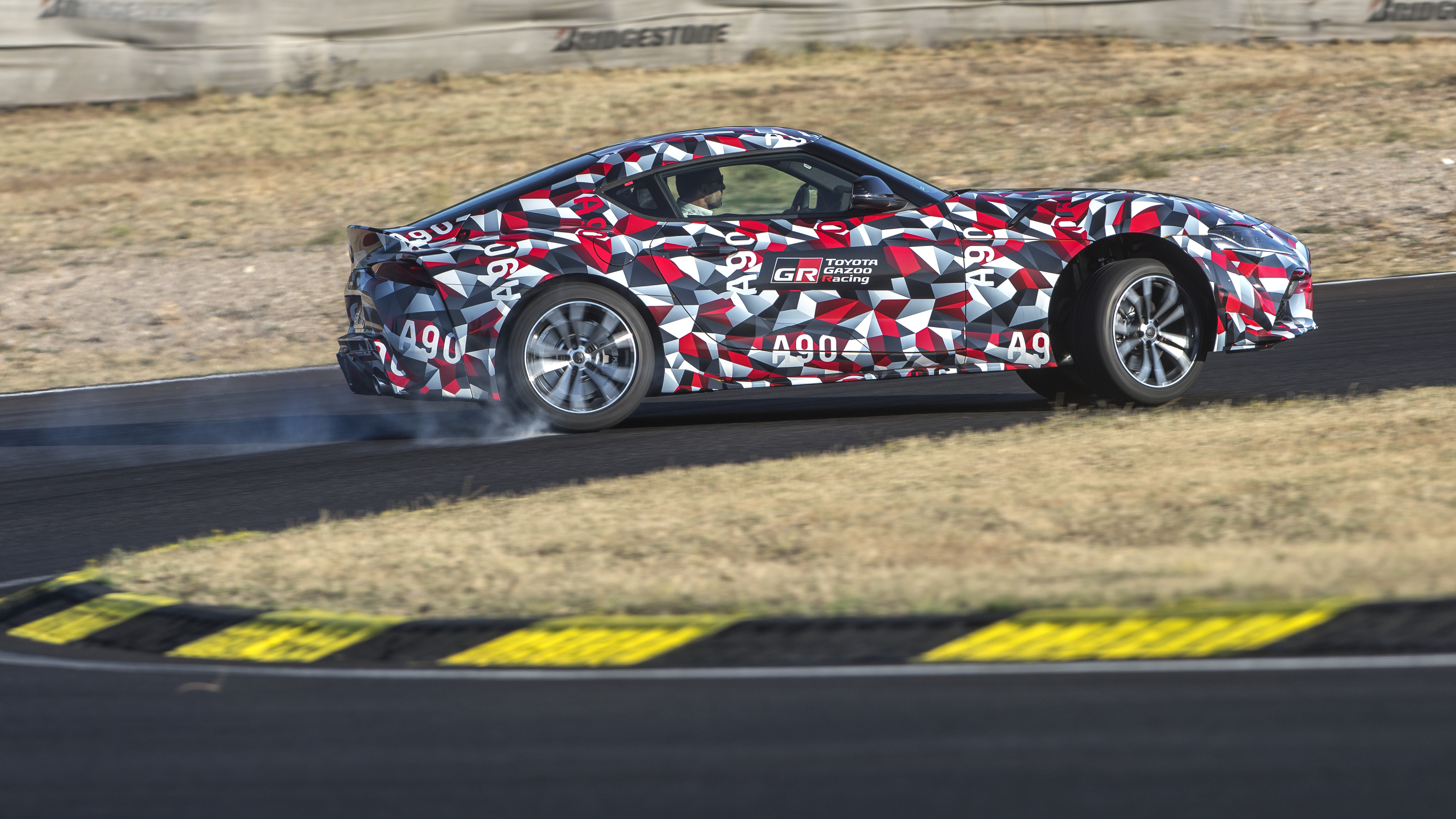 I know what that is…

It’s the car we’ve been waiting 16 years for Toyota to pull its finger out and build. A brand new Supra, the fifth-generation of a legend (sixth, if you want to throw the 2000GT in there as a spiritual starting point) and the car that could single-handedly revive the Max Power movement. Possibly.

Developed under a joint venture with the new BMW Z4, the worry here is that Toyota’s wild child might become a little too tamed, too Germanic. Can the Japanese still infuse it with the same sense of madness that made the car its name despite borrowing its underpinnings, engine, gearbox and most of the interior from BMW?

Never mind that, why’s it wrapped up like a Christmas present?

Ah yes, that. Although we’ve already seen its sister, the Z4, the Supra isn’t due to have its big unveil until early next year, hence the disguise. But make no mistake, under there is a final prototype, dynamically representative of the finished car and up close you can see and feel every vent, curve and badge beneath the wrap.

This is the deal - we’re in Madrid to drive the car and meet Gazoo Racing chief and father of the new 2019 Toyota Supra, Tetsuya Tada, the man also responsible for delivering the GT86. Fair to say he’s a bit of a Top Gear hero.

Now, we admit, these early drive opportunities can verge on the tedious, with more time sitting through presentations than getting hands on with the car. But today is different. Today we’re being given time on road and track, and lots of it – enough to really get under the new Supra’s skin, even if we’re not allowed to see that skin.

Toyota has agreed to give us some details on the car, but not all, saving some titillation for when the wraps come off in a few month’s time. But that’s OK. By Tada’s own admission this is a car that is more about emotion that numbers.

“We were pursuing numbers and profit margins, which are still important, but we’ve started to appreciate the value different cars can bring to customers,” Tada explains. “It all started when Akio Toyoda took the reigns. Numbers are one thing, but it’s the feeling that matters.”

So what do we know?

We know that the basic architecture is shared with the Z4, although Tada insists the company separated their development processes completely early on, to ensure they felt like very different products.

No performance figures yet, but the engine is BMW’s 3.0-litre, single turbo straight-six with over 300bhp (by how much is yet to be revealed), the gearbox is BMW’s eight-speed auto and it’s strictly rear-wheel drive. It has higher torsional rigidity than the Lexus LFA, despite using no carbon-fibre in either the chassis or body (to keep costs down) and it has a lower centre-of-gravity than the GT86 – no mean feat considering the ’86 uses a belly-scraping flat-four.

Without specifying what it is, Tada talks about a golden ratio between the wheelbase and the track-width that’s essential for building a pure sports car. The engine is fully behind the front axle making it officially front mid-engined and helping towards a perfect 50/50 weight distribution, the brakes are four-pot Brembos, there’s an active differential at the rear and there’s a choice of passive of active dampers, the latter sitting 7mm lower to the road.

Interestingly, although the car has been worked out on the Nürburgring and ice lakes in Sweden, 90 per cent of its development has been done on public roads, which speaks volumes about where Toyota expects this car to be predominantly used.

“The Porsche Cayman was the benchmark from the start,” Tada tells us. He admits that there’s an intrinsic weight and dynamic advantage to a mid-engine layout, but says on the track “we’re in the same zone.” He also tells us how “disappointing” the 718’s sound is, “the GTS is even worse.”

So why not just make the Supra mid-engined? Truth is, he almost did. “In the planning stages we suggested a mid-engined layout and BMW was happy to go with it, but I took the idea to Akio Toyoda and he told me off.”

Tricky to say at this stage, but given how striking both the 2014 FT-1 concept and the 2018 Gazoo Supra Racing Concept are, our hopes are high. Get up close and you can see big haunches muscling out at the rear, a double-bubble shape to the roof, a ducktail boot-lid spoiler and simple but effective twin pipes at the rear. Get your nose right up against it and you can spot every slash, every vent even a scribbled Supra logo on the boot lid.

Bottom line, from the outside it looks a lot meaner than the Z4, from the inside the similarities are more obvious. Toyota tried its best to obscure the interior with bits of flappy carpet, but it wasn’t too hard to sneak a peek. While the instrument panel is unique to the Supra, there’s a lot of BMW elsewhere – all the switchgear, central screen and steering wheel is unmistakably from Munich. But let’s be brutally honest here, have you seen the GT86’s insides? BMW’s quality is on another level.

Again, hard to say having not driven the Z4, but it’s an engine we’re very familiar with, and the essential character is the same here. But hey, it’s also one of the very finest engine/gearbox combinations in the world, and although BMW did deploy it in the standard M2, it’s great to see it being used in a proper performance application – the way it responds, zings through the revs and stays composed and smooth whatever abuse you throw at it is a thing to be celebrated.

Our first proper go is on some spectacular, winding B roads outside Madrid. Toyota has brought along a GT86 too, for comparison, which is a great touch – if only to remind us how hilarious it is when you take it by the scruff of the neck. However, next to the Supra, the GT86’s powertrain feels a bag of gutless spanners. Helped by the slick gearbox, the Supra’s just so much torquier, smoother and sophisticated in every regard.

This is a car that you don’t have to thrashing to have fun in… but just to be sure, we stopped off at Jarama race track

With the GT86 flailing about in our rear-view mirror, we start to stretch the Supra and lean on it into the tighter turns. It immediately feels more substantial, broader shouldered, more keyed into the road rather than skating on top of it and less flamboyant in the way it goes about its business. Keep things smooth and that extra grip and power means a massive chunk more real-world pace, but it hasn’t lost its sense of humour. There’s more point and stick precision to the front end, but it still rolls a bit and feels organic in the way it responds to your inputs.

The steering isn’t loaded with feel, but it does weight up significantly as the loads increase – a useful indicator of how close the tyres are to letting go. The brakes are strong and progressive and the seating position, tucked low next to the transmission tunnel, is spot on. The basics, in other words, are superb – this is a car that you don’t have to thrashing to have fun in… but just to be sure, we stopped off at the newly-resurfaced Jarama race track.

Hooray! Time for some hooning…

Indeed. And, impressively, the cars waiting for us in the pit lane were the exact cars we’d just driven on the road – same Michelin Pilot Super Sport tyres, same everything. Driving modes are limited to Normal and Sport, while the ESP can be left on, switched to a halfway house Track mode, or switched off entirely.

Something Tada mentions in the pre-track driving briefing sticks with me – that this “isn’t a car for the less competent driver.” Within two laps, I’d have to disagree. It’s not that it doesn’t feel like a sharp driving tool, just that for someone new to the car and the track it feels friendly and approachable, easy to exploit, full of grip but with plenty of warning when that’s about to run out.

It bobs and weaves a bit more than track-specialised stuff, but that’s half the fun, it moves and you move with it, catching little slides, deploying the full travel of the throttle, pinging through the gearbox and enjoying the engine rasping away in front of you.

I’m sure 300bhp to 350bhp is a real sweet spot for something with combined road and track abilities – enough to unstick the tyres and throw some shapes, but not enough to punt you into the barriers with a badly timed twitch of your foot.

In the flat-out , high-speed corners, that pitch and roll can be a little unnerving, while I hope there’s a little more to come from the exhaust note. But as a rounded, beautifully balanced, one-size fits all sports car experience, Toyota has hit the nail on the head.

Tada tells us about the first time the big boss, Akio Toyoda, drove the car. He climbed out and told Tada, cryptically, the problem was he couldn’t converse with the car. So, Tada and his team went away and worked hard on upping the interactivity between man and machine until Akio was happy… and it’s that connection that shines through.

Isn’t Toyota worried tuners are going to ruin it with 1,000bhp conversions?

Far from it – it’s actually encouraging it. Tada is planning to release specs of the car early to various tuners so they can prepare their packages for the car. There’s also pre-drilled holes in the front for hanging high downforce front splitters from, and a reinforced boot lid to handle big wings on the back.

“The question I’m most frequently asked is whether you’ll be able to fit the 2JZ engine to it,” Tada tells us. “I tell them, absolutely, please go ahead!” But Toyota has no plans to make any big moves into the aftermarket modification area for the Supra itself. “We could go into it, but then you lose these grass roots parts companies and that could kill the space entirely – it needs to be creative to breathe.”

What about official faster versions in the pipeline?

Tada confirmed that a stripped-out, track-focused version is already part of his plan - expect it to be called the Supra GRMN.

“At some point I would like to make a track-limited Supra with less weight. We’re already making a racing version so we know if you take out 100kg it’s a completely different car – you don’t even need any more power,” Tada told us. Question is, will it be road-legal or a track-only toy? “We’re investigating both avenues, there’s always a trade-off because being road-legal brings restrictions.”

There are also whispers that a lower powered version, likely using BMW 2.0-litre four-cylinder turbo with 250bhp to 300bhp, could be launched further down the line. Possibly with a manual gearbox.

Yep. Sometimes a car just feels right. We got that feeling the first time we drove the new Mazda MX-5, the new Alpine A110, the GT86… and now this. Although a more senior proposition than the GT86, there’s a purity to it that hasn’t be lost.

Toyota is a company keen on rediscovering its fun side, with less emphasis on sales figures, more on the people who buy and enjoy their cars. Although much depends on the price (we predict something around the £50,000 mark) the name, the looks, the badge, the timing – it all seems to add up, and this was just the taster… there’s so many more details and more in-depth driving opportunities to come.