Jason Barlow
0
Full screen
1/8
The F12tdf? Isn’t that what Kimi Raikkonen was donutting on the Mugello main straight just a couple of days ago? Yep. We suspect he enjoyed it. And we know Sebastian Vettel definitely did, because TG.com just bumped into him at Ferrari’s Fiorano test track. Effectively a nastier version of Ferrari’s front-engined V12 flagship, the F12tdf’s big party trick is its four-wheel steering that, the engineers say, works in-phase with the front axle to dramatically improve high-speed stability and agility. Vettel is no stranger to these things, of course, but at 1415kg dry, the F12tdf is roughly double the weight of his SF15-T, this year’s F1 car. “Its high speed stability and balance are incredible,” he tells us, grinning. “It’s incredibly fast, but it’s the way it feels through turn seven here [Fiorano’s infamously fast sweeping right/left] that is so mind-blowing…” Is he right? We couldn’t have put it better ourselves. Besides, Vettel has a highly sensitive quadruple-F1-world-championship-winning-bottom, so who are we to argue? The F12tdf might be named after the 1950s 250 GT special that won the famous French road race three years running (1956/’57 and ’58) as well as the Targa Florio and other much-missed beardy classic events, but this new car is Ferrari on revolutionary ultra-fast forward. On which basis we’d say the name was something of a misnomer, but apparently Piero Ferrari himself decided it was appropriate and we don’t want to upset the dude. (But it’s not a turbodiesel, OK?) 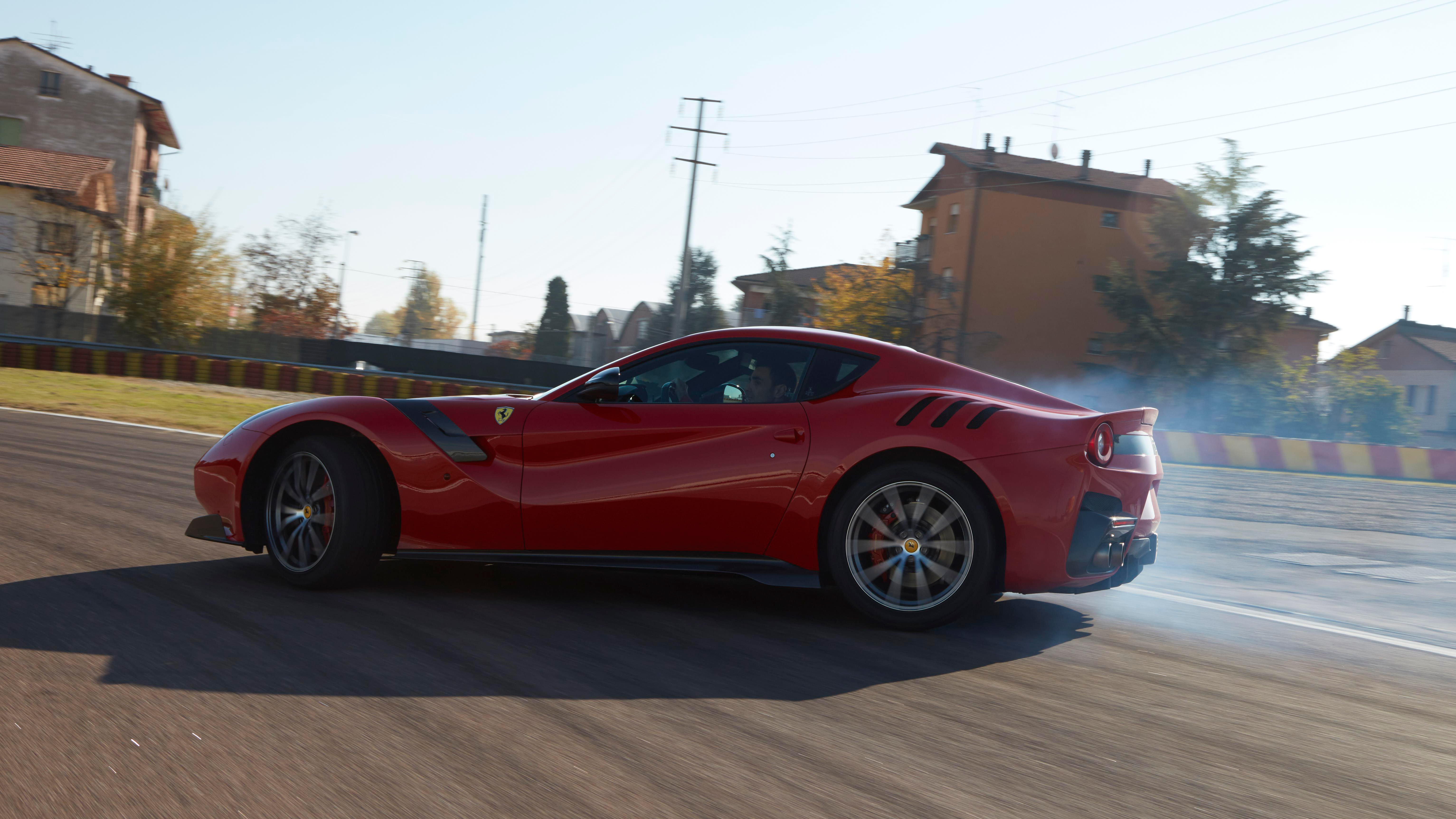 So what’s the deal? Given that the 488 GTB pumps out 661bhp and has easily enough real-world performance to seriously harass the LaFerrari hypercar, the F12tdf is on an intriguingly different mission. It’s exploring some pretty far-out thinking, taking Ferrari into territory in which it’s actively challenging itself as well as its clients. OK, so Honda had four-wheel steer on the Prelude back in the mid-1980s, and Porsche’s current 911 GT3 has an active rear axle. But following the deliberately tricky and frankly almost bipolar 599 GTO, the F12tdf sees Ferrari dabbling again in an area inspired by state-of-the-art avionics in pursuit of electronically enhanced super-manoeuvrability. “We’re at the frontier of new automotive technology,” Ferrari’s chief test driver Raffaele de Simone tells us. “It requires a clever driver to get the best out of it, not in terms of pure ‘feel’, but in being able to get the maximum out of the car. You cannot just jump in the F12tdf and go straight to the limit. You have to learn about what it can do. And you have to drive it in a very linear and precise way.” Like Kimi, then? Not like Kimi. At least not to begin with. Following a hot lap with Raffa, TG.com dived in and immediately started swearing very loudly. First impressions are of a car even more ballistically fast than the regular F12, but with sublime body control, phenomenal grip, and an electrifyingly pointy front end. You can definitely feel the active rear axle – Ferrari calls it ‘passo corto virtuale’ or ‘virtual short wheelbase’ – do its thing, and initially it’s distinctly weird, to the point of being rather unsettling. In ‘Race’ mode, the F12tdf is just amazingly fast and stable. Switch the guardians off, though, and it can be spikey until you’ve got your hand properly in. This is a car that wants to perform a Jedi mind trick on you. Either that, or you have to learn to use the force… Thank you, Obi-Wan. Can we have a reminder of the rest of the car please? The engine is the F12’s 6.2-litre V12, whose entirely unshabby 730bhp power output has been hiked to 770bhp. It can now rev to 8900rpm, and shovels out 520 torques at 6750rpm. The dual-clutch ’box has new tdf-specific ratios; upshifts are 30 per cent faster, downshifts 40 per cent quicker. It accelerates to 62mph in 2.9 seconds (sub-3.0secs is when elite supercars get to join the SAS), 124mph in 7.9 seconds, and it’ll keep going until 211mph. The brakes are from the LaFerrari, all manner of new aero-voodoo gives it 87 per cent more downforce, and the body has been reworked more profoundly than mere photos might suggest. Compare the rear side window with the standard F12, for example, and check out the redesigned rear screen. It has more rake, and effectively acts as a spoiler. There are dive planes, end plates, a bigger rear spoiler, and the carbon aero bridge on the front wings ‘flick boosts’ the air along the car. Amazing stuff. 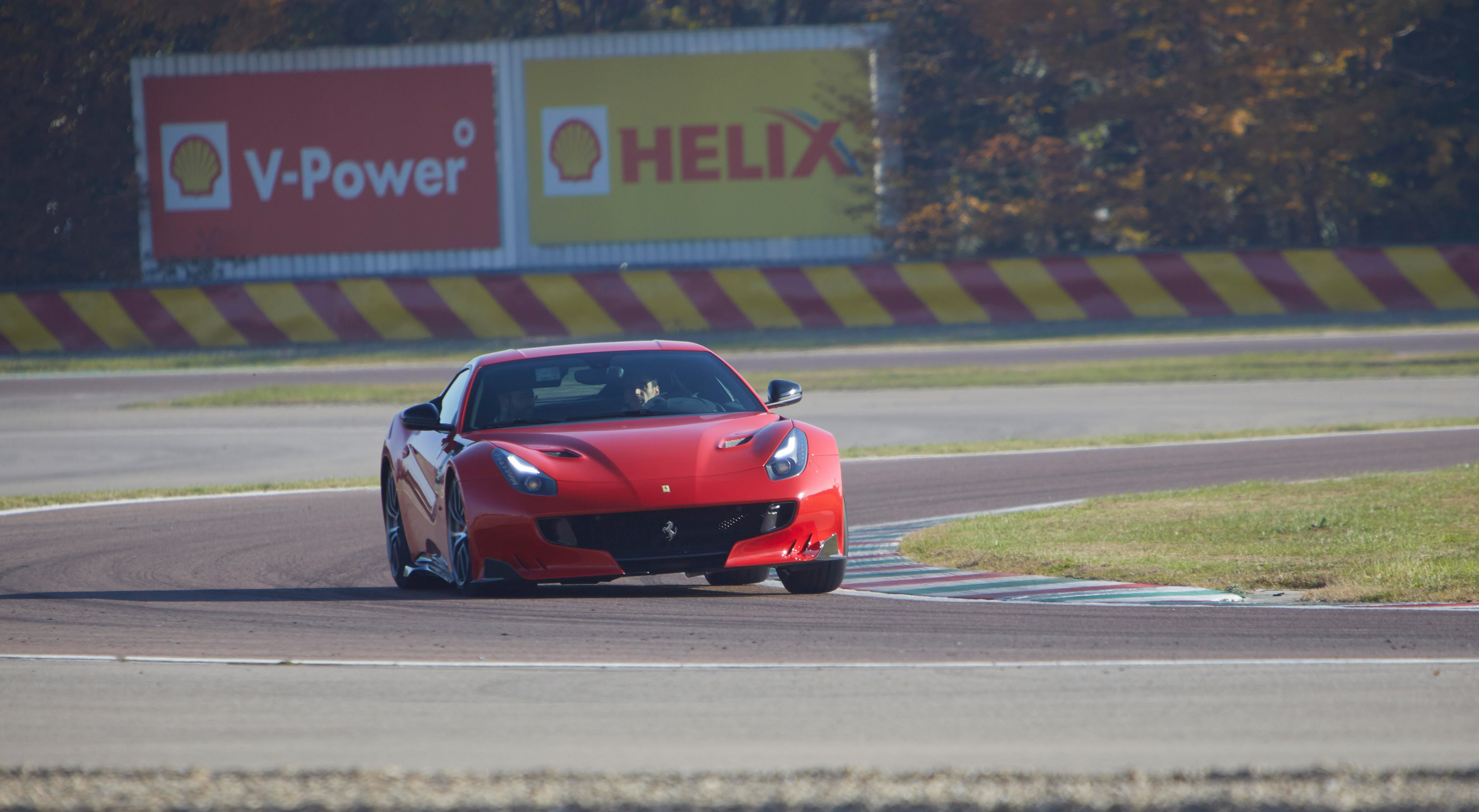 And inside? It’s not totally stripped for action, but there’s exposed carbon, and the seats are great. And apart from some low-rent exposed screw heads, it’s beautifully well made. There’s nothing like sitting behind the wheel of a big, front-engined V12 Ferrari GT to make you feel good about life. Even if you’ve only got the key for four hours. How does it feel on the road? Crazy good. It takes Herculean self-discipline not to travel at warp factor 10 everywhere, so addictive is the performance rush and so huge-sounding is the V12. Significantly, the tdf ties the F12’s body down more effectively than the regular car, and the way it changes direction on the twisty up- and downhill roads we know so well, 40 minutes from Maranello, is deeply impressive for a car this size, weight and configuration. It’s also beautifully damped, so you can carry silly speeds over horrible road surfaces. The front tyres – bespoke Pirelli P-Zeroes – have grown in size from 255 to 275 section, and although the actual steering is the same as the F12’s, the rear-steer, chassis electronics and e-diff enable you to pile in and out of corners in a way that should be impossible according to all established laws of physics. It has the neutrality, poise and agility of a smaller, lighter, mid-engined car, with all the thunder and colossal force of a large, normally aspirated V12. All in all, a technical tour de force. Problems? The usual. Firstly, the F12tdf costs £339,000. But even that’s academic, because all 799 have been sold. As usual, Ferrari can vet its clients, so the lucky recipients will already have at least five Ferraris in the garage. But they won’t have one quite like this. We’re not convinced every one of them will fall completely in love with the tdf, such is the slightly quixotic nature of its character, and it definitely needs more effort the faster you go. But it also rewards that effort in spectacular style.

Everything you need to know about cars this week: 9 May '21

A new Ferrari, plus we drive the new Defender van and hydrogen-powered Toyota Mirai

Porsche Taycan Cross Turismo - a 751bhp estate - versus a gravel stage. Bring it