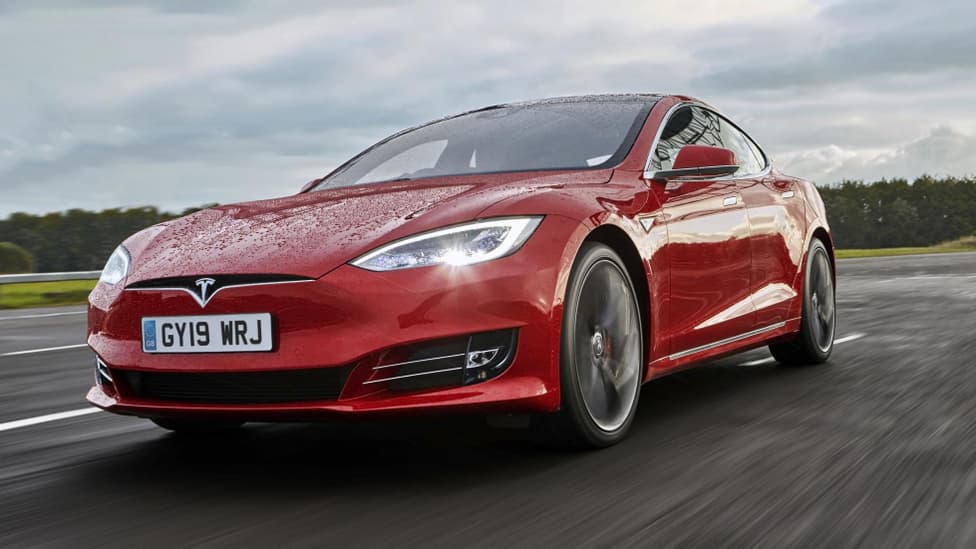 Indeed – it’s the Tesla Model S Performance. Tesla has – at long, long last – rationalised what it calls its cars. All that ‘Model S 75 / 85D / P95D+ / Ludicrous’ nonsense has, mercifully, been binned off.

For how long? Well, that’s another question. Tesla line-ups seem to last only a fraction longer than Chelsea managers these days. Here’s hoping it’s not fiddled with for a while.

So, what’s the line-up now?

There’s the Model S Long Range, and there’s this, the Model S Performance. There is no Model S ‘Standard Range’, incidentally. Just the two. Think of it as ‘the really quick one’ and ‘the stomach-troublingly fast one’.

And what’s the difference?

Despite both packing 100kWh batteries in the bowels of the chassis, the Model S Performance gives away 10 miles in range to the Long Range (365 miles plays 375), but mainly it’s all about speed. In the Performance, you get the hulked-up rear motor as well as the regular front motor, so combined power climbs from 554bhp to 785bhp. And thanks to an over-the-air software update for all post-2017 Ludicrous-spec Teslas, the Model S Performance is devastatingly quick. And it's a bit of a Q-car too. No bodykit, no stripes, no quad tailpipes. Obviously.

It is indeed a savagely fast car, but you know this already. Teslas have been uncannily quick since forever. So’s the new Porsche Taycan, so’s the Jaguar I-Pace, in its own way. We’ve seen that trick now, and we want new ones. Especially for a car that costs £91,800. That’s AMG E63 S money, and that’s a car that’s much, much more than just a straight-line monster (and yes, it would be utterly dusted by the electric American in a simple sprint).

Not unless you're in no hurry and don't need the air con. However, this isn’t an EV that suffers from range anxiety, simple as that.

Fresh from a full charge, our Model S reported 312 miles remaining, and even though it fell rapidly in the heat of multiple launches (and if you’re spending the extra £14,600 on the Performance, you’re going to be pulling that party trick more often than not), the Tesla’s range still nukes that of a Taycan Turbo or anything Audi, Mercedes or Jaguar can muster by a good 50 miles.

Then there’s the question of where exactly it was recharged before we got stuck in to ‘emptying’ that battery. A Supercharger, of course. In TG’s experience,, vastly more reliable and more numerous than other networks of charging towers.

Tesla’s investment in that infrastructure is simply unparalleled. No wonder some of the evangelicals are so tediously smug about it. The latest Model S can accept charge at 300 miles an hour. That’s a much more useful 300mph than a Bugatti, if you catch my drift.

What else is exciting?

If you’re into gimmicks, then revel in the updates of all the latest games and Easter eggs from the Model 3, now available in its bigger, old brother. Want to engage fart-mode or play arcade racing simulator using the actual steering wheel and pedals to control your Mario-alike kart? You can in the S now, too. Even though the portrait touchscreen isn’t as conducive to some of the games as the Model 3’s landscape tablet.

Well, there’s not much that’s new. Or rather, I’ve a growing sense Tesla should have done more with the Model S’s chassis to keep up with its rampant performance. The body control is shoddy, with the car floating over crests and rocking side-to-side in a fidgety motion when you just want it to cruise, on Autopilot or not. The brake feel is dreadful and their staying power pretty ropey, and the steering’s lifelessly remote. All told, it’s pretty alarming if you try to drive a Tesla as quick as a £100k super-saloon should have the capability to be driven at. Maybe it’s a safety feature.

We’re not asking for Caterham levels of feedback here – goodness knows a two-tonne BMW M5 has an element of a runaway train about it at times – but it feels far more professional than the Model S. In the Teslas, you stab at the throttle and then have to sort out the lurches and heaving afterwards.

When we were all first blown away by this car’s punch back in 2013, that was more forgivable, but in the car world – not the tech world – the game has moved on, standards have been raised and the Model S feels its age as a car, even if it doesn’t as a computer.

But haven’t Teslas always had a whiff of the ‘they’d rather be driving themselves than letting the human interfere' about them?

Sure, but now there are rivals, like the Taycan. And much as Tesla disciples don’t like to admit it, their icon has been pretty triggered by that arrival. Otherwise, why the sudden and unprecedented interest in building one-off prototypes to set Nürburgring records?

All told, the Model S is still the most viable, most painless-to-run EV in the world, thanks to those Superchargers and its sheer battery capacity and motor efficiency. It's not the most satisfying, though. So you’ll miss out on nothing by sticking with the £77k Long Range version. Or, to be blunt, saving twenty grand and getting the extremely spacious and much less ungainly Model 3.