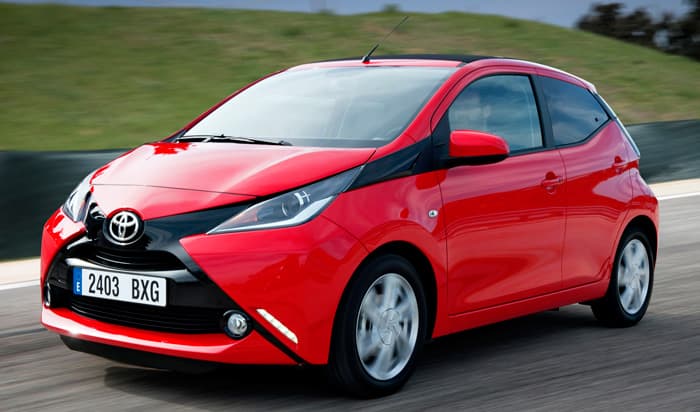 In 2005 when the original Toyota Aygo was launched, it had just nine competitors. This year, Toyota reckons it will go up against 20. That shows a) how old the Aygo is, and b) the fight the diddy Toyota now faces.

Lucky then, that new Aygo is a Japanese manga super-robot! No, seriously. The car's chief engineer - David Terai - told us he grew up watching Astro Boy, and wanted to create a car as iconic and simple as his boyhood robot hero. If this isn't brilliant, we'll eat our comic books.

That smart new X face represents Toyota's emergence from beige conservatism, manifesting its new-found philosophy to stand out from the crowd without fear of scaring off the elderly. Toyota wants its sexy back. There's even a double-bubble roof, for goodness' sake.

There's more funky playfulness inside, with customisable interior trim (the rear bumper insert and X on the front are customisable too - yes, really), and a touchscreen that's quick to respond and is compatible with Android and Apple phones.

Underneath, it's less radical, with the Aygo carrying over the front suspension from the outgoing model. The springs and dampers have been retuned front and back, though, and the anti-roll bar rigidity has been increased to help it ride and handle more sweetly. The rear torsion beam set-up is also 3.3kg lighter than before.

The first thing you'll notice about the new Aygo is the ride comfort and calmness. At motorway speeds, you'll no longer require a megaphone/hearing aid to conduct ordinary conversations, nor a visit to an osteopath after repeated B-road excursions.

And on those B-roads, you'll still have a blast, because the Aygo is fun to throw around. The steering is quick (in fact, the electric power steering is now 14 per cent quicker), and the chassis moves around predictably underneath you, front tyres gently squealing ‘Nope, not gonna happen' during heavy cornering. It's hilarious.

The 1.0-litre 3cyl engine is still a characterful little unit, chuntering along at its own pace. It remains unchanged, and features stop/start, exhaust-gas recirculation, a low-friction timing chain and a touch more torque. Economy and emissions are both a fraction better (around 3mpg more and 4g/km CO2 less in the manual).

It's a great car, the new Aygo - dynamically the same as the C1 and 108 with which it shares its base (Toyota told us it did all the drivetrain and chassis engineering) and, with a predicted four-star NCAP rating, safer too. But competition is fierce. Forget all 20, there's only one the Aygo should be concerned about, and that's the rear-engined, rear-drive and cute-as-hell Twingo. Astro Boy vs Asterix?