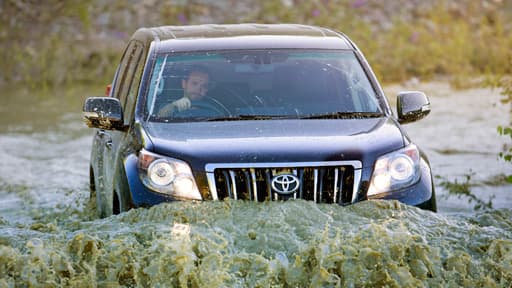 Let's get straight to the point - if you live somewhere in the world where tarmac roads are hard to come by and you measure annual rainfall in metres, then the Toyota Land Cruiser is the car for you.

Here in the UK, of course, tarmac isn't in short supply, and so the Toyota Land Cruiser isn't terribly well suited to our particular market. But the Land Cruiser is now sold in 188 countries around the world, and the vast majority don't really care about what it's like on the road. So Toyota has bucked the recent SUV trend by focusing on off-road ability more.

The proof lies in the very traditional body-on-frame construction, which is fantastic for the muddy stuff. Further evidence of this philosophy can be seen in the length of the new Land Cruiser. It has the same wheelbase and rear overhang as the old one - most cars these days grow quite a bit from one gen to the next, but if you make something longer, it won't go up hill and down dale as well.

The flip side to all this is that the Land Cruiser is a bit rubbish when it comes to on-road manners. The new Land Cruiser has a 4-cylinder, 3.0-litre diesel engine with 171bhp and 302lb ft, but in nearly 2.5 tonnes of car, it's not powerful enough. It's OK once you're up to speed on the motorway, but overtaking anything is tedious. The Land Rover Discovery with the 3.0-litre TDV6 weighs 2583kg but has 241bhp and 442lb ft - enough said. The Land Cruiser's refinement isn't a patch on the Disco either, because if you so much as breathe on the accelerator it rattles away far too much for a modern diesel.

The ladder chassis doesn't do anything to enhance the pre-industrial feel either. Even on this top-spec LC5 with rear air suspension, the Land Cruiser's ride is poor and never settles down. There are three suspension settings, but you can't tell much difference between them. And none of them is comfortable. Over a bumpy back-road, the Land Cruiser is constantly fidgeting and doesn't iron out any of the surface imperfections - the Discovery is like a magic carpet in comparison.

It's not involving though. You don't expect an off-roader to make you feel like a driving god, but you never feel intimately caught up in the process of getting anywhere.

Which is odd, because when you're off-road, the LC takes on a whole new personality. All of a sudden, you're at the heart of the action, able to feel exactly what the car is up to. It keeps you right up-to-date as to what is going on at the wheels. Tiniest slide to the left on some mud? You immediately notice and correct. It's all surprisingly intuitive and really shows where the Land Cruiser is happiest.

The engine also comes into its own here, because the low-down torque allows you to simply crawl forward and clamber out of tricky situations. Following the lead of the Disco, there are various settings for the engine and gearbox depending on what is required. There's Multi-terrain Select with four different modes to choose from (mud and sand, loose rock, mogul and rock), in addition to which you get a crawl mode with five speed settings for clambering over rocks or descending a hill slowly. Toyota has also fitted a centre and rear diff lock. There are even four external cameras so you don't have to get out to see what you might be about to hit.

The switches could be more logical though. Some are controlled on the steering wheel, others are hidden away behind it, and yet more are low down on the centre dash. The Disco's set-up is far clearer, and the rest of the Land Rover's interior is similarly better. Overall, it simply feels more modern and more worthy of your 40-odd grand.

As in the Disco, you get seven seats as standard on the LC5, and unusually the rearmost ones are electric. These are totally automatic to fold or raise - even the headrest stows itself at the touch of a button. You could get a pair of adults in there for a short journey without having to amputate, but the boot behind is pretty tiny with the seats up.

It seems unfair giving the Land Cruiser a kicking. It's so perfectly executed for its raison d'être that it should be the best thing we've driven all year. But the problem is the Disco exists. And for most people in this country, who don't live four week's drive from the nearest dealer, the Landy is the obvious choice.