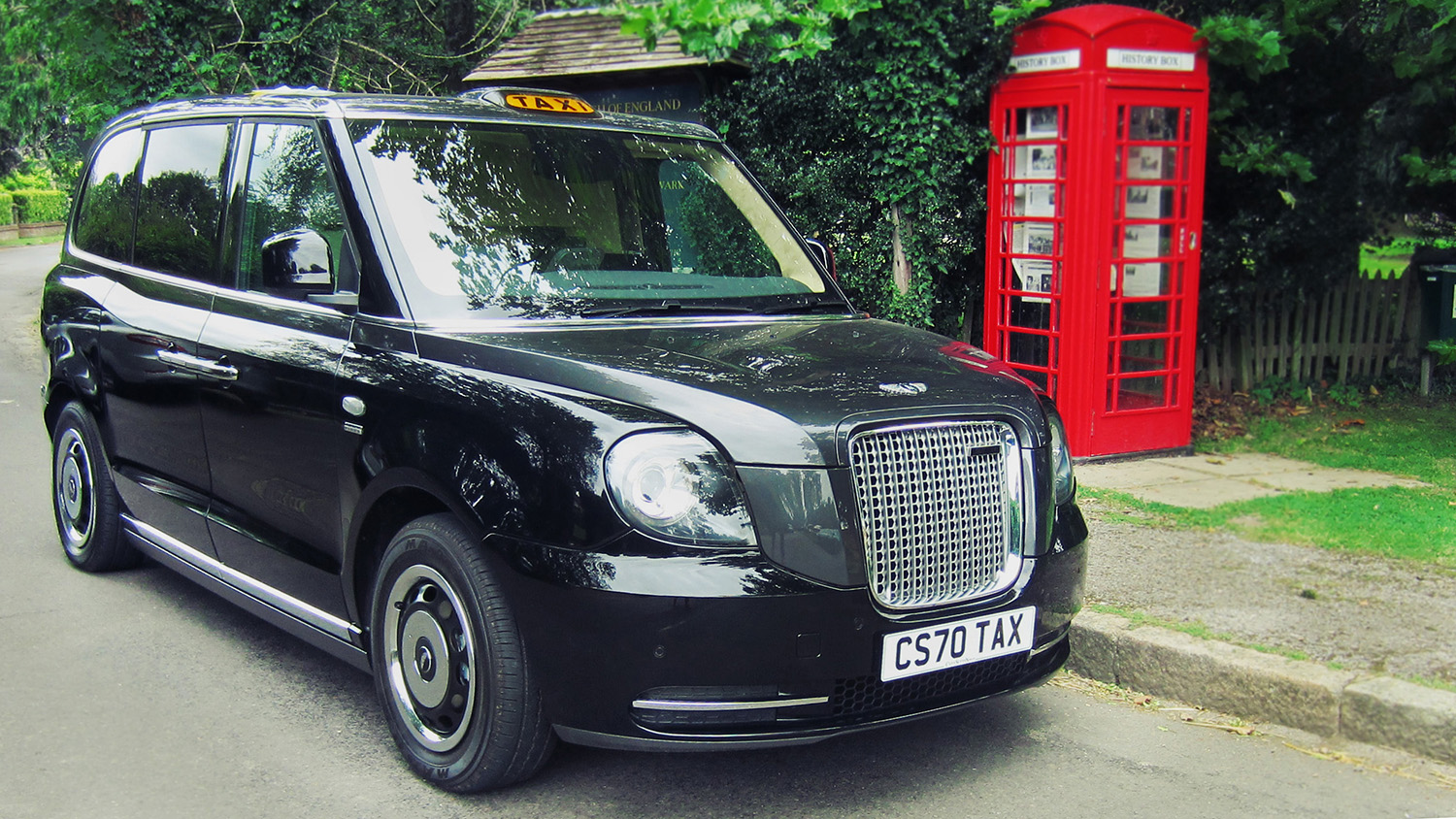 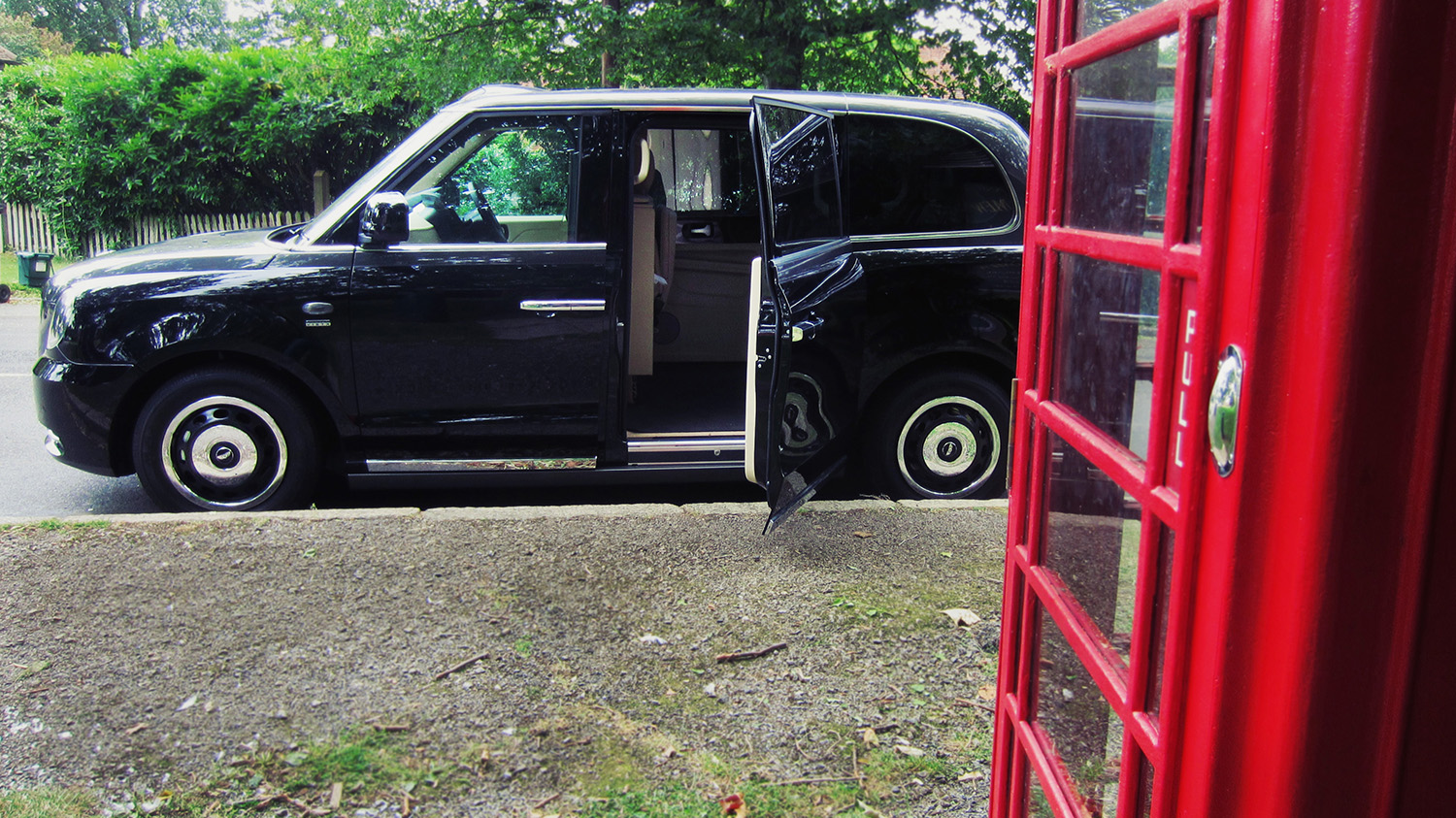 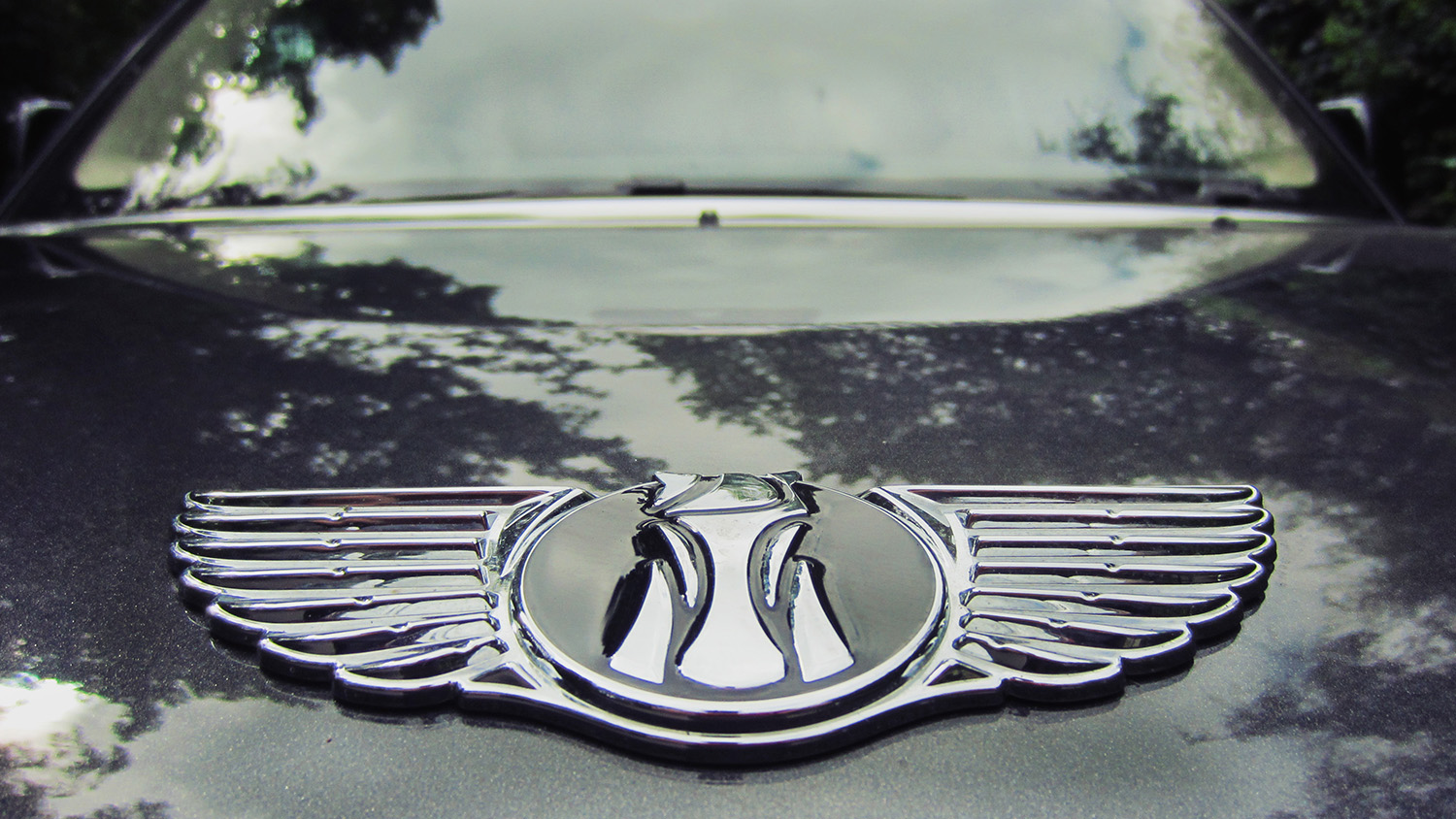 And that’s the genius of this new coachbuilt cab from luxury specialist Clive Sutton – it’s the stealthy option for the super rich. On the outside to all intents and purposes a normal Coventry-built LEVC taxi, but on the inside it’s got all the luxurious pizzazz of a Bentley or Rolls. Literally, they've bought a load of the interior stuff from Bentley and Rolls.

Sutton says that its VIP taxi is like a private jet for the road, which might be over-egging the pudding a touch, but at least it’ll get you to your jet fairly comfortably.

We’ve had overt displays of luxury from the likes of Maybach, Rolls and Range Rover – is incognito luxury now the thing? Taxi drivers in central London all recognised the Sutton as being out of place, but it didn’t stop three separate people from trying to hail a ride. Would’ve been a nice little earner if we’d remembered the card machine.

Very much like a taxi – the commanding view of the road has been retained, as has much of the Volvo-based infotainment and stuff that you touch. The driver still gets a taste of the Alcantara headlining and Bentley-sourced leather, and the electrically adjustable seats help you to get comfortable for a long slog through town.

The steering is unrelentingly firm, but then the car also has the most magnificent turning circle you’ve ever experienced. You'll find yourself feeding the wheel ever-so-carefully through your hands, careful on the controls, mindful of the ride in the back. It does get a bit claustrophobic in the cab, with the pressure of expectation and wall of expensive fabric looming behind you, and a centre console that sits high alongside. Lovely view out of the front though – you sit high up, peering down on anything but the largest SUVs and vans.

The car is powered by the standard taxi’s 110kW electric motor, and there’s a 1.5-litre 3cyl petrol motor ready to generate more juice once your 80 miles (ahem, more like 50 miles) of range run out. The car takes off sedately from a standstill, the torque feeding in gently so as not to disturb anyone. 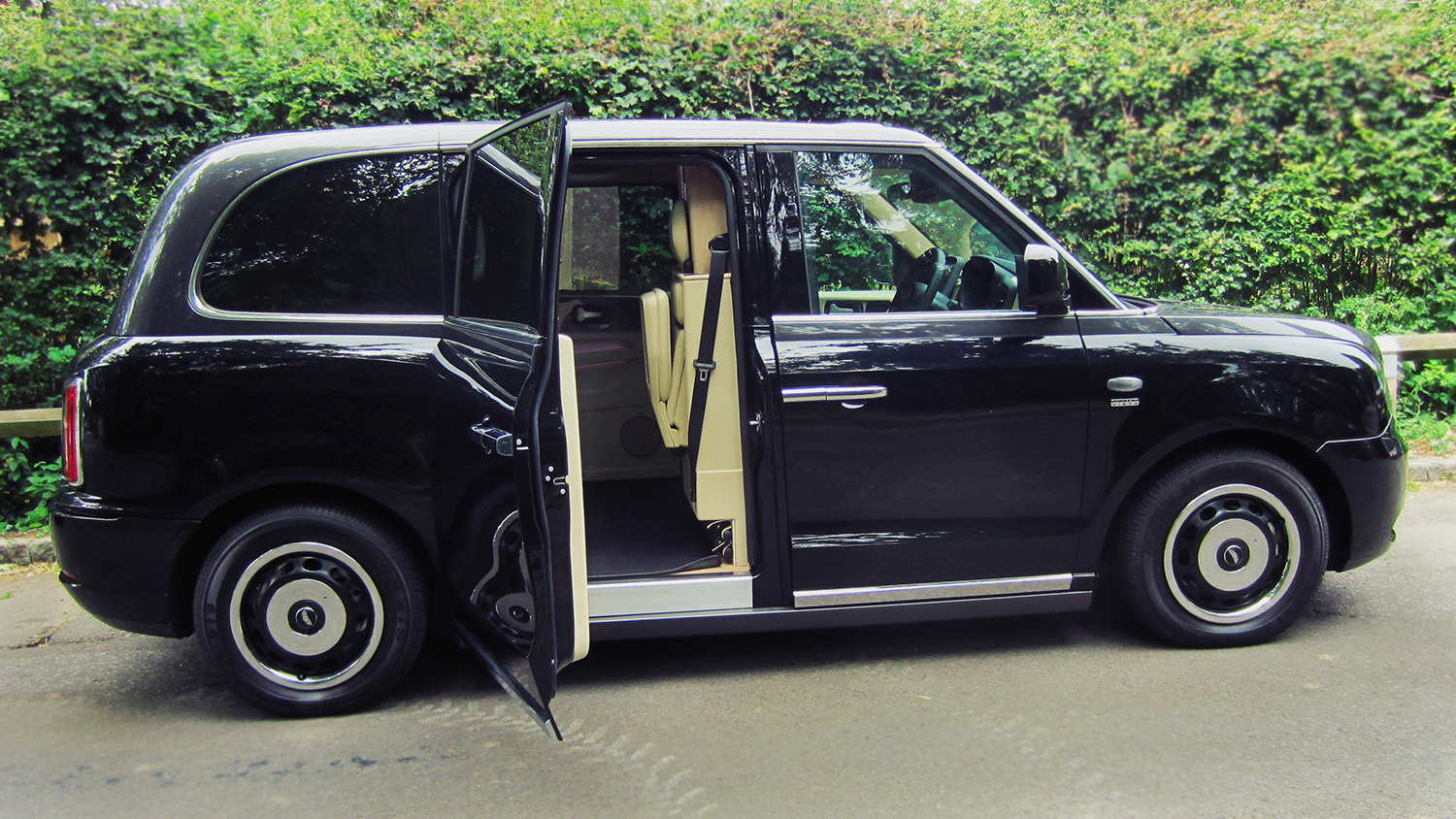 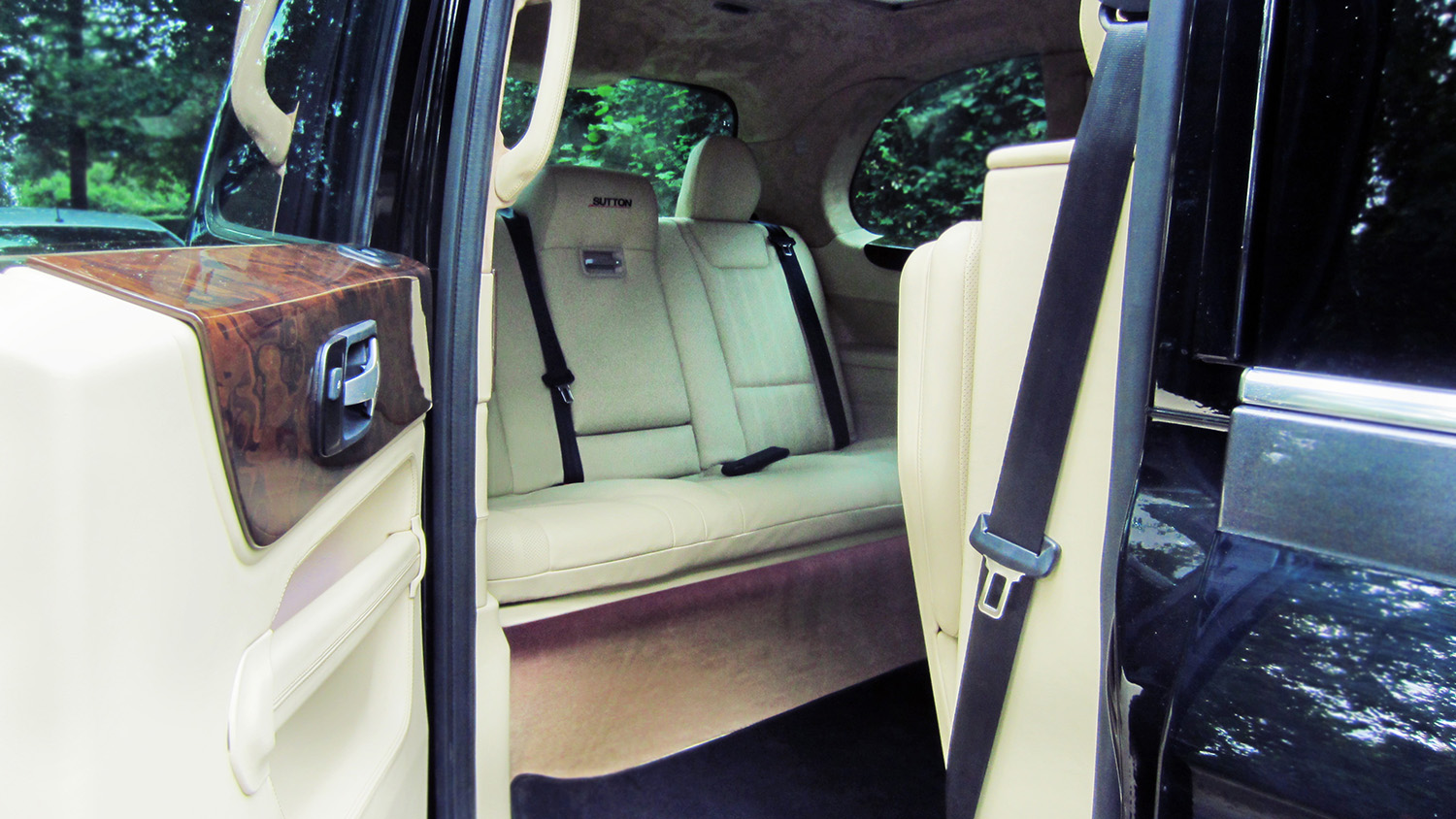 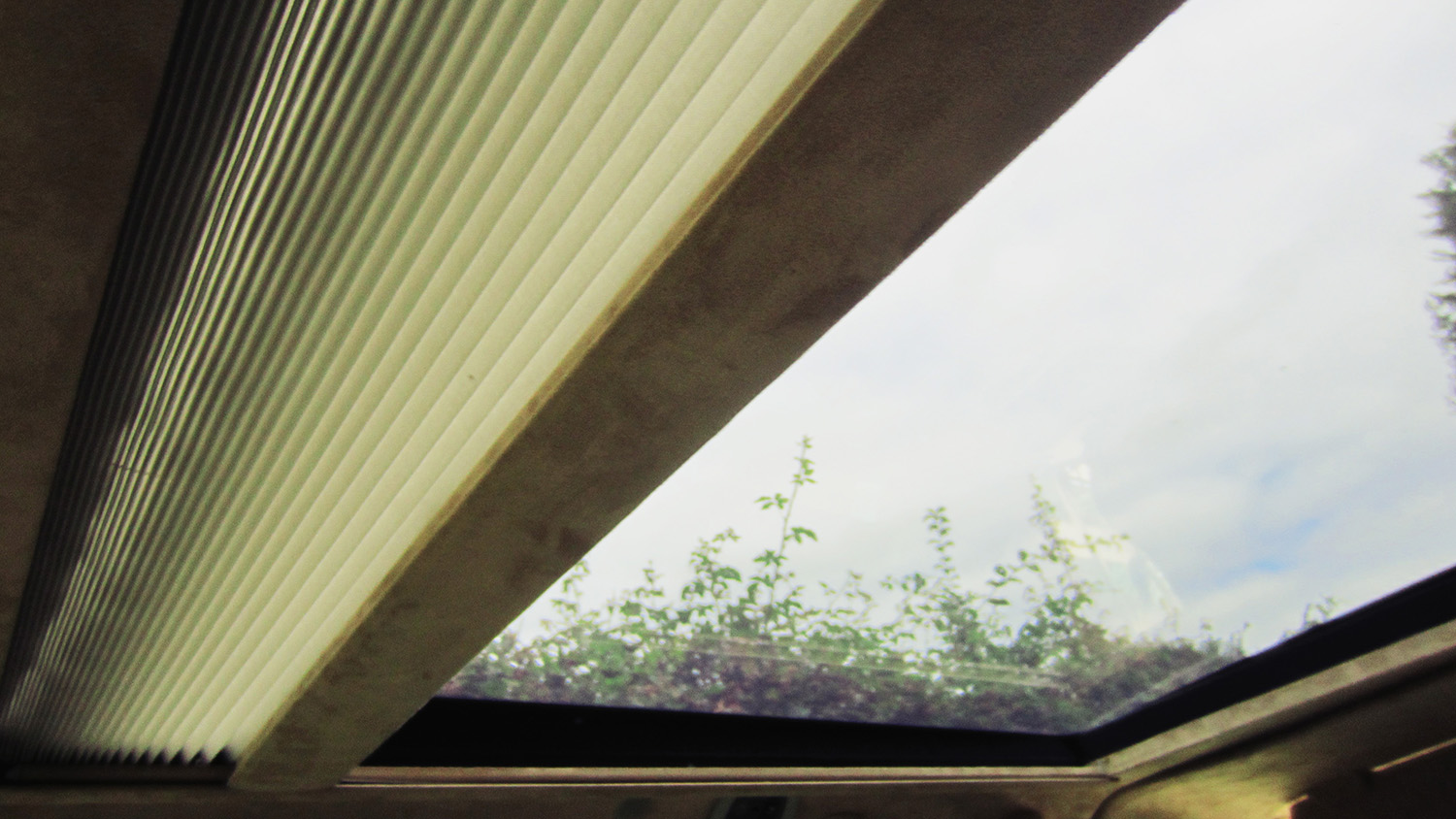 This is more the question, isn’t it? Who really cares how the driver’s getting on? Sutton’s expecting to sell these to ‘ultra-high net worth individuals’ (really rich people) and even has a few exotic hotels lined up to ferry pampered guests to the shops and that in novelty British-themed luxury.

It’s really very nice in the back of the Sutton taxi – the ride keeps things well insulated, even if there is quite a bit of pitch and heave from the generously sprung suspension – and you sink back into buttery leather chairs with more legroom than you know what to do with.

First thing is to play with all the buttons. You’ve got an intercom to speak to the driver, the window switches have been moved closer to you so there’s no exertion required, and an exciting button marked ‘door’. The engineers who put this car together have managed to nab the door closing mechanism from a Rolls-Royce Ghost – hold that button down and the door swings shut with an immensely satisfying thunk.

Elsewhere you’ve got a switch to turn the lights on around the vanity mirror, a button to open and close the fabric blind on the panoramic roof and there’s even a three-pin plug that sits just above where the two large umbrellas are held in place near the plush carpet. There are various draws and cubbies in front of you while you’re sitting down, as well as an actual fridge for keeping your credit card chilled.

Wait, is that a television?

Yes, all 20 magnificent inches of it. It’s set up for Apple TV and you’ll find the remote hidden in the central armrest on the car we drove – right next to the control for the ambient lighting in the cabin, which can be set to a pulsating disco speed if you feel the urge. You can also tap into a camera on the front of the car so you can see where you’re going and suggest a better route to the driver.

You can set your phone up (as long as it’s got the right fruit on the back) to send stuff to the telly, music or video, and there’s a HDMI socket in there somewhere for plugging other stuff in. For a few extra pounds (alright, a lot extra pounds) Sutton will even plumb in a games console for you.

So how much will it cost?

The standard car will cost you £104,680 on the road – the car we drove had the optional exterior VIP package at £7,800, which gives you a tasty Rolls-Royce-style two-tone paint job and a fancier grille. If you want the doors that close at the touch of a button then £8,400 is really an investment in your own future happiness.

If you want to play around with the standard five-seat layout in the rear then that adds a bit of cost too. We’d probably spend the £6,720 they ask to replace the rear bench with two individual reclining chairs and a table that folds out of the centre console.

Objectively, no. Why have something with an interior borrowed from a Rolls when you can just have a Rolls? But then you’ve probably already got one and besides, this is a bit of fun. Like novelty slippers for billionaires.

Actually, we heard that one of the buyers plans to register his VIP taxi as a real one and will hire his own qualified taxi driver full time so that he can shave a few minutes off his central London drives by going in the bus lanes. Worth getting your own cab just for the privilege, isn’t it? Time is money and all that.