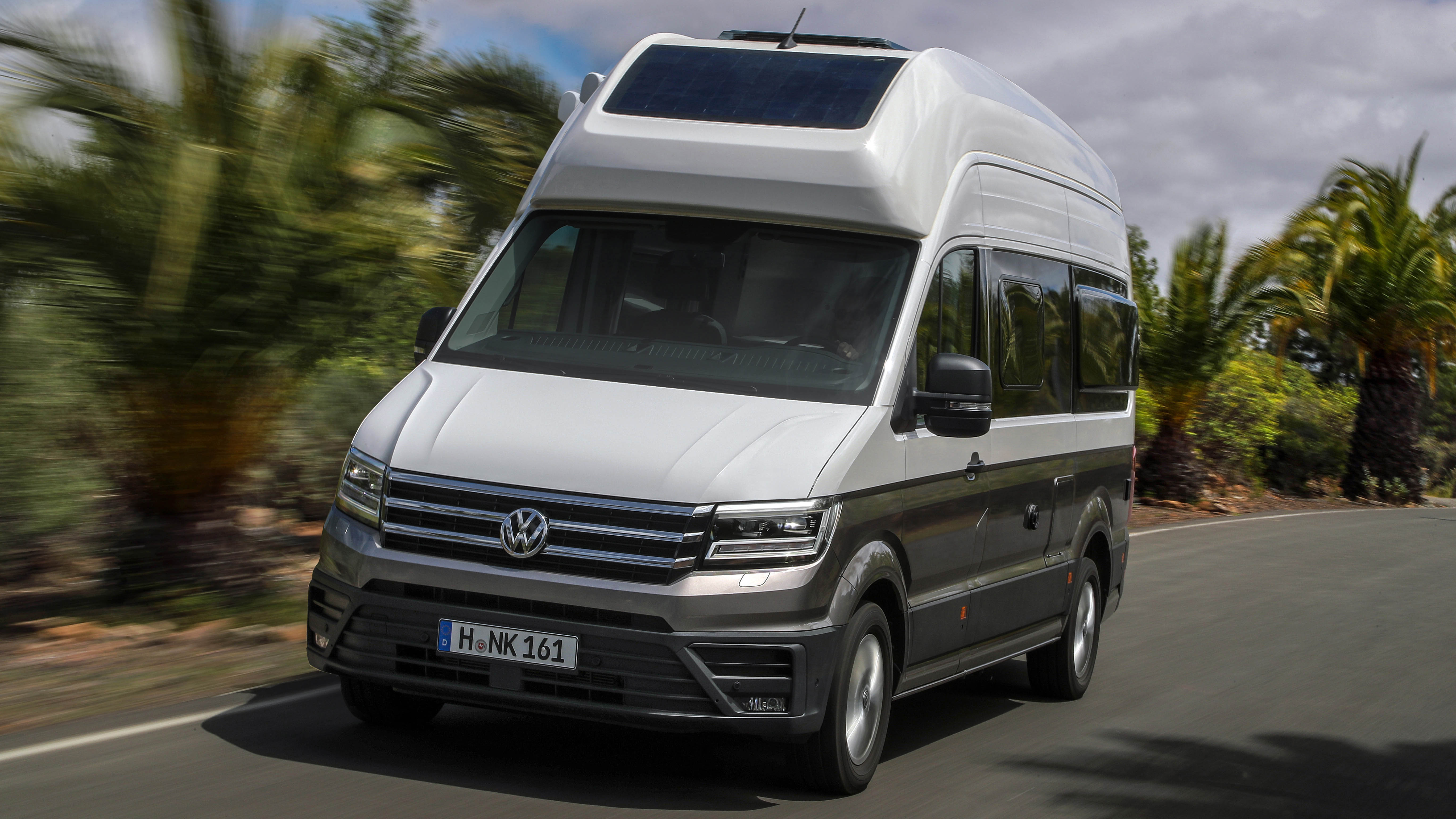 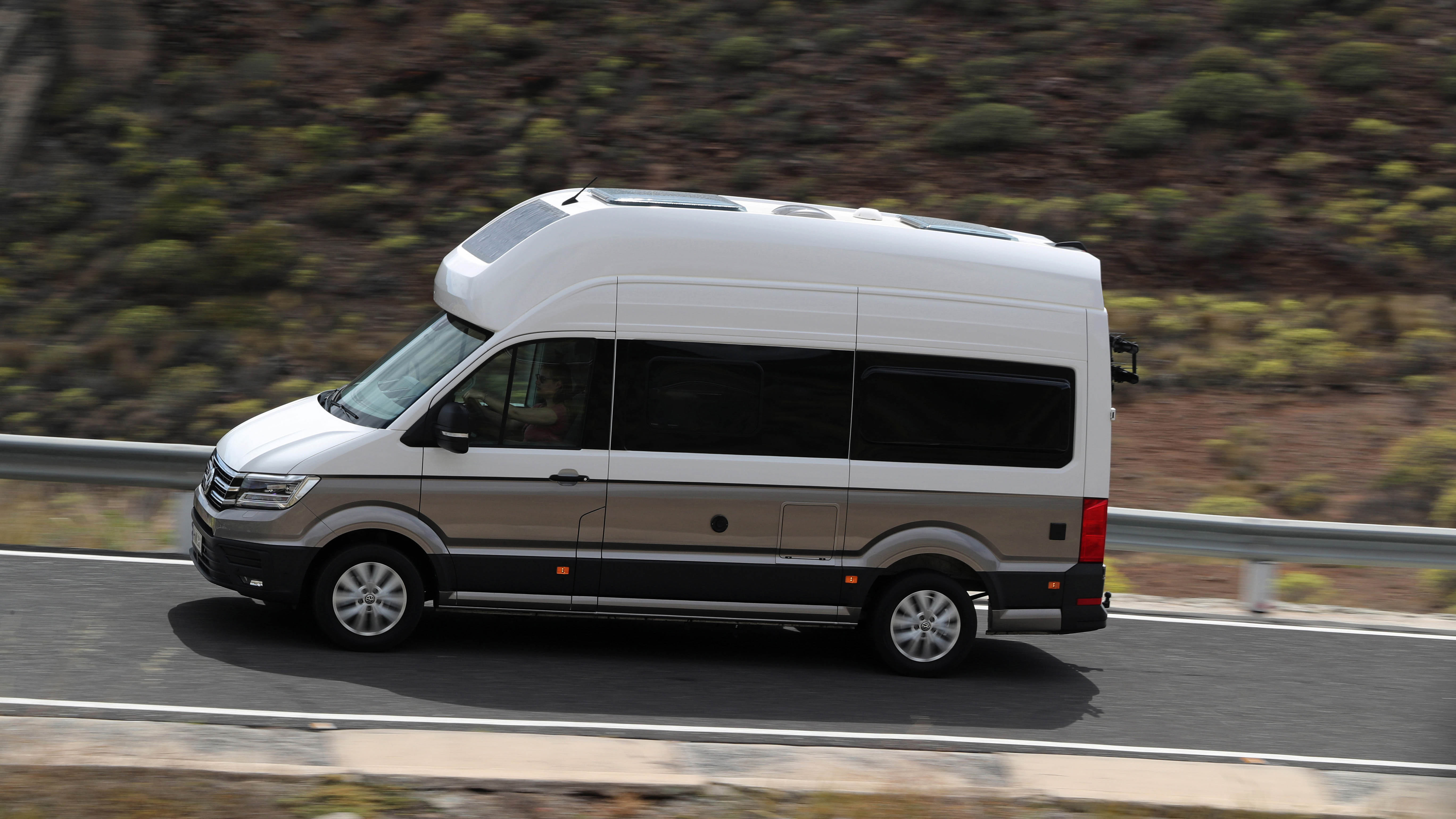 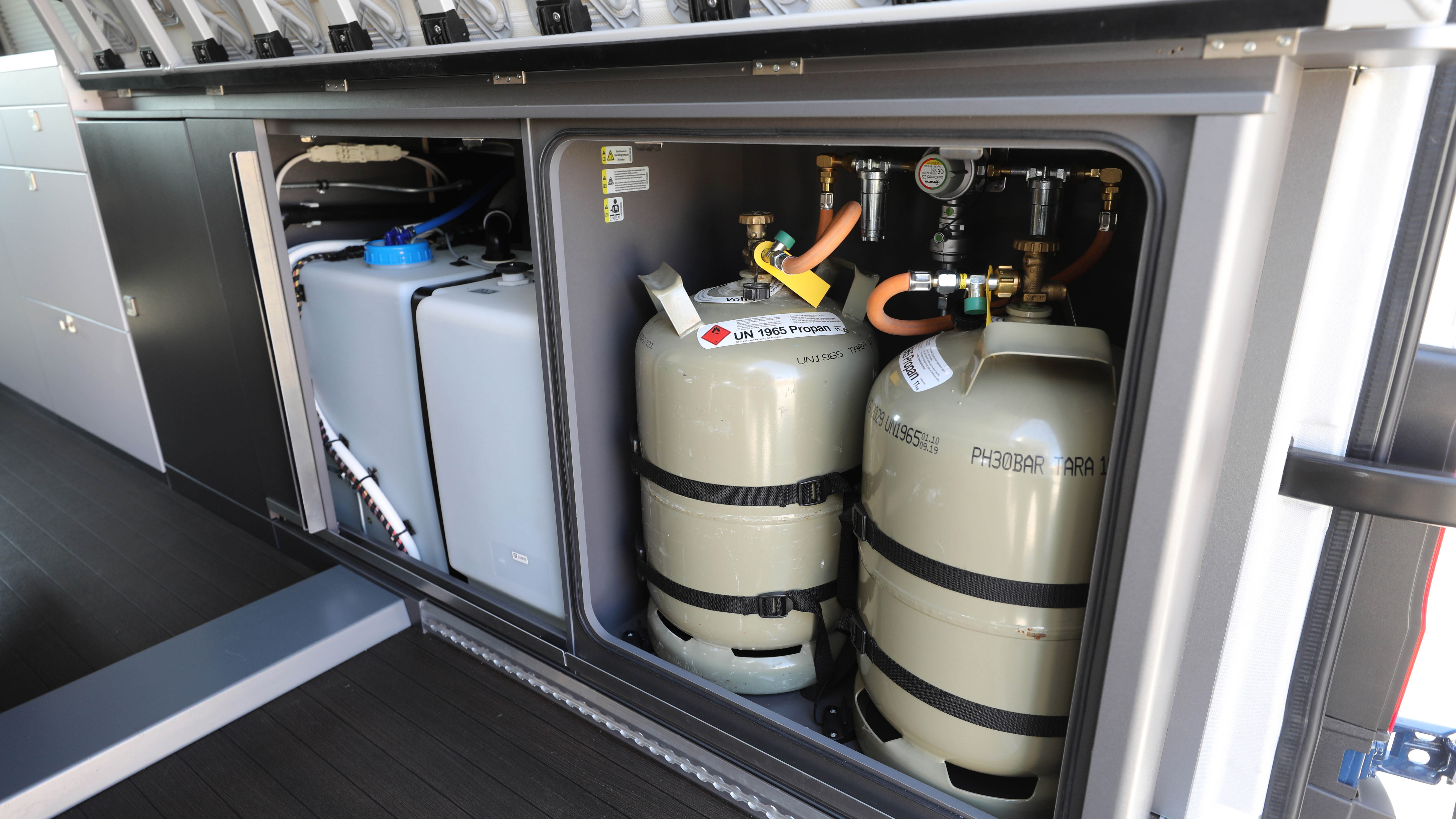 Yes, well, in this case we’re making an exception. Because this is the new Volkswagen Grand California, and it’s a bit of alright. In short, Volkswagen has taken the successful formula behind the Transporter-based California and applied it to a completely new, larger camper, based on the Crafter van.

The result is Volkswagen’s biggest camper yet, not to mention its most luxurious. Volkswagen says the Grand California’s interior design has been inspired by yachts, with white cabinets and flooring that apes a teak deck. The headline news, however, is a toilet.

Indeed. Until now, the California has never had a loo. Volkswagen has maintained it never needed one; California buyers tend to pitch at campsites and use their facilities to do their oblutions. But Volkswagen’s also aware it’s missing out on those vanners who’d rather be more independent, or families who’d like to plan longer trips away.

So the Grand California is here to fill that void. There are two models available: the six-metre long 600, and the 680, which is – that’s right, clever clogs – 6.8 metres long. The 600 is available with two or four berths, while the 680 is strictly for two.

Surely that isn’t right – the longer one must be for more people?

It is, actually, because the 600 comes with an extra high top, in which those two extra berths, in the form of a drop-down bunk bed, can be located. That’s how you can tell the difference; apart from the extra length, the 600 is the one with that weird fibreglass growth above the front windscreen.

The 680, on the other hand, is, outwardly largely identical to a long-wheelbase, high-top Crafter, and while it does without that extra bunk, you do get a much bigger – effectively full-size – double bed in that extra-long rear section, and a bigger kitchenette, allowing two people to tour in even greater comfort.

Oh yes. The suspension is pretty good for a van; even truly rotten bits of road struggle to upset the Grand Cali’s composure. It’s good to drive in other ways, too; the steering, while as slow as you’d expect, is at least light and direct, and the Grand Cali changes direction remarkably easily for such a big bus, with surprisingly little body lean and decent front-end bite.

Meanwhile, the gutsy, 175bhp 2.0-litre turbo means it never feels breathless, and once you get over the sheer size of the thing, the Grand Cali is actually pretty easy to drive thanks to a smooth and responsive eight-speed automatic box, a tight turning circle and a load of driver aids you’d normally find in your car.

That’s all very nice to know, but I meant is it comfortable to camp in?

Oh, sorry. But yes to that question too. Forget the overwrought textiles and faux wood you’ll find in most camper conversions; inside the Grand Cali is clean, bright and sleek. There are white, wipe-clean units as far as the eye can see, contrasting dark wood flooring and restrained fabrics throughout. And at night, you can turn on the standard ambient lighting for a bit of a boutique hotel vibe.

Space-wise you won’t be wanting; even six-footers will be able to stand up in the 600 without issue, and there are lockers seemingly without end, as well as a big 800-litre ‘garage’ beneath the double bed. That’s where you’ll find the gas bottles, too.

On the wall you’ll find a rather natty touchscreen that controls most of the van’s major functions, while every window and the big sliding door all have flyscreens and pull-up blinds. There are touch-sensitive, dimmable reading lights everywhere, and the recessed strip lighting around the ceiling can be dimmed too.

You also get a two-burner hob, a fridge-freezer, a folding dining table, a bench seat with Isofix mounts, and two big, comfy, swivelling armchairs up front. There’s a slew of options, too, including air conditioning that works when the engine’s off, a satellite dish, an integrated Bluetooth sound system, solar panels…

Yes, so in theory, you don’t actually have to plug in when you get to the campsite. They feed the leisure batteries and ensure you’ve got power wherever you go. There are USB sockets dotted everywhere around the van, too, so you’ve always got somewhere to plug in your phone/tablet/USB-powered roll-up piano (it really is a thing – Google it), and so on and so forth. And of course, you get standard three-pin sockets, too.

But is that shower really big enough to use?

Yes, actually. OK, it’s more cramped than your shower at home, but there’s enough space to turn around and you don’t find yourself banging your elbows on the sides of the cubicle when you’re washing. You can hook the shower head up near the roof and get a fairly good flow of water going, too, so showering in the Grand Cali is actually quite a pleasant experience.

You should sleep well, too. The main bed is about the size of a normal double, and while the 80mm thick mattress does feel a little skimpy, there’s a neat spring system beneath it to try to make up for that. The result is that it feels rather firm, but we still managed to get a good night’s sleep. And when you wake up next to a lake to the sound of bird song, you’ll forgive rather a lot.

I like the sound of that. Should I get one?

Yes – if you can afford it. Prices haven’t been confirmed yet but Volkswagen says the Grand California will set you back around £69,000. Yes, ‘ouch’ is what we said, too.

But if you take a look around at aftermarket Crafter conversions, they don’t cost that much less – and many don’t feel quite as tasteful or as sweetly integrated, either. Because the Grand California’s been built by Volkswagen itself, quality is high and the extra features you get make it feel a cut above your usual camper. In short, this is one of the finest campers money can buy, so if you’re a camping enthusiast, the Grand California should probably be on your lottery win list.