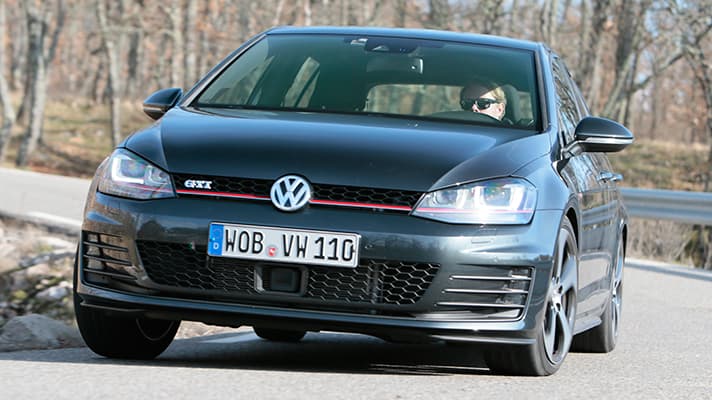 So, how far will VW roll the dice this time? From trail-blazing featherweight 1970s original to bloated 1990s chubster, the GTI is the everyman prize-fighter that went to seed before getting on the comeback trail. The 2004 Mark 5 version, in particular, remains a Top Gear favourite, the one car above all others that truly merits that ancient car journalist and almost Confucian saying, ‘the only car you’ll ever need.’ Well, it is. Or was.

So here’s the party line: ‘New Golf GTI: faster, more efficient and cheaper to insure’. Hmm. We live in difficult times, but even so, this is unpromising. A 47.1mpg combined average and 139 CO2s is not the stuff of fizzy nether regions, which is surely what the GTI is meant to deliver. On the other hand, spend £980 on top of the £25,845 the ‘base’ model costs and you’ll get the Performance pack, which wrings roughly 10 more bhp from the GTI’s 2.0-litre turbo four (to 229), adds bigger brakes, and most importantly introduces a clever new limited slip diff. The nether regions are, er, stirring.

Click here for more pictures of the new Golf GTI

We’re at a private racing circuit in the south of France for an exclusive assessment; so serious is VW about its saucy new diff that there are more engineers on hand to explain it than there are journalists to listen. ‘The Golf GTI is a car that everyone, regardless of their ability, should be able to drive to maybe 90 per cent of its maximum within a few minutes,’ Karsten Schebsdat, manager of passenger car chassis tuning, tells me. Lots of wavy lines and pointing to schwimmwinkel – slip angles – certainly suggests that this is a car that can handle a whole load of abuse. ‘We did a slalom test in the GTI at 140mph, and as you can see there are no sharp curves on the graph,’ Karsten adds. Slalom at 140mph? Rather him than me.

The diff in question is an electro-hydraulic set-up that locks up 100 per cent, and uses a multi-plate coupling – 50 per cent of the Haldex system VW has used for years – on the diff box and right driveshaft. The aim is simple: reduced steering angle, more precise handling, increased cornering velocity, sling-shot exit speeds.

Here we go, then. There’s a long, fast straight, wisely interrupted by a coned chicane, into a longish right-hander. You only have to look at it to know that this is understeer central, the sort of corner that murders tyres, lasts longer than a series of 24, and reduces whoever’s behind the wheel to tears of frustration. The approach to the corner is a good indicator of the GTI’s overall character: it’s super smooth, completely calm, and plenty fast enough without giving you any sort of nudge in the nuts. Slice through the cones at 90mph and the steering needs just a quick flick of the wrist. Not too hard on the brakes, and the exhaust emits an unexpectedly guttural rasp as you work your way down through the gearbox, then turn in. Accurate, linear and a little bit – whisper it – boring…

But mid-way through the corner you can simply stand on the throttle, then watch all eight seasons of 24 while some torque-shuffling front axle magic hauls you round. It’s very effective, but you need to give it full beans for it to work properly. The GTI has never been a car whose back end was particularly mobile, but more than ever the schwimmwinkelen are hard to detect. Drive it like a moron and still the Golf hangs on. Personally, I like a bit of back-end mobility, but it’s clearly no longer the done thing. By working so seamlessly, the GTI’s chassis architecture promotes an unarguably efficient but ultimately rather aloof driving style. On the other hand, the GTI with the trick diff is eight seconds faster round the Nordschleife than a GTI without it. The computers might have won, but they’re not as much fun to hang out with.

All GTIs come with Driver Profile Selection (DPS) which allows you to tweak steering ‘feel’, throttle and DSG shift times (if you have it), but you’ll need to stump up another £795 for the Adaptive Chassis Control to gain control of the suspension and damping. On choppy rural French black-top, I opted for Sport in everything bar the suspension; normal mode is firm enough on the 18in wheels, and I strongly suspect that will be the case in the UK (bigger 19in wheels are an option, but I wouldn’t bother). The GTI in Performance trim does 0-62mph in 6.4 seconds and is all done at 155mph, which is quick enough for most sane beings and even some insane ones. It covers ground more unobtrusively than a Focus ST, Megane Sport, Astra VXR or fantastically good BMW 135i, and checks its movements over crests and during unexpected direction changes with real ease. The brakes are good, too. But is the GTI now too refined for its own good? Maybe. It flatters the normal driver, which is obviously the point, but it doesn’t have enough fire in its belly.

Click here for more pictures of the new Golf GTI

Then again, it’s still a Volkswagen Golf GTI. Try as they might, no one else can craft a car quite like VW. The subtle red grille strip that arrived with the Mark 5 is now all over the shop: in the bi-xenon headlights, the brake callipers, and the tasty little GTI wing badge. As ever, the GTI is a solid looking article, more chiselled in this latest form, but still with the big wheels and C-pillars and enviable shut lines. There’s red in the doorsills, on the Alcantara seat facings, in the door rests, and of course in the long-running Tartan ‘Jacara’ seat trim. There’s a chunky three-spoke, flat-bottomed wheel, a golf ball gear knob on a curious supporting structure, black roof-lining, and red ambient lighting. It’s best-in-class stuff, as is the touch screen multi-media, which includes DAB as standard, and whose sat nav controls spookily appear as your hand nears the screen.

The system itself is also excellent, though an option. Others include bigger 19in ‘Santiago’ alloys (the standard wheels are called ‘Austin’ for no good reason), leather upholstery, the adaptive chassis, Park Assist (ridiculous, but it works, although if you can’t bloody park properly you’re either a) irredeemably lazy or b) not likely to be buying a Golf GTI), and a Dynaudio sound system with a 10-channel amp and eight speakers. Prices start at £25,845 for the 219bhp three-door, rising to £28,895 for the 229bhp five-door with the DSG (worryingly close to the BMW 135i’s £29,950). Naturally, the GTI has state-of-the-art active and passive safety systems, and is more rationally irresistible than ever.

But. It feels a bit uptight. The dice haven’t rolled as far as they should have. It’s a fine car, and you will never regret choosing one. The new GTI, then. The hot hatch equivalent of a good accountant.