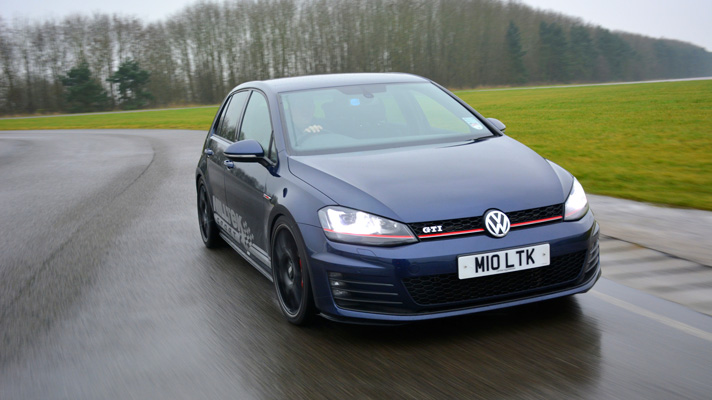 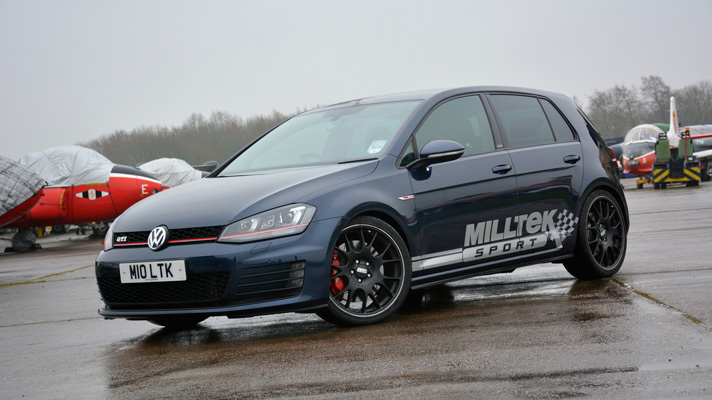 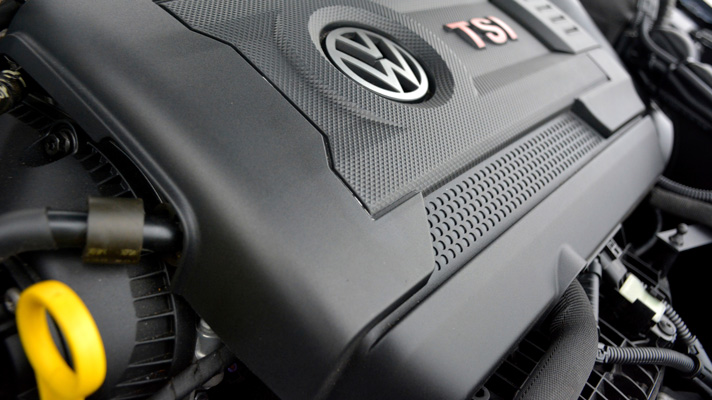 Oh great, someone's been tampering with a Golf GTI.
Yes, the Golf GTI is such a respected all-rounder now that tampering with it seems almost indecent. It's as if Laura Ashley had started selling bondage gear. However, since VW itself isn't above adding extra power to the platform (see our recent drive of the new Golf R) maybe we should cut Milltek some slack. After all, the gains they've got from the 4cyl 2.0-litre turbo are, well, remarkable.

And what are they?
You might recall that if you buy a standard Golf GTI it comes with 217bhp. If you opt for the £995 Performance Pack that rises a dizzying 10bhp to 227bhp. Milltek has done better. Quite a lot better. This is 312bhp of better.

Jeepers, that really is quite a gain. What's been done?
Well, first and foremost Milltek is an exhaust company, so this car has a new bigger 3-inch bore exhaust which reduces back pressure and lets the gases escape more easily. There's also a bigger air filter, so air can get into the engine more easily, too. And finally they've let a company called Shark have a play with the ECU for them. These are all fairly standard performance upgrades, but it's not often you see such significant gains, which speaks volumes for how unstressed VW's standard engines are.

Phew. Has anything been done to the suspension to help it cope?
You probably spotted that it rides a bit lower than a standard GTI, so yes something has been done - it features Eibach springs and anti-roll bars. However, there are no changes to the electronic management of the traction control, nor a limited slip differential to help deal with the torque.

So does it torque steer outrageously?
Oddly, no. In fact the front end is amazingly well behaved - and for three key reasons. Firstly, it feels as if VW has got the suspension geometry absolutely nailed with this car. It tracks straight and true, feels benign and manageable. Secondly, the electronics have moved on a massive amount since VW first gave us a car with a pretend electronic differential, and lastly, the torque has been limited in first and second gears.

I take it this was necessary for gearbox preservation?
We have to assume so. But don't make the mistake of thinking it's slow through first and second, because it isn't - it's just that third and fourth gears move this car beyond the realms of almost anything else that could call itself a hot hatch. The trouble is that to enjoy all the fire in this Golf's belly, you need to use all the revs, and if you use all the revs in third... well let's just say you're doing over 70mph.

So it's fast then?
It genuinely is as quick as most of us would ever need a road car to be - really athletic and punchy, able to keep pace with a Boxster or unwary 911. And largely free from compromises. Largely. Because there were some small issues with our test car that need sorting, the biggest being the lower ride height that meant the tyres scrapped on the arches if you hit a speed bump or managed to load the suspension up enough through a corner. There was a bit of extra bounce through the suspension, too, but even with that and a slightly sleepier turbo, the changes haven't made this a faster-but-worse car. Instead it comes across as having a dash of attitude. It doesn't feel ill-mannered - despite the rubber-scraping noise.

What's the best thing about it?
The powertrain. The motor shows just how tuneable the VW Group's 2.0-litre turbo engine, and when you change down through the gears there's a ‘tsss from the turbo. The other highlight, weirdly, is the traction control, because you don't realize how hard it's working until you turn it off. At which point the turbo tries it's hardest to upset the front wheels, something that unless you're very progressive with the throttle, it's rather good at. Understeer, which had been well managed until now, quickly starts to dominate at wet roundabouts. Hardly surprising.

Best keep the traction on then?
Stick it in Sport mode and you'll be amazed how effective-yet-unobtrusive it is. It's the same in the GTI, of course, but here the front wheels have another 85bhp to deal with. It's a quick and composed thing and for those sad cases out there that, like me, care about such things, you can left-foot brake in this one and use the throttle at the same time. You normally can't in VW Group products - the car believes that using both pedals at once means you're having a crash, so cuts power to the accelerator. Those of us of a Tommi Makinen-persuasion find this endlessly frustrating.

Weirdo. Let's get back to something relevant, like money.
OK, so here you go. The ECU tuning costs £695 and is responsible for the biggest gains in power. The Milltek Sport exhaust is £1,924, the springs and anti-roll bars are £570 and those tasty BBS wheels are £1,920. All prices include VAT. However, if it were my cash, I'd retain as much of the Golf's stealthiness as possible and just get the ECU and exhaust upgrade.