Read why you can trust our independent reviews
Jason Barlow
Published: 29 May 2018
comments
Skip 15 photos in the image carousel and continue reading 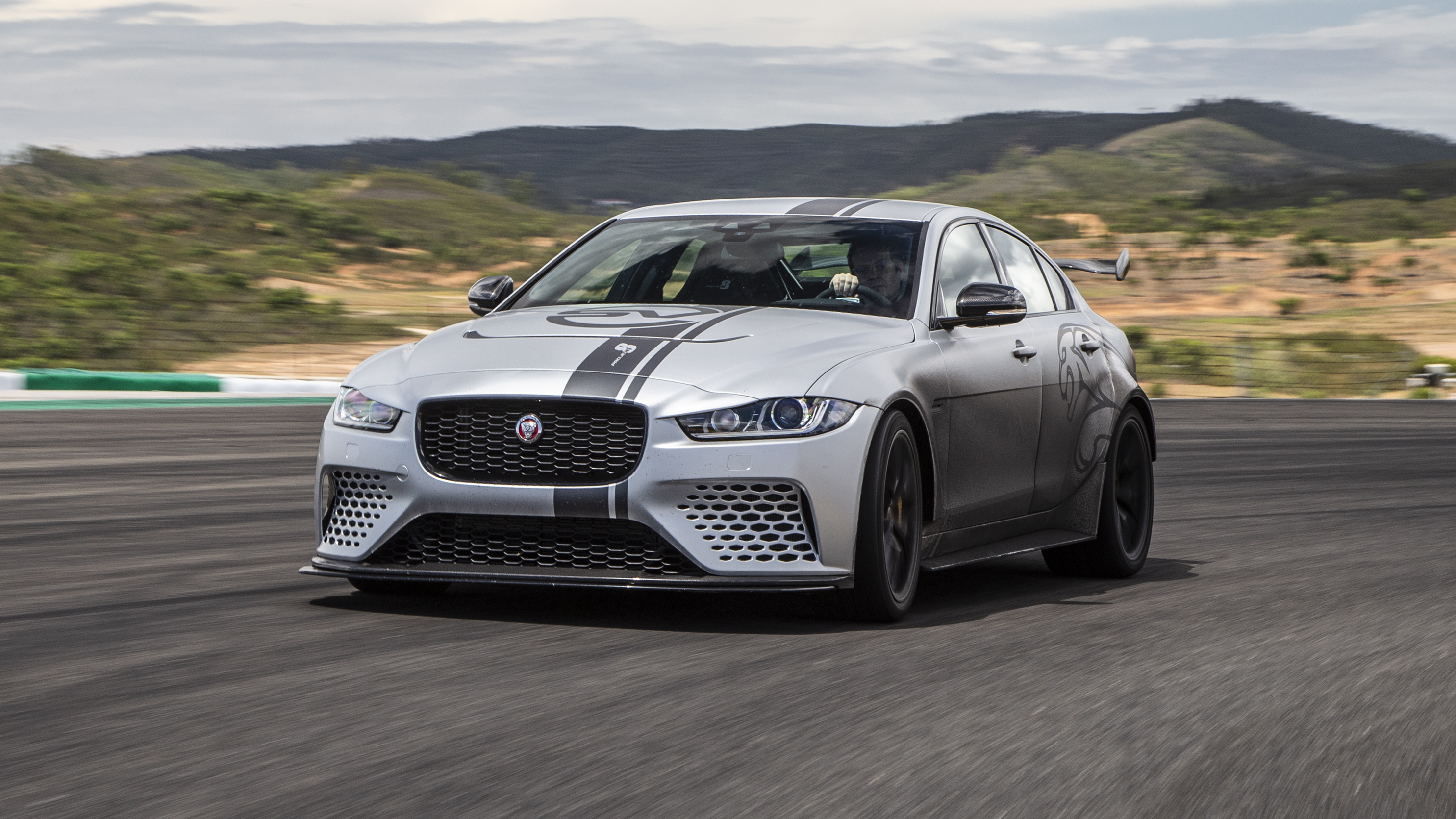 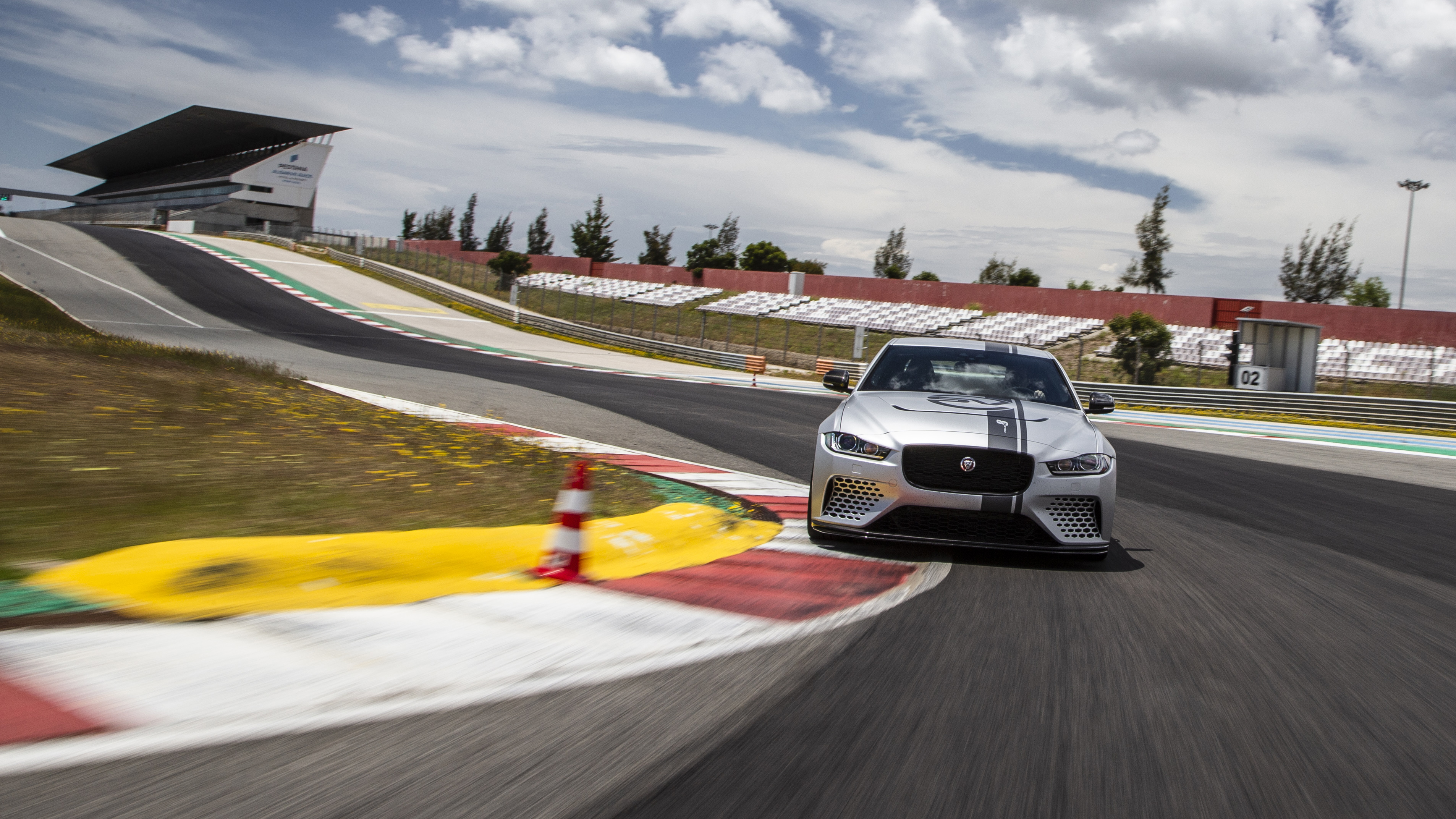 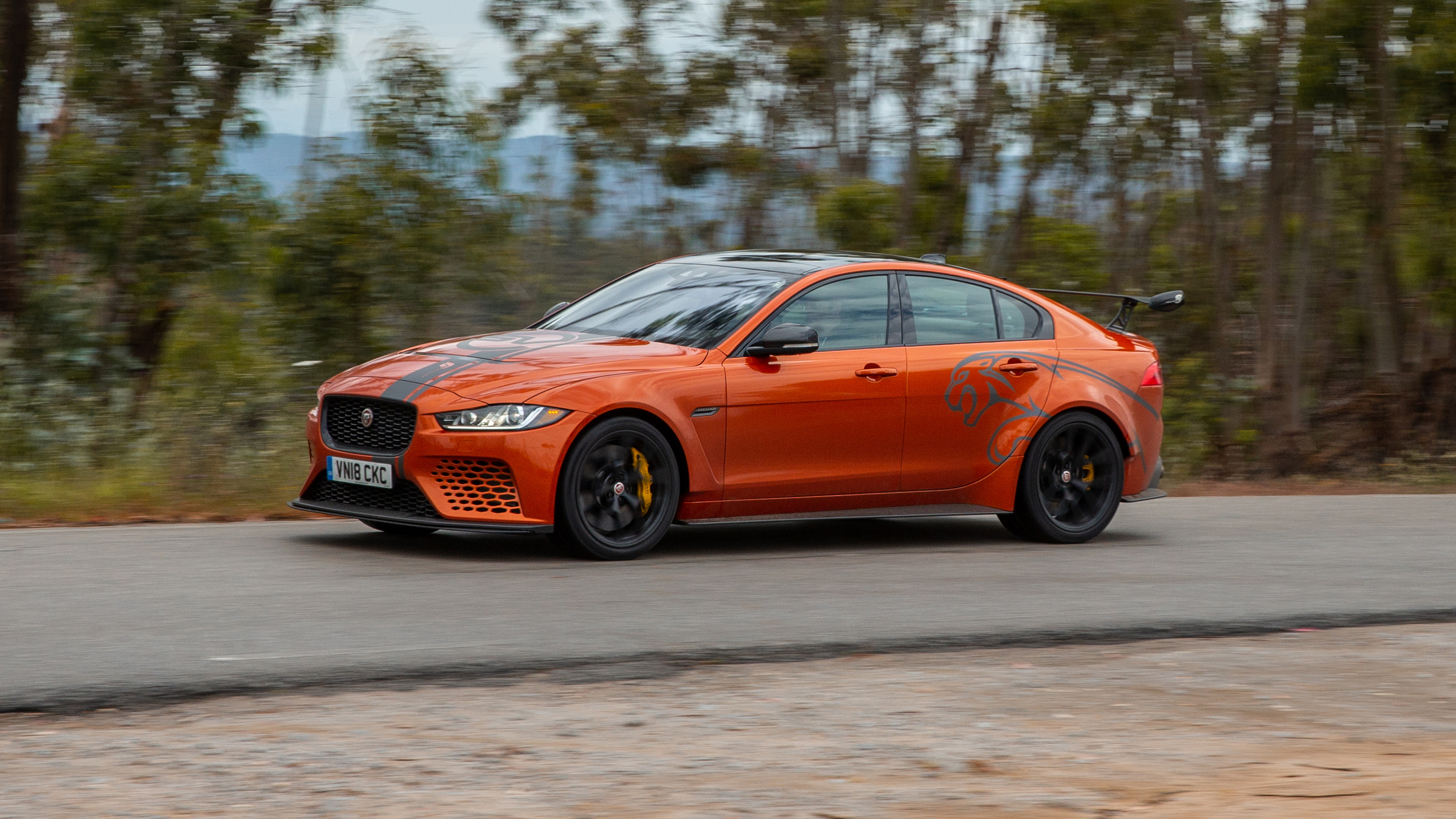 Here we are then, the answer to a question nobody was really asking...

Don’t be so cynical. Mind you, there’s a distinct irony in us driving the XE-based SV Project 8 while Jaguar is launching the I-Pace EV, just up the road from the Portimao circuit. On the other hand, you could argue that it demonstrates just how big the company’s bandwidth – and ambition – currently is. If you’ve got a problem with that, you’re in the wrong place.

Fair enough. Tell me more about the P8, then. Gussied up XE, right?

Wrong. Wrong with bells and whistles on, wrong turned up to 11. The Project 8 might look like a steroidal version of Jaguar’s entry-level saloon, but push chief project director Dave Pook a bit and he’ll admit it’s 80 per cent new. Having decided that the XE was a suitable candidate for the SVO treatment – aluminium structure, and let’s face it, the XE could use a bit of sun on its face – the team began work just 18 months ago. The mission was to create the ‘most capable track-focused Jaguar ever’, with the welcome by-product of galvanising the company’s youngest and hungriest engineers.

Of course. But first, there’s the way it goes. Scratch that: the way it feels. Pook and co are upfront about their ambitions, which was to benchmark and eclipse BMW’s M4 GTS, before taking aim at the Holy Grail itself, the Porsche 911 GT3. A wet Portimao track is no place to verify that, but by lunchtime the Algarve sun has done its thing and we can finally lean on the Michelin Pilot Sport Cup 2s with impunity (for semi-slicks, they’re pretty good on a slippery circuit). There are a couple of very punchy sections hereabouts, blind crests, dips and uphill bits that can only be fully savoured when the driver knows he or she is in a truly nailed-on car. To be blunt, very few road cars make the grade here, no matter what anyone says: the compromises are just too great. Which makes the P8 a revelation: if there are shades of DTM car about the aero ducts and slashes around its wheel-arches, never mind the vast front and rear diffuser and wing, it’s a feeling the car itself revels in and amplifies. The P8 is just mighty, fast as hell but surprisingly easy to manage, heroically stable under braking – 400mm Brembo carbon ceramics upfront with six-piston calipers, 396mm at the rear – with a front end that goes exactly where you want it to and a rear that tracks it faithfully. In fact, it’s so instantly, insanely good on the circuit that you can only assume it must be a dangerous liability on a normal road.

Funny you should say that. And?

The revelation continues in the real world. Jaguar thoughtfully provided a pace car for us, which undoubtedly helped in sighting corners and dodging cantering Seat Marbellas, but even so… wow. Sheer velocity is one thing, but speed is no use if you’re battling to maintain control. And control is exactly what the P8 has reams of, in terms of how it manages its mass (not inconsiderable, at 1,745kg), swats away rubbishy road surfaces, and erases speed so confidently your corner entry always feels bang-on. Even the XE’s remapped electric power steering is now authentic; the turn-in is so good this is one of those rare cars that you ‘think’ down the road. Given that there’s a hefty V8 up front, it’s clear that the SVO guys have worked their nethers off. (In fact, says Pook, the engine mounts were uprated fairly late on, such was the commitment to doing the right thing and annoying the bean counters. Amen to that.)

So what exactly have they done?

Loads. The P8’s suspension is a weapons-grade upgrade of the XE’s double wishbone and integral link set-up. The front uprights are new, there are twin-coil Eibach race-spec springs, Bilstein dampers, new bushes (ball joints rather than rubber in the rear), and anti-roll bars. A new suspension knuckle features ceramic bearings, which cuts unsprung mass as well as reducing friction and improving steering feel. The front sub-frames are solidly mounted, and P8 also runs two degrees of negative camber on the front tyres. As far as the body is concerned, only the roof and door skins are carried over. It’s 24mm wider at the front, 73mm wider at the rear, with notably tumescent wheel-arches. The headlights had to be moved forwards. The adjustable front splitter, front and rear bumper, and bonnet are made of carbon fibre, and the aero cut-outs around the arches tidy up the turbulent airflow in that area, further reducing pressure and lift.

SVO claims a reduction in front-end lift of 206 per cent, and a total of 122kg of downforce at 186mph. Airflow under the car has also been improved, which necessitated raising the boot-floor. There’s an electronic differential, tended to by its own oil cooler (a first on the XE), torque vectoring, and a titanium Inconel exhaust. It’s also loud, so loud that it scrapes through homologation with only the audible equivalent of a Rizla paper in it. This brings imprecations from our pace man to watch the volume as we drive through Portuguese villages. (We’re not on the Nordschleife now, where the P8 recently set a lap record for a road-legal four-door saloon of 7min 21 seconds.)

Well now. Yes, the rear wing is hardly the stuff of shrinking violets. And if you go for the Track Pack (27 per cent more rigid, thanks to its roll cage), you have to get busy with the spanner, because the suspension settings are manually adjustable, while any notion of tapping into the P8’s four-seater USP will go out the window (hotly in pursuit of the seats themselves, the remaining two being lightweight carbon jobs). But left in Dynamic mode – the middle drive setting, flanked by Normal and Track – the P8 blends its steering, dampers, throttle, 4WD responses (maximum of 30 per cent to the front axle), stability systems and torque vectoring in such a way that the 911 GT3 comparisons are absolutely valid. Given the unprepossessing starting point and the chunky weight (blame the powertrain), this is little short of a miracle. And it’s perfectly civilised on the road, too. Maybe the cabin could have used a bit more vivification, but it’s still a very serious place to be. And you get a pistol-grip lever in place of the trad Jag rotary controller, to go with the obligatory Alcantara.

It’s left-hand drive only (something to do with the front suspension apparently). Such is the step forward elsewhere in the P8’s engineering that the usually excellent ZF eight-speed auto ’box has its work cut out keeping pace with the rest of the car (notwithstanding it can shift from eighth to second gear non-sequentially). It also costs £149,995, which even for a 300-run limited series vehicle is a chunk of change. But like AMG’s Black Series cars and the further reaches of Porsche, the P8 is such an intensely focused, meticulously wrought piece of engineering it almost comes from some higher place altogether. It feels personal. Special. And in that regard, it’s unquestionably a future classic of the sort JLR’s SVO is aiming to deliver. Nice one, lads.