ADVERTISEMENT FEATURE by Audi
What is an advertisement feature?
Skip 6 photos in the image carousel and continue reading 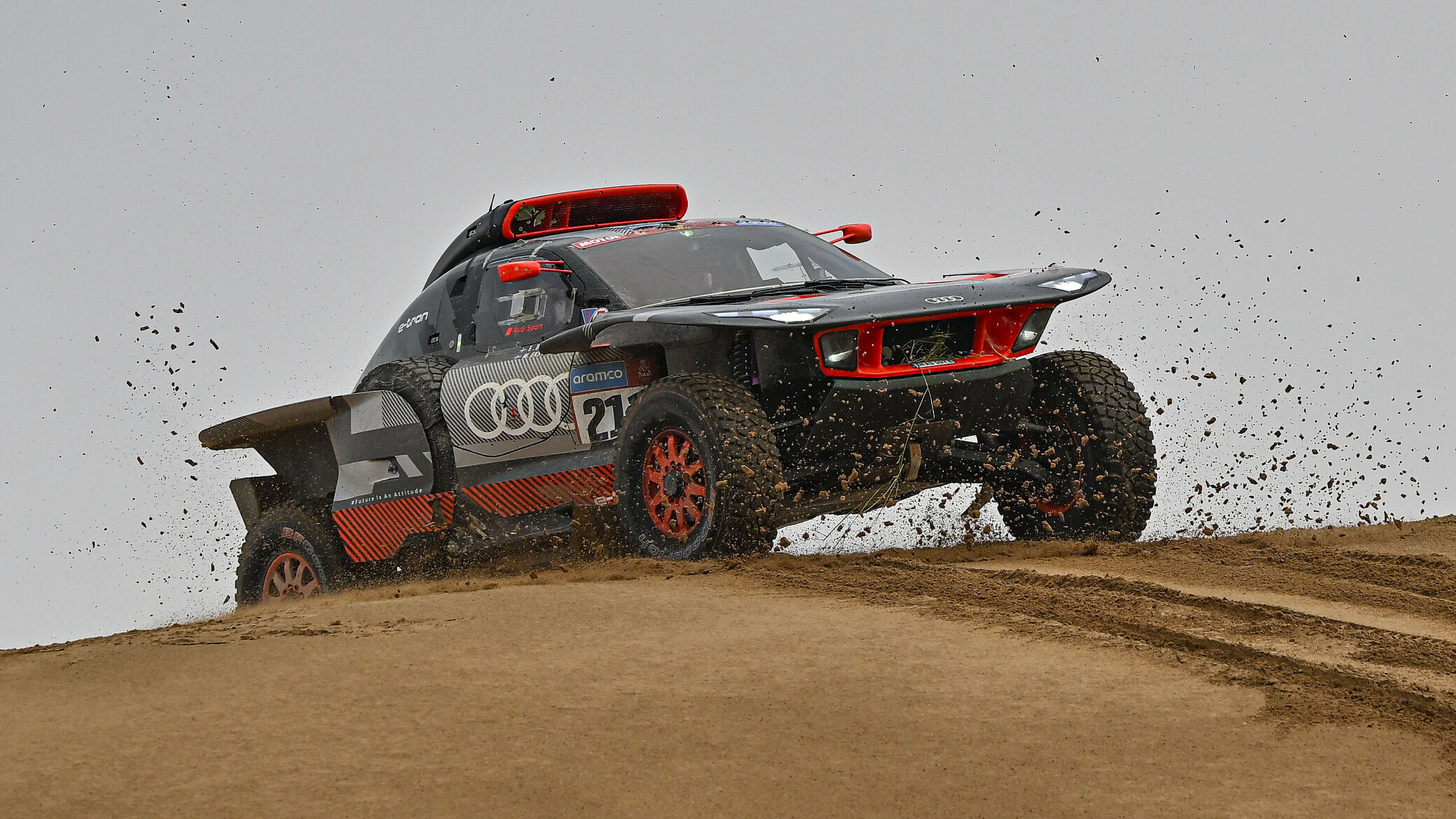 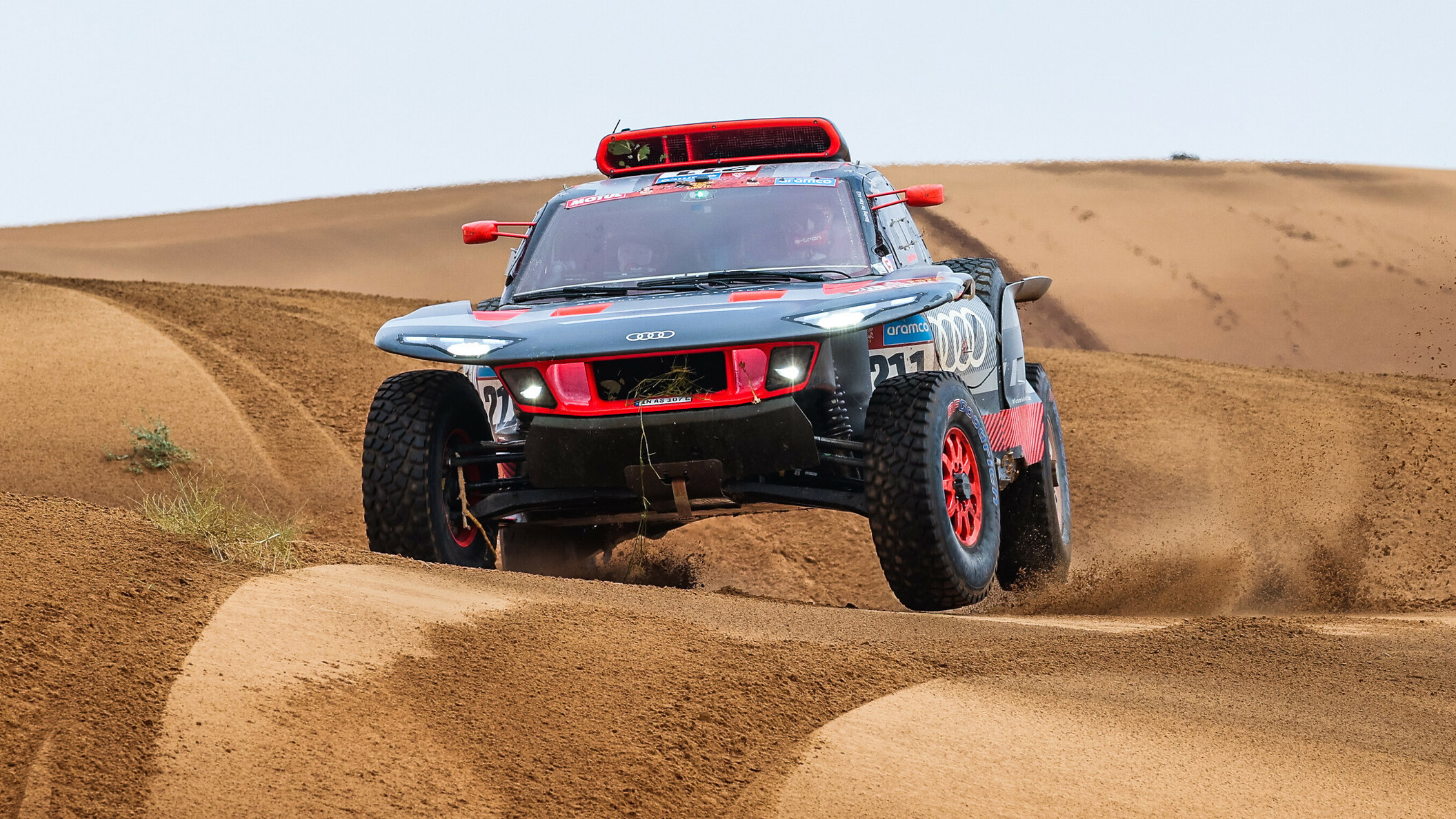 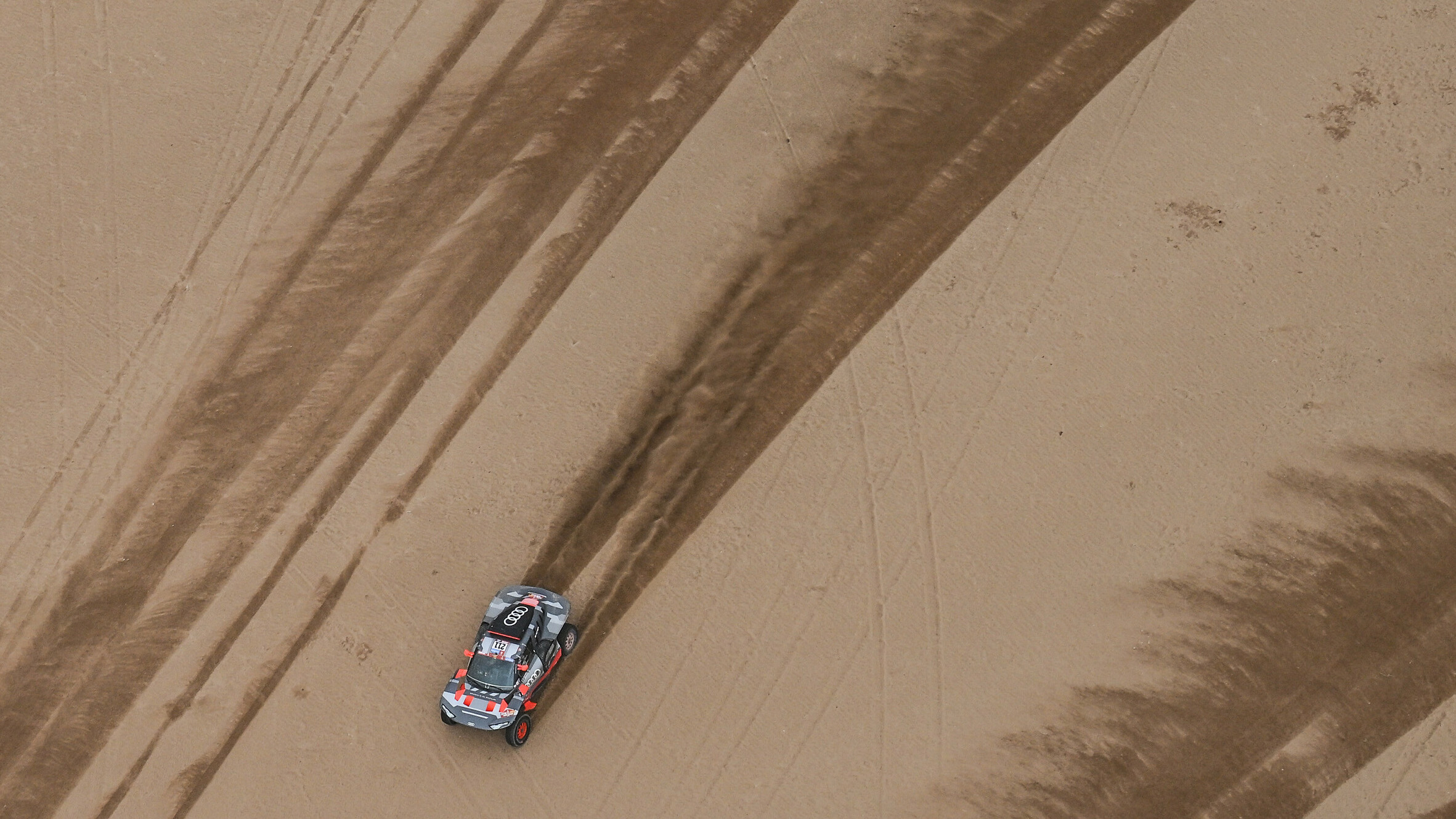 When it comes to the Dakar Rally, teamwork might be regarded as a driver and navigator working in perfect harmony to convert a stream of road book notes into expertly traversing tricky sand dunes and threading through mountain passes. However, for the Audi camp on day eight of the 2023 edition of the off-road adventure, teamwork meant the entire Ingolstadt stable coming together to help stricken colleagues get over the line.

It was left to two of Audi’s electrified RS Q e-trons to contest Stage 7 on Saturday. This came after 14-time event winner Stéphane Peterhansel was forced to withdraw the previous day following injuries sustained by co-driver Edouard Boulanger.

For the first part of the 333km charge from the Saudi Arabian capital of Riyadh to Al Duwadimi, Mattias Ekström took control. Under heavy, overcast skies, he and co-driver Emil Bergkvist thrived as they snaked their way between the canyons and valleys in first place after 196km. Even more impressively, this came despite the motorbike class having their day cancelled due to bad weather and overall exhaustion. That left the car class to pick their own route through the scenery without the help of any two-wheeled tracks to follow.

“We enjoyed the nature of the stage a lot,” explained Ekström. “The road was really nice. That’s the part of this rally which I really love. I feel like I can use my experience. Then we came to the regrouping, and we were only 20 seconds behind the car in front. I know we had a good flow.”

In the second part of the run, though, caught in some dust from the car in front, Ekström tagged a hidden rock in the sand to heavily damage the car's wheel, tyre and left-rear suspension. The sole RS Q e-tron runner in contention for an overall podium had to wait for the arrival of World Rally legend Sainz for help. The Spaniard parked up and, along with his co-driver and whizz mechanic Lucas Cruz, began donating parts to their team mates.

Ekström continued: “Just after the regrouping zone, after less than 30 seconds of driving, there was a lot of dust. I stayed in the dust and then I hit a stone on the straight. I couldn’t see it. We did manage to disassemble our car and Carlos’s car and started to just mount the new parts. Then the mechanics came. Overall, I think we needed nearly three hours. It’s a big job.”

All told, to end the half-marathon stage that has the drivers forsaking motorhomes to spend a night camping, Ekström wound up with a stage time of nearly six and a half hours. He now occupies 21st overall.

With Sainz – who also encountered a technical glitch – breaking out the spanners to help his team mate, the rough-stuff maestro and three-time Dakar champ had to then wait for the arrival of the Audi race truck to fix his RS Q e-tron before finishing the stage.

“Today started well,” said Sainz. “Then the car stopped after a jump and we had to do a reset. We carried on but then we found Mattias repairing the car. So, we stopped and gave him our rear-left corner and tried to help him continue. But he lost a lot of time.”

While the turbulent events of Saturday mark the first time since the start of the 2023 Dakar that no Audi has featured inside the top 10, respite is on the horizon for the tireless crew. Following a 345km return to Riyadh tomorrow, Monday brings a welcome rest day before the second half of the rally.