From the archives: the bonkers Honda NSX-GT at Zolder | Top Gear
Advertisement
Retro

From the archives: the bonkers Honda NSX-GT at Zolder

The original NSX’s final bow was this wild-looking racer. And back in 2005 we got to drive it…

Hurtling past a pit wall at 170mph with sweat trickling into the corners of my eyes, my surroundings morph into a Matrix-style freeze frame. I’m left alone with the thudding sound of arteries coursing oxygen-rich blood through my entire system and the solid voice of reason echoing in my brain.

Thoughts of doubt briefly intrude. Should I not be here? Should I never have signed the disclaimer forms? Should I have practised even harder on Gran Turismo 4, before exposing myself to the intensely hot, sonically violent reality of one of the cult game’s fastest cars? 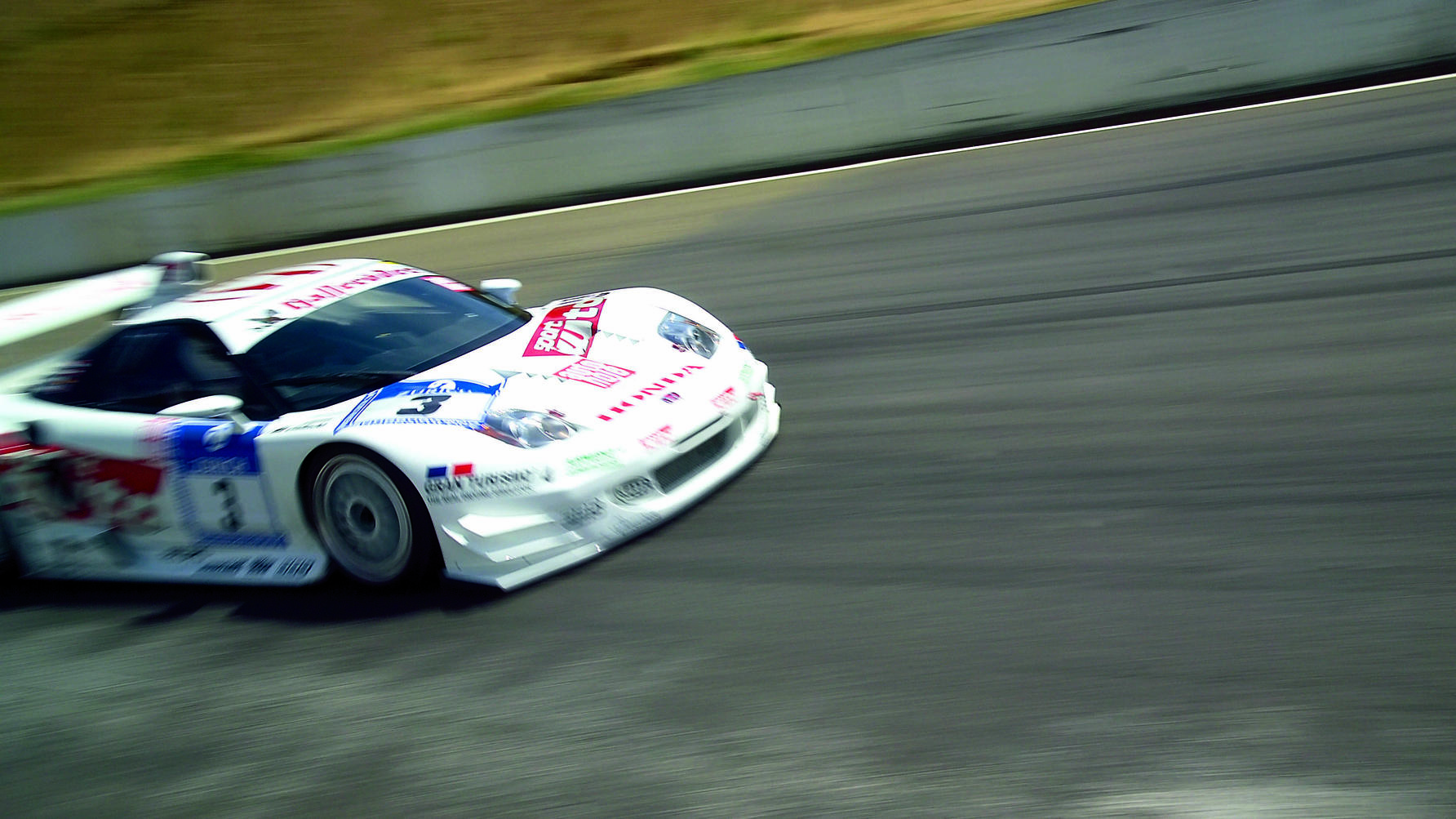 This is an entirely alien environment, a carbon-fibre lined coffin travelling quicker than I could ever hope to become familiar with. Randomly scattered instrument clusters cram my view, providing unfathomable read-outs, and the five-point harness is pulled so tightly that it’s almost certain I’ve lost the ability to pass my genes on to a future generation. A long, carbon-tipped lever attached to a sequential gearbox nudges at 45 degrees right next to my left shoulder and a flat-topped, Sparco, racing steering wheel rests close up against my chest.

These are my first experiences with the Honda NSX-GT, the racer that sired the recent NSX-GT R road car, a £250,000 homologation special with exaggerated carbon-fibre spoilers and a bizarre snorkel sprouting from its roof. Here that growth has a functional purpose, providing a ram air effect to boost power at speed as it feeds six intake trumpets on top of the centrally-mounted, rev-hungry, V6 engine.

The racer is way more extreme than the NSX-GT R. Only the snorkel, the aluminium monocoque chassis and the door handles could realistically be directly bolted over to the road car. Truth be told, to build and develop something remotely similar, you’d be looking at an investment in excess of £1million.

My concentration returns. Fate fast forwards and hits me in the face as a sharp left-hand turn looms at the end of the Zolder circuit’s start-finish straight. This is the track that once played host to the Belgian GP, ultimately claiming Gilles Villeneuve’s life in 1982. Presently it’s the venue for an oddly eclectic motorsports test day, featuring touring cars, open prototypes, single seaters, Porsches, humble Minis and me. 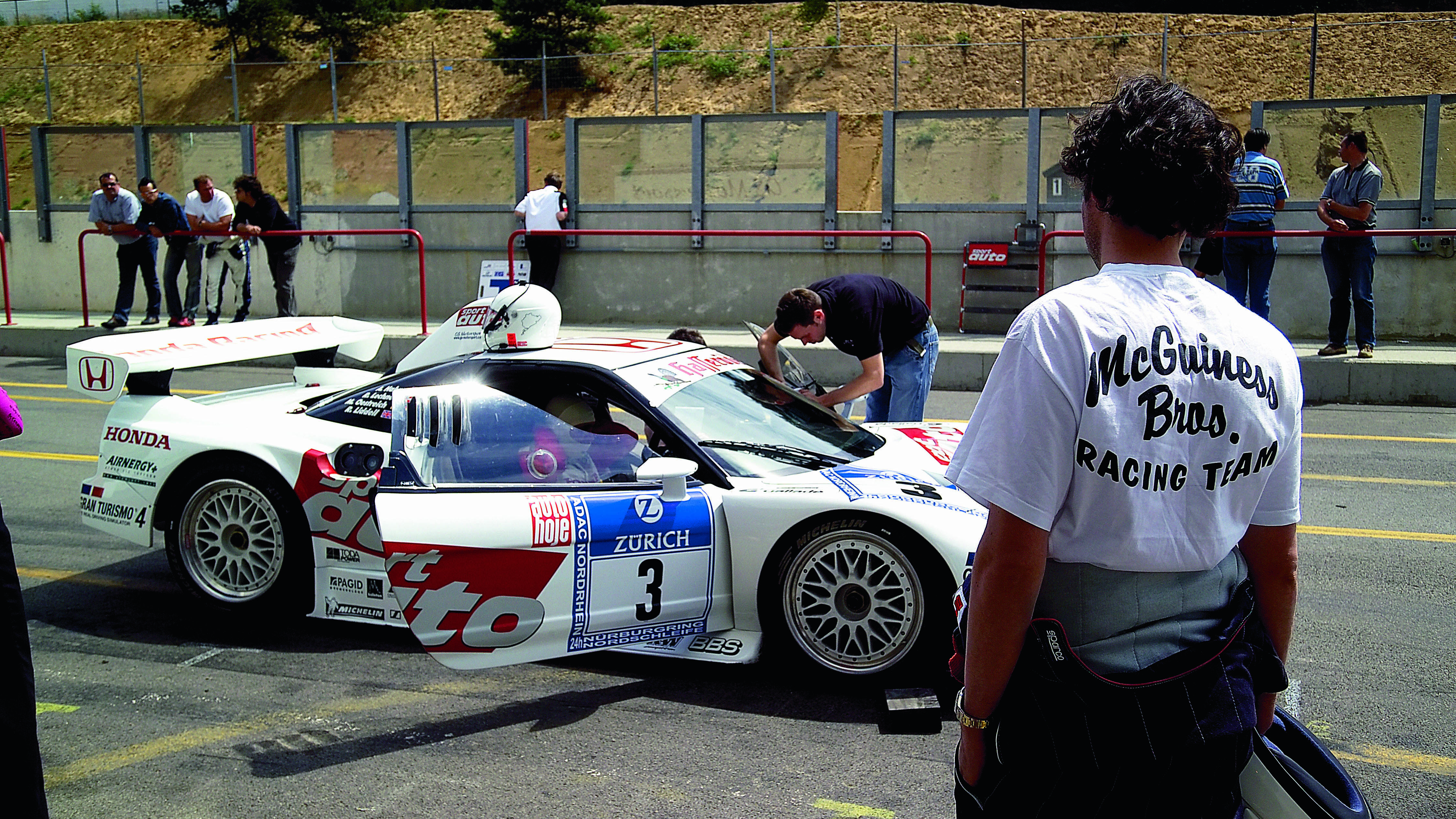 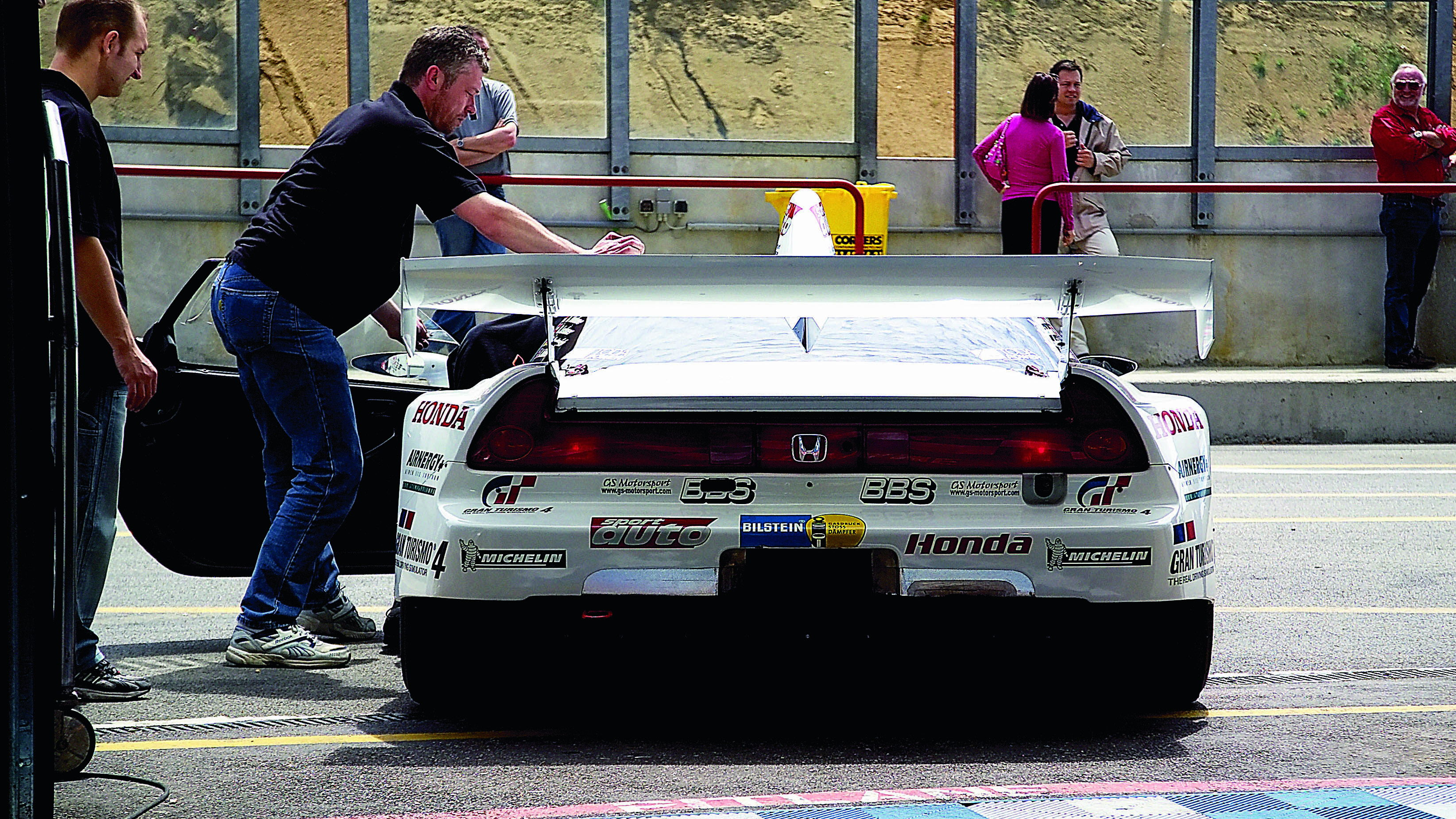 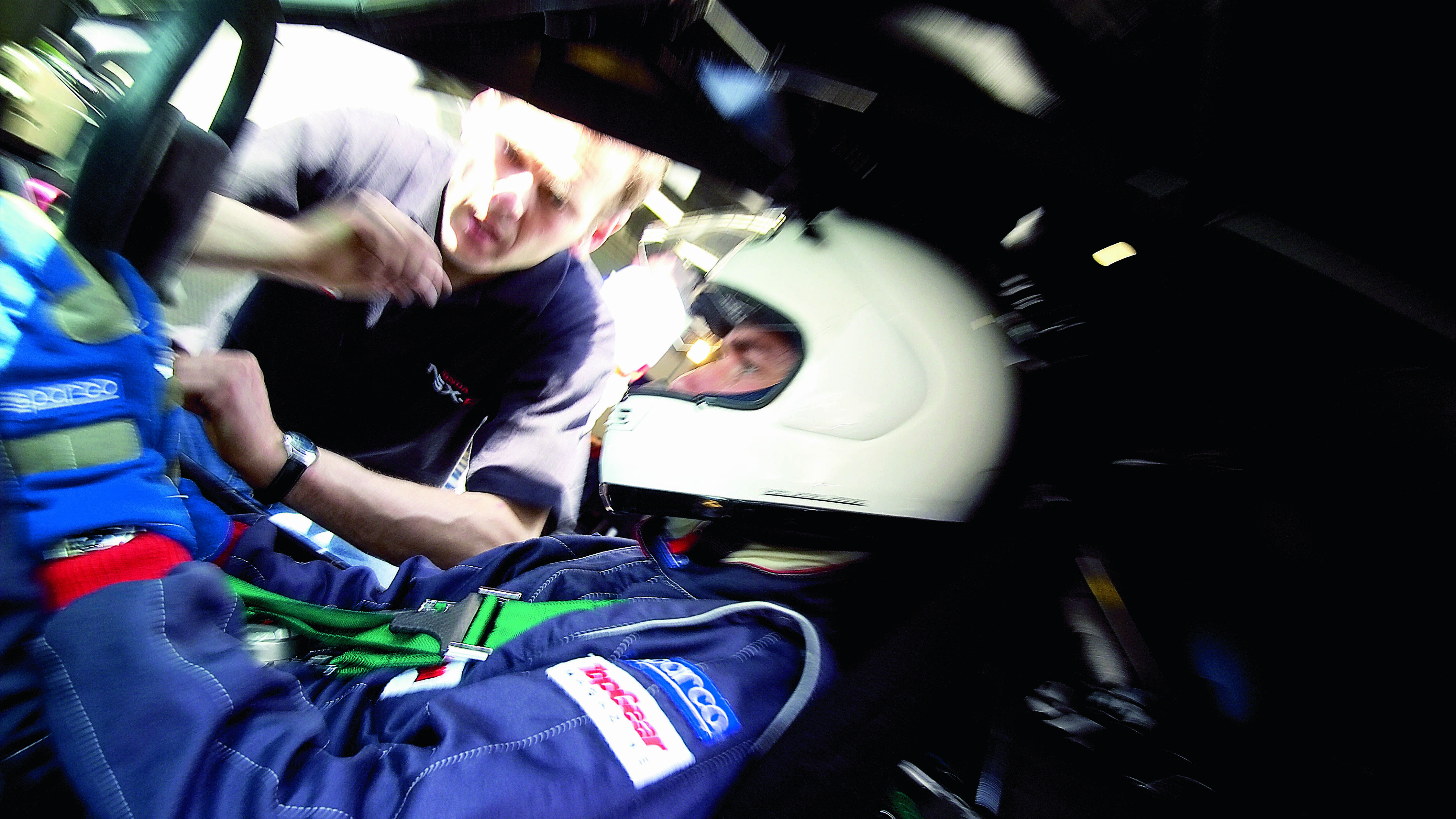 I push the near-solid brake pedal and nothing happens. I stab it harder but still nothing. Panicking now, pure reflexes alone force me to hit it so severely that my foot risks dislocating from my ankle. The car just makes it round, slithering uncertainly on its vast, still-cold Michelin slicks.

This is asking way too much. Thrown in with professional racing drivers, attempting to learn the lines around a circuit boasting a reputation that’s best not to ponder on, all the while trying to deal with a race car that only promises to come alive once it’s been driven so brutally that its brakes and tyres are close to catching fire.

In the pixelated virtual head-rush that is GT4, there’s another factor that you don’t even have to think about contending with. That’s the (British-built) Hewland six-speed sequential gearbox, one of the few non-Japanese components on this car. To be able to engage it cleanly, I’ve been told to keep the revs between 4,000 and 7,800rpm; difficult when the flywheel is so light that an inch of accelerator travel makes all the difference between bogging down and smashing into the rev limiter. The idea is then just to flick the lever rearwards to move up through the ratios – no need to use the clutch. Best to use it on the way back down, though. And remember, never go for first. Push too hard forwards from second and you’ll end up in neutral, push it even harder and you’ll be in reverse. 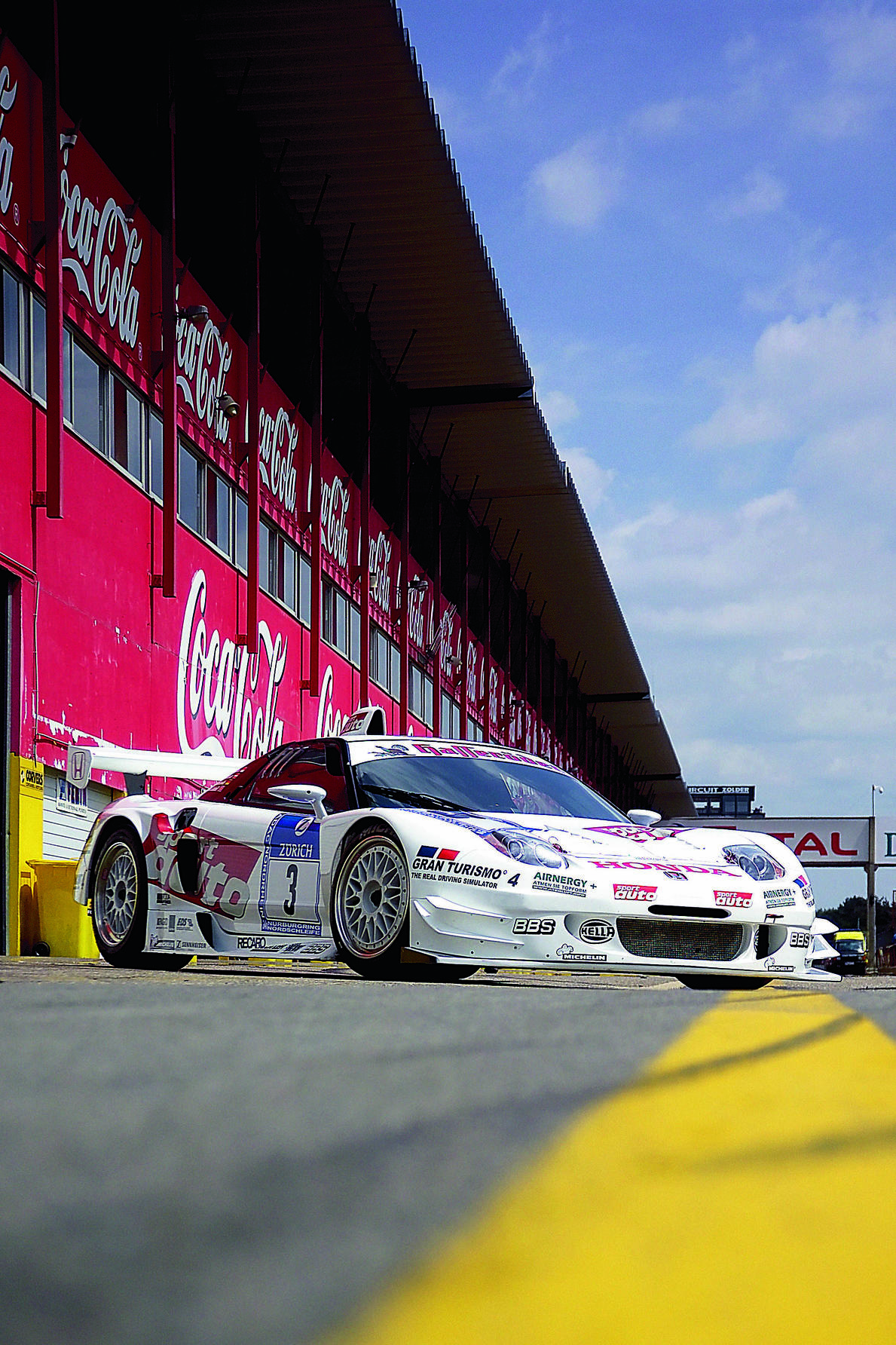 This car was originally built to compete in the big-budget Japanese GT Championship, later being adapted to take part in the lunatic Nürburgring 24-hour race. Predictably enough, the gearbox proved to be the weakest link in last year’s race, grenading itself only eight hours in.

Blind determination supplants fear as a winged BMW 1 Series racer steadily closes from behind. In a car as visually psychotic as the NSX-GT, there’s no way I can allow myself to be overtaken by a hatchback. After a couple of sharp stops the brakes kick into life, the tyres following them. At this point, I find myself swiftly having to disregard any knowledge I may have of how fast a road car can take a corner on a track – even one that’s as fluid and communicative as a regular Honda NSX. I hurl the car at a chicane and it just bites and makes it round. I realise I’m smirking every bit as hard as my wrists are now aching.

I brace myself tighter in the skimpy seat, surrounded at either side by Kevlar side-impact crash pods as my protective headgear rattles up against the reassuringly bulky roof struts of the rollcage. This is getting truly silly. The NSX-GT’s levels of mechanical grip are higher than in any car I’ve ever driven before, providing even more staggering sensations than its straight-line acceleration. To put the latter into context, this car can shrug 0-62mph off quicker than you could read out your phone number; with a 3.2 second time, it’s faster than an Enzo.

The most vivid and unusual sensation awaits in the Kanaalbocht – as the name suggests, a corner alarmingly close to a canal. This is an open, fast, flowing turn, one that I convince myself I’ve got a chance of taking flat out. The NSX-GT’s flat undertray, assortment of front winglets and massive rear spoiler combine to give true downforce above 100mph; even the wing mirrors are shaped to channel air over the bodywork. I turn in, clench my organs and feel the car suck down and track tightly round. This isn’t just hyperbole – entering half as quickly in a regular NSX, I’d have found myself submerged. 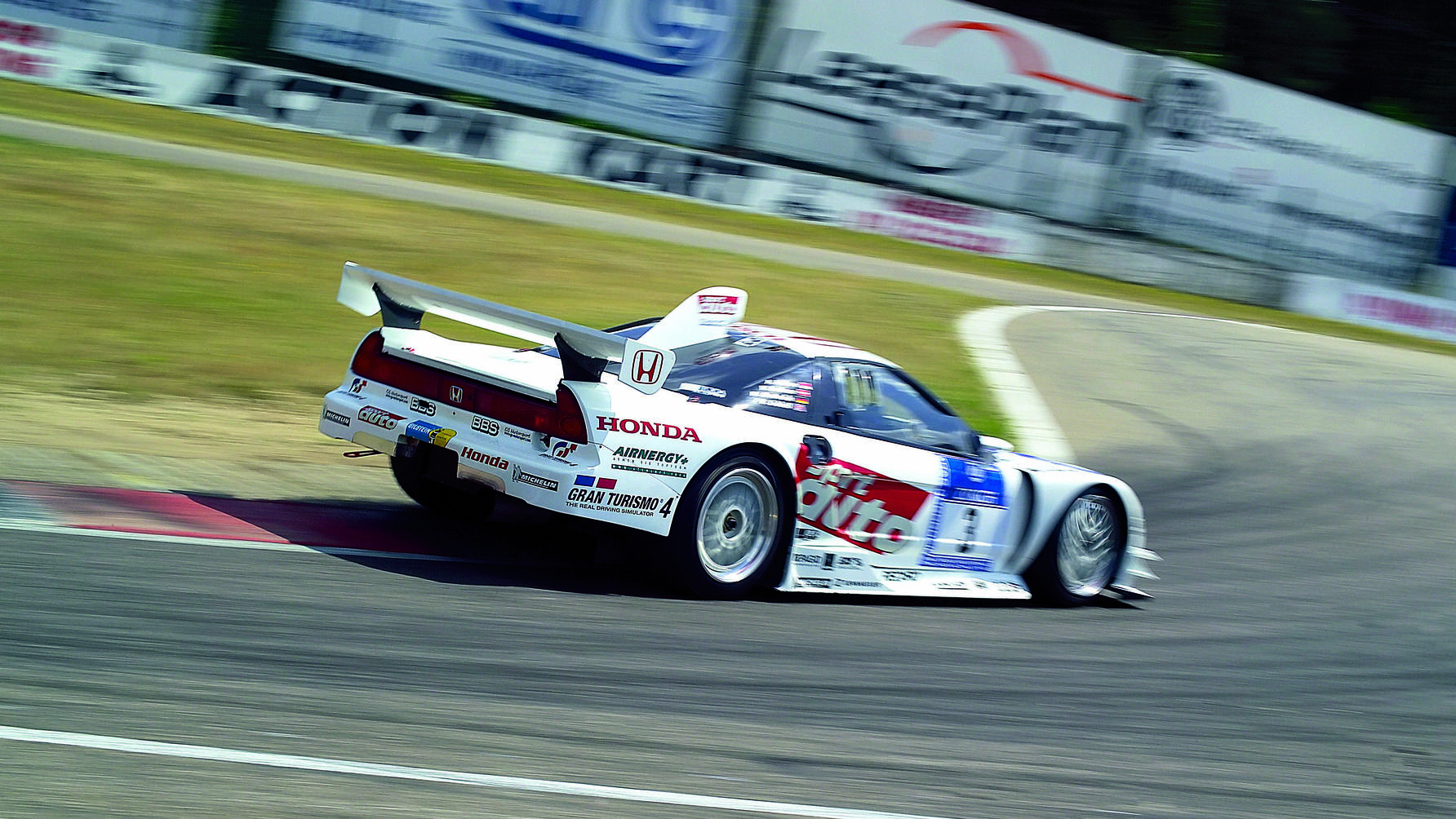 Now imagine being in a Mini with this car closing in on you, flames coughing out from its super-loud exhaust pipes. That proves enough to spook the driver ahead, tipping into the chicane harder than he should. He suddenly double-spins, clattering from side to side of the track and strewing a trail of dirt behind him. I find the NSX-GT fishtailing sharply as its hot, sticky slicks transfer from dry tarmac to a layer of loose dust. Lungs hurting and with visions of quite how much engine is hanging far out behind me, somehow the car manages to regain its orientation. It’s way more benign than it looks.

By now the sweat is weighing my race suit down. I stretch forwards to flick a toggle switch marked ‘cool suit’, but nothing seems to happen. I can’t imagine how drivers last the succession of stints that make up a 24-hour race without collapsing at the wheel.

Once more, I’m facing a few concentration issues. For the first time I’ve noticed a race engineer from the team that preps this car, GS Motorsport, hanging over the pit wall. Where he’d previously been holding out my lap times, now he’s showing the ‘T’ board that means it’s time to come in. With six laps – equating to 15 miles – seen off in under 10 minutes, I’m spent.

It’s not just game over for me. Honda has announced that time is finally up for the NSX, too. After 14 years, production of the world’s most user-friendly supercar will come to a halt at the end of this year. With the race programme over too, the NSX-GT stands to remain the furthest they were ever prepared to push it; a spectacular, fiery, quite berserk way to go out. 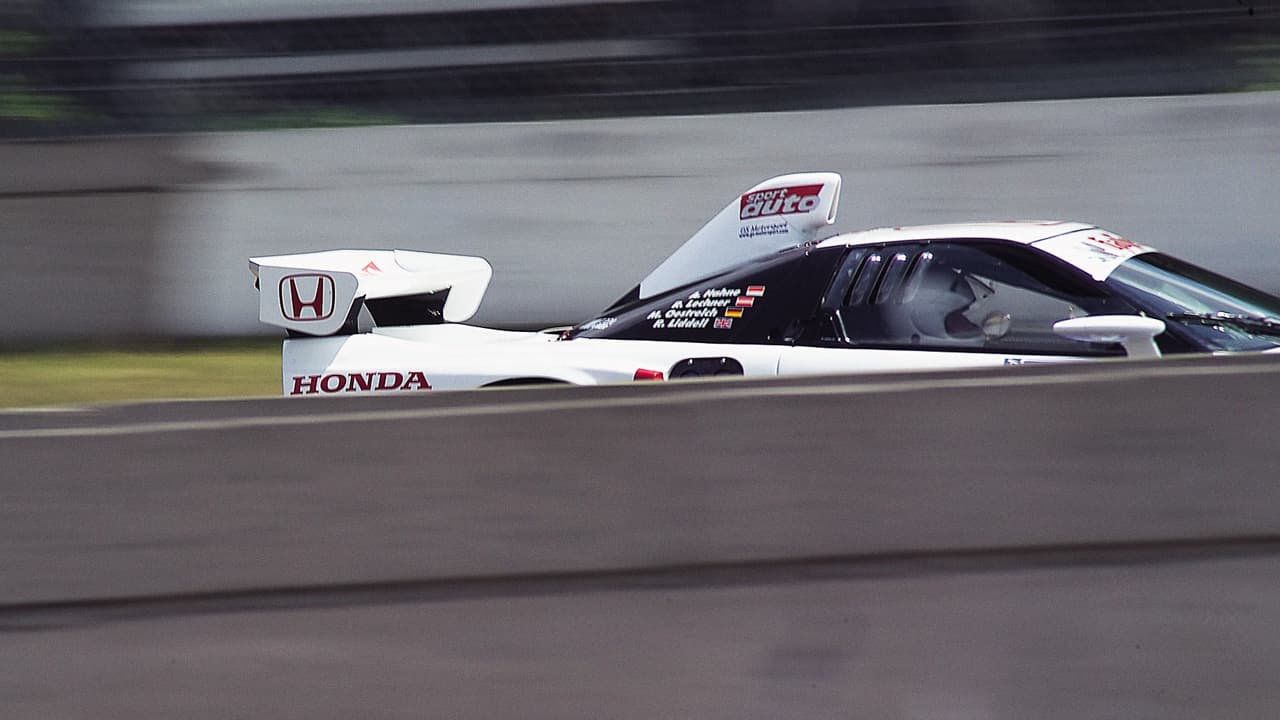