From the archives: commuting in the Agco Challenger MT875B | Top Gear
Advertisement
Retro

From the archives: commuting in the Agco Challenger MT875B

Yes, you will give way. A throwback to 2005, when TG's Peter Grunert discovered the greatest commuter tool

Toast in mouth, tripping along with a shoe on one foot and not the other, I realise that I’m late for work. The postman gives a wave as the local radio warns of traffic chaos ahead. It’s just another Monday morning.

Suddenly, like some War of the Worlds attack unleashed on a quiet corner of a sleepy village somewhere in the heart of Hertfordshire, a cataclysmic explosion of noise intrudes on the scene. 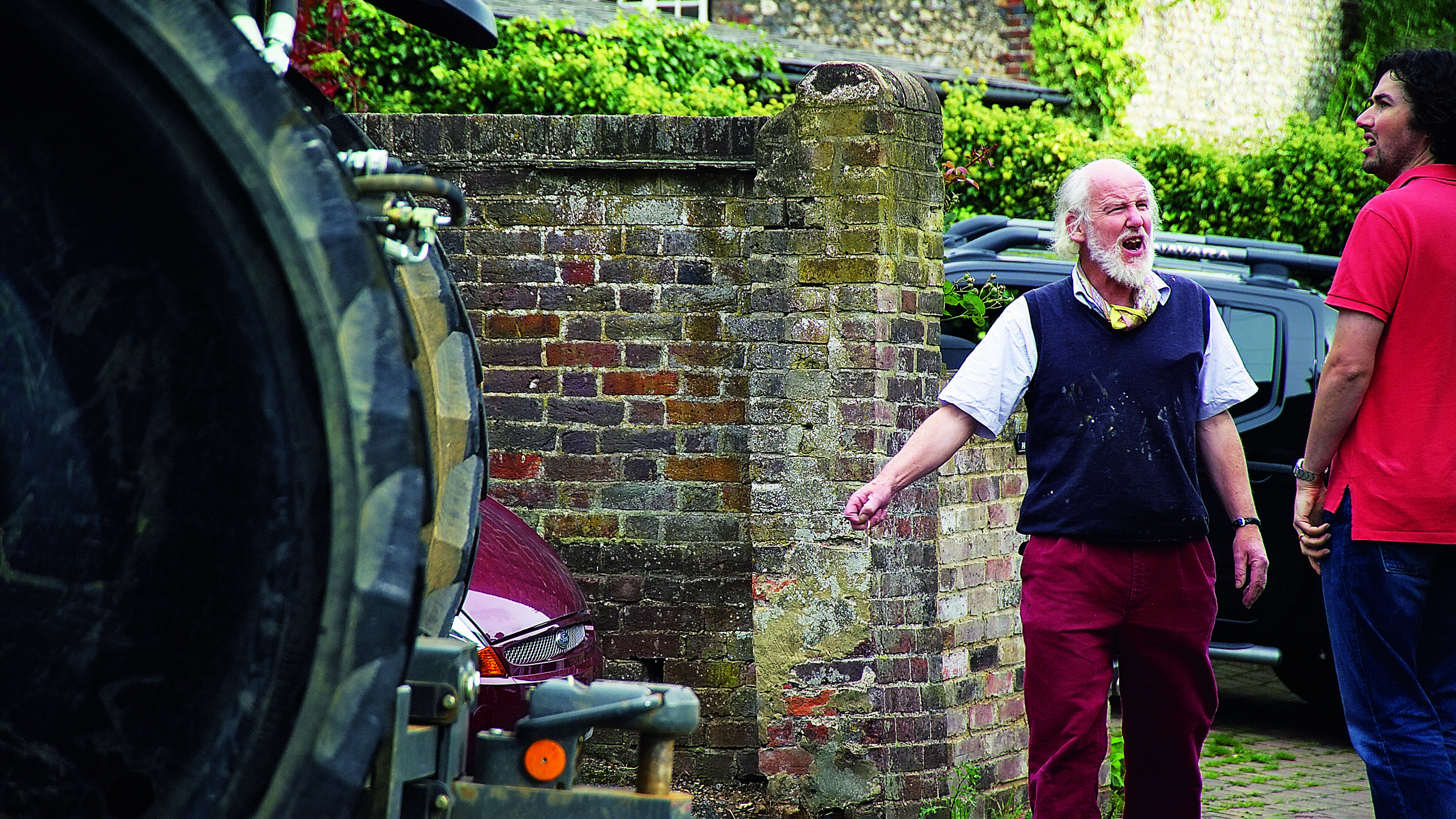 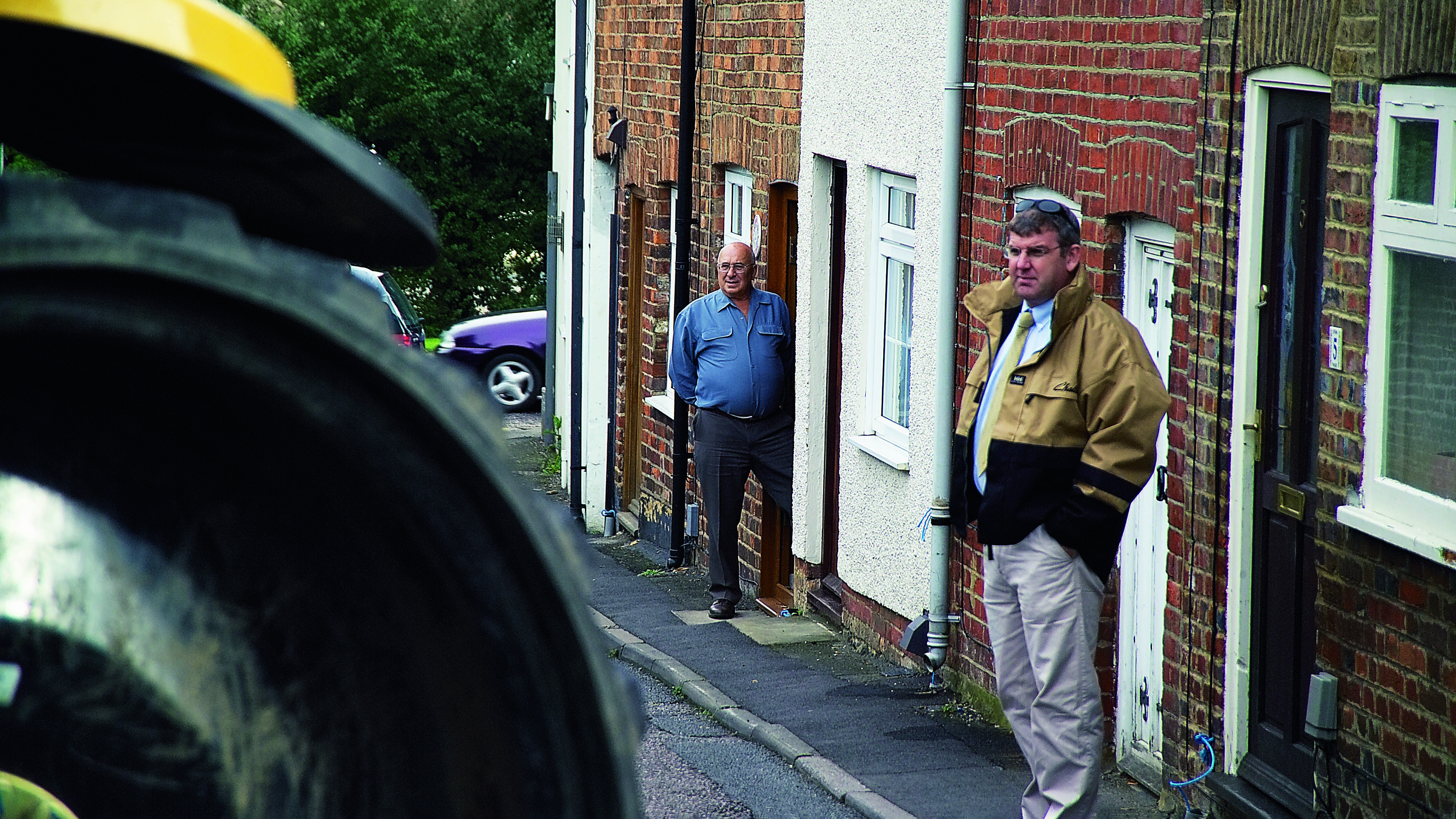 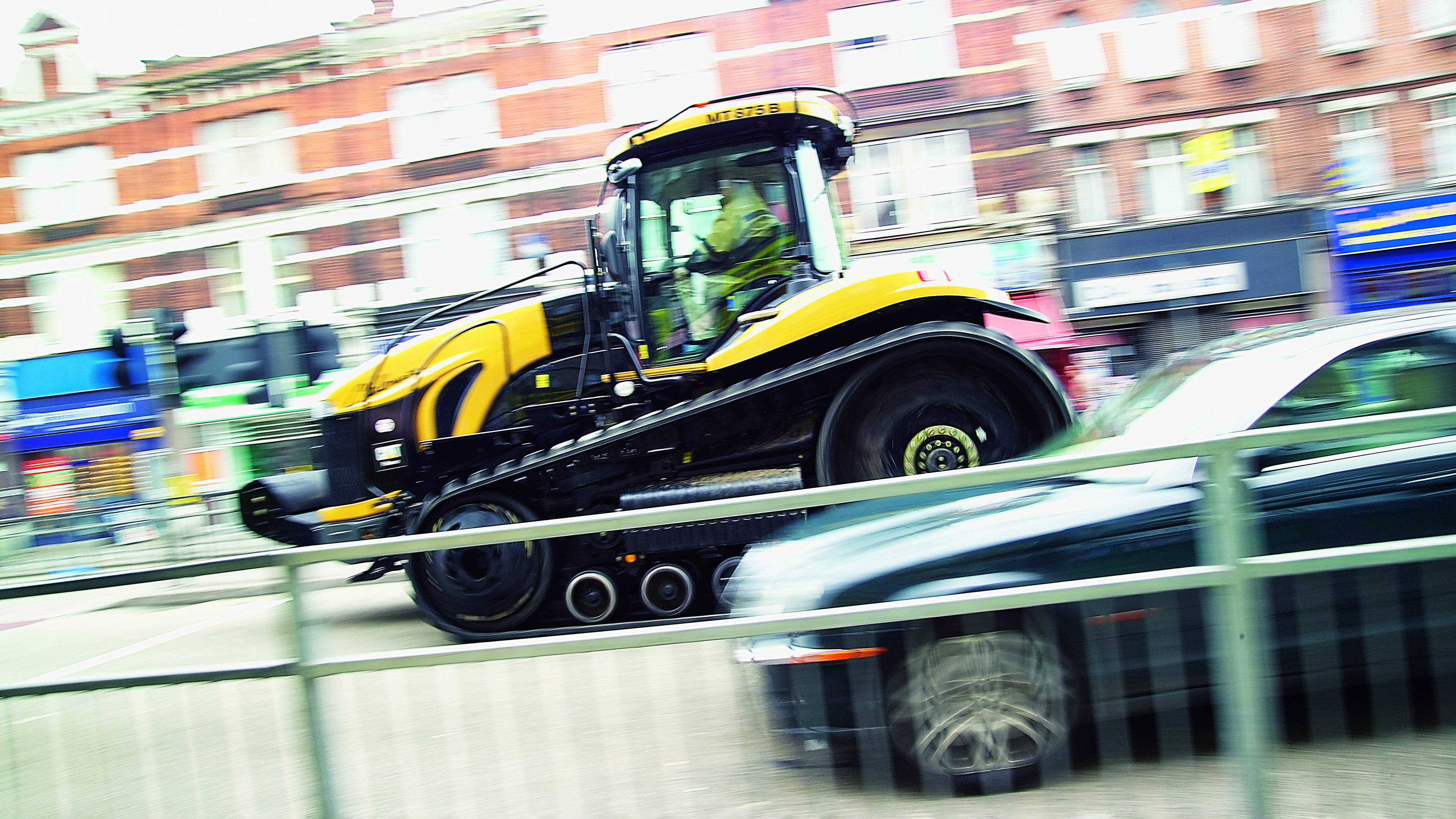 His peace (and more than a little of the surface of his driveway) has just been shattered by the delivery of an Agco Challenger MT875B, no less than the world’s largest and most powerful tractor. With an exhaust stack rising like an elephantiasis-stricken lamp post from the side of its engine bay, this is also almost certainly the loudest.

Call it an exaggerated self-defence reaction to the ineptitude of other road users that I face on my 30-mile daily drive into London, or even a trousers-down, arse-cheeks-pressed-against-the-window gesture to political correctness, this £226,000 farmyard behemoth is what I’m commuting to work in today.

Already, one major dilemma is presenting itself. There seems to be a strong chance that the Challenger will become stuck before I’ve even had a chance to get its vast bulk moving.

Tidying myself up as I venture outside into the commotion, just climbing on board proves to be quite a feat. There’s a flight of steps to negotiate to reach the cabin, then the air-suspended seat needs adjusting in all directions to suit my weight and shape. Scattered before me is a vast array of controls guaranteed to provoke total panic in anyone more used to a car.

Instead of an accelerator pedal there’s a sliding hand throttle, as last used on the bridge of the Millennium Falcon to make the jump to lightspeed, but unlikely to produce the same result here. Instead of a conventional gearbox there’s a push-button Powershift transmission, with sixteen forward and four reverse speeds. And instead of regular tyres, there are twelve wheels sitting inside deeply treaded, rubberised tracks.

The preposterous thing is, anyone with a car licence can drive a vehicle like this unaccompanied, just so long as L-plates are stuck on. I’m keeping instructor Richard Miller perched alongside; at the very least, the extra pair of eyes should prove useful. 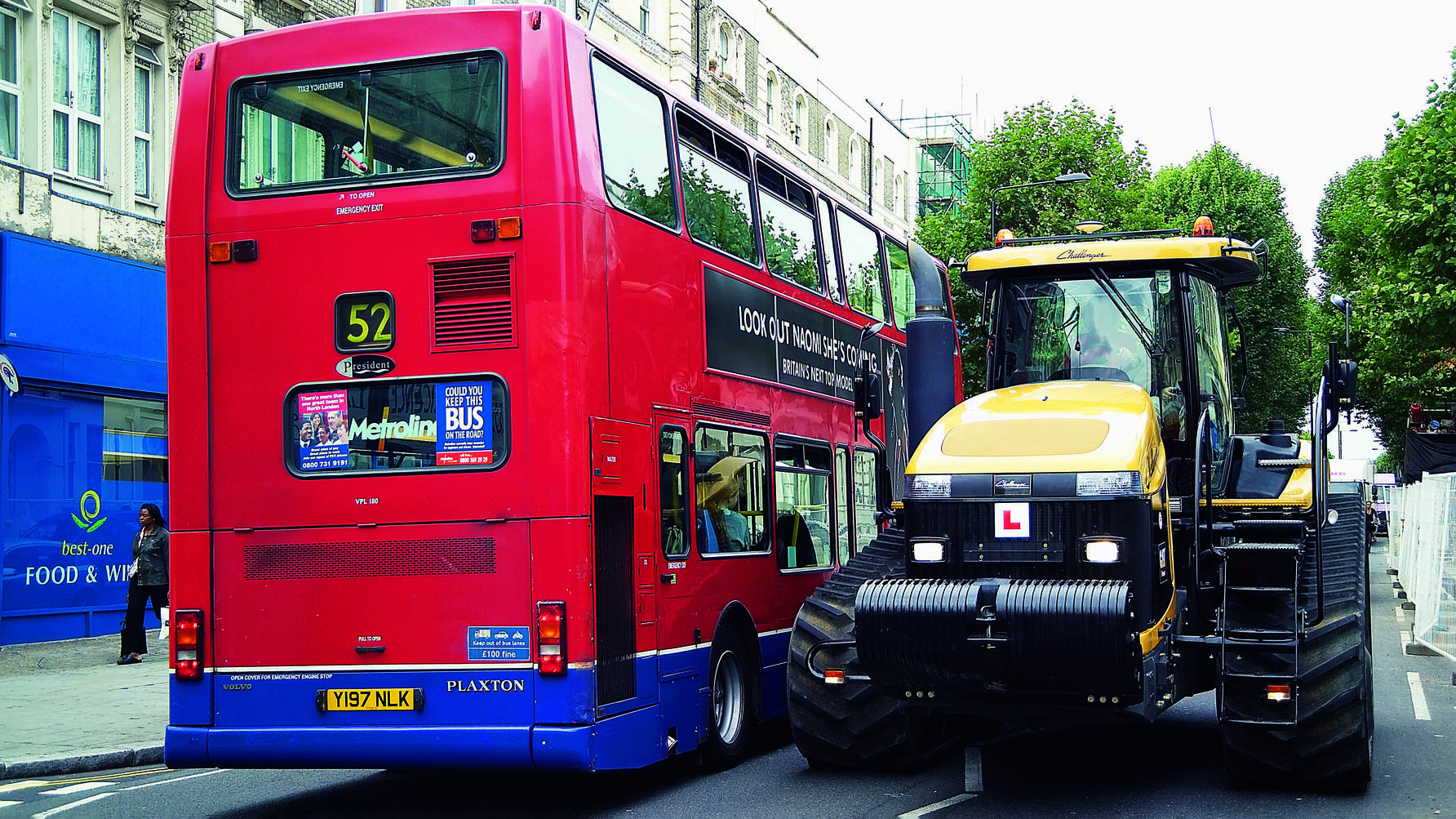 It’s impossible to ignore the scale of the Challenger. I had a feeling it was going to be comparable to an HGV but, oh no. At 3.4 metres across, it’s a full metre wider. That’s the equivalent to driving two Fiestas side by side, with space left in between. The lane I live on is narrow, one way, with cars parked on one side. I haven’t a hope of escaping.

It lurches violently forwards. Up front is a turbocharged 18.1-litre Caterpillar diesel engine, a locomotive-like turbocharged straight-six delivering 570bhp and a ridiculous 1,916lb ft of torque. It can also produce a brief 42 per cent boost, if a plough being pulled along behind is sensed to have become wedged in the ground.

I’m struggling just to place this monster to within an accuracy of millimetres on each side, a crowd now having gathered like onlookers at a medieval execution.

“Steady”, shouts Richard, the sensitive speed-variable steering threatening to whip the back end round and wreak yet more destruction. With the tracks able to rotate at differing speeds, the Challenger can pull a full 360 within its own length.

Like the release after a lengthy bout of constipation, somehow it pops free from the lane. The relief is written large across my face as I’m struck by a brief but ill-advised sense of invincibility.

The route ahead will bring many more obstacles. With a top speed restricted to 24.6mph, the Challenger is banned from motorways. We’ll be heading down the A41 instead, skirting around Watford before hitting North London. Possibly, quite literally.

The difference in speeds at the entrance to the dual carriageway is fearsome as cars come blasting past at 70mph and upwards. Close to controls for air-conditioning and a CD player, I find a switch for the roof-mounted amber lights. Flickering away, they provide a vital warning of what’s about to form a rolling road block ahead.

Inevitably, the Challenger needs to straddle two lanes. In an effort to avoid witnessing the full embarrassment of the queue building behind, I focus on holding a straight course. Had I headed off-road instead, there’s a gadget on board that could well have helped out. A satellite navigation system can be linked to the steering to make small automatic adjustments, allowing dead straight lines to be ploughed to within an accuracy of a single inch over fields. You can see the uses in a machine chiefly sold for carving up vast tracts of the US mid-west. 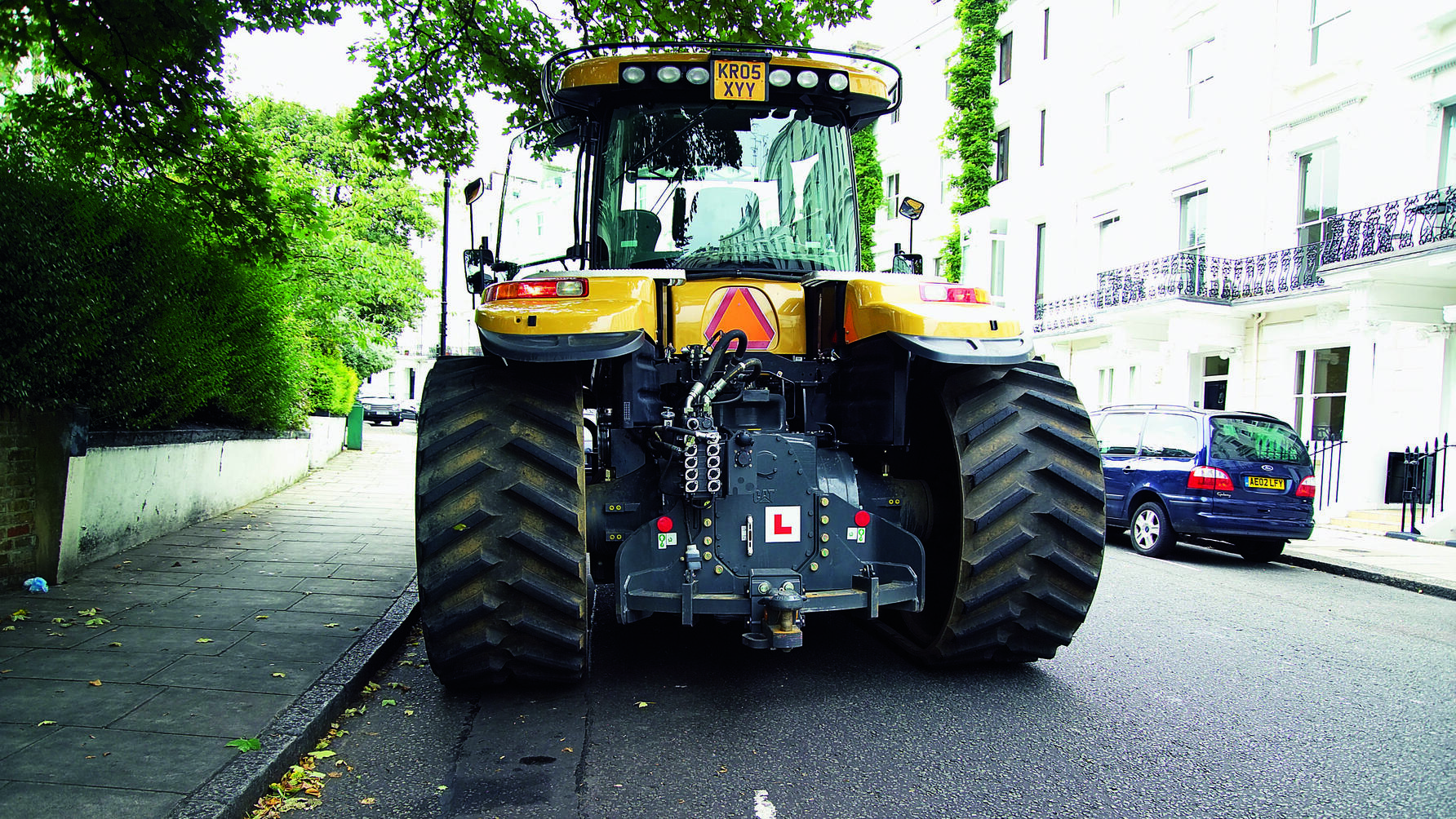 While the Challenger is unquestionably intimidating in stature, somehow I’m feeling less tension than on my typical run in to work. There’s a perverse sense of pleasure to be gained from the look of panic on the faces of drivers in front as I come looming up on them at junctions. Also, no one dares to cut me up on roundabouts; of course, there’s scant chance of them being able to get through. And for the first time ever, triggering a Gatso camera has become a physical impossibility.

Still, hazards that have never crossed my mind before now call for consideration. At Staples Corner, one of the busiest arteries feeding traffic into central London, I approach a railway bridge with a height restriction. If the Challenger gets rammed under here, it could bring half the capital to a halt. I roll the throttle back, flick the gear selector down to tenth and push hard on the big brake pedal, before briefly hitting the crawler pedal that disengages drive... none of which comes instinctively when faced with the need to pull up in a hurry. Lining up square in the middle of the arch, the Challenger just passes through.

Potentially the hairiest stretch between home and Top Gear’s White City offices now lies ahead. There’s no room for shyness; in every traffic jam, jaws drop, fingers point and phone cameras come out. One learner cabbie out doing The Knowledge almost hurls himself off his step-through moped as he tries to grab a shot. 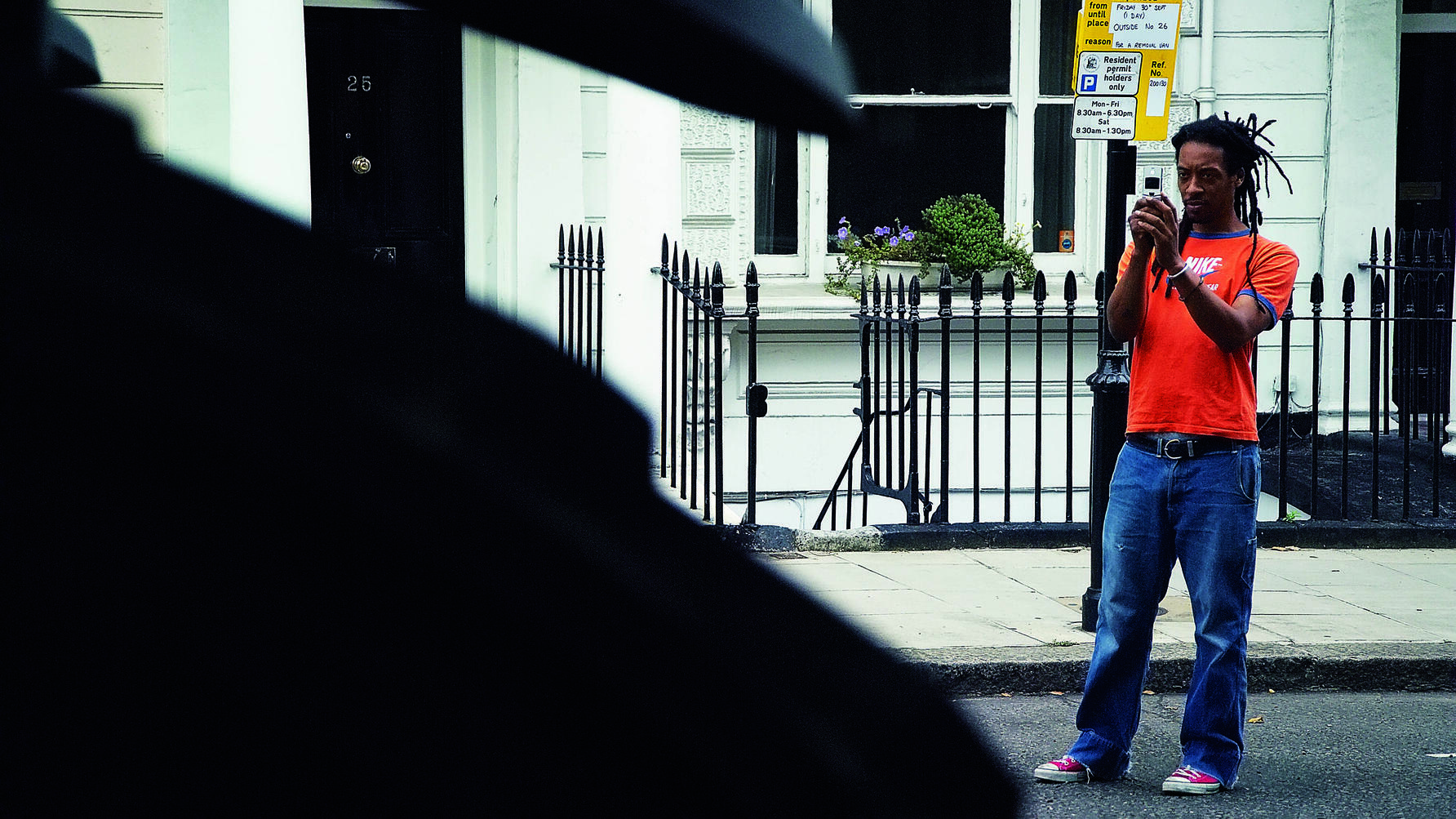 A little further on, a white van man leans out of his window and makes an up and down waving motion with his flattened palm; it takes me a while to work out that this isn’t some filthy gesture, but rather a suggestion that I should drive straight over the top of the snarl-up in front. The closest I get is when forced to ride the tracks over kerbs and the edges of traffic islands through the tightest sections of Edgware Road and Ladbroke Grove.

The truth is, there are some insanely narrow escapes. A policeman watches with a puzzled look as I brush past a line of cones, possibly confused about which of many traffic law infringements he should have me up for. Soon after, some scaffolders politely leap into their truck and move it well out of the way, freeing my path through. Somehow it seems fitting that a badly parked Land Cruiser Amazon comes closest to being crushed, the tractor’s additional, down-pointing wing mirrors revealing what an intimate brush with destruction it just had.

Resisting the temptation to take a short cut straight across the middle of Shepherd’s Bush Green, I home in on headquarters. Performing one final 90-degree about turn, I pull up outside reception, the Challenger’s bulk blotting out the light from the building’s pebble-dashed frontage, colleagues gawping in silence.

My trip to work has never seemed like such a mission. Glancing at my watch, I realise it’s 5pm. I’ve managed to arrive just in time to spin back round and face the epic journey home. 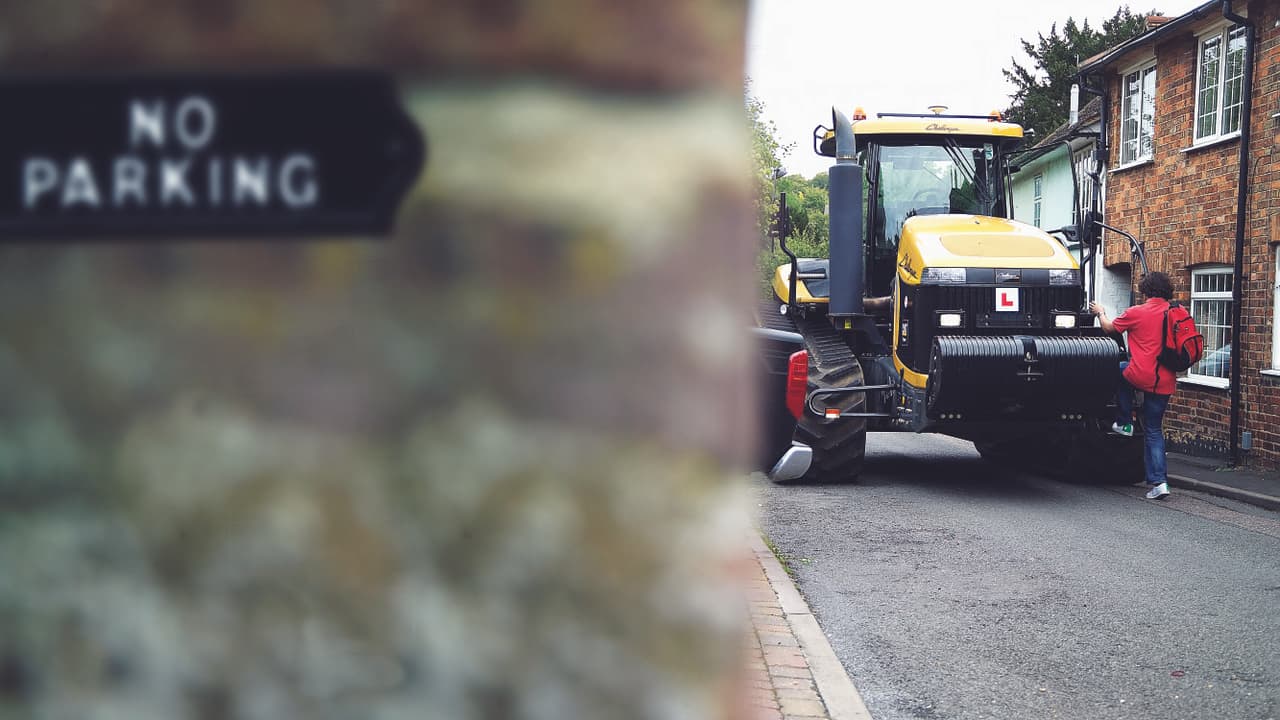