The new Type R might look slicker than the last one, but it’s still a physics-defying hot hatch underneath

If the Civic Type R were a pop star, it would be Taylor Swift. Or possibly Harry Styles. Talented youngster grows up in the public eye, goes through changes, has a bit of an experimental/outrageous phase and then settles into a happy bout of maturity and broad appeal. There’s a comfortable self-referencing of things that have gone before remixed for a modern audience; Swift and Styles play with the music of the Sixties, the Type R with its level-headed back catalogue of reliable, accessible greats inspired – but not bound by – racing. Though I doubt Swift gets as specific as the Yoshio Nakamura and Shoichi Sano’s Honda RA272 of 1965 (the V12 racing car that delivered Honda’s first ever F1 win). Suffice to say, growing up is hard to do. Weird analogies are even harder.

But looking at the newest version of the Civic Type R, glistening in traditional Championship White paintwork at the Tazio Nuvolari circuit in Italy, you can’t help thinking that the CTR has finally settled, found its niche. It’s still very obviously a fast Civic, but it’s calmer looking, more confident. A world away from the fast-but-obnoxious last gen. But more of that in a minute – first, we need a bit of backstory. 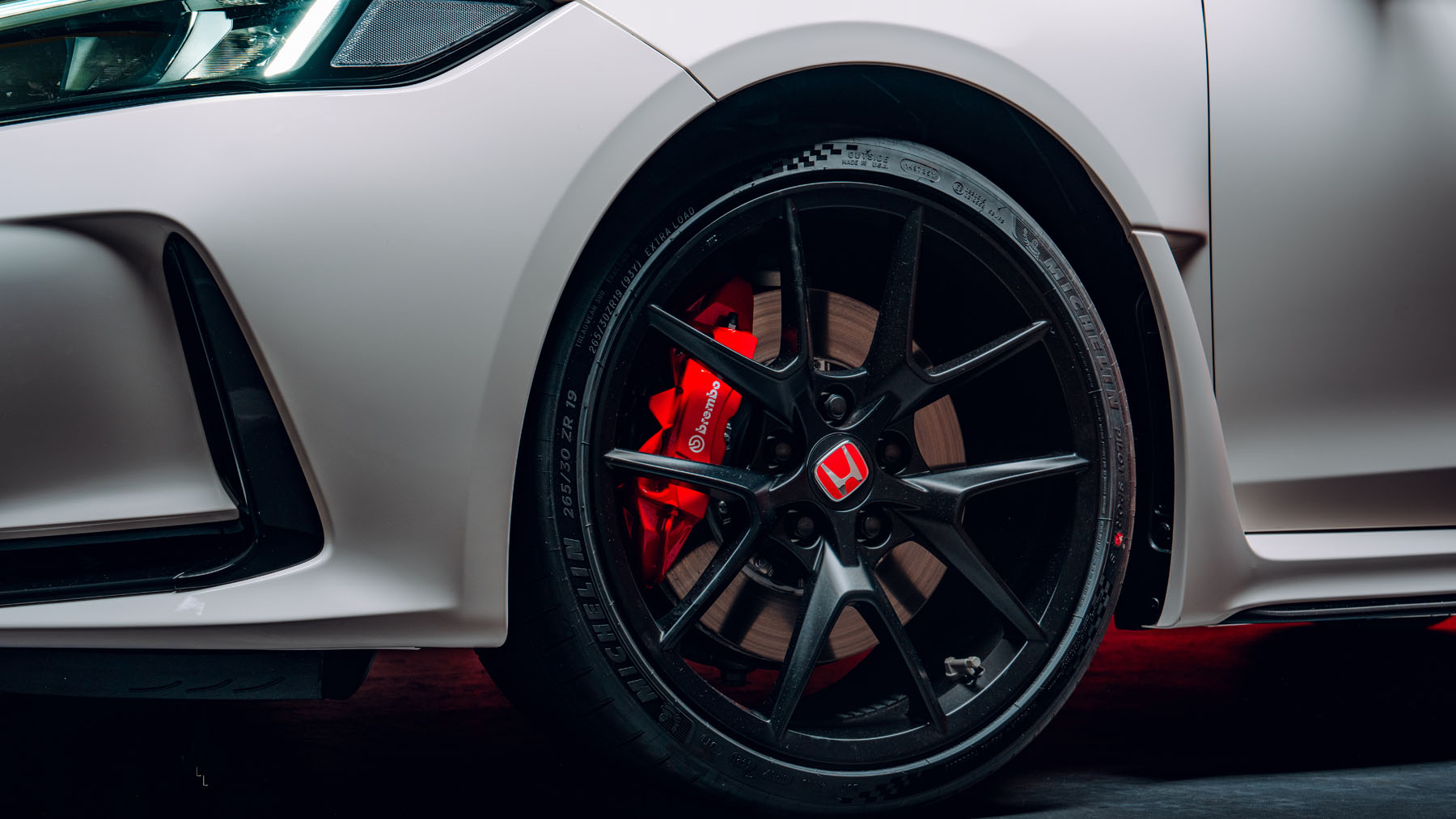 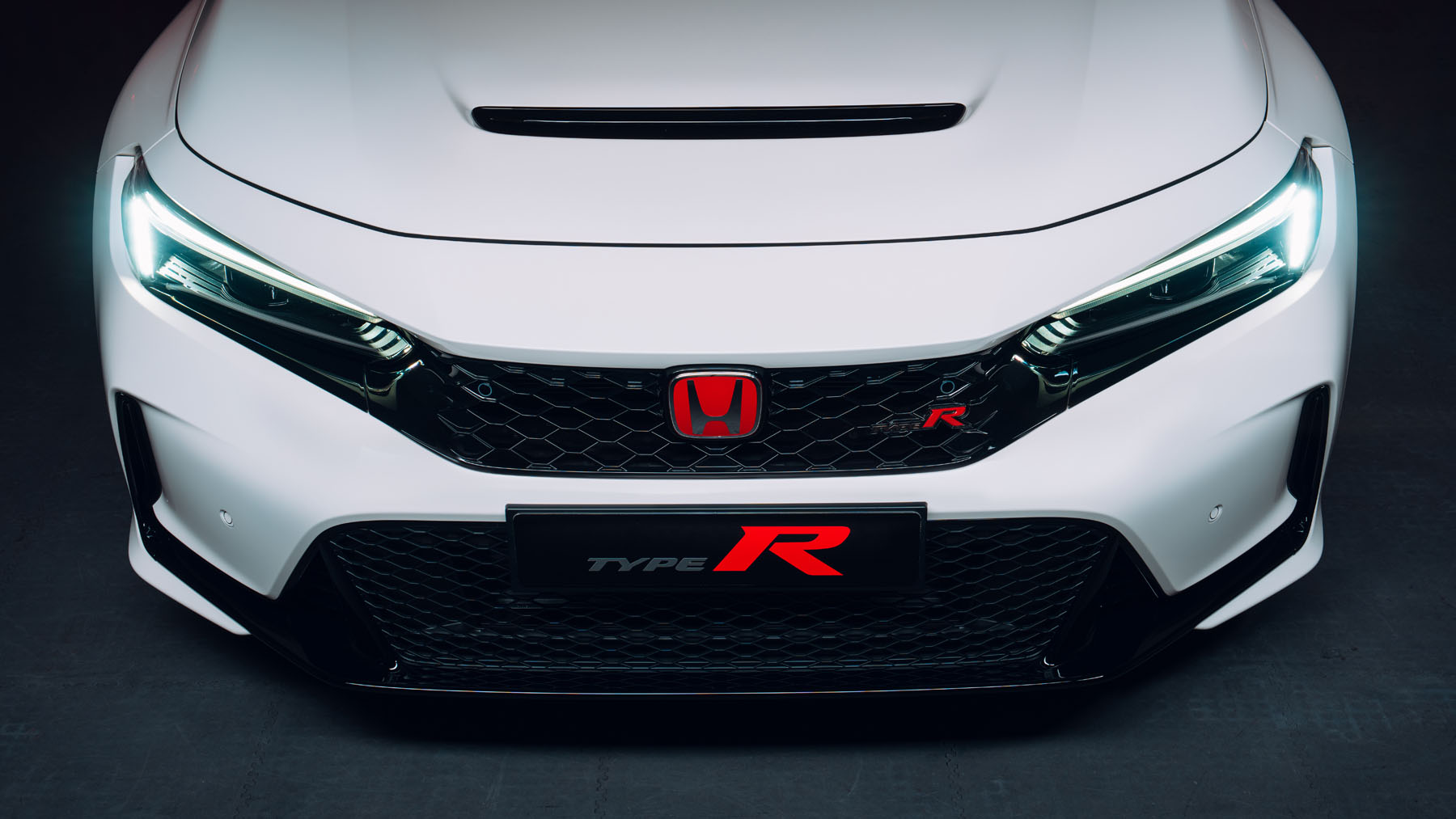 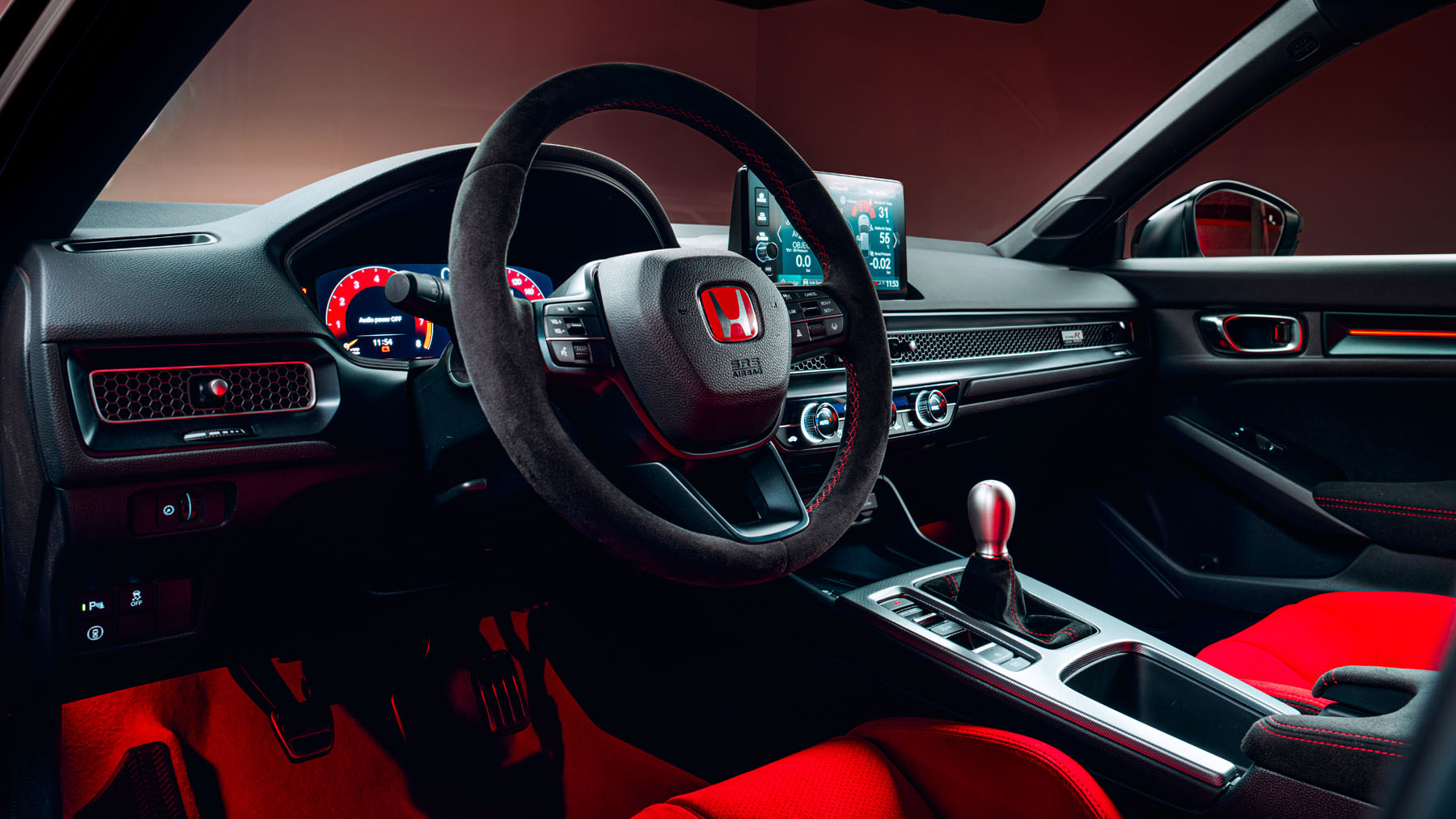 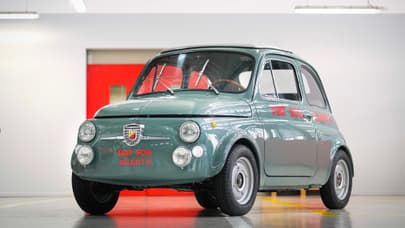 Fiat’s heritage division has restomodded a 500 from the Seventies

The fastest of the Civics has always been about producing an engaging four-cylinder, front-wheel-drive manual hatchback. Something lightly practical that delivers for the drivers among us. Thus, we’ve been treated to a proper jumble of model designations during the Civic Type R’s lifespan: EK9 (’97 and JDM only), EP3 (the boxy one from ’01), FD2 (’07, Japan), FN2 (’07 – the wedgy one) and 2015’s FK2, which got all box arch and bewinged, and then the FK8 and the attendant specials which basically looked like they were designed by a 12-year-old with a plastic fetish. Now we are at FL5, and things have changed. This is the Civic Type R after it has forgone the need to be quite so attention seeking.

Part of that comes from the stock ingredient. The new Type R – obviously – takes base inspiration from the latest generation of Civic (specifically the e:HEV), and that means a smoother, less visually frenetic germ from which to culture the faster variant. Some have immediately described it as boring, although they’re probably the same people who also lauded the previous gen Type R for its dynamic ability while damning it for its super-aggressive styling. But this one seems bigger, more Integra-ish. In the metal, it’s a very good thing. 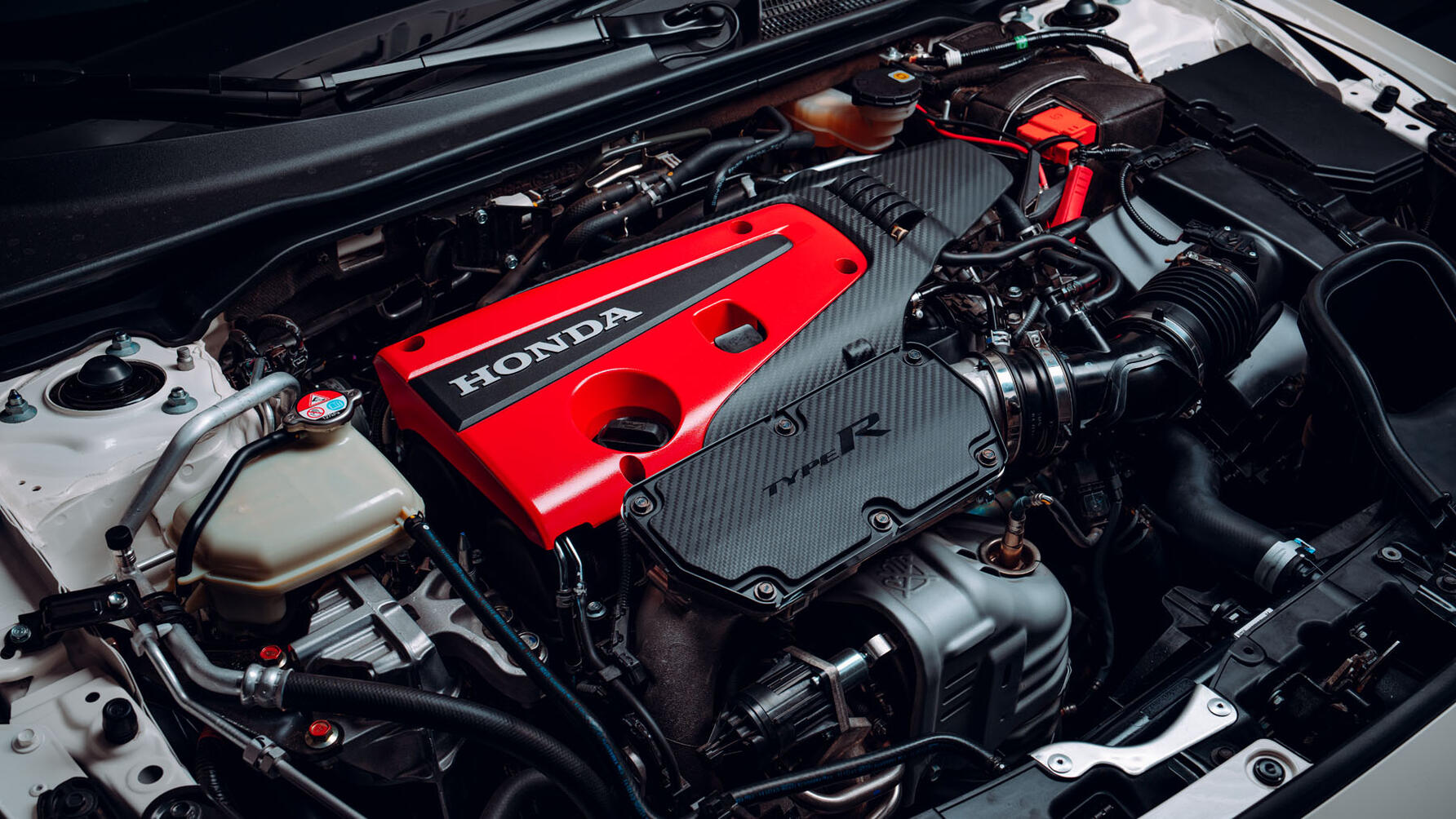 The white paintwork highlights the Type R-specific bits very nicely. There’s a big grille to cool the 2.0-litre turbo, for which exact figures are unhomologated as yet, a bonnet duct to pull air from the forward edge of the aluminium bonnet. Wider arches are bulbous and shaped rather than stuck on, and the subtle side skirts have winglets that both convince the air around the back wheel and provide a small measure of stability. There’s a slightly outré rear wing with cast aluminium struts that present both a thinner aerodynamic profile and exposes more of the underside of the aerofoil for better balance, a new rear Venturi and a triplet of mortar-sized exhausts. Honda says that the Type R has 100kg more downforce than the standard car, but seeing as the base version probably has very little, it’s a bit like saying it has more downforce than a bicycle. Still, described baldly, it sounds more extreme than it is – but in my opinion it’s the most handsome, elegant Civic Type R since the EK9.

It’s bigger, mind. The basic structure may be borrowed from the previous generation, but the wheelbase has grown a smidge (35mm), and new manufacturing tweaks – like bonding the hell out of the chassis with ‘structural adhesive’ instead of strengthening welds – mean that the new R is about 22 per cent stiffer than the base car, and 20 per cent lighter. Stiff and light mean nimble and responsive – and there’s no electrical help in here either. This is all IC motor before the next generation of Civics become either heavily battery aided or pure electric. Plus the wheels have dropped an inch to 19s for lightness, employed a ‘reverse rim’ set-up (the lip is at the back of the face to help with loading), the tyres are 265 Michelin Pilot Sport 4S, and the brakes are beefy Brembos. The car is front-drive only with a diff, and there’s a six-speed manual with the traditional Type R aluminium gearknob. Always a favourite, that. 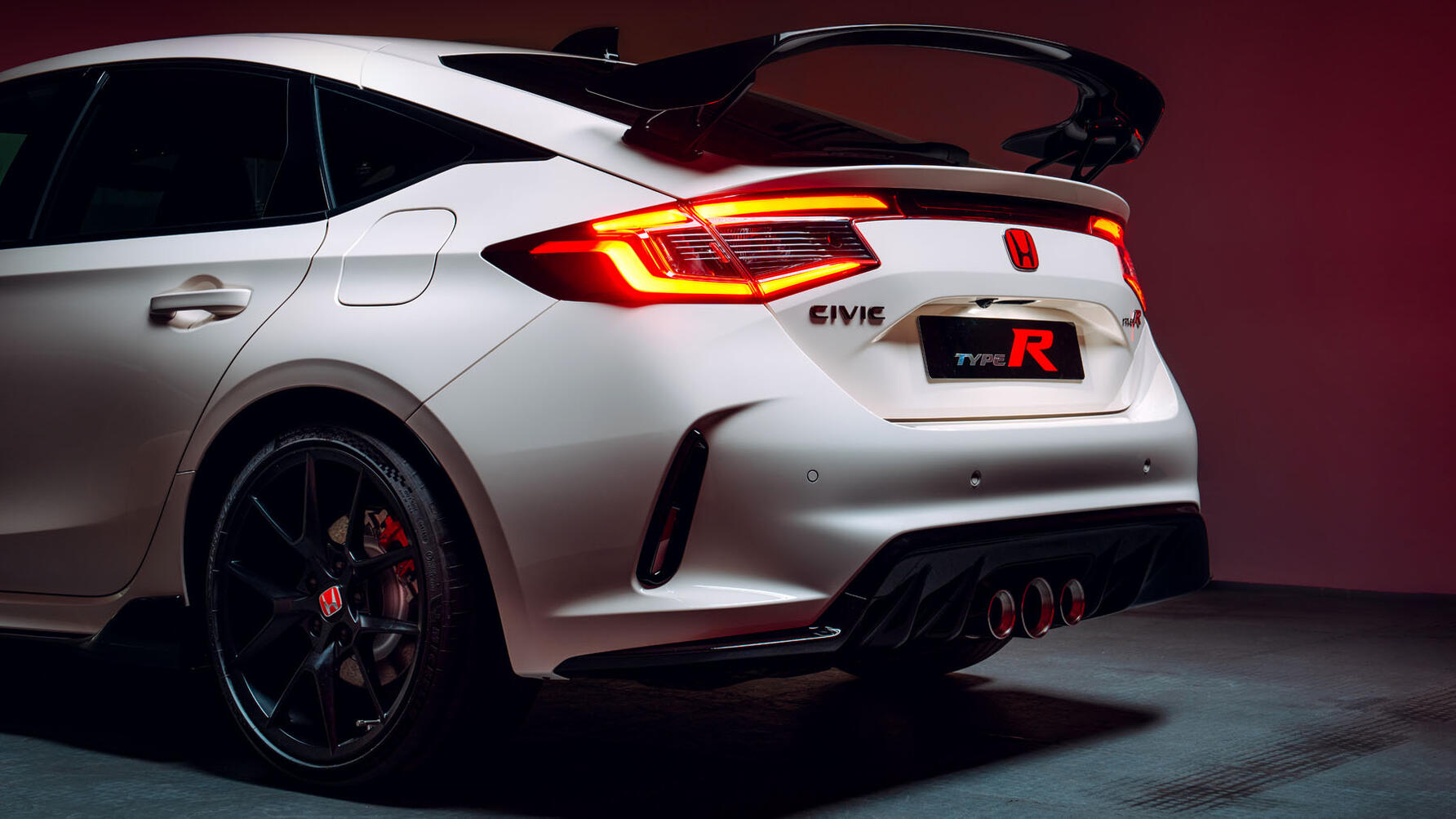 As for the rest of the inside, it’s a peach. In the same way that the outside has matured into something more resolved, so has the dash and attendant central touchscreen. There’s a set of shift lights at the top of the instrument binnacle in your eyeline, and four modes for the Things That Can Be Changed. So you get Comfort, Sport, R and Individual modes that alter suspension, engine response, steering, sound, rev match and gauge style. The Individual mode being the most interesting to UK buyers, seeing as it will allow for a softer suspension set-up but with the more razored throttle response. That’s a good thing. Then there’s a frankly brilliant Alcantara wheel (slim, the perfect diameter), an aluminium centre console and the kind of ergonomics in terms of wheel-to-gearknob that make you just want to drive it. And the seats. The seats are absolutely fantastic and a proper highlight; a complex eye-twist of polyhedral shapes that are nevertheless supremely comfortable and yet utterly supportive, draped in the traditional Type R blood red. There are black back seats, but they didn’t seem important.

And yet... the big disappointment of the encounter has nothing to do with the car – we weren’t allowed to drive it. What we’re looking at here is a glancing blow, a first contact with the next generation, so we were relegated to a brief hot lap passenger ride on a test track picked by Honda, featuring an experienced Honda driver. Although that can tell you a surprising amount when the driver is exceptional and you happen to accidentally bait him into driving like a lunatic.

First up, the new Civic Type R feels like it’s got about 330–340bhp. That makes sense, seeing as Honda reckons it’s more than before (previously circa 160bhp/litre from a 2.0-litre), but it doesn’t feel ridiculously exaggerated. What it does feel, is impeccably urgent and clean through the rev range, the box snapping through the gears like you might hope. Some of that is down to a host of tweaks that have turned the 2.0-litre into something more refined. So there’s a turbo that’s been completely redesigned to dispense with a truckload of inertia – it has reshaped blades and fewer of them in the housing – a water jacket to cool the manifold, intake VTC and exhaust VTEC. The crank is significantly lighter and there’s an electric wastegate to minutely manage back pressure. It pulls all the way through the rev range, and pulls hard – though there doesn’t appear to be any of the step change reclimb that you used to get with old school VTEC engines. This one’s all about the go. VTEC never kicks in, yo, because it’s already on. 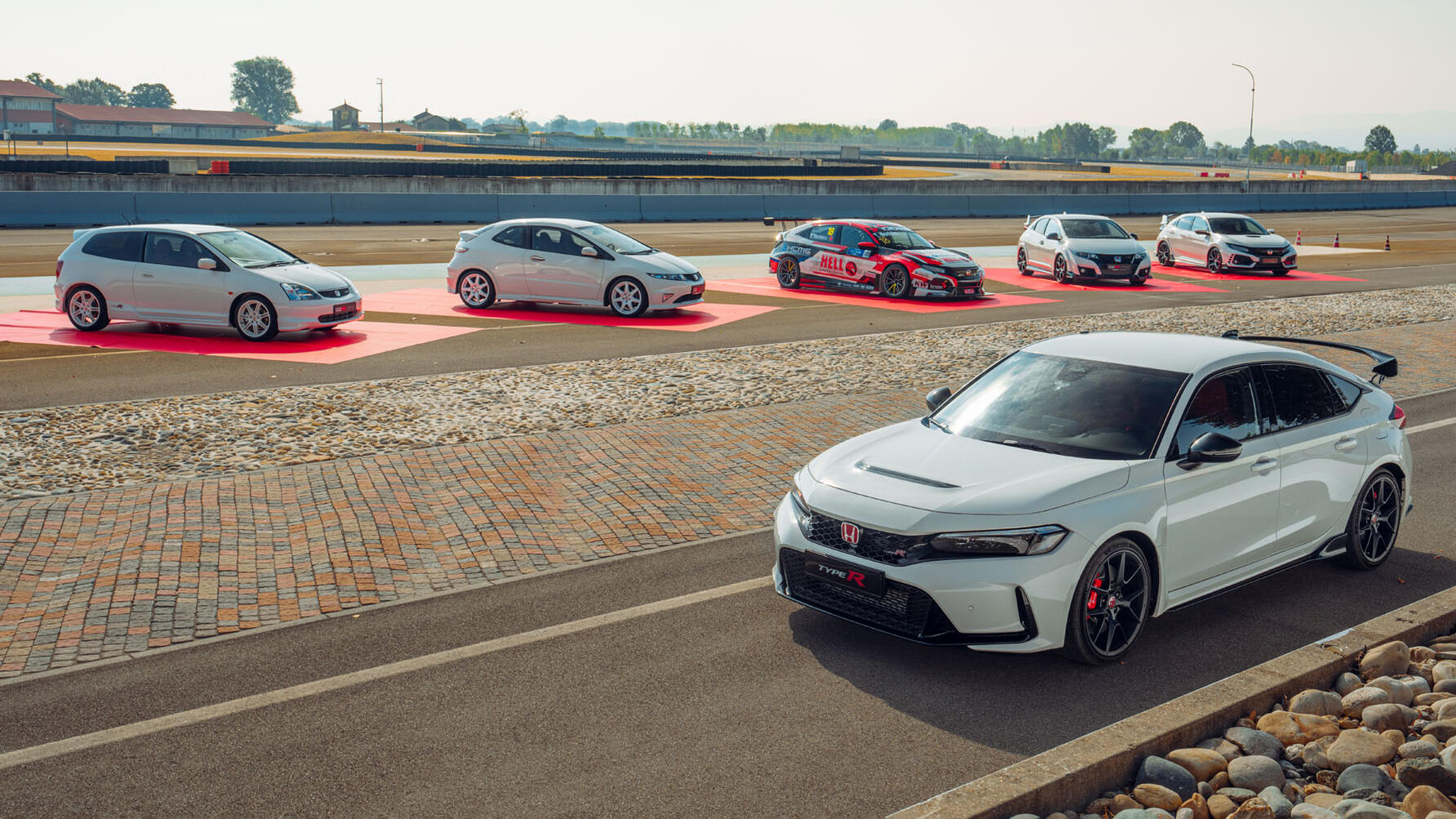 The car itself also moves around, just like you hope. There doesn’t appear to be a huge amount of on-demand lift-off oversteer, but the car will trim its line if you back off the throttle, and to be honest, 50°C track temperatures and a racing driver probably mitigate some of the bad/amusing habits. Once settled though, it sticks to a line, shading to gentle understeer if there’s too much corner speed – all stuff that appeared very easy to correct via steering that seemed to require very little effort. Our pilot was having a whale of a time. Which was a bit frustrating, if we’re being honest.

One thing that did seem to be working – again, albeit on a smooth track – was the dual axis front strut suspension set-up that’s been designed to deal with torque steer. The new Type R simply didn’t appear to be squirming even on proper, full throttle corner exit. Management of throttle, certainly, but it grips and goes, holds its line and does everything you want it to. Even the brakes were indefatigable, and they were being hammered for several track sessions in high temperatures. In fact, the only real bugbear was the noise – or lack of it. The car we had just didn’t sound very inspiring, from inside or out, and somehow those big exhausts trick you into expecting more. There’s piped-in noise into the cabin from the ASC (active sound control), but to be honest, it never sounded that thrilling. But we were wearing a helmet.

But as first impressions go, it’s all good news. Obviously the styling is subjective, but where you might – slightly – cringe when driving an FK8 over the age of 30, this one looks more conservative, but sweeter. It appears to go, stop and handle in all the right ways, and the people behind it are fully aware of what makes a good Civic Type R. They’re our kind of engineers. Now all we need to do is drive it. 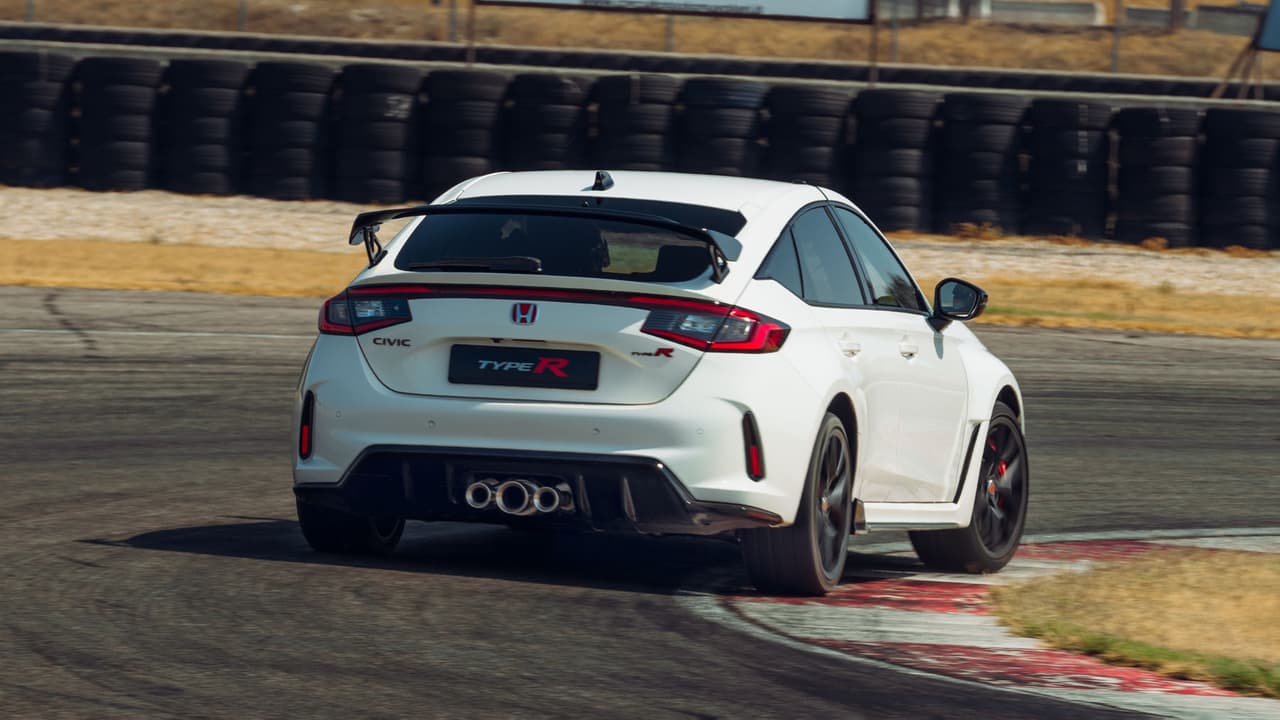