Driving a Ferrari Dino restomod... with a V8 engine

You’re looking at an old Ferrari, sure, but this one is better than new. Sacrilege, or just the shot in the arm the Dino needed?

Modern ergonomics have a lot to answer for. All that time worrying about having your neck curving in an anatomically correct direction and being the same shape at the end of a journey as when you started. All nonsense, really.

My head is canted at a slight angle, my spine kinked the opposite way, my feet draped on yet another bearing to account for offset pedals. The gearstick, ball-topped, evocative chrome wand that it is, is conveniently close, but that’s a function of a cabin that is, by modern standards, on the crippling side of cosy. Welcome to an authentic Ferrari Dino experience if you’re anything over 5ft 10in. And yet... I don’t care.

Because you forget about all about common sense and physical unease as soon as you click-clack the open-gated box from second to third, the car canters happily past 4,000rpm and the Ferrari V8 behind your left ear starts to get operatic and unnecessary.

The noise. Oh my, the noise. There are flutters and induction noises, a thrash of valves overlaid by a bawl of exhaust that makes the hairs on the back of your neck flick upwards. Anyone with even a drop of petrol in their veins will glory in this experience, sink back into the classic Ferrari bucket seat and emit bright, high wattage joy. This is the song of our people. 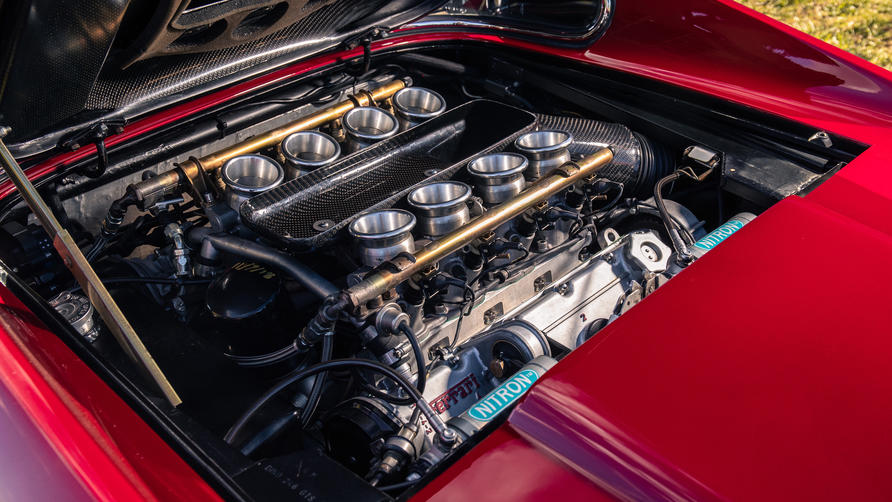 And yet the tune is wrong. Still musical, yes – but the timbre and beat is... something incongruous. A Dino 246 of the late Sixties/early Seventies like this came with a 2.4-litre V6. Hence the name 2.4/6-cylinder; 246. It produced somewhere in the region of 190bhp, which, in a car that barely weighed more than a tonne, was probably enough.

But this Dino... this Dino sounds different, and the sustained shove suggests that it is very definitely not producing 190bhp. Try more like 300. From a 3.2-litre V8 liberated from a later Ferrari 328. It wears 18-inch wheels from a Ferrari 360, covering a braking system from the same model and era.

There are adjustable Nitron dampers and properly controlled movements from the suspension, rather than the usual slightly choppy ride quality that would come with an entirely standard car. Modern tyres settle the car on the road, sharpen the car as it rolls into a corner. And yet, the dogleg first manual box – also retrieved from that 328 – still feels right. The clutch is still a thing to know, rather than simply operate. The steering writhes a little, and the views over the bodywork are authentic and inspiring. The car smells of leather, petrol and hot oil, the steering wheel and dials still wear their age with pride, worn thin and characterful through love. Some of it is, frankly, gloriously period shonky. It’s still a classic Ferrari Dino, except more so. Welcome, then, to the art of Moto Technique.

Sounds quite flash, that name, but Kevin O’Rourke, founder of Moto Technique, is possibly the most down-to-earth human this side of my own father. If I could boil it down into a sentence, Kevin O’Rourke is the kind of man who you want to have a pint with. He’s funny (although some of his jokes are genuinely terrible), he’s passionate, knowledgeable and giving, as well as being wholly uncompromising when it comes to describing the flaws and strengths of his terrifyingly expensive charges. 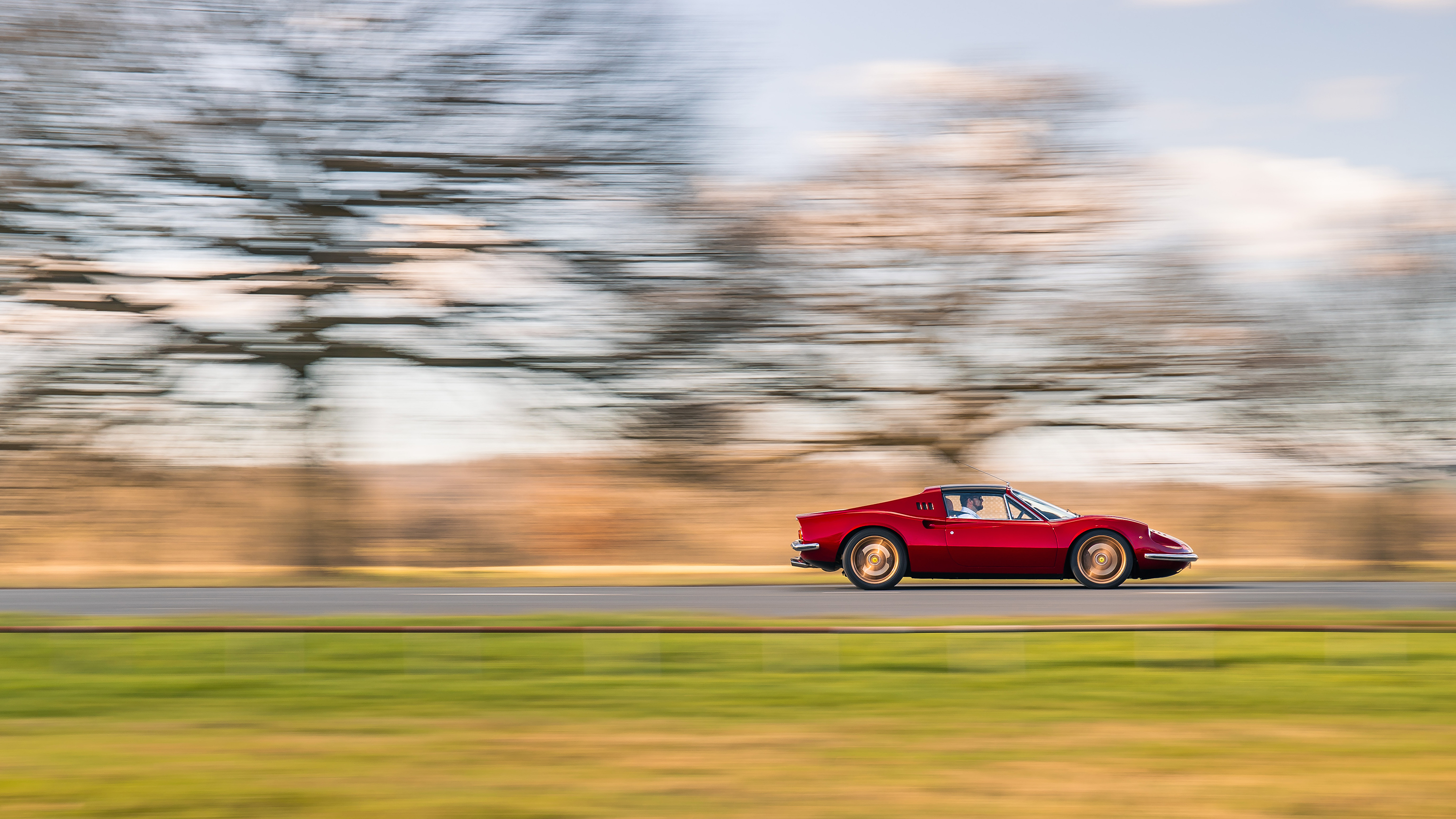 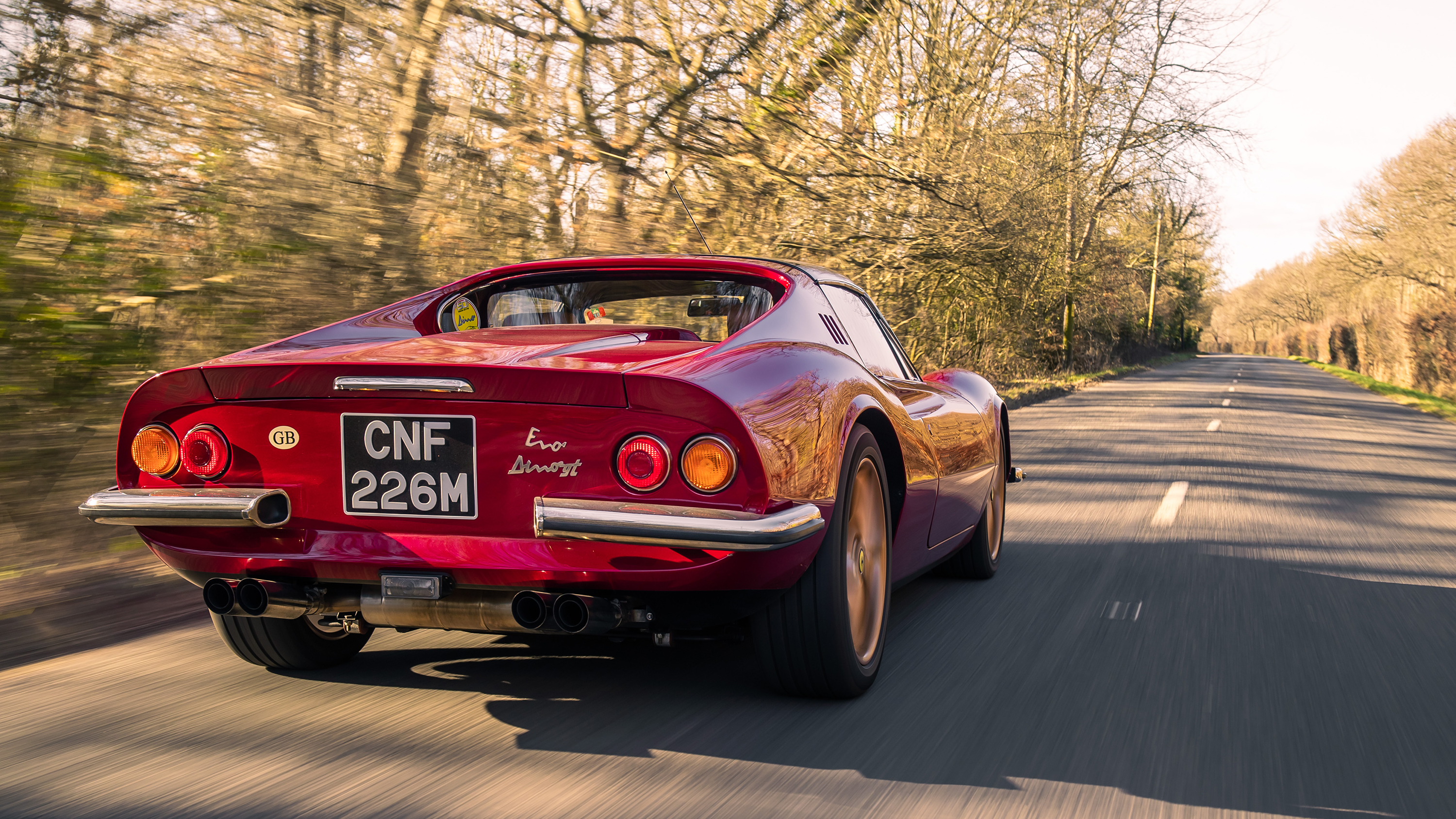 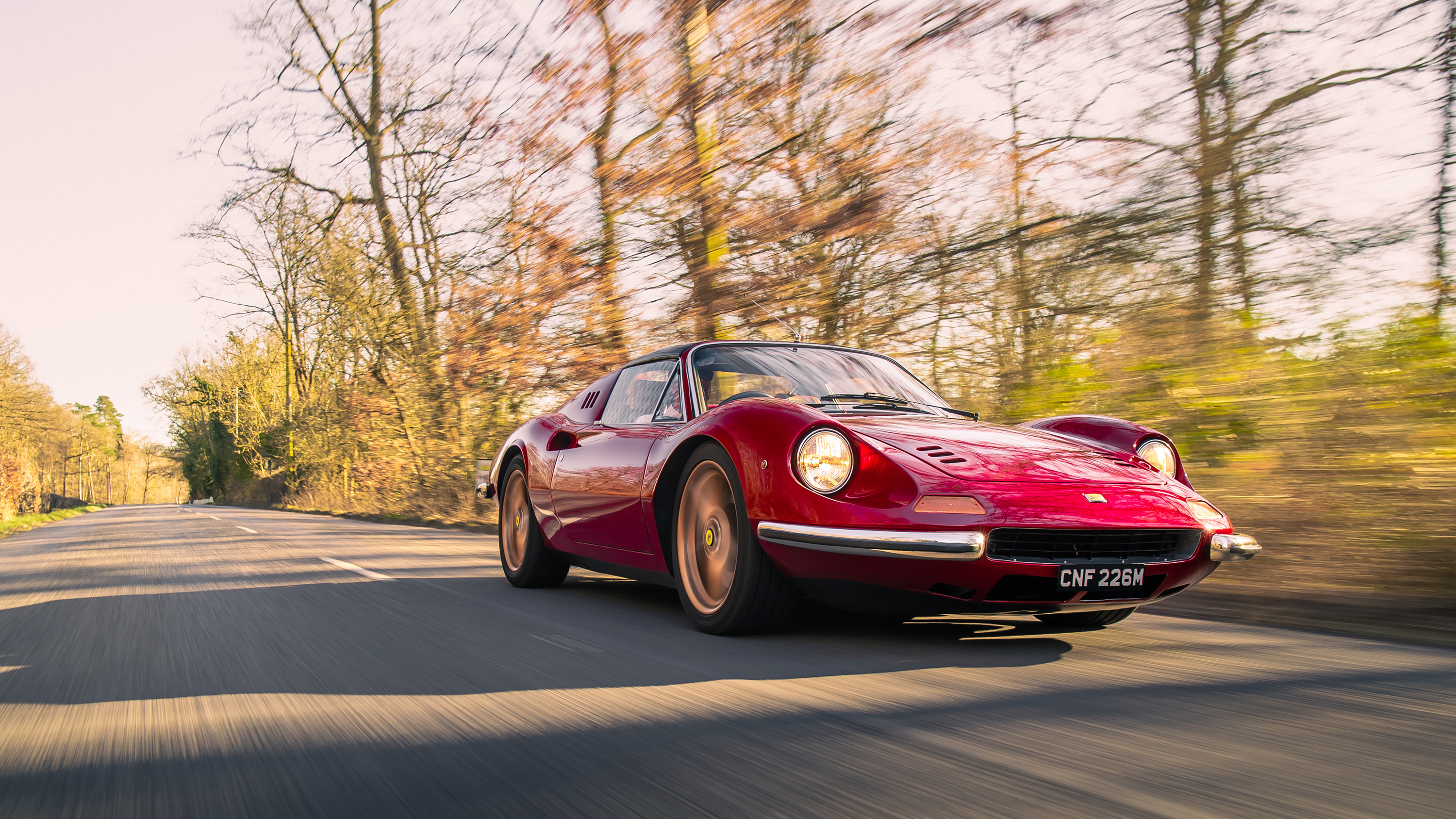 He also knows far more than is healthy about old Ferraris. His particular take on a Dino ‘Evo’ is a restomod that approaches the genre more from the resto side of the equation than the mod. That’s not to say the work is any less intense or impressive – just that the touch is lighter, more focused on the spirit of the original experience. This isn’t a thin skin of classic Ferrari stretched over the geography of a modern counterpart, but a sharpening of the original using a transplant of younger – though not necessarily new – organs.

The explanation for that is glaringly simple. Moto Technique is not a rod shop, but more famously known for world class restorations of very expensive things. And when we say ‘restorations’, we mean big ticket, concours winning, all-the-screwheads-pointing-in-the-same-direction, nut and bolt perfection. Not ‘better-than-new’, but ‘as-new’.

Kevin describes the level of detail that goes into some of the traditional restorations and it is mind-blowing – down to recreating original manufacturing inconsistencies in restored cars, simply because that’s how they’d have left the factory. You want names? Kevin has reinvigorated all sorts from Ferrari 250 GTOs to 250 LMs, original GT40s to 300SLs (both Gullwing and Roadster), Countaches and 350GTs. There’s an Iso Grifo in the shop, and a Miura having some titanium-based engine work casually stowed in a corner.

Which means that Moto Technique comes from the strangely privileged position of knowing exactly what might need upgrading to make a Dino less fallible and better, but within the narrow context of still making it feel something like a Dino. This is a marginal distinction, but one which the evolved Moto Technique Dino manages to make real. 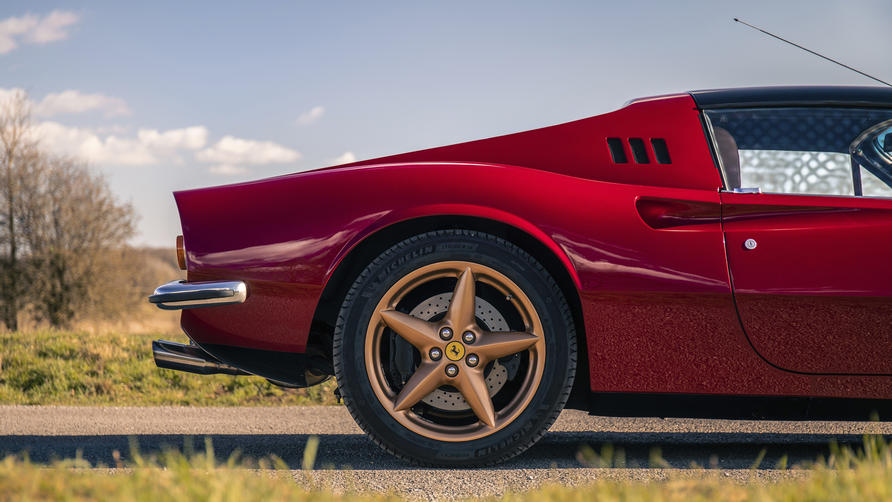 This isn’t a car – wheels apart – that you peer into and see glaringly modern bits, even if there is a smattering of carbon fibre under the engine cover. It’s the kind of thing that has Ferrari people double-taking and saying: “Wait. What?”

Of course, the wheels are a dead giveaway, and they’re deliberately divisive. A larger rim is necessary to clear the bigger braking system, but Moto Technique can cast you a period rim in a larger size if you so wish, and a 17in or 18in Campagnolo looks pretty damn good.

The car you see here is just Kevin’s own ‘prototype’. Subsequent cars have featured a stroked 3.6-litre, throttle bodies, a bespoke crank, titanium conrods, big valves and a MoTec ECU. Basically hotted-up Ferrari goodness, but born of authentic base ingredients. Cars are built to customer spec depending how they want to use them, trimmed to taste by sister company O’Rourke Coach Trimmers (it’s a family business, the trimming is run by Kevin’s son), tuned and tweaked to subtle bespokery.

The customer base for this kind of thing requires something... other, and generally consists, according to Kevin, of everyone from business magnates to pop stars. These are not vehicles for the investment crowd, or those looking for an emotionally cheap and flashy impression – they may be generously usable in context, but they aren’t modern, and they won’t save you with traction control and ABS should you fire it down Kensington High Street with wild abandon. They may be more convenient than before, but to assume they are tamed would be a mistake. Oh, and in case you had to ask, prices are POA, and generally eye-watering.

But what you’re buying here is brilliantly, weirdly niche. It will annoy the stock-or-nothing classicists, won’t appeal to those who need to explicitly announce the depth of their bank account. If anything, they feel like vintage factory hot rods, improved and honed, but without resorting to a root and branch remaking. The word that springs to mind most readily is that they are incredibly sympathetic. Sympathetic to the experience of driving a classic Ferrari, while reaching for just that little bit more. Most of all, these cars are joyous, fun, and make you grin like a fool. When the final accounting comes, you can measure success by the smile on your face.