A full-size Nissan GT-R... operated by a PlayStation controller? Time to hit Silverstone

I’m sat in the passenger seat of a Nissan Qashqai. Beside me is Rob, a man whose job it is to drive very quickly and teach others how to do the same. Behind is Kim – leant forwards, his hand hovers over a big, scary-looking red button with the word “KILL” on it, which he’s gaffer-taped to the centre armrest. He looks nervous.

Just ahead of us, its brake lights glowing reassuringly, is a 2011 Nissan GT-R. Unmodified, save for the spectacular array of equipment in its boot and cabin that allows me, someone sat metres away in a completely different car, to drive it with nothing but the PlayStation controller in my hands. I’m told I could be up to a kilometre away, and it would still work perfectly.

This is, of course, the GT-R/C – a 2011 GT-R that’s been converted at Nissan’s behest into a life-size, 542bhp, 196mph remote-controlled car by a company called JLB Design, and last month driven by 2011 GT Academy-winner Jann Mardenborough at vast speed around Silverstone’s National Circuit. From a helicopter. We were there.

“Before I got into it I wasn’t so keen on the chopper,” he says, “because it killed my hero – Colin McRae. I wasn’t as confident jumping in it.” But the chopper, a tiny Robinson R44 Raven II, was a necessary evil. “I drove the car from another car behind, and that was more difficult because the car I was in couldn’t keep up… In the chopper you could see a lot more of the circuit, a lot more in front of you.”

Jann set a time of 1m 17.47s around Silverstone’s National Circuit, hitting 131mph and averaging 76mph. “When we did GT Academy on the National Circuit they used 370Zs. OK it’s a slower car, but the finalists were doing about 1:17s, and I just did a 1:17 from the helicopter.” 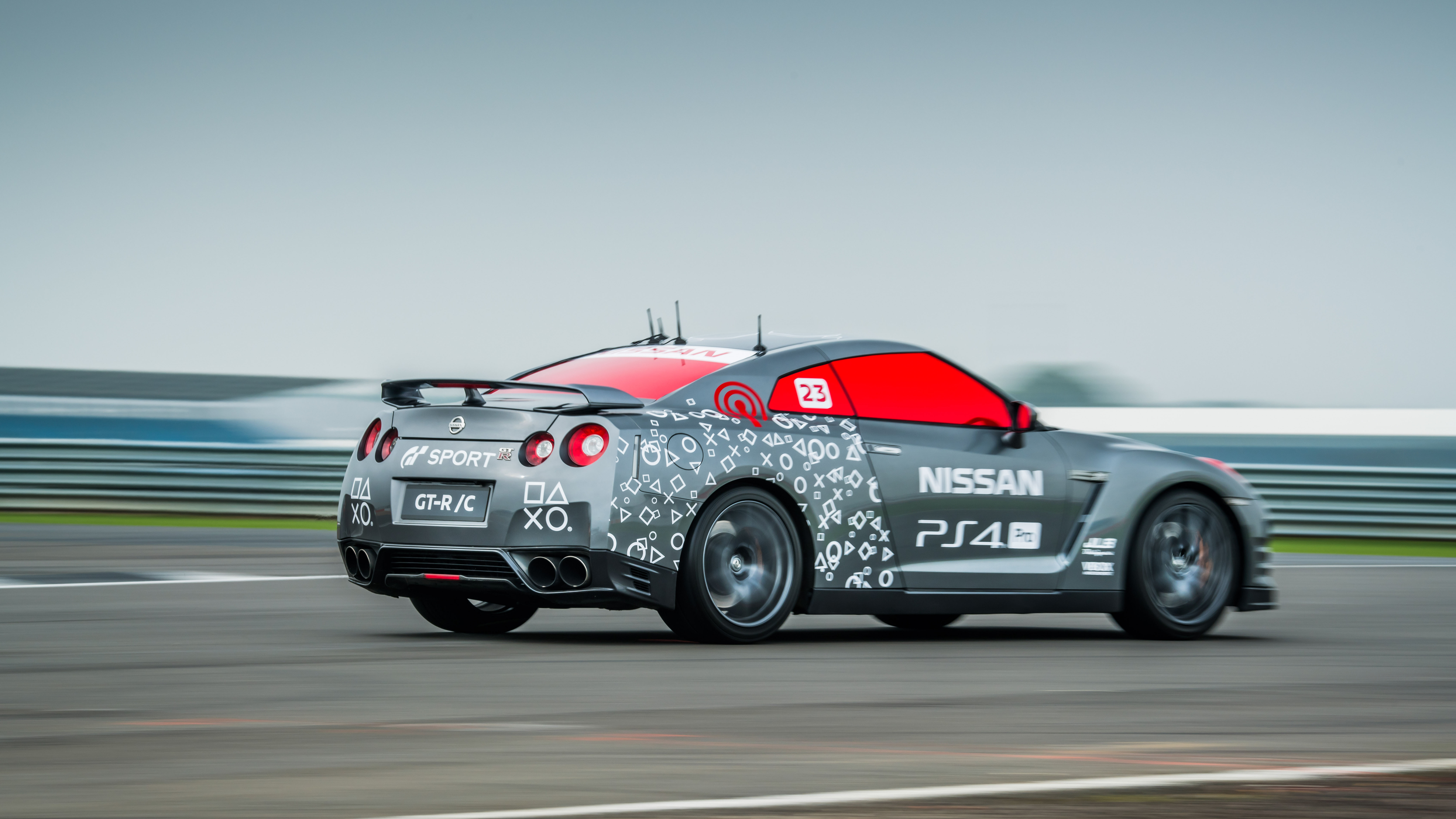 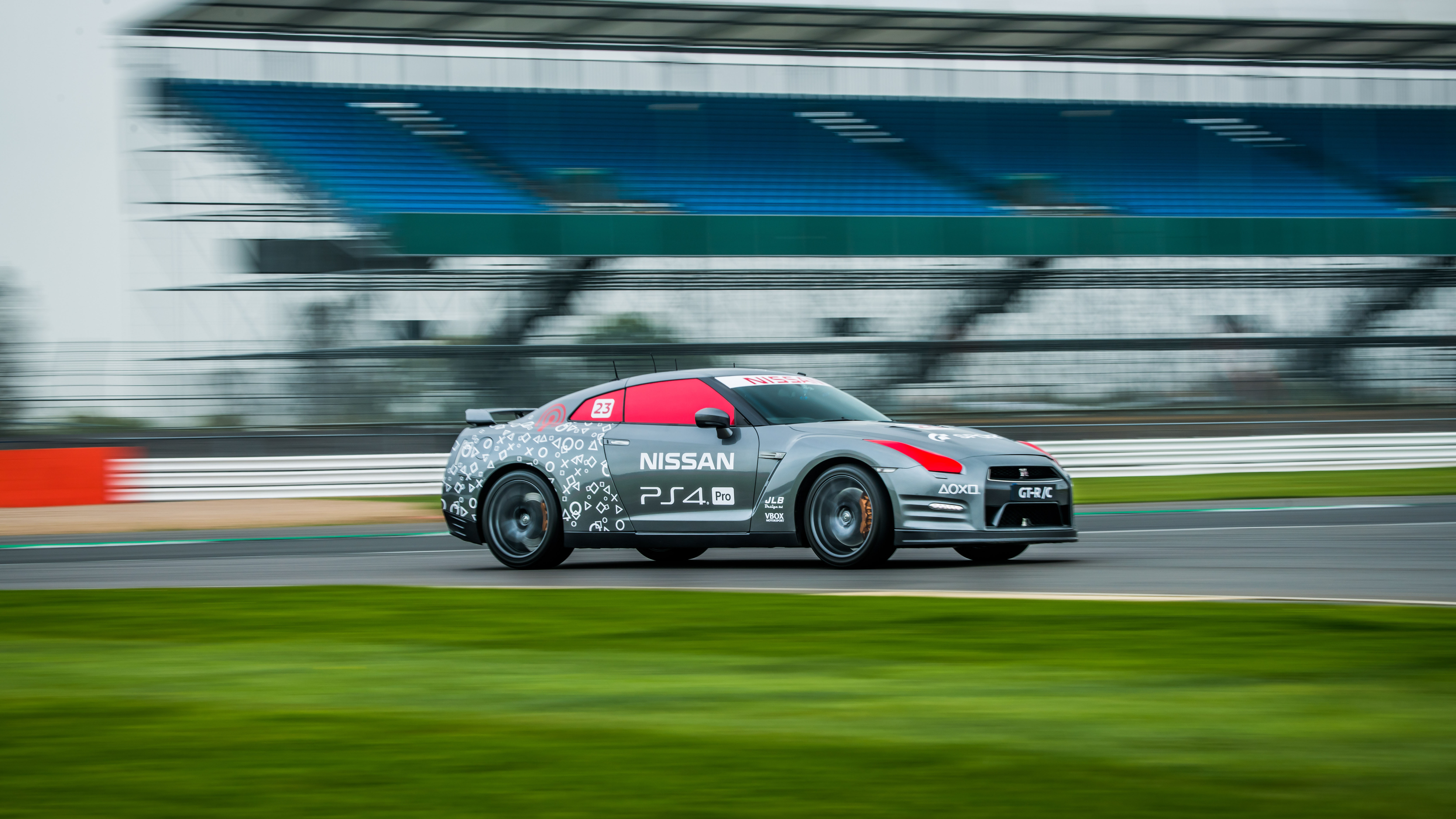 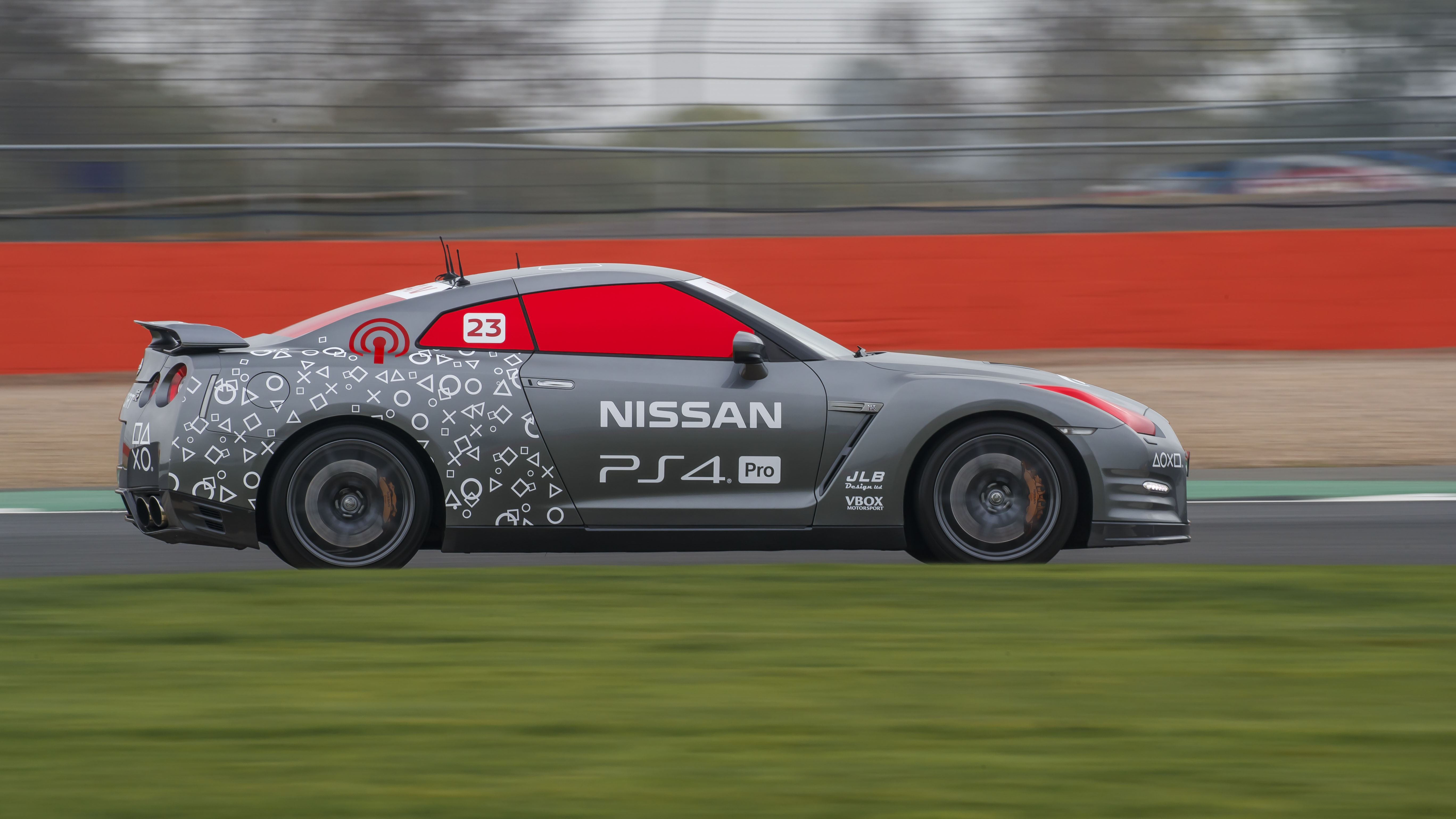 And now, two weeks after Jann’s probably record-breaking run, it’s my turn. The Qashqai is my chopper, and a tiny corner of Stowe my National. No chopper required or indeed offered, because we have much less space than Jann did and you know – budget.

Just like Jann, I have a Dualshock 4, a speed readout, a man with a kill switch very close by and no live video feed. Unlike Jann, I have at no point in my life won an international video-gaming competition or competed in a real-life race (not counting the TG300, obviously).

The GT-R is already running, but I’m not in control. So I hold the left trigger (brakes) and push the ‘PS’ button on the controller. The light-bar flashes green. The directional buttons are mapped to drive and reverse, so I hit up for forwards and slowly release the brake. The brake lights go out but nothing happens, so I tentatively squeeze the right trigger until the GT-R starts to pull away. Rob follows in the Qashqai.

Now rolling at 20mph or so I encounter a long, left-hand bend with small cones on its inside and a solid-looking tyre-wall outside. The GT-R’s steering is exponential, this means it’s quite sensitive about the straight-ahead so at first you end up cornering like you’ve got full lock or nowt and nothing in between – 50p-ing your way around every bend (non-UK readers, Google ‘50 pence piece’). You get used to it though. 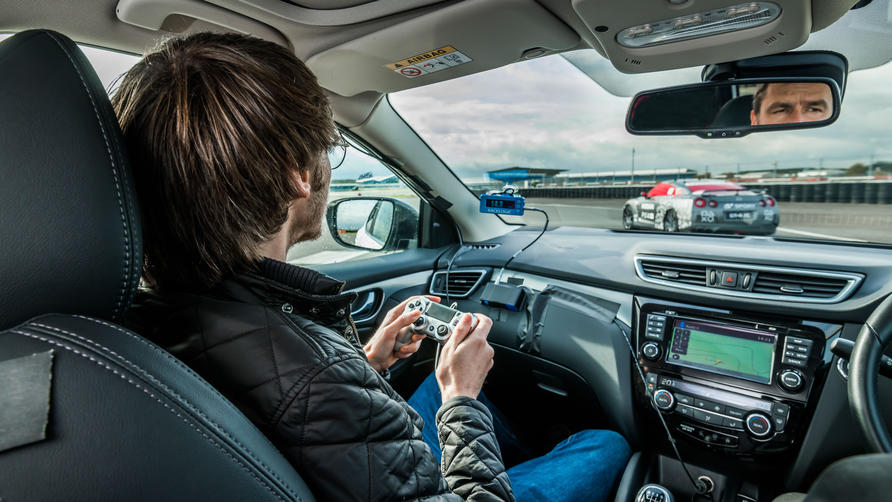 The brakes are trickier. Jann did warn us about this. “In reality it’s on or off,” he says. “When you’re pushing on you need to brake into the corner… the ESP has saved me going into Copse and Luffield.” We are not going fast enough to trouble the ESP – I get up to about 50mph in the end, and that’s plenty fast enough – but Qashqai-driver Rob needs to be on his toes. GT-Rs have better brakes than Qashqais, and I’m finding it hard to scrub-off speed without effectively panic-braking down to a crawl. But you get used to that too. And the throttle, which is much easier to modulate.

On a nearby hillock is Dr. James Brighton, second kill-switch in hand. As boss of JLB, he’s been building life-sized, remote-control cars for years. “We’ve done a few, I can’t remember how many,” he says “but they’re only ever done once, and that’s it. And every single one is different.” The GT-R/C represents many firsts – first ‘supercar’, first time controlling one from a heli, first time using a PlayStation controller as the remote. He’s built loads for telly shows, including the one for which this website is named, and various companies. For example, for Mitsubishi JLB created an ASX anyone visiting its US website could drive with their keyboard.

When you’re building a life-size R/C car the “first thing you need to do is establish how the car behaves to particular control inputs,” says the Doctor. “You don’t get in a Nissan Leaf and have exactly the same sensory experience as you do with a GT-R… so once you’ve established how the vehicle performs, then we design the system to suit that application.” So with the steering, they’ve only engineered in a certain amount of lock – as much as is required and no more. We have more than Jann did because our track is tighter. 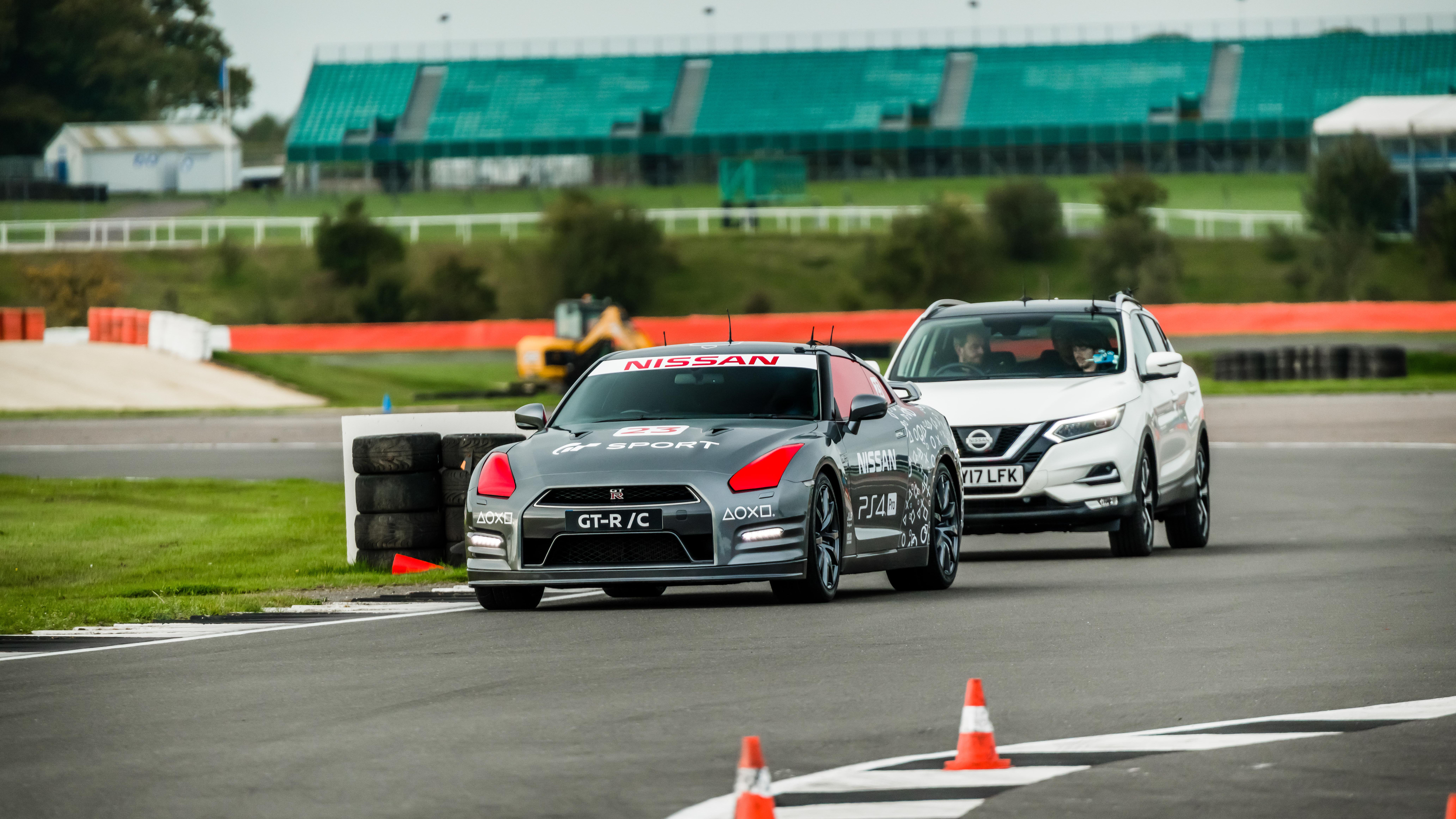 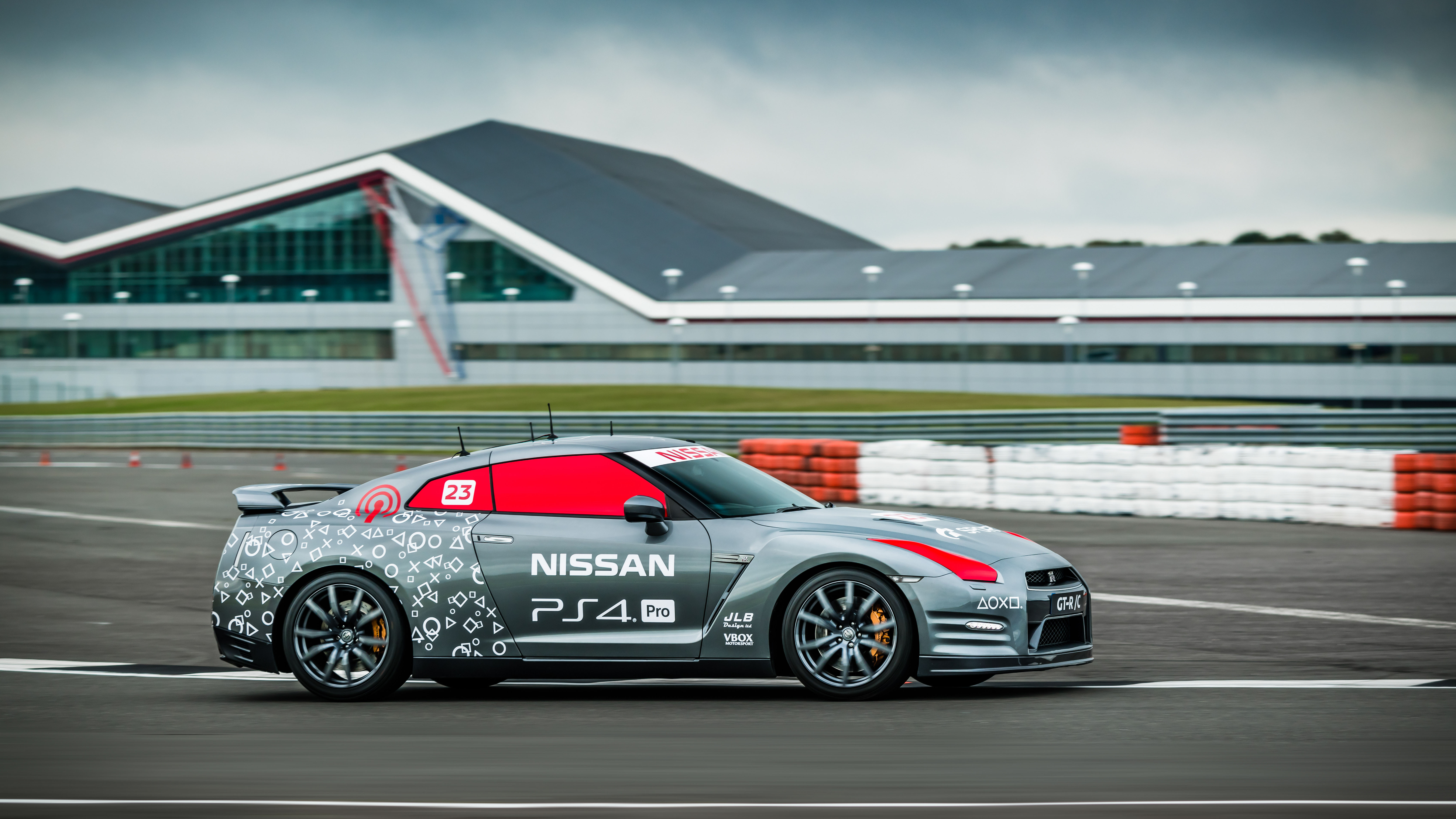 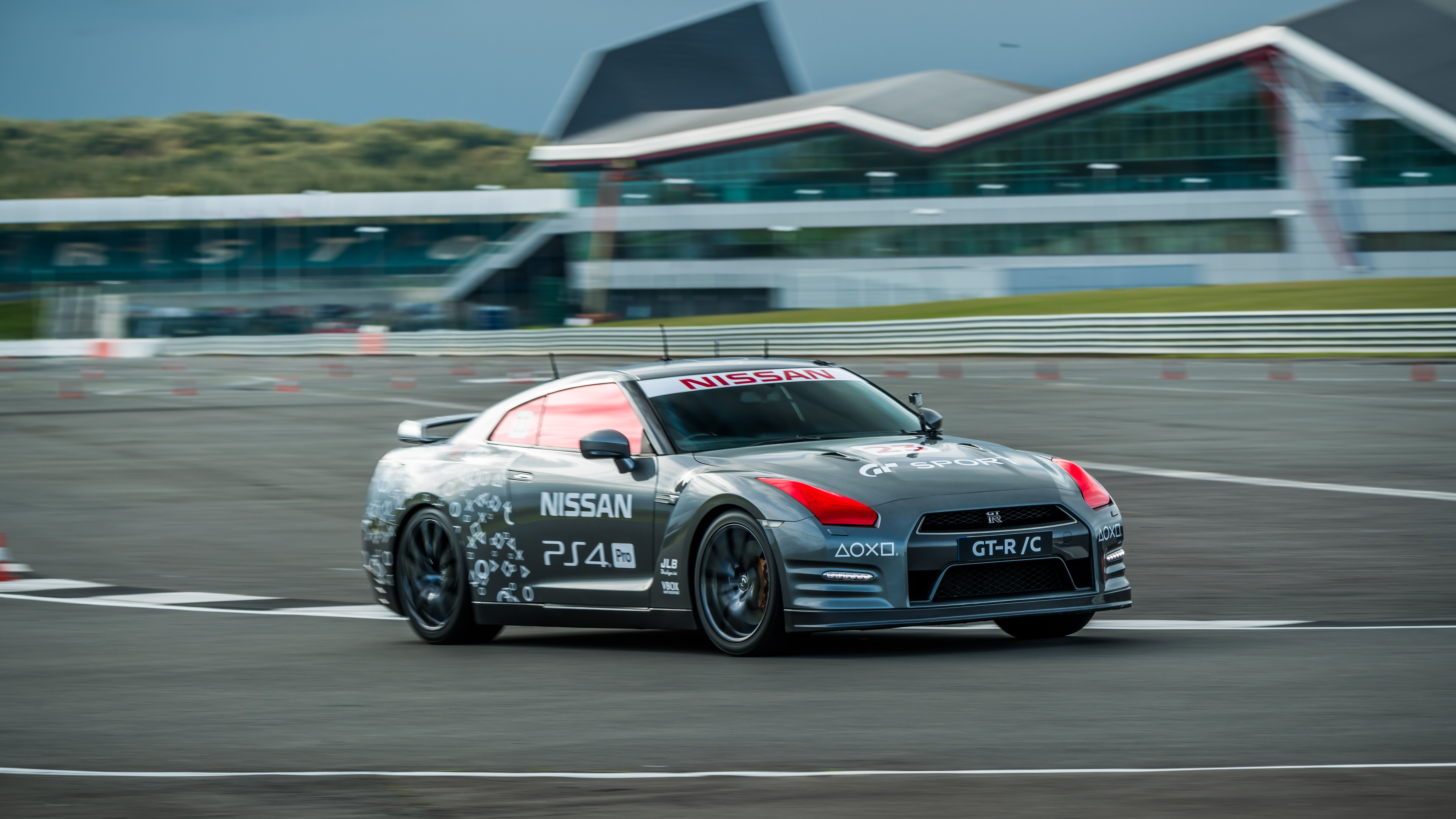 The Doctor continues. “The absolutely key thing to remember is that the driver can only see the car. Imagine sitting in your car driving home tonight – you feel the G Force, you feel the torque on the steering wheel, you’re looking around seeing everything. You have an ideal POV. Our driver has one, only sight.”

Which is my excuse when I hit a cone. Deliberately, obviously. I’m testing it, just to see whether all the modifications have in any way affected the GT-R’s structural integrity. There are four systems in there that operate the steering, brakes, accelerator and transmission. These are powered by two energy sources, electricity and compressed air (hence the tank in the boot). Six computers mounted in the boot make adjustments 100 times per second, and there are many, many failsafes so if something does go wrong – mechanically, or if I inadvertently pilot it into a wall – the car will always stop.

“It’s not the simplest build we’ve ever done, but it’s not quite as bad as… well no, it can be every bit as bad as you think,” says the Doctor. “The car is very complex, and there are a lot of ECUs doing different things, and each of then rely on the status of the others.” 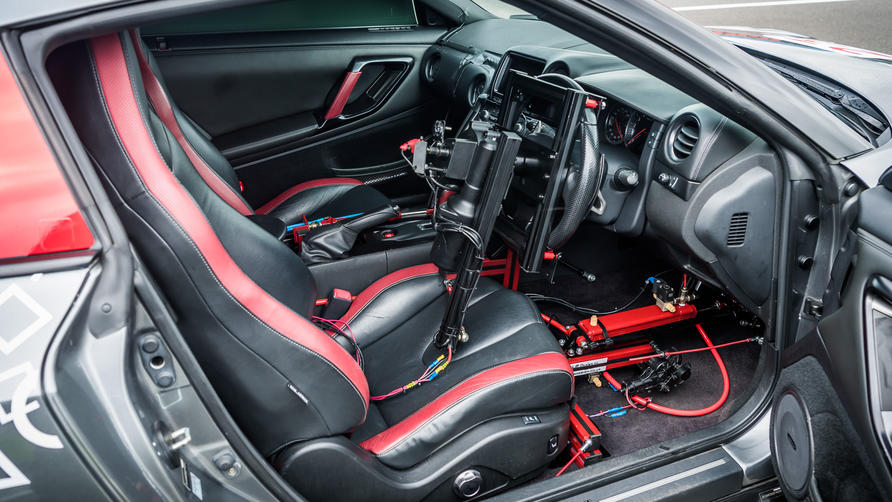 I thus wonder if the parking sensors are bleeping to themselves, as I struggle to ‘park’ the R/C in a space large enough for three side-by-side, or whether they’ve been knocked out by removing a completely unrelated fuse.

And there ends my drive. Bring it to a stop and push the ‘PS’ button again and the car goes to sleep. I hand the controller back to my relieved looking minders, ready for the next ham-fisted journalist to have a go, and get out of the car.

Turns out controlling something so massive, from something that’s also moving, isn’t as easy as Jann makes it look in the video. It messes with your sense of perspective, and while the control method is familiar, in video games you’re always in a fixed position. Your POV doesn’t move. But then again, the whole point of this exercise wasn’t to perfectly recreate the video-game driving experience in real life, it was to sell GT Sport. And it will, no doubt. The car, meanwhile, will be toured around “primary and secondary schools in the UK to promote future careers in STEM (Science, Technology, Engineering and Maths)”. I, meanwhile, am lobbying to get it on next year’s PCOTY. 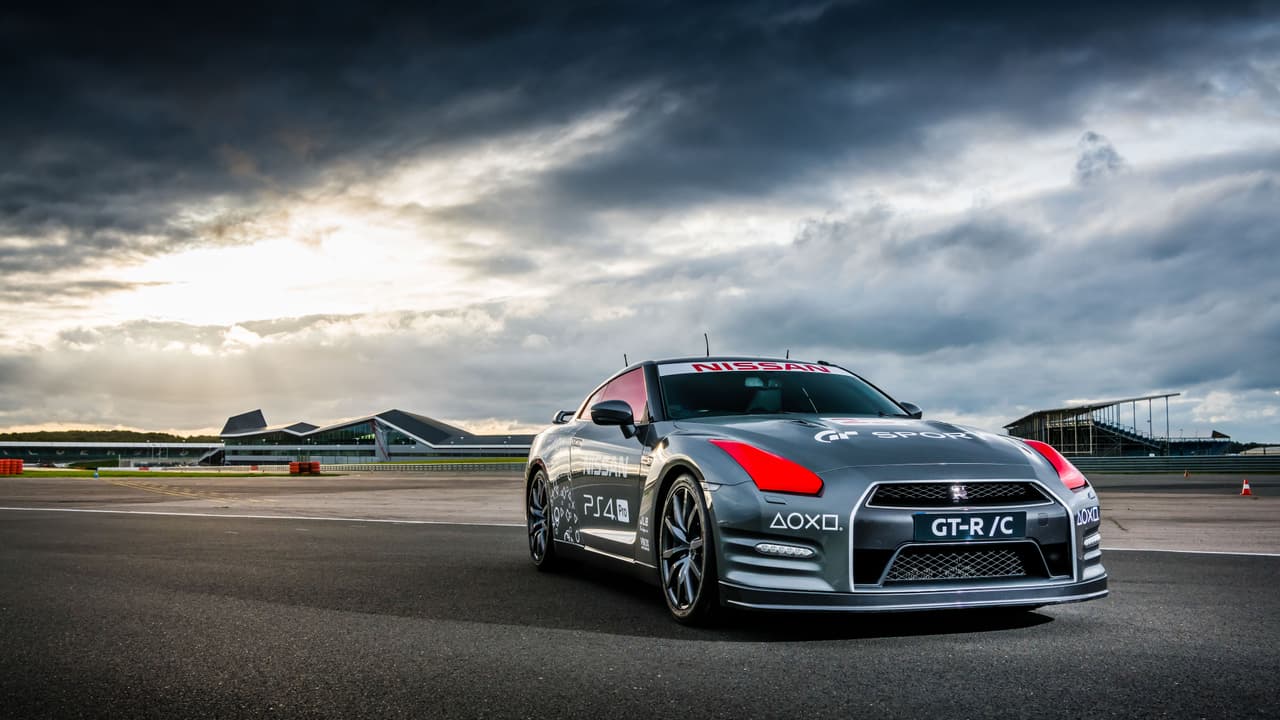