How much 'lifestyle' can you squeeze into a Ford Puma? | Top Gear
Advertisement
Best of 2021

How much 'lifestyle' can you squeeze into a Ford Puma?

A day with Ford's lifestyle crossover should do it

My kayak is very slowly deflating. I’m not sure whether that’s because I accidentally poked it with a chainsaw this morning while loading the car, because I’ve just stabbed it with my fishing rod, or possibly because it’s been lashed to the roof of a Ford Puma for the past four hours with too-tight ratchet straps (something you really should not do with an inflatable watercraft, I have subsequently discovered). Obviously this wouldn’t be a problem, except that I’m currently in the middle of a lake, I’ve managed to untwist my budget collapsible paddle into two stumpy oars and I am... not light. But that’s what you get for buying your adventure kit off the internet with the filter set to ‘lowest possible price’. I have to get to shore, simply because I have a date with a climbing wall at 10am, an exercise class immediately after, and the intellectual weight of Emmanuel Kant to plough through before lunch.

Still, nice day for it.

An explanation as to why we’re currently doing a rubbery, Happy Shopper impression of the Titanic on a small lake in Lincolnshire is probably necessary. And it goes a little something like this: if the Ford Puma is a genuinely popular car – the fifth bestselling car in the UK in 2021 with 20,853 registrations (as of Aug), according to the SMMT, and the bestselling small crossover of all – then what is it that makes it so appealing?

To figure it out, you need to ask yourself the basic question: what are the key factors that make a car popular? A tough to define set of parameters that no doubt gets bounced around product planning meetings the world over, with out of the box, blue sky thinking intent boiled down to far more simple execution. Popular cars don’t attempt to change the game, they just aim to play it well. And so you’re left with less sexy mission statements, but far more focus on things like reliability, price, practicality, broad-spectrum appeal and fitness for purpose. Mix up a cocktail of those ingredients and you’re well on your way to sales chart success. Probably. 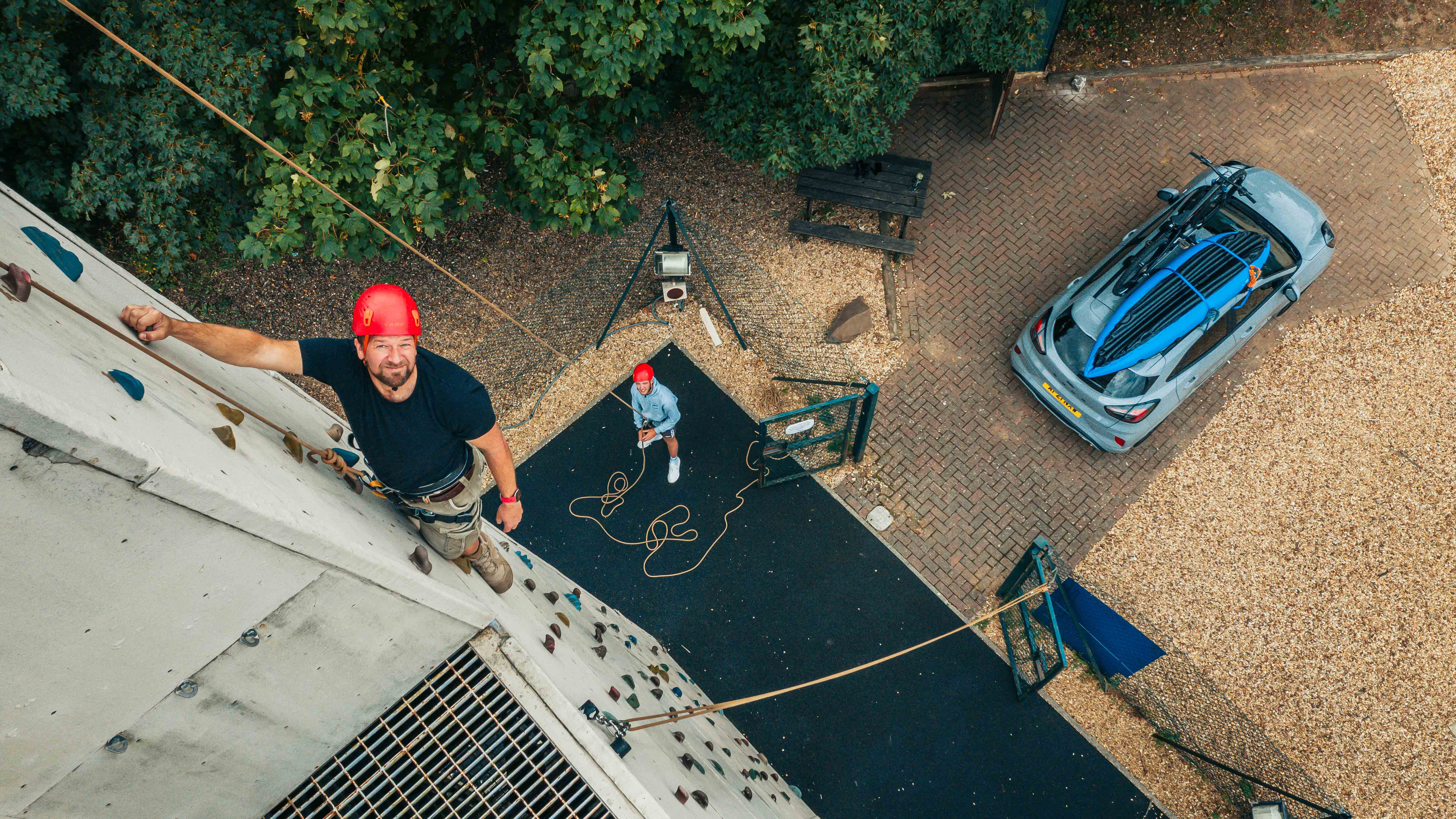 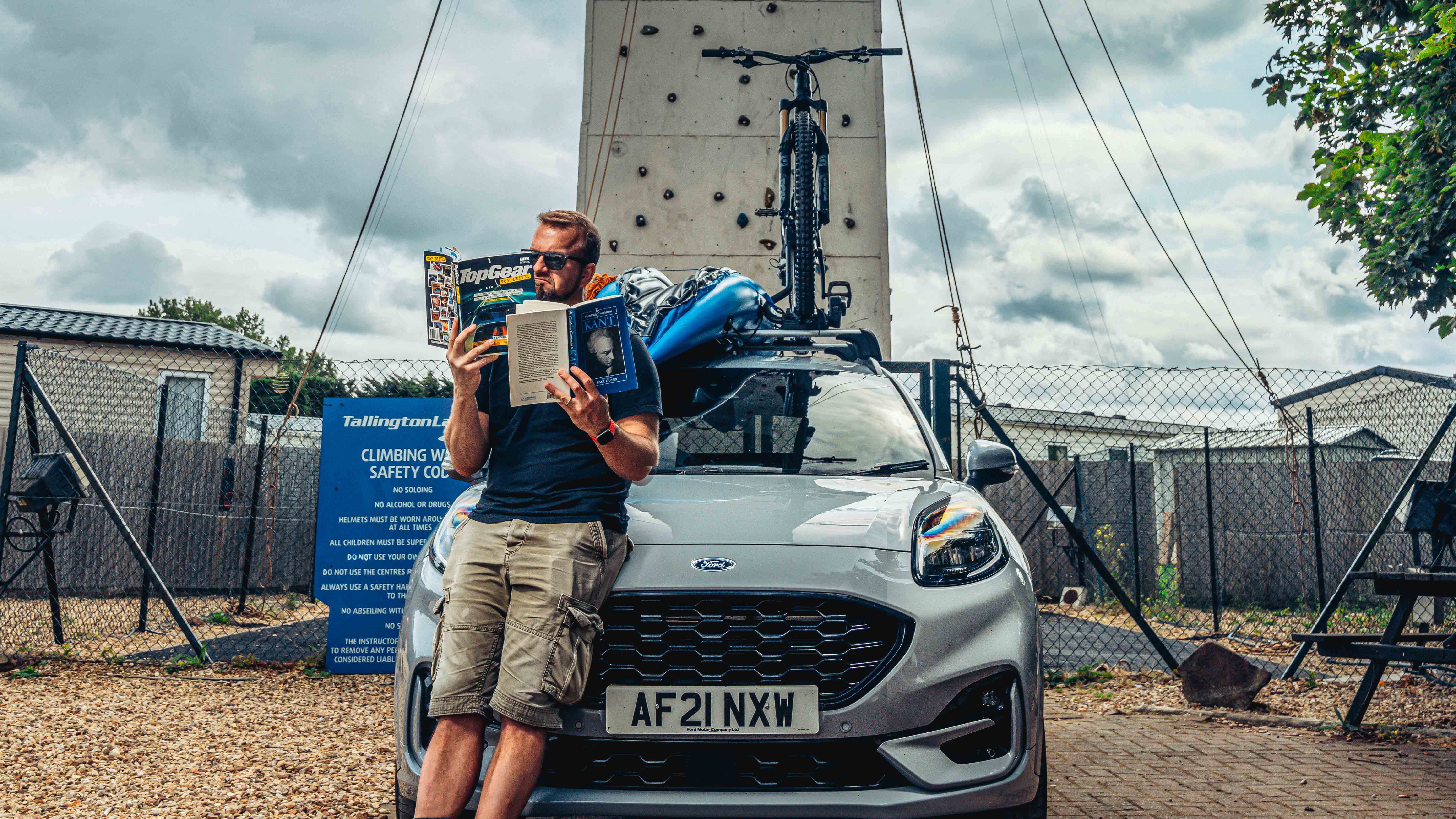 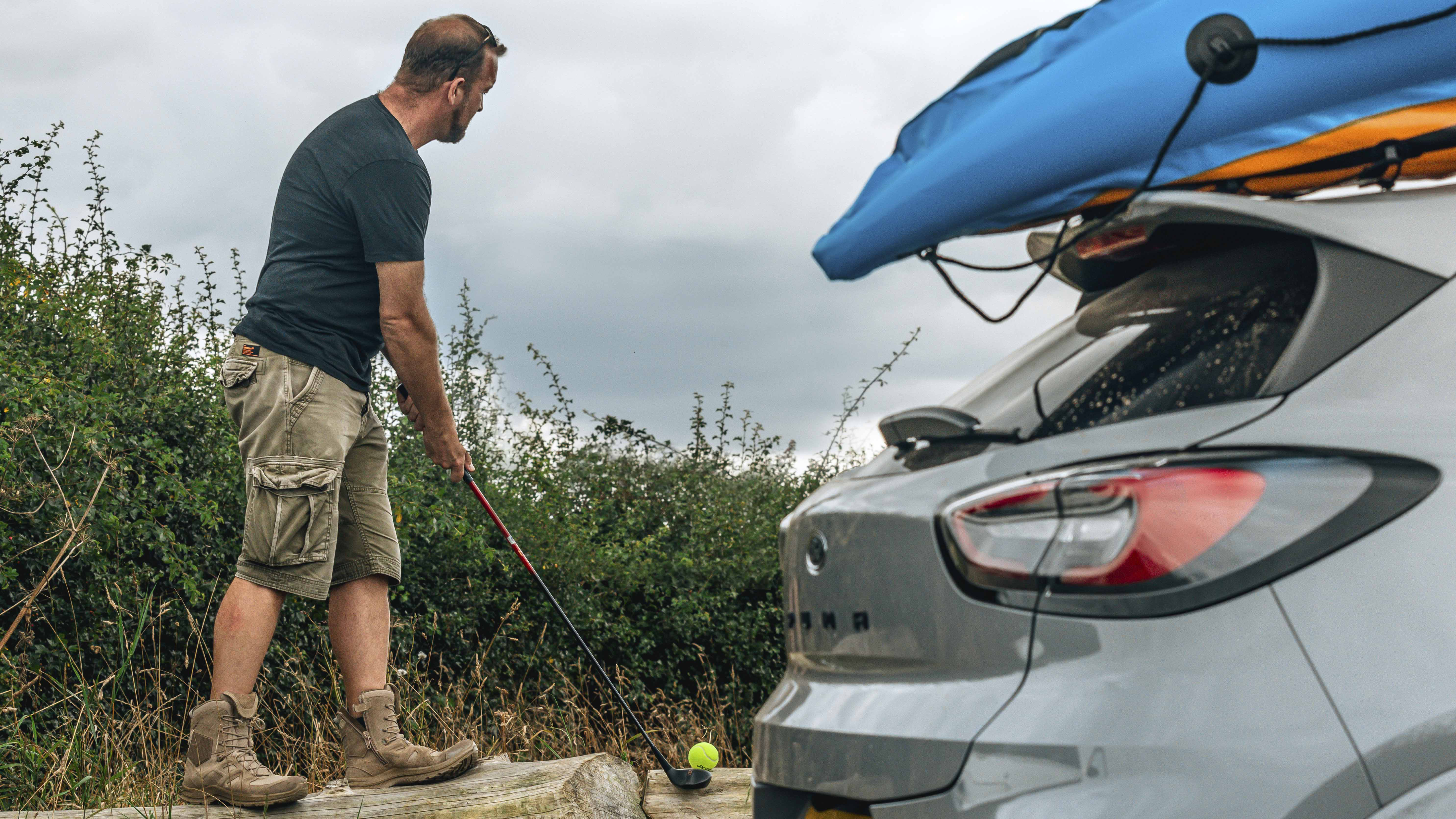 And yes, the relatively humble Ford Puma works on lots of levels. Big Company backup and choice, in a package that’s in the Goldilocks moment of not-too-big and not-too-small. It’s an SUV-lite without the brash; decent to drive, economical and useful. It covers a lot of bases. And yet, how many bases can a Ford Puma actually cover? In true Top Gear fashion, we decided to find out, using a chainsaw, a kayak, a £6.5k carbon-fibre mountain bike and a sewing kit as well as myriad other hobby-based props. Because we’re going to attempt to complete as many of the UK’s most popular hobbies as possible in a day. From a humble Puma.

A quick jaunt to Tallington Lakes just outside Stamford in Lincolnshire allowed for a first brief but informative assessment of the Puma’s handling characteristics, albeit with a full roof rack and slightly flappy kayak bouncing merrily on the windscreen. And it’s good. This is a talented chassis even in basic format and with only 123bhp to play with. There’s something gently satisfying in the way it stays straight and level, and ekes out whatever grip is available – Ford’s chassis engineers having paid proper attention to damping and control. A quick paddle around on the lake, a few desultory casts of my £12.99 fishing rod (no fish), and we’re on to the next one.

Another one of the UK’s most favoured pastimes, which encompasses a bewildering array of delicate appliqué and bedazzling. I plumped for rock painting, which requires very little explanation, and yet is bizarrely engrossing. About 45 minutes and three joyously graffitied rocks later and photographer Riccioni had to drag me away so that I could go...

To be fair, having strapped the bike and kayak to the roof and stowed the rest of the kit in the car with the seats down, the Puma swallowed everything without breaking a sweat. That’s 456 litres of hobby space seats up, some 1,200 seats down, though if you option the ‘Megabox’ stowage compartment under the boot floor, you can stand a set of golf clubs up in the back. Which is nice. The camping came up during the complex packing Jenga because it started to rain, and we took refuge in the tent. In a car park. Not that it looked dodgy.

One of the UK’s top hobbies, apparently, so tried twin-paging an old Top Gear adventure drives book and Kant’s Critique of Pure Reason at the same time. Ended up mostly looking at the pictures in the Top Gear book, if I’m honest.

So cards on the table, this was my favourite hobby of the day. If you’ve got the £200 optional roof bars fitted, a Thule ProRide bike holder for just over £100 will handle pretty much any bike. It’ll need to be relatively light, mind, seeing as you have to lift it onto the roof to secure it. Not a problem in this case, seeing as we managed to get hold of an absolutely gorgeous Canyon Spectral 29 LTD trailbike. With a carbon frame, it only weighs just over 13kg, and the ‘Triple Phase’ rear fully adjustable suspension looks suspiciously like a four-link to me. Couple that with Fox Racing shocks, and you’ve basically got the Trophy Truck of mountain bikes. Which is pertinent to my interests. It’s got a pneumatic seatpost which can be adjusted for height on the fly and a gearset that looks like the innards of a Swiss watch. But the best bit? I never realised how much difference a really good bike makes to ease of use. Off-road humps and bumps? You can style them out every time, and keep up with a badly driven Ford Puma on a farm track. In fact, the only fly in the ointment is that it lists at £6,499… 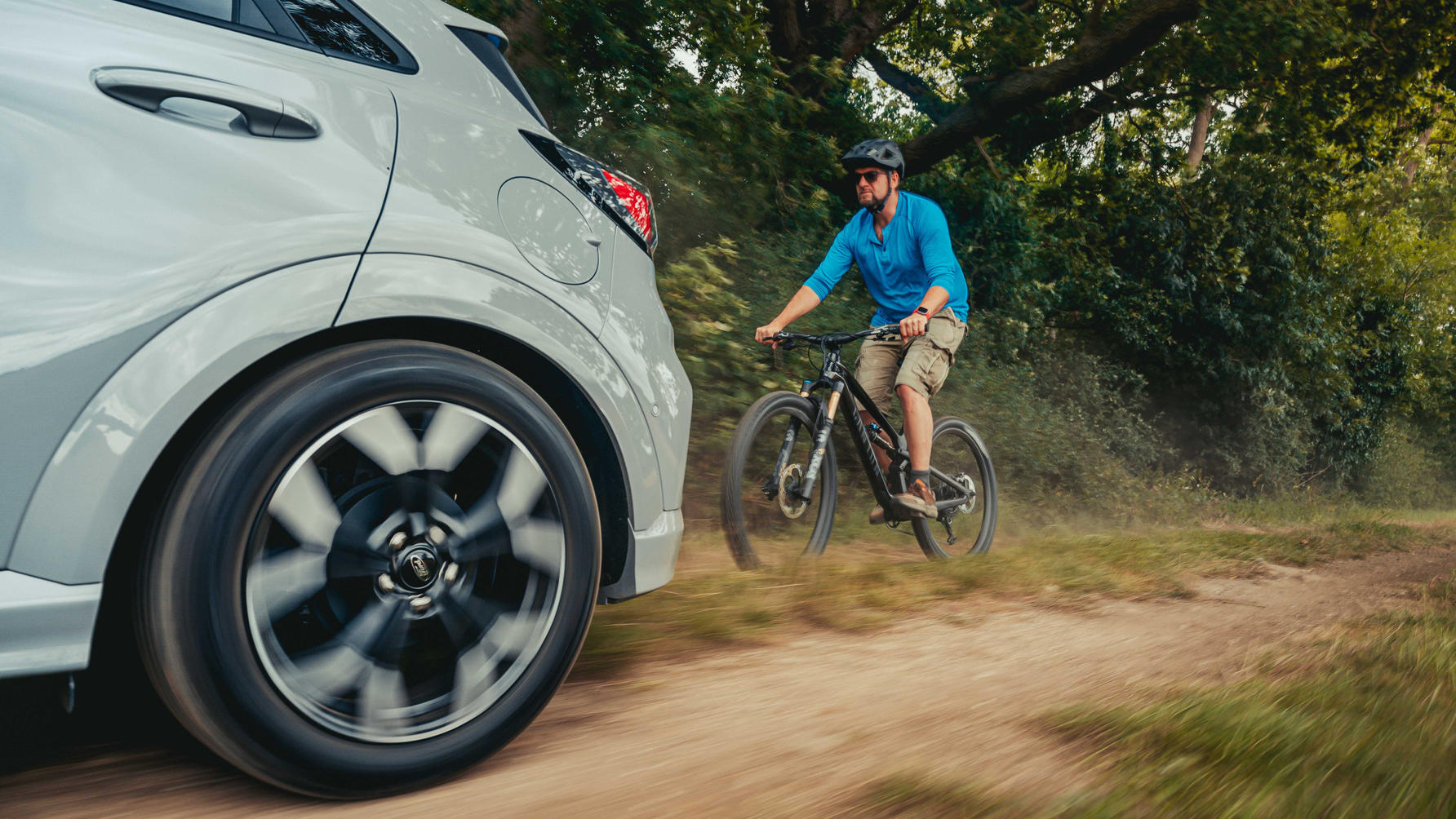 Having ascended to my ‘hide’ to look for some sort of rare tit, it became apparent that the Puma as viewed from above is actually a pretty compact little thing. Even though it is 54mm taller, 71mm wider and has a 95mm longer wheelbase than the current Fiesta, it’s easy to park and deal with in car parks. Looks good in the optional £750 ‘Grey Matter’ paint too.

A sort of combined application here, for two of the most popular hobbies. Unfortunately, I couldn’t stream to the Puma’s workmanlike but useful 8in Sync 3 touchscreen, but the physical controls underneath did the job of keeping me cool as I failed to get to the Luigi’s Mansion level of Mario Kart.

Yes, the idea of the Megabox does also appeal if you like to have somewhere to store your sewing kit for on the go alterations or button rectification (the UK is really into sewing, knitting and crochet, who knew?), but I was actually more drawn to the idea of filling it with ice and...

Although not technically a ‘hobby’, having somewhere waterproof to store some ice and a non-driving alcoholic beverage at the end of the day is worth its weight in gold. Just don’t attempt sewing in a busy supermarket car park, because people think you’re weird.

Coverage at the recent Olympics has seen a surge in interest in climbing, so it seemed pertinent to at least attempt to haul my sorry carcass up the beginner’s wall. I feel I would have been better at this discipline if the photographer hadn’t been trying to fly a drone into my head 30ft off the floor while I was clinging to a wall-nubbin the size and shape of a kidney bean.

The back seats of a Puma are relatively broad for this size of car, making it a useful five-seater capable of covering off most families’ needs. It also makes it able to accommodate a small weights bar and dumb-bell set in the footwells, for a quick workout in a field. Access to which was down a light farm track which highlighted the usefulness of the Puma’s slightly raised ride height. At 160mm it’s some 25mm further off the ground than a Fiesta, which means no graunching if you have a sloping driveway, but the taller, longer and wider cabin also makes it feel much bigger. It’s also got a usefully higher seating position, which helps when you’ve just popped a hip out doing some sort of newly invented barley yoga.

Being a more practical/industrial chef (I maintain a viable line in bulk cuisine, largely breaded, all the same oven time), I tried frying an egg on the exhaust manifold. With the actual hot bit stuffed down the back of the engine, this took a long time. Egg smelled disturbingly of burnt hydrocarbons. 1/10. Would not recommend.

Something of a sore subject in the Ford household after the sink incident of 2019, I was banished to the garage to see if I could wire a light bar to the Puma’s roofrack. Which I could. Immediately lost both the 10mm and 13mm sockets to the alternate dimension in which these things live.

This is Top Gear. I used a chainsaw for pruning.

Muddy boots? You really need that Megabox. Those extra 80 litres plus drain holes underneath the tiered boot floor are genuinely useful for all sorts of things.

VERDICT: Which brings us to the conclusion of a very busy day of doing relaxing hobbies, and seeing if the Ford Puma actually deserves to be one of the UK’s top sellers. And it does. It might not be the most vital of cars in the lower reaches of the range, but it’s got all-rounder appeal that works for lots of people, for lots of the time. For real people, with real lives. This isn’t about a car with a specific mission statement, but an impressive breadth of ability that encompasses pretty much anything you can throw at it. And, as it turns out, you can throw quite a lot at a humble Ford Puma. 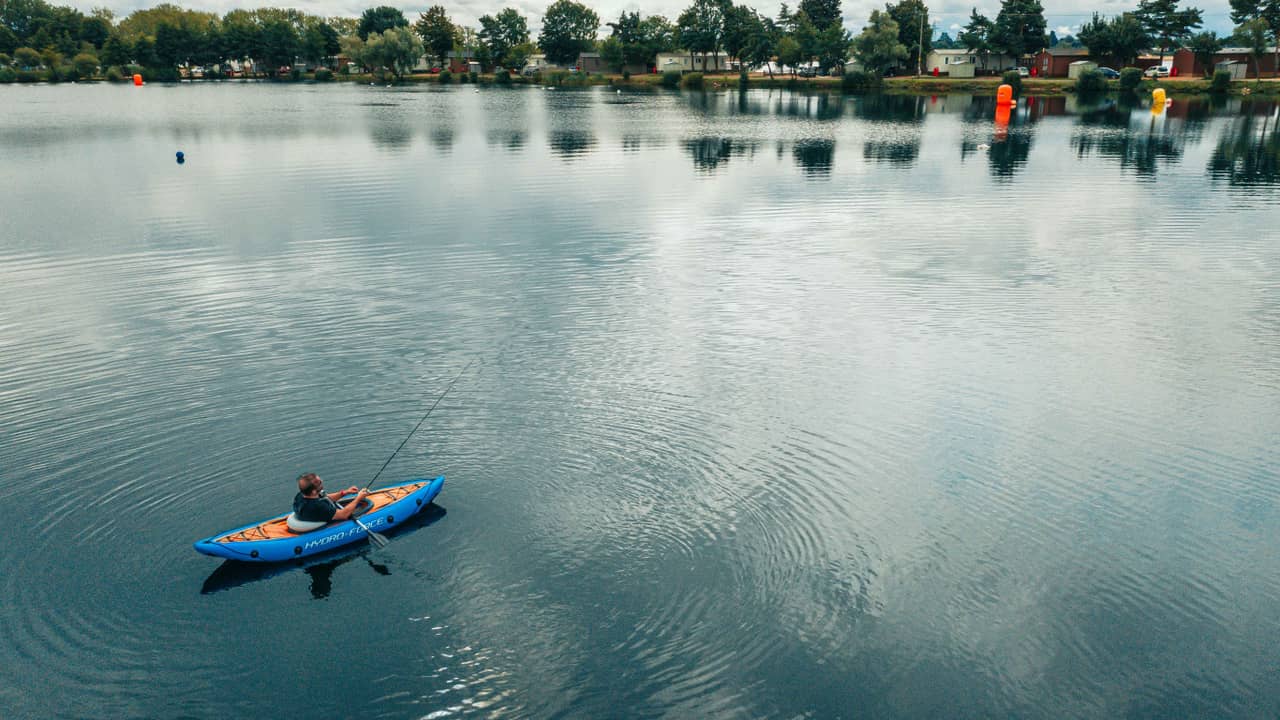