They look like stormtroopers, although the military analogy is misplaced. Endless ranks, tiers and rows of Toyotas, each and every one a gleaming, pristine white. But these, although tucked away in a secret underground bunker, are armed only with implacable reliability and fearsome durability.

That white Land Cruiser you saw on the news last night? Chances are it came through here. The back of shot cars seen in every report from war zones and aid programmes to disaster relief and third world development projects? At one time they probably called this home. Around 650 vehicles – more specifically 650 white Toyotas – leave here every month destined for global hotspots. Welcome to Toyota Gibraltar Stockholdings (TGS), the world’s most remarkable car dealership.

“We don’t really think of them as cars,” TGS co-chief executive Jonathan Gourlay tells me. “We’re just giving our customers a tool that does a job, whether that’s feeding children or delivering medicines.” You might think, like me, that the 70 Series Land Cruiser is utterly cool and want one very badly, but cool plays no role here – this is transport at its most fundamental. Simplicity, capability and reliability overrule everything. “If you look back 25 years, there were a few players in this market,” Gourlay continues. “There was Land Rover, there was Nissan and Mitsubishi, but gradually they’ve focused on building what I’d call ‘first world’ vehicles for Europe and North America. But Toyota still builds a 4.2-litre non-turbo diesel. You can’t register a new one in Europe because of its emissions, but it doesn’t go wrong and any mechanic can fix it in the field because there’s no electronics around it. You don’t need diagnostic tools, you just need to know how an engine works.” 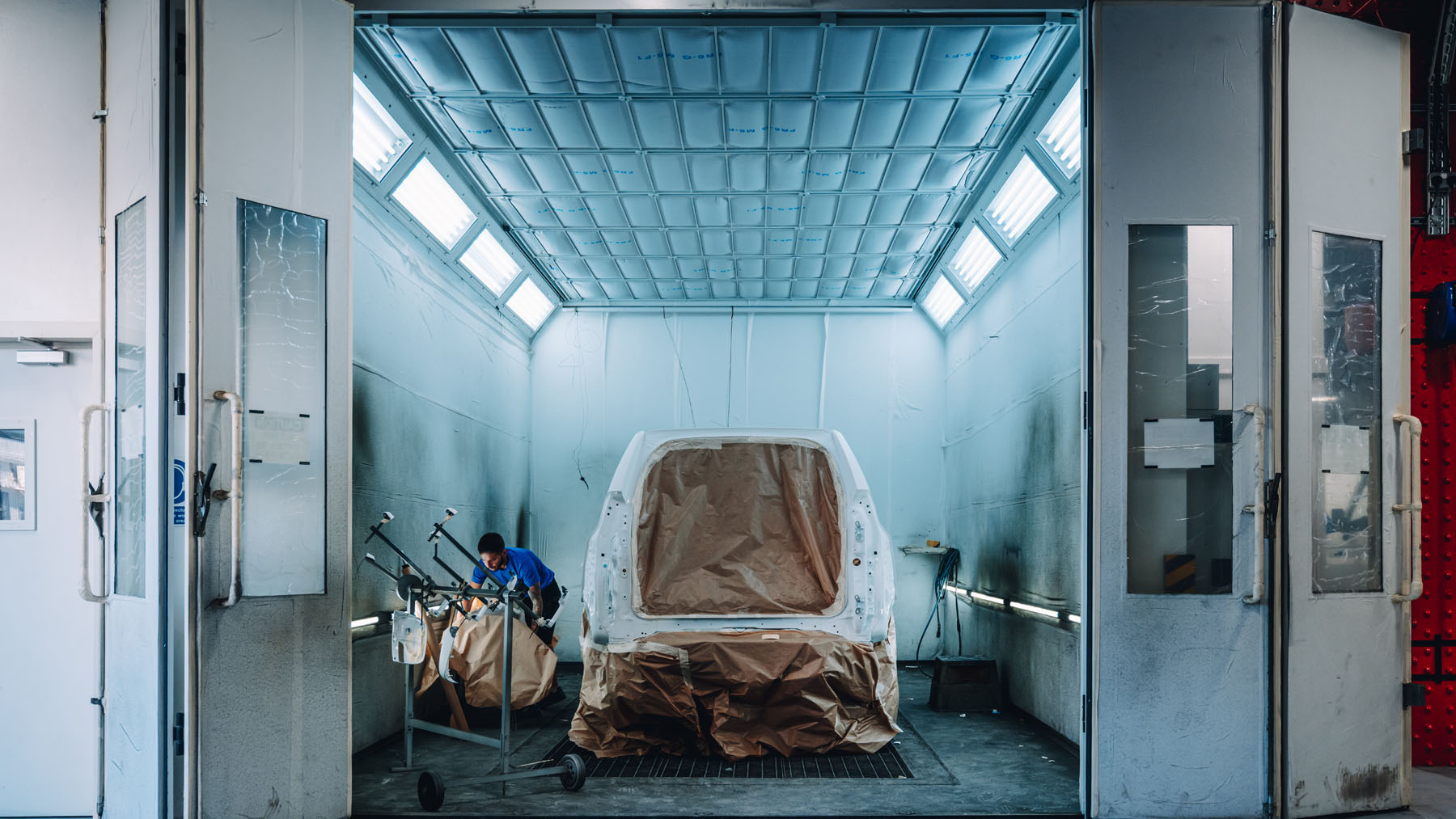 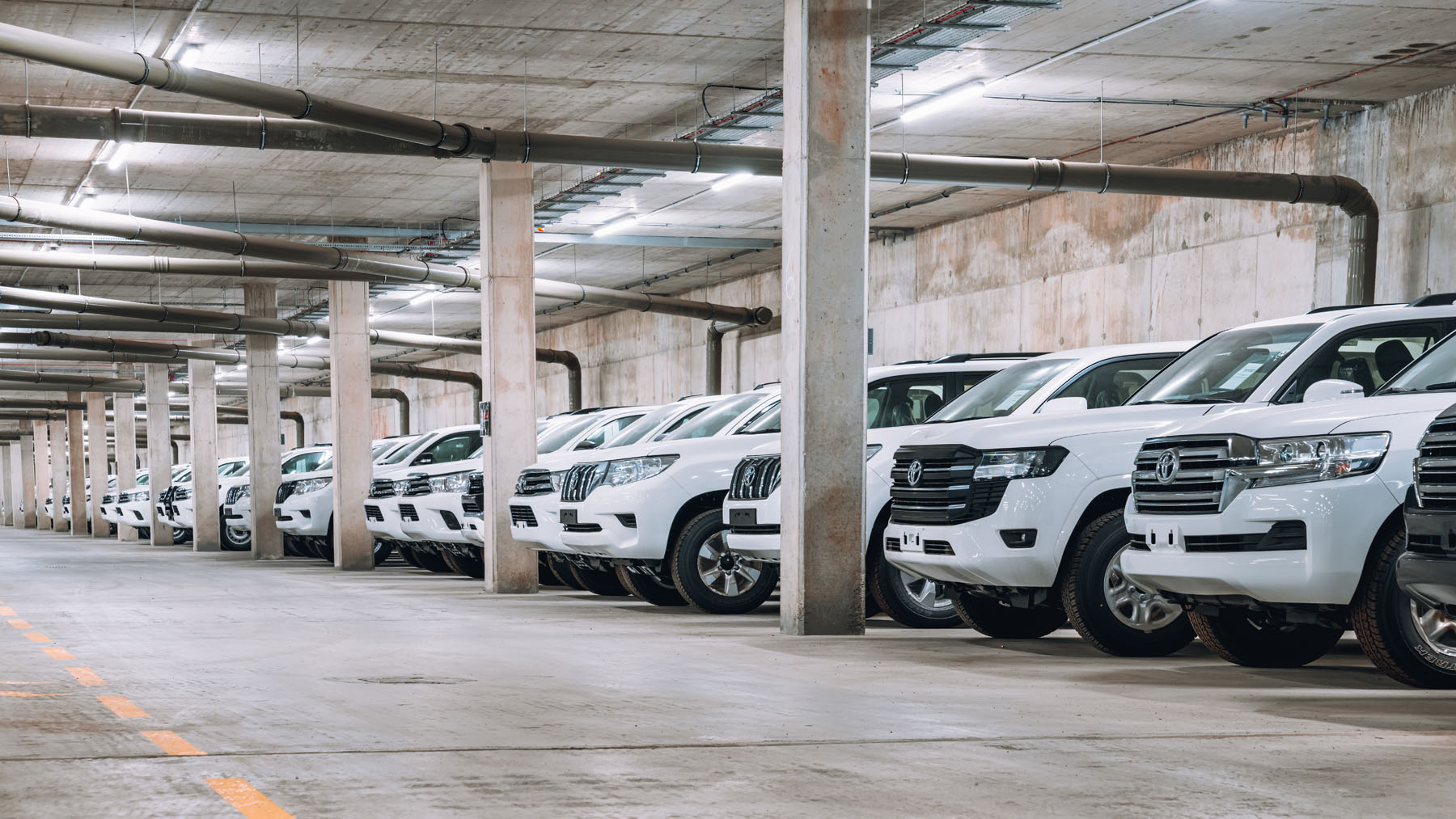 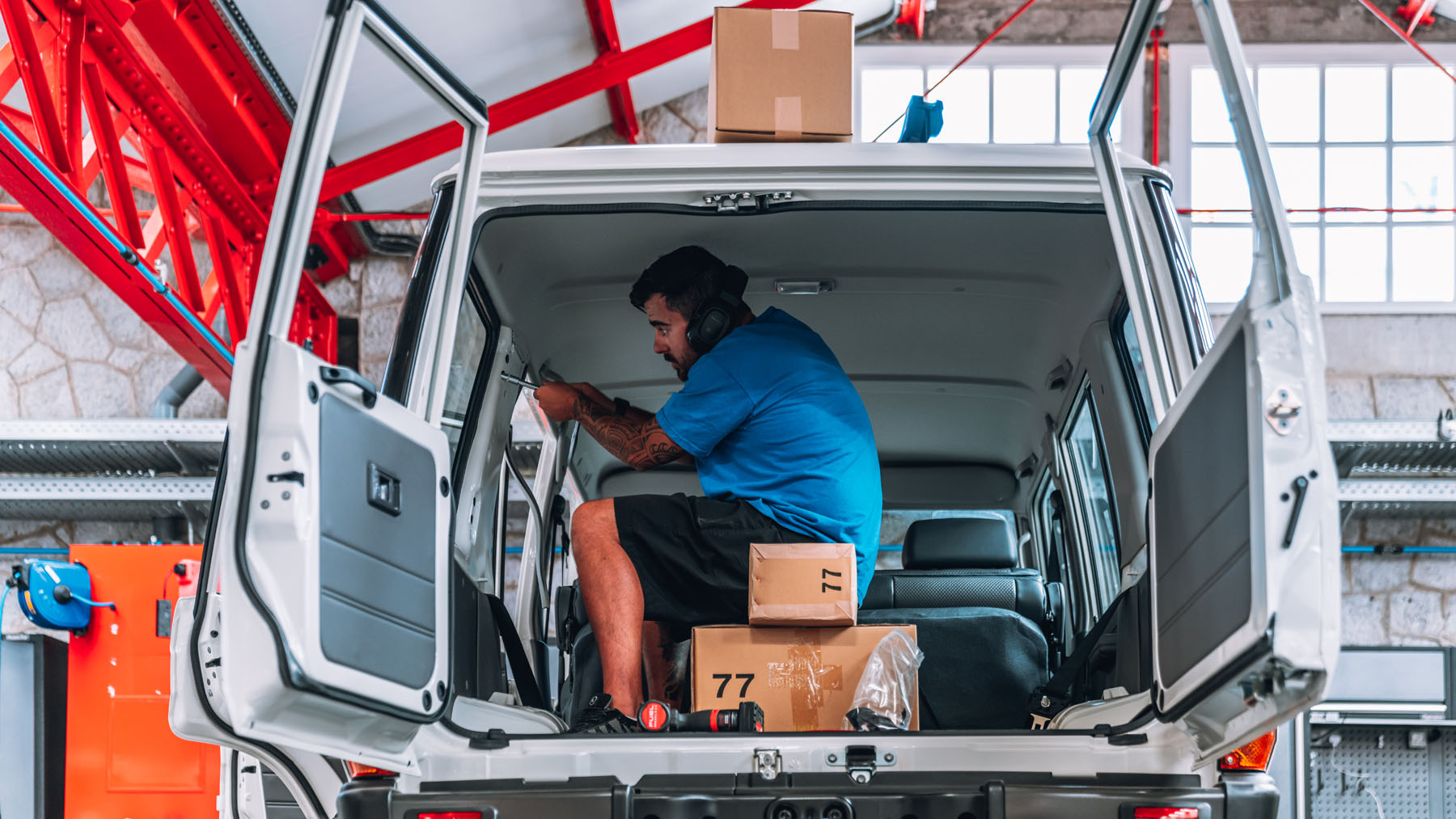 Economies of scale matter at every level of this story. Toyota can justify building simple, tough cars such as the 70 Series as long as a market exists (the UN alone doesn’t prop up this 40-year-old design – Australian outback farmers and African safari tours take their share). When others cleared out, it increased Toyota’s footprint. And it’s the same for Toyota Gib, as it’s fondly known. It’s been in this market for over 30 years, used to have rivals. But over time this one dealership at the mouth of the Mediterranean has come to dominate. This is where the UN, NGOs, international aid agencies and governments come to buy their vehicles.

Geography plays a part. Gibraltar is a good central distribution point. I assumed tax, er, efficiencies played a part too, but it’s not an offshore company. The vehicles travel from their factories on a T1 transit doc, which allows them to travel between bonded areas, with tax only paid when they reach their final destination. Toyota furnishes the UN and others with preferential pricing. 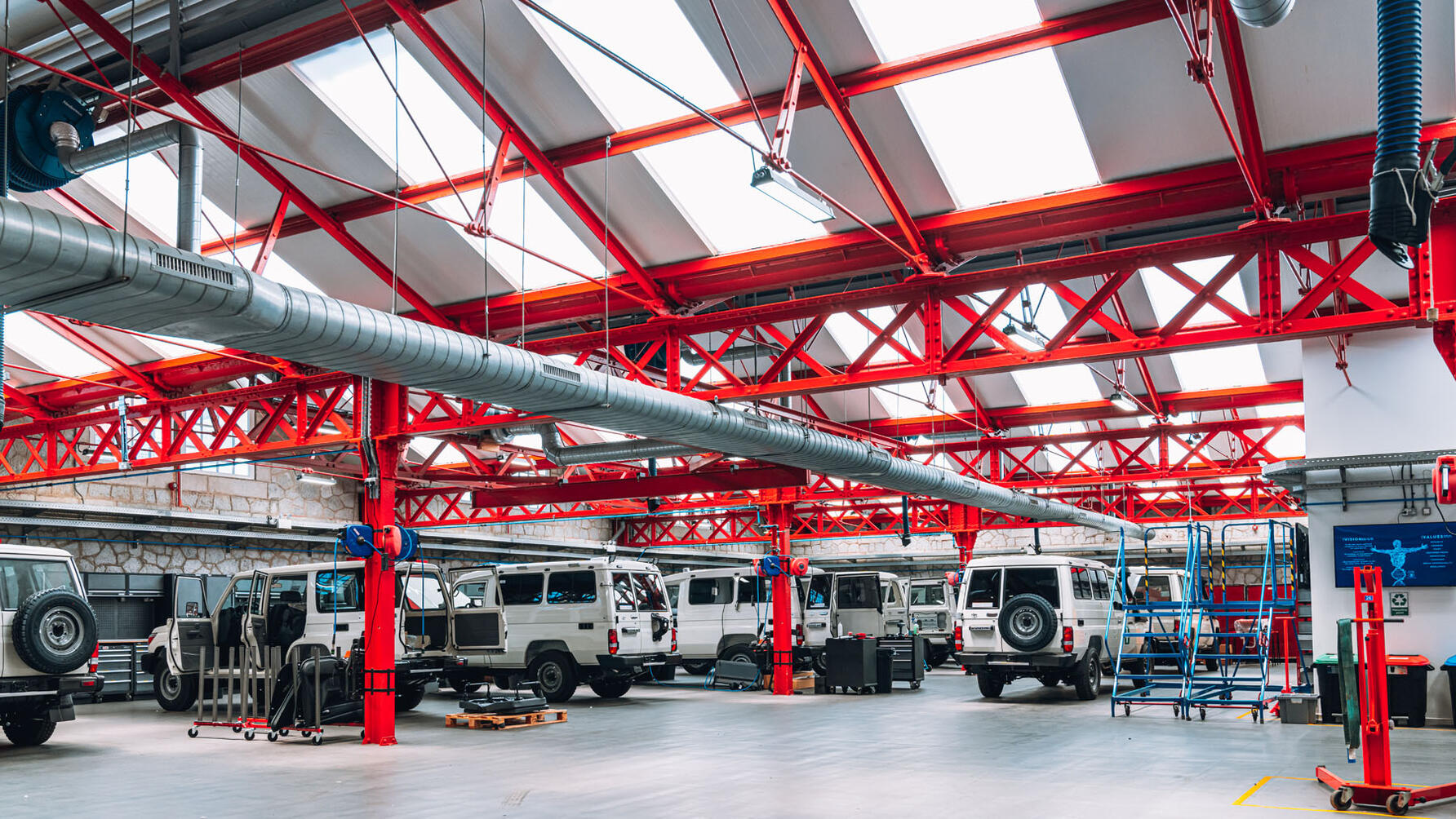 Why not ship them there direct from the factory? Because a basic Land Cruiser, Hilux or Hiace is rarely what’s needed – 90 per cent of the vehicles that pass through Gibraltar are modified. They arrive at the stormtrooper bunker, 1,000 kept there at a time, then are called down to the dockside warehouse to be kitted out. Each has to be driven due to Gibraltar’s claustrophobic road network. Then it’s bull bars, radios, winches, spares packages, tyres, upgrade kits. That’s the basic end. Upstairs 100 hours of work will turn a Hiace or Land Cruiser into a mobile library, working laboratory, prison van or fully functioning ambulance.

Those last were the first vehicles sent to Ukraine. “Some major organisations – Médecins Sans Frontières is a good example – will always go straight in [to conflict zones],” says Gourlay. “But even before they sent any requests we’d seen what was happening and spoken to Japan, which agreed to pull forward [70 Series] production for us.” Land Cruiser ambulances, rather than Hiace? “In war zones the roads and bridges are the first things to disappear, so it becomes progressively harder to move around. You need something that can cope with the territory. Three months into the conflict we’d already sent 300 vehicles there.”

Turnarounds can be quick. During the 2014 Ebola outbreak in Sierra Leone, Toyota Gib circumvented the normal channels and loaded cars directly from its docks onto RFA Argus, a Royal Navy support vessel. It’s not unknown for vehicles to be airlifted. The latest emergency scramble had been that morning. Transport for the Earl and Countess of Wessex on their jubilee tour of the British Overseas Territories. A Lexus was scrambled. “Bit of an unusual one that,” Gourlay tells me.

The day job is more prosaic, the vast majority shipped on ro-ro vessels, but the numbers and logistics are mind boggling. At any one time they track about 800 cars that could be headed to over 85 countries. Notifications, status updates, email alerts, tracking, delivery – it’s automotive Amazon for international aid. But much more than that. Toyota Gib’s knowledge and experience is second to none. They know what you need if you want an anti-poaching Hilux for Tanzania, a relief van for a disaster zone, a mine clearance pickup in the Middle East. But a firm line is drawn at anything that could be construed as military use. You can buy a ballistics blanket, but no armouring. The UN is peacekeeper, not warmonger. 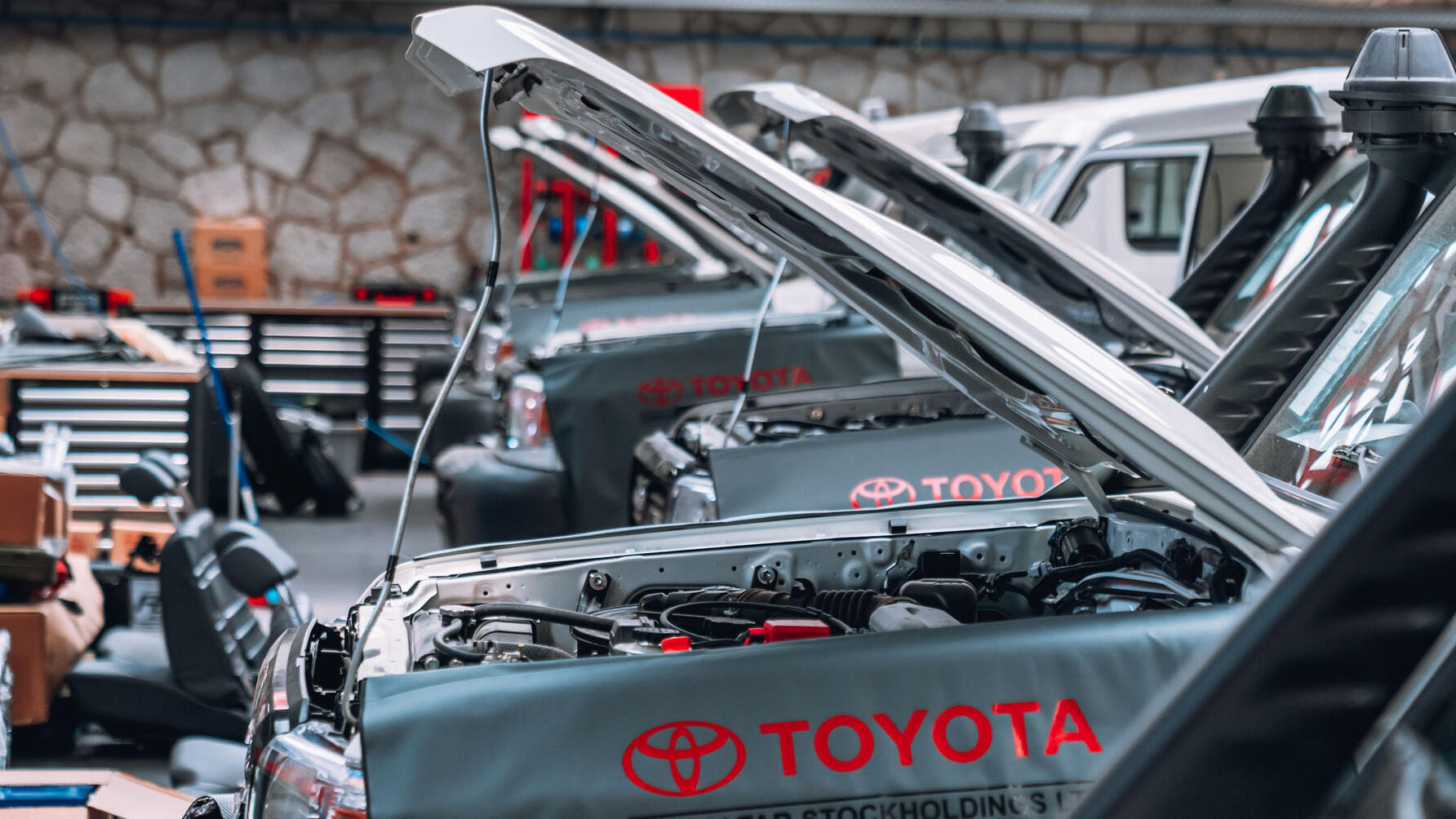 The cars are warrantied, there’s aftermarket support, and even driver training. After all, what’s the use of sending a vehicle to an end user who doesn’t know how to operate it? Valérian Lemoine heads up TGS’s driver training programme. “It’s everything from using the clutch and gears properly, reducing wear and tear, to being a safe driver. If you’re giving someone a 2.5-tonne vehicle they need to know how to handle it. Plus organisations realise these cars are the face of their project – they don’t want to be seen in a negative light as irresponsible road users.” Valérian used to work for MSF, which has a global fleet of 4,000–5,000 vehicles. The UN is now leaning on TGS to help spread its road safety message.

Jonathan gives me a tour of the warehouse. The base cars are compellingly simple in a way we’re no longer familiar with: wind-down windows, clunking locks, austere switches. The kit they fit is solid, dependable. Much of it seems to come from Australia. “We fit Codan radios, which is kind of going back to the Flying Doctors type thing, but the UN and NGOs still use it because it’s got great range. People here will say it’s dead because we’ve got mobile phones and satellite phones. Well yeah, but if there’s a coup the first thing they take down is the cellular network. So your phones have gone. Whereas if you’ve got your own high frequency network, you’re still talking.”

Whether technology is obsolete depends on your perspective. They’ve heard endless stories of people exporting Euro VI emissions compliant cars to Africa that then detonate on the local fuel. “We can do cutting edge tech,” Gourlay insists. “Geofencing cars, remote immobilisers – the Land Cruiser you’ve been driving is fitted with a panic alarm and we know it works because it gets pressed accidentally every time the car is cleaned.” 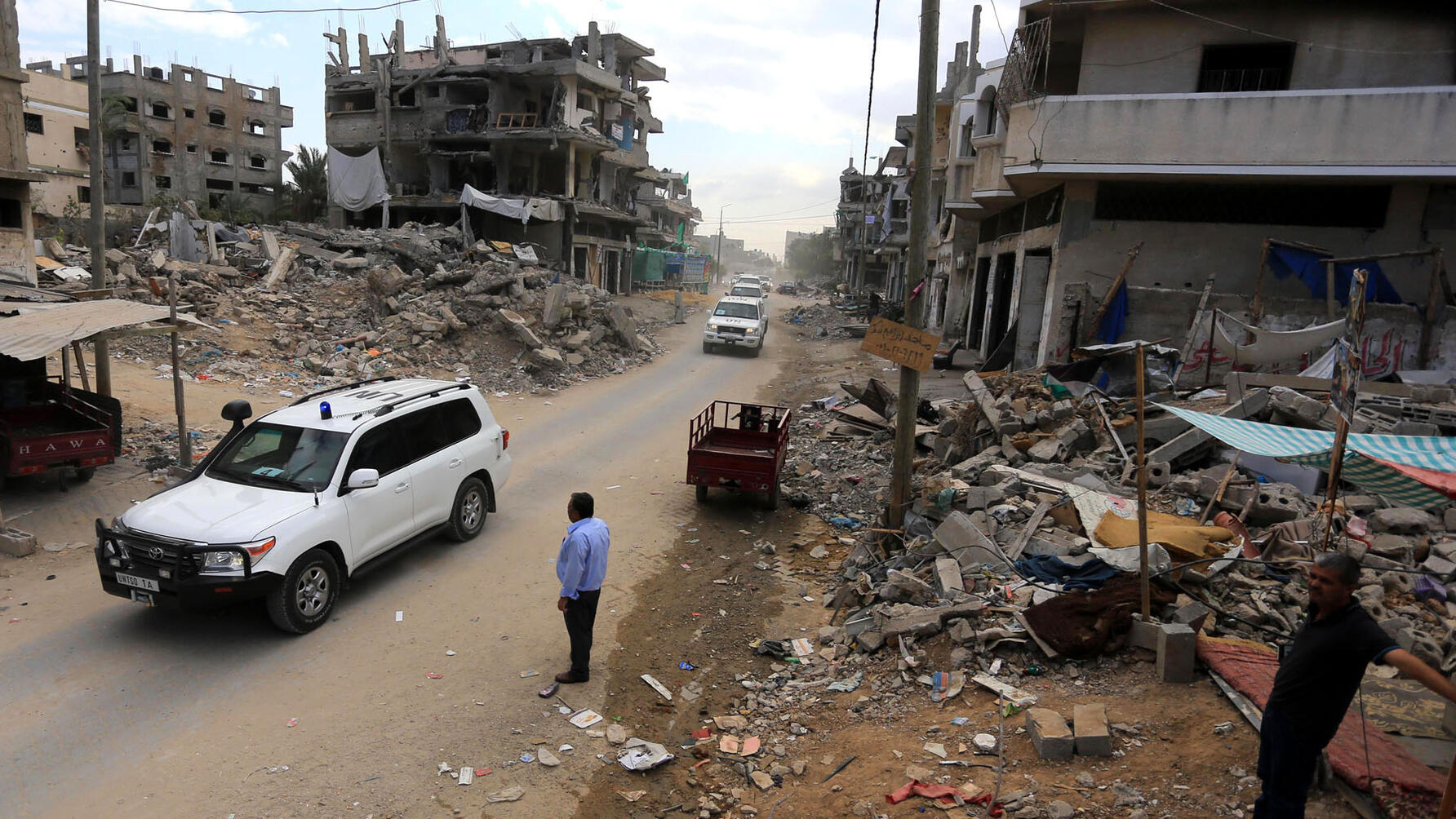 It’s not sophisticated to drive by the way. The steering needs armfuls of lock, the ride is shocking, the diesel crude and rowdy. “Agencies are more aware of this now – we’re seeing a move to Corollas and RAV4s in some use cases, a desire to be seen to tread lightly.” What matters is not the relative luxury of those models by the way, but that despite the added complication they still have the same dependability. Toyota – with TGS as its outlet – has this market sewn up.

Now think not about the numbers or the logistics, but what a white Toyota represents when it rolls into your town. We see only a car, but in other parts of the world the arrival of a white Toyota signals hope, salvation, medicine, communication, education, aid, food, relief. It signals help. A white Toyota – paint code 058 – is a sign that things will get better. And if that’s not a worthy role for a car to play, I don’t know what is. 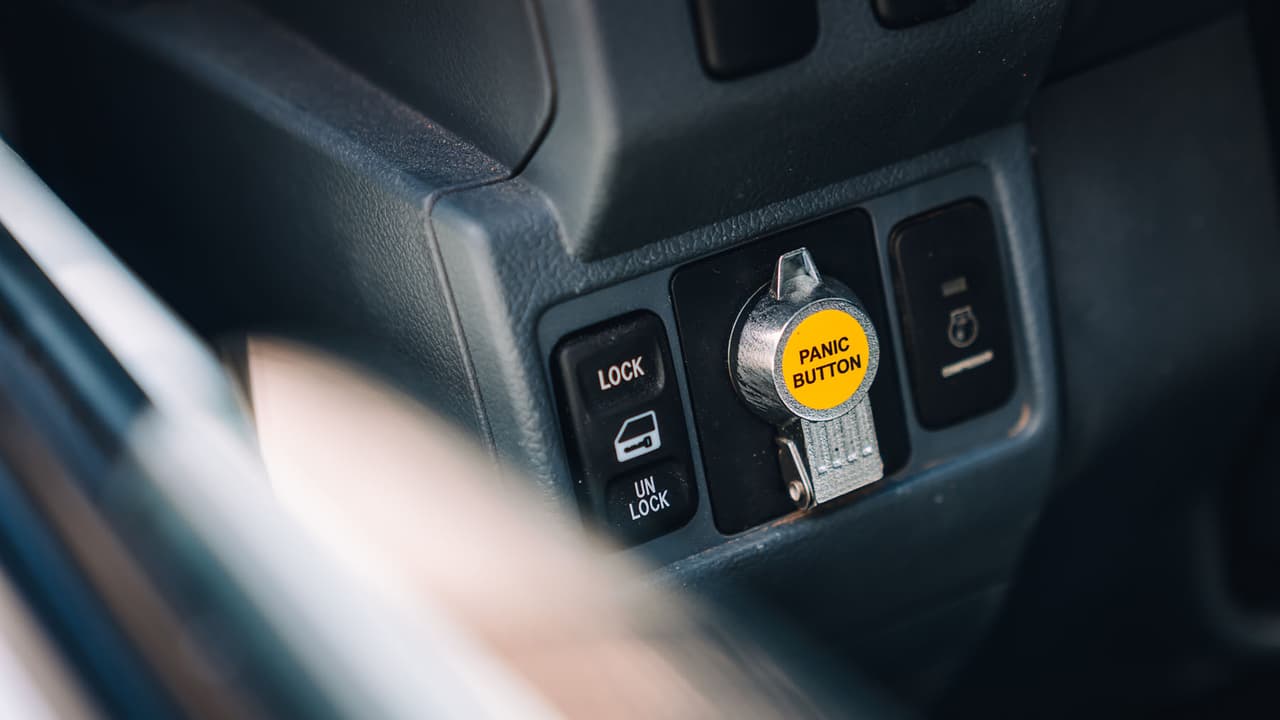