Practice makes perfect. So practice happens everywhere. Intersection traffic lights, small country roads, near city hall, exiting a fast-food joint, past a row of electric cars, staging a quick getaway from a traffic warden. You name it, I found the opportunity to do it. Line lock, then transmission brake, then vanishing point.

Skip 24 photos in the image carousel and continue reading 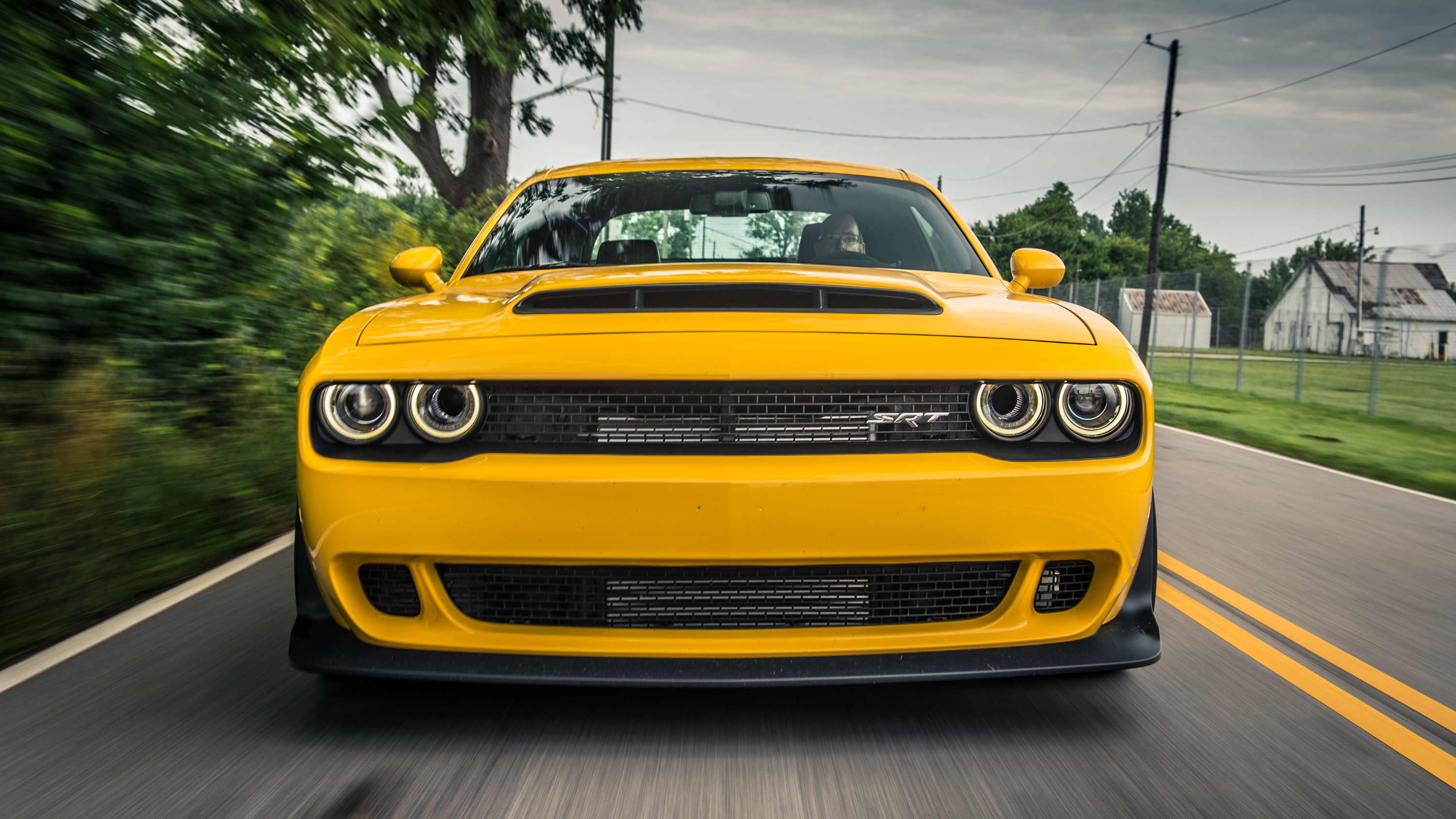 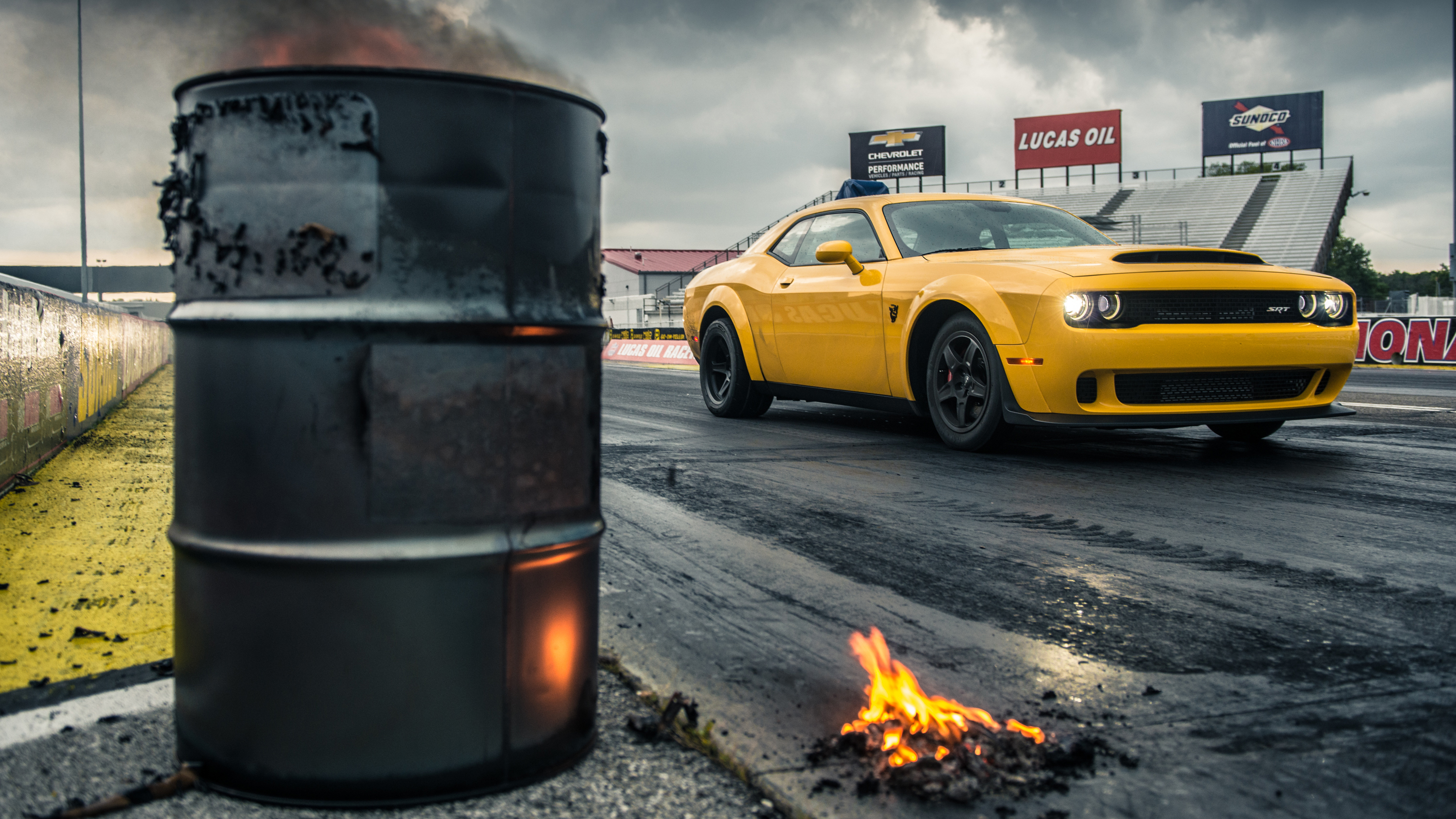 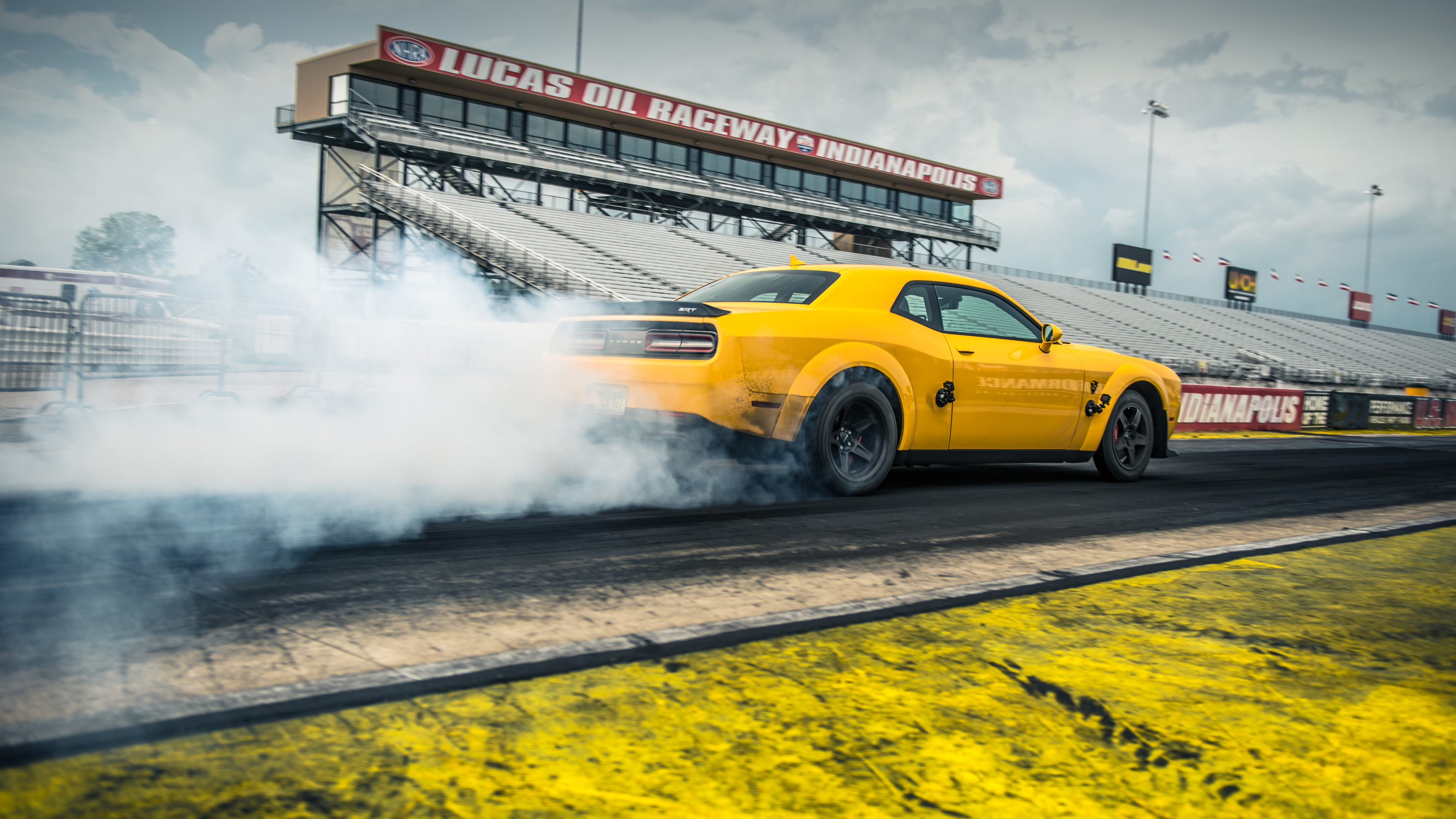 By the end of the day, I have a spray of molten rubber up the rear quarter panels, there’s a pungent smell and oily atmosphere in the cabin that won’t go away, and thick, dense, hot, black, acrid, oily parallel lines have popped up across Indiana. To the casual observer they might look like giant strips of liquorice.

But there are no casual observers around here, because this is the drag belt, where racing is a religion and the church is the quarter-mile strip at Lucas Oil Raceway. And we have a car named the Demon, spawn of Hellcat. How do God-fearing Christian Americans square this circle? Because, my God, do they love this car – around here, the Demon is the second coming.

We don’t really get drag racing in Europe. We might have Santa Pod, but we don’t truly understand. I’m beginning to, after I’ve talked to the man preparing the track for the PDRA drag meet (see panel), seen the tattoos, chatted to competitors about pulleys, grooves and staging, and boggled at the amount of money that must have been hosed on the cars, the strip, the facilities.

This is where the Demon came from. No other country could have created it. Name me a European marque that would boast about its car having the “highest fuel-flow rate of any production car”. None would. Yet Dodge proudly claims it can inject fuel into the cylinders at a rate not far off your bathroom tap. Not so much mpg as yards per gallon. 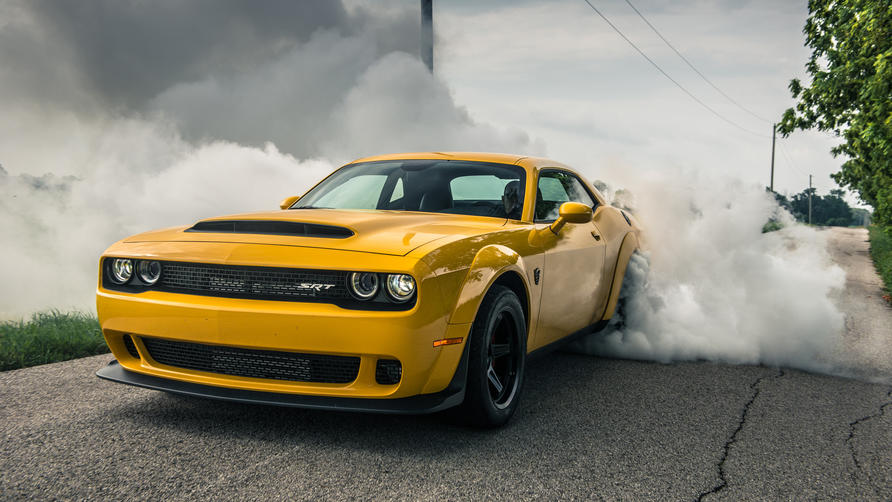 Given how much this country loves drag racing, it’s almost a surprise it’s taken this long to create a production car that’s designed specifically to do just that. Because that’s what the Demon is: a Challenger Hellcat prepped for the strip, with no greater ambition than to race in a straight line. Because there can be no greater ambition than that. I talk to Tim Kuniskis, whose job title (head of passenger car brands, FCA North America) does nothing to convey his passion for his most extreme product.

“Our goal from day one was, in street trim with pump gas, to do 9s and pull the wheels”. You get that right? The Demon’s key development targets were to pull a wheelie and smash the quarter-mile in under 10secs. How brilliantly simple and honest. To provide perspective, when I tested the McLaren 720S recently, it did the quarter-mile in 10.2secs. The Demon does it in 9.65secs. That’s how fast it is.

Of course, it’s a blunt instrument. It weighs almost two tonnes, but sledgehammers it with 840bhp and 770lb ft, all sent to a set of bespoke Nitto drag radials. And that’s it: the application of power and grip against weight. But there’s more, there’s titillation, which isn’t something I imagined you’d get from a motor as thrusting as the Demon.

Buy the car for $84,995 and for a further one dollar you can buy a packing crate containing skinny, front caster-wheels, a new engine controller to make it run on race fuel, a special VIN plate for the dash and all the tools you need. Without it you’ve still got 808bhp, 717lb ft and the ability, given a perfect start, to pull the giant 315/40 R18 front tyres off the deck, but only with the pack can you use 100 Octane gas and hope to match the near-metre-long wheelie Guinness World Records verified.

This afternoon, I’m booked in at Lucas to try my hand at drag racing, so I’m using the morning to practise. Most times I drive in America, I bemoan the lack of roundabouts. This time I’m lovin’ the lights. Every block through downtown: foot on brake, pull both paddles to engage the transmission brake, dial up somewhere between 950 and 2,350rpm, hold throttle steady, release brake, release one paddle, brace and release the other….

You might assume this is bad for the car, that it stresses the transmission. No, says Dodge, this is what the Demon is designed for. In testing, one car did 5,500 drag starts without a single component being changed (apart from, one would assume, the tyres). A Nissan GT-R manages about three before the diffs call it quits and demand a rest. 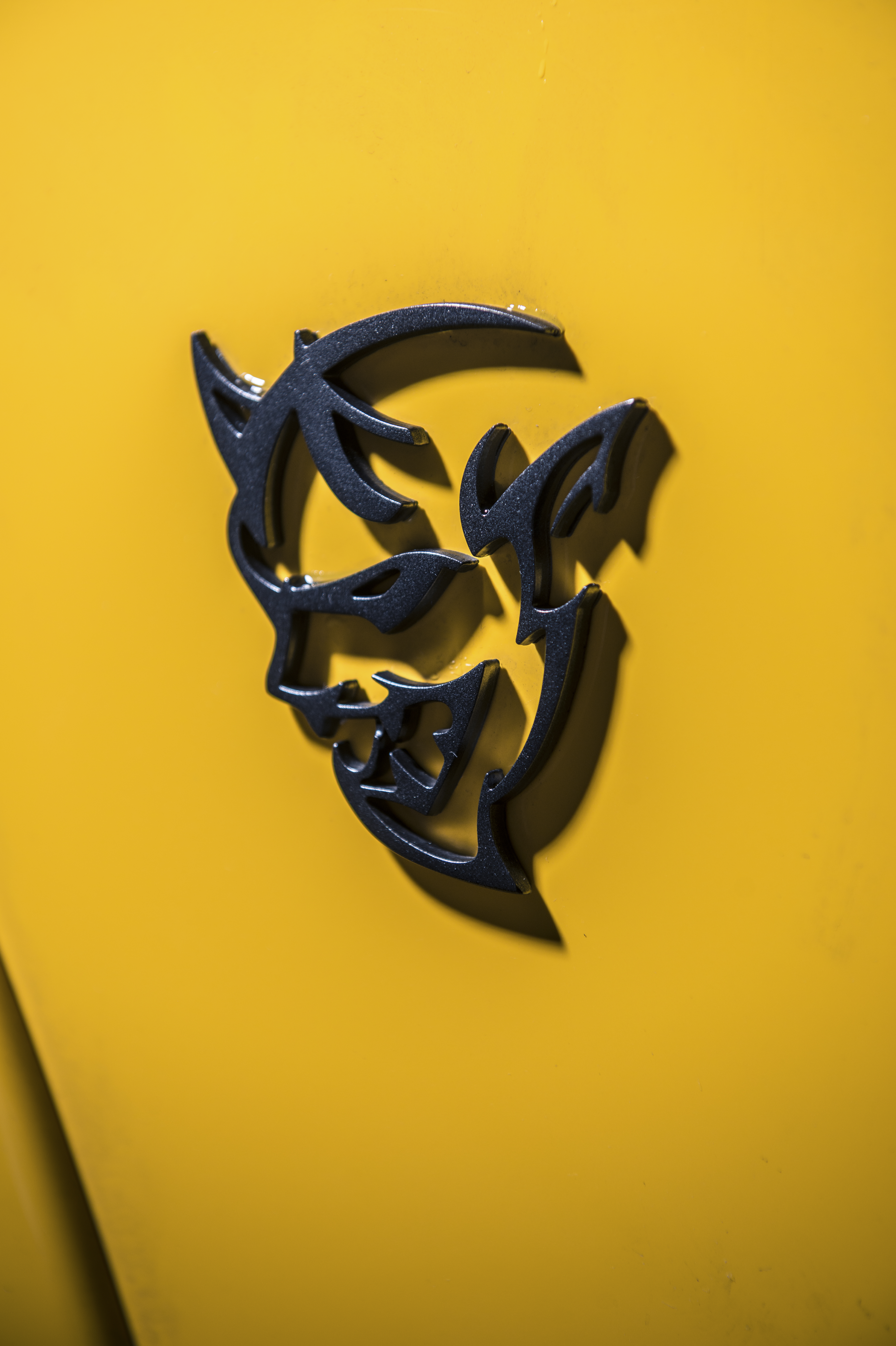 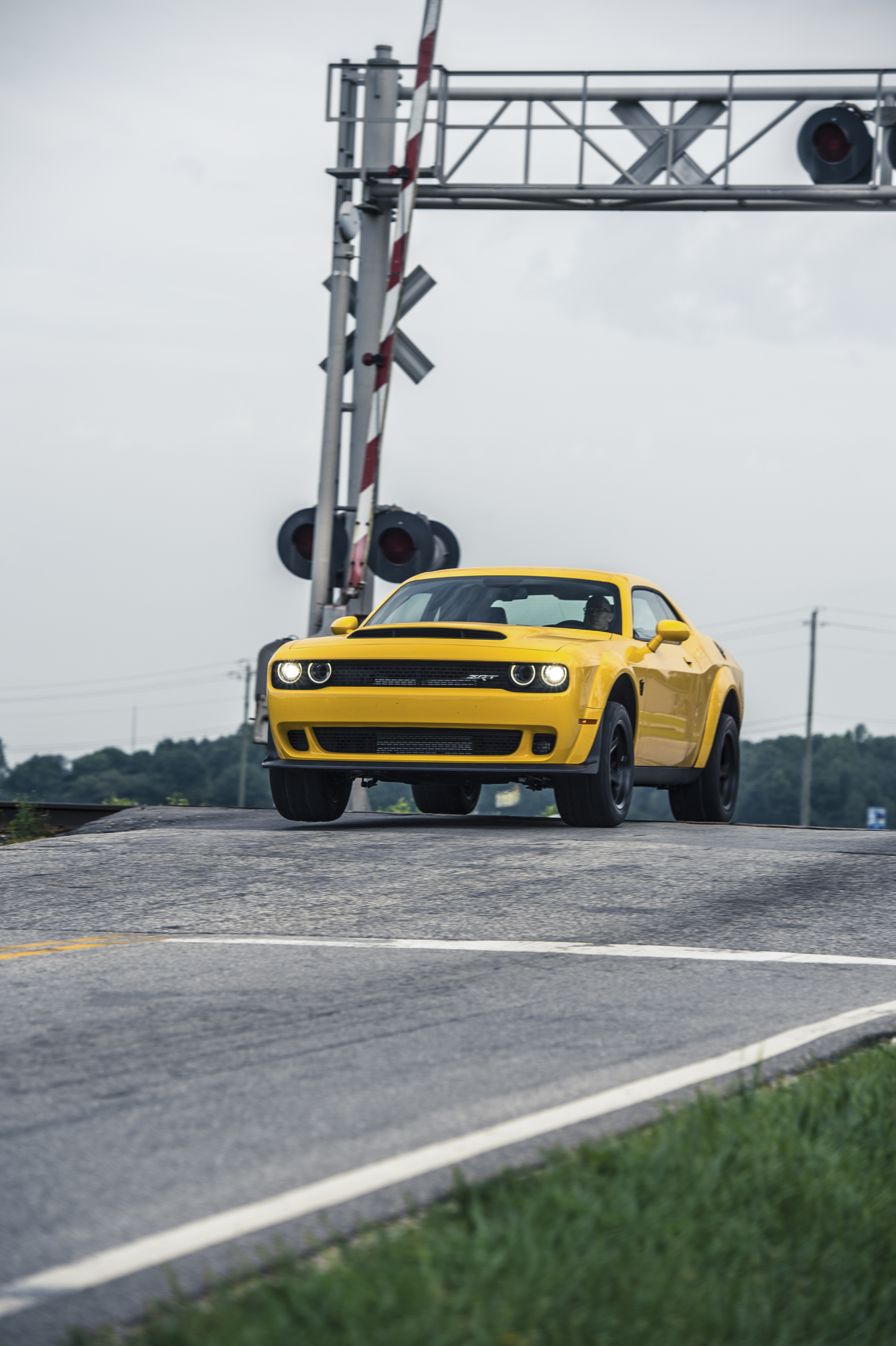 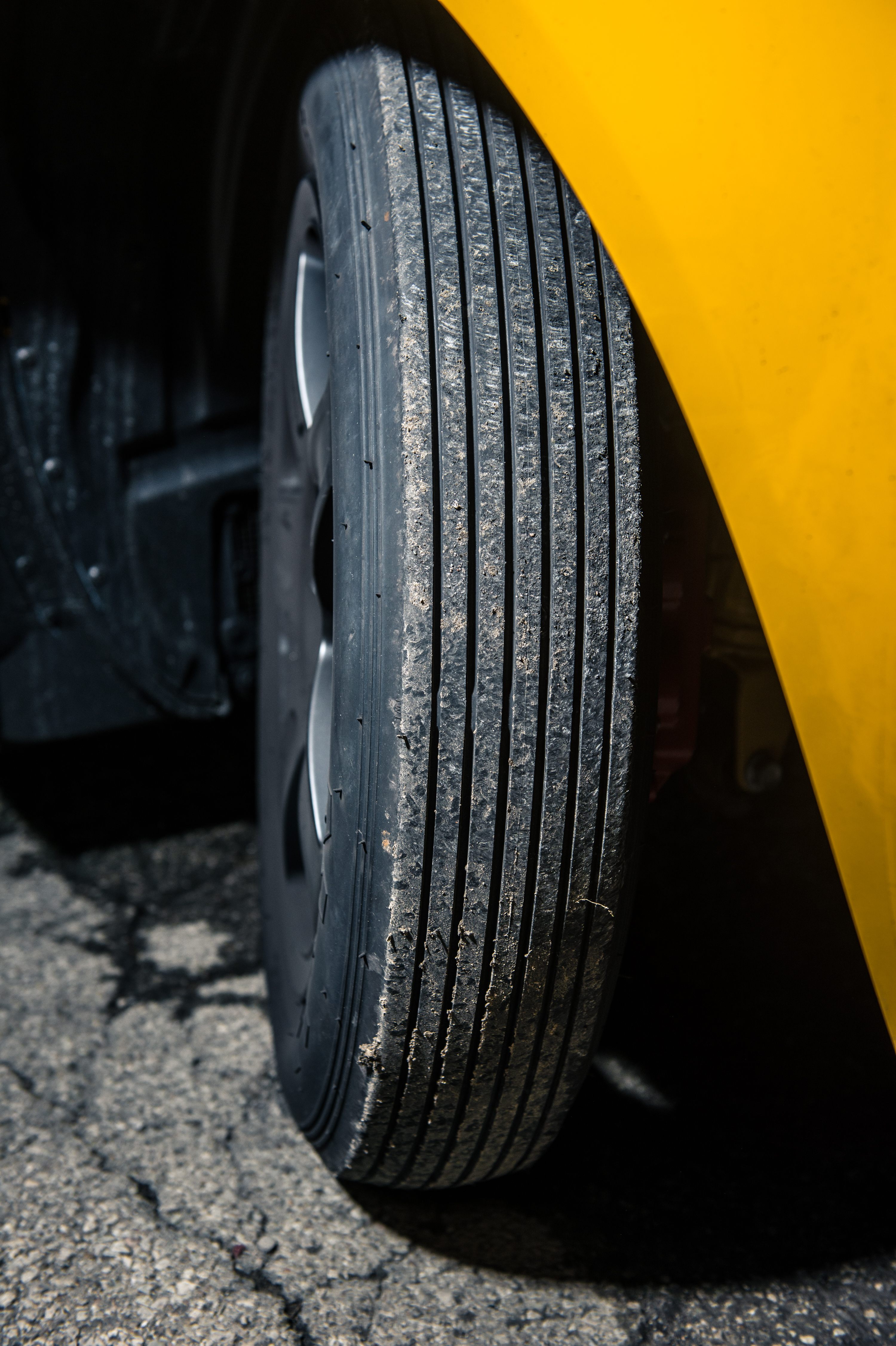 So I rumble around Indianapolis where everyone drives a V8 and early-morning delivery vans sound like Nascar racers, and fit right in. Transmission in D, one hand on the wheel, motor burbling, with occasional sudden sneezes of supercharged shove and squeal. Oh yes, the supercharger; it has a 2.7-litre capacity, making it – you guessed it – the biggest ever fitted to a modern gasoline-engined production car.

And do you know what? If you didn’t go looking for it, you’d never guess it was packing 840bhp. The throttle is easily managed: leave the settings in Comfort and the gears slide by easily, and being 18s with relatively tall 40-profile sidewalls, those tyres help make the ride pretty friendly.

It pulls wheelies. It’s the first production car ever to do that, too. Clearly Bugatti has missed a few tricks

The seats are big, squishy and don’t so much lock you in as provide you with several seating positions at the same time. The rear seats have been deleted and replaced by extra bracing and mounts for the harnesses that I have no intention of using until I remember that Americans can do everything without leaving the comfort of their car.

It also rained last night, and I’m thinking extra safety might not be a bad idea when, if you buy a Demon, Dodge makes you sign a disclaimer acknowledging the risks if you drive in the cold or wet. Happily, spun-heated rear Nitto NT05R drag tyres grip damn well on moist tarmac. Standing water doesn’t bear thinking about.

As morning traffic builds, we slowly work our way out of town and into the countryside where it’s quieter – and, well, noise travels further. Far enough to be heard by the local sheriff, it turns out. An unmarked Ford Explorer flashes angry lights, and I fear the worst. We’re off to jail for illegal road surfacing – it’s not like we can deny the 315-width stripes daubed a mile back on the pale tarmac. In fact, knowing how fervent people are around here, I reckon he’ll be able to sniff the treads and know it was us. That doesn’t happen. This is drag country – they do things differently here. 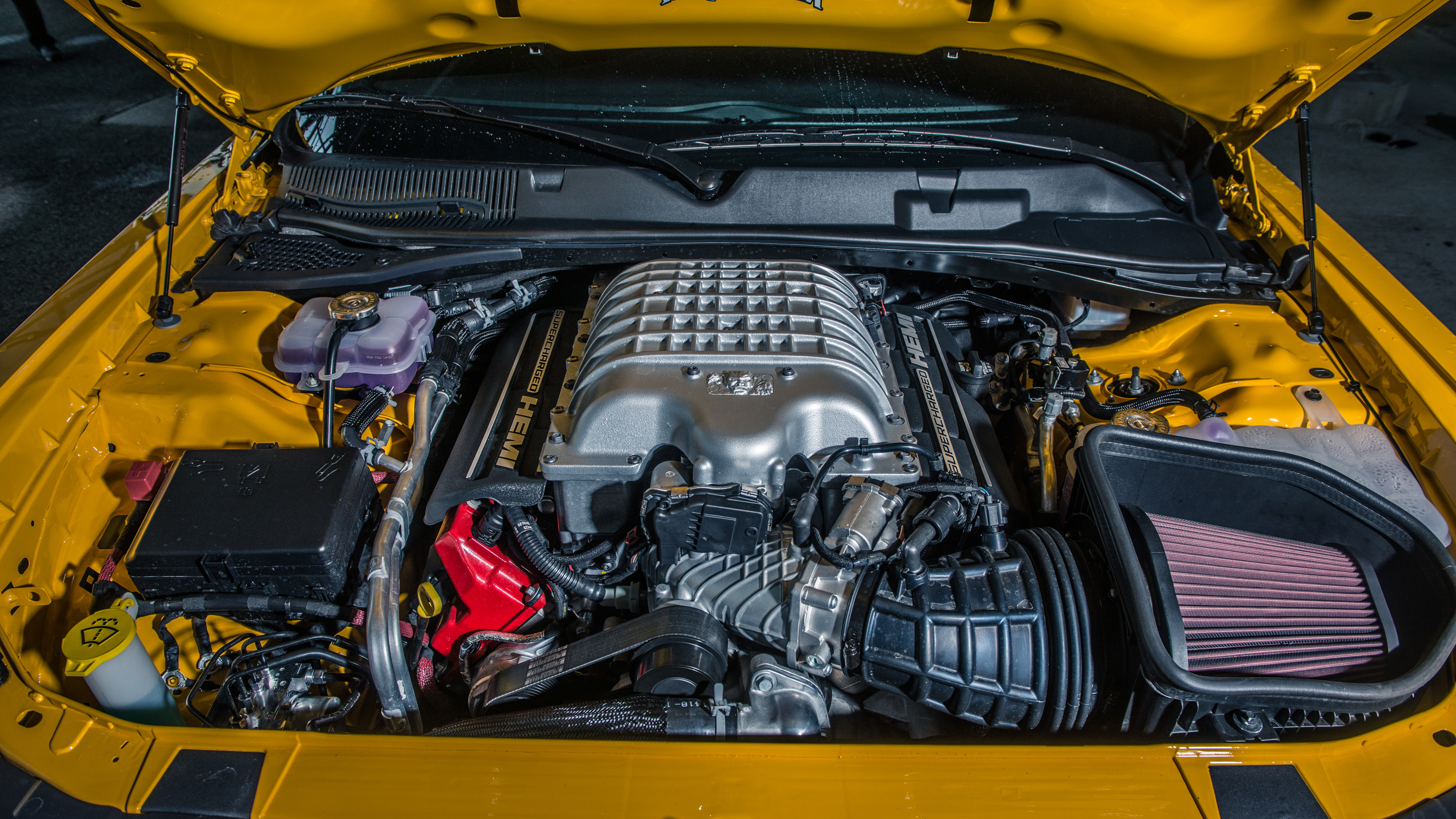 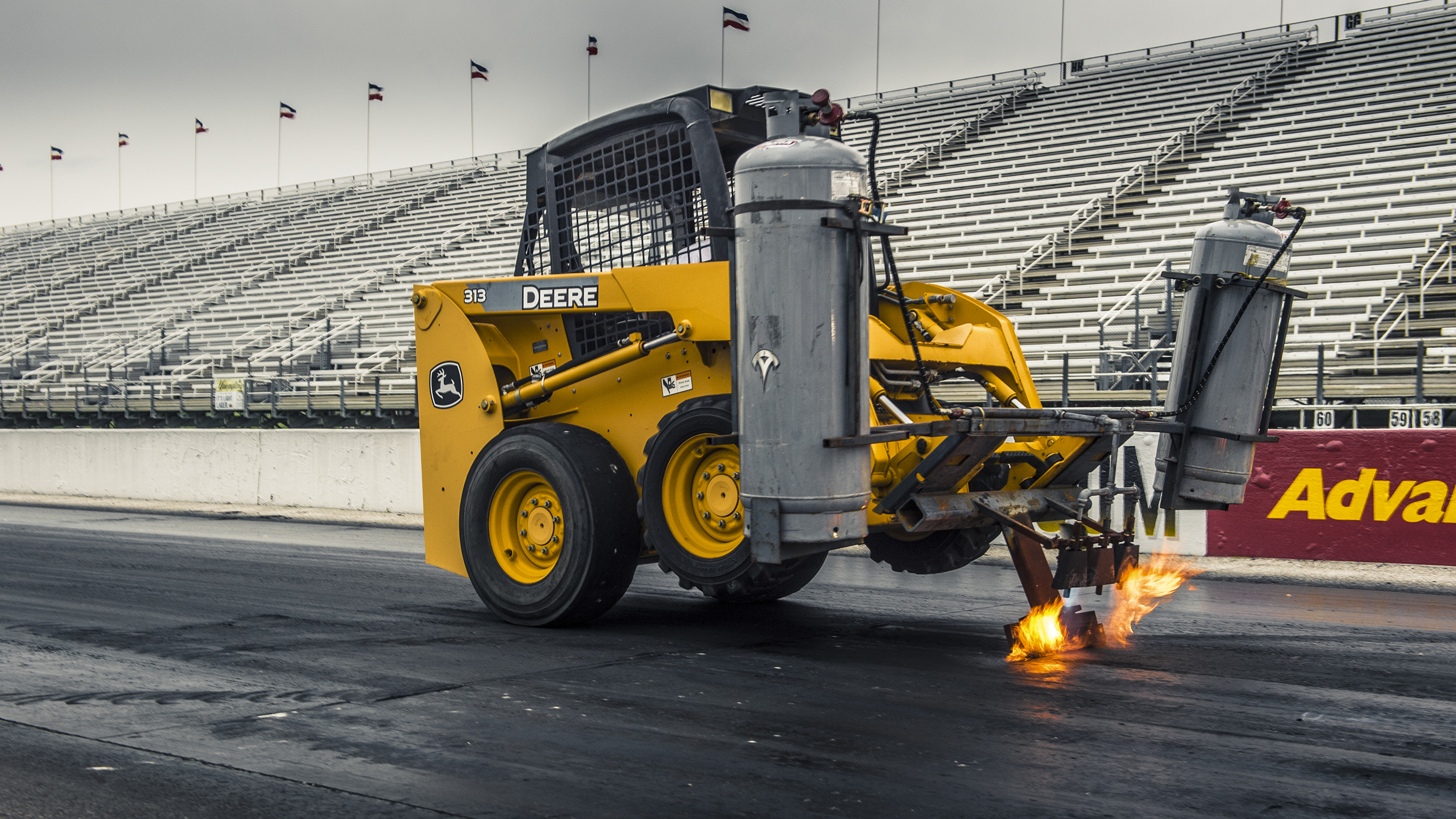 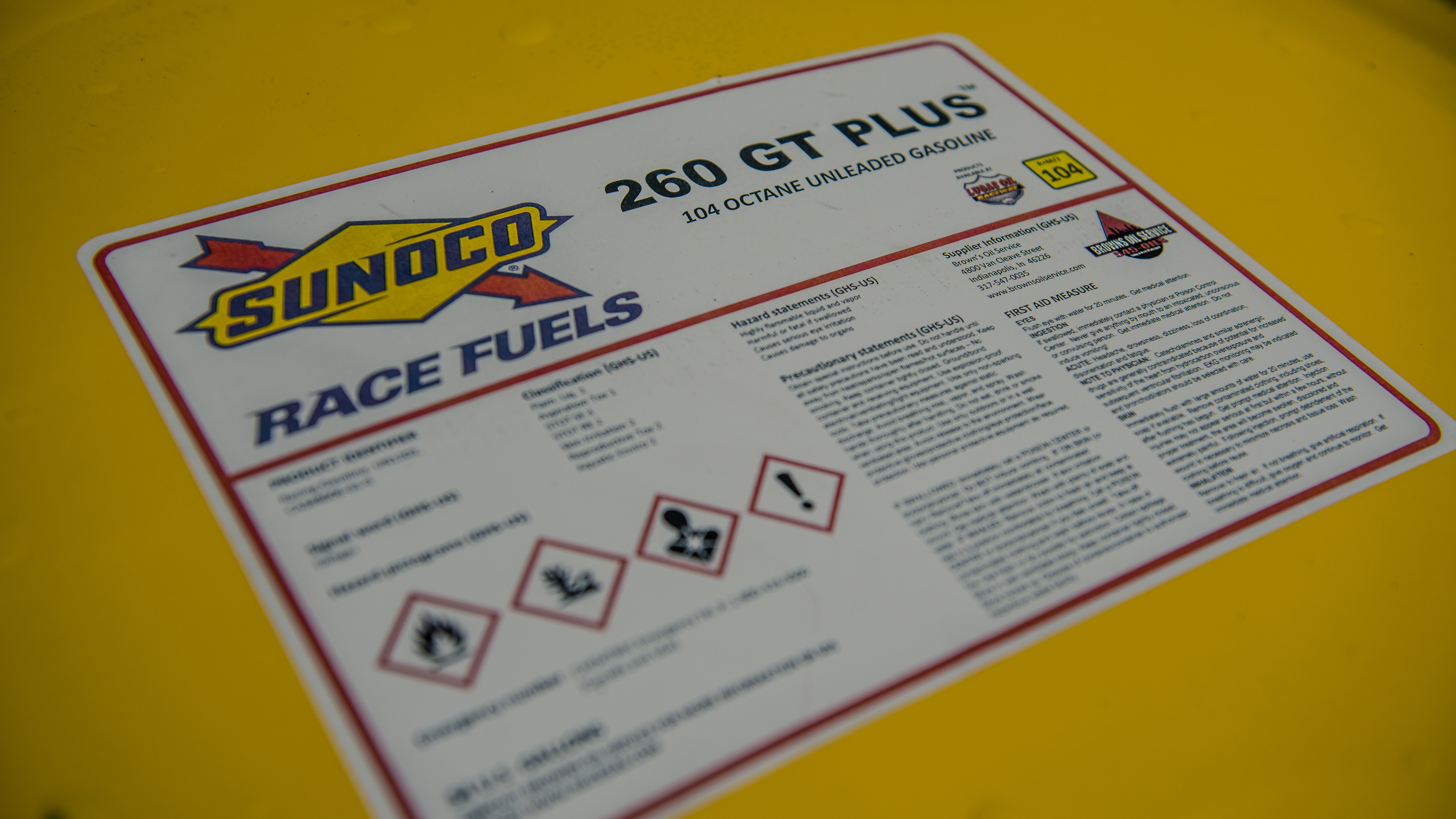 Nevertheless, although I’ve found corners and discovered it rolls quite a lot but that the extra track widths (the Demon shares its bodywork extensions with the new Hellcat Widebody) actually help give it better body control than I’d expected, I don’t feel I’m getting to the heart of the Demon experience. You know what that means…

We turn in to Lucas Oil Raceway, drive down past the well-kept lawns that put me more in mind of a horse racing course and… instantly feel massively out-horsepowered. The paddock is full of ridiculous machinery. The Professional Drag Racers Association is testing today, and we’re surrounded by fat rubber and gleaming headers. The Demon makes ’em laugh.

“Really? And how much does it make then?”

Another bloke tells me there’s a kids’ drag series, based around quarter-scale open-wheelers powered by a nat-asp Briggs and Stratton lawnmower engine, “and they do the eighth-mile in about the same you do.”

I look inside his car and recognise nothing – it doesn’t even have a steering wheel, just a pair of panic grabhandles. It’s as bespoke as an F1 car. I’m not backing out now, I just want the experience, no matter how much the pros might laugh. I fill up with fuel, knowing a couple of runs with the taps open will soon reduce fuel load and burn off the last of the 91 Octane. I want as much help as possible here. 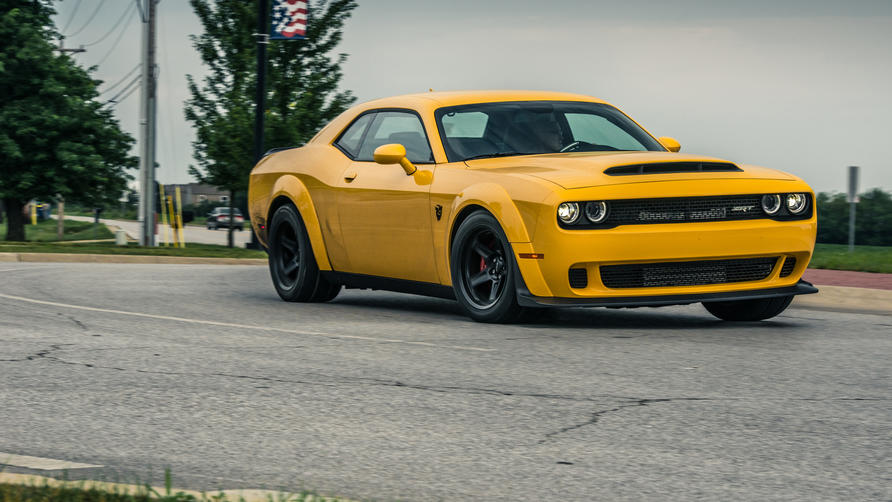 Under the grandstands, I switch the fat fronts for the pram wheels. They’re a third of the width and much lighter, making it easier to lift them off the ground. I still can’t get my head around the maths, though. The Demon has a 58:42 weight distribution, meaning there’s 1,125kg pushing the fronts down, yet it’s got enough power and traction to lift them into the air.

In my time, I’ve launched hundreds and hundreds of cars off the line trying to extract the fastest possible times from them, but this feels alien. The tyres peel themselves off the sticky surface, I have to pay attention to the lights, do a burnout to heat the tyres. I’m familiar with the sequence of button presses and screen stabs thanks to this morning’s practice, but what I’m not ready for is the grip.

Because when I release the paddle at 1,800rpm, the Demon explodes off the line with instantaneous violence. I gasp because that’s my natural response to being punched. What’s the difference? My chest has compressed, the organs have shifted and my head is reeling. It’s nothing less than a blow to the guts. What happened to this morning’s wheelspin? Where’s it gone? Surely what I’ve just felt isn’t a result of wheels turning, but a catapult releasing?

It’s the gearbox’s frantic lurch into second that jolts me back to reality. Ahead, the supercharger shrieks, the nose is up and I’m still pointing the right way. A second or two later, numbers appear on a big board ahead. They’re not the numbers I’m hoping for.

So I take a deep breath, brace myself and go back and subject myself to the pummelling again. More revs this time. And again. Faster throttle feed in. And again. Bigger burnout for more tyre temperature. And again. I wait for the headwind to drop, the temperature to come down, I burn more fuel off, take weight out, add it in over the back axle.

This is addictive in the same way as any track racing – more speed, less elapsed time. That’s all I want. And Dodge has created a car that allows you to do this without a single mod or invalidating your warranty. It felt bulletproof over the quarter-mile, but I guarantee a large proportion of the 3,300 Dodge is producing will be tuned. Because that’s what I’d do. Because now I’m a drag head and I want a faster fix of Demon.