The year's best hot hatches battle it out, as VW Up GTI takes on big bro Golf and the mighty new Civic

It’s entirely natural that when faced with a Top Gear Speed Week line-up that includes a 710bhp McLaren, a hulk-green AMG GT R, a demonic-looking Lambo and one of only two Ford GTs in the country – all with keys in and engines gargling away – the humdrum stuff tends to get ignored.

Yet this morning the world has flipped upside down, because it’s behind the three hatchbacks, with less horsepower combined than one McLaren 720S, that the queues are forming. 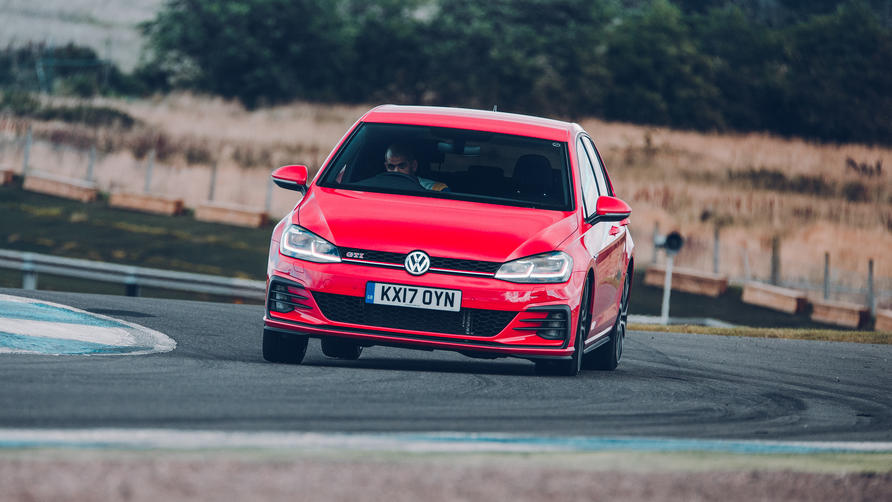 Perhaps the entire Top Gear staff has developed a need to deliver more down-to-earth consumer advice? Perhaps we really are just a nation of hot-hatch lovers, and this is the indisputable evidence?

Nope, it’s raining heavily – like, Scottish heavily – and has been for an hour. The idea of nursing a £420,000 carbon-fibre diva around a sopping-wet Knockhill on cold cut slicks has all the appeal of pink haggis on toast – just ask the Editor.

What hot hatches represent, then, is a relative safety net: usable power, front-wheel drive, proper visibility, ergonomic familiarity. In terrible conditions, they should be the ones that you can jump in and feel most comfortable pushing the envelope. Overstep the mark? Understeer and a missed apex, not several pirouettes and an expensive interface with grass, gravel then wall. That’s the theory, at least.

Which first, though? Old and reliable? Recently upgraded to Mk7.5 spec with more power (242bhp and a mechanical diff for our 7spd DSG-equipped Performance Pack test car), new wheels, LED lights and revised infotainment, the Volkswagen Golf GTI is easily the most anonymous car here. Pint-sized Up GTI sister included. Historically, GTIs dazzle in isolation but don’t fare well on big tests like these, but there’s a chance that conditions here could play in its favour. 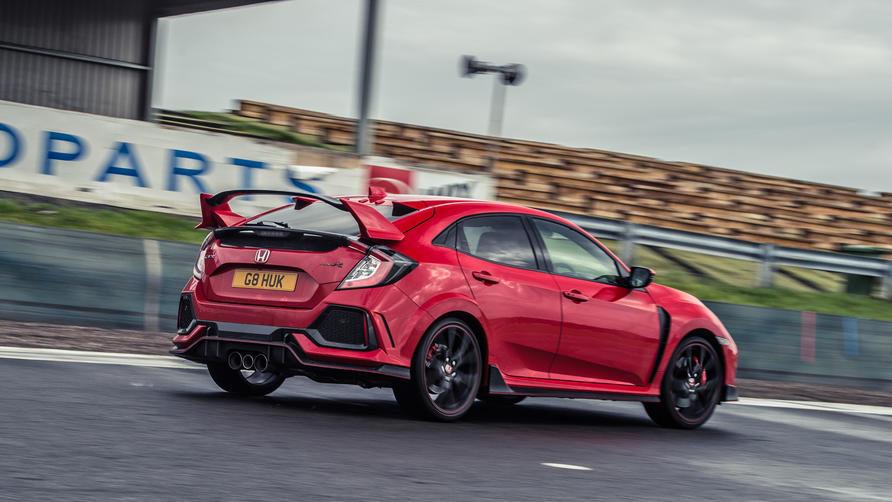 Or do I grab the Up GTI? Ever since we threw one about in front of a Chiron I’ve been clucking for a go. It may have just 113bhp from its 1.0-litre, 3cyl turbo, but with 15mm lower suspension, meatier steering, only a six-speed manual and a featherweight 997kg to toss around, it’ll do 0–62mph in 8.8secs and 122mph if you have the patience of a monk.

It also has the added weapon of newness – this is the first time that it’s been allowed to face actual competitors... like the 315bhp Honda Civic Type R. Out of its depth? Nah, it’s got tartan seats.

But it’s the Civic that calls to me the loudest. Not because of its Manga (or should that be minger?) exterior treatment, but because I’m yet to drive one and simply don’t believe that the glowing reports and tales of a night-and-day transformation can be true. I took its predecessor to a wet track nearly two years ago and had to park it after two laps, because it was like driving on ice while being punched repeatedly in the balls.

Three corners is all it takes for it to dawn on me that this is something entirely different. The 2.0-litre turbo, now with 315bhp and a lusty 295lb ft of torque, still isn’t the main event, but the way it delivers all the thrust you can handle, whenever you require it, is workmanlike in the best possible way. It’s the front end that’s changed – from a mass of torque-steer and wheel spin to supreme bite and accuracy. And when the new multi-link rear axle follows so faithfully, that means immense predictability. 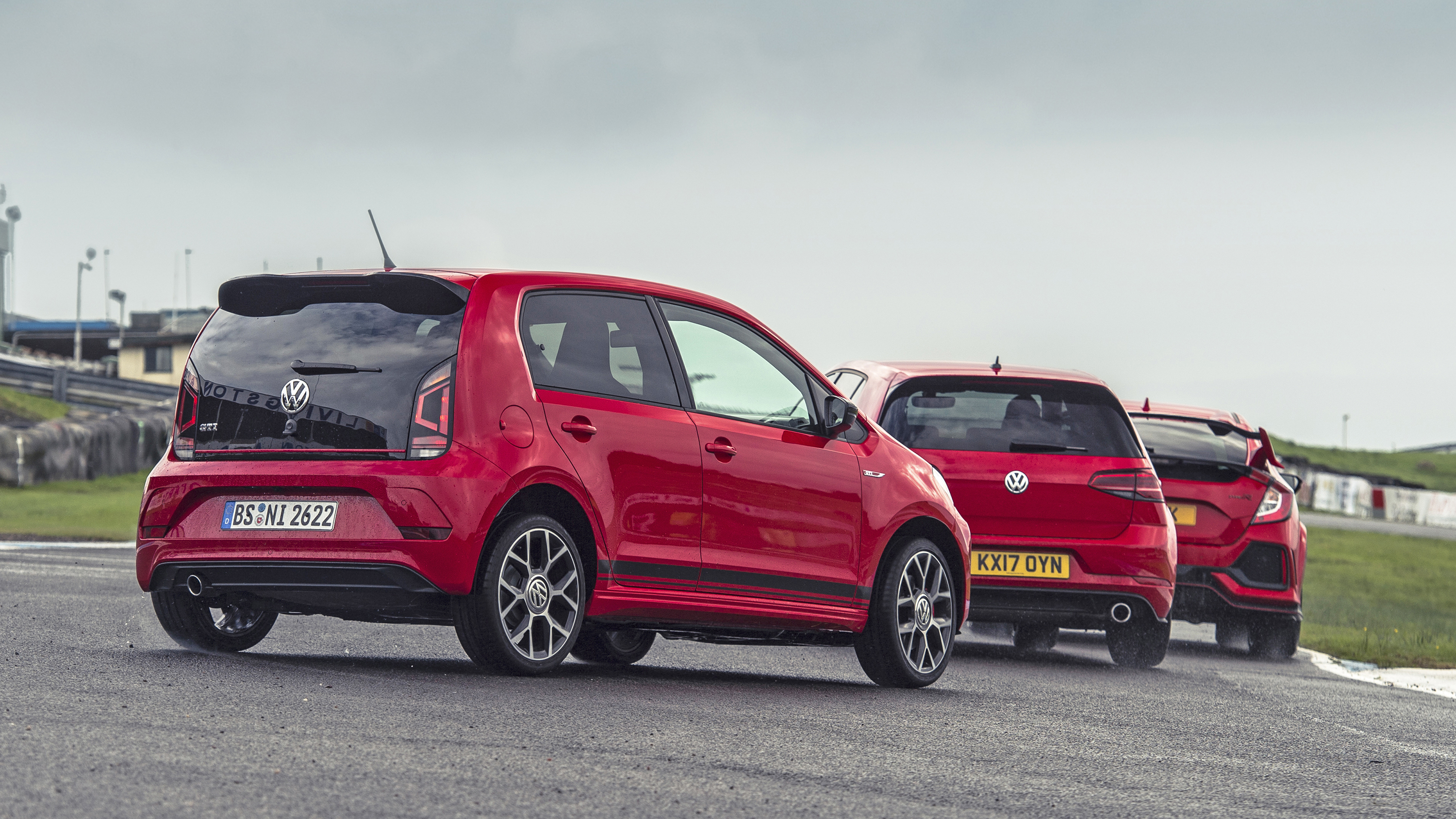 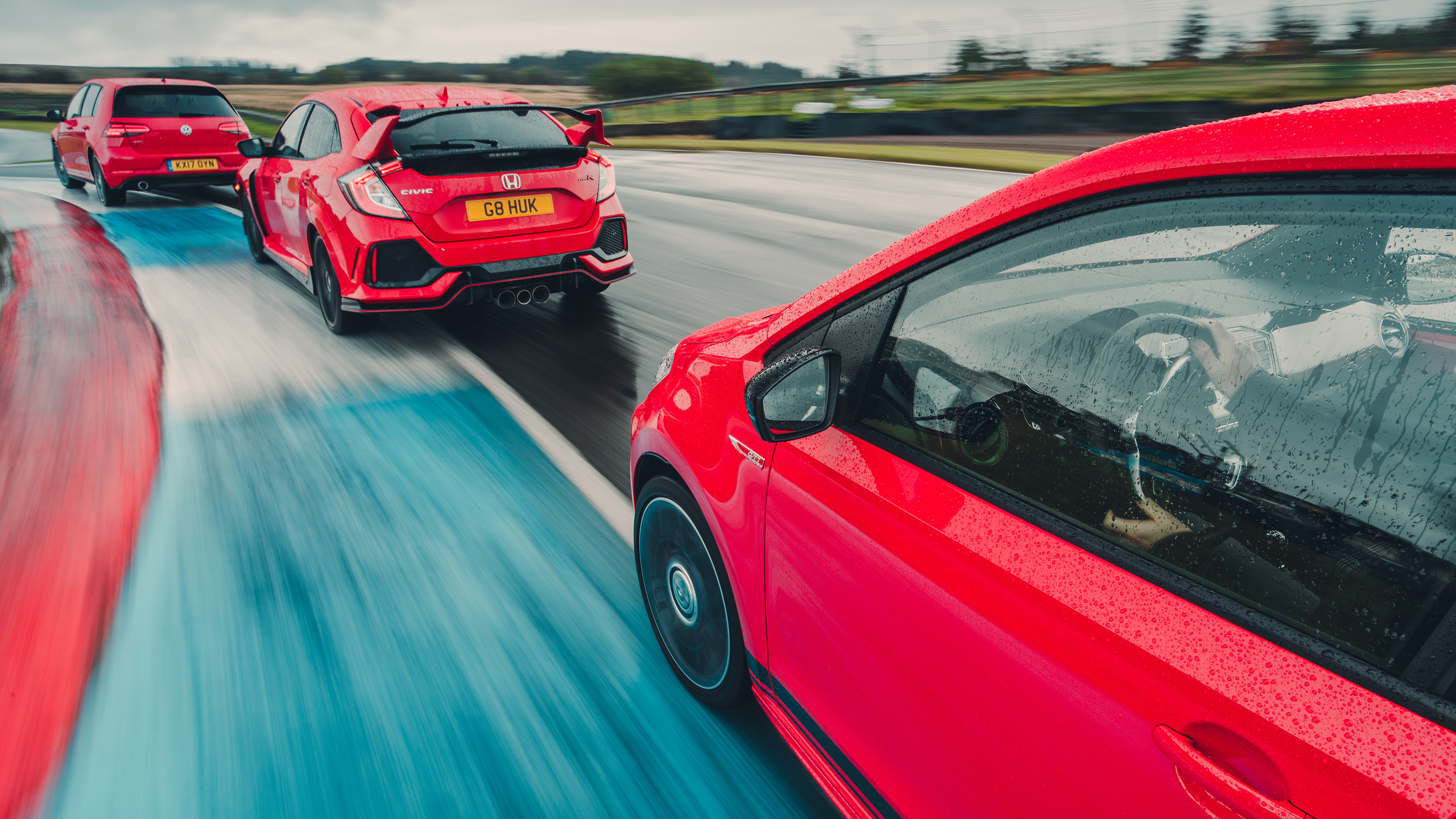 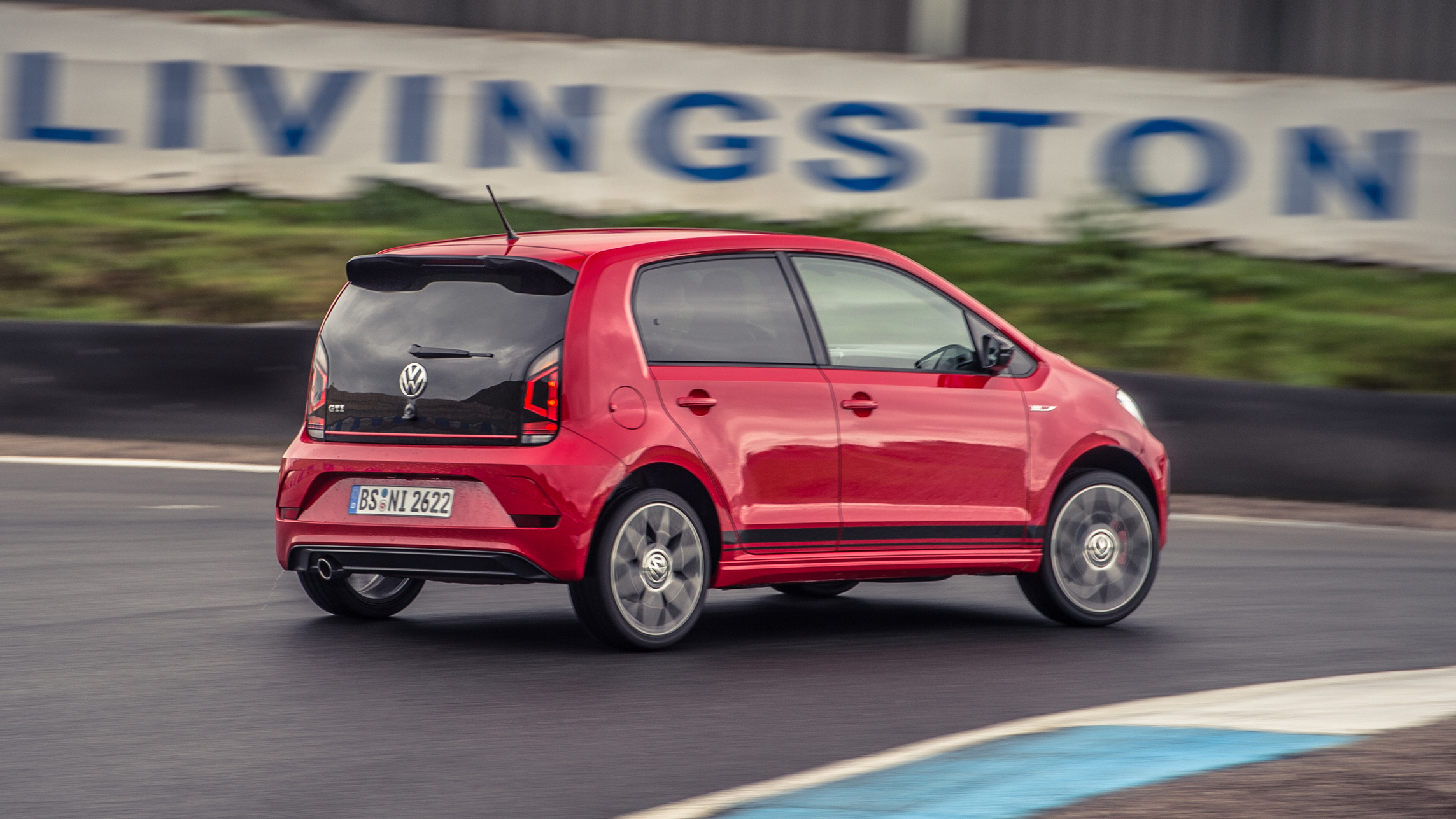 You can lean on the front tyres and muscle it through the corners at obscene speeds, even in the wet, like no other front-driver I’ve experienced… then unleash the power early and let the diff do its thing. Honestly, for the first hour I’m not sure anything lapped as quickly as the Civic. The Audi RS3 perhaps, but I know who was having more fun. Who’d have thought a car that looks so hideously aggressive could be so cuddly?

Speaking of cuddly, sliding into a Golf is like putting on a familiar pair of slippers. The seating position, the view out, the interior layout – it’s the benchmark from where all other hot-hatch pretenders must begin. Trouble is, even with its recent power boost (the standard GTI now has 227bhp, or 242bhp here), it’s starting to be left behind by the Cupras, Meganes, even the i30Ns of this world, hamstrung by the VW pecking order.

Still a stonking engine, though. While the Civic’s turbo lubrication might have been substituted for treacle, the Golf’s is effervescent and zingy in a way no turbocharged engine has the right to be. It’s fantastic. 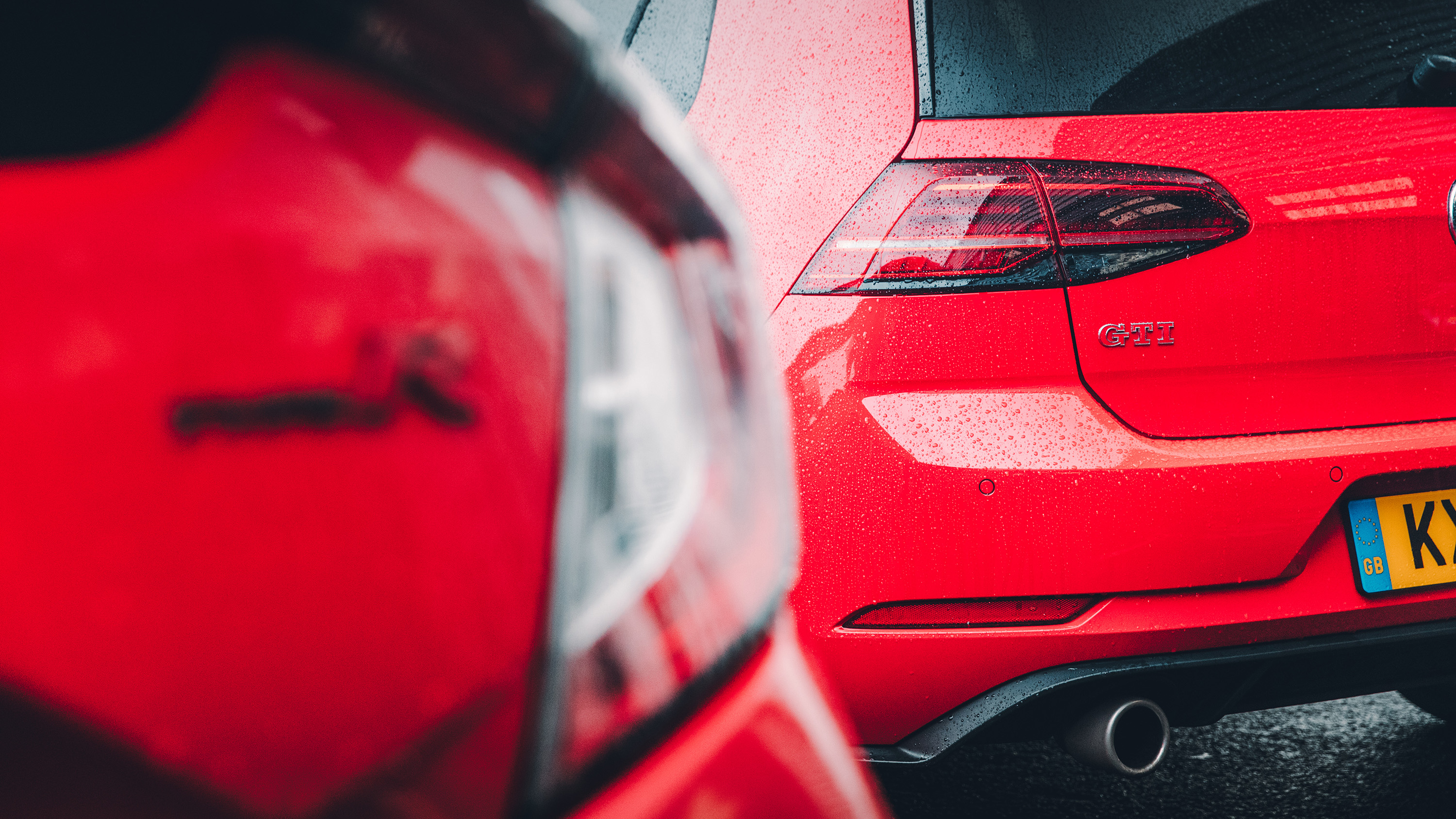 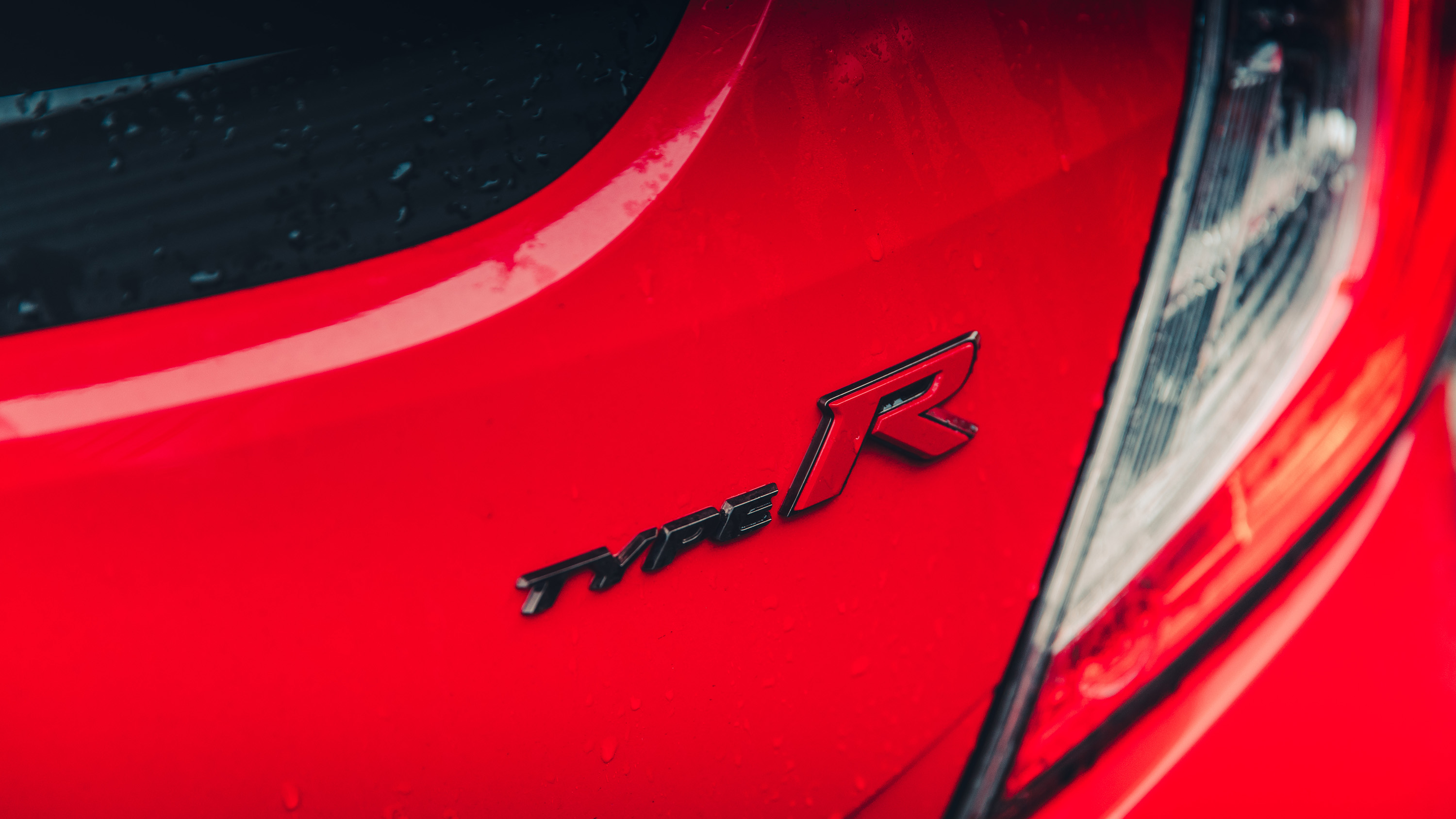 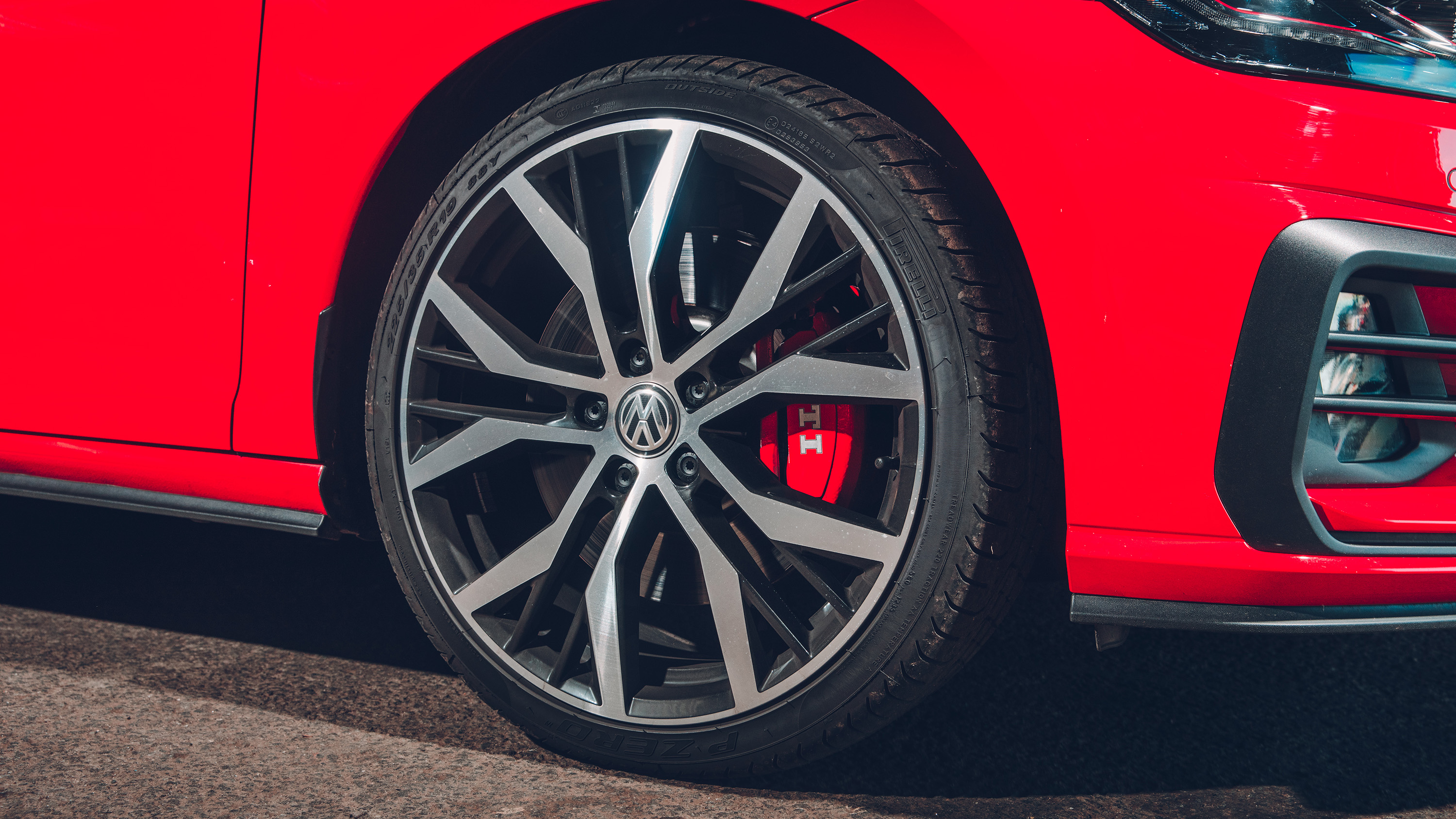 Trouble is, there’s a stick, belonging to the brilliant (and standard) six-speed manual, missing. The seven-speed DSG is an engineering triumph and works as flawlessly in a 1.4 TSI as it does here, but as the Golf is lacking in any standout character traits, you desperately need a manual to give you something to do – to help form that bond. Without it, we remained acquaintances. Sparks did not fly.

The awkward truth is that in real life, country blasts and track days are interspersed with huge swathes of mundanity – if it were your money on the line, you’d probably end up buying the Golf. Fortunately, the beauty of Speed Week (until we take a selection out on the road at the end of the track test, at least) is that normality can bugger right off. 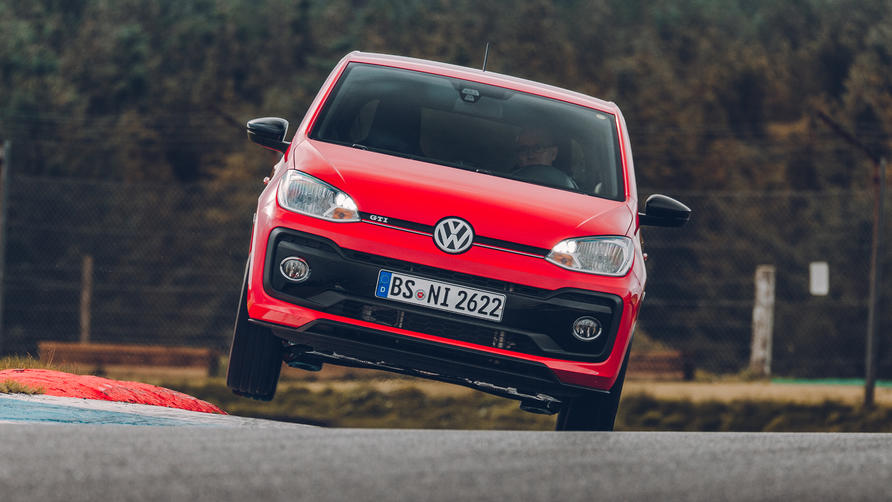 Right now, we’re on a circuit, exploring how good these cars can make you feel, and the Golf has left me numb. How, then, can a car that riffs on the Golf’s design signatures – right down to the red pinstripe on the grille and tartan seats – immediately feel more playful, more exciting, when I haven’t even got in?

The Up GTI is an underdog, that’s why. You know it’s going to be slow and a bit wobbly, and a bit imprecise on track, but for £15k? It would have to be truly awful to stop me wanting one.

Let’s start with the Up’s bad bits, then. The steering is cream-puff light even loaded up, so you never really know where your front wheels are pointing. It rolls in corners and floats over crests, and if that awful pattern on the dashboard isn’t deletable once we can actually buy one, Volkswagen, I’ll be having strong words.

But the plucky three-pot engine is stronger than you think, and even growls a bit past 1,500rpm. Because it’s light, you can take liberties: flick it in too fast, dab the brakes at completely the wrong moment, lift off mid-corner, bounce off the kerbs, just for the hell of it. Or just give it a bloody great bung and tug on the handbrake. 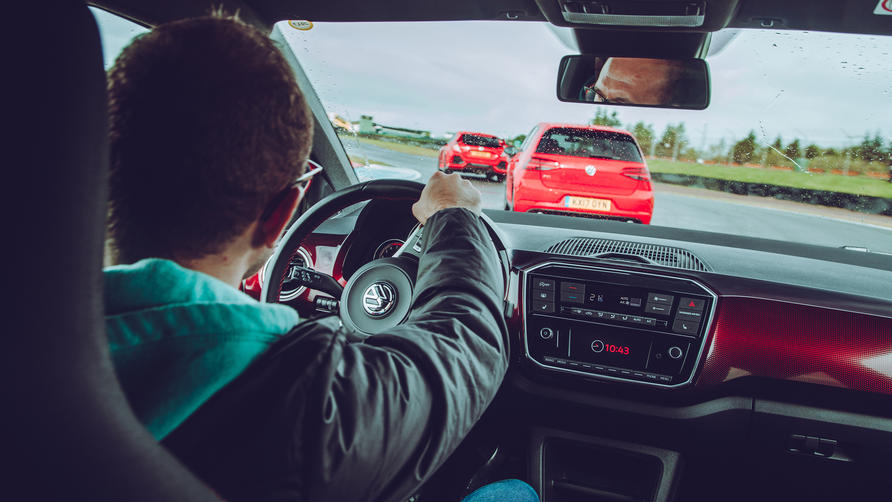 There isn’t anywhere near the mid-corner adjustability you get from a car like the Ford Fiesta ST in the class above, and it never feels as serious about going fast as its wonderful spiritual predecessor – the Lupo GTI. But if our only judging criteria was which car had the biggest heart, the Up would have this thing sewn up by tea.

A neatly spaced trio, then, but as is so often the case, it’s at the fringes, not the safe middle, where the real magic happens. The Golf remains polished all the time, and impressively capable when you manhandle it, but out here, there’s no single strand of its character to get your teeth into, so it fades into obscurity.

The fact that the Up offers VW build quality, GTI kudos and a driving experience that overflows with enthusiasm for around the £15k mark is breakthrough stuff – and truest here to the 109bhp, 810kg MkI Golf GTI’s legacy. It’s not perfect, but it slapped a grin on the face of everyone who came in contact with it.

There were smiles with the Civic, too, but mostly we emerged stunned by its ability to make crushing speeds so stress-free. It isn’t without its flaws – the haphazard interior and not being able to adjust chassis and powertrain parameters individually are missed opportunities – but my Lord, as a driving machine, it’s sublime. 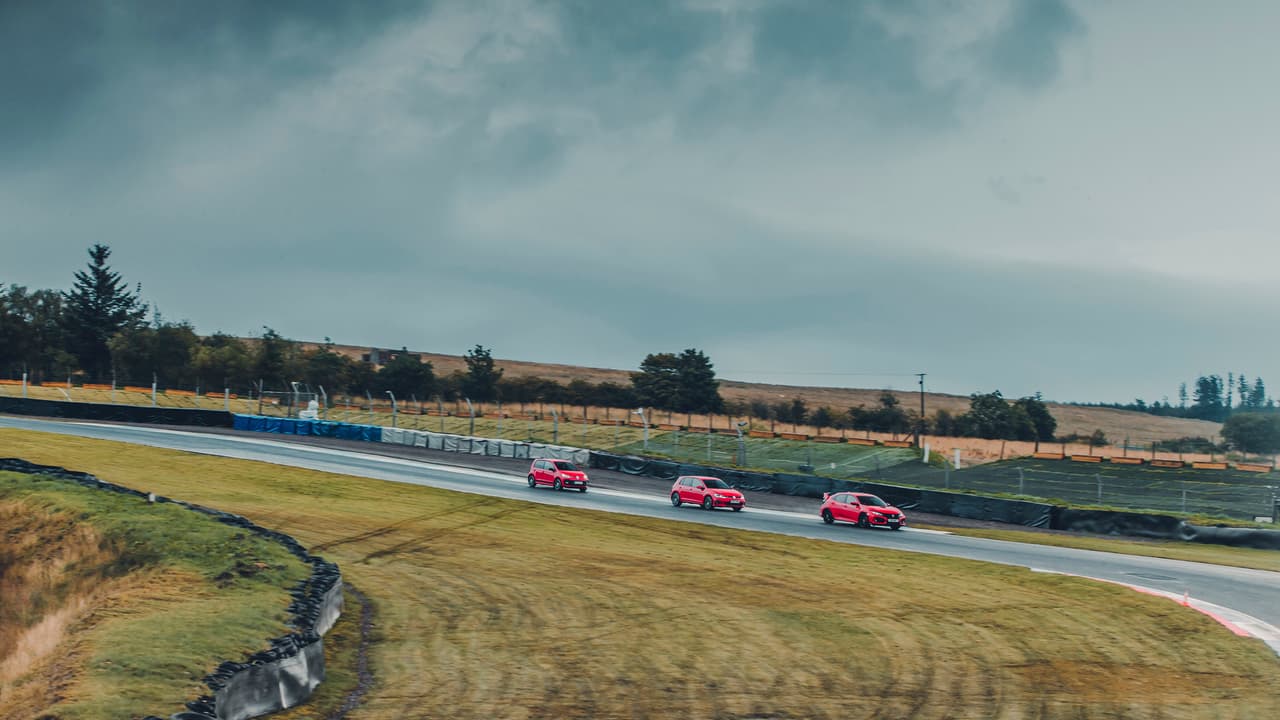