A pair of track-day stars that go about their business in different ways. Which would you go for?

There is a point, on whatever the big right-hander before Follow Through corner is called, where you just have to commit and let the car ride out whatever is coming your way. It’s a trust exercise committed to at 90mph-plus, in which you place your soft, squishy body into the hands of an engineer who doesn’t even know your name. The Porsche 911 GT3 doesn’t even flinch, and if a car could shrug and say ‘is that all you’ve got?’ then this one would have severe back pain; I’ve just flung it faster and faster each time, and it has scythed around Dunsfold like a white-hot boomerang. Until, of course, it rained, and then the car aquaplaned quite a lot, and during that moment of utter silence when the grip is literally floated away and both ends go light at the same time, I was left thinking that everything in the universe was a bad idea.

Luckily, Dunsfold is big enough that I simply passengered for a few year-long seconds before tidying up the attitude of the car and pretending that I had meant to slide the car 75ft in the wrong direction. No one will know. How would they know?

"Bit of a moment there in the GT3?" came a crackling, amused tone from one of the walkie-talkies.

Still, if this were a competition that required a car to be driven to a track, have the seven hells beaten out of it, post some of the fastest laptimes and then be driven home, the Porsche 911 GT3 would have it sewn up. An arcing, crisp flat-six wail that gargles all the way up to 9,000-ish rpm, whipcrack gearchanges from the PDK paddle ‘box, the kind of direction changes that make this car feel like it weighs barely more than a tonne; it's as close to a dedicated track car that you can get without breaking your spine or going deaf. Package that up with reliability and ergonomics that make other manufacturers look like enthusiastic amateurs, and you can see why they have an almost cult following. This is a special car, and you know that the first time you accelerate fully into a third gear corner and let the 911 do its thing. 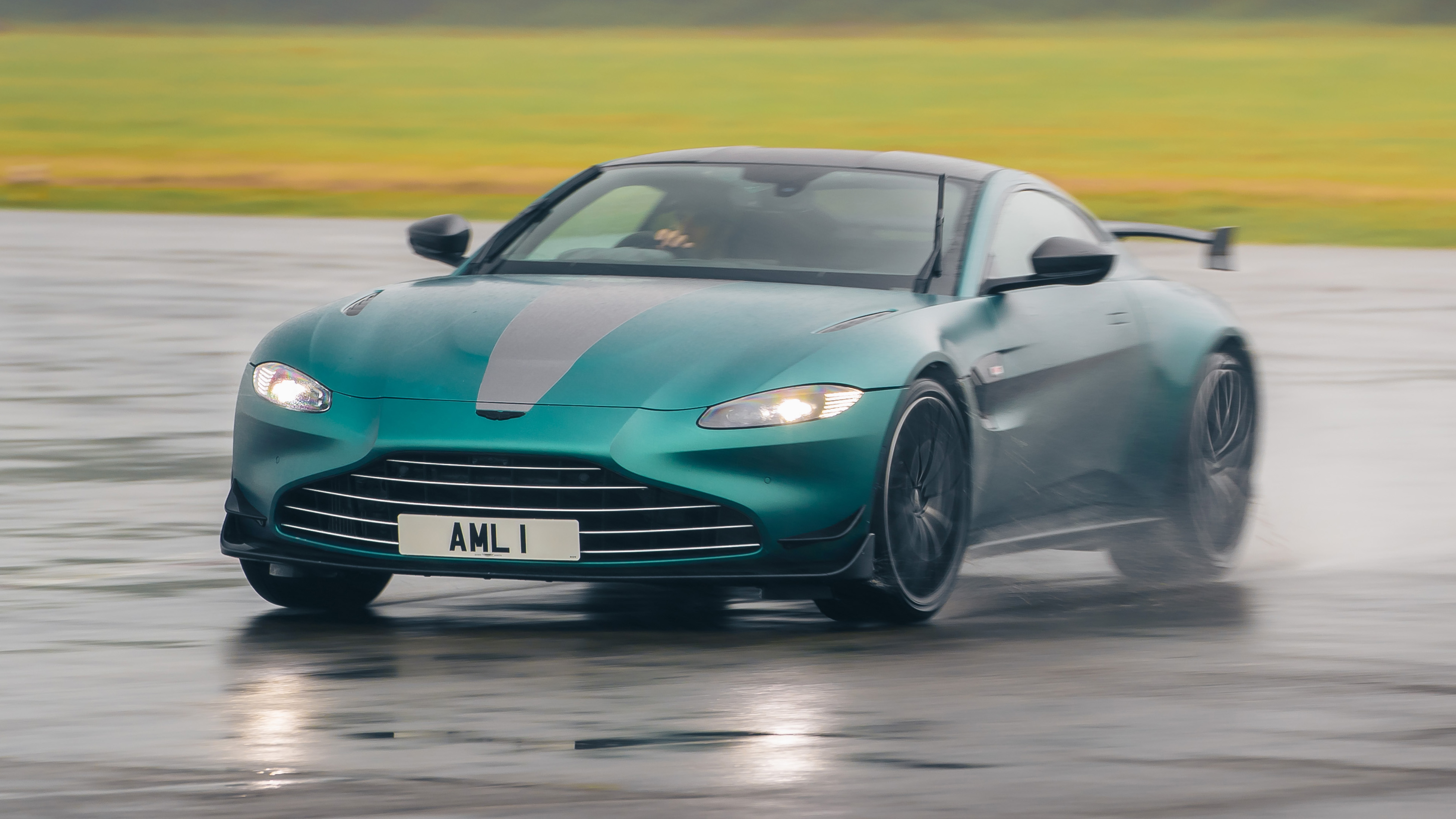 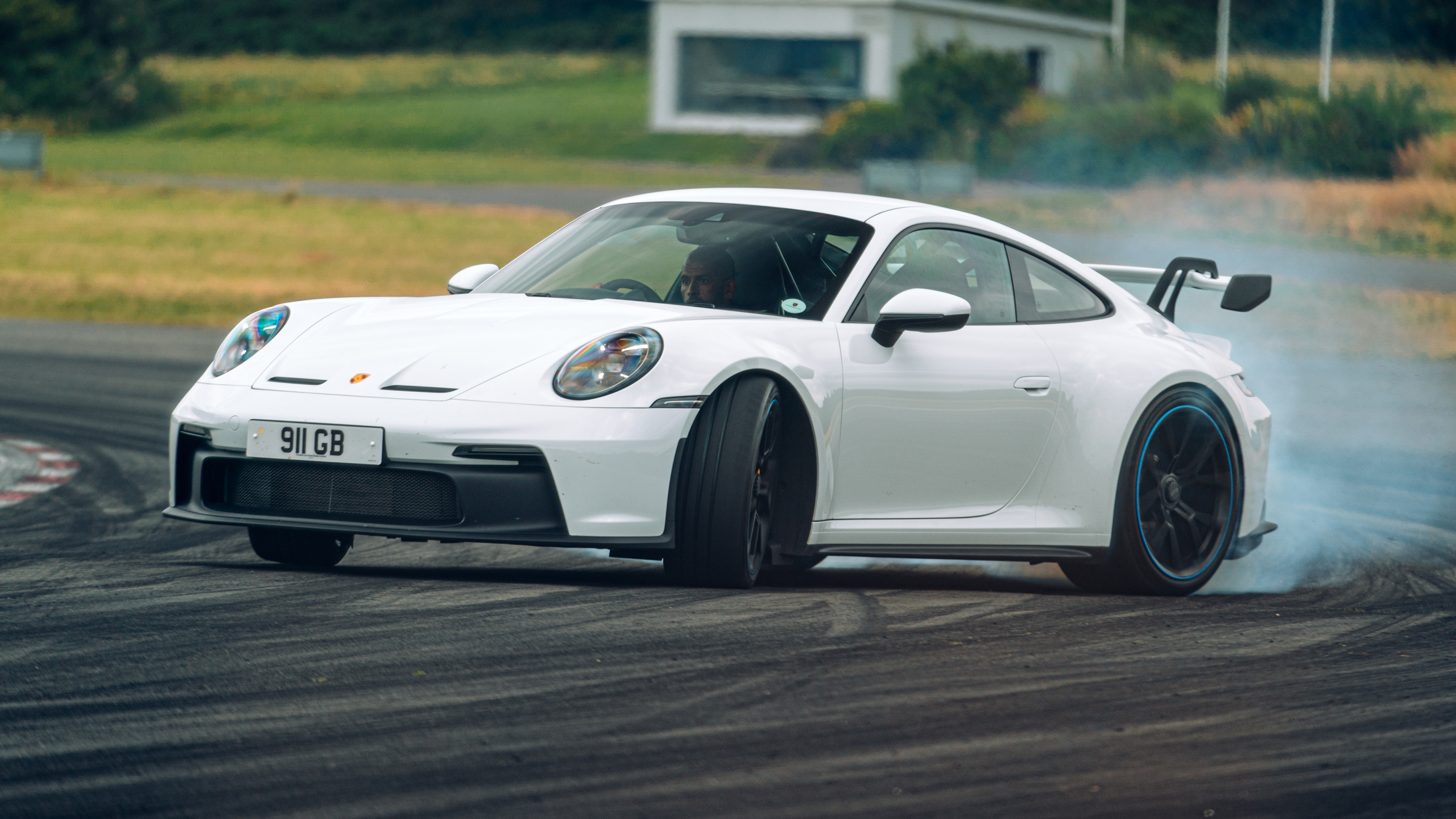 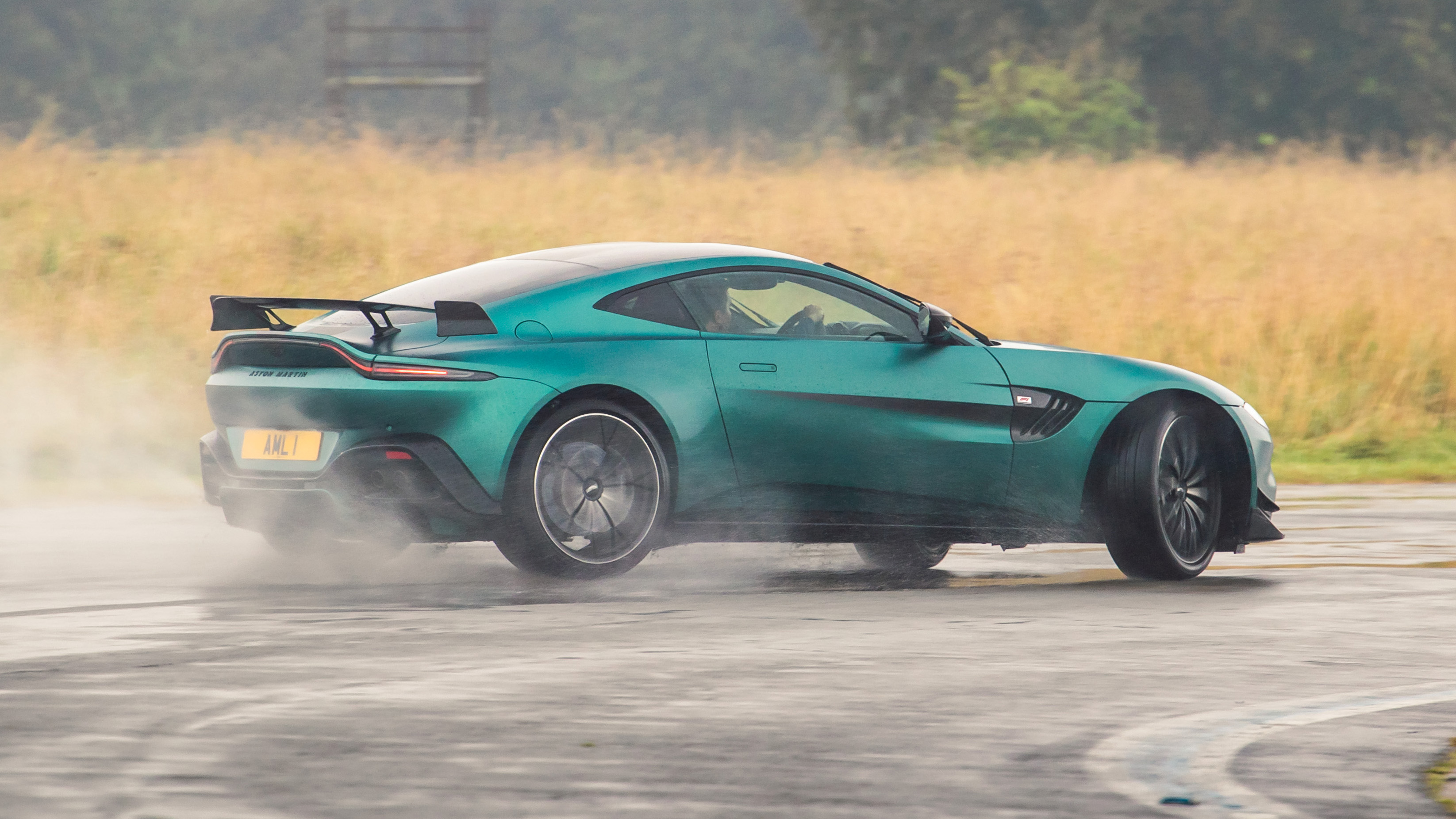 And yet today, the GT3 hasn’t got everything its own way - and the challenger comes from an expected direction, with a completely different delivery than you might assume. Because the Aston Vantage F1 Edition has turned out to be much more than a wing and some marketing. It’s a serious player. Which, I have to say, is a pleasant surprise. There are, of course, easy comparisons to make here. Both are pretty sportscars, both with around 500bhp (the Aston slightly more, 528 plays 503bhp), both with 0-62 times around the 3.5 second mark and with top speeds that lightly graze the underside of the double tonne. The Porsche is almost imperceptibly quicker according to the watch, with a slightly bigger naturally-aspirated flat-six engine than the twin-turbo V8 Vantage, and a much slimmer waistline. According to the official stats, the GT3 is 135kg lighter than the F1 Edition Aston.

The GT3 is the usual track-biased Porsche formula. There’s a half ‘cage in here, a herd’s-worth of whatever Alcantara comes from (sexy Polyester, really), and plenty of tactility despite serious intentions. The rigidity Olympics isn’t a thing, but if it were, the GT3 would win gold medals all day. Even embracing a mild hump, the GT3 will merrily pick up a wheel and dangle it for all to see. Which suggests it shouldn’t ride at all, be harder than a marble worksurface, but it isn’t. And quite how Porsche has managed to stuff actual suspension travel into a wheelarch gap so tiny is probably something to do with pocket dimensions and Doctor Who, because the physics don’t seem to fit into the space.

The Aston on the other hand, feels big in comparison. The interior is more bulky and cosseting, leathery and thick, the view with way more bonnet in it than the rear/mid-engined Porsche. The ride is, initially, softer. So far, so Vantage. But this is where the F1 Edition seems to make strides because like I said, this isn’t just a weak-tea aping of the F1 safety car. It's structurally stiffer than any previous Vantage - especially at the front to increase steering feel - the springs are stiffer at the back to eke out grip, and the adaptive damping has more range and fluency. There is aero, whose invisible caress apparently increases downforce by 200kg at top whack, though I swear I could feel it work at half that. There’s not a huge amount more power than standard - some 25bhp - but the car feels snappier, and the gearbox has more defined changes than the sometimes slurry shifts in a regular car. In the world of very special editions, these seem like small modifications, but they revolutionise the Vantage.

Where the standard car feels, on occasion, a bit lazy, the F1 Edition turns, steers and grips with more authority. Even in the streaming wet. Yes, you can still provoke it easily enough, and that 505lb ft of torque will let you surf the gearbox more readily than the Porsche, but there’s more confidence in the F1 than in the vanilla Vantage. The steering still hasn’t got the clarity of the 911, but it does a decent job, and you get out of the F1 thinking ‘I wasn’t expecting that’. Which is a huge compliment. It’s better in all the right ways, especially on track. Although that rear wing is very much a matter of taste. Effective it might be, but I absolutely hate it. Too pretty a shape to be sullied with a technical-looking board, in my opinion. The 911 wears it’s aero-addenda better, but that might just because it commits fully to its gooseneck plank - either that or I’m just more used to seeing big wings on 911s.

The GT3 is a scalpel and the F1 Edition is a cleaver. Both cut, and you wouldn’t want to get into a fight with either

Of course, it’s here that I could roll out the usual comparisons; the 911 is surgical where the Vantage F1 is a bit of a hammer. But a better one might be here is that the GT3 is a scalpel and the F1 Edition is a cleaver. Both cut, and you wouldn’t want to get into a fight with either. But they are very much apples and oranges when it comes to the driving experience. You can approach a corner a gear too high in the Vantage and it will drag itself through, bellowing like a bull. The Porsche doesn’t like to be in too high a gear, but loves - absolutely adores - revs, so you can accelerate all the way through an arc and there always seems to be more elevation in the revcounter. The Aston wants to oversteer earlier, but in my hands at least, it’s easier to control than the Porsche, which seems less keen on messing about unless provoked with intention. Both have more grip than you think, especially from the front. Both are, it has to be said, massively good fun on track. That might seem a bit trite given what we’re driving here, but generally road-biased cars don’t tend to work very well on a circuit. Compliance, comfort, useability - these are not things you need from a dedicated track machine, and yet here are two cars that can cope with both. You’d still get eaten alive by a Radical on a twisty circuit, but there’s a depth of ability from both cars that’s actually quite rare.

A verdict is a tough one, but essentially comes down to personal preference. I want to be able to have Aston keys in my pocket, because there’s a romance about the marque that appeals to me, and this iteration of the car lives up to the hype. Seemingly small changes having totted up to a car that suits me much more than I thought it would. Even though it didn’t feel the absolute fastest on the circuit, it was fun. I laughed while driving it, and that’s something that doesn’t happen that often. On the other hand, the GT3 needs to be tracked to appreciate the depth of its ability, and I’m not really a trackday enthusiast. But holy hell, when you get it right in that GT3, nail that corner just so, feel that front-end grip and hear that motor rap its pistony knuckles on the limiter, you remember why the reputation is so well deserved. And you wonder why you don’t do more trackdays.

There is an argument that the F1 Edition is what the Vantage should be anyway. And that’s probably right. But the Porsche is a good chunk cheaper (as long as you stay off the options list), and you simply cannot deny the way this car has been engineered; it’s bone-deep from the beginning, rather than the excellent evolution that is the Vantage in this guise. Heart says Aston, head says Porsche. Gah. It’s a good thing bank balance says neither, really. 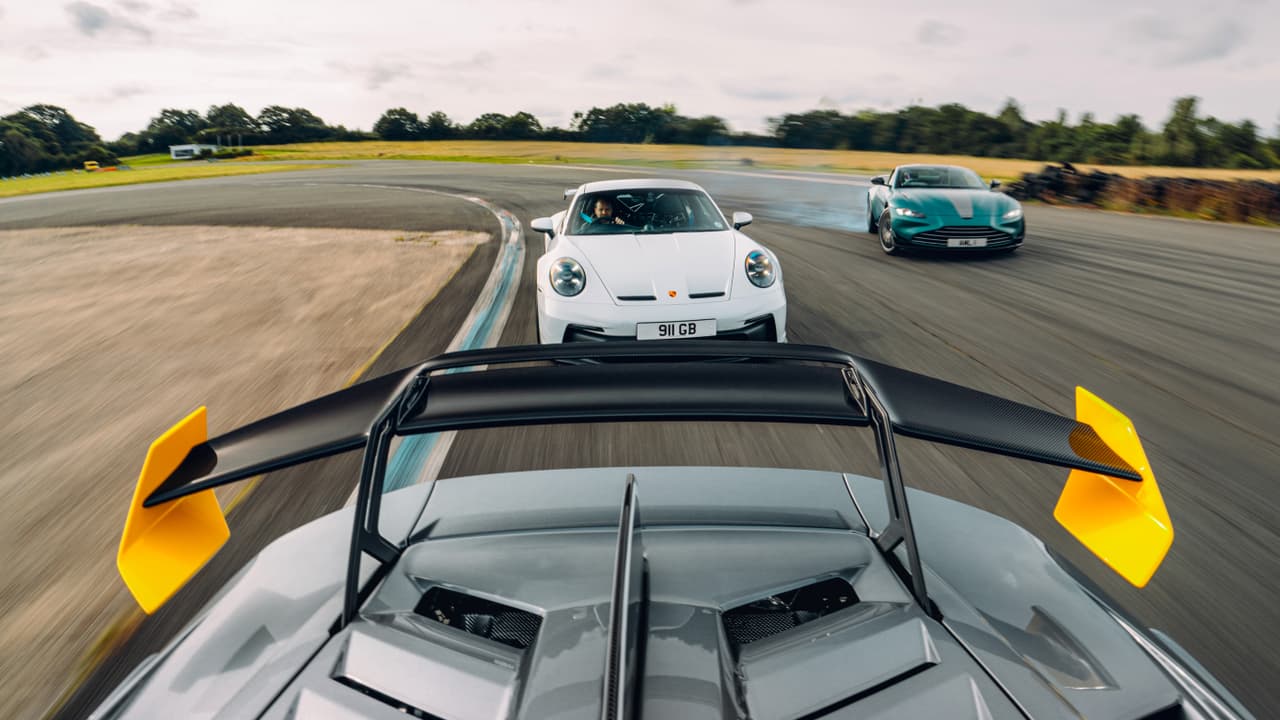