Hitting 300mph in a road car. What are the challenges? Is it even achievable? The current fastest speed in a road car is 270.49mph. It’s held by a Hennessey Venom GT, only 2.63mph above the Bugatti Veyron Super Sport, and achieved in only one direction. Clearly, at these speeds, adding another 1mph is difficult, so how likely is it that their next-generation cars – the Chiron and Hennessey’s F5 project – will be able to add another 30mph to that?

Indeed, is 300mph even on their radar, or is it a step too far? At 300mph (482.8kph) 100 metres would take 0.746secs. If it happened in a stadium, you could barely turn your head fast enough to keep up. Over to Wolfgang Dürheimer (outgoing Bugatti CEO) and John Hennessey (founder of Hennessey) to tell us more... 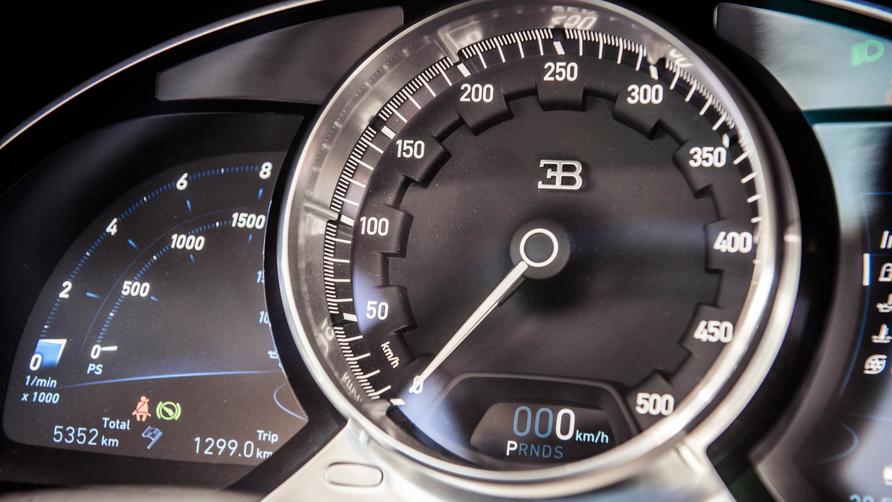 So, Wolfgang, what would you say are the main challenges of going very fast in road cars?

Well, when you are out to break new ground in an area where nobody was so far, you cannot 100 per cent predict the problems you will face. But it starts with the tyres, because at that speed you have a stress load on the tyres, especially on the surface, that is immense. Once again, we are working with Michelin – I think we are their most challenging tyre-development partner – but in the whole of Europe, we did not find a test bench to cope in terms of durability and high-speed capability.

We actually found a bench in the US that is used for aircraft tyres, and it’s been used to extremes to make sure the tyres are stable enough.

At high speeds, aerodynamics and power are very closely related. To go fast, you need the power of the engine to break the barrier and to compensate for the aero drag you build up – it’s like moving a bookshelf through the air. Aerodynamics on the Chiron took all the computational power we had in the Volkswagen Group, because when you approach 400kph, life, in driving dynamic terms, gets very demanding, and it takes a lot of effort to develop the aerodynamic balance so the car is predictable and safe in all circumstances. 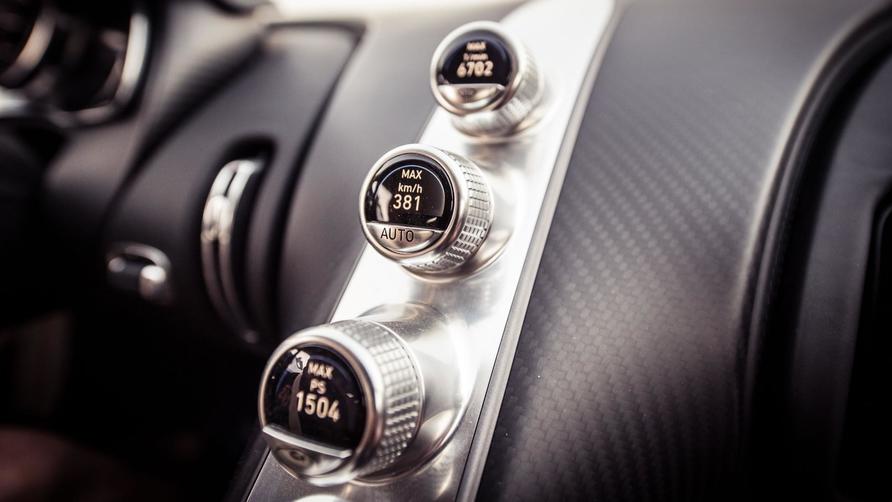 Can you model everything on computers?

Not everything. When you are at these limits, pushing the boundaries, you don’t know what you might find, so it’s important not just to look at computers, but to drive and test the car. Let me give you one example. We were in South Africa to do high-speed tests with the car in its final design, and we realised when we went at very high speeds for a longer period of time the single-beam lightbar and carbon-fibre parts at the rear started melting due to the extraordinary exhaust heat – approximately 1,000 degrees Celcius when it comes out of the pipes.

So we had to develop an air duct on the outside of the exhaust that ejects the hot gas out about 80cm further behind the car, and then it was fine.

The pressure within the engine must be huge?

It was quite a challenge to add 50 per cent on top of the Veyron’s 1,000 horsepower from the same displacement. To go 400, don’t start below a thousand horsepower and to go, let’s say, 450, don’t start below 1,500bhp. You will not make it. There are thousands of pieces in this engine, and they all need to sustain the stress load – we have to bring one cubic metre of air per second through the combustion chamber and out again. But we knew we needed this power to approach the 450kph limit.

While the car will remain limited at 420kph [261mph] for public roads, we will try to do another world speed record for street-legal cars most likely in 2018. This will happen under controlled conditions on our test track.

And 450 is an achievable target?

It could be possible, but we don’t know yet, we are still testing.

Are you looking beyond that as well? Or is that the line in the sand?

Nobody draws a line in the sand, I think the race goes on, and when someone crashes the 450 barrier, someone will try 451 a year later. But in this game, you cannot predict what is going to happen. You have to be careful, control the conditions, have the right air, wind, road conditions. But this is what we like to do, and it’s the big factor of differentiation in Bugatti, that we do this and tell our customers what the cars are capable of. 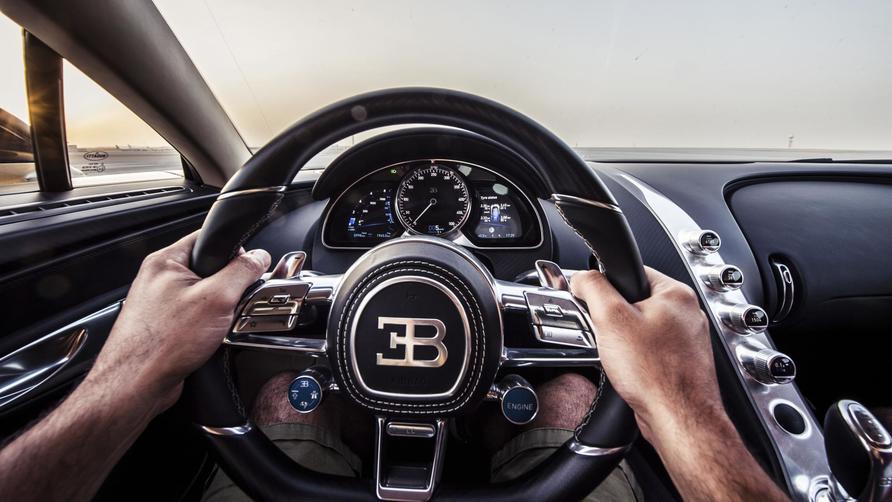 Power, speed and lap times are what sells.

But the Chiron isn’t a lap-time car...

No, but the car has its own rules, and on a track like Le Mans where we have an ultra-long straight, this is the El Dorado for a Bugatti. Fast and long turns are our domain.

How much does being first matter? How important is it to have a rival?

Of course it’s good to have competition. To only beat yourself is not what we are looking for. But is it important for us to be number one? It’s ultimately important for us, because we are representing our customers, and our customers are number one wherever they show up. I always say if you come in second you are the first loser.

Will you do the high-speed runs at Ehra?

Ehra is a playground for us – it’s like heaven. We have the ultimate straight and predictable conditions – we know what the wind’s doing, and the track is right in front of our door. 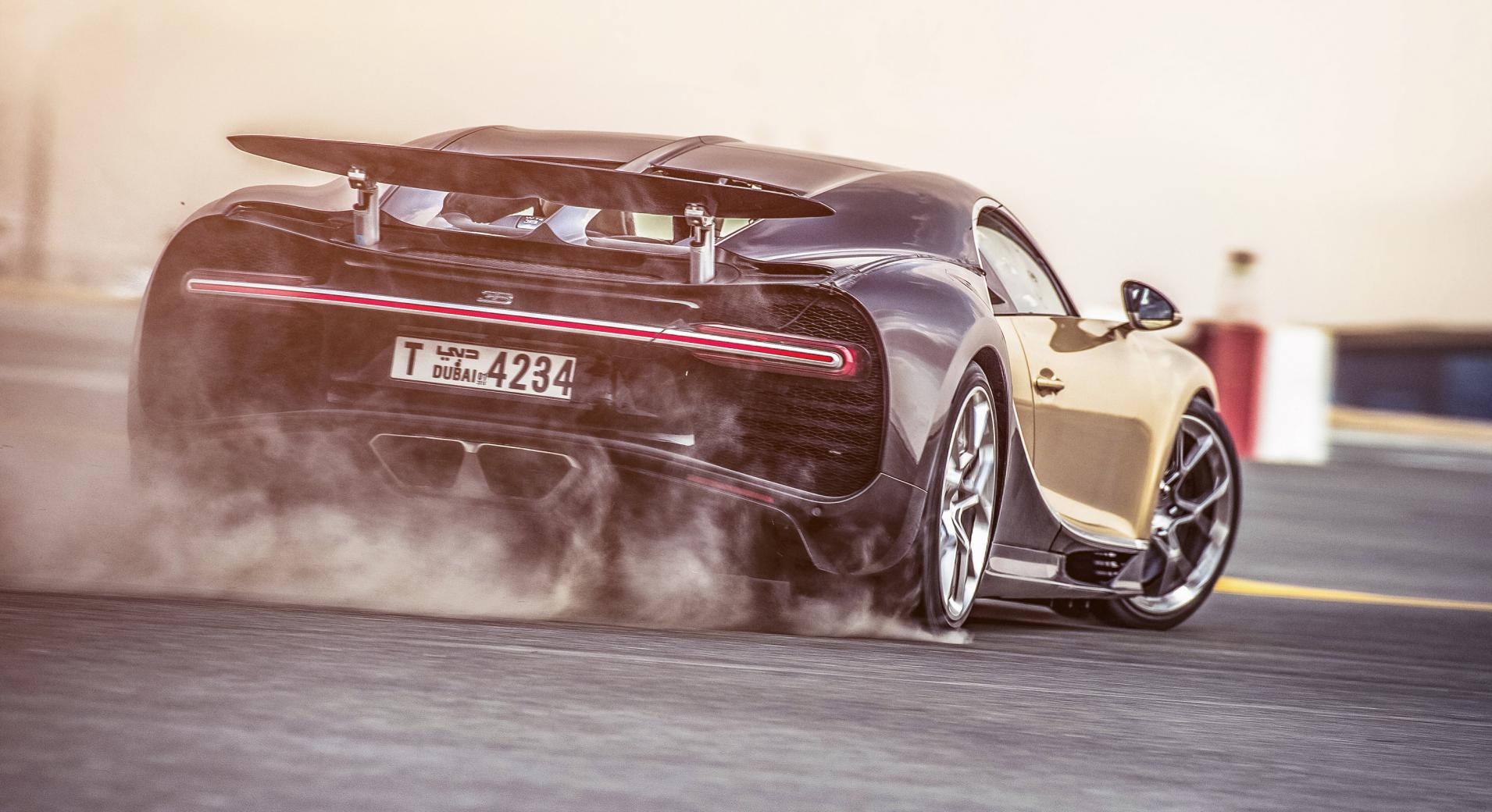 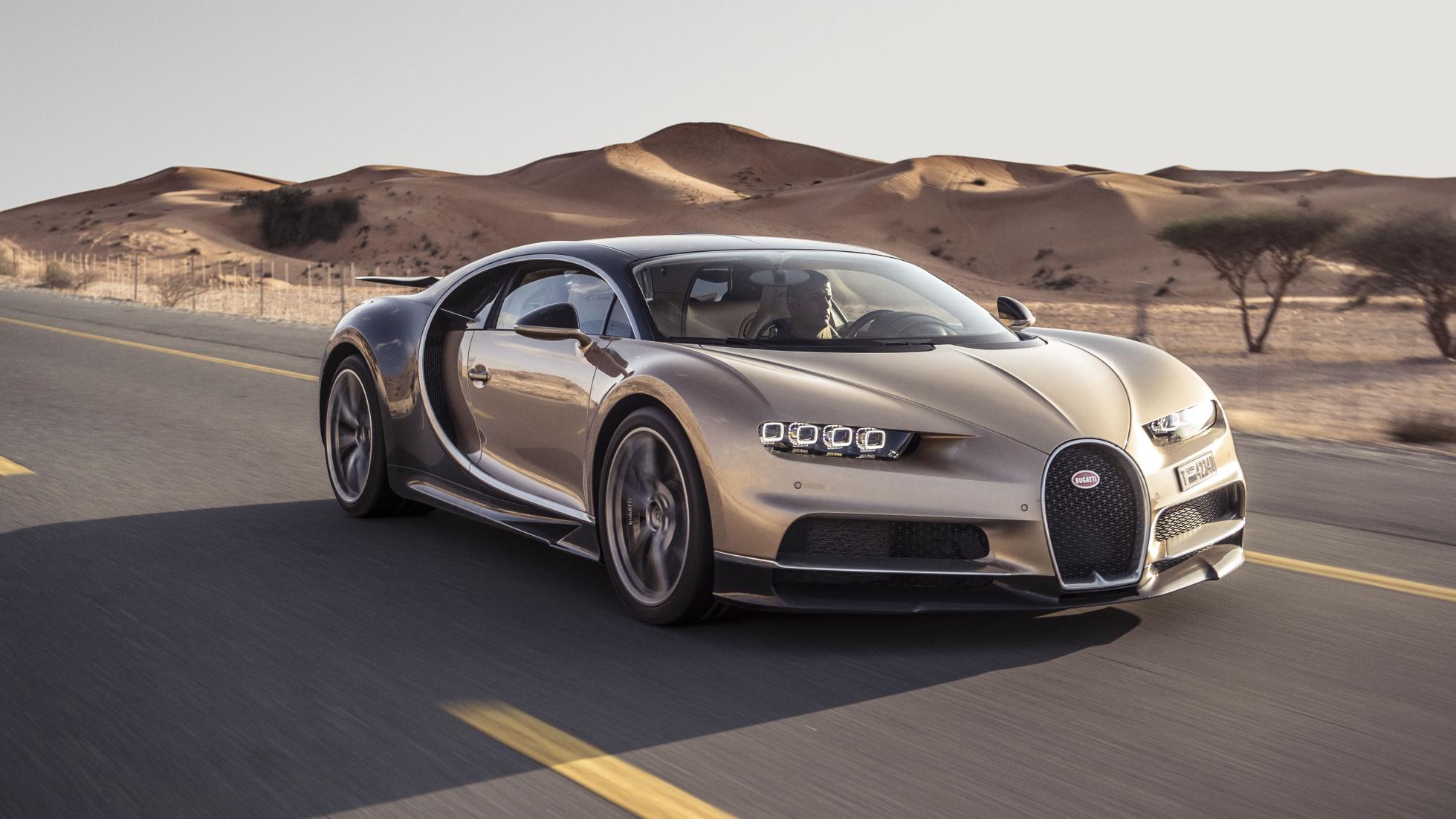 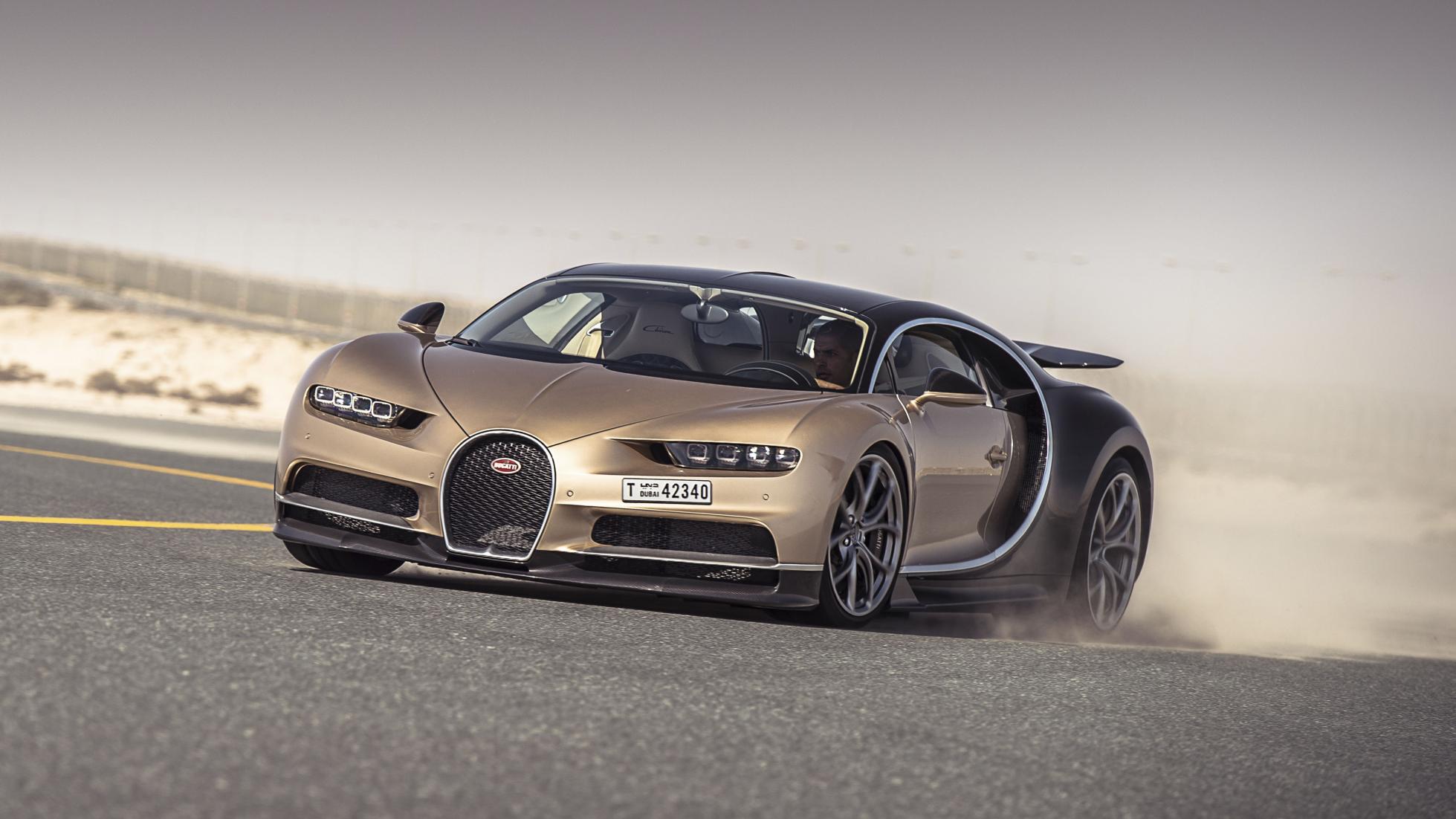 Is 300mph a possibility for the Chiron?

No, I don’t think that’s a possibility for the Chiron in its existing shape and pattern.

But it must be a barrier some customers have mentioned to you?

Yes, but luckily we are living in a world of kilometres not miles, and today we are talking about reaching 450.

Some customers asked me whether we are approaching it, but I have no answer for this at present... 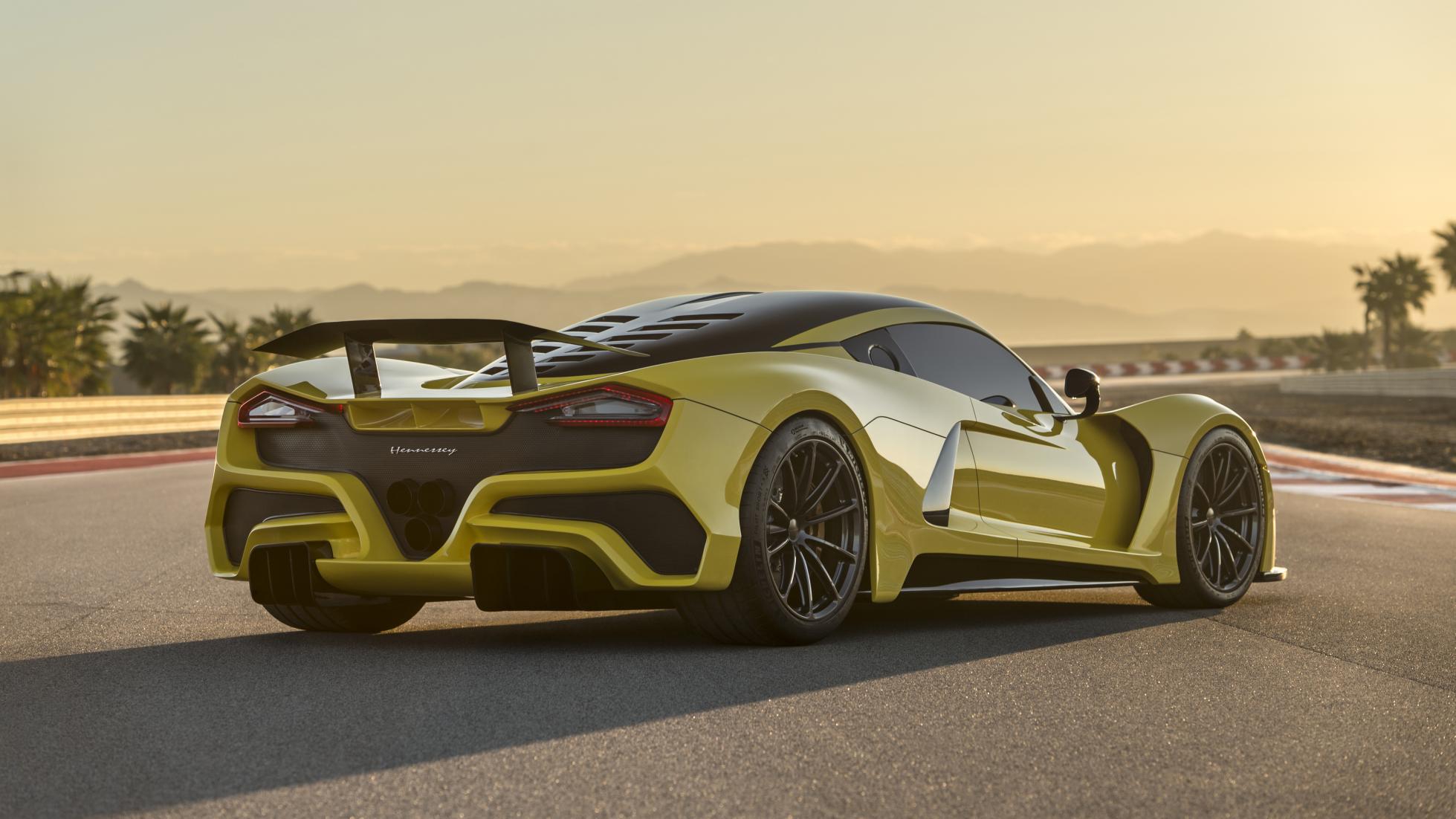 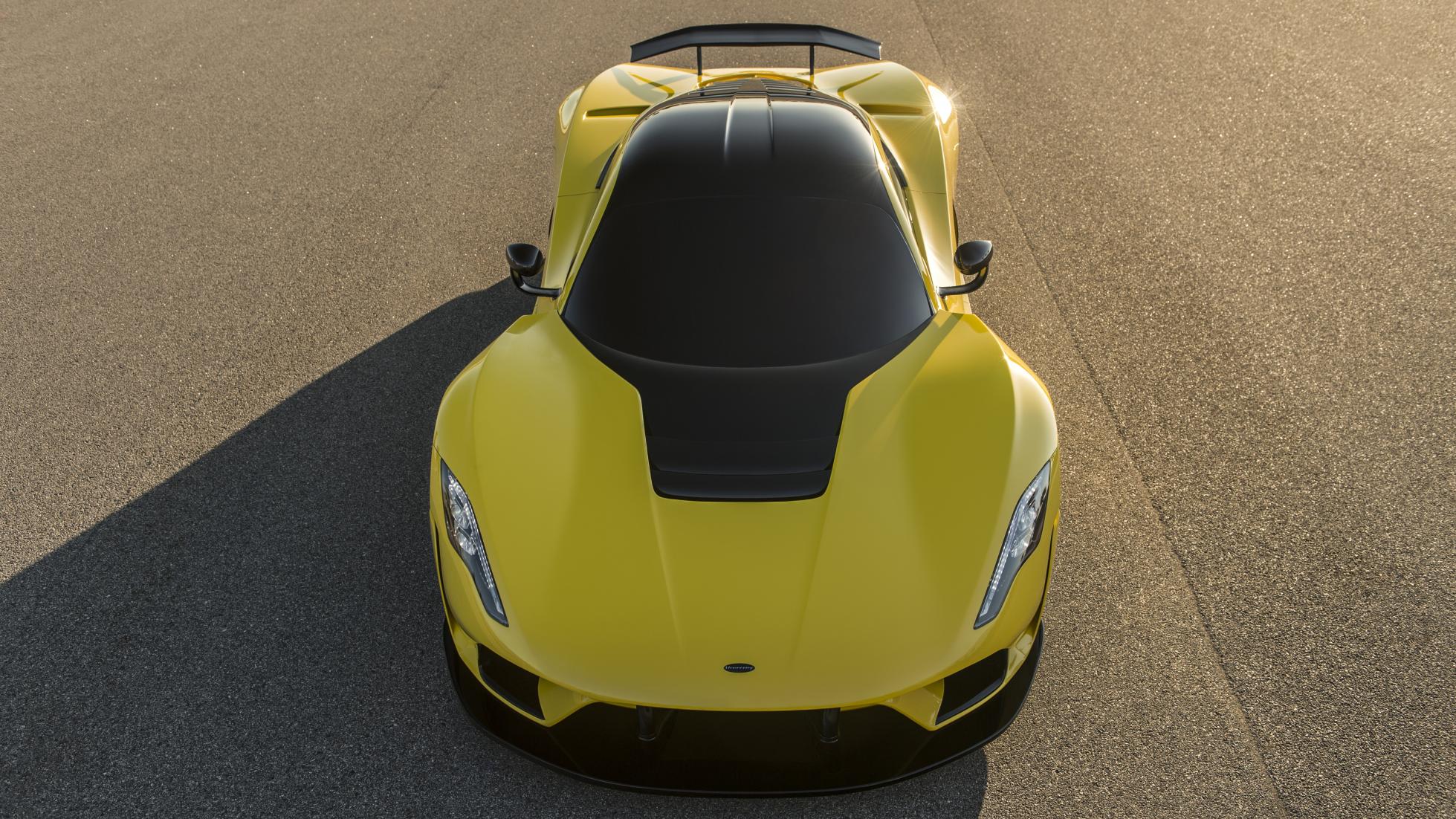 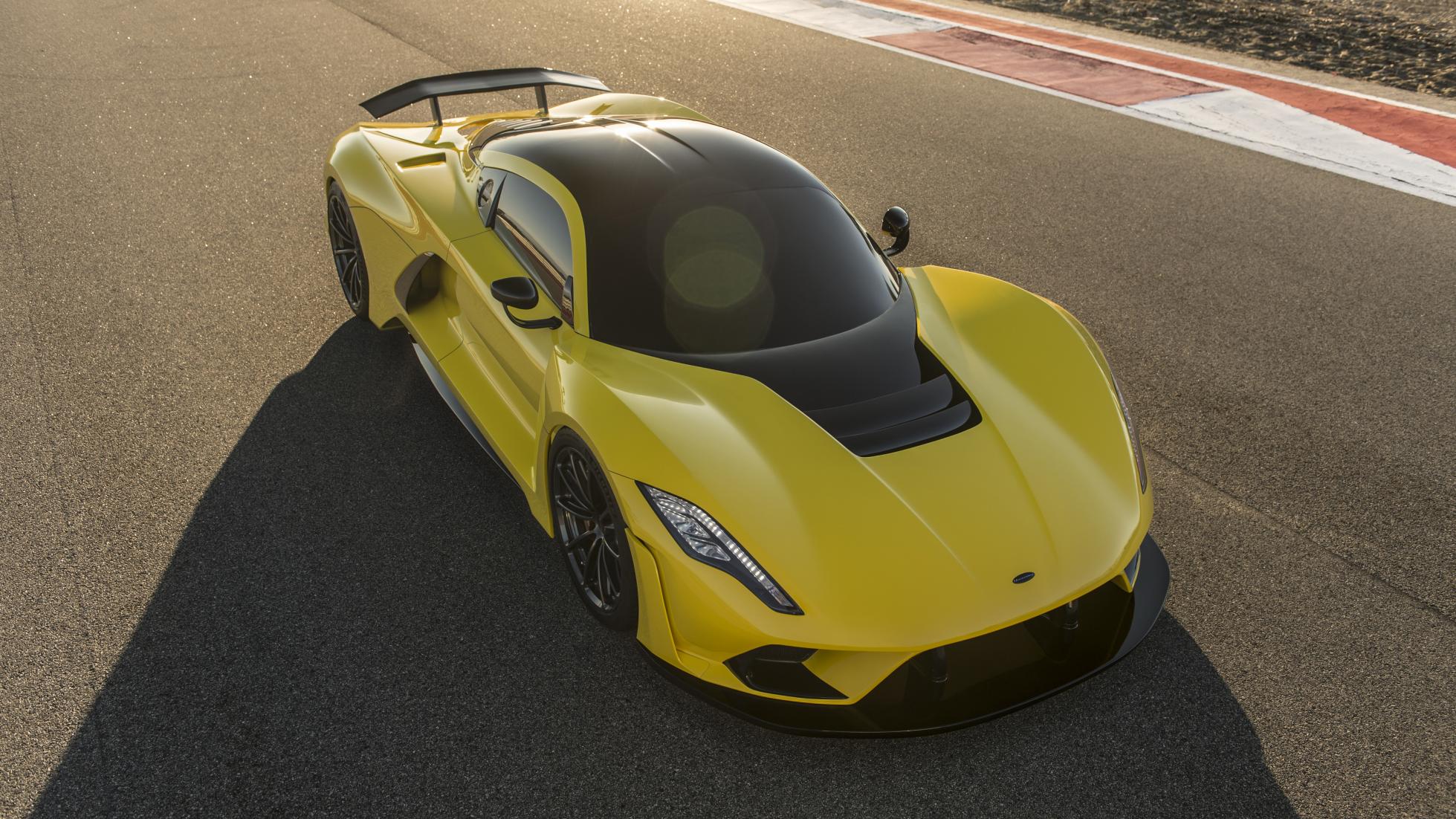 So, John, what would you say are the main challenges of going very fast in road cars?

First, there’s the consideration of tyres, but I’m not too worried about that because I’ve got a car that weighs less than 1,400kg, so I’m not working the tyres as hard. So, for me, aero is most significant. When we ran 270mph in the Venom GT, the drag factor was 0.44Cd – like a small pickup truck. 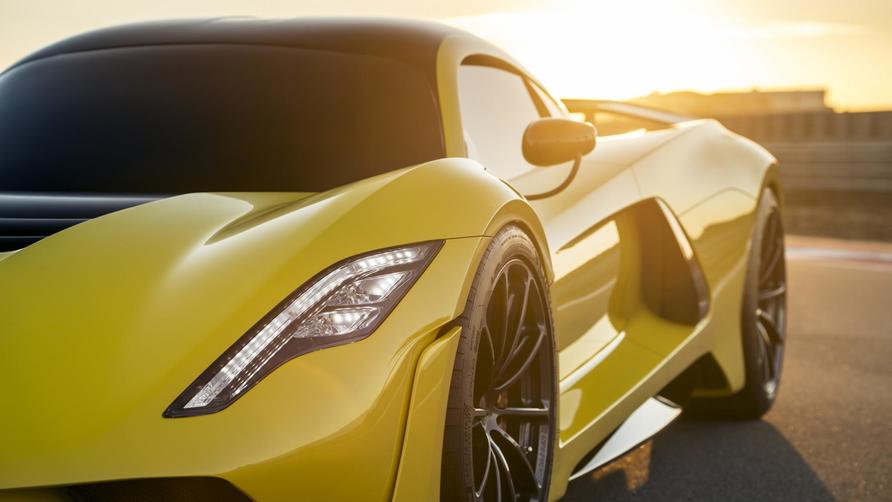 If we wanted to get the Venom to go 300mph with the drag it has, we’d have needed 2,500bhp. The goal for the new car was to go under 0.4, but it’s actually come out way better than that.

The smallest details make a huge difference on whether you’re going to be able to do 250mph or 270. On the Venom we played with many designs for the rear diffuser, and they had huge effects, changing the aero balance, putting too much heat in the tyres and so on.

Was that using computer simulations?

Yeah. The computers are pretty darn good. Nine years ago, when we first did Computational Fluid Dynamics on the Venom GT, they said that with 1,200bhp the car would go 272mph, and when we had to shut down at NASA at 270, the car was still accelerating, there were a few more mph in it – the drag and thrust would have equalised at about 273 to 275. Now they’re even more scarily accurate. But for every one thing we know, we’ve tried 10.

How about the engine for the new car?

It’s to be determined. It’ll be turbocharged – twin turbos are easy to do and package. My youngest son said why not put four turbos on it? Well, we can, but it’s a little more complicated, and I like simplicity. 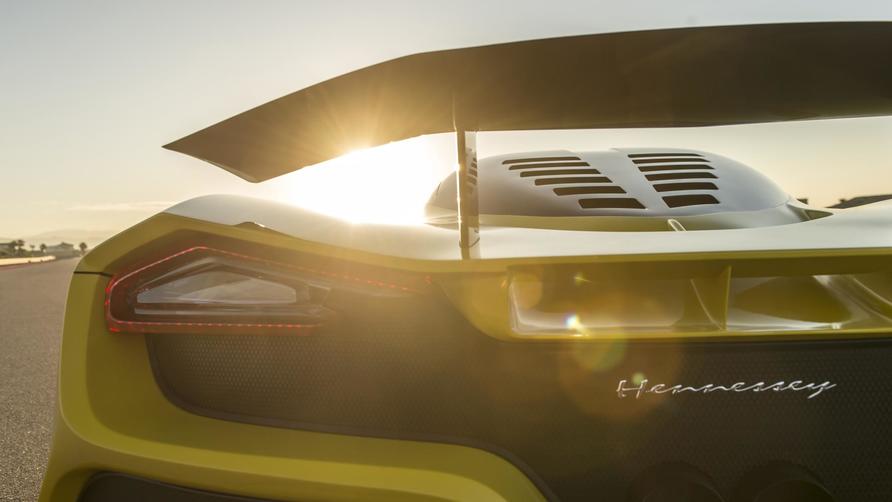 How much power will it have?

I do. And I’m sure the Bugatti guys do too. They have a different set of challenges, but I think my car’s potentially capable of 500kph [311mph].

Where can you go to do it?

Maybe we have to go to Bonneville, but that has its own set of challenges because you’re running on salt at 4,000ft of elevation, with weird weather, and you can spin the tyres at 200mph. The NASA runway is 3.2 miles and that’s just not long enough. When we ran 270, it took 2.4 miles of acceleration and 0.8 to brake. Closed roads are tricky because the smallest bumps at those speeds would potentially be catastrophic. There’s often a high crown, it’s narrow and there are critters – and a critter strike at high speed is bad news.

My youngest son said why not put four turbos on it? Well, we can, but it’s a little more complicated, and I like simplicity.

How important is it to you to have competition?

If we go out and do a run, that’s cool, but it’s not nearly as cool as when you’ve got the road runner and coyote together. Then we’re talking about the 300mph club, and that’s cool. It’ll be a fun next three to five years. I’ve heard Bugatti is going to go out and do a high-speed run in the Chiron next summer, which I’m assuming will beat our 270mph. After that we’re going to play our game and hopefully we can have some leapfrog along the way.

Do we intend to do 300mph next year? No. We’ll do it when we’re ready to do it, and if Bugatti gets there first, then congrats to them. It’s difficult to do. If they get to 300mph before us, we’ll end the game at 500kph.

Will that be the end, then?

Are you asking if there’ll ever be a 400mph club? No way. At least not for another quarter of a century. I was looking at the history of 200mph and you had the Porsche 959 and Ferrari F40 and then Ruf. Now everything is capable of 200mph. So 300mph is the Mount Everest.

I’m sure the Merc Project One will go 6:30 around the ’Ring and people will talk s**t about it, saying they did it with cheater tyres, but that’s why I like vmax – you can’t argue against a vmax run. It’s the absolute fastest, and I don’t like qualifiers: the fastest at such-and-such track, or the fastest- accelerating to such-and-such speed. 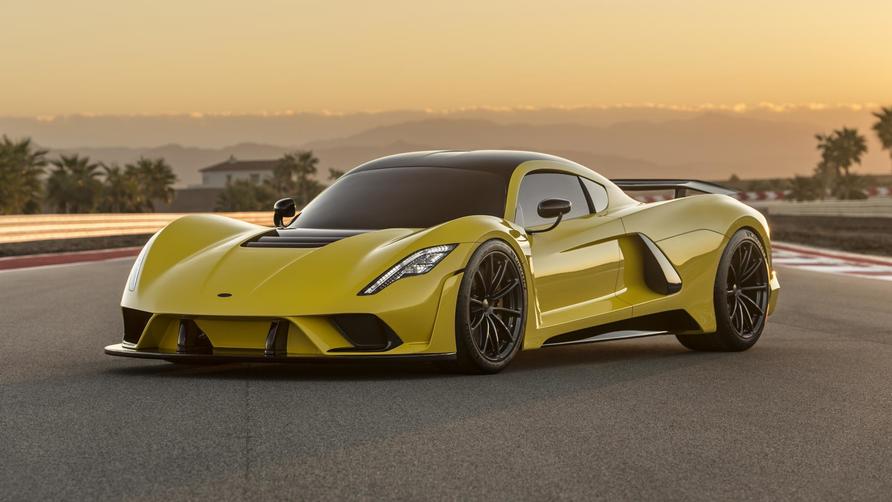 And what of Koenigsegg? Top Gear asked company boss Christian von Koenigsegg for his take on the lure of 300mph...

Christian, when I drove the Regera last year, you said to me that 250mph is fast enough?

250mph is fast enough for most people. It’s how you arrive there, how quickly, how safely, the emotional value, that’s what matters. Having said that, the Agera RS, with the one-megawatt upgrade will reach 270mph or something like that.

Does that matter to your customers?

To some, yes. We’re not bothered, but the customers are and we’ll support them. We’re not chasing it – it becomes more irrelevant, because these are road cars, not dragsters. 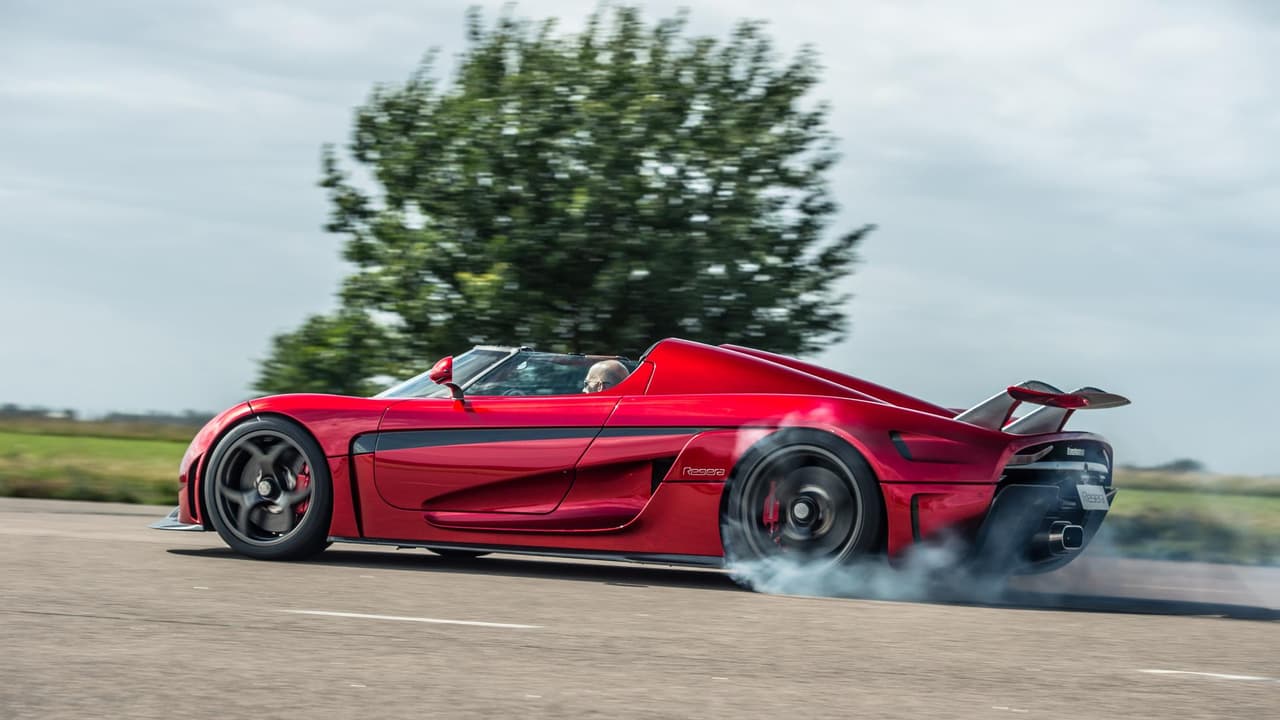