Ferrari, Maserati news - The future of Ferrari and Maser - 2010 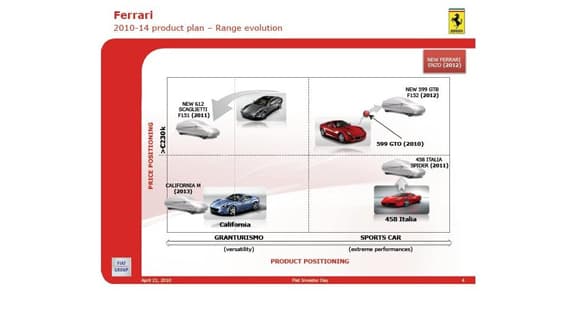 Maserati has declared that it'll make an Italian rival for the Jaguar XFR and BMW M5. Well, that's not quite what it said. It said it will ‘extend luxury market coverage by entering the high-end E-segment, offering a new product package with specific contents in order to exploit Maserati "DNA"'.

There. Bet you're glad you've got your old TG pals standing by to translate dry industry jargon-speak into a mouth-watering, tyre-smoking prospect for saloonatics.

Having dropped the bombshell, Maserati remained annoying schtum, beyond indicating that the car will come in a couple of variants costing between £50k and £65k. As for timing, we know only that the intention is to launch in or before 2014.

Before that there will be an all-new Quattroporte, the company said. And sometime after 2015, the GranTurismo and GranCabrio will be titivated, so Maserati will maintain a four-car range: new big saloon, very big saloon (that's the Quattroporte replacement), coupe and cabrio.

You might be wondering why on Earth Maserati has revealed its plans. Well, today the entire Fiat-Alfa-Lancia-Abarth-Ferrari-Maserati band of brothers has been opening up the locker marked ‘secret' to a group of important men in suits from stock markets round the world. The idea is to talk up the share price, and be able to get hold of the capital they need to do all this development.

So, just because we like keeping the best until last, here's what Ferrari is up to:

An all-new replacement for the 612 Scaglietti arrives next spring. Here's hoping it'll be less of a controversial looker than the current car.

Then in the second half of next year, the 458 Spider arrives. Wey and indeed hey.

For 2012 there's a heavily revised 599GTB. In fact, Ferrari says that all models will be on sale for four years, then get a mid-life going-over so they can continue for another four years before the full replacement. That's why Ferrari says the California will be modified in 2013.

Now just because you couldn't have predicted all of those upcoming Ferraris, don't tell us you didn't just get a bit of a tingle reading that they're actually coming.