Why you should be excited about the RR SVR 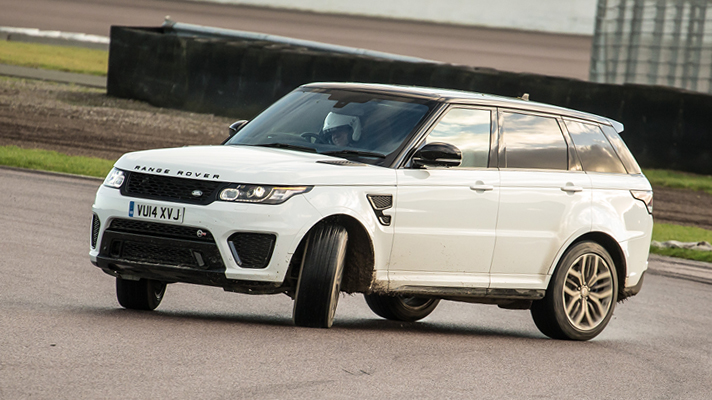 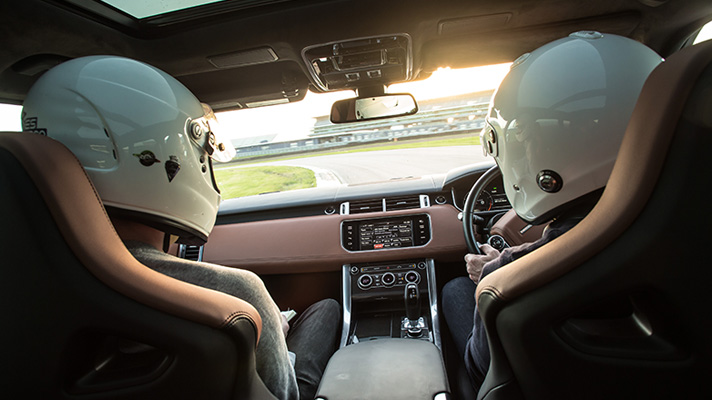 No matter how many times Mike Cross - Jaguar Land Rover's chief vehicle engineer - provokes the new Range Rover SVR into a whopping great drift, the fact that I'm having to look at our direction of travel through one of its conservatory-sized side windows remains unsettling.

This is a two-tonne SUV, on the lock stops with the rear end penduluming from side to side. Admittedly, we've seen this kind of hoonery in fast Cayennes and BMW X5Ms. But this is a Range Rover.

However this isn't your standard Range Rover Sport. It's the first production car from JLR's Special Vehicles Operations (SVO) division and the first product to have a SVR badge pinned on its bumper.

SVO is a newly formed squad tasked with developing ultra-fast derivatives of existing Jaguars and Land Rovers. It's a long-overdue fracking exercise into the well of money from which brands like Overfinch, Kahn and Prindiville have been profiting from for years. But now Land Rover is doing itself, bowing to the demands of people who want faster, slightly more blingy Range Rovers and don't mind paying a premium for it.

The Range Rover Sport has never been an understated thing, but thankfully the aesthetics of the SVR haven't taken it too far the wrong way. The way of Cheshire, if you know what we mean. There's a new front bumper that's binned the fog lamps to make room for larger air intakes to improve cooling, a redesigned grille, flared wheel arches with faux air vents, underfloor carbon fibre air ducts for brake cooling, a new rear bumper/diffuser combo and a functional rear spoiler that's helped nudge the top speed to an electronically limited to 162mph.

Inside, the leather cabin remains as luxurious as before but now with added carbon. The centre console, dash, steering wheel and door panels are covered in the stuff. But the biggest change is that the RRS's big, pillowy captain's chairs have been tossed out and replaced with firmer sporting seats that mimic the design of F-Type's. The rear seats have also been decked out in a similar fashion.

The party piece is up front, under the bonnet. It's the 5.0-litre supercharged V8 from the Jaguar F-Type R, making 40bhp more than the current RRS V8, and 502lb ft of torque goodness. Connected to an uprated version of ZF's eight-speed auto gearbox, 0-62mph is dusted off in just 4.5 seconds. But if you performance benchmark of choice is Nurburgring times, this Range Rover has one. What's that noise? Oh, it's the sound of James May being sick. The time. 8 minutes 14 seconds, making it the fastest SUV ever to have lapped the 12.9-mile Green Hell.

But has all this track nonsense and ‘Ring pounding beaten the RR's off-road identity out of it? Can it still get down and dirty? To find out, we got in the passenger seat (we're not allowed to drive it until next year) and told the driver to find the most inhospitable holes, muckiest trenches and deepest wading pools he could at Rockingham Castle to see if it was up to the test.

The first thing that you notice with the SVR is the noise. There's a new exhaust system to help the re-mapped engine breath a bit better. But the quad exhausts - which also look badass - also house electronically controlled valves. At low revs two of the four pipes are closed, but under increased loads and above 3000rpm, the valves open. Or, you can press a button on the centre console that keeps them open all the time. We strongly recommend doing that, as anyone familiar with the F-Type V8 soundtrack will recognise the delightful tune that SVR makes.

With a strong prod of the throttle a guttural bassy bwaaarp runs its way all the way to the red line. But the fun really begins when coming off the throttle. This effectively lights the touch paper to a KISS pyro show in the backbox, as bangs, crackles, pops and barks fire from the exhaust. Previously, this was something you and one lucky person in the passenger seat of a V8 F-Type could experience. But in the SVR, with its three rear seats and big boot, means little Jimmy, Timmy, Tilly and the dogs can all enjoy the aural experience too.

With the same terrain response system as any other Range Rover, traction isn't an issue as power is briefly sent to each wheel for an exploratory nibble, before it decides on the best setting and then fires itself across the landscape at a phenomenal rate. This combined with that soundtrack, is something special. If you close your eyes you feel like you've gone rallying in an F-Type. It's fantastic.

Although the car is 70kg lighter than its Sport siblings, it hasn't lost any off-road gubbins that can make it crawl, wade and scramble itself over the rough stuff with impeccable grace and aplomb. With permanent four-wheel drive, low range, and an electronically controlled multi-plate clutch in the centre differential, a quick twizzle of the terrain knob to one of the more extreme modes sees the SVR rise on its air springs (you try that, Mr X5M), display all kind of graphics about which axle you're going to break first, and simply trudges its way down a slope thanks to Hill Descent. No slip, no fuss, just relentless composure.

But what about on track?

Well, aside from stiffer bushes on the subframe and a new system that replaces anti-roll bars with a hydraulic pump to control body roll, there's actually very little new performance hardware in the SVR compared to the standard car. SVO has simply sharpened the performance by plugging in some laptops and turning the electronic components up to eleven.

The adaptive dampers are stiffer, the steering is heavier, the engine, gearbox and throttle have all been remapped, the electronic diff has been tightened up for track use and the torque vectoring function (which doesn't transfer torque across the axle but brakes the inner wheel instead) has been honed.

If you want proper track smarts, you need to spec the optional 22" performance Continental Conti Sport Contact 5 tyre for £2,400. This isn't Land Rover's preferred rubber, as it's not so good off-road, so they'd rather keep you on the standard 21" wheel and tyre. But if going fast on road and track is your thing, tick that box. And when you turn up the heat on the five-litre V8 and really get it crackling, boy the big SVR can hustle its weight well.

As the man with sign-off on all JLR cars, Mike Cross knows a thing or two about how a car should handle. So as I witness him do a tidy lap of Rockingham's handling circuit, it's incredible how light on its feet the SVR feels. The roll isn't half as drastic as you'd expect and it's pretty evident that this thing has spent 5,000 miles being developed around the Nordschleife.

With the systems turned off, Mike stomps on the six-piston Brembo brakes and chucks the SVR into a damp corner, and initiating a monster skid. You can feel all the computer wizardry under your bottom as the power is transferred from each axle to get the best traction out of the corner. However Mike toys with it to provoke it into doing silly things.

The SVR takes eight laps of track punishment with ease. Yes, it feels heavy, but not at all lost. If you've got the budget, SVO will build you a track-only Range Rover: it's a department open to any idea. But as a base car, the SVR is a fantastically characterful polymath. At £93,450 - a £12,000 premium on the 'standard' V8 - it's not cheap, but this could quite possibly be the only car you ever need.