The new Ferrari SF90 Stradale is a 986bhp hybrid supercar 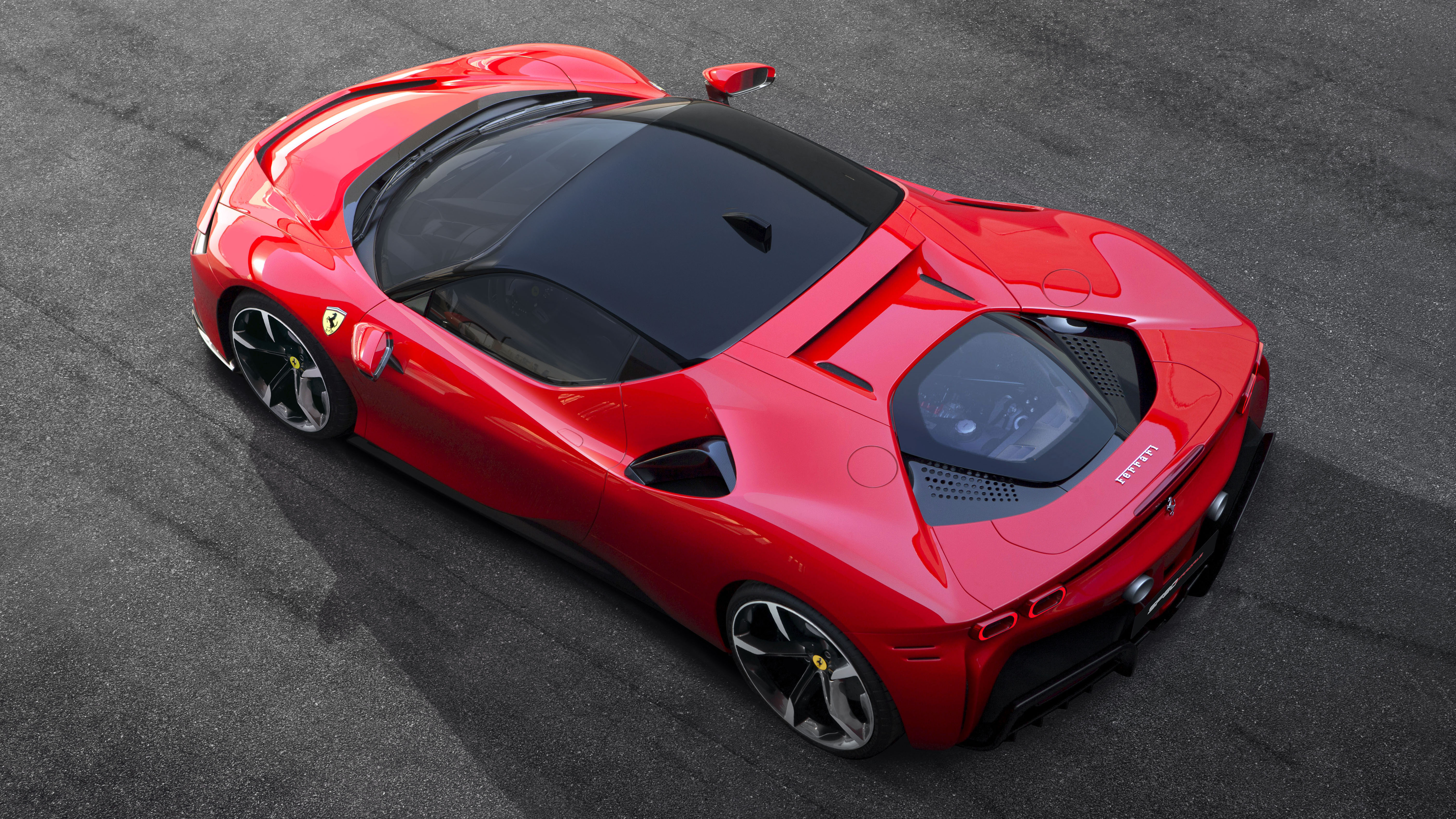 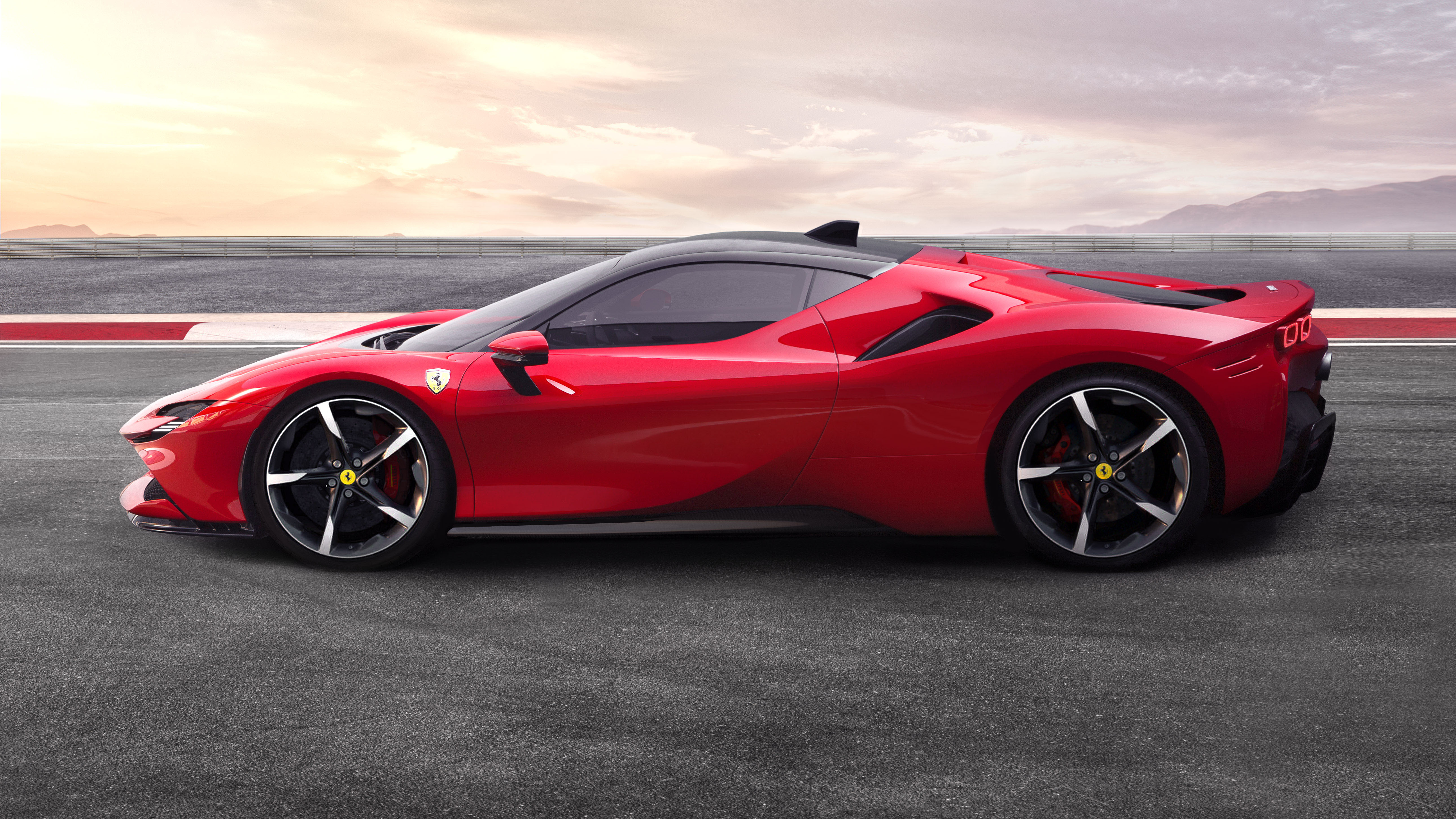 "When you buy a Ferrari, you pay for the engine and I’ll give you the rest of the car for free."

It’s one of Enzo Ferrari’s most famous proclamations, but the new SF90 Stradale stress-tests the idea of what constitutes a Ferrari ‘engine’ to the max. The company’s first series production PHEV – plug-in hybrid electric vehicle – the new car uses a heavily reworked version of Ferrari’s multi award-winning twin-turbo V8 in combination with three electric motors, one mounted on the rear between the engine and gearbox, and two on the front axle.

Naturally, this signifies the arrival of a whole set of new acronyms, including RAC-e – rotation axis control electric – which takes the concept of torque vectoring to the next level. Ferrari experimented with all-wheel drive back in the mid-1980s, and it’s finally here.

The ICE part of the equation produces 769bhp, the tripartite electric motors adding a further 216 for a total of 986bhp – or a more pleasingly rounded 1000 cv if you go with our Italian brethren. Either way, it’s a whole heap of power, the most any Ferrari V8 has ever ponied up, and it translates to a zero to 62mph time of 2.5 seconds, 124mph in 6.9 seconds, and a top speed of 212mph. All-wheel drive is clearly handy in these circumstances, whether you’re a purist or not.

Ferrari’s powertrain guys may have started with the F154 twin-turbo V8, but the changes are such that technical director Michael Leiters describes it as a ‘totally new architecture, with only minor parts carried over’.

Its capacity has been increased from 3902cc to 3990cc, due to a larger bore of 88mm. Intake and exhaust have been completely redesigned, and the cylinder head is narrower with an all-new central injector running 350bar. Internal fluid dynamics have all been optimised, the turbo assembly is lower, and while the exhaust sits higher – and exits above the rear bumper – the whole engine sits 50mm lower in the chassis for a reduced centre of gravity. There’s a much smaller diameter flywheel, and the exhaust manifold is made of Inconel rather than steel.

A high performance, 7.9kWh lithium ion battery sends power to the three electric motors, and even with the ICE switched off the SF90 can still hit 84mph. Ferrari’s control logic manages the power flows according to whether the driver is feeling holy or hedonistic, and splits it across four different driving modes, controlled by the steering wheel mounted eManettino.

‘eDrive’ is self-explanatory; using the electric front axle only, you’ve got a range of 15 saintly EV miles. ‘Hybrid’ mode is the car’s default setting, switching off the ICE if the circumstances allow, but still giving you access to the whole kit and caboodle if you want it. ‘Performance’ keeps the engine running, to charge the battery, and keeping the car fully lit. And ‘Qualify’ mode wrings everything out of every part of the powertrain, rinsing the three electric motors of their 162kW output, the control logic giving precedence to performance over battery replenishing. Leiters says there’s enough juice in peak power mode to lap any circuit in the world, including the Nürburgring.

Like everyone else at the super pointy end of the business, Ferrari is now a place that hires the best software people to go with the engineers. The control logics nexus that makes the SF90 Stradale even vaguely possible marries three primary areas: the high voltage controls that include the battery, RAC-e, MGUK and inverter, the engine and gearbox, and the vehicle dynamics systems encompassing traction, braking and torque vectoring.

You’ll recall that Ferrari is up to v7 of its side slip control algorithm, which gets cranked up another few notches here – if you can crank up ones and zeroes. Welcome, then, to eSSC, which oversees the torque distribution to all four wheels via electric traction control (eTC), a new brake-by-wire set-up which blends braking torque between the regular hydraulic system and the electric motors as well governing regenerative braking, and torque vectoring.

There’s enough juice in peak power mode to lap any circuit in the world, including the Nürburgring

The chassis, meanwhile, is all-new, and mixes carbon fibre (in the bulkhead) and high strength aluminium to improve torsional rigidity and create the sort of platform the hybrid powertrain demands. The SF90 Stradale has a dry weight of 1,570kg, pretty good considering all the extra gubbins – 270kg worth of gubbins, in fact.

Ferrari also claims massive progress in terms of aero- and thermal dynamics. The new car generates 390kg of downforce at 155mph, and the engine cover has been kept impressively low to maximise air flow. In fact the whole rear end of this thing is mesemerising.

The stand-out active aero feature is a twin-part rear wing that takes its learning from Ferrari's experience with DRS (drag reduction system) in Formula One. A fixed element incorporates the middle brake light, and is aligned to the mobile part in regular conditions. But that part – which Ferrari calls the ‘shut off Gurney’ – actually disappears into the body using electric actuators to close the lower blown area and maximise downforce. Upfront you’ll find an evolution of Ferrari’s vortex generators.

If it sounds complex, it is. So much so that it’s almost easy to overlook the car’s equally complicated, cab-forward shape, a form that demanded an unusually high degree of collaboration between Flavio Manzoni’s Centro Stile and the company’s engineers. Used to managing the demands of extreme aero, Manzoni has also had to get his head around the cooling requirements this incredible hybrid powertrain necessitates.

But old-school Ferrari signatures have made a comeback too, primarily the flying buttresses, and the rear end of the SF90 Stradale is a highly structured, quasi-architectural piece of work, with a remarkable split glass area. The images, as ever, don’t do it full justice. "It was a long, complex job," Manzoni says. But he also talks about uncovering a solution that finds the third way between a racing car and a spaceship, and that’ll do for me. There’s also a callback to the late 1960s 330 P3/4 in the rear part of the side profile.

Inside, Ferrari has introduced a 16in fully digital HD screen, with a curved surface. This is another iteration of the industry’s current ‘secret till lit’ obsession, and Ferrari has committed to a ‘hands-on-the-wheel’ philosophy and touch-sensitive, wheel-mounted switchgear such that you will rarely have to move your hands at all to operate the car.

This is a dramatic new HMI, and we hope it works: we never did get the hang of the wiper and indicator buttons on the wheel… The F1 driving controls on the central bridge have also been redesigned, and are set into a metal plate that references the open gear lever gate beloved of so many long-term Ferrari fans. It’s a nice retro touch on a car that in every other respect vaults Ferrari into a new era.

"We’re interested in cornering speed, acceleration, driving emotions…" Michael Leiters concludes, and we’re down with that. Ferrari is just set on delivering all those variables in a different way. Note also that the SF90 Stradale will sit above the 812 Superfast in the model hierarchy - one of five new Ferraris launched this year - but well below the LaFerrari replacement which lands in 2022. Think £400k...