Read the full interview, and our feature on F1’s youngest ever grid in this month’s Top Gear magazine

When the lights go out for F1’s curtain raiser in Melbourne this weekend, 19-year-old Lando Norris will become the youngest British driver ever to start a Grand Prix. He’s also the youngest driver on this year’s grid, which just so happens to be the youngest in F1 history. Not only that, he’s taken the seat vacated by veteran Fernando Alonso. But if he’s feeling the pressure, he’s certainly not showing it. Well, maybe a bit…

How does it feel, being so close to your first GP?

When I was young, waking up at whatever time in the morning to watch the Australian Grand Prix, I remember thinking ‘one day that’s what I want to do’. It doesn’t feel like that long ago. And now I’m here. It’s pretty weird to think about how time flies. And how you can progress so much.

I’m going to feel it a lot more when I’m on the grid in Australia, when the lights are coming on and we’re racing down to Turn 1. That’s the bit I really look forward to. But at the same time I’ll probably be the most nervous I’ve ever been, in those few moments.

Do you feel like the eyes of the world are on you?

Definitely more so, especially in F1. You get a lot more of that kind of feeling. But it’s not just outside eyes – there’s the whole team back at Woking, almost a thousand people. There is pressure – not just because I’m the youngest, but because there’s a higher possibility of people blaming things on my age. If I make a mistake they’ll say it’s because I’m young. I don’t want to be making little mistakes…

It’s an interesting time to be racing for McLaren, in this sort of reset period…

I joined McLaren two years ago, so I haven’t joined them in the best of times. It’s not like I have to worry about how we stay at the front, like Lewis did when he joined. There’s a lot more ‘How can we get back to the front?’ and ‘How can I make the most of these few years and make sure I’m the best driver I can be, for when those good times return’.

When did you start watching F1?

I must have been around six or seven. It was around 2005. I remember it more when Lewis joined McLaren, and the Alonso versus Hamilton season. Those are the first few races of Formula 1 that I can remember. I mean before that, when I was even younger, I actually wasn’t so interested in Formula 1. I was much more into MotoGP and motocross.

If I make a mistake they’ll say it’s because I’m young. I don’t want to be making little mistakes

Who are your F1 idols?

I haven’t had many F1 idols. Since I was four or five my hero has been Valentino Rossi, he’s the one I’ve always loved watching and supported the most. There are people in F1 who I’ve grown up watching, and I’ve been inspired by different parts of them – some have great race-craft or qualifying pace or personality. You don’t just want to idolise someone and be like them, you want to take little bits from everyone. But there are people I’ve supported more, like Lewis and Jenson…

Who are you really looking forward to racing against this season?

Nobody specific. Of course I would like to race against the top guys – Lewis, Vettel, Kimi hopefully. There are a lot of guys who hopefully I’ll be able to race against, although maybe not so much Mercedes or Ferrari this year. But everyone in F1 is very good, so whoever it is, I know they’re probably the best I’ve ever raced against. I raced against George [Russell] last year. We had a couple of good moments, Monza was the best one, but not as many as I would have liked!

How will you feel when a Lewis Hamilton or Sebastian Vettel appears in your mirrors? Do you think of them as people, or do you just see a car?

I don’t know! I’ll be able to tell you once I start doing it. A bit of both maybe. I respect the drivers so much, so if I do manage to overtake Lewis, in any way, then that will be a cool thing to say. I doubt I’ll be racing them much at this point in the season, so that’s something I have to look forward to in the future.

When did you get your driving licence?

I was around 17 and a half. I passed my practical test first time, and my theory test second time… I think I failed the first one on some stupid questions.

What was your first road car?

A Mini Cooper D. Nothing spectacular. I managed to get a bit of a deal through the BRDC, and it was a pretty nice first car. Then I managed to get a Renault Clio RS, which I got through Renault [McLaren’s F1 engine suppliers]. It was my first automatic.

Haven’t they given you a McLaren yet?

I haven’t got one! I’d definitely like one but it’s not needed at the moment. I’m away so much, so I wouldn’t get to drive it much anyway. I love the P1, and the 720S. One that I definitely would like to have as an everyday car is the 600LT, it’s a bit smaller, looks very cool, and it’s not as out there as the 720 or P1. Hopefully I can earn my way into one…

Tell us about your sim racing…

I play iRacing, under my own name, which I should probably change soon. Did you see the video of Verstappen recently? We’re on the same iRacing team. He was doing some laps, and this guy kept getting in his way, so he ended up taking him out. I guess you get a bit annoyed, because you just want to do some laps. I understand that people want to say they’ve raced against an F1 driver, but it can quite quickly get into the news and give you a bad reputation. 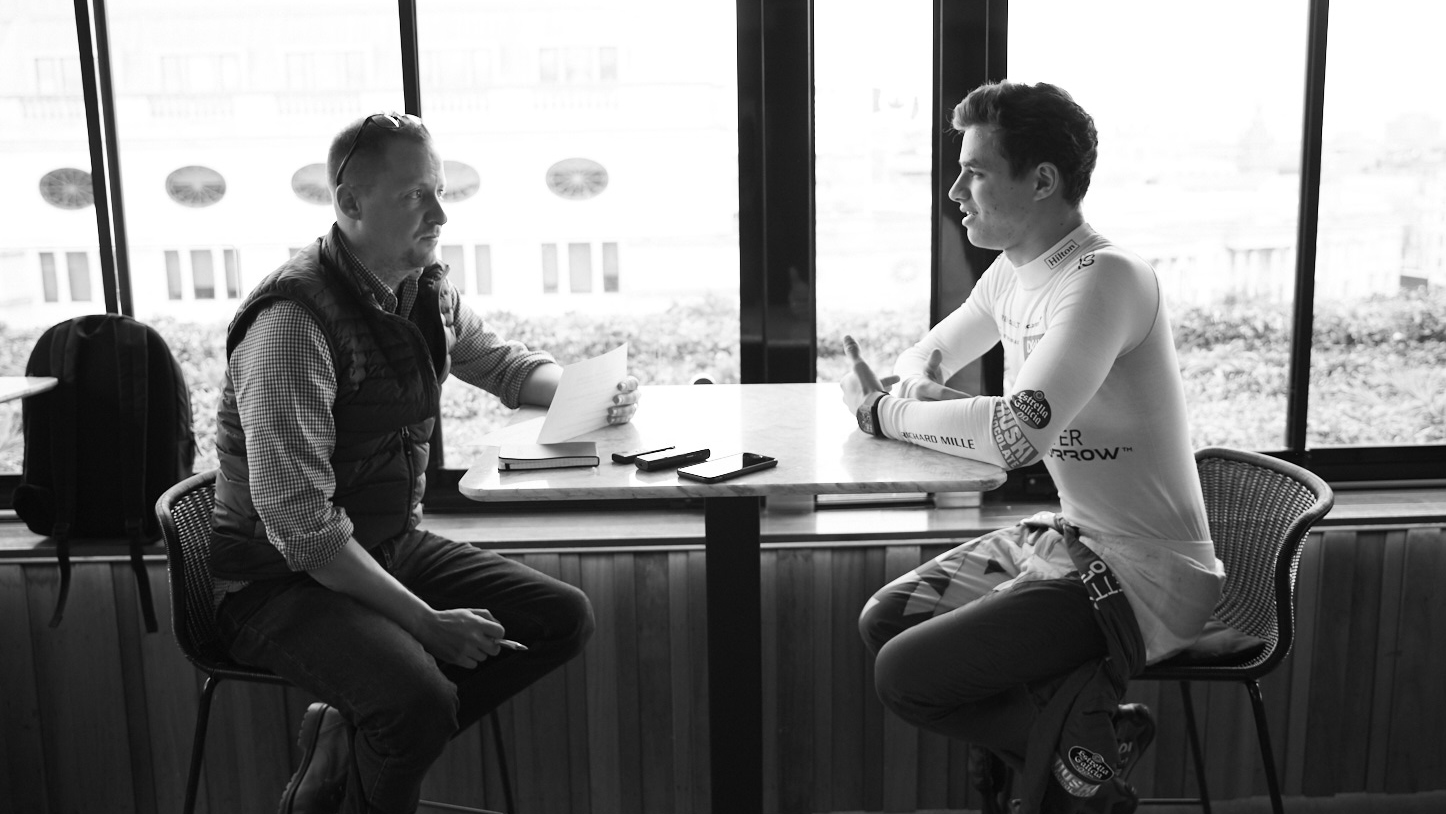 What’s your favourite circuit, in the real world?

It’s between Spa, Austin and Silverstone. But I’m looking forward to driving four tracks I’ve never been to before – Singapore, Shanghai, Montreal and Australia. I’ve never been to any of those countries either. The first time I’ll see the track in Australia is Thursday. I’ll walk it and try to cycle it as well.

Yep, 80 kilos including the seat. With kit I’m around 71kg, without the seat. So they have to add ballast. I have free reign to eat what I like, as long as I don’t go overweight. Being 10 kilos overweight can cost you around two or three tenths a lap. So you don’t want to give away that kind of performance.

Best lay off the pies, then.

I’ve always been on the lighter side. Even in karting, when I was 11, there was a minimum driver weight of 40kg. I was 38kg. So I wore lead insoles and lead ankle ‘protectors’. Obviously you weren’t meant to have all that stuff. So someone complained and I ended up getting stripped searched at one of the races.

You’re racing alongside Carlos Sainz this year. How are you getting on?

Very well. It’s the first time apart from in F2 where I’ve only had one teammate, so I don’t know really what to expect. He’s a very nice guy, he’s very quick, and I’ve got a lot to learn from him – this is his fifth year in F1. He has a lot more experience than I do, so I need to make the most of it, and learn as much as I can.

Do you have any mentors?

Not mentors exactly, but people who have helped me a lot to get where I am. My dad. My trainer. And my manager, who is also my driving coach. He’s been to all my races and will come to all the F1 races. Fernando was at pre-season testing in Barcelona for a couple of days. He was in the debrief and gave his advice. And of course I raced with him at Daytona too…

Are you a quick learner?

Part of my work over the winter was going through my feedback to the engineers. I had to listen back to what I said to them after each run in testing, because they record everything. It’s like Formula 1 homework. I’ve improved a lot! Every little thing you can improve enhances performance.

AMG's sixth car to wear the Black Series badge is a £330k, really quite angry thing...