This is the new Land Rover Defender 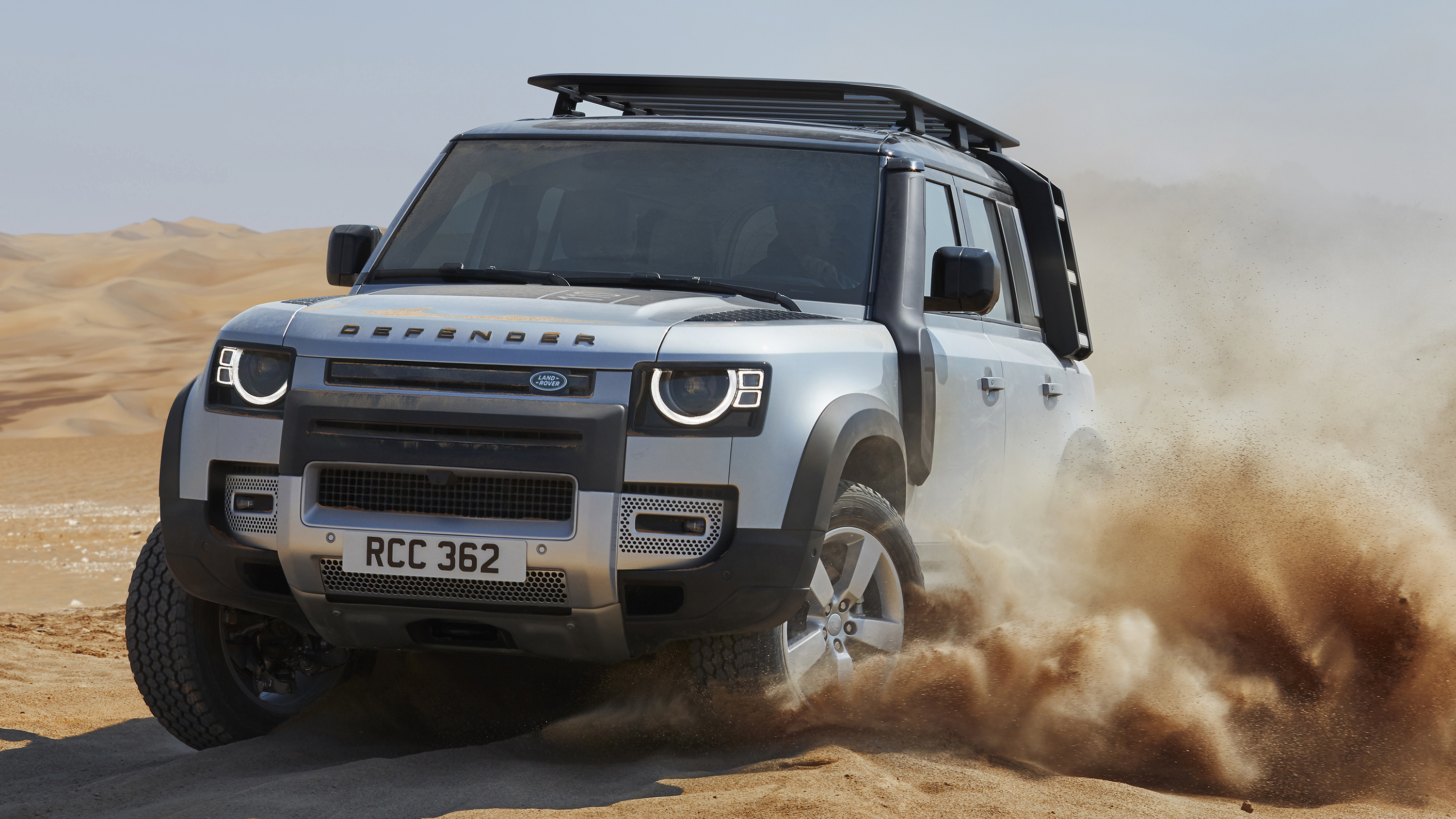 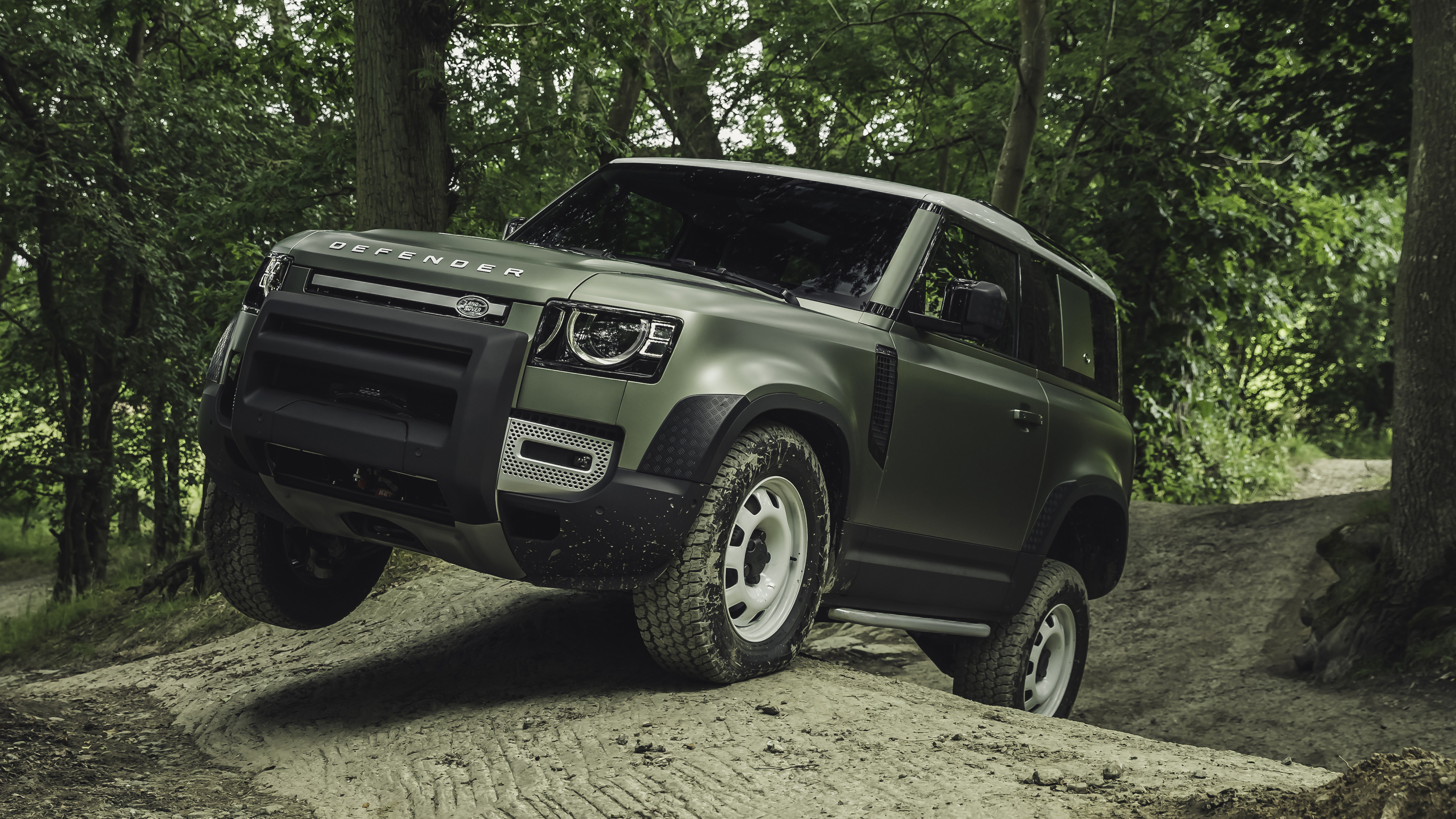 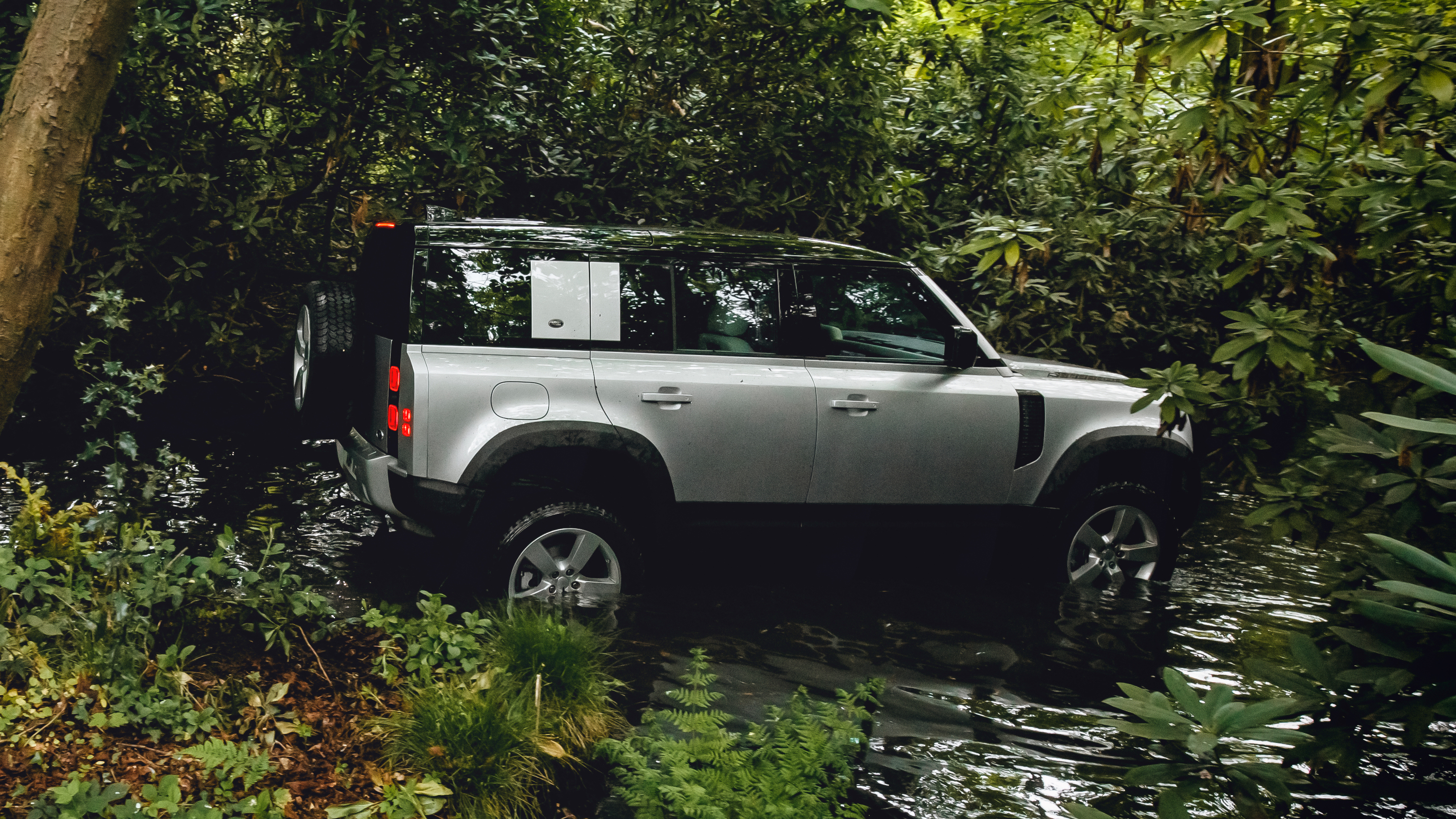 It’s been like the build-up to a royal wedding. Anticipation is at fever pitch and everyone has their own opinion what it should be like. Yet on one thing we can agree: the somewhat entitled assumption that no other nation could do this quite like the British do. Well, the moment has arrived. The new Defender. How is it for you?

Land Rover doesn’t permit us to imagine this pomp and ceremony is in any way hollow. The Defender is, above all, authentic. But authentically what, exactly? Let’s first suppress the clamour for this vehicle to be a reincarnation of the original. That’d be commercial suicide. The old one went out of production not just because it was dangerous and polluting, but because too few people wanted it. It’s a misconception that farmers and coastguards and roadbuilders and humanitarian agencies and UN peacekeepers need a new Defender that’s like the old one. They all drive Mitoyoniszu 4x4 pickups these days. The original Land Rover was great, but by the end it was also terrible.

If you really want that thing to be renewed, buy an old one and have it restored – plenty of cottage-industry firms will do it for you. It’ll be expensive, mind. But then the Defender always was expensive, because although it was simple, it was made in a painfully unproductive fashion by craftsfolk with rivet guns. The new one is better value because it comes out of a modern industrialised factory in Nitra, Slovakia. But it’s still expensive because it’s jam-packed with complex engineering.

This new Land Rover has to walk a difficult line. It must be an object of desire to the prosperous public. But it also needs genuine utility so the farmers-to-peacekeepers market will show a renewed interest. In the recent past, you’d sometimes hear Land Rover management sneering at the idea of building a vehicle for them, because JLR is a premium car company, doncha know. I profoundly disagree: that surely must happen, not just because Land Rover could do with the utility-market sales per se, but also because only that way will the civilian public be buying a car that actually does carry authenticity. In its dotage, in the absence of those farmers et al, the old one had become a too-bogus lifestyle statement, weighed down by both accessories and expectation, yet actually seldom seen beyond the ring road. That’s not a brand position that can survive long-term. So, to its credit, the new one will be available in a Commercial panel-van version, with steel wheels. Phew. Only thus can the blinged-up one on 22s outside an Alderley Edge tanning studio be legitimised. 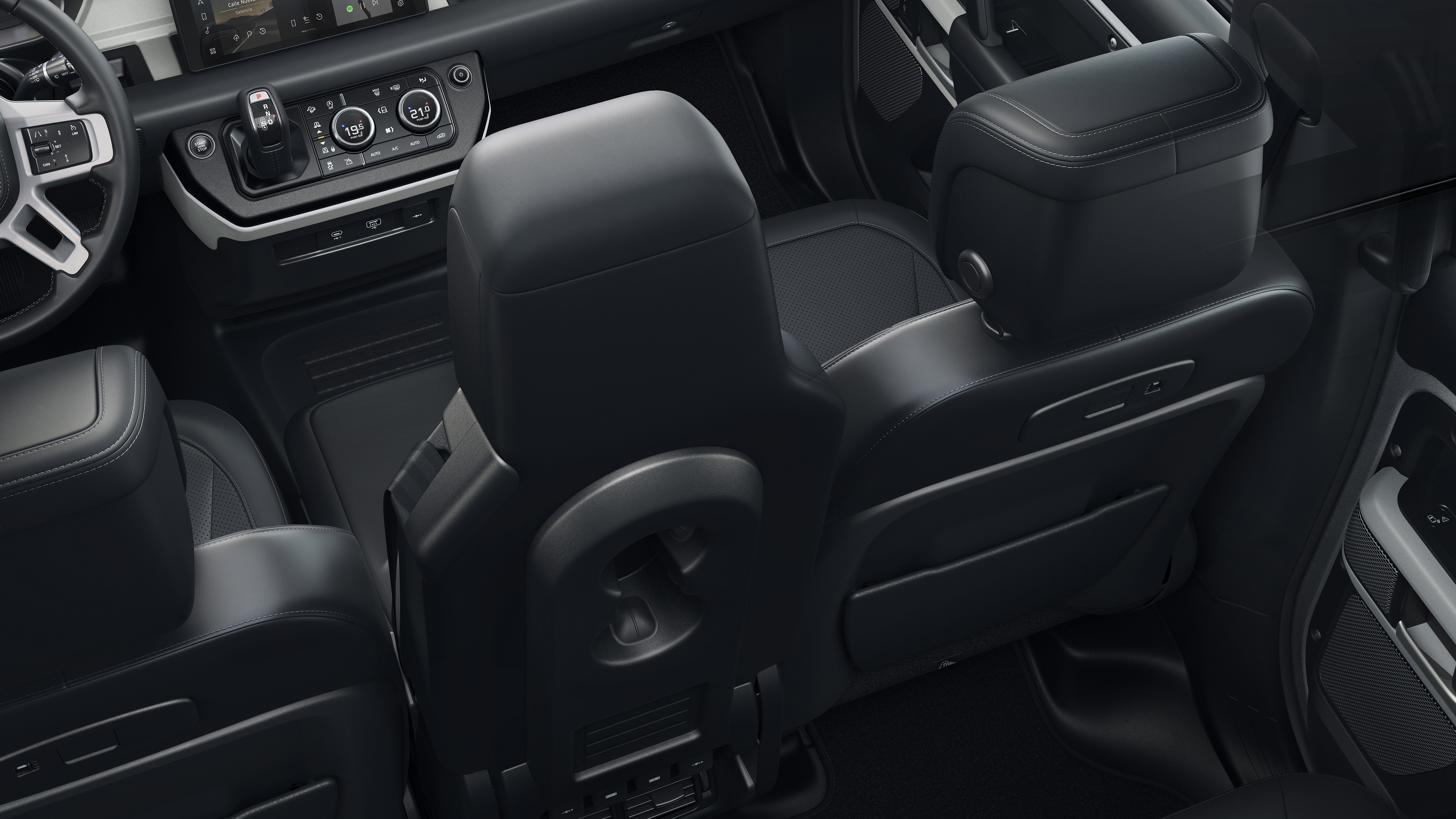 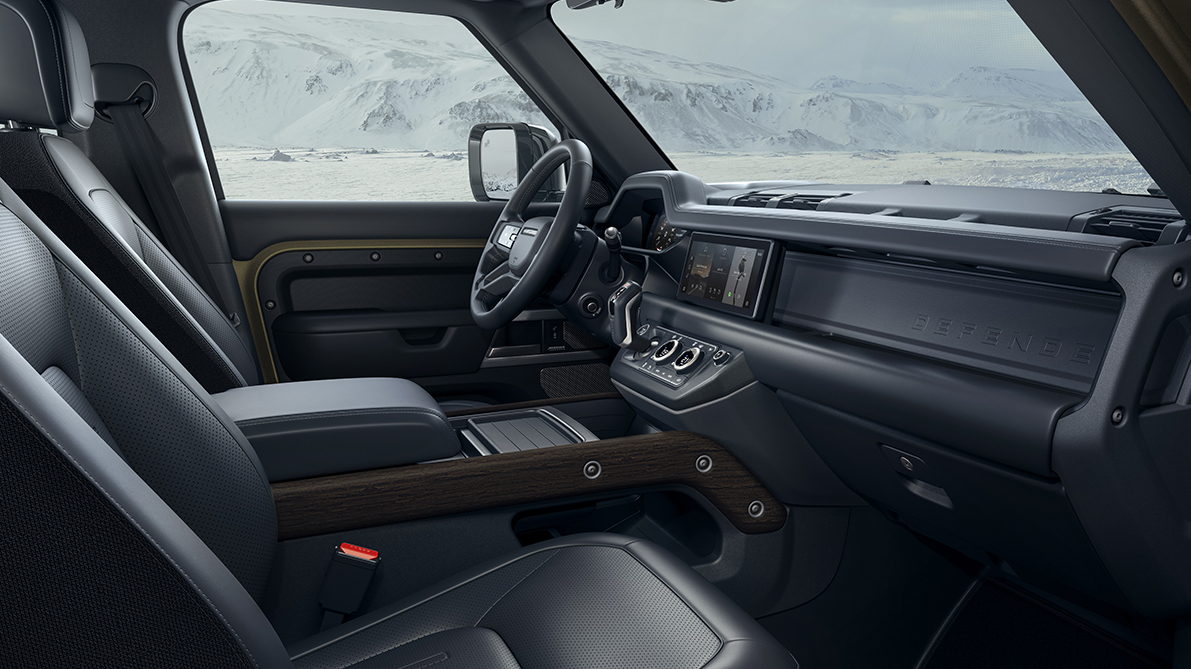 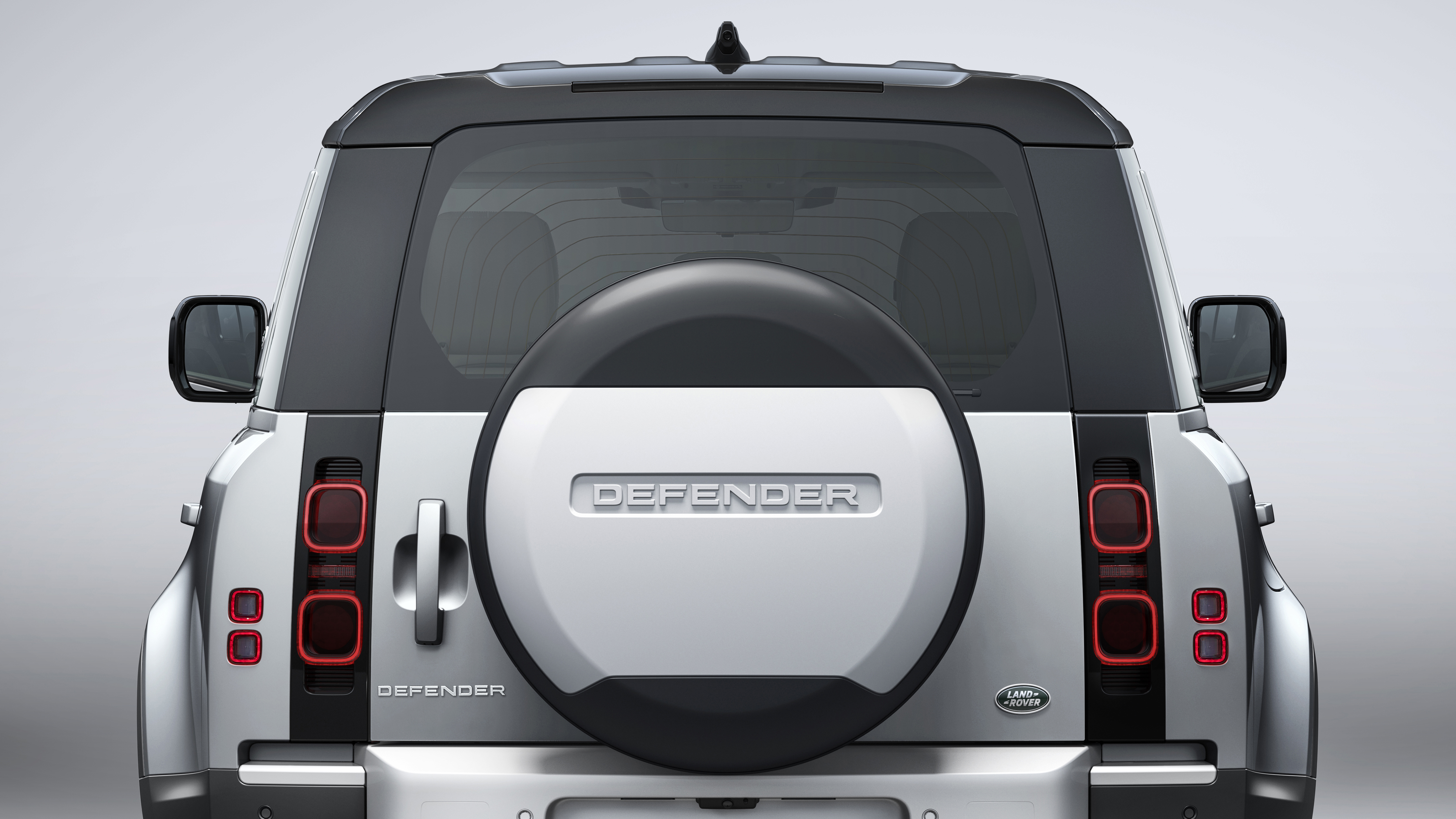 But the Commercial is for next year. For now, we have a Defender 110, a five-door, five-to-seven-seater starting from £45,240. A few months later is the three-door short-wheelbase Defender 90 from about £40k. The Commercial is £35k-plus-VAT, so not much cheaper than the 110 but specced to suit.

No question it’ll be recognised as a Land Rover. What is it about these 4x4s that makes everyone so obsessed with a visual identity that’s so recursive, or, to be kinder, a patrimony? The Wrangler, the Jimny, the G-Wagen and now this, the Land Rover. Actually, it’s not merely that they’re reimaginations of their own former selves. As well, they are at root riffs on the same basic shape as one another. See, if you want best off-road ability, and to accept several rear body styles and lots of accessories, well then, slab sides, short overhangs, big clearance, a horizontal waistline and a boxy cab are simply what you end up with, and so all four of them did.

After that, the Defender designers’ job was to make it look like a Land Rover, and make it look good. If the new G-Class wasn’t so much a redesign as a restoration, the Land Rover designers have taken a far more imaginative approach. They wanted us to know it’s a Land Rover, and one that’s at home in both the actual and urban jungle. They also wanted a new and modern vehicle that articulates a pioneering spirit, in both use-case and in the intrinsic qualities of the object itself. They succeeded. Departing immediately from the old one, none of the panels are actually flat. Flat metal goes ripply and looks cheap; the new Defender has a subtle lushness to its surfaces, with taut wheelarches and a tail that’s curved in plan view. The doorhandles have proper spade handles. The lights are richly detailed, but still look tough. The grille details, alpine windows and floating rear pillars are all signals of Land Rover-ness.

Indoors, it’s rather brilliant too. A big cast beam makes the bones of the dash: it is indeed an authentic piece of magnesium alloy, and structural; you could push the car along using the grab handles at its ends. You can stack stuff on its shelf with no worries, then. It tells you this vehicle can set out on a tough life. The console is modular, too. There are two options: either that or a third front seat, taking the 110 to an eight-seat total. The 90 will, by the same token, be five or six. This makes me very happy: the middle seat was mine as a boy, riding around the farm with my grandfather.

A high-end menu of connectivity and display tech and driver assistance is on the list; more than you’d expect is standard. The cabin has any number of design and trim themes and some very modern matt woods, though doubtless the buyers will soon settle, as they always do, for a very few of the dullest decors.

The design is the synopsis of this vehicle. The full story is the engineering. The basis is a new aluminium monocoque and independent suspension. Land Rover calls this platform D7X. It’s conceptually related to the other aluminium JLR vehicles, but 90-plus per cent of the parts are new. Even the panels underneath are fresh, because they had to move lots of cooling and other systems to get the ground clearance, and make space for electric supplements to the engines. The suspension, all-independent, is super-tough. In testing, they repeatedly drove it at a 200mm kerb at 25mph.

Though 90s and Commercials will have coil springs as their base spec, all 110s have variable-height self-levelling air suspension as standard. It’ll do the usual stuff: kneel to load or hitch a trailer, drop a bit for high-speed running, raise for bumpy stuff, raise more for wading or getting itself off a hump. Nothing new, but this is the sort of vehicle that makes best use of the idea. You can bring your off-roading skills: control the degree of diff locking, engagement of the low-box, the degree of slip. Or you can let intelligent automatic terrain response take care of it all. You’ll know what’s happening because the centre display tells you, and the optional HUD can show chassis angles. Land Rover’s ‘transparent bonnet’ camera adds to your knowledge. 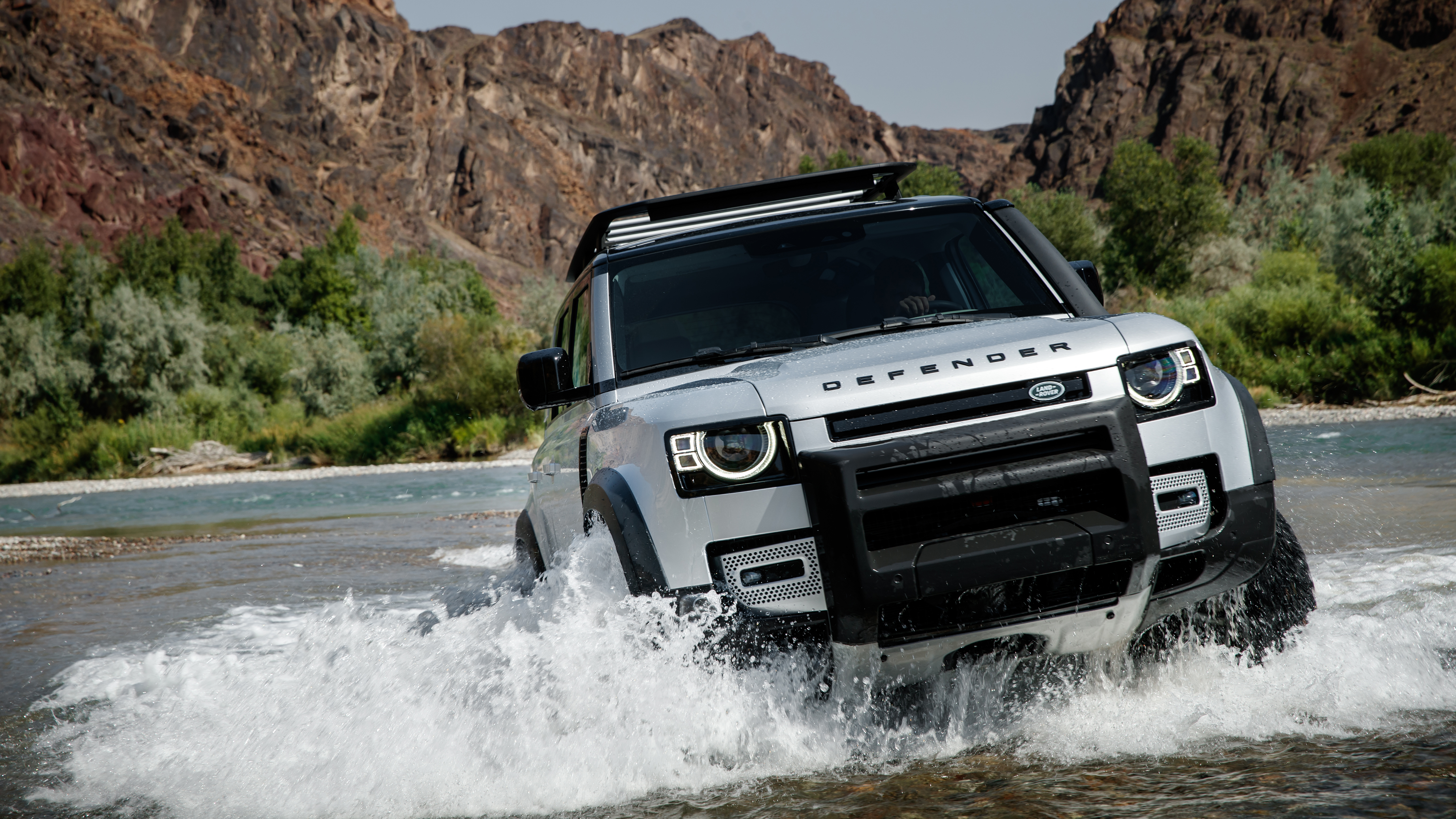 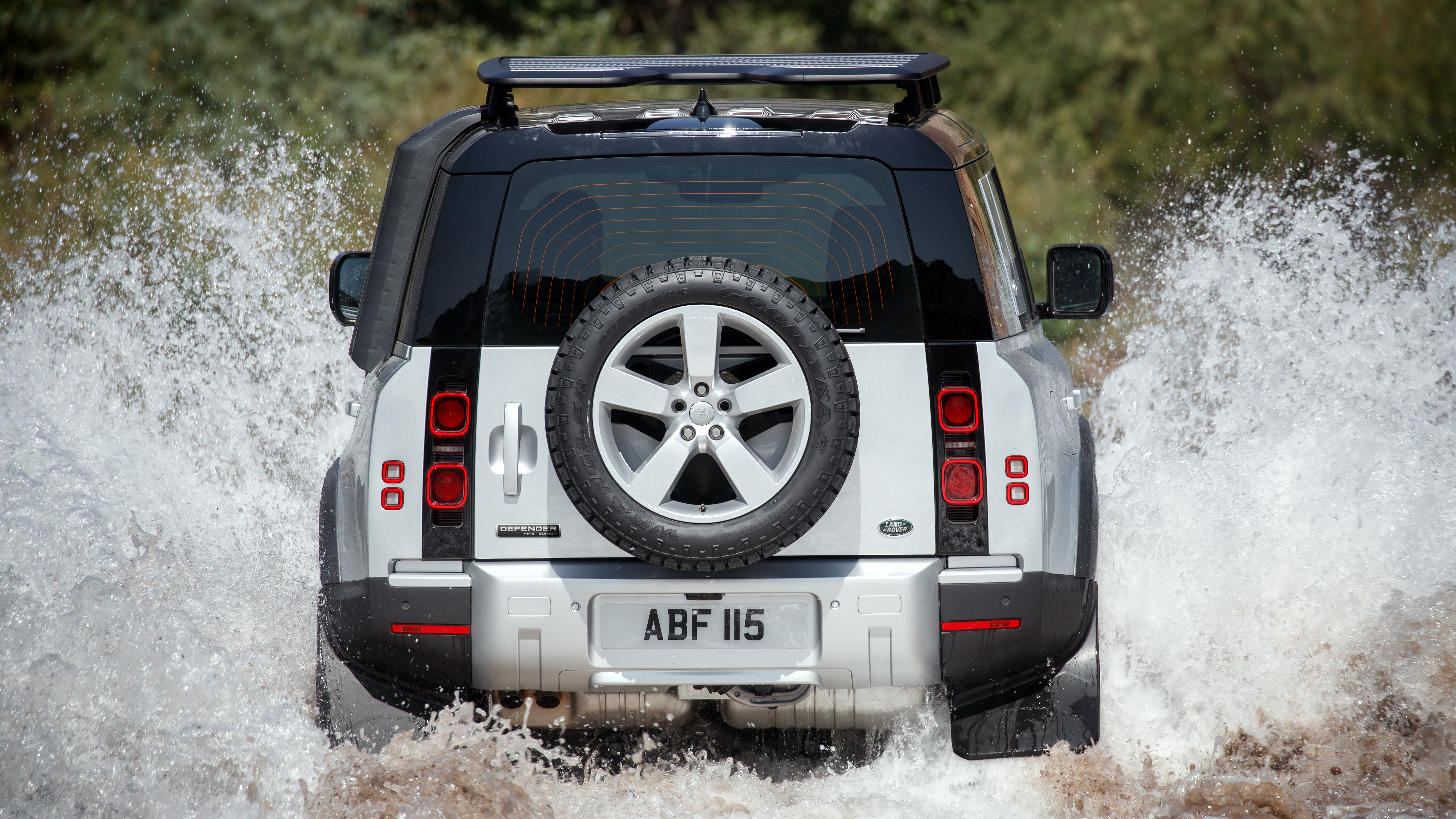 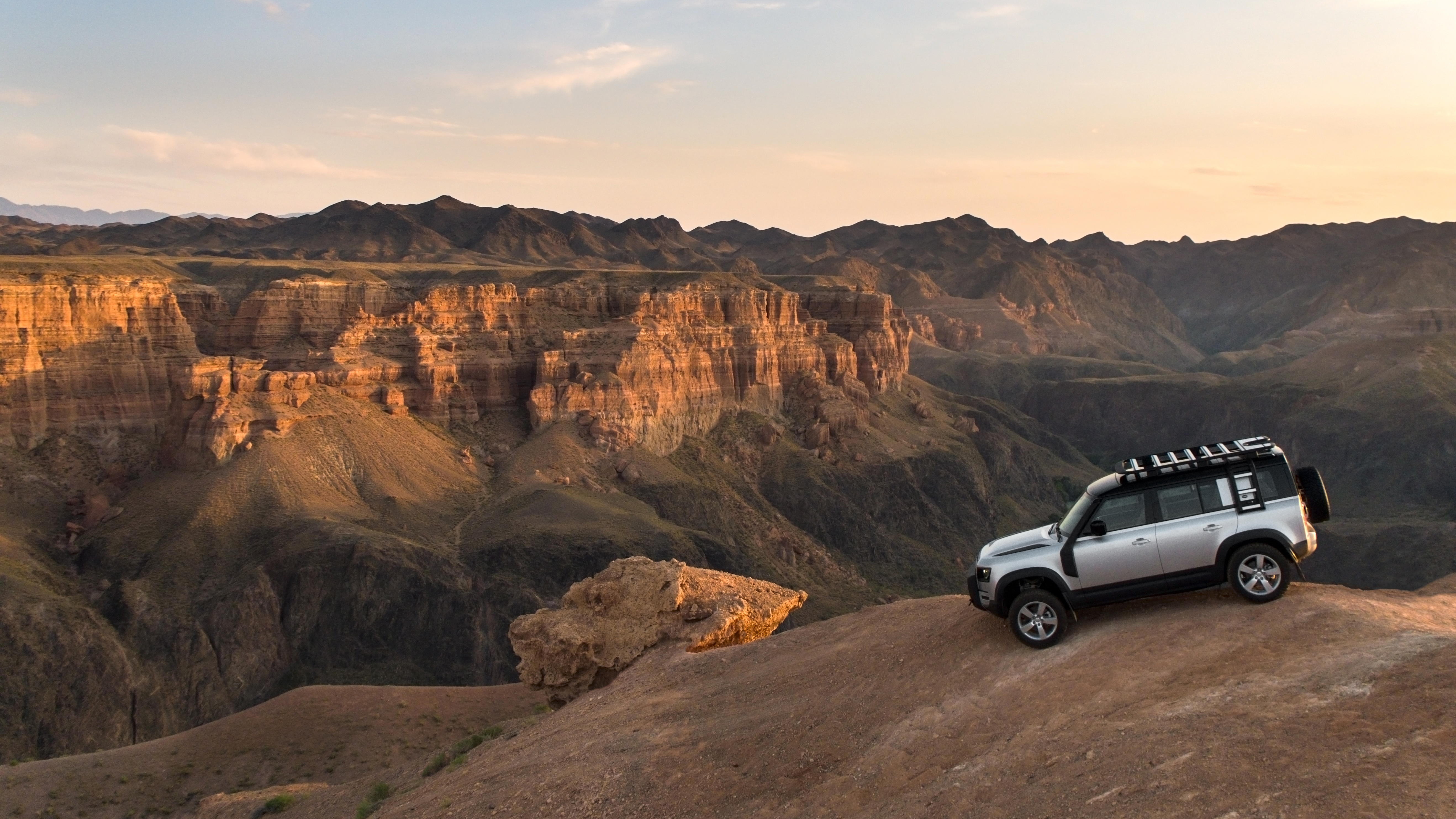 Wading depth is 900mm, which is up to my hip joint. Ground clearance is 291mm. Uncork a bottle of wine, stand it in on the road under the front bumper, drive until it emerges under the tail and you won’t have knocked it over. Payload is 900kg, including up to 168kg on the roof. Good luck lugging that up there, although the accessory side ladder makes it easier. Park for the night and you can climb up to a roof tent, taking static roof load to 300kg. It’ll tow 3,500kg, and provides reversing aids far niftier than you should need if you’re in charge of so much vehicle. Its recovery loops are bolted to the strongest part of the structure, and can shrug off 6.5 tonnes of snatch load. They make good external cupholders too. With its optional integrated front bumper winch it’ll rope-pull 4,500kg. Or yank itself slowly up a wall.

Engines are the best of JLR’s current stuff, including the brand-new mild-hybrid straight-six, not a V6. That’s got a turbo and an electric supercharger for 400bhp and 0–62mph in 6.4secs, which is properly recreational. And a notional 29.4mpg, which is slightly more economical than the 300bhp turbo four. Diesels are 200bhp and 240bhp at launch. All have an eight-speed auto and the mission-critical two-speed transfer box.

You could waste a happy bank holiday weekend configuring this thing. There’s a set of visual outfits evoking exploration, country or urban stealth (aka dark grey attention-seeking). A matt wrap has been in development from the start. It’s genuinely protective and actually self-heals small scratches. Best of all are the mounting plates on the sides, for that ladder, or racks or lockable panniers. There are snorkels and steps and all manner of protection. That tent opens up from an expedition roof rack. Inside are options for power outlets and vent fans for every row of seats. You can have carpet or wash-out rubberised stuff, and partitions and more storage. Click, click, click, £, ££, £££.

This vehicle is definitely not about conventional luxury, not in the sense of plush sensuous indulgence. The luxury here is the experience, an expansiveness and super-function and indomitability in the face of obstacles. Afterward, it won’t demand you clean it out, but it’ll make it easy if you decide to.

The 110, with its boxy look, might very well appeal to owners of the previous-generation Discovery who think that the new one veers too much to conventional softy-luxury. Land Rover people agree if you put it to them: “There will be people who have an old Discovery who’ll gravitate to this. That allows us to take the next Discovery in a different direction,” says LR design director Gerry McGovern.

The time gap between this vehicle and the original looks unfortunate, but in a way it’s also been useful in breaking some of the ties and freeing up the designers. Not that everyone at the company hasn’t wanted to do this vehicle for ages. It’s just that other things were a higher priority. Which makes the point that as a business this might be marginal, despite the fact it’ll now sell all round the world and should make far bigger numbers than the old. Trouble is, building in all that capability costs money, and offering all that variety of configurations makes profit less straightforward to come by.

Everyone’s got their Land Rover story. Right through my boyhood I spent countless hours riding in them, and it just went from there. They mean vastly more to me than any royal occasion. Dearly beloved…