TG rides with stuntman Terry Grant, ahead of his two-wheeled mile record 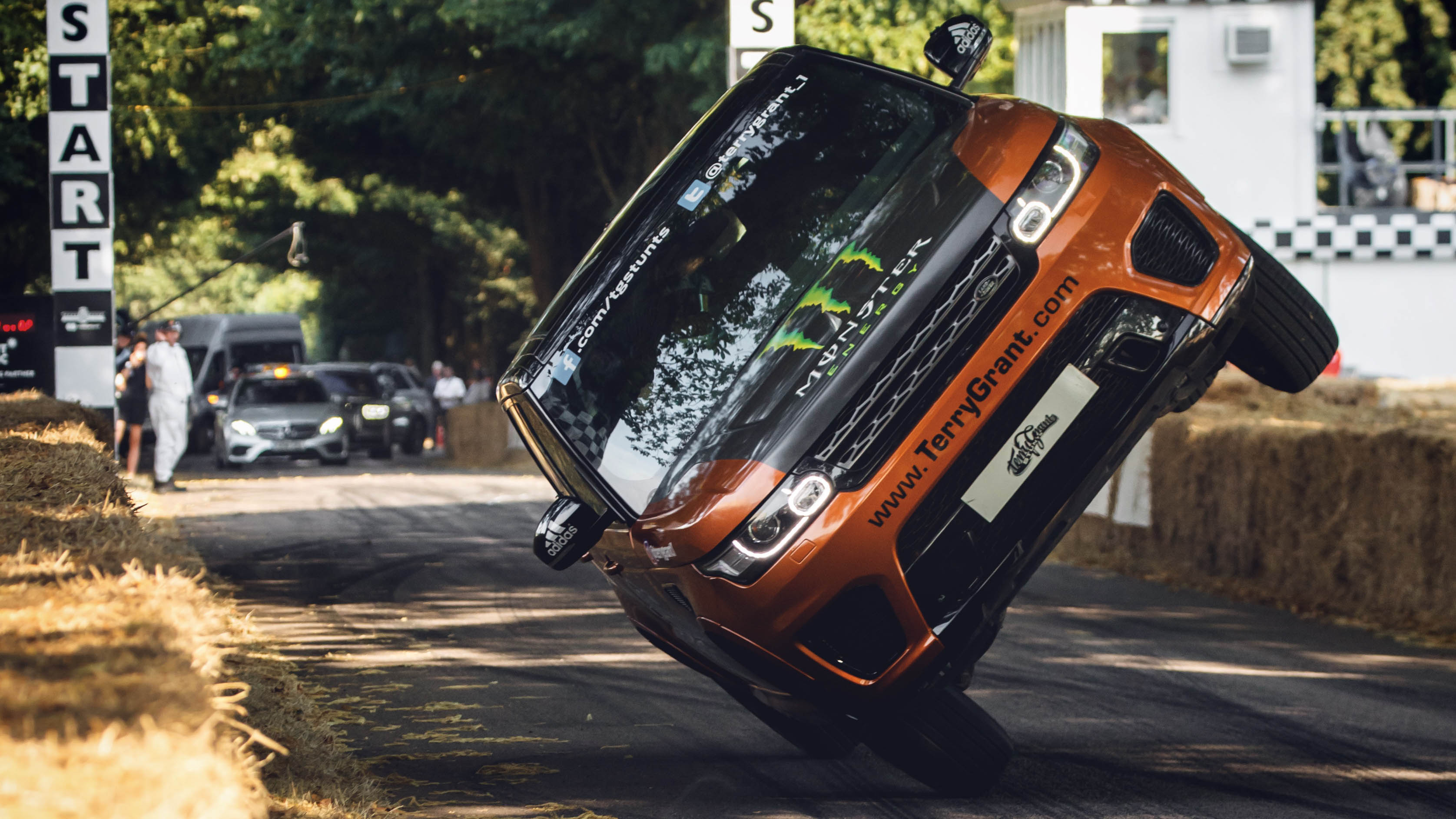 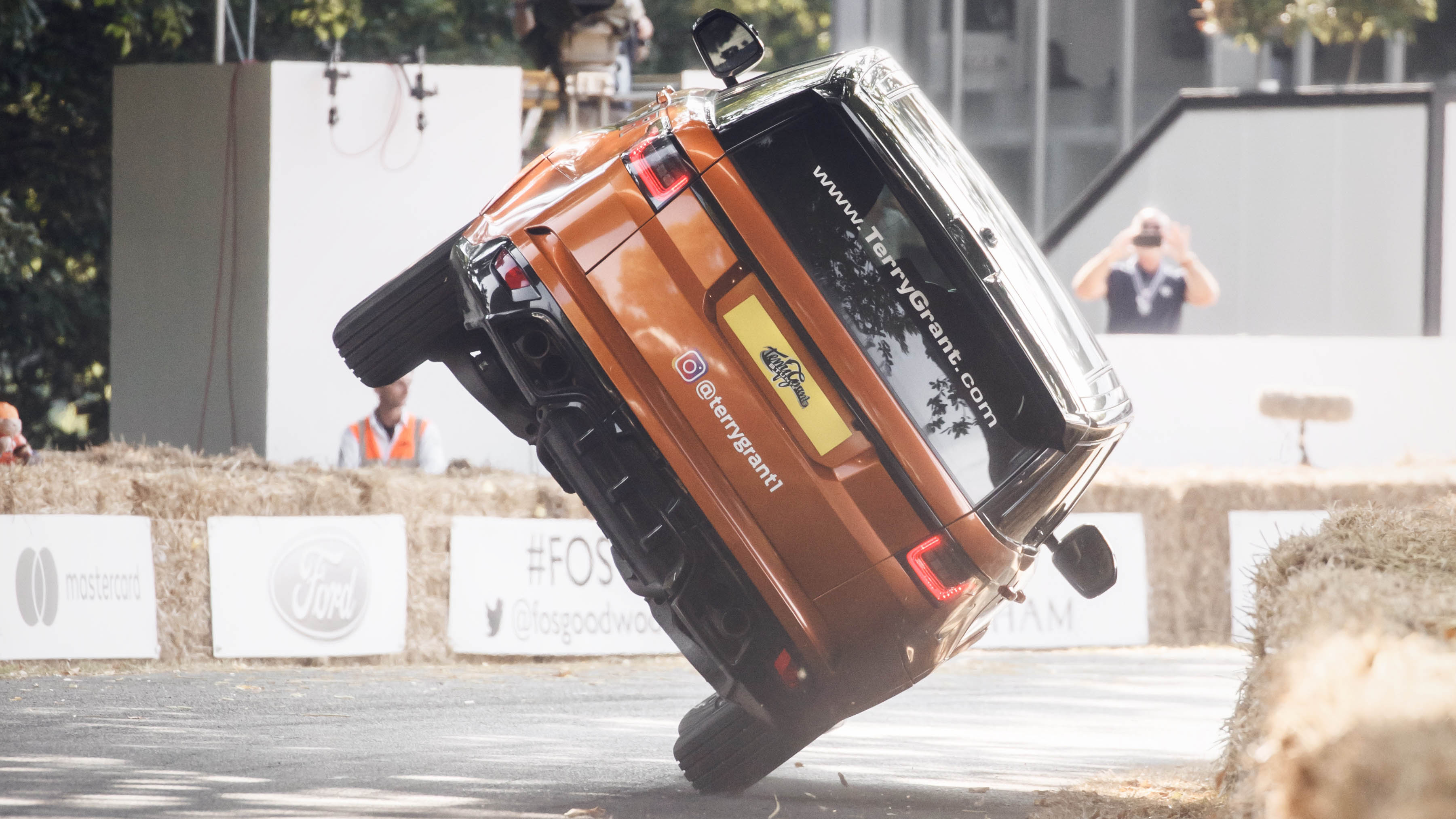 There are two types of people in this world. Those who run towards fire, and those who run away from it. Professional lunatic Terry Grant is the former, which is why I’m looking not at his face, but his back. He’s sprinting across the Goodwood paddock toward a Lexus RC F GT3 that, after getting back from its run up the hill, has decided it would much rather be a fireball than a race car. Maybe an hour later we’re sat in his Range Rover Sport SVR on the start line, waiting for the marshals to give us the thumbs up. Ahead of us is a ramp, beyond that, the Duke of Richmond’s famous driveway and speeds approaching, I’m reliably informed, 70mph. On two wheels.

Terry doesn’t just create drama with his smokey, often incredibly dangerous vehicular stunts. Stunts like the E-Pace barrel-roll, or F-Pace loop-the-loop. He attracts it, too. This year’s drama was the fire. One year he resuscitated a man whose heart stopped beating while he was mooching around the paddock. Another year he helped the emergency services when an old F1 car careened into a bank of spectators, after its driver was leaving a staging area. And that’s just at Goodwood, where nowadays he’s on constant standby. If someone has an off the marshals deploy Terry to go do some donuts, to keep the masses entertained while they sweep up bits of car and tend to casualties.

But this past weekend his focus wasn’t so much on keeping the crowds happy as it was beating his own World Record. See, back in 2011 Terry drove a Nissan Juke up Goodwood’s Hillclimb in 2m 55s. Yes, on two wheels. This year he wants to go faster. Much faster. His tool is a Range Rover Sport SVR, one of 32 cars in his stable of stunt-ready machines. You’d think a car – any car – would need substantial suspension and drivetrain modifications to be able to go for such a long time on two wheels. Maybe a bit of lightweighting. But you’d be wrong.

This SVR is an old development car, most of its 14,000 miles done in anger around the Nurburgring. In fact, this is the very car in which Land Rover set the then record for the fastest SUV to lap the 13-odd mile track, with a time of 8m 14s. Nowadays it’s orange – because obviously. Rear-wheel drive, a hydraulic handbrake and welded diff help Terry pull the smokey slides and initiate the donuts that made him famous. Otherwise it’s fairly standard – there’s no roll-cage, or any added safety equipment, and it still has a full interior. I consider setting my heated seat, despite 28 degree temperatures. Just because I can.

Tyres are an issue. They’re pumped up to 90psi and completely shot after just a couple of miles. “We’ve gone down to a 20in wheel so he’s got more sidewall,” explains JLR tech’ Dan Blowes. “If you go to the 21s the alloys dig in to the track surface. On 20s it’s dead stable. As stable as a 2.5-tonne car on two wheels can be, anyway.” But stability is relative. Just ask Theresa May.

I’m not convinced. But Terry does his best to put my mind at ease. We’re here on the Friday of Goodwood weekend – the first proper day of the Festival – so he’s not going to go all out straight-away. That would be foolish. “You can’t really come here and practice because it’s once a year,” Terry tells me. “For sure I’ve driven this car on two wheels, and I know how good it is, but we’ll go for it and see.

I feel a lurch as the Rangie leans right the way over, its door-handles as good as scraping the tarmac. If the window were open, I could reach out and pluck a blade of grass from Goodwood’s immaculately manicured lawns

His words reverberate around my head as we clamber aboard the big orange Rangie. I’m sat directly behind Terry, quite literally on the edge of my seat, for optimum weight distribution. Goodwood is running behind time by over an hour, so the pressure’s on to get the first of his runs over as quickly as possible. As we’re called up to the start line, Terry leaps from the car to repaint his guidelines with a can of white spraypaint, and finesse the position of his ramp. This is not what you want before attempting the vehicular equivalent of balancing a fountain pen on its nib. On a cross-channel ferry. In rough seas.

Then he’s back in the car and we’re rolling. Those of you who’ve ever been involved in a car accident will know the feeling. As the SVR’s left-hand side rides up the ramp, it’s like that split-second before the impact – that suspended reality when you know you’re having a crash, and that pain is more or less imminent. Only the pain never arrives. The crunch never happens. We sail off the end of the ramp, and instead of the folding of metal and the splintering of glass, this near-three-tonne behemoth hangs in midair, perfectly balanced on its sidewalls. Everything goes quiet for a minute, as I struggle to stay upright. Then the noise comes rushing back. I’m not sat on the seat anymore, but on the door. Tarmac, straw and grass rush past one window, and sky the other. Terry saws at the wheel, wrestling with physics, and the SVR’s natural and entirely reasonable desire to either right itself, or topple over onto its roof.

He loses. I feel a lurch as the Rangie leans right the way over, its door-handles as good as scraping the tarmac. If the window were open, I could reach out and pluck a blade of grass from Goodwood’s immaculately manicured lawns, or a marble of rubber from one of the BTCC cars we tailed up the hill. Terry’s left with no choice but to abort the run, lest we end up hanging by our seatbelts, trapped in a stationary car that would take no further part in the weekend’s festivities. There’s no saving this, not even for someone of such talent and experience. He yanks the wheel to the right, slamming the left-hand wheels down with an almighty thud. I’m surprised the airbags don’t go off. Maybe they’ve been deactivated.

We’ve made it as far as the first corner, and reached 40mph. Terry doesn’t bother running the hill, no point. He peels off into the paddock, adrenaline coursing through both our veins. He’s annoyed with himself, that much is clear. He’s apologising profusely – says he only just got it back on its wheels. I know he’s serious – because he’s clearly a bit shaken, and so am I. With everything that had happened – the fire (for which he was later called to the medical centre), the trouble with his marks at the start, the time pressure – he didn’t want to risk it. He never found the equilibrium – the balance. And that’s a shame, but if anything highlights just how much concentration and energy this kind of thing requires. Even from someone who makes a living doing it, who’s done it literally thousands of times.

I wish Terry luck for the rest of the weekend, and we part ways with a man-hug. Feels appropriate. I’ve done stuff in cars. Cool stuff. But this is without doubt the biggest adrenaline rush I’ve ever gotten from sitting in a passenger’s seat. It’s like nothing I’ve ever experienced.

If you Internet, you’ll know by now Terry broke his record on the fourth and final attempt by more than 30 seconds. He bounced back, and did the business. You can watch it up top, and one other attempt that didn’t end quite as well. The moral of the story? Be more Terry. Run towards the fire.*