AMG liked Volkswagen’s old 4x4 superhatch so much, it built one. Can it topple the new Golf R? 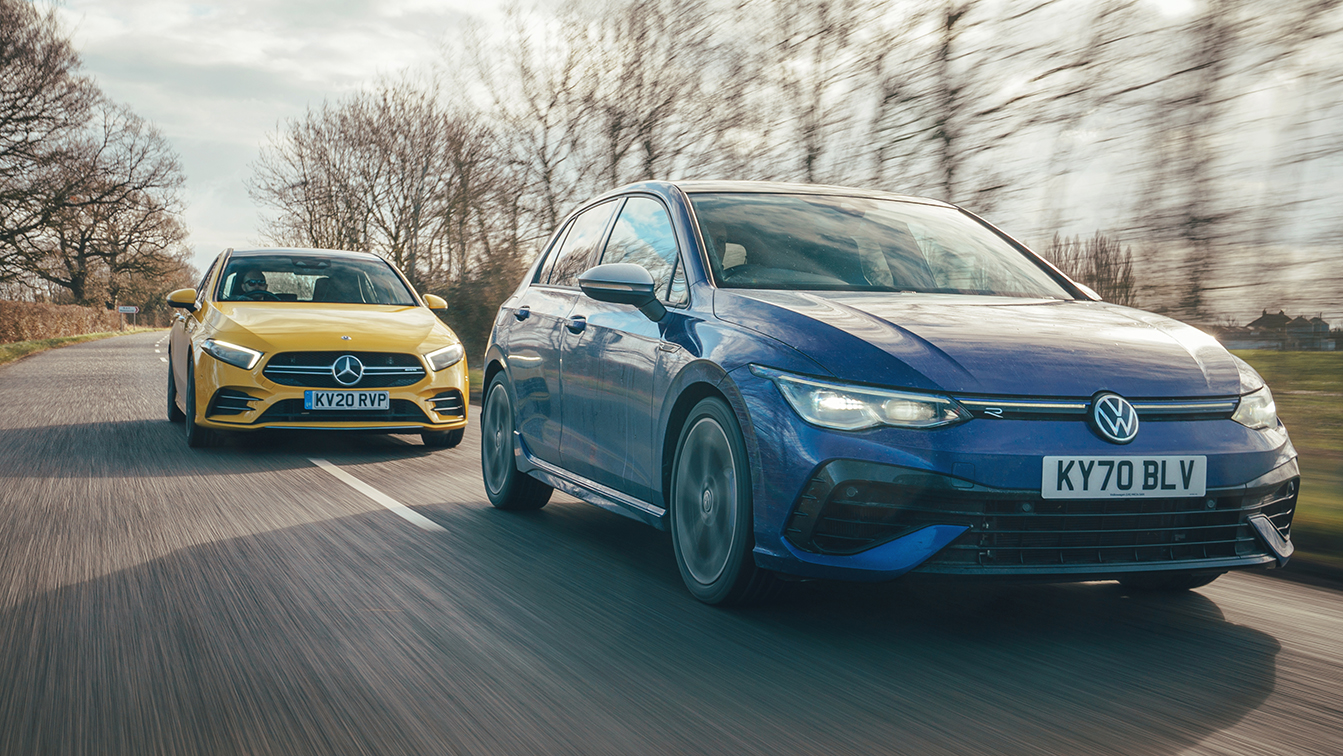 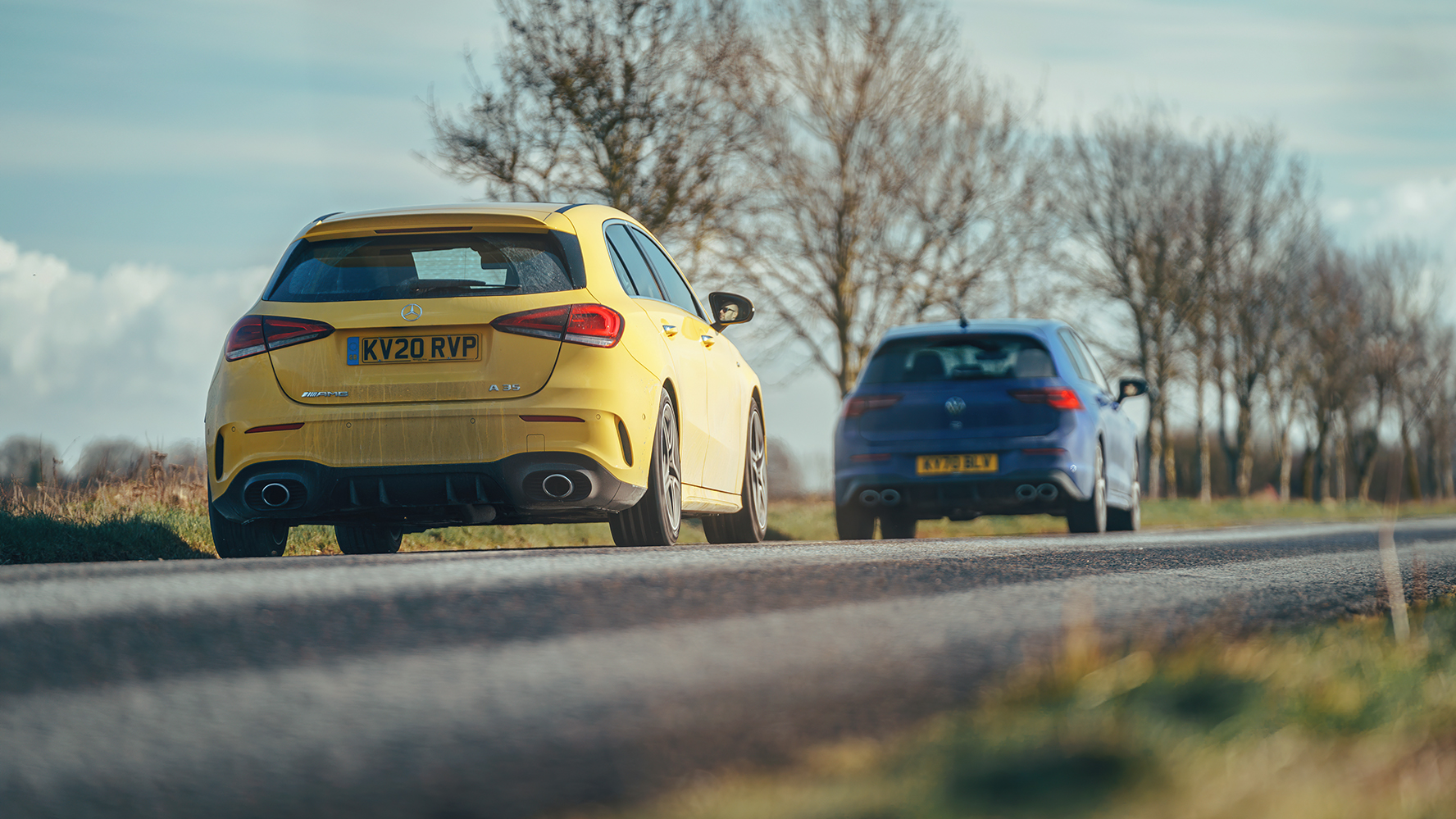 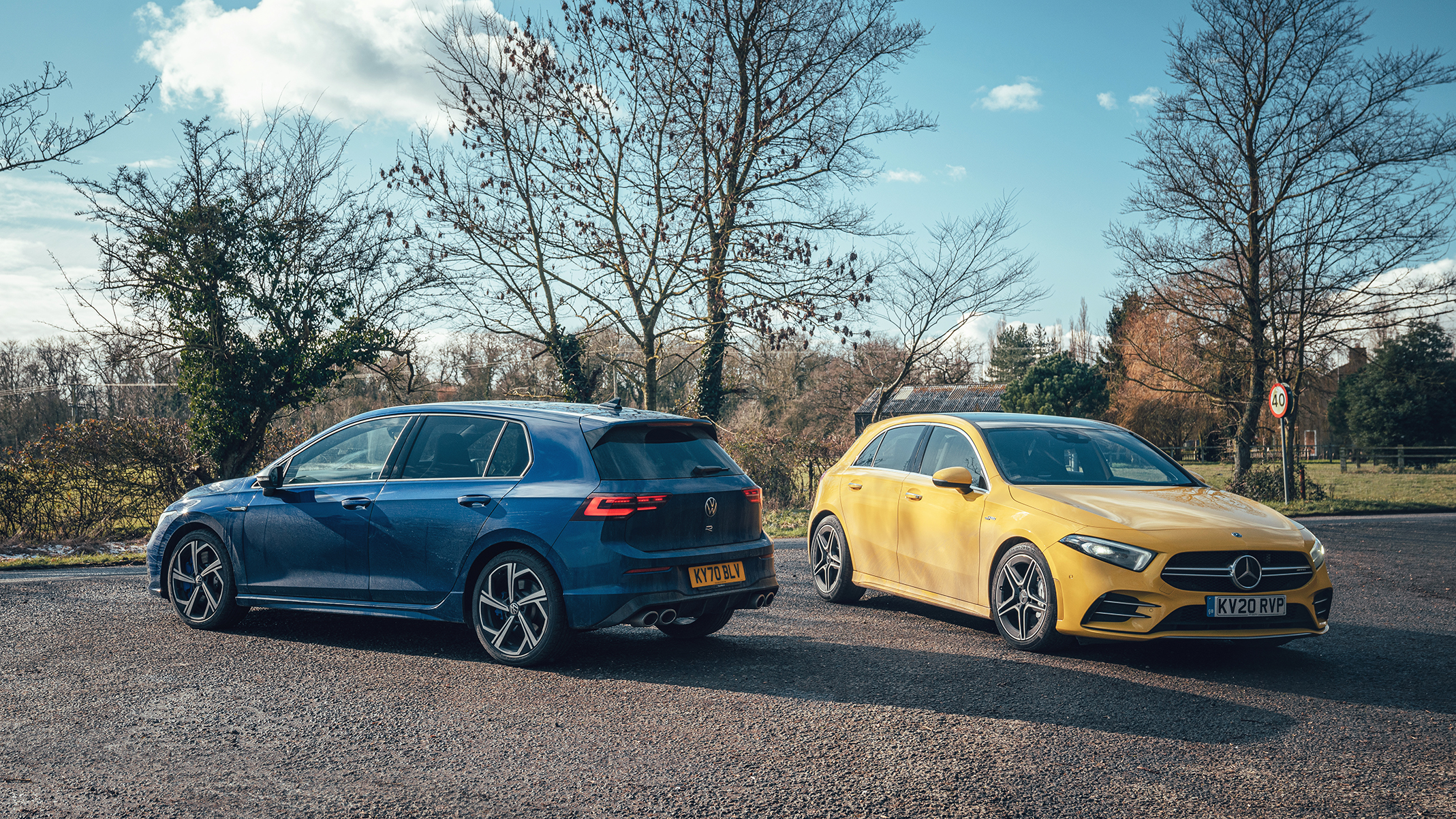 What’s the internet actually for? I can think of three things off the top of my head.

Sharing the sum total of human knowledge, watching portrait clips of Mustangs leaving car meets in a tank-slapper, and promoting conspiracy theories. Here’s a new one for you: the Mercedes-AMG A35 simply would not exist if Volkswagen’s old Golf R hadn’t been a blinder.

Mercedes, y’see, had shown its hand. AMG’s made its play in 2013, insisting the best posh hot hatch was the most powerful hot hatch… ever. The utterly crackers, all-wheel drive A45.

Five minutes later VW’s Mk7 Golf R came along. Ten grand cheaper and 70 horsepower worse off. And most of us thought “Yep, that’ll do nicely. Love your work AMG, but the Golf’s enough for me".

So, during the Mk7 Golf R’s life – while the three door bodystyle and manual gearbox were quietly shelved and the price was steadily creeping from sub-£30k to well over £37,000 – AMG was having a rethink. Well, I say ‘think’, but ‘shameless copy’ might be more accurate.

For the latest shape of A-Class, we got the new A45 – which is about as friendly and approachable as a hungover Priti Patel, but more powerful – and a new entry-level AMG: the A35. Looks so much cooler without the tarty optional wing, right?

The spec combines a 2.0-litre turbocharged 300bhp engine with a seven-speed twin-clutch gearbox, four-wheel drive, a subtle bodykit and 0-62mph in 4.7 seconds before topping out at 155mph. Remind you of anything? Heck, even their kerbweights are nigh-on identical.

VW is as bad. This new Golf R Mk8 has an annoying multiplex interior, touch-sensitive buttons smeared about the steering wheel and an optional Drift Mode… just like the new A45S.

Honestly, sometimes the Germans are so unhealthily obsessed with keeping up with each other it’s a wonder they remember to write the correct company name on the tailgate. 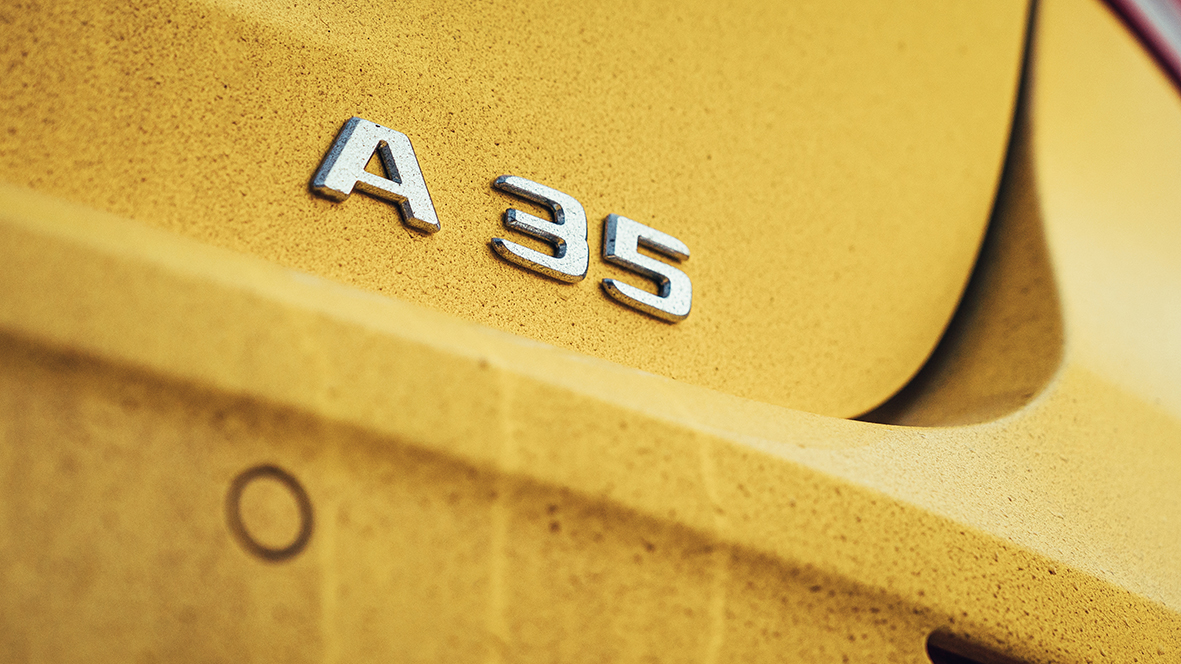 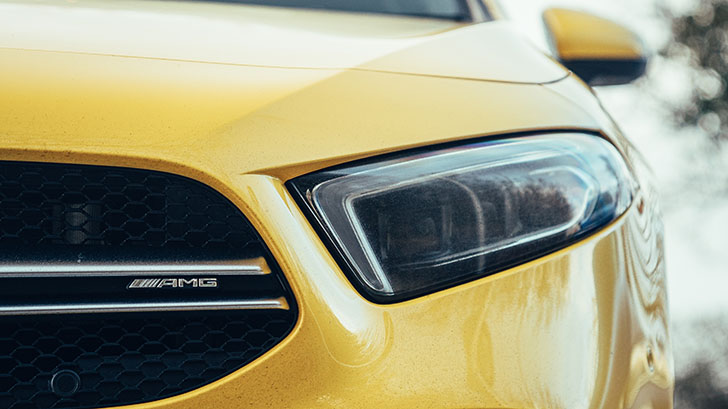 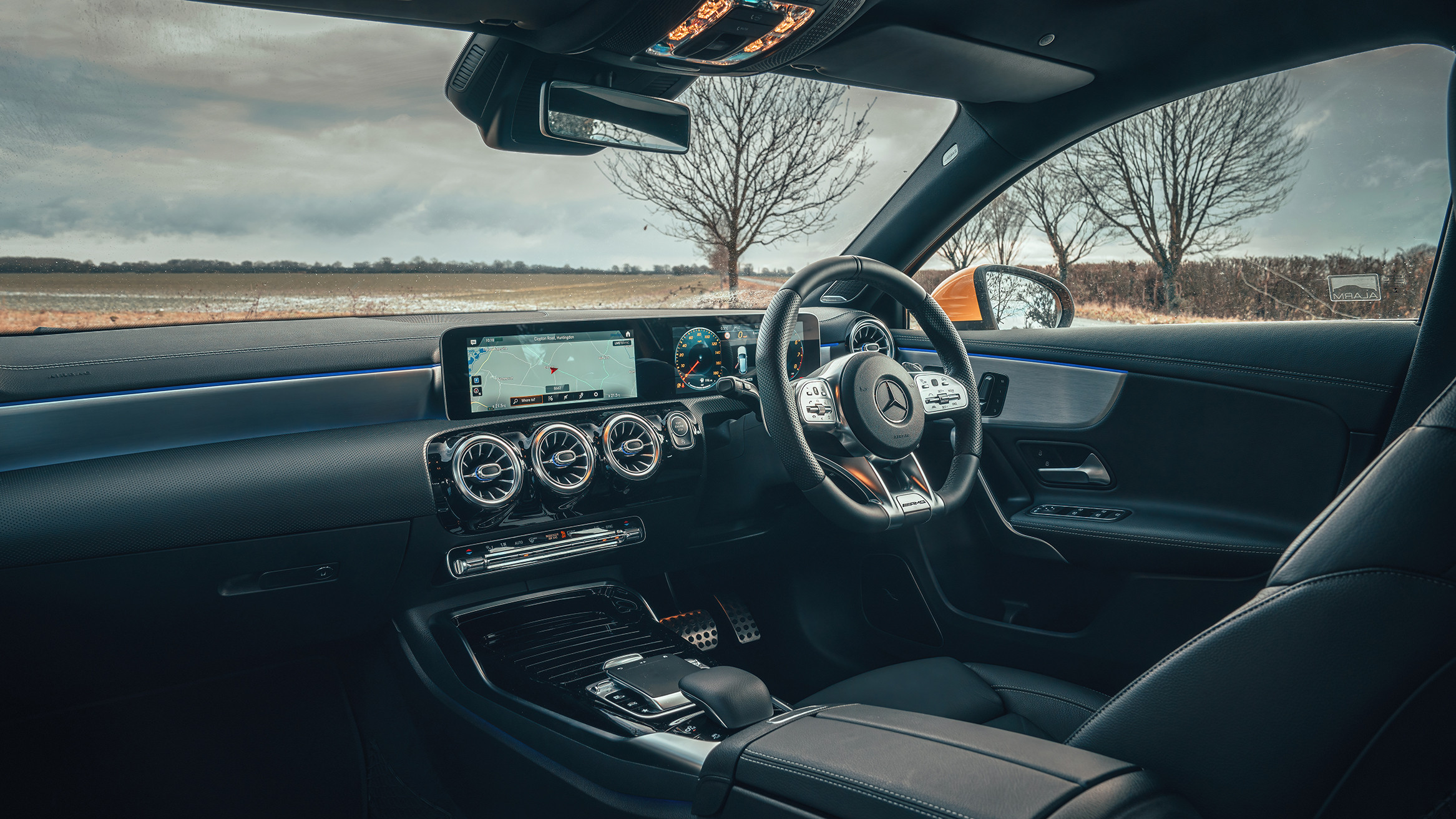 Anyway, what we have here are Mercedes and Volkswagen's idea of the ultimate any-weather, any-occasion Swiss Army knife. A special forces nanny that can take the kids to school, shrug off commutes, bumble about in traffic, handle tip runs and supermarket sweeps, cost less to run than a bolshy SUV and be yours for about the same monthly outlay as fibreoptic broadband. And, every so often, blow your mind into three separate postcodes.

These, in short, are the ultimate cars to live with. The perfect blend of badge and ability. Funny then, that they’re so very different.

I set off in the A35, partly because it’s been a year since I last drove one (when it unconvincingly beat BMW’s own carbon copy of the Golf R) and mostly because it has heated seats. It’s properly freezing today, and VW reckons it’s okay for a £40k top-of-the-shop flagship not to have bum warmers as standard.

While my backside is thawing out, I reacquaint myself with all the A35’s flaws.

I don’t like the chintsyness of its interior, how most surfaces glare or reflect then creak when prodded, and how Mercedes set up the infotainment to be operated by touchscreen, trackpad and steering wheel buttons, none of which work quite as well as the clickwheel that came before. The seats look like a dead whale’s tongue and offer as much support as Old Trafford does lately.

It’s bloody noisy too. Tyre roar booms about the cabin in a most unBenzy fashion. And now my bottom isn’t numb, the ride seems somewhat busy.

The AMG gargles, rasps and trumpets like it’s being fuelled with 100-octane baked beans.

Dispel any notion that just because the A35 is the baby AMG cub, it’s any less aggressive than the loony A45. This thing’s a barely-contained temper on wheels.

And that has its good points. This engine is a crisp, fizzy firecracker of a thing. That blip of turbo lag only adds to its character. I’d driven to this German civil war in the Golf, barely aware it was the 316bhp quad-piped R version. It’s so compliant, so careful not to intrude on your day.

Swapped into the AMG, cradling its expensive metal paddles in my fingertips, I’m astonished how much more exhilarating the A35’s drivetrain is. It gains and sheds revs with less inertia, the engine note is a cackle to the VW’s saintly hum, and while the Golf’s embarrassed about exhaust flatulence, the AMG gargles, rasps and trumpets like it’s being fuelled with 100-octane baked beans.

So, while the A35 has less power on paper, and its torqueband is weaker and peakier, it feels faster. More responsive. Pinpoint gearshifts versus the Golf’s rounded-off slurs. On the first A-road chase, the Volkswagen can’t hope to match the Merc’s sheer onslaught of excitement.

On first impression, the Golf is a Zoom pub quiz. Fun, but tame. The A35 is the first bar crawl after lockdown. Mayhem. And you’re going to have a sore head tomorrow.

Now, when the A35 squared up to the M135i, I gave the AMG the nod because it was that much more of an event. And at first, this contest looked to be going the same way. But then something weird happened.

I’d been tailing Stevie from the A35, hunting down the Golf and shouting it into the weeds, when he hooked a left onto a slightly narrower lane. The classic sort of back road that links England’s sweetest chocolate-boxy villages. Within seconds, the Golf was gapping me. I fell back helpless, choking on the VW’s emissions.

At speed the A35’s firm dampers come good, but it only has passive shocks (to preserve the A45’s bragging rights) and this Golf R has the optional DCC suspension. That means while the A35 leaves you impressed at how it deals with a bump or a crown or a pothole, in the Golf R you say “sorry, what bump?”

The AMG’s getting buffeted and bump-steered and boxed in. I have to ease off to keep all four tyres on the deck while the Golf just cruises into the distance. Stevie completes the humiliation by pulling over to let me catch up. He admits he hasn’t even been trying. 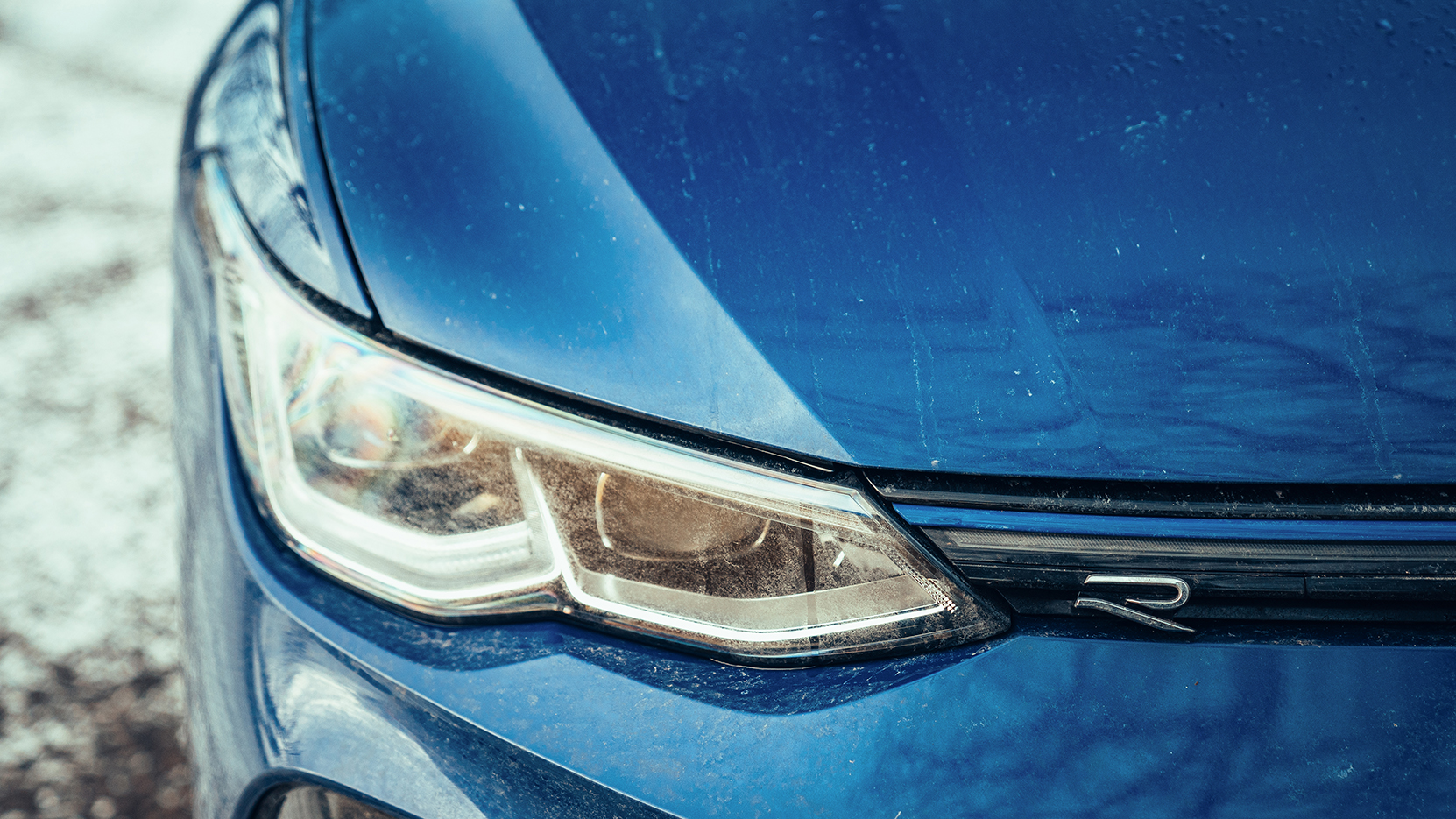 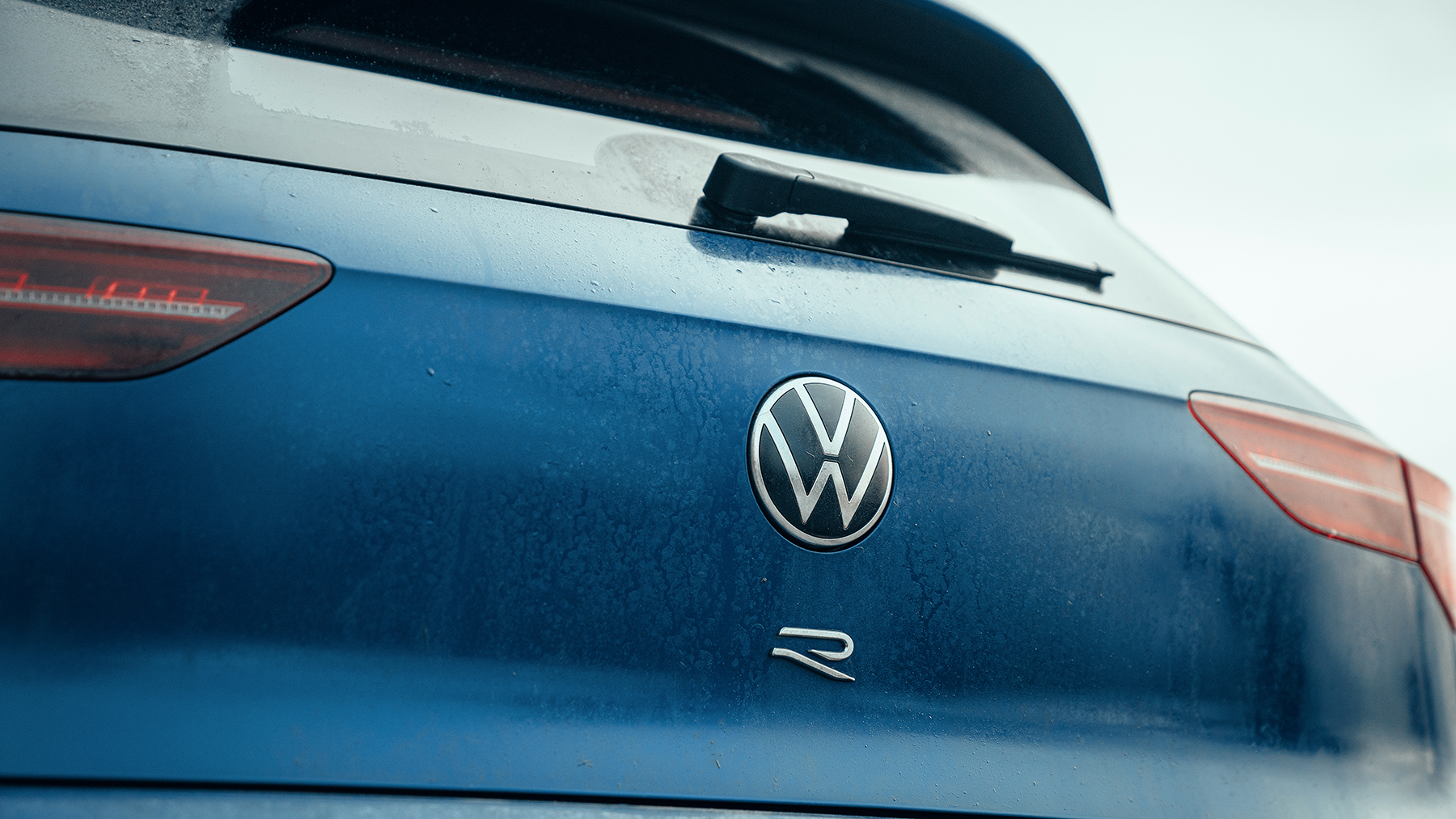 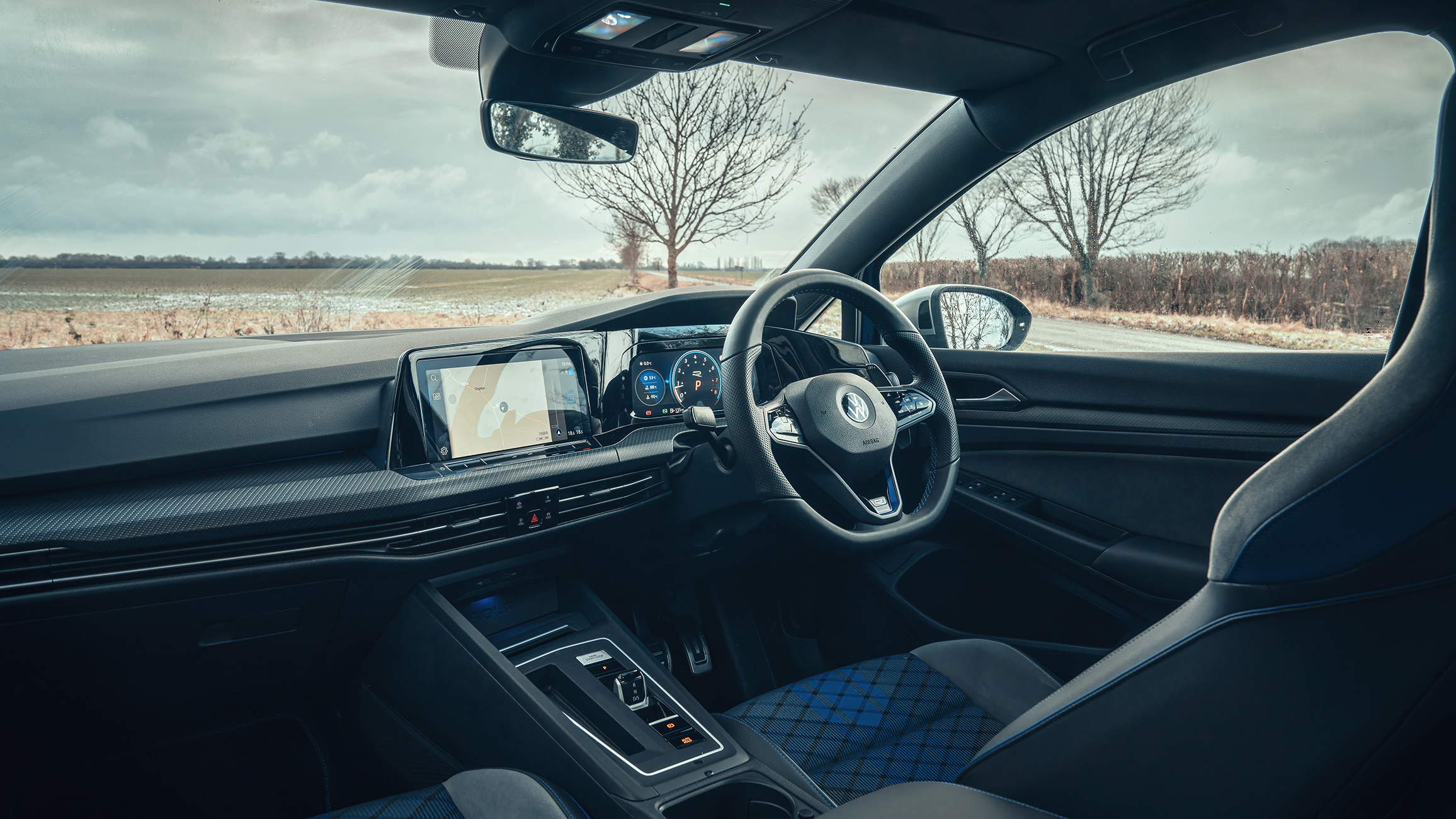 So, the Golf maintains its composure and accuracy while the AMG gets scrappy. It’s the boring, safe-as-houses one then? Er, no. Like the last Golf R, you have to go looking for the chassis sparkle in this Mk8, but it’s there alright.

The Mk8 Golf R’s awkward secret is the much-hyped Performance Pack (£2k) which adds Drift and Nürburgring modes - basically a couple of lines of computer code - plus 19-inch rims and a taller spoiler. All Rs get the same basic hardware, chiefly the torque-vectoring rear differential.

While this example can’t powerslide you into a Neighbourhood Watch furore, it still has the raw talent of a car that’s not simply a traction monster.

Through each corner, you can sense the electronic front diff fighting to claw purchase from the road, and the rear diff feeding torque left and right to keep you on a line. They’re a sensational team.

The car’s attitude is trimmable with more throttle, or lifting off, or even a dab of the firmer-feeling brakes. While the A35 can play the yobbo with an old-school lift-off mid corner, it’s ultimately more of a point-and-squirt device. The Golf’s always performing serious mathematics to stay alive beneath you.

This’ll sound mad, but when the roads got slippery it reminded me of the Ferrari F8 Tributo’s guardian angel-o-matic toiling away beneath the skin like a Typhoon jet fighter’s systems. It’s using tech for speed and for fun.

Now, the Golf R can also be a right old pain in the neck. The touch-sensitive heater gutter doesn’t light-up at night, the touchscreen’s buggy and repeatedly booted my iPhone off the Apple CarPlay connection, and waiting 20 seconds on start-up for the climate menu to load while your breath hangs in mid-air like a sad vape cloud is insane. A Golf is the last car on Earth you’d expect form-over-function design from.

I reserve a particular loathing for the haptic steering wheel buttons which activate the heated steering wheel every time we go left, and mute the radio volume when turning right. One day I’ll find out who thought of that, go round to their house and unscrew every single light switch. Maybe carve all the buttons off their telly remote with a cheese knife. See how they like it.

These common sense FUBARs aside, the Golf remains easily the quicker, quieter, more supple, more spacious and mature machine when you’re doing the school run/commute/garden centre chores, and that’s arguably more fitting of a £40,000 posh-rocket than the brittle Benz. Or you could contend you’d prefer life with a bit more bite. Sound like you? Buy the more expensive yellow one.

The AMG is tiring, but it's the more immediately engaging personality. I like it a lot more now on second meeting than when I first drove one. Cars like this won’t exist much longer and I’ll miss it when it’s gone.

But the new Golf R has the breadth of personality in its locker to be a grown-up’s run-around and yet... (unlike the overly polite BMW M135i and Audi S3) offer layers of handling panache to uncover when you’re in the mood to exploit its monumental cross-country pace. It just does everything.

So, it’s the Golf R that edges this showdown over the car playing the imitation game. I’ve just remembered the internet’s other purpose though: polite online disagreement. Do your worst. 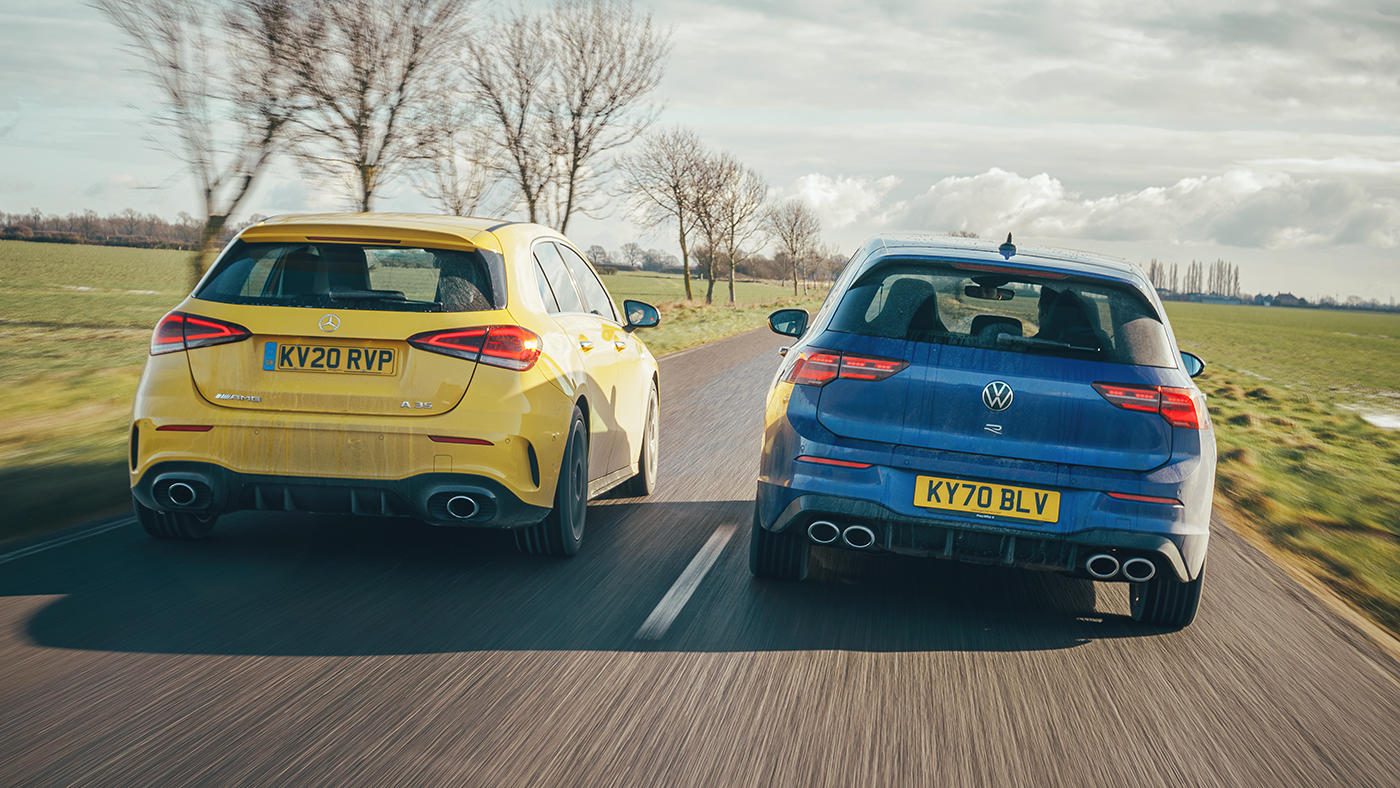