Which of the posh hot hatches with honorary British citizenship is best to drive – and buy? 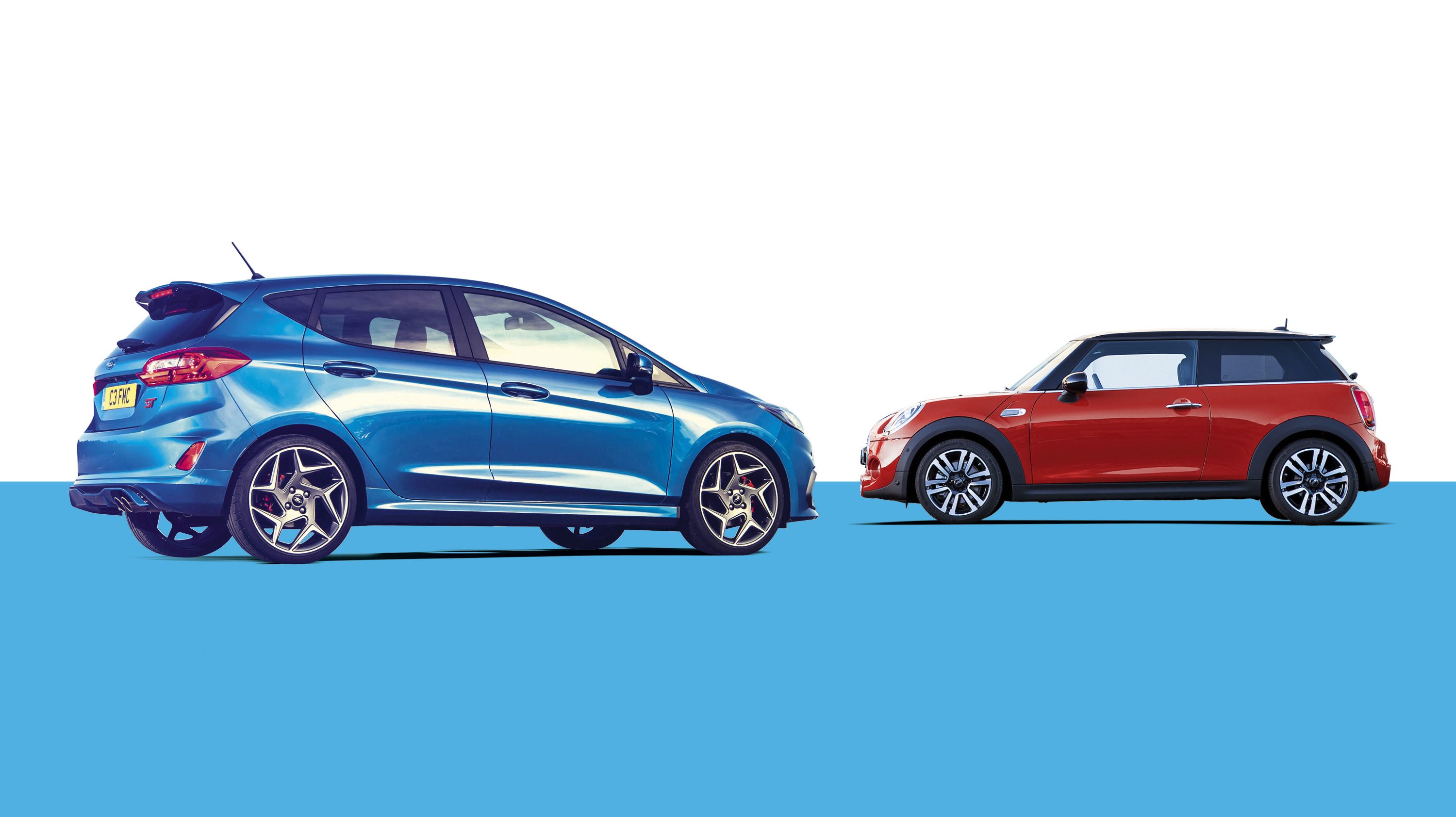 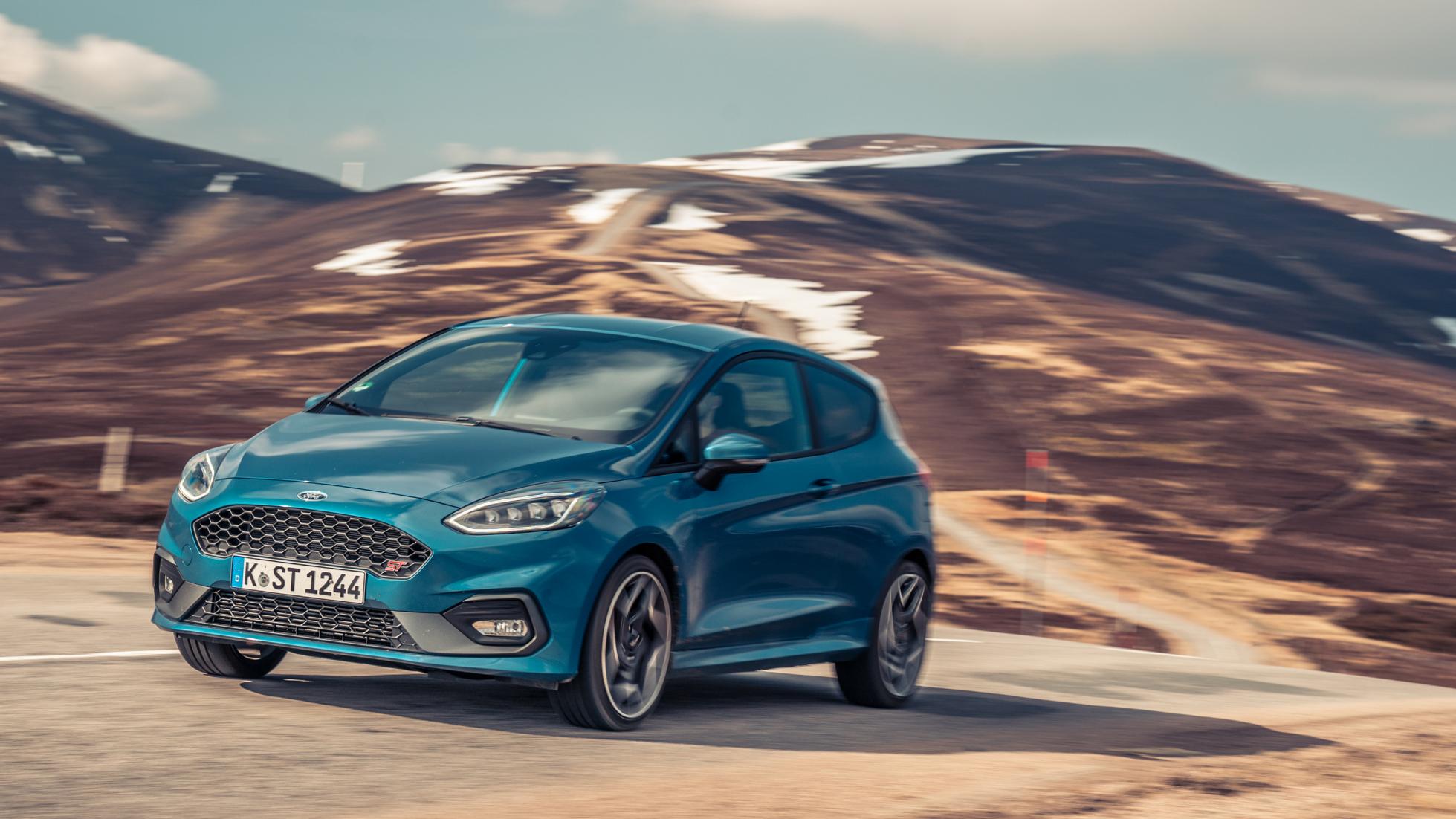 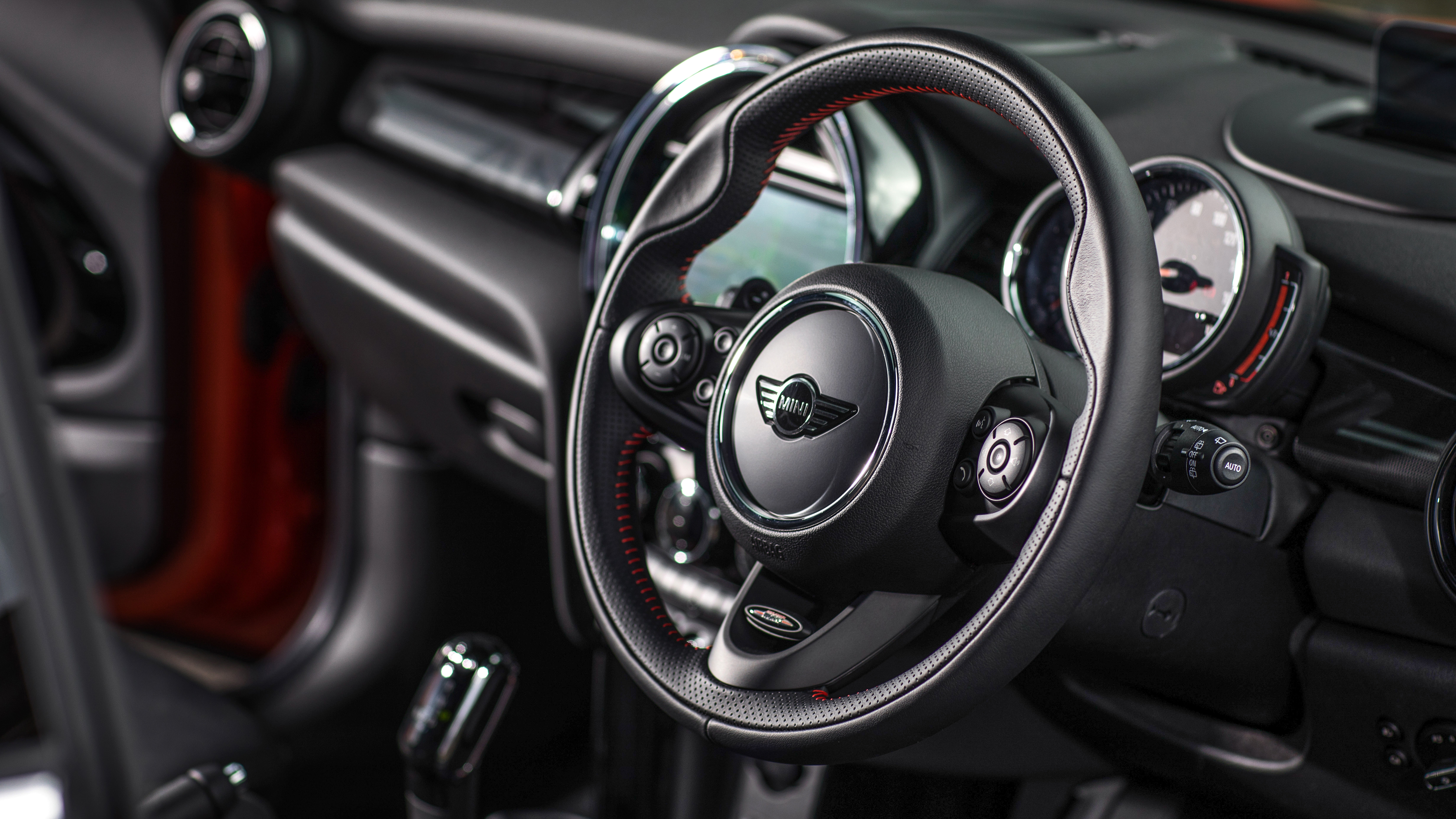 You know by now, thanks to Top Gear’s various adventures with the new Ford Fiesta ST, that said fast Ford is a good’un. But is it a bargain?

The base price is £18,995 (before Ford’s infamously philanthropic discounts), and that’s pretty reasonable for the best small hot hatch in the world-elect.

But that’s for the starter ST 1. The STs you’ve seen us adventuring in, and the one in these pictures, is an ST 3. Because with the last, wildly popular Fiesta ST, Ford noticed something important. Most people ignored the ST 1, bought an ST 2 then optioned it up with a better hi-fi and parking sensors. So this time, there’s an ST 3 from launch.

This top dog grade is like Tony Stark’s Iron Man suit in the latter Avengers movies. It can’t yet fly or fire missiles, but there are so many tricks and toys crammed in it’s unfathomable how they all fit under the metal skin.

We’ve lined up a Mini Cooper S to this Fiesta ST 3, because it offers a premium-feeling edge to the match-up, and they’re both honorary British citizens, even though only the Cooper S is actually built on this sceptered isle.

Because Mini’s BMW-shared engines are based on a 500cc cylinders-for-everybody policy, the Cooper S gets a 2.0-litre four-cylinder to lord it over the peppy, perky Cooper’s 1.5-litre three-pot. And yet, its 189bhp output is outstripped by the 197bhp Fiesta, which has – awkwardly – a 1.5-litre three-cylinder engine. A clever one too, with cylinder deactivation that helps for real-world 42mpg economy when cruising on two cylinders.

The Mini’s engine feels… lacklustre, after the rorty, keen-to-please puppy enthusiasm of the Fiesta. The sounds is anodyne and strained – a tad droney, really – and the revs tighten up, struggling at the top end, like a newsreader who didn’t take a big enough breath before starting to read their autocue. It gets the job done, and is capable of roasting the front tyres thanks to a lack of any launch control or front differential (both heaped into to Performance Pack STs). But there’s very little joy in how it goes about its business. Is that good enough in a fast Mini?

We’re not doing rhetorical questions: no, it ain’t. Partly, because the three-pot Cooper accelerates keenly and sings with zing. And even more partly because BMW can do so much better. What engine lives in the back of a BMW i8 and develops a healthy 228bhp and 236lb ft? That’s right – that very same 1,499cc triple-banger. Imagine that lump slotted into a Mini…

Enough fantasising, I’ll concentrate on what we’ve got. Besides the new taillights and revamped iDrive, Mini barely changed the Cooper S in its 2018 facelift, and it’s a consistently strong-selling, slow-depreciating model, so there’s sense to minimal fiddling. It claims 0-62mph in 6.8 seconds (7.2 when we figured it, bonfiring the front tyres half of the way), and latest claimed economy is 44mpg and 145g/km.

In isolation, the not-changing-much is fine. We like the current Mini. I mean, we don’t like the way it looks, all bloated and caricatured and long of overhang, like Vegas Elvis. But it’s well put together inside, and it’s retained that addictive air of cheekiness to the way it goes down the road. The gearshift pops home gamely, the steering’s weighty and direct, the rear end feels ready to pivot, and it’s got a proper handbrake lever. If you want to pivot some more.

In isolation, it’s a chunky-feeling entertainer. Then the Fiesta wades in, and starts to expose where the Mini’s got fat and complacent. It’s not just the engine that doesn’t like being prodded with a stick. The Fiesta’s admittedly artificially alert steering and hilariously mobile rear end make the Mini feel flat-footed. It counters with a calmer low-speed ride. Then the Fiesta punches back with a naughtier noise, way less inertia in its power delivery, reassuringly solid brakes and a more positive gearshift.

You sit lower in the Mini, on a less pinched seat, feeling more enclosed in a car, instead of perched atop it. And yet, when you find that hallowed B-road, or more likely, just a clear roundabout that demands being bunged into, the Fiesta’s the one that hunkers down and dives in headlong. The Cooper S is never far behind, and its driver is more comfortable along the way, but all the controls and responses feel more rubberised and inert.

It also feels beefier, in part because the visibility is more letterboxes by the retro glasshouse. Its instruments are more cluttered too. In fact, bottom-troubling seats aside, the Fiestas interior has come on so far in this generation, particular in screen skills, I’m not sure I don’t actually prefer it. Curiously, both cars make the exact same ergonomic error – their respective mode switches for ramping up throttle response (good) and steering weight (boo) are tucked down low on the centre console. Good luck finding them as that deserted roundabout hoves into view.

As a drive then, the ST has the energy to overpower the more cumbersome Mini. It’s more accurate when you’re behaving and more chuckable to muck about it.

Despite the Fiesta being demonstrably, palpably, unarguably A Very Good Thing, there will be folks who couldn’t possibly countenance shelling £22k on a Fiesta. Plus £850 for the Performance Pack that, in all honesty, you don’t really need. And £745 for the Ford GT supercar-esque Performance Blue paint. Oh, and plus £100 for the uber-cute pop-out door protector feet that prevent door dings and amuse children (and grown-up Top Gear road-testers). Yowch. This is a £23,840 Fiesta now. Fancy going premium?

Well you can’t have the criminally underrated Audi S1, because Audi’s done a new A1 that’s all frowny and edgy and the S1’s out of production. And you can’t spend £24,030 on a DS 3 Performance because that would mark you out as a certifiable lunatic. The posh Citroen’s intergalactically more talented cousin, the Peugeot Sport 208 GTI, has just gone off sale for good.

You could spend £21,520 on the new VW Polo GTI, its tartan seats powered along by a fulsome 197bhp 2.0-litre engine, matching the Fiesta ST’s power with an engine the same size as a Mk5 Golf GTI’s. Bargain! Problem is, the Polo GTI’s chassis gets out and parties less often than Julian Assange, it struggles for traction, and it’s only available with a DSG gearbox that’s apparently ingested sleeping pills crushed into Red Bull. Spoiler alert indeed.

And so, for a premium, posh, kitted out angle on small hot hatchery, you end up in a Mini dealership. A 189bhp Cooper S costs £20,635 – standard, but no such Mini exists. By the time you’ve added stripes, better iDrive, a hi-fi worthy of the Ford’s (courtesy of Harmon-Kardon) and a few choice driver assists, you’ll be lucky to squeak a Cooper S under £24k.

Monthly payments? Not very Top Gear, I admit, but hey, this is how everyone buys cars now. For a £2,500 deposit and 10,000 miles a year, a five-minute Google offered me either for £320 a month, without even trying to shop around. I swear you can spend more than that on Spotify, Netflix and Sky telly subscriptions.

All very evenly matched – the Fiesta will be cheaper to run, but you’ll have more cash back at the end from selling a Mini, if you bought it outright. But the Fiesta is a more complete all-round machine, and the winner. Especially if you dispense with some fripperies and bag the ST2…