James May on: global design | Top Gear
Advertisement
James May

James May on: global design 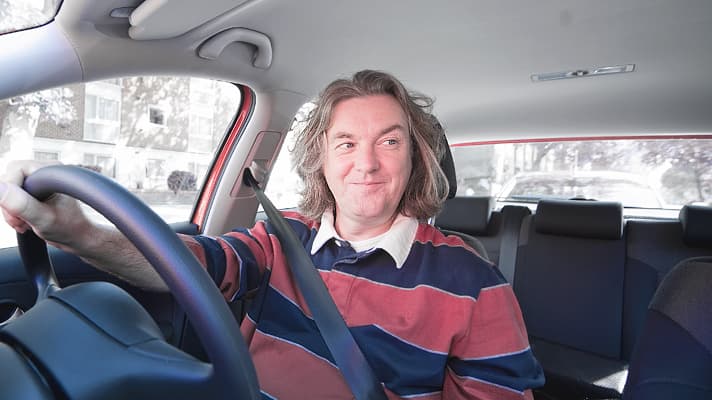 I'd never ridden a Harley-Davidson Sportster, which  is an odd state of affairs.  I’ve been to the US a lot, and I’ve tried lots of motorcycles, but never the one that says “American bike” like plastic cheese says “American dining experience”. So I borrowed the 1,200cc V-twin for the day and headed into the hills.

Up ahead, Richard Hammond was on an even bigger hog; something like the Heritage Big-Boy Bob-a-Job Fat B*****d. The motorcycle seemed to have run away by itself.

After a couple of hours, we stopped and swapped. Then, after another couple, we stopped for a cheeseburger. The Sportster, we decided, was the default Yankie Mo’cycle, the one you get if you ask someone to pick up a bike for you when they pop out to the shops for groceries somewhere in the Midwest. Over here, a Harley Sportster is a statement, but over there, it’s kinda like a bike. We named it Postman Harley. I can’t remember a time when some incarnation of this bike wasn’t in production.

Usually it happens in a restaurant or hotel,  maybe at a sporting event. Now it was while I  was pulled over at the roadside, but the question  was the same: can Europe and the US really be  so far apart? Their tomatoes are big and bland,  while ours are small and intense, because America celebrates excess while we celebrate flavour. We  like to eat strawberries in strawberry season from  a punnet, for sheer joy, whereas an American strawberry is a decoration or votive offering  that’s as likely to appear on your returned laundry  as it is on an omelette. Perhaps more importantly, their roads are broad and largely straight, while  ours wander around, still in thrall to some ancient itinerants who trod the first routes.

Maybe this explains it. Bikes from small countries – the UK and Japan, for example – are shaped by matters of efficiency, of dealing with scarce fuel, expensive resources and unexpected turns. Lightness, sharp handling and high revs in exchange for displacement are the result. A bike should to some extent, and perhaps to a large one, be minnow-like.

But America is big, and even if you start in the right state, the way to San Jose is likely to be a long ride, so you may as well relax. So you sit far back and low, feet forward. The bars are broad and the steering responses are leisurely. You could probably take your hands off and have a bit of a kip. I bet people have, but I bet they woke  up still rumbling along on a Harley.

Meanwhile, in the Old World, we are bolt upright at best, and on my own Triumph I’m spinally extended into a yogic pose. Now Hammond tells me this goes back a lot further than the dawn of internal combustion, because the cowboys of the Wild  West rode like this, stirrups extended, slumped  in the saddle for days on end, one hand on the reins. So it might be Rocky Raccoon’s fault.

Again, everywhere is a long way away where Harleys live. The engine is massive, but not that powerful. The Triumph develops almost twice the power with not much more than half the capacity, and is a riot of mechanical action. Progress on the Harley is achieved one firing stroke at a time, each one an event in itself rather than part of a bigger scheme. I’m guessing the oil-change intervals are less critical than they are on a V4 Honda.

Gearchanges? You might need one occasionally. On a Japanese crotch-rocket, it happens a lot, and takes a stab of the toe. On the Harley, I lifted my leg from the peg, performed a flourish with my ankle, and stabbed the next one home. That’s as it should be if it only happens after 300 miles on an interstate.

I found myself lovin’ ma hog. The road and  the scenery helped, as ever, and the pure pleasure of riding along displaced any real concerns over motorcycle technological progress or the finer points of dynamics. Funny, isn’t it? I’ve always looked at them and thought them ridiculous, at least at home. Unsuited to our European sensibilities. Bulky, slightly crude, more a badge of nervous  midlife than a means of sustaining the biking muse.

But maybe I’m ready now. The big V-twin is not a perfectly balanced 90-degree job. It’s a thumper, transferring its mechanical shortcomings to bars and pegs, which vibrate. But this is a good thing. I’m 51. I knew I was still alive.