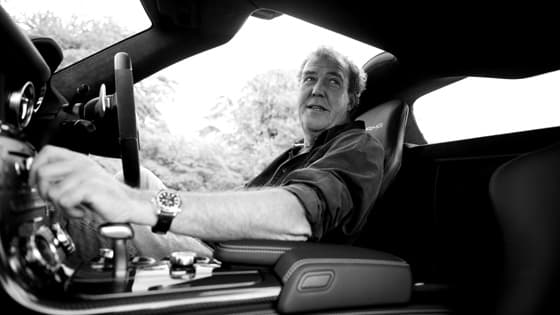 As we know, the Ferrari 250 GTO is widely regarded to be the best, most important Ferrari ever. Unfortunately, I cannot verify this, because the BBC is not rich enough to pay the insurance premium should I ever get behind the wheel. But I do know one thing. It produces just 295bhp.

So, let's just get this straight. The best car ever made in the whole of the history of the world produces fewer horsepower - a lot fewer - than a hot Ford Focus.

In the desert playground of Qatar, this, of course, is a ridiculous notion. The best car, there, is the car with the most horsepower. Horsepower is everything. Horsepower is the mechanical embodiment of your scrotum. He who has the most is the best and the strongest and the most handsome.

In the old days, it was top speed that counted - specifically, how high the numbers went on your car's speedometer. My Dad's Ford read to 120mph, so he had a bigger penis than John Forrester's dad, whose Sunbeam speedo only read to 90. In my 11-year-old head, this was a fact.

But it costs carmakers a lot of money to buy components that can handle truly high speeds, so most these days are limited to 155mph. This means everyone's genitals are the same. And it's the same story with acceleration. I remember genuinely believing that I was better than my mate because my Scirocco did 0-60 in 7.9 seconds and his Chevette HS took 8.3. Now, though, cars get to 60mph in the time nature's little foibles will let them. Nought-to-60 is no longer even remotely relevant in the schoolyard. Or the pub. Or even in Qatar. Nope. It's horsepower.

The car companies know this, which is why there's an inexorable quest to find more. The EU may be jumping up and down and pointing at polar bears and holes in the ozone layer, but while engineers know their next engine must produce nothing but daffodils, they also know that if it doesn't produce more power than the last one - which belched out a cocktail of coal and acid - they will be finished.

I first noticed the problem when driving a Brabus-tuned Mercedes SL a couple of years ago. It produced 730bhp and nearly a thousand torques. These are the sort of figures that can cause a tent pole in your dish dash. But sadly, they cause even bigger issues on the road. The car was nigh-on undrivable.

Initially, I thought that maybe Brabus had had a bad day, and that it simply wasn't thought out properly, but later I tried the 660bhp AMG-tuned SL Black. And that was just as bad. It was like driving a turbocharged whale.

It rolled about when you asked it to go round a corner, and any attempt to balance the car with some throttle was futile. It was like trying to balance a screaming baby on a baseball bat.

Maybe, I thought, the chassis of the SL is simply not capable of dealing with such big numbers. It was a plausible thought. It's acar for dentists in Houston, and not steely-stomached young racers such as myself.

However, more recently, I tried the Ferrari 599 GTO, which also produces 660bhp, and that didn't work either. And the 599's chassis was most definitely not designed with Texan mouth-men in mind. It was designed, as we know, for the owners of carpet warehouses in the North so that they could pretend they were Michael Schumacher.

Well, I'll tell you what. If it even looks like rain and you pretend to be Michael Schumacher in a 599 GTO, you will end up in a tree.

Big horsepower numbers may sound enticing, but, on the road, you need some rubber in the bushes and some give in the suspension. Plus, you need tyres that won't wear out after 15 miles and steering that doesn't go from lock-to-lock in half-a-turn. And these things just fall to pieces when you introduce them to 660bhp.

Yes, I know the Bugatti Veyron works on the road, and it has a thousand horsepower. But that's why it costs a million quid. And that's how much you have to spend if you want to play high stakes in the numbers game. If you want to spend less than a million on a car, then I reckon the realistic top whack is around 600 horsepower. Plainly McLaren thinks so too, which is why their new car sits just under this magic number. So does the 458. So do all the really great cars.

So now we are in a tricky spot, because BMW and Audi and Mercedes are all selling cars that develop 500bhp. And if they continue to compete, they'll be above the 600 mark soon. And then what? Every estate agent and banker in the land will be smeared up a lamp-post.

The Germans are obviously aware of this, which is why I see they are now competing to see who can fit the most powerful stereo. Though last time I looked, it was Jag in the lead with 1,200 watts. That's enough to take your whole head off.

But we're not really interested in how loudly we can play Jeremy Vine while driving to a lunch appointment. They may as well compete by saying: "We have more gears than they do." Oh, I forgot. Lexus is already doing that.

However, we do need something to replace horsepower in our imagination, because cars with more than 600 horsepower are dangerous. And, if they're limited to 155mph anyway, completely pointless.

Decibels? I think not. We'll leave that to the homotorcyclists. Lightness? Boring. And anyway, you eventually end up back in a Citroen AX. Emissions? Oh, give me a break. You really think normal people are going to run about saying: "My dad's car produces less carbon dioxide than your dad's car".

No. I think I have it though. Price. Yes. Let's stop telling the carmakers we want more power. We have enough already. Instead, let's tell them we want to pay less money. Because, let's not forget, when it was new, the 250 GTO cost £6,000.