F1 vs NASCAR: which is better? 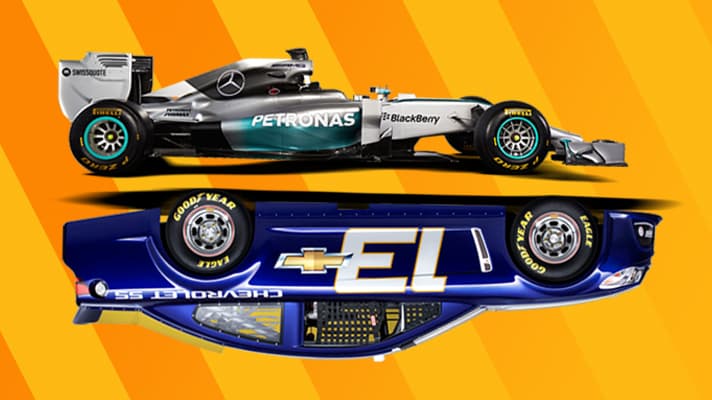 When it comes to Formula One versus NASCAR, you can be as rude as you like about the other side. Many people are - and you know what they say...

F1 is dull. Nobody overtakes, and the same bloke wins every week. It's hideously expensive. The cars are ugly. And the rules? No idea. And yet, each year, the cars and drivers are shipped, trucked or flown to 19-ish countries, where up to 300,000 people watch them race from moored yachts or muddy fields. The whole business makes about $1.5 billion per year. And around the world, nearly half a billion people watch at least 15 minutes of racing at some point during the season.

NASCAR sucks. They only turn left. The fans are fat. The drivers are fatter. The cars are made from pig iron and scrap. And yet each race is beamed to 150 countries, attracting about $3 billion in annual sponsorship from McDonald's and Budweiser and other brands that keep the audience plump. About 75 million American adults - that's one in three - consider themselves fans, and about 3.5 million pack the bleachers of the nation's speedways every year.

But look past the hard-earned stereotypes, and you'll find a reason to like both. Yes, F1 cars are made in whitewashed labs by mad professors. And NASCARs are knocked up in medieval foundries by men with mallets. But if an F1 car is a lunar module, a NASCAR is the rocket beneath it. Both deserve our respect.

They grew up at the same time but in very different ways. One began with moonshiners running loops around dirt tracks; the other with wealthy playboys armed with sports cars and twisting street circuits. Even today, their respective feeder series follow a similar plan: dirt racing for oval racers, costly karting for single-seaters. It's cheap versus elite. Hot dogs versus hors d'oeuvres. Yes, there are exceptions to the rule, but when's the last time you saw a blue-collar kid in a McLaren? (OK, Lewis wasn't exactly from wealthy stock, but he was hardly from the wrong side of the tracks either).

In NASCAR, if it ain't rubbin', it ain't racin'. Drivers bully through a vast swarm, and if you start at the back, you might still finish first. Try doing that in F1, and you'll be picking carbon splinters from your face. In NASCAR, telemetry is banned, and where F1 has laptops, NASCAR has hammers and spanners. An F1 driver can tune his car on the go. Once up and running in a stock car, the only thing you can adjust is your attitude. But if you think that sounds easy, you try setting up a car for a 200mph lap of a steeply banked oval. During a race, a NASCAR's chassis is literally bent by the centrifugal force of orbit.

Formula One designers fight a constant war on the atmosphere, with pointy bits and rude noses to slice the air. This leaves behind messy turbulence, which makes life harder for the cars behind - unless they get seriously close and risk a rear-ender. A bluff NASCAR leaves behind a cleaner pocket, which the following driver uses to gain a few miles per hour (the car in front also speeds up a bit as the vacuum pushes him along). But while you tailgate the car in front, the bloke behind is doing the same to you. It's why they swap positions so often. In 2011, F1 saw about 80 genuine overtaking manoeuvres in the whole season. That year, NASCAR saw 88 lead swaps... in one race.

When an F1 driver brakes at the end of a straight, his body is tormented by a force of 5g. Brake discs are made by firing carbon atoms at a cobweb of rayon, and they cost a small fortune. Over in NASCAR, they make do with slabs of cast iron, but then again, they don't use the brakes much. Instead, a driver must keep his speed up, tempering the throttle and picking a perfect elliptical line for hundreds of laps per race. So while his diet might be a touch... carby, you can't knock his stamina. Especially as he must pump a clutch every now and then, unlike an F1 driver who has an easier job with paddles.

Very few people have felt these differences for themselves, and only one man has competed properly in both NASCAR and Formula One. He is Juan Pablo Montoya. "With NASCAR races being so long," he tells us, "it's important to be patient and understand how the track changes - but really, they're opposite poles," he says. "I remember the feeling of getting into an F1 car after the winter break and braking for the first time, and the grip... it was amazing. In NASCAR, the cars are very heavy and unpredictable, but it makes the racing great..."

Traditionally, a NASCAR shared much with its road-going counterpart. And while these days they can hardly be described as ‘stock', the shells do bear a slight resemblance to their buyable counterparts, and teams must choose from one of three basic chassis: Chevy, Ford or Toyota. The idea is the same as always: win on Sunday, sell on Monday. It's a similar deal in F1, though with cars sharing so little with what's on your driveway, Monday's shopping list is more likely to include a pack of fizzy pop than a new hatchback.

But enough of the economics. Because when you sit down in front of the telly on a Sunday afternoon, all you really want is a good show. NASCAR nails that one with the smoke and noise and fist fights. But - like any great performance - those boys make it look easy. Next to this, F1 looks a little more modest and, whichever way you cut it, more anorakish. But what you don't see on TV is the sheer effort and brainpower that goes into the creation of every tiny part. It's a lesson in particle physics to NASCAR's Big Bang.

NASCAR is America at its best. Formula One is science at its most acceptable. The choice is yours, race fans.