Yep, it’s a Bond special. And we’ve driven all of his greatest hits 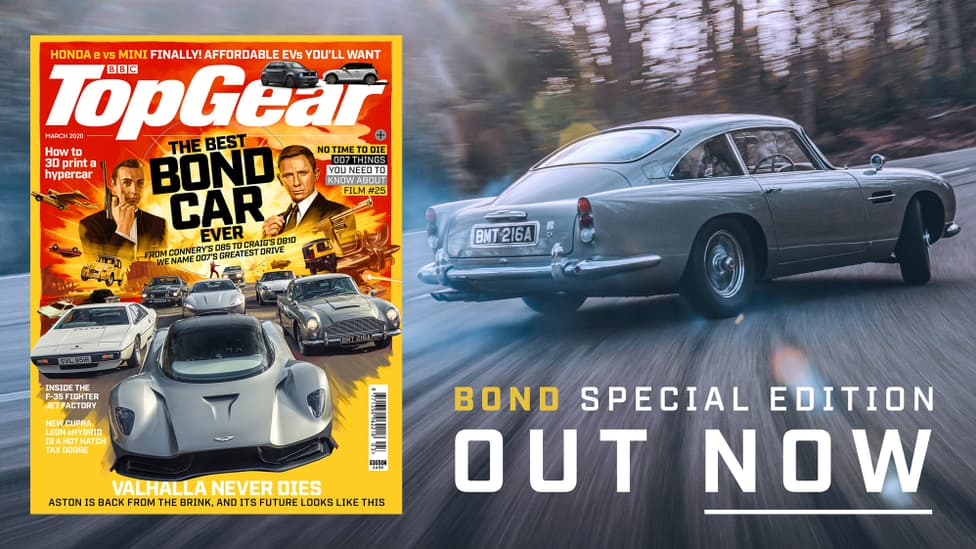 Apparently, a rather large film release is coming up. You may have heard of it. Said film has a couple of cars in it too, apparently…

Yep, Bond is back. No Time to Die – complete with its fantastic Billie Eilish theme song – will hit UK cinemas on April 3 and will be Daniel Craig’s last outing in the franchise. Sad face.

Still, how could we celebrate Ian Fleming’s famous man of some mystery? Simple. We picked the best Bond car from each actor’s time in the role, got them all together at a secret location and tested them until there was just one winner.

So, for our shiny new edition, please be upstanding for the Aston Martin DB5 representing Connery, the original DBS for Lazenby, the Lotus Esprit for Moore, the Aston V8 for Dalton, the BMW Z8 for Brosnan and the Aston DB10 built specifically for Craig and Spectre. It’d be fair to say our TG staffers were like the proverbial kids in sweetshops on this particular day.

And that’s not all. This month we’ve also got an exclusive interview with Daniel Craig, as well as updates from two of the men responsible for making all of the best crashy Bond stuff happen – stunt co-ordinator Lee Morrison and stunt driver Mark Higgins. Want to know how that epic motorbike jump in the trailer was filmed? Best grab yourself a copy before they’re gone.

There’s all of your usual TG goodness this month too, including a rematch between the Lockheed Martin F-35 fighter jet and the McLaren Speedtail – the first round of which you no doubt saw on TGTV. For Round 2 it’s all about the engineers who build these incredible machines, as we take a behind-the-scenes look at both factories to see which goes from concept to reality in the shortest space of time.

Then there’s the one many of you will have been waiting for. Yep, we’ve finally been able to get behind the wheels of both the Mini Electric and the Honda e – perhaps the two most desirable upcoming EVs. And speaking of EVs, this month we’ve also been behind the wheel of both Hyundai and Nissan’s attempts at making fully-electric touring car-style racers.

Plus, if you’re feeling the need for a bit more internal combustion there’s good news, because we’ve got the full lowdown on a brand-new 1,174bhp V8-engined hypercar and a drive of the last prototype Bugatti Veyron alongside the only ever racing EB110.