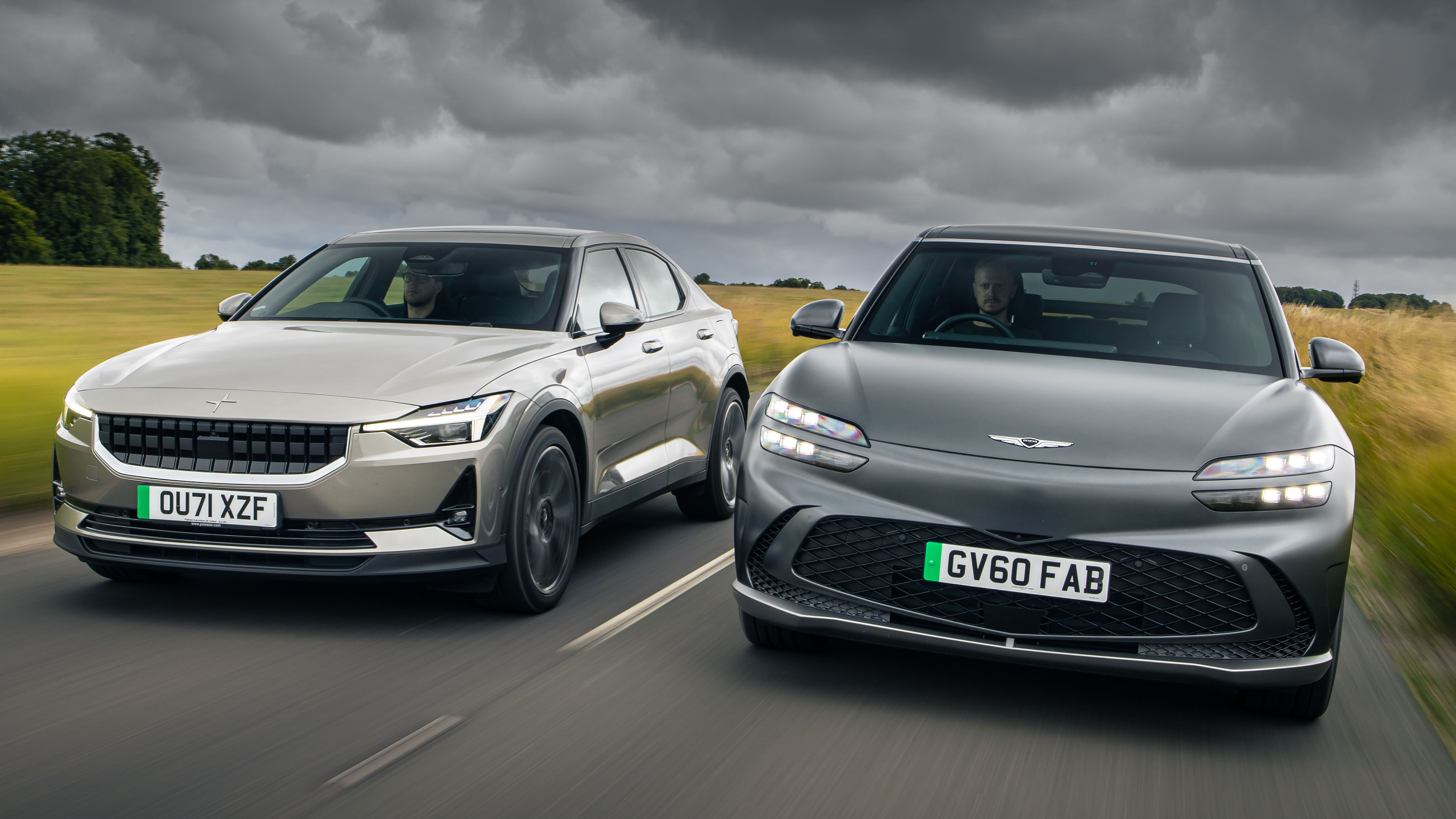 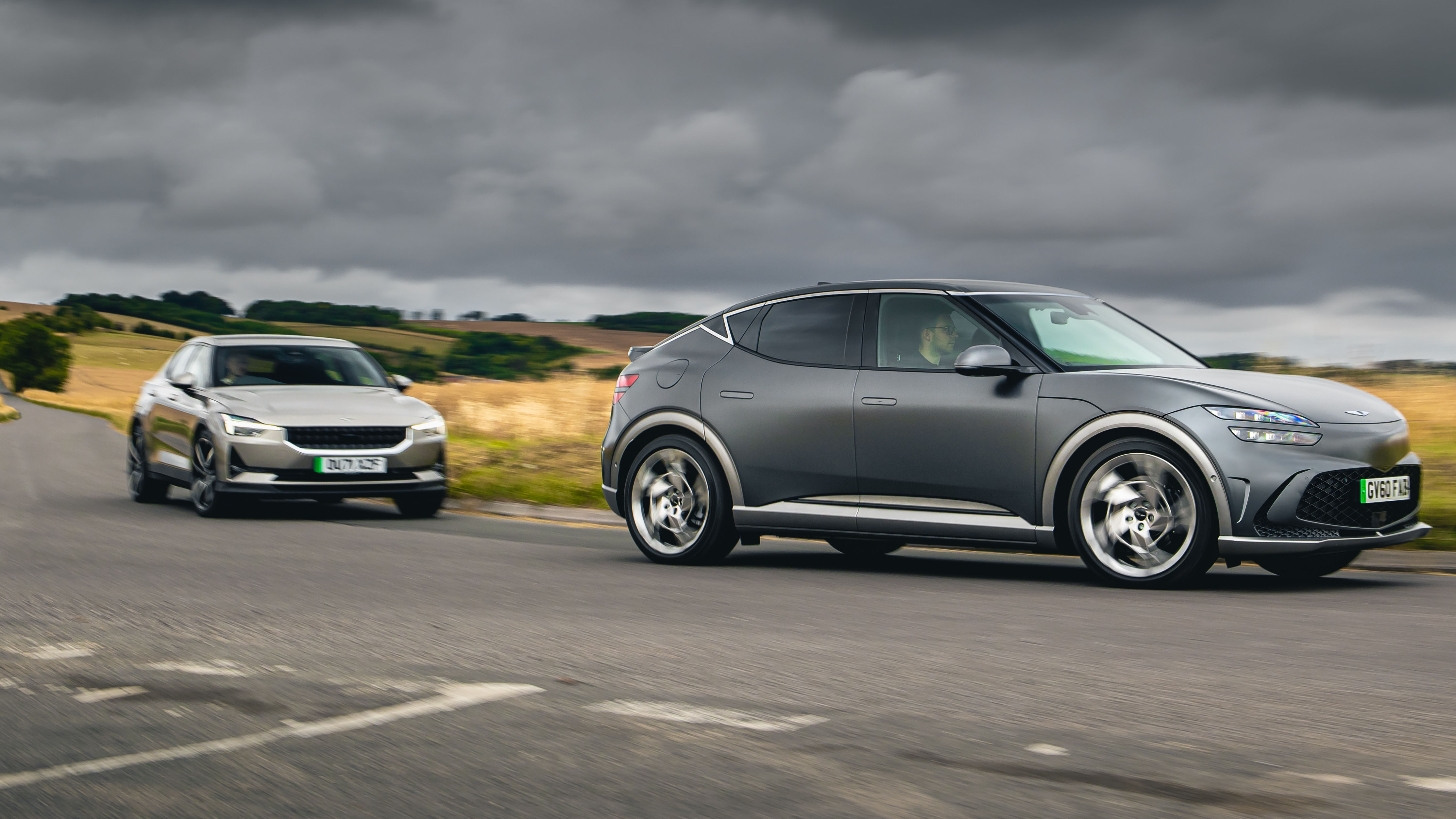 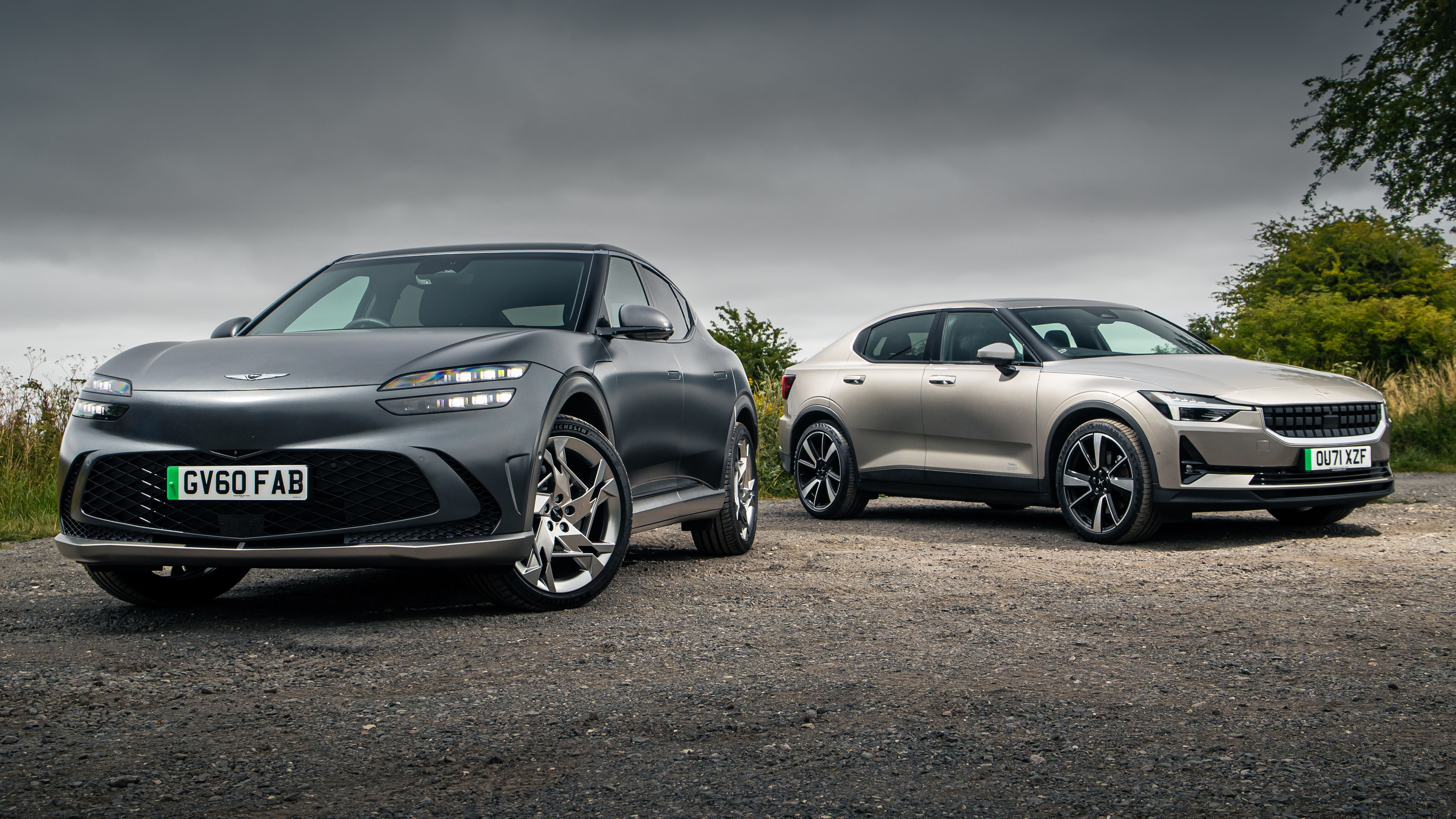 Ever feel like you’re getting old? Look, here’s two car marques which didn’t exist here three years ago. They grow up so fast…

Oh, sure Polestar was already Volvo’s racing team and go-faster division before its Doctor Whovian electric regeneration, and Californian dentists had access to a Genesis, but in the UK these are brand-new, um, brands.

The new GV60 doesn’t look familiar – in fact, to several confused passers by this morning, it apparently looks like a little Bentley. But behind the copycat badge, the Genesis is a car you’ve met before.

Being an offshoot from the Hyundai mothership, the GV60 is supposedly the posh, premium, Taste-The-Difference version of the Hyundai Ioniq 5 and Kia EV6. Same battery, same motors, same high-voltage charging gubbins that allow the GV60 to offload its own juice to power up a nearby appliance. Or an EV that’s stranded, if you’re feeling philanthropically generous. Strangely, not a feature offered by any electric Audi or BMW. 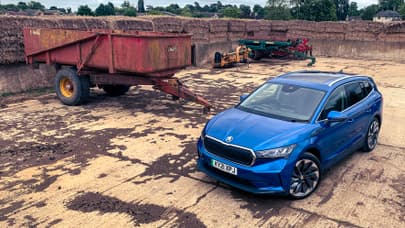 Goodbye Skoda Enyaq: did it convert our EV skeptic?

Meanwhile, the Polestar is also a fan of recycling. It borrows a base from the Volvo XC40, and shares electro-drive components with its Swedish overlords – see also the XC40 Recharge and coupeish C40.

I’m not sure that matters, though. Aspirational Audi buyers have never been bothered their A3 shares a chassis and powerplants with Skoda’s cheaper, more spacious Octavia. If anything, EVs force premium car designers to work harder to justify existing at all.

To add some needle to his battle of the newbies, we’ve mix‘n’matched the specs. Mostly, you’ll have seen the Polestar 2 with Performance Pack in these pages – we also ran one as a long-termer. The headline act of Polestar’s range, it boasts 402bhp through two motors, 20-way manually adjustable suspension you’ll never touch, and dubious coppery detailing.

Our suspicion has always been the regular single-motor, £46,450 Polestar 2 Long Range with the 78kWh battery would be the smarter buy. It saves you £8,000 on the retail price (around £60 per month on finance), gives away 240bhp but breezes from 0-62mph in a fuss-free 7.4 seconds. Polestar claims a maximum range of 335 miles – around 60 miles further than the fast flagship.

This Genesis is The Quick One. The 400bhp one capable of 0-62 in 4.0 sec, complete with a Boost button the colour of a sour Skittle. It’s the range-topper, the one for grabbing headlines. If it can topple the most sensible, rounded, complete Polestar product, Hyundai-by-Waitrose is onto a winner. And if not, we’ll be testing cheaper GV60s than this £65,000 Sport Plus Dual Motor whopper soon, to see if there is actually a point to Genesis existing. On the evidence of the petrol offerings we’ve tried so far, it’s difficult to see why Hyundai has bothered ‘doing an Infiniti’, as it’s known in the business. 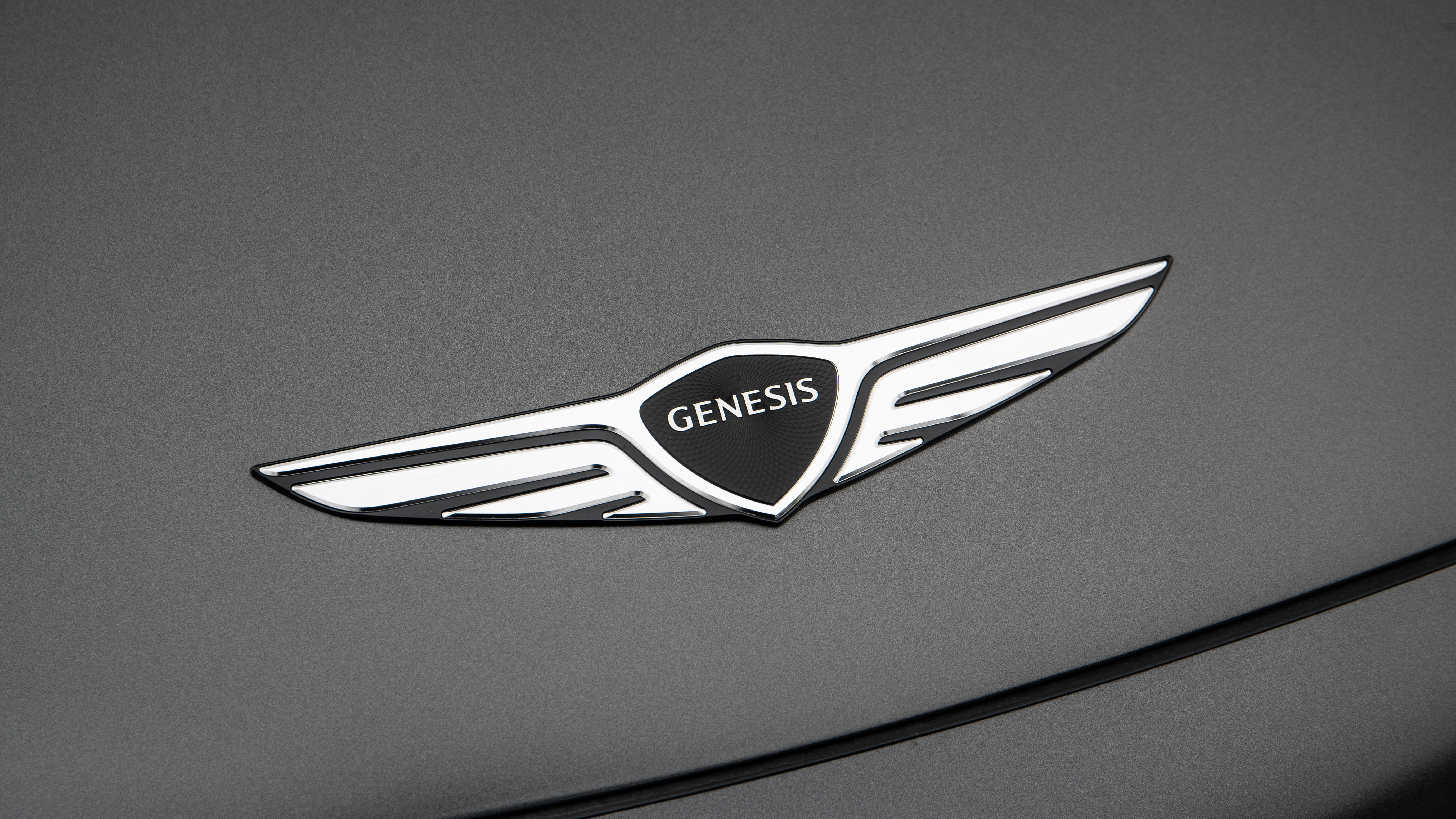 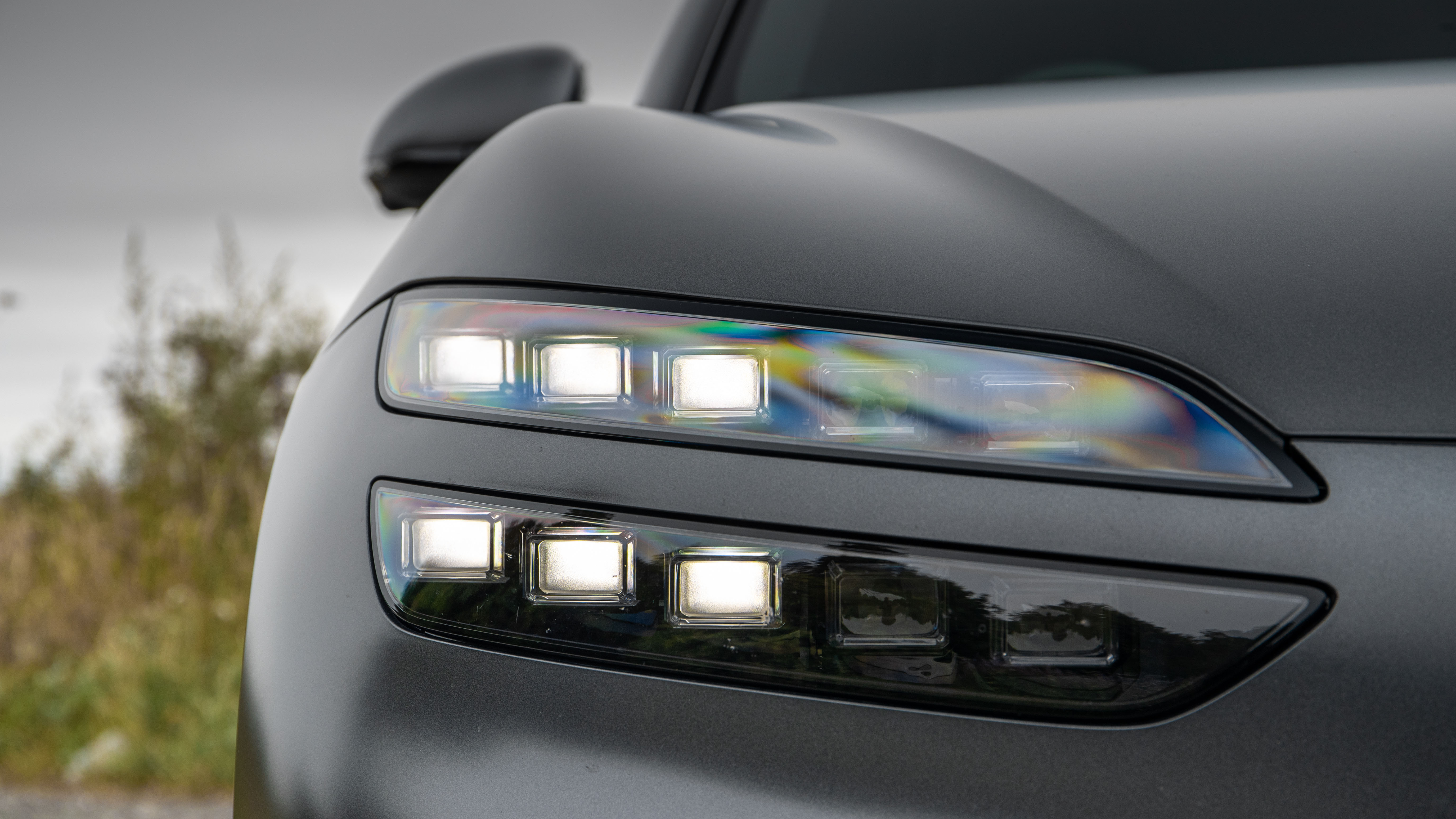 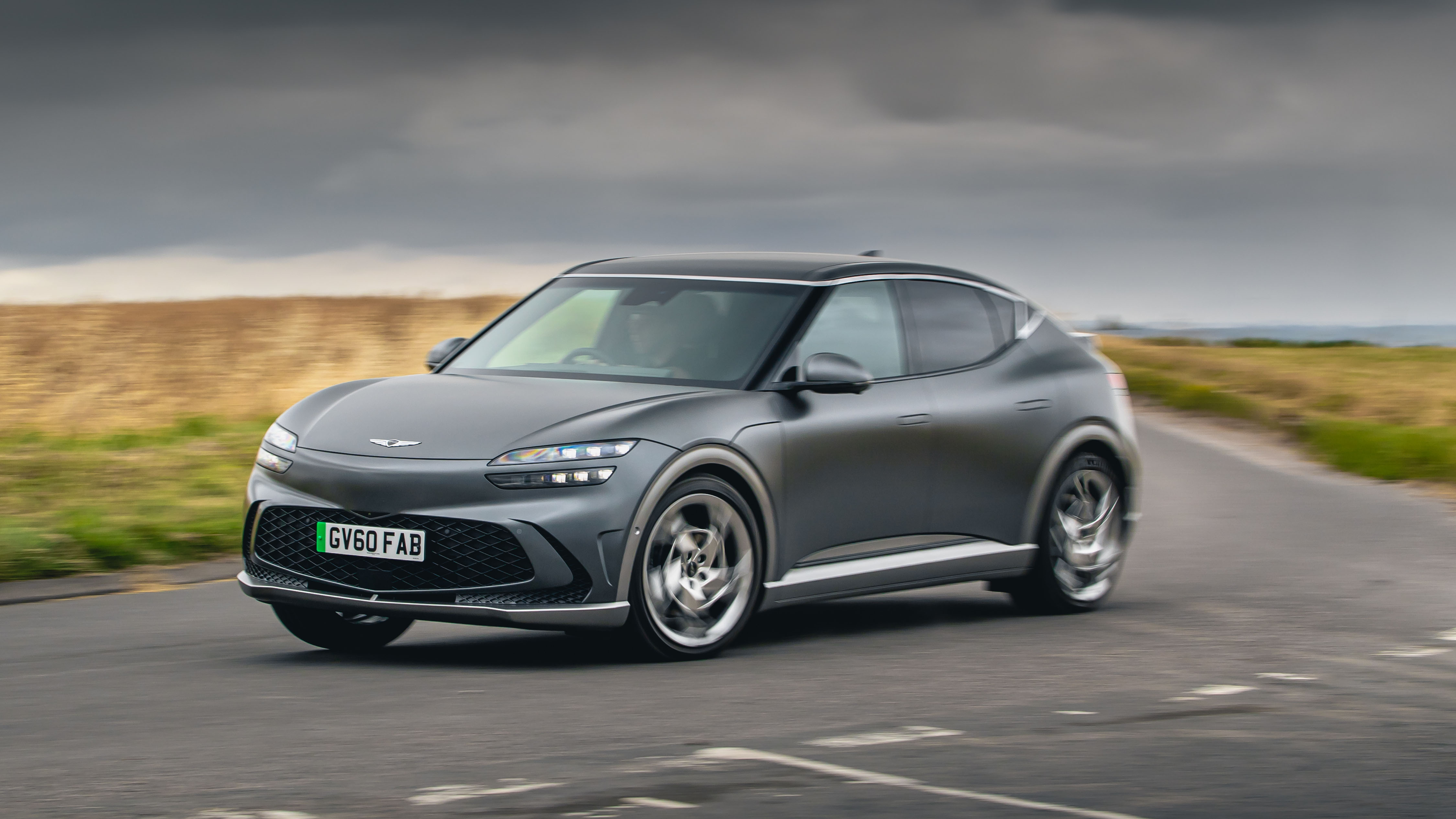 The GV60 announces itself with confident styling touches: the twin slashes of LED headlight mirrored by the rear lamps, the pebble-smooth flanks with flush door handles, that weird thunderbolt motif in the rear pillar. It’s the lovechild of a Bentley Bentayga and a Nissan Juke, even in horrid stealth grey paintwork. Like its Ioniq cousin, it fools your eyes into believing a full-size crossover that stands shoulder-height with a Range Rover Evoque is in fact a wee supermini.

Meanwhile, the Polestar 2 will start to age faster as other numbers join the family. The 3 is a rakish SUV that’s dropped all pretence of legacy Volvo design. The 4 will spoil the effect with a hateful coupe-ish ‘look Mom, I’m a BMW X4’ roof, and then we’ll forgive Polestar all over again when the new 5 saloon lands in late 2022. A stunner. The 2 is still clean, crisp and far more handsome than an amphibian Tesla Model 3, but not one person comes over and asks if it’s a Bentley. Or anything about it at all, in fact.

I’m drawn to the Genesis as well, with its mad wheels and its stupid spoiler right across the back window which was a dumb idea when Honda did it on the Civic 15 years ago. I like it though: much neater than the nonsense BMW’s currently trotting out. Tug a pop-out door handle and on the other side of the hefty door, there’s a heavily quilted leather seat that’s notably softer that the Polestar’s chairs, and a cabin rich in talking points.

The knurled (plastic) mirror controls, and the matching speaker grille on the other side that, um, falls off. The bizarre glitterball dash finisher. The huge twin screens sweeping atop the dash. The knurled (plastic) stalks. It’s trying very hard, but manages – just – to feel more expensive than the Hyundai and Kia, which is the whole point. Tap the start button and a bauble embedded in the centre console somersaults over to reveal your Park / Reverse / Drive selector. It’s wilfully silly, but there’s much more sense of occasion than in the Polestar, which doesn’t even have an on button. There’s just a sensor in the seat which detects when your bum hits it, and awakens the car.

As with other Genesiseseseses, there is way too much plastic pretending to be metal in the GV60, and money has been spent on other gimmicks like weird soundscapes that play the noise of a rainy forest or a busy café into the cabin. Really. But there’s also lots to like – tactile heater controls which you don’t get in the Polestar, a clickwheel so you’re not forced to jab at the touchscreen, and phenomenal amounts of kit. Heated and cooled seats, massage function, a fingerprint sensor to save driver profiles against, and a remote parking function that lets you summon the car forward and back via the key, so you can step out before it parks in a narrow garage. Smart – if you’re brave enough to use it.

One person’s feature is someone else’s gimmick, of course. The Polestar isn’t interested in being a meme on wheels. There’s really very little to talk about inside. The upright touchscreen is a big Android tablet than – at last – supports Apple CarPlay, and now reluctantly includes a Tesla-esque space-invaders game. I like how the gear-lever’s flat top works as a support for your touchscreen hand, and I like the clarity of its instruments next to the fussy Genesis graphics.  It’s a calming place to sit – ideal in an EV. 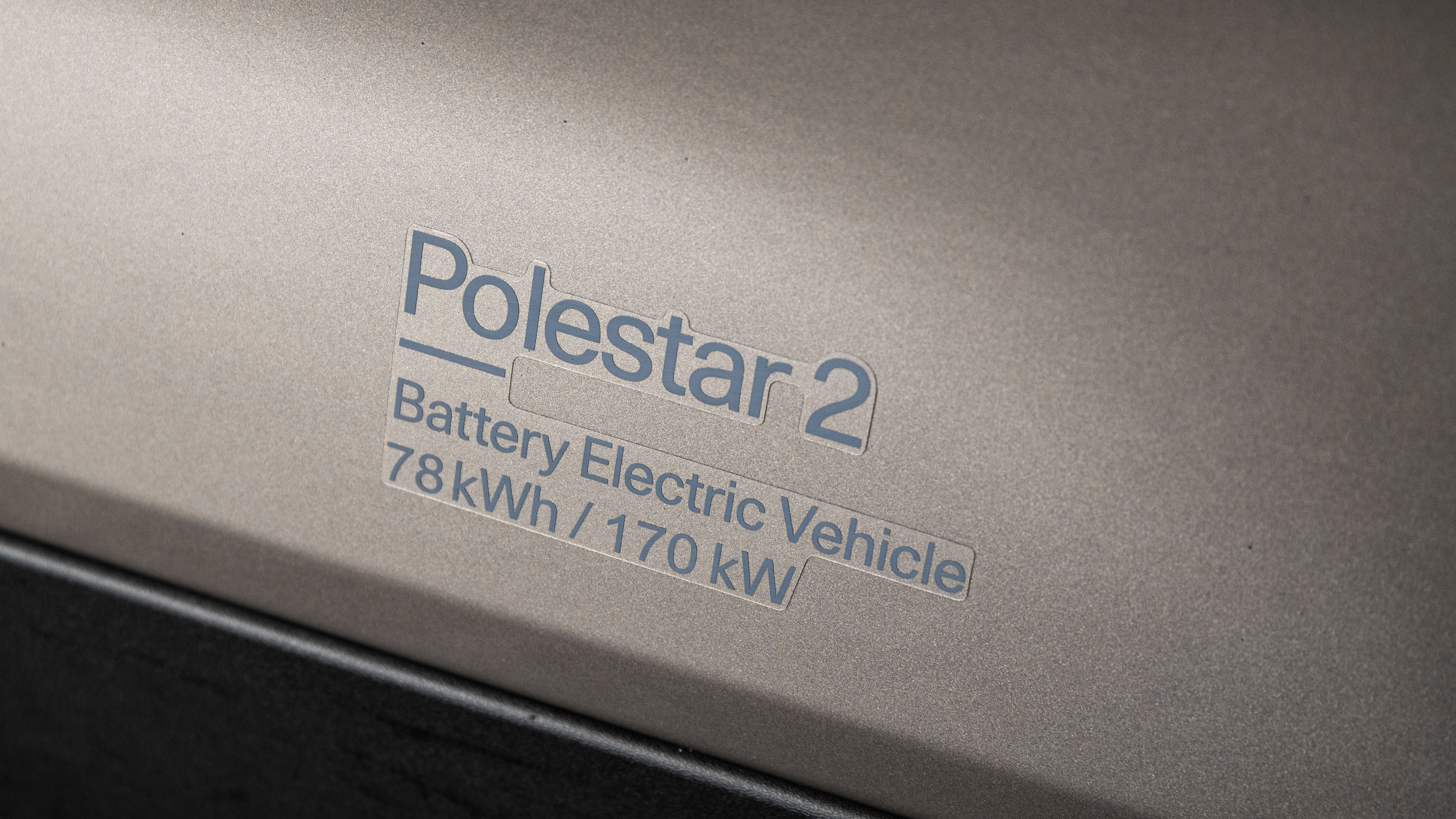 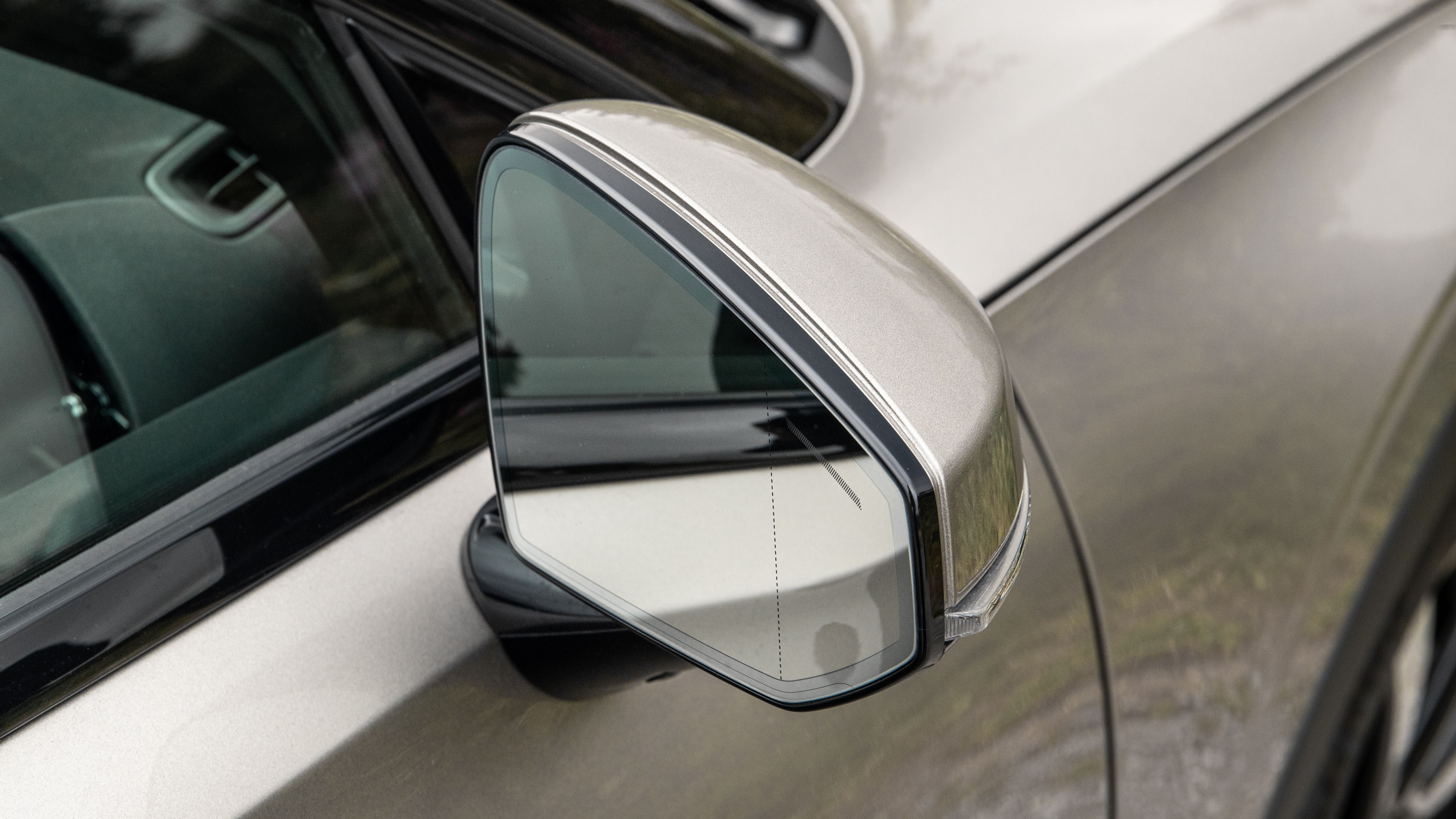 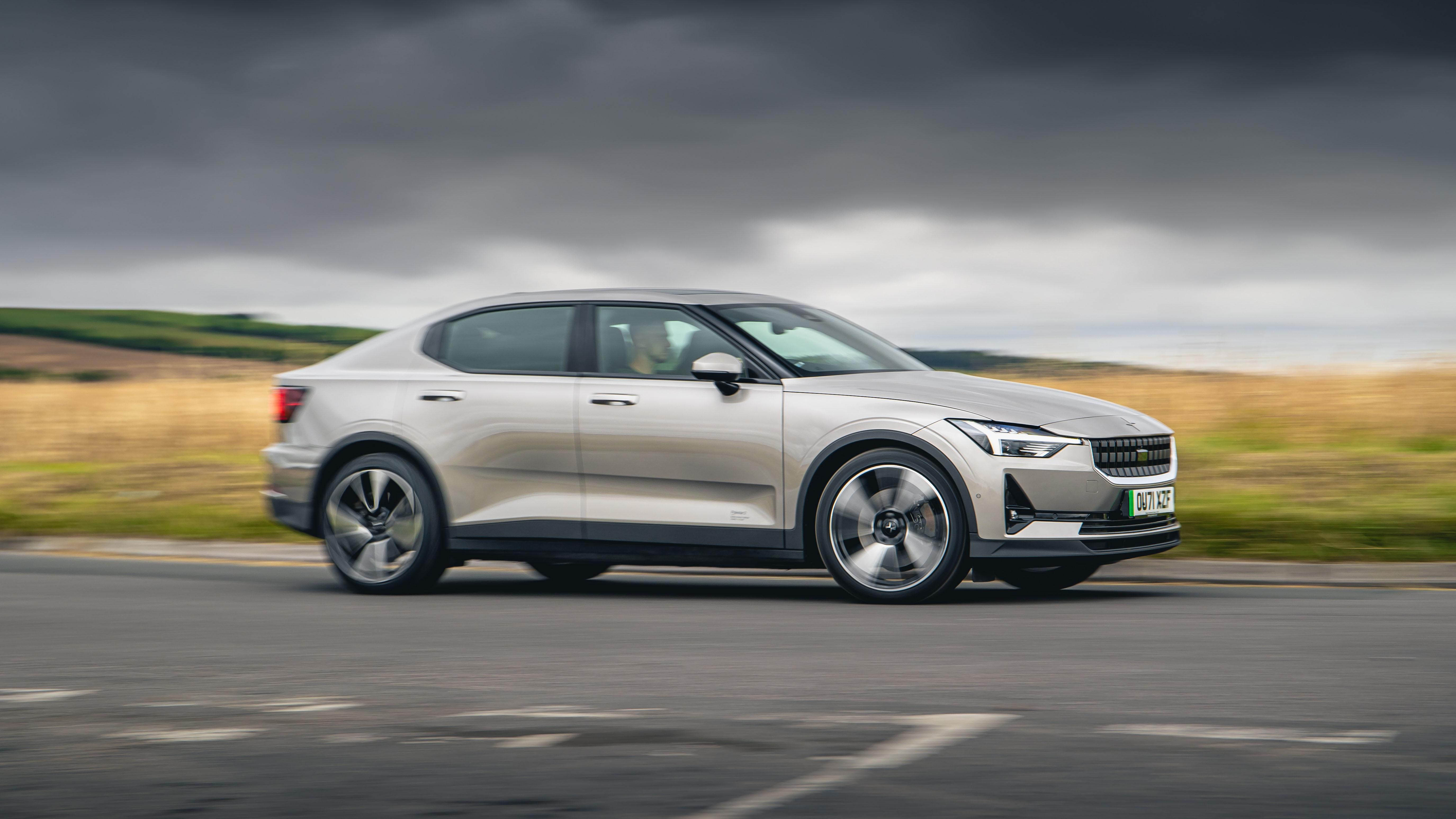 And that’s what I was expecting this watered down Polestar to be like. A Scandi chillout pod. But the ride spoils it. The Polestar feels like it’s got cheap suspension. It deals with the big stuff okay – crest a humpback bridge and it doesn’t slam its belly into the summit. But if there’s a pothole or a drain cover nearby, it’ll clatter and rumble across it. And as ever with an electric car, you really notice when a ride is jarring and noisy, because there’s no engine noise to muffle it. The Genesis is immediately more pliant, isolating its occupants from the road surface while they tune into the snowy village soundscape.

Go a bit faster – which it’s far too tempting to do in the GV60 – and the handling doesn’t keep up with the pace. Once you’ve jabbed the Boost button and been hurled forwards like a bowling ball, the GV60’s body control starts to flop and lollop around. If Rolls Royce made a hot hatch, this is what it’d feel like. Deeply rapid, but also rather boaty.

The Polestar’s a more sorted sports saloon. The steering’s crisper, there’s plentiful grip and the brake pedal slows everything down with a reassuring squeeze and very little re-gen interference. So while the Genesis is the quick one, it’s actually the Polestar that’s the sportier car here. The one you’ll enjoy actually driving, as opposed to simply nailing the throttle and revisiting lunch in reverse.

But don’t write the Genesis off as just a novelty act. It embarrasses the Polestar for rear seat space, because it’s got more legroom and a flat floor, while the Polestar has a transmission tunnel from the olden days. It’s also glassier, so children have a hope of seeing the scenery rush by. The Korean car also has the bigger boot. Both cars have just enough space under the bonnet to stuff the charging cable, but neither has a true frunk / froot. Worth saying too that both boast build quality to shame the last couple of Teslas I’ve driven. No dodgy panel fit or loose trim here.

To several confused passers by this morning, the Genesis apparently looks like a little Bentley

Overall the Polestar is made of superior materials and is a more mature drive. The Genesis is more fun, more frivolous, but slightly more practical. So which is the better EV?

Well, the Genesis averaged 2.7 miles per kWh, which is fine for a dual-motor crossover with big performance, but nothing remarkable. It promises a 225-mile range during the warm summer week it spent with TG, versus its claim of 289 miles. It’ll charge from 10-80 per cent in just 18 minutes on a 350kW charger you haven’t a hope in hell of finding, but it’s only 73 minutes on a much more common 50kW fast charger.

We’d expected superior efficiency from the single-motor Polestar, and so it proved, managing 3.2 miles per kWh on a lengthy steady motorway journey with the air-con running, dropping to 2.8 miles per kWh when it was being taunted by the GV60’s huge pace.  Polestar claims 3.6 miles per kWh and up to 335 miles of range, which deflated to 280 in real-world conditions. Both cars did respectably then, but it just goes to show how much endurance you sacrifice when you go for ‘the quick one’. Whether it’s a Polestar, a Genesis, a Mach-E or a Taycan, our preferred EVs remain the ones which are fast enough, while maximising range.

As these cars aren’t head-on spec rivals, choosing an outright winner is tricky, but what did emerge over a few days with both is how supposedly young brands can storm the EV scene and dominate the legacy carmakers first time out. We’ve been pretty underwhelmed by Genesis’s petrol and diesel offerings, but this GV60 feels like exactly the right product at the right time: a strangely charming, oddly characterful EV with solid underpinnings and more practicality than it might appear. Polestar’s 2 won’t go as far on a charge as a Tesla Model 3, or be as entertaining when parked up, but it does literally everything else better.

A winner? You insist? Oh, the Hyundai Ioniq 5. Looks cooler, is roomier, and costs £48k for the one you actually want. Right now, it’s the all things to most people EV choice.

Between these two, it’s a real personality split: the zaniness of the Genesis versus the considered, understated maturity of the Polestar. I’d go for the 2, then – though it’ll be interesting to see if the slower, less expensive GV60s feel like a sweet spot. Over the last few years, Korean cars have leapt from also-ran to class leaders, particularly in EV world – so this one’s worth taking more seriously than it appears to take itself. 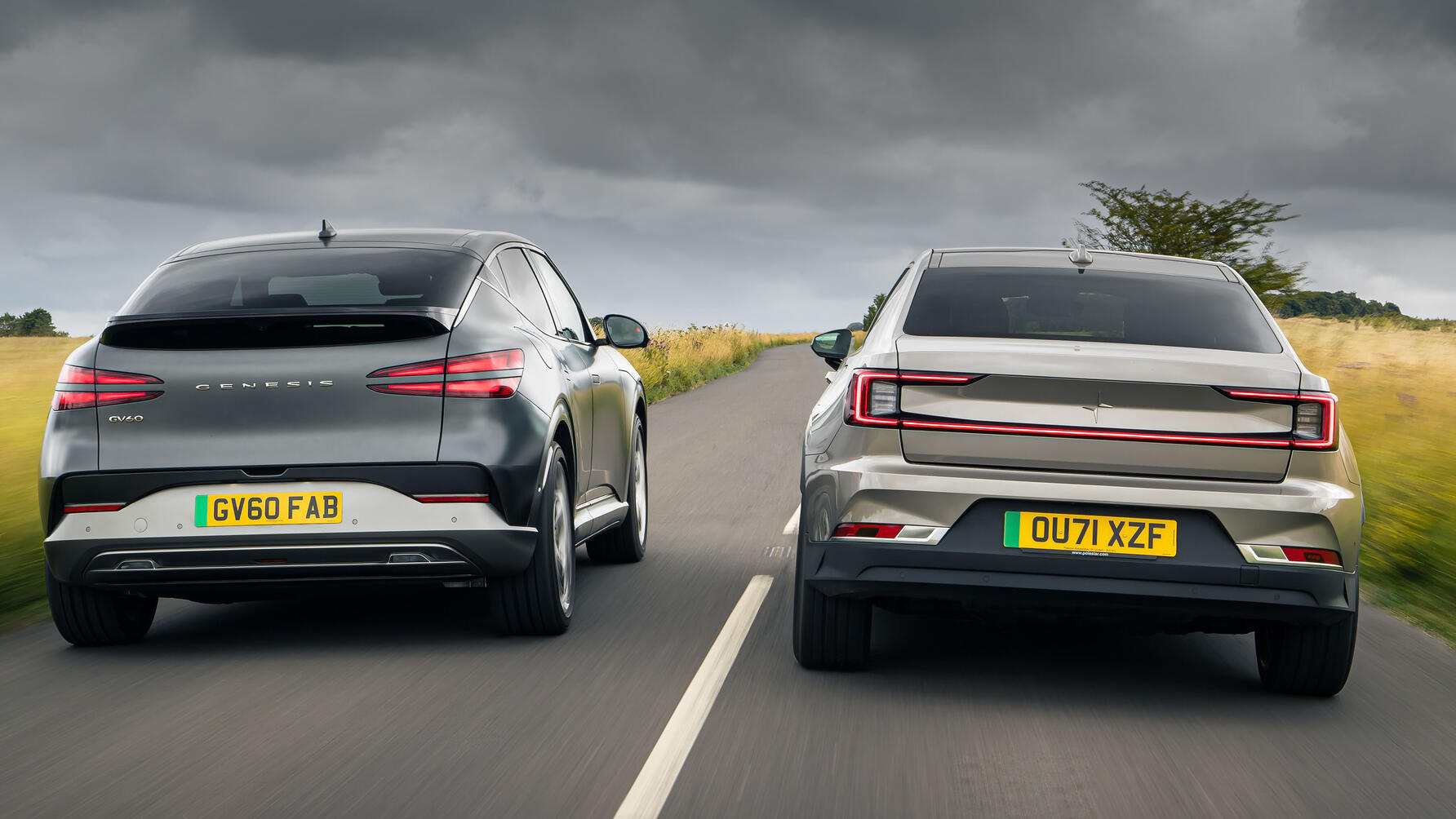