Richard Hammond on the Jaguar E-Type 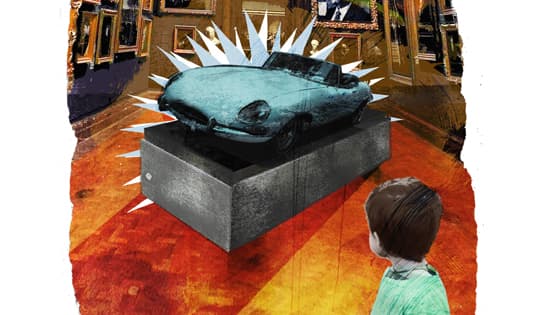 I've had a sort-out of my raggedy band of motors. Some have come, some have gone, others have rotted away, but among the newcomers there is one so beautiful that its siren call has lured me out into the rain to paddle across the yard and peer at it through a crack in the garage doors.

It's a pale blue 1962 Jaguar E-Type Roadster. It's the Mk1 with the 3.8-litre straight-six engine rather than the weighty and complicated V12 of the later versions that buggered up the balance and poise of the thing. And its beautiful lines are uncluttered by the bigger bumpers and bulging arches demanded by the Americans in its later life.

It's a car I've always adored. As a kid, on a trip with my parents to the local secondhand car dealer in Shirley to pick up our Allegro Estate, I saw an E-Type in the showroom. I was excited beyond belief when the dealer himself, catching sight of my plaintive little eight-year-old face, asked if I would like to sit in it. I squeaked something to the affirmative and he slotted me into the driver's seat. He then announced that I had to do it properly and needed to have a girl in there with me. I blushed, naturally, as he had just said ‘girl' and he encouraged his substantial secretary to climb in next to me.

"The E-Type has always been too much of an old biffer’s car; something for flat-cap wearers to talk about at the golf club"

Struggling to cope with a face now threatening to boil over entirely, I searched for something grown-up to say. I had seen a price sticker next to the E-Type and I supposed that talking about money might be just the ticket if I wanted to impress. "Why on earth would anyone buy that over there", and I pointed a skinny digit at some mundane modern piece of tin across the room, "when for the same money, you could have this?" The dealer snorted and barked out between laughs that the amount I had quoted wouldn't even pay for the engine on the E-Type. Clearly the sticker I had seen had fallen off a Hilman Imp or a Talbot Horizon. His dull brummie vowels gave the words an extra sneer, his secretary laughed and I pretty much died of embarrassment.

My love for the E-Type survived, but until now I had never considered actually owning one. There was never any denying their beauty, it leaps up and hits you in the face. Neither is there any particular issue with its performance. But it has always been too much of an old biffer's car; something for the adenoidally challenged flat-cap wearer to talk about through his beard at the golf club. And I sure as hell wasn't ready to sign up for that. But then something changed. Somebody somewhere, probably a fashionable magazine editor type, must have decided that the E-Type was no longer the preserve only of the flat-cap brigade and could be considered fair game for the most dashing of young blades about town.

It's an odd moment when that happens, when a car undergoes a subtle but fundamental shift in its social positioning and it's very hard to know when it's going to happen. The Rover P5 - a car I featured on TopGear five years ago as a seriously cool alternative to modern luxury cars - has somehow slid the wrong way and now can be driven only by middle-aged people wearing plastic belts or by nervous young geeks hoping desperately and futilely that their interesting and alternative choice of wheels will give them a chance of pulling. Same goes for the old Audi Quattro. An utterly brilliant car, a landmark in many ways, but drive one today and you'll look like exactly what you are... which is someone keen to have the things they couldn't have when they first saw them decades ago.  Why not have mid-life crisis tattooed on your face?

But the E-Type, overnight, dropped out of this unacceptable group and has found its rightful place on the wish-lists of genuine enthusiasts of beautiful, important cars. On my first drive in mine, I roared about Herefordshire, grinning as the six-pot crackled and banged through the twin tailpipes on the overrun. I almost fainted with pleasure as I strode back across the garage forecourt and admired its svelte, low-lying flanks amongst the suddenly flabby and ugly modern cars around it. I slipped back into the little leather bucket seat, fired up the glorious 3.8 and prepared to launch it into the traffic. A child smiled through the window of his family car, dreaming perhaps as I had done of staring down that long bonnet at the road ahead. I adjusted my flat cap and froze. I knew in that instant, that second, that no, cars don't change, we do. 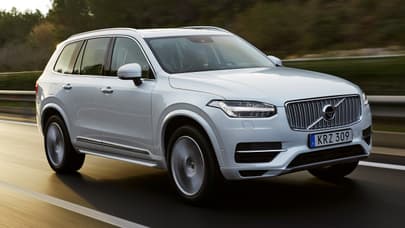