Sensible vs silly: who wins in the battle of the hot hatches? 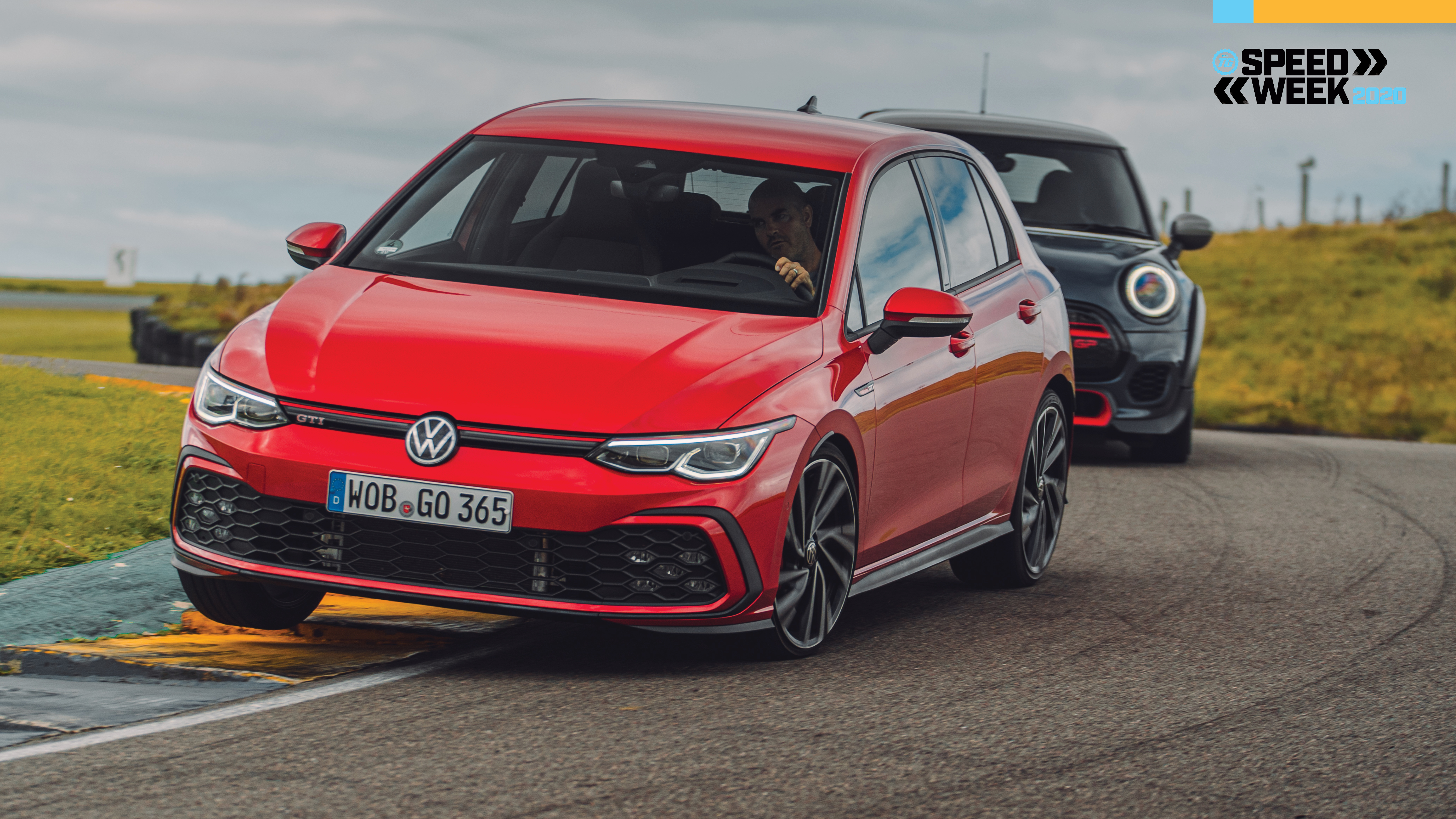 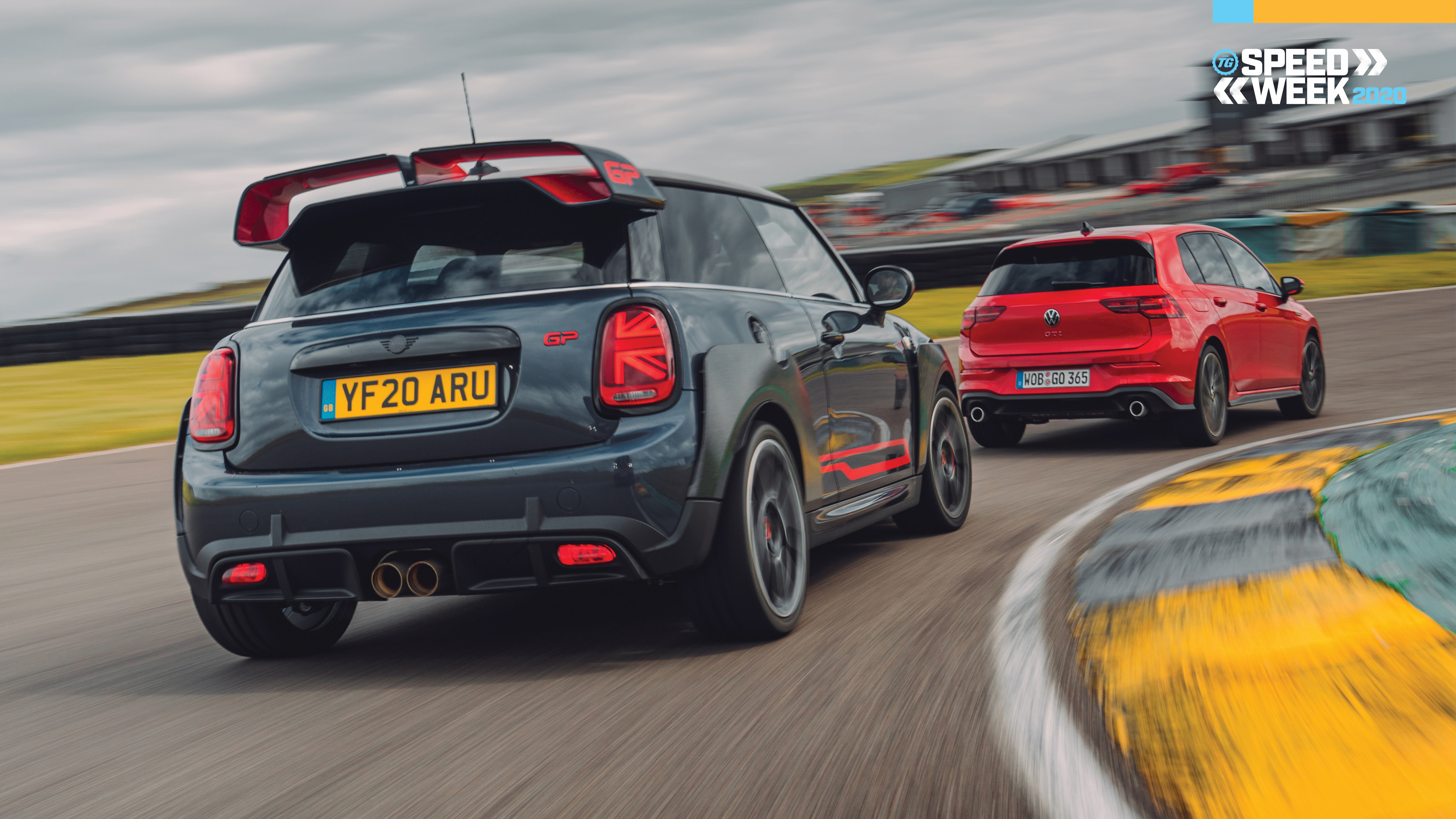 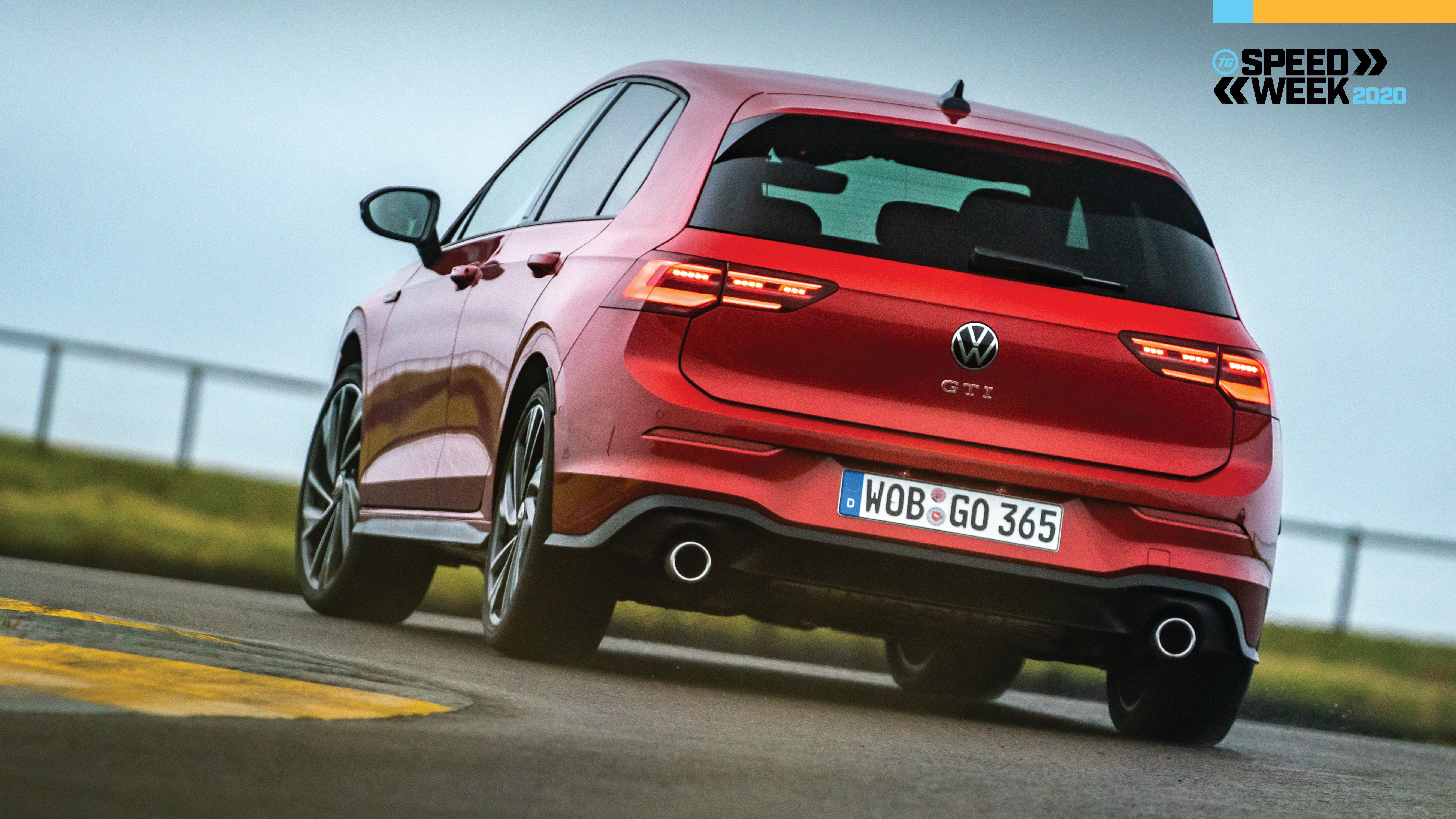 The circuit is open but moister than a Nigella Lawson sponge cake, 18 of the fastest and most exciting cars on the planet are ticking over in the pitlane and I have my choice of the keys. I’m drawn magnetically to the exotic stuff, but equally repelled by the absence of friction and a very real possibility of parking one in the Irish sea. My ego is screaming “GO BIG!” but my head takes the win as I drop into the familiar, squidgy embrace of the new Golf GTI’s tartan cloth. Must be getting old.

Let’s be honest, a Golf GTI in this company is as invisible as vegetables in our diet at Speed Week, even when it’s the brand new Mk8 GTI, fresh off the lorry from Germany… the first of its kind to arrive in the UK. In these conditions though, there’s sanctuary in familiarity, reassurance in knowing roughly how this new GTI is going to behave, and it won’t involve sudden power oversteer.

You see, the Golf GTI is the world’s least exciting, exciting car. That’s its job these days, to be the quintessential do-it-all family wagon with a bit of a rebellious streak, the classless performance car, the thinking man’s hot-hatch. Which is why VW hasn’t veered very far from the Mk7’s formula: same MQB platform, still front-wheel drive, 242bhp from a largely unchanged 2.0-litre turbo. We shan’t dwell too much on the new, infuriating buttonless interior (we’re here to drive after all, not listen to the radio... but for the record it’s a backwards step), or the fact that there’s a new face that doesn’t look amused, wider-set tailpipes and bigger GTI badges than before.

What we care about is whether it can punch above its spec sheet and toned-down styling… and, by George, it can. We’re conditioned in the age of the 400bhp+ hatch to assume 242bhp is somehow barely enough to rotate the wheels, but as I crest triple figures down the back straight, it feels fairly healthy to me. Same remote, rorty engine note as before, same superlight manual shift, same ability to handle a surprising amount of abuse on track. What’s new is stiffer suspension, especially at the rear to encourage a bit more movement when you lift off mid-corner, or turn in on the brakes. There’s no night and day revelation over the old one, but it does feel more agile, tauter, surprisingly up for it and whatever the new VDM system (a central brain to ensure all the electronic nets work in harmony) is doing underneath me, I’m cracking a smile and lobbing it around. Not so sensible now.

Did someone say sensible? The Mini GP blows raspberries in your general direction. It despises the word, presumably why its exterior is set to maximum silly. You can make your own mind up on the carbon-fibre arch spats and loop-the-loop rear wing, I shall simply report that when Chris Harris first clocked eyes on it in the pitlane, he remarked that it was “easily the worst looking car I’ve ever seen". To be fair, it was before his first coffee.

Track’s dry now, so this should be slap bang in the 302bhp GP’s wheelhouse, and man can this thing shift. Just a solid wall of linear shove all the way until you’re far too deep into a braking zone to make the corner and need all the run-off you can get. In corners it’s nonchalantly flat, on the exit its digs in hard, down the straight it’s a bullet. Yank the handbrake and it can take corners backwards… but there’s something missing.

The eight-speed automatic gearbox is an odd decision (a torque converter, not a twin-clutch) that gives the car a whiff of being led by the marketing department, not the engineers, and fails to keep up when you’re really on it. But there’s more to it than that. There’s little joy in the way the Mini drives, it bludgeons its way around the track, linking uneventful corner to uneventful corner, impressing but not tickling in the way the really great stuff always does. Bit bizzare really, given how fizzy previous-gen GPs have been and that the entire Mini brand trades so heavily on character.

A scalp for the GTI, then, but some definite sparkle missing from the new hot-hatch contingent so far this year – so often a rich seam of underdog overachievers. Unsurprisingly my ‘moment’ with the Golf comes away from the track. Tent obliterated by one of Anglesey’s ‘unsettled spells’ and all clothing soaked except the threads on my back, I cruise back to the deploy-in-case-of-emergency hotel room. Soothed by the glow of the Golf’s ambient lighting, cushioned by its sympathetic damping, enjoying the odd corner the road throws at me, but very much driving at seven-tenths. The GTI sweet spot.