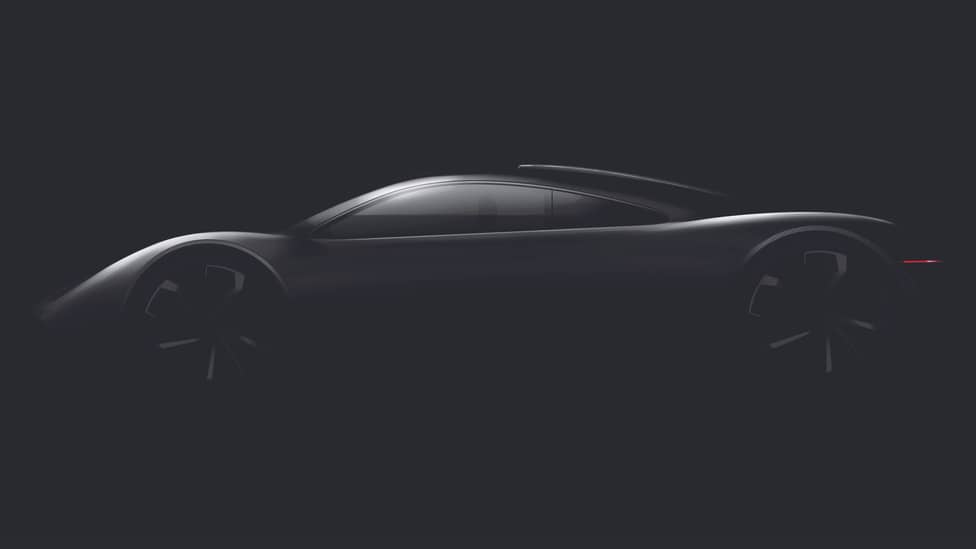 Gordon Murray is launching a new car company, and its first product will be a sports car that uses "the engineering principles" of the McLaren F1 he designed in the mid 1990s. He's released a drawing too.

He stresses it's meant "for real-world conditions". That means not too much power? He nods. We talk about the McLaren 720S, which I've just been driving, or the Ducati Panigale motorbike he had been considering but rejected – things that are too fast for the road. "You can never even use maximum revs on those 200 horsepower bikes. You'd be dead or in prison." he sighs.

"I just want to get back to real driving." Today's cars are "losing the plot on involvement." says Murray.

It won't have a hybrid powertrain. But he won't say much more. "We have a powertrain department here and we are working on a couple of very exciting options. They buck the current trends. Turbochargers? "I hope not." Can he do the new car at under 1000kg? "Oh yes. Yes." Is that sketch a realistic representation? "In proportions, yes. But we haven't really started yet. I never let the stylists near it until I have the design and package done."

As to those "principles" of the McLaren F1, he means obsessive attention to detail, light weight in all respects, use of the latest materials and technology, and "some of the most advanced aerodynamics yet seen on a road car". All in pursuit of most of all pure simple driving pleasure.

How does it compare with the TVR Griffith he's just designed? That's more powerful than his new car. A muscle car. His own car will be smaller, mid-engined, more pure.

And extremely light. The reason for that is bound up in the launch of his new car company, Gordon Murray Automotive. The car itself will go under the IGM brand. IGM is his initials, and the badge on the nose of the first car he ever designed and built, a two-seat race car in his native South Africa 50 years ago.

You want obsessive attention to detail? For that home-built special, made from when he was 15 to 17, he made his own pistons and other engine internals, turning a simple pushrod 1100cc engine into an 8000rpm screamer. He made not only the frame, but his own seats, even his own steering wheel. The result was lighter but stiffer than Colin Chapman's Lotus Seven.

Gordon Murray Automotive has been set up – a sister company to the existing Gordon Murray Design – to develop and exploit his new iStream Superlight construction. You'll know about his existing iStream technique. It uses a steel frame with attachment points for the main components of powertrain and chassis, and this frame is strengthened by bonded composite panels. This is what's used for the new TVR Griffith, the composites in that case being carbonfibre.

The new iteration of the process uses extruded aluminium instead of steel for the metal frame. Aluminium actually isn't strong in shear, so most aluminium car structures need a lot of it. "So pure aluminium cars aren't much lighter than conventional steel ones," Murray says. His solution is to bond low-cost carbonfibre sandwich panels to the aluminium extrusions. That adds vital shear and buckling strength.

"This makes a structure 35 per cent lighter than our first iStream, and half the weight of conventional steel or aluminium." And lighter bodies allow lighter suspensions and lighter engines.

"And it's the same cost as steel because we use recycled carbonfibre," he claims.

He says more than half the iStream cars Gordon Murray Design is developing for car companies worldwide (many are startups) are electric. "Light weight is vital for electric cars. Cut the weight and you cut the amount of battery you need. And the battery is half the cost of an EV."

The new Gordon Murray Automotive will build cars. "But I don't want to make many. I don't want to be a McLaren," he says. GMA would design a platform, make a few examples of a car, and also sell the platform or adaptations of it (it's easy to change dimensions of an iStream structure) to other manufacturers so they can build their own cars.

The first one new IGM sports car, isn't only a high-end advert for the process but sounds like an awesome car in itself.

When will we know more? "I'm relaxed on timing." Serious development starts in spring, after the new building is kitted out.