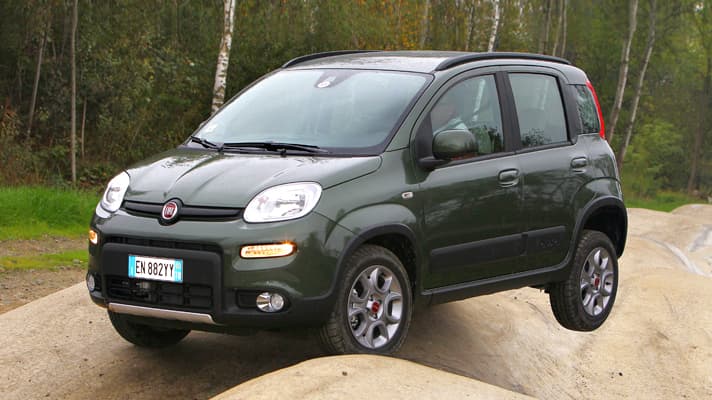 Have we taken leave of our senses, putting the Panda above the Range Rover as Top Gear's SUV of the Year? No, because if something isn't used, it might as well be useless. We're surely not alone in predicting that you're more likely to go knocking about in the boondocks in a Panda than you would in a precious new Range Rover. The stakes are lower.

And let's not patronise the Panda by saying it's ‘surprisingly' good off-road. It's good off-road. End of. Sure, it might not have fancy locking diffs, but there's a clever electronic traction system, ample ground clearance and a low first gear. Traction on slopes is remarkable, partly because the tyres are suitable and partly because the Panda is light enough that there isn't much gravitational pull to defy. And it's so compact it'll weave between trees and rocky obstacles that defeat the galumphing full-size off-roaders.

All of which is why, somewhere upthe rocky, dusty or snowy tracks that worm their way closest to the top of almost every mountain in Europe, you'll find either a first- or a second-generation Panda 4x4, and not far away the gnarled owner and very likely his dog. We can't for the life of us see why the third one won't continue that vital role in the rural social fabric.

But it's got other talents. Long motorway hauls aren't torture if you opt for the six-speed TwinAir version. That said, we're not pretending that if you had to drive from Kensington to meet the Royals for a spot of skiing in Klosters, you wouldn't be better off in a Range Rover or Cayenne or whatever. Of course you would.

But on the other hand, if it's just about driving around within Kensington, we'd take the Panda. It's scootable, squeezable, cheeky. It also rides well, and glides so gently over humps it wouldn't even wake an actual sleeping policeman. And, to our mind, there's a coolness that comes from not trying too hard.