Bugatti has broken the 300mph barrier 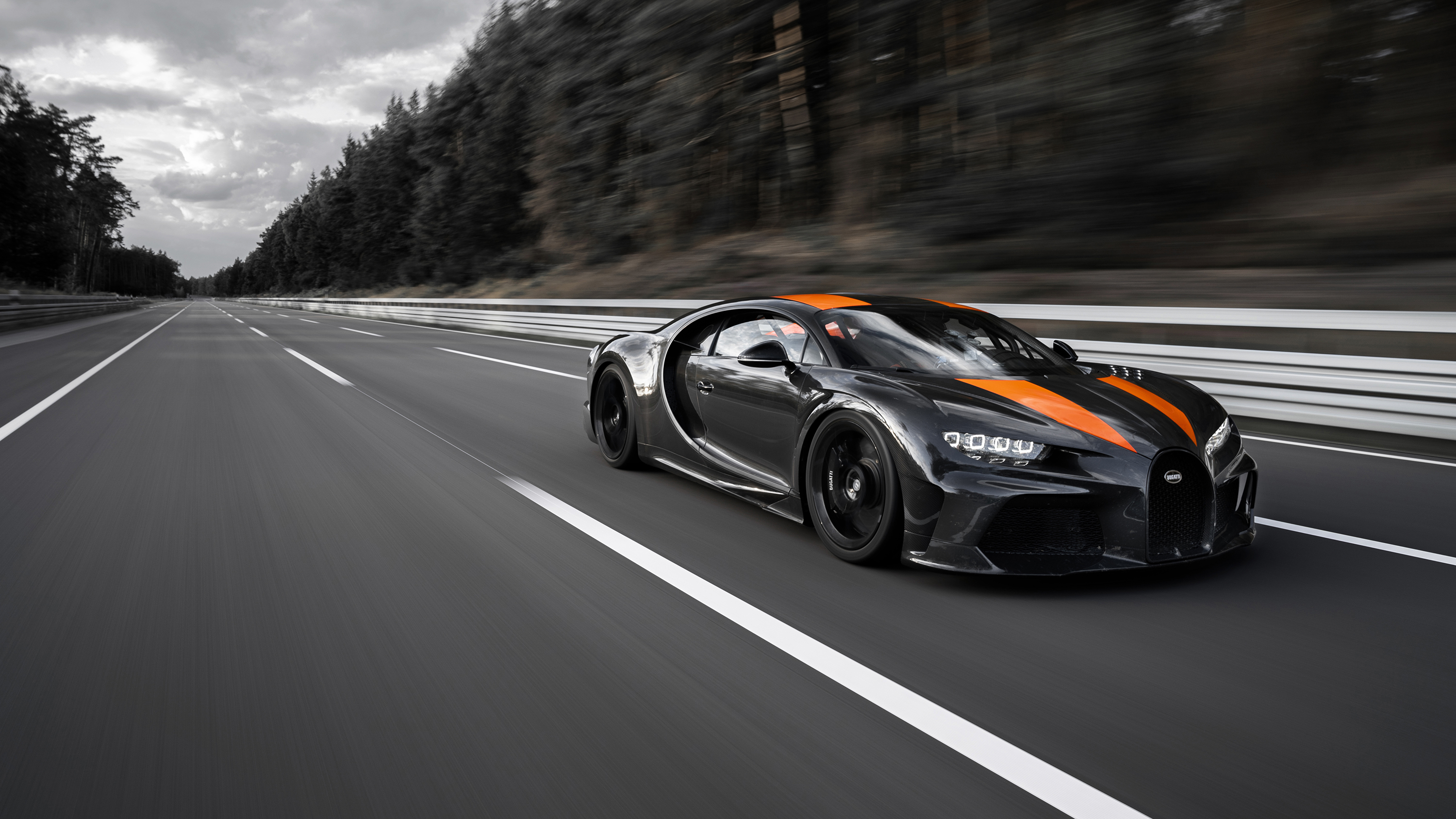 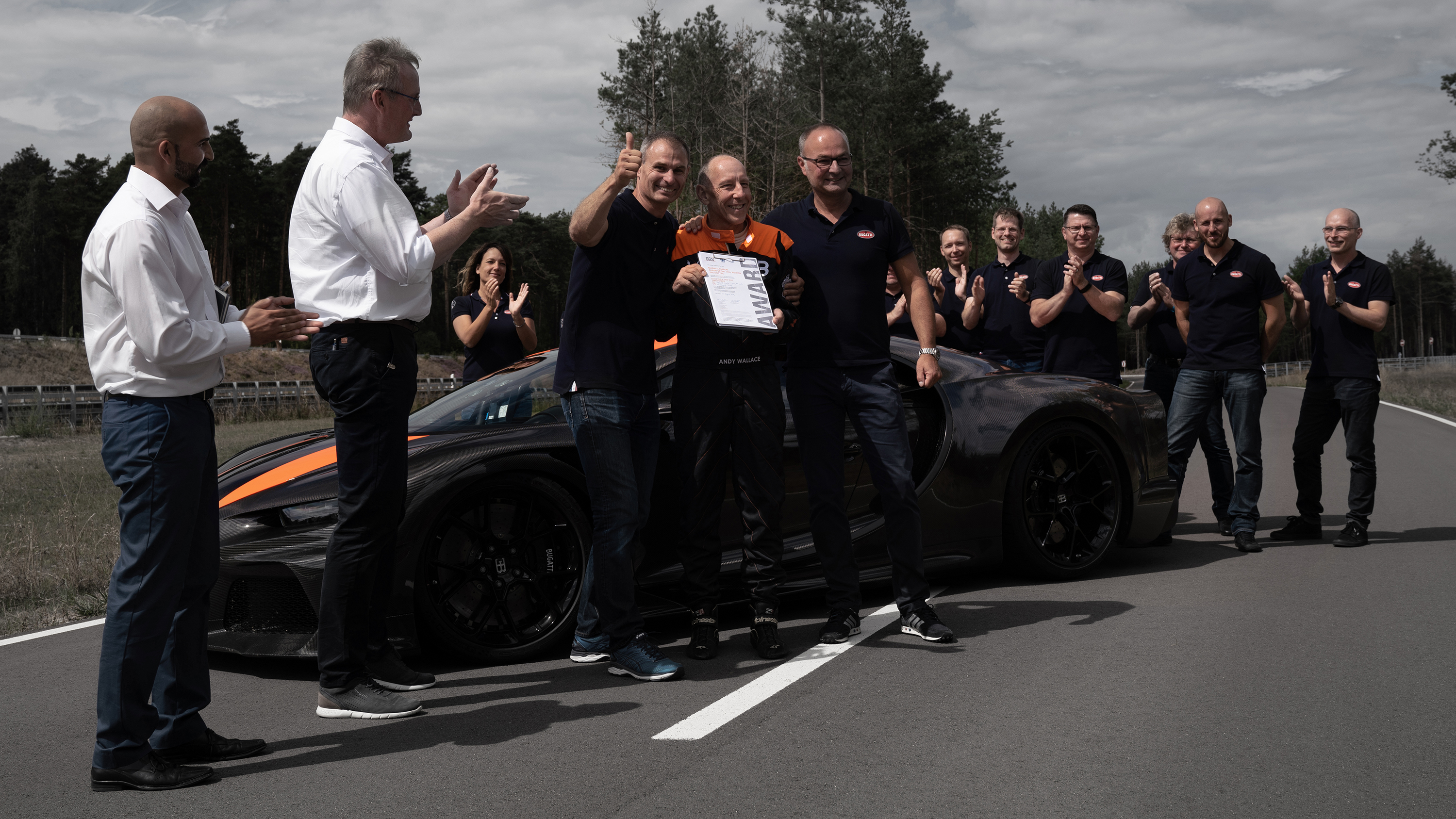 Top Gear can exclusively reveal that Bugatti has smashed through the 300mph barrier. On 2 August 2019, Andy Wallace hit a vmax of 304.77mph in a go-faster Chiron at Ehra-Lessien, becoming the first hypercar to break 300mph.

Over the past six months, a team of engineers from Bugatti, Michelin and chassis wizards Dallara set about creating a car that can break the 300mph barrier. And what a car. This is no ordinary Chiron. First, there’s the way it looks. At 25cm longer, this Chiron has an elegant but menacing presence. Its purposeful intent is amplified by laser-controlled ride height, set significantly lower to reduce drag, giving the impression that the car is melting into the tarmac.

At the rear, the long tail with its reduced cross section (to aid aero and minimise drag) is punctuated by a pair of over-and-under shotgun tail-pipes (first seen on the Centodieci limited special). Objectively, these project the exhaust emissions as far from the rear as possible to reduce their effect on drag and aero. Subjectively, they add even more drama and a whole new menace and sense of purpose to the Chiron aesthetic. 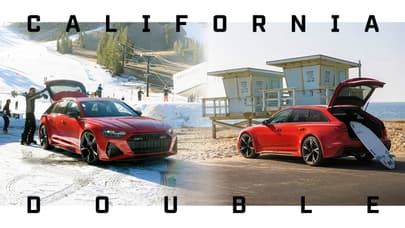 To reduce drag, the rear wing and airbrake have been removed and replaced with a static unit recessed into the tail. Somehow the design team has managed to incorporate the demands for low drag and high-speed stability, while improving aesthetics to the extent that when you look at the regular car, it looks stumpy in comparison.

“The biggest challenge is to get the overall package right, not only design, not only aerodynamics, not only engine, not only tyres. It’s to get everything together and working in one car,” says Frank Heyl, the man with the most outrageous title at Bugatti – master of arts, head of exterior design.

Inside, the high-speed Chiron has been stripped of a passenger seat, replaced with myriad computer systems. There’s a full roll cage and a safety seat for the driver, and any number of visible and invisible weight-saving measures have been deployed.

Given speed is driven by two factors – aerodynamic efficiency and power – the engine powering the Chiron is rather special too. The 8.0-litre, quad-turbo W16 unit, nicknamed Thor, delivers 1,578bhp. In a testament to Bugatti’s engineering, the gearbox remains standard – as does the all-wheel-drive system.

“Bugatti has once again shown what it’s capable of. With this new record of the Chiron we enter again uncharted territory. Never before has a series manufacturer reached this high speed,” says Stephan Winkelmann, President of Bugatti. “Our goal was to be the first manufacturer ever to reach the magic 300mph mark. We have now achieved this – making ourselves, the entire team and myself, incredibly proud.” With this record, Bugatti will also withdraw from the competition to produce the fastest serial production cars. “We have shown several times that we build the fastest cars in the world. In future we will focus on other areas,” says Winkelmann.

The 300mph project will inevitably result in a production Super Sport version of the Chiron (even if Bugatti refuses to confirm it as yet) and future generations of the Chiron, each improved by the lessons learned breaking the 300mph barrier. But what will this incredible achievement do for the likes of Koenigsegg and Hennessey? Well, we’ll have to wait and see. But there’s a new watermark for going fast, everybody. And it’s really bloody fast.