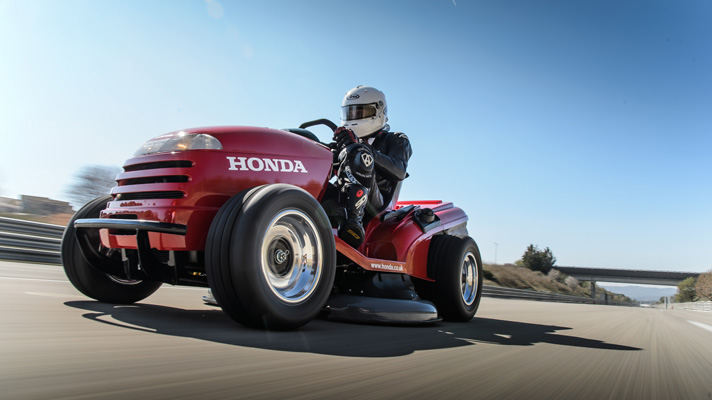 Last summer, as you may remember, Honda built the ultimate grass cutter, a mower with a potential top speed of 130mph. And while Top Gear got Groundskeeper Stiggie to test it out on our annual Speed Week-fest, as the thought of taming the beast scared the rest of us witless

But it did get us thinking - could we actually make it go 130mph? And if so, would the people at Guinness come along to verify the record? The answer to the second question was yes, because, as it turns out, the previous official record was 87mph. Guinness agreed to verify our attempt, and - crucially - check that we mowed some grass. Because, pesky sticklers that the officiators at Guinness are, they insist that a mower must be able to cut actually cut grass. Pedants.

Which is how we find ourselves at a top secret test track in Spain (The Stig was busy hibernating), not-at-all-ready and very much scared about what might happen next.

Lining up on the 2km straight, with the mower purring like a short-tempered lion beneath me, and both of us aiming for the far side of 100mph, sharpens the mind a tad. Will either of us actually make it? Will a tyre blow? Will the cutting deck get in the way? Should I have scratched that annoying itch before donning all the safety kit?

Accelerate away and the mower is stable. This bodes well. Keep accelerating, up through the gears - second, third, fourth - and the Mean Mower stays true. No wobbles, no drama. Might as well keep going then. Fifth, sixth. Hunker down in a Donkey Kong-style pose, desperately trying to minimise drag as much as possible.

Really try to crush the accelerator pedal into the floorboards, maximising the power. Spy the first timing beam, then the second one 100 metres later. Relief washes over that we've at least finished a run - I've no idea of the speed but survival is just as important. Now for the return run because Guinness insists on an average of two runs within the hour.

At the end of it all, I'm sat at the far end of the runway, contemplating survival but with no idea of any speeds. It certainly felt fast, motorway fast. But an actual speed? That comes through on the radio, blasted into my ears in a haze of static. "Top Gear. Krrccchh. 116.575mph average. You smashed it."

Check out the video of the record run above, and read this month's brand new Top Gear magazine for the full story.