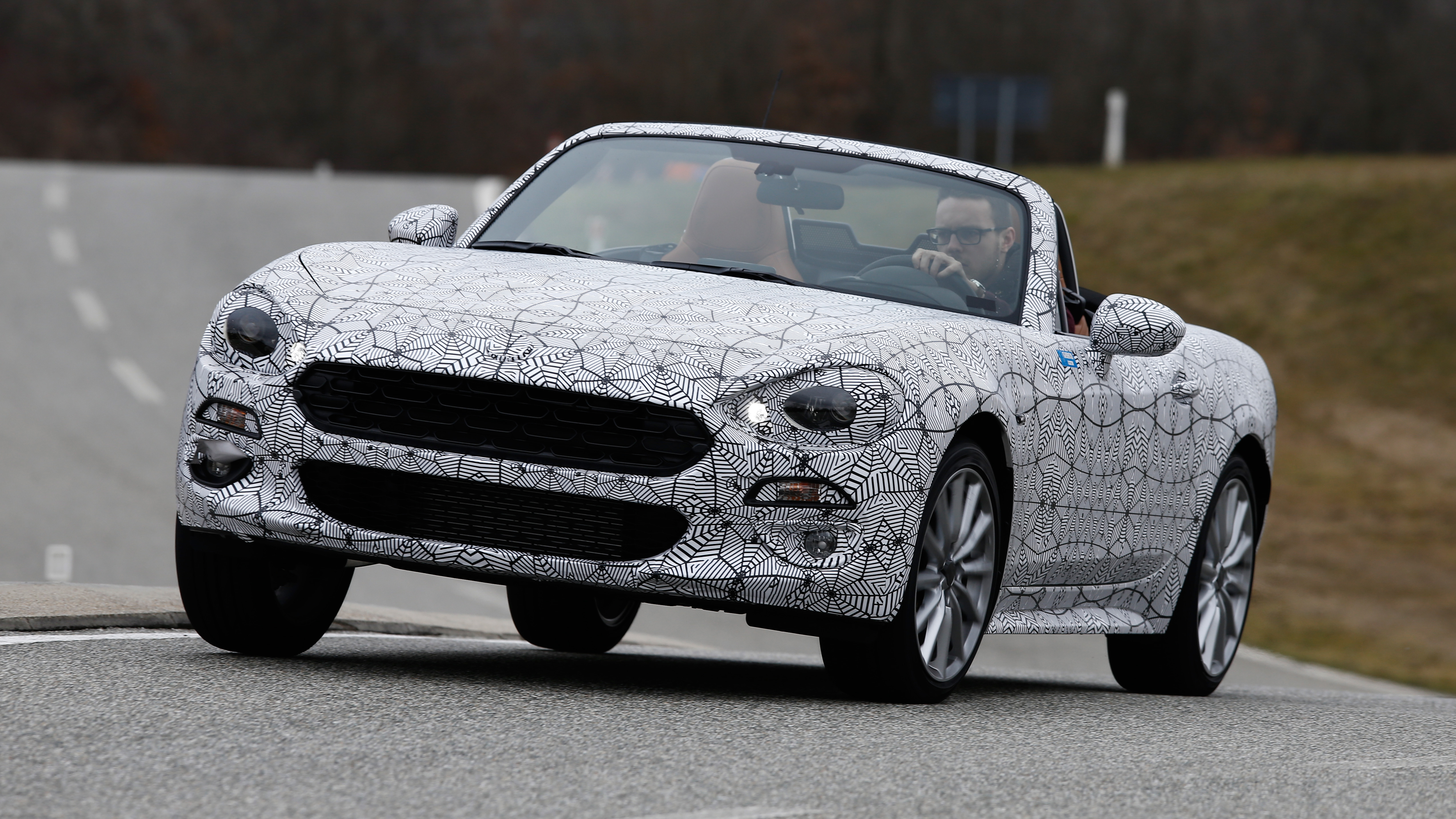 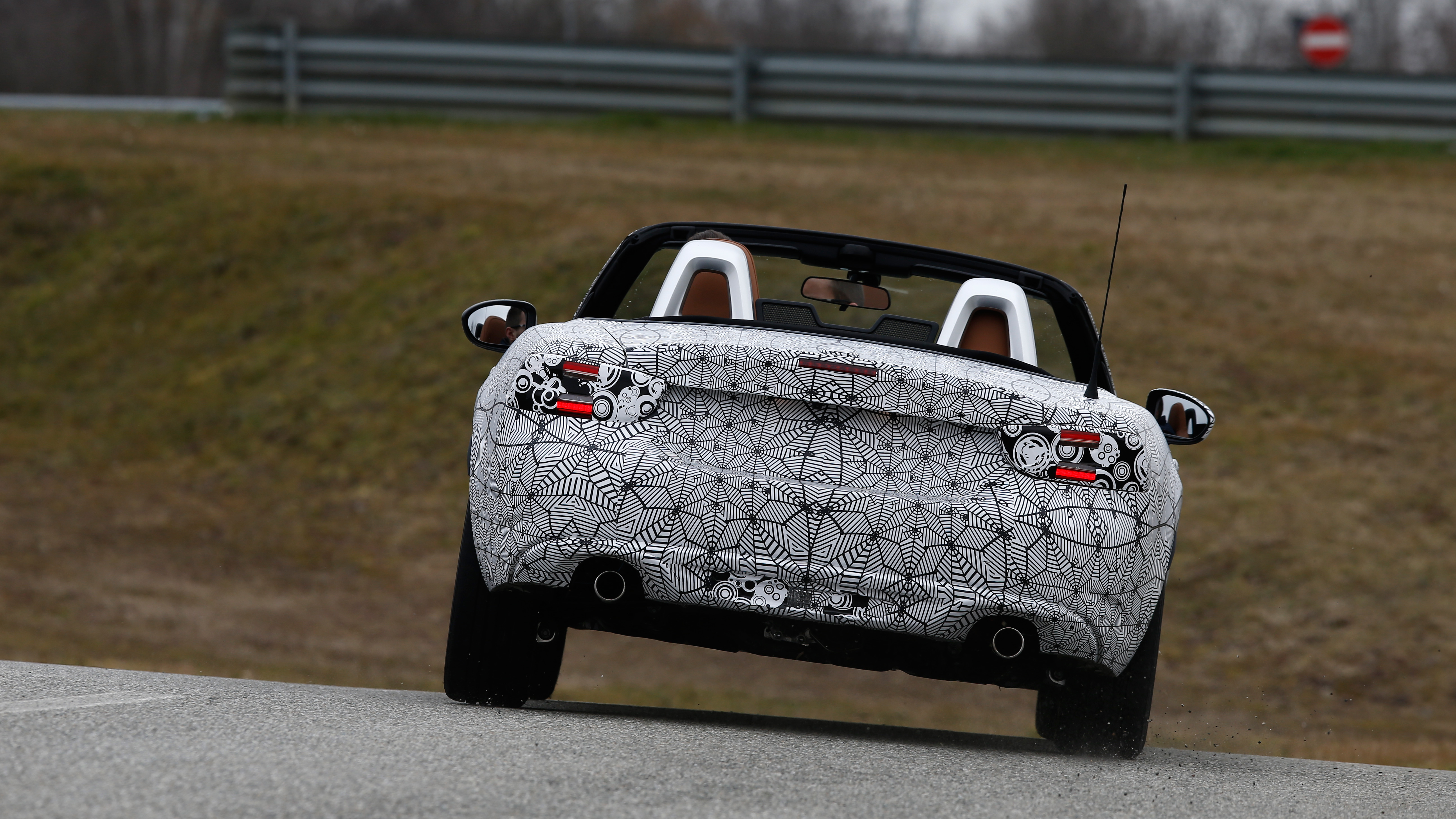 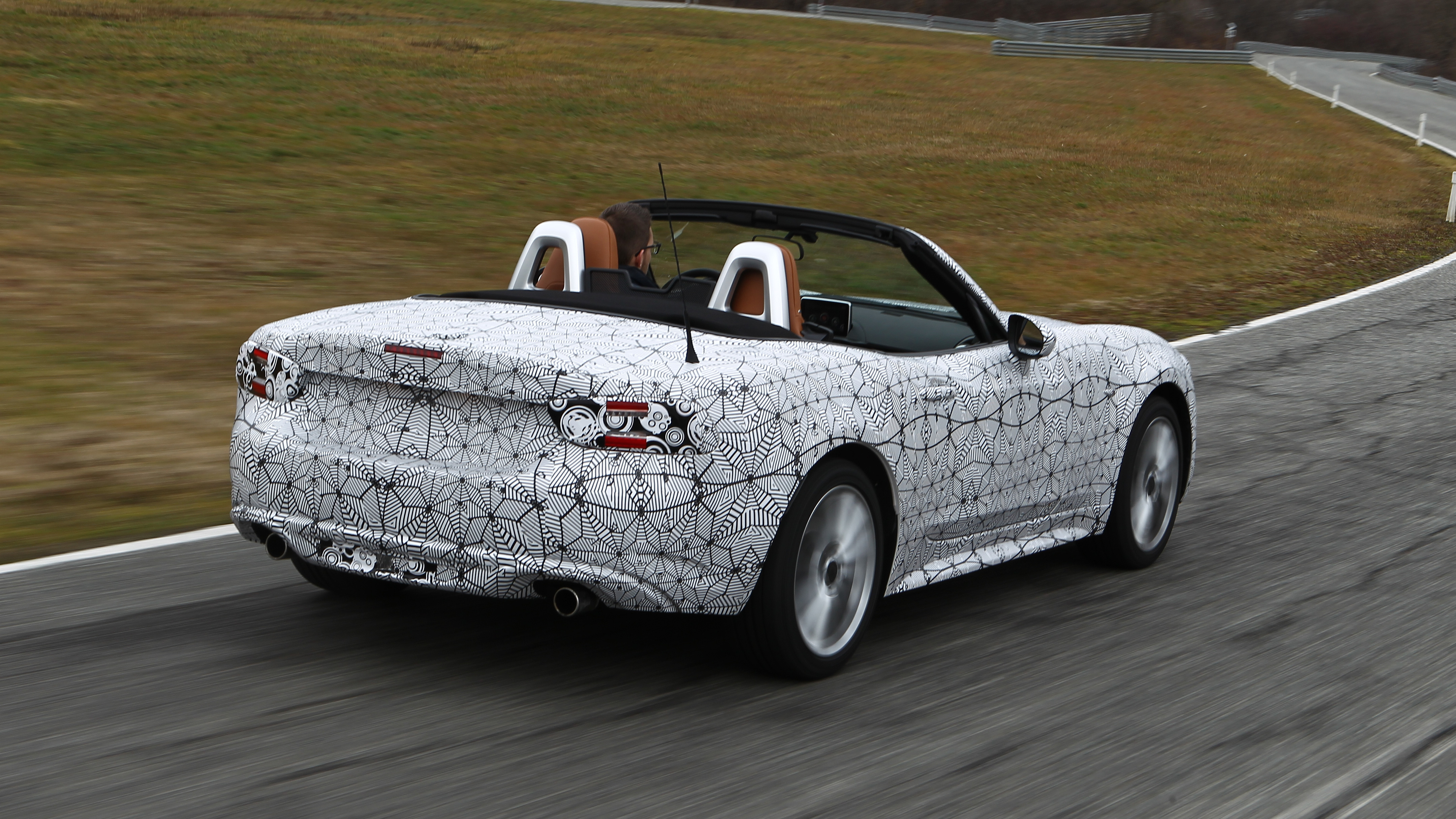 Ah yes, the two-seat, rear-drive sports car that’s based on the Mazda MX-5 and was originally going to be an Alfa Romeo, right?

The very same. And after a typically leisurely Italian meander to market, the truth is, it still isn’t ready yet. Not quite. We know you’ve already seen it, but the car I’m driving is strictly a prototype, 95 per cent finished, and is still coated in the spider-web disguise wrap. It looks like Peter Parker’s just driven it out of Comicon. Oh dear.

Not that you’ll find us complaining – the Spider’s part Dodge Viper, part Ford Thunderbird, part Chrysler Crossfire mash-up styling wasn’t exactly met with universal approval when we first saw it in November 2015. So if you don’t mind, we’ll concentrate on the driving part here.

The first thing you need to know is the Fiat is heavier than the flyweight MX-5 on which it’s based. Thanks to a longer front overhang and larger derrière to open up an extra 10 litres of boot space, the 124 is larger and consequently 50kg heavier than a 2.0-litre MX-5.

The second thing you need to know is the 124 has more torque to shift its extra bulk around. The only engine choice right now is a 1.4-litre turbo motor from the Alfa Romeo Giulietta. It develops 138bhp, putting it smack in the middle (what a coincidence…) of the 129bhp 1.5-litre MX-5, and the 2.0-litre model’s 158bhp.

Instead of power, Fiat’s looked for Mazda-busting torque. The 178lb ft of turbo thrust dropkicks both of the Japanese car’s naturally aspirated engines into touch, and it’s on tap from an accessible if not outright-low 2250rpm.

Does it feel quicker?

Yes, lots. Not hot hatch quick, not gale-force boosty, but having a turbo on board means the 124 gets into its stride way, way earlier than even the 2.0-litre MX-5. The turbo comes on stream nice and progressively, without dumping all of its torque in one clumsy lump, and pushes the 124 along at a brisk lick.

There’s a breath of turbo whistle, but nothing too uncouth – in fact the whole motor sounds rather flat compared to the fruitiness of an Abarth 500. The faster versions will be more musical and naughty, we’re promised. Still, it revs cleanly and pulls to 7000rpm. Well, Fiat says it officially revs to 6500rpm, but perhaps this pre-production test car was a bit sketchy on that. The needle definitely goes around to seven.

What I can’t tell you is official numbers, because Fiat isn’t disclosing them yet. I’d reckon on around eight seconds to 62mph, maybe a high seven, and a 120mph top speed. Who cares? It’s not a numbers car, and it feels swift enough.

And what about the delightful MX-5 gearshift? And the softly-sprung, chuckable handling? Has that been lost in translation?

One thing at a time. A great gearbox is one of the critical pieces of the sports car puzzle, and letting Fiat copy Mazda’s homework is a big plus for the 124. It’s got longer ratios than the MX-5 because there’s so much more torque, and the mechanism is supposedly exactly the same, but it doesn’t feel as magnetically slick. It’s still a good gearbox, make no mistake, but not quite as precise as the Mazda’s – a bit heavier, a mite clunkier. Hopefully that’s a mood Fiat can coax out of the Spider before it’s put on sale this summer.

The handling, meanwhile, is good news. Fiat wanted a stiffer chassis because its engineers weren’t impressed with the MX-5’s body roll, so the 124 rides on new springs, retuned dampers and a stiffer anti-roll bar. That’s teamed with slightly heavier electric power steering for the less flyweight, more composed behaviour they were after.

And the bottom line is, it’s a fun, friendly chassis. It rolls less on turn-in, so there’s less of the sense you get in the MX-5 that the front end sometimes catches the back asleep if you chuck it into a bend. It’s still not too fond of big rises and compressions, where the car gets broadsided with vertigo and feels a bit floaty and wallowy, but for the people it’s aimed at – roadster fans first, and sporty drivers second - the compromise between comfort and handling is really nicely judged. Like with the engine, and the styling, you can spot where the chassis’s state of mind has been watered down a notch, and how it ought to make a good base for a hot Abarth Spider with, say, 180bhp… 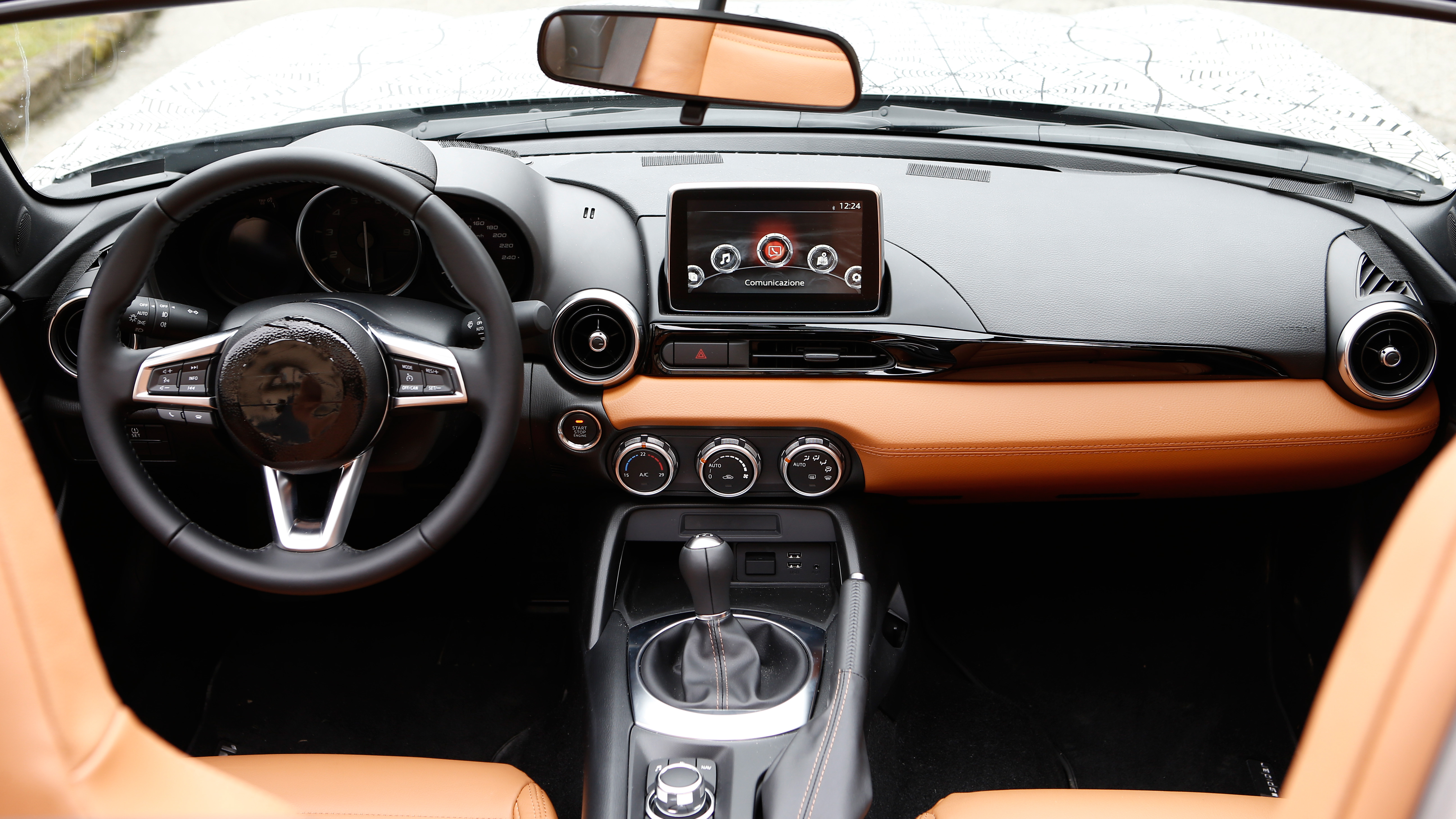 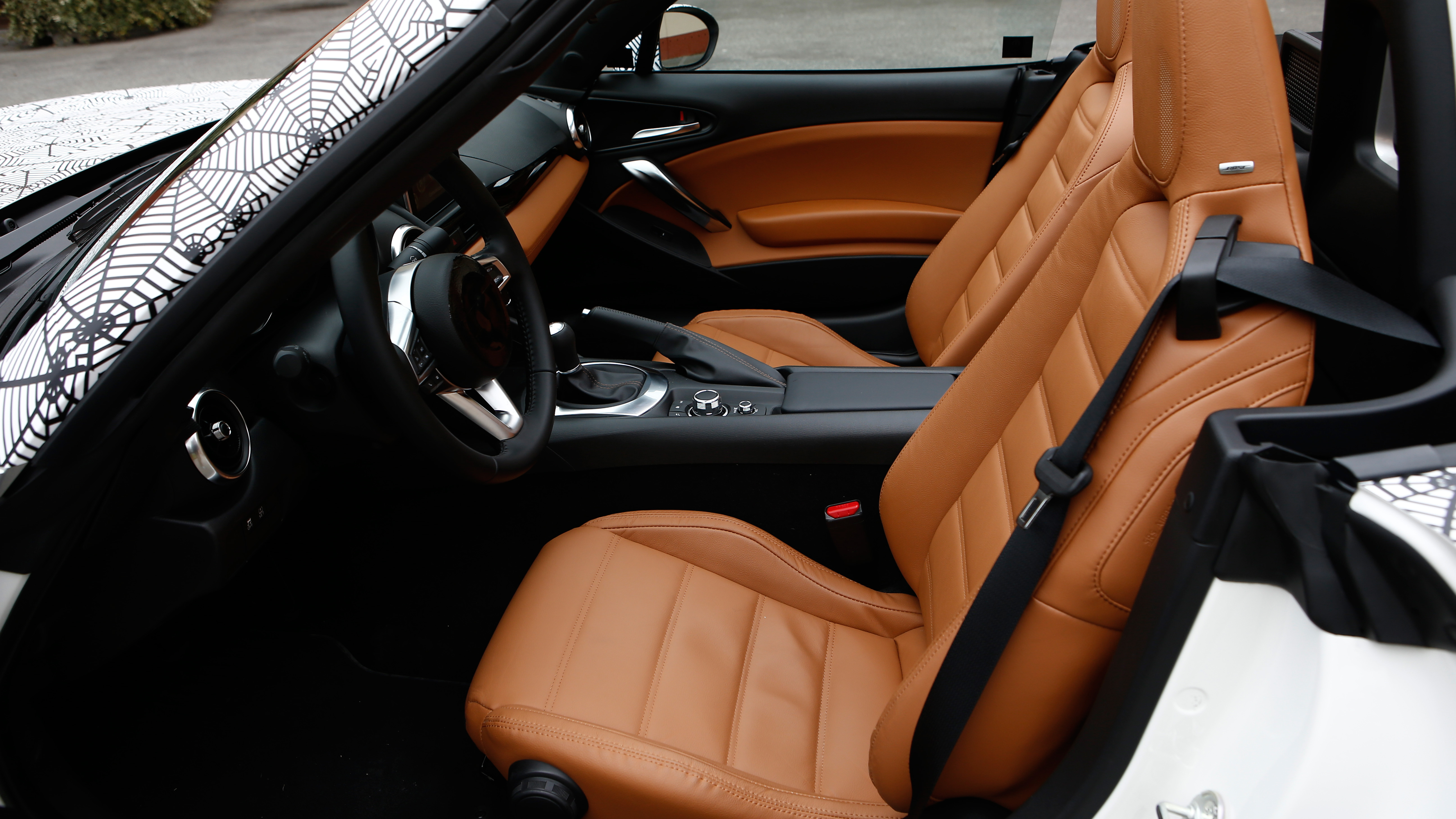 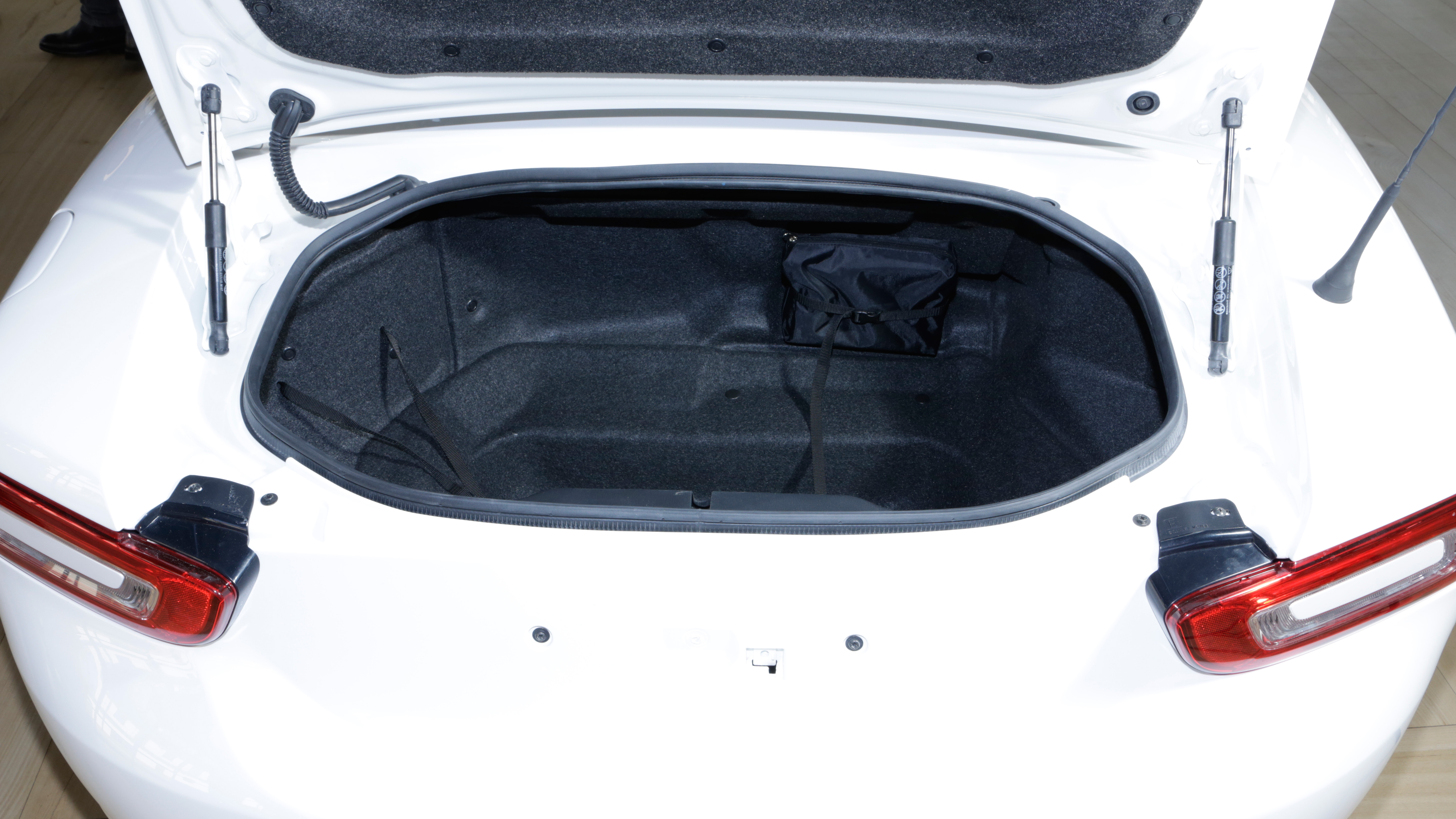 Is it a secret drift monster?

No, mostly because it has an open differential, not a limited-slip one. So, if you plant the throttle in a tight bend, the car just wants to spin up the inside wheel. The Abarth, we’re told, will get a proper diff.

But, because there’s so much more low-down torque, I’d wager this is a more throttle-adjustable car than an LSD-equipped Mazda. You don’t need to get the body weight swinging around on the suspension to get the car sliding – just ping the boost in a low gear, and the turboboost will kick the car slightly sideways. Not Ken Block-style, but enough to feel the car shuffle under the seat of your trousers and feel alive. The Spider is a cracking seven-tenths car. Drive it quickly, rather than mad-as-a-badger flat out, and it’s an entertainingly little roadster – and a different character to the MX-5.

Yup, it’s a good car. Frankly, if Fiat had screwed up Mazda MX-5 ingredients, it’d have been a pretty spectacular own-goal, but they haven’t and instead it’s an interesting alternative. The extra flashes of chrome inside do lift the cabin ambience, it’s got a bigger boot, a butcher look, and essentially a bigger punch under the bonnet.

Which one you want will probably come down to price (the first Spiders are expected to match high-spec MX-5s at just under £20k), which one you like the look of more, and if you prefer crisp revvy engines or forced induction woosh. But it’s a choice worth having, which isn’t always the case when two car companies cook up rival models from the same ingredients.

As you might be able to tell from the pictures, it started to rain as I was zipping around the Balocco proving ground’s road course in the 124. As a result, I can report the speed at which you need to travel to deflect all rain over the cockpit is exactly 23.8mph. If you fancy one of these and live in Britain, that might be the most valuable fact of them all.